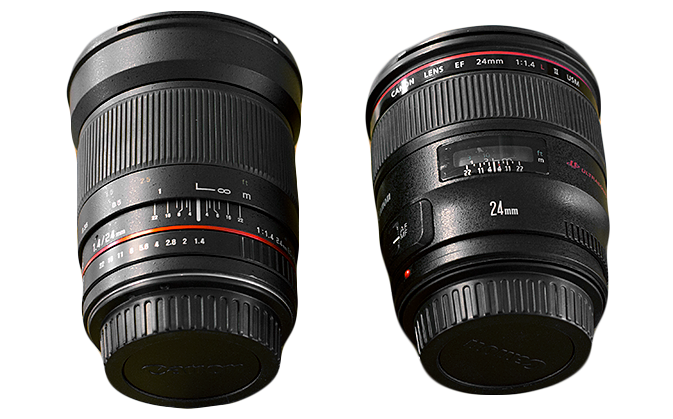 Samyang is also branded with Bower and Rokinon. Same lens regardless of the name on it.  All made by Samyang.

Like the 14 Samyang vs Canon, they are of similar size.  Canon could be said to have the better build.  The Samyang is sturdy and fine all the same though.  I wouldn't be concerned with the build aspect.  You can pretty much buy 3 of the Samyang 24s for 1 Canon.

The Samyang doesn't have autofocus, which isn't a big deal at 24mm. I never use autofocus anyway, unless I'm telephoto shooting birds.

The aperture on the Samyang goes from F1.4 right to F2, so the first jump is a full stop.  Then the next are 1/2 stops.

Above is an example using the same exact white balance settings and no adjustments done in RAW conversion otherwise.  I believe it was at F5.6.  Canon on left, Samyang on the right.  As you can see as far as color balance and temp they are damn near identical.  Overall they are damn near identical.  If anything the Samyang seems to have a contrast edge.

Evidently I was in a hurry with the 24s.  As I set up this framing for them, moving back from 14mm I didn't square up the center of the lens to that center point.  So they are shot a hair left of dead on.  They both were shot the same though and you should be able to get the idea.  The Samyang has just a slight bit more distortion bulge.  I generally wouldn't even bother fixing it with a profile in RAW conversion.  Though may as well since it is easy enough.  Really not an issue though, either lens.

Also on this I'm noticing the Canon 24L II doing a little of what the Zeiss 21 does and that is go a little blue towards the edge.  Least the right edge. 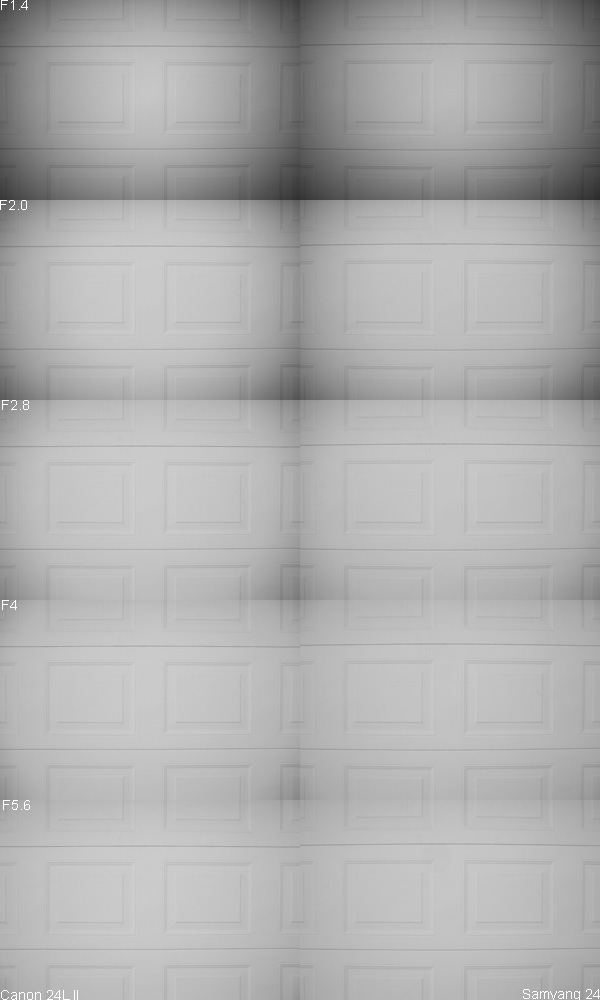 Vignetting is similar with both lenses, though Samyang clearly has a small edge.  Not a problem going with F1.4 at night.  Day scenes I'd probably go with F2.8 or more.  They seem similar enough to one another to me to not be a deciding factor at all.  Both shot at identical settings.

I discovered the Samyang may have something slightly decentered.  Left side was sharper on my test images.  I looked more into it today and it matters where it is focused at.  It may not even be decentered but just how it works.  If I put something in the left corner and live view 10x focus, once it is sharp the focus line is just left of the infinity marker.  If I swap corners then to get it sharp the focus ends up just right of the infinity line.  So really one should be splitting those two.  I included both corners below to show the difference.  It doesn't seem to have an affect on coma though. 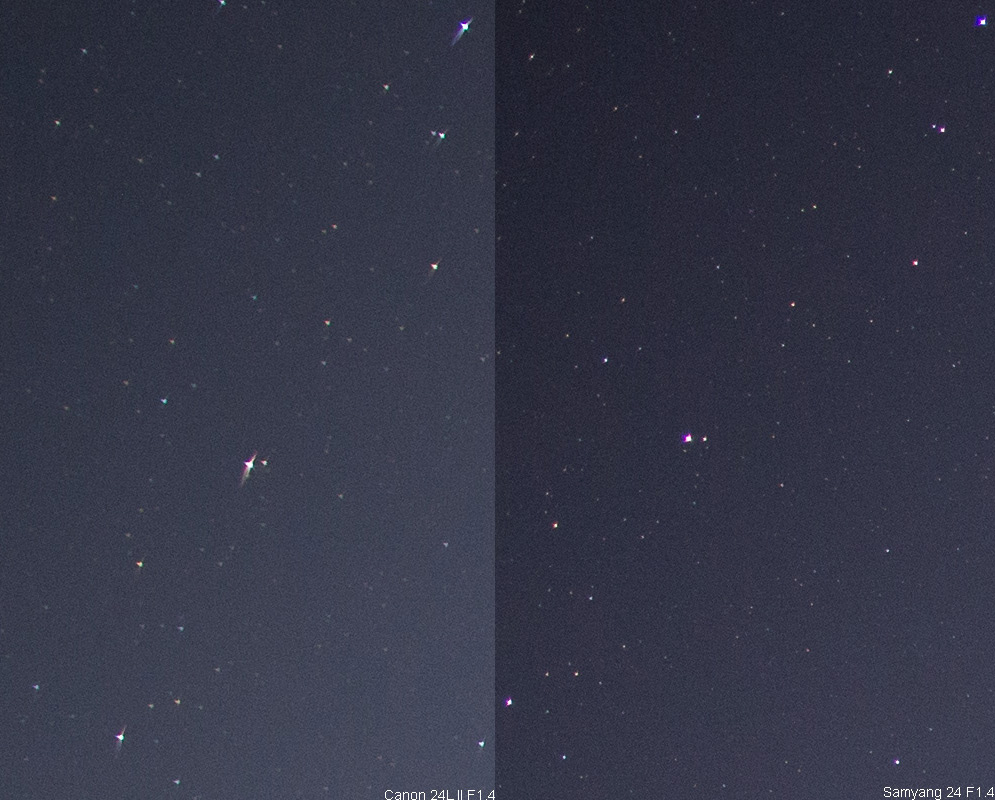 I cropped to the same stars, but the Samyang framing has those stars a good bit further out towards the corner than the Canon.  So really I think that nixes the left/right focus favoring deal on the Samyang.  The Canon just absolutely sucks out there regardless and again, it's not even all the way out there.  The side the focus is favoring on the Samyang ends up simply ridiculously sharp.  It's F1.4 corners for crying out loud.  You should be able to find where those brighter stars are in the full image examples.  The ones going from upper right to lower left angle.  In upper left corner, with Samyang further out. 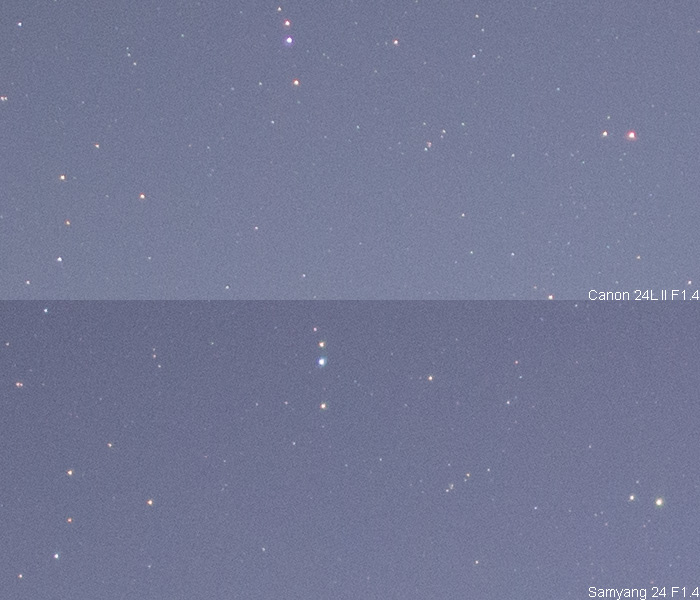 They are rather identical in the middle at F1.4.  That's damn good for F1.4.  Humorous the Samyang is 1/3rd the cost and really better overall. 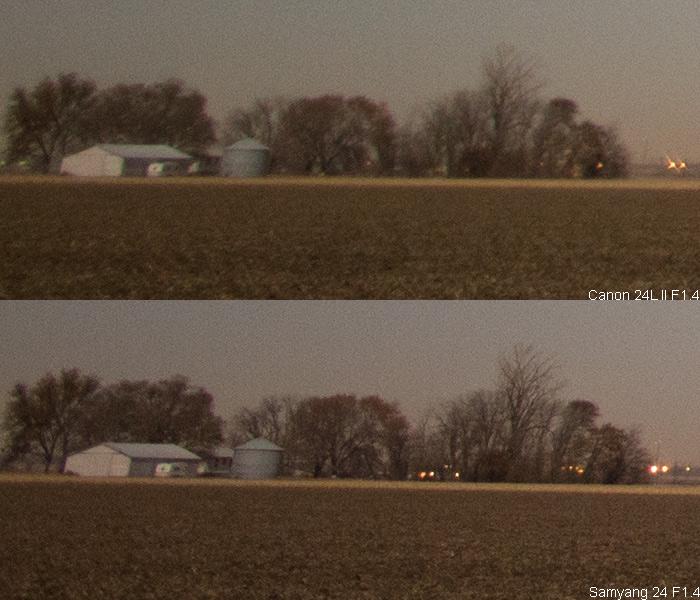 It's mind boggling the Samyang is doing that at F1.4 in the lower left corner.  I just need to find out what happens when I fix any decentering that is going on or not going on.  Like whatever is off shifts the better focus to either side, depending on just exactly where it is set.  I think one could probably just use their imagination and take some of this sharpness away and hand it over to the right side that is lacking.  I don't know if that gets fixed, if that means both sides end up this good or what.  But even with this issue there is a point to make, using the bad side below. 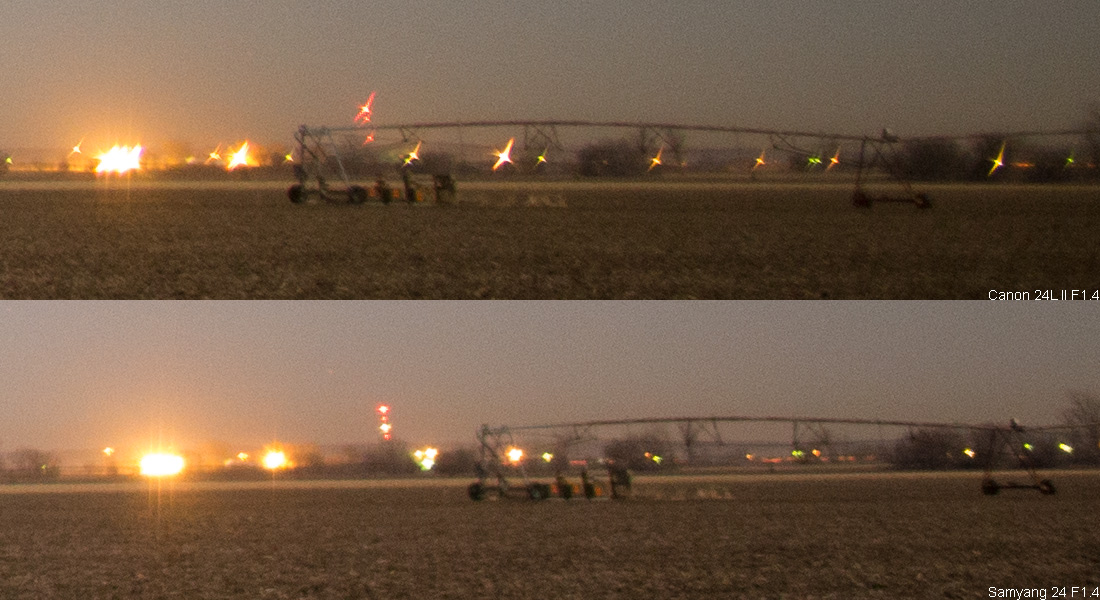 I think it is safe to say one can expect from Canon's full frame corners something really no better than the bad side of my Samyang.  Or the side the focus location isn't currently favoring on the Samyang, which is possibly decentered at the moment.  And for absolute certain expect truly horrible coma wings on the Canon.  I mean compare the light wings above from the Canon to the bad side of the Samyang.  And again, had I focused slightly differently with the Samyang I could at least shift some of that left side goodness over to the right.  Actually pretty sure just moving the focus a hair over, I can switch the side tendency completely and if I stop in the middle it is splitting the difference. 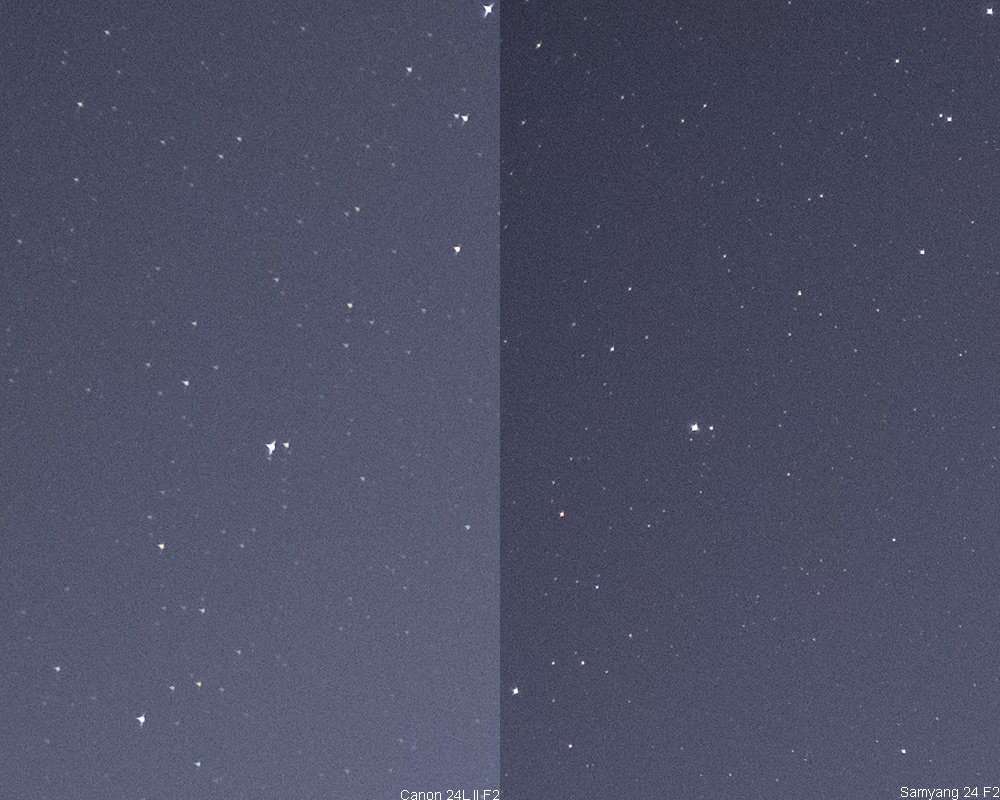 Here is an F2 example to show how it is still there on the Canon.  I removed the chromatic aberration on them both in this example too.  It's silly how good the Samyang is out there.  I'm sure some of that is lost if I shift the goodness over to the right when hitting infinity focus right now.  I wish I had checked the lens when I got it, incase it is decentered and not just something to watch when focusing.  I'm almost thinking they'll say it is within spec and it's just how it focuses.  I'll make sure to test it out another night now and post it, adjusting the focus so the left and right sides are the same quality.  And again, as you can see on the previous example, the bad side isn't any worse than the Canon and possibly sharper.  While the side the good is shifted to simply smokes the Canon.

I wouldn't worry a lot on the lens fare aspect of these two.  Both can do a big ring but you have to be dead on the light.  Light off center and Canon is a bit better.  Further off center and both do a little flaring. 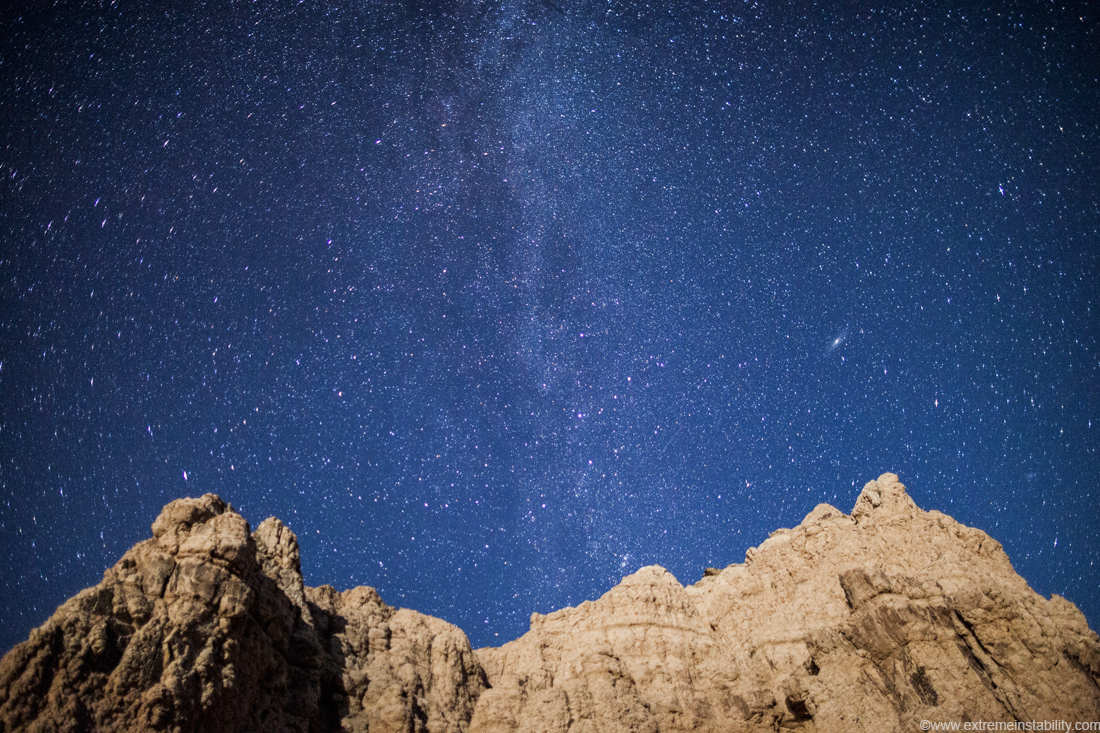 Just to show you how much coma can screw up an image, here is a full size image shot at F1.6 with the Canon 24L II(a completely different 24L II I had in the past).  Just look how even this far view you can see them curling out at the edges.  Should be points of light, not arcs, thanks to those coma wings.  Below is a full size crop from the left side.  This isn't a problem on the Samyang. 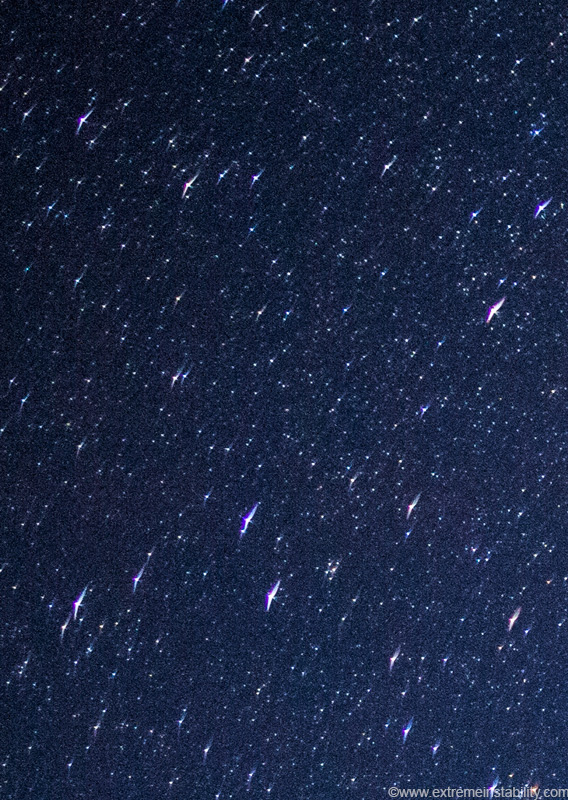 This completely ruins shooting stars or light sources from wide open clear on through F2.8. It really is a big deal breaker on this lens.  Get the Samyang 24 instead.

Given there was side to side variance on the Samyang 24 I took it back out and tried to split the difference when focusing. No moon that night though and well it was around 0F at the time and I was freezing my ass off. I finally settled on doing it at F2 and just taking a bunch in a row barely moving the focus. Then once home picking the one that most split the difference.

Take from those what you want. You can clearly look at the Canon's middle horizon and see how much things fall off toward the edges. And the coma differences in the lower right with street lights or well the stars. I can assure you the Canon's coma would look far worse on a moonless sky with higher ISO like the Samyang was shot in. Just look at the previous past example of that with the Canon in the dark.