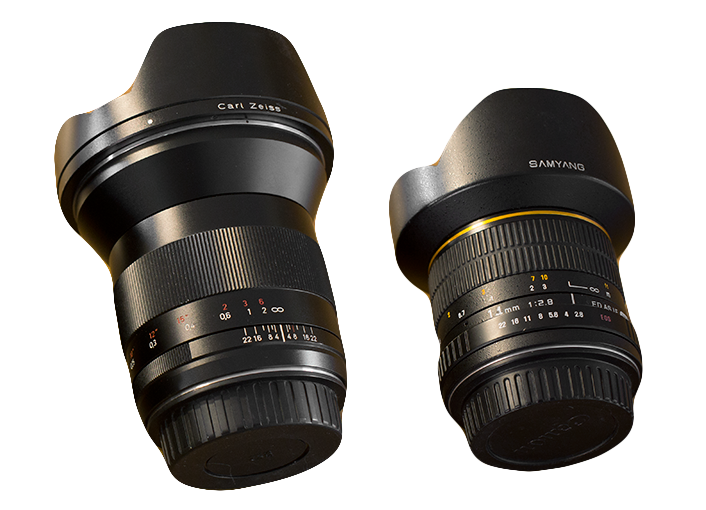 Why review a Samyang 14 to a Zeiss 21? Resolution perspective I guess. That and I needed something to stick with it.  When I bought this Zeiss from lensrentals.com it had an unusually high resolution rating. Many lenses will be said to have resolution of 18/18 or 20/20 line pairs per mm. Either or it seems you are doing good. Some were said to have 22/22 with extremely high resolving power mentioned. The one I bought said 24/24 obscenely high resolution wording. So I got a great copy of one of the best wide angle lenses available.

One of the best things about the Zeiss is that it has a hard stop infinity focus.  It is spot on too.  Want infinity, just spin the ring to the edge.  Not that doing so otherwise is very difficult on lenses.  Especially manual only lenses that don't' have the super tight manual focus rings like the autofocus ones tend to have.

When comparing color temp with everything else the Zeiss seemed to be warmer much like the Samyang 14 was.  You can see above when using the same exact white balance they are very similar in temperature.

Here is something I noticed before on the Zeiss in some shots, far cooler corners...edges even.  But this is a distortion section and you can see the Zeiss 21 has some but not bad.  Out of all these lenses, I think one can live without even correcting the distortion, except the Samyang 14. 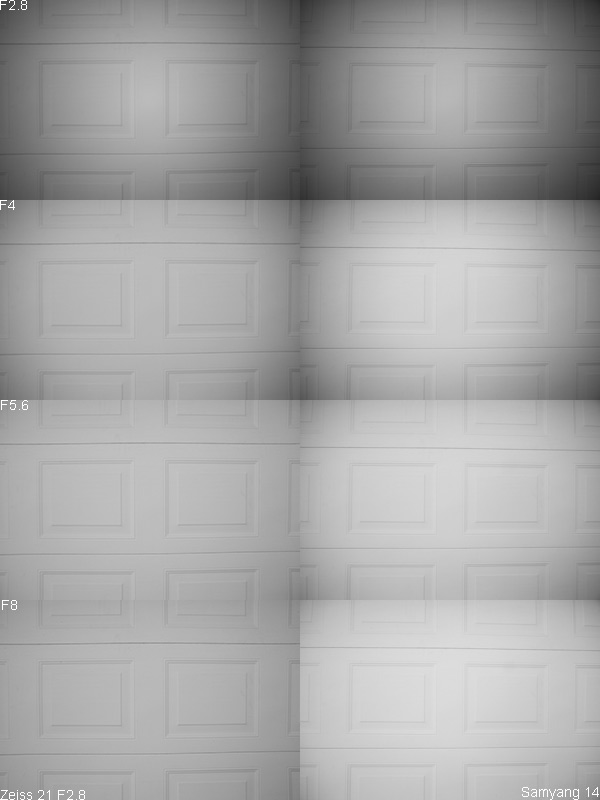 Like all the other vignetting samples, these were matched to white then desaturated.  The Zeiss has plenty at F2.8, not so bad at F4 and almost perfect by F5.6, which is good news.  Samyang not so much but good enough past F5.6.  There it is oddly brighter than everything else. 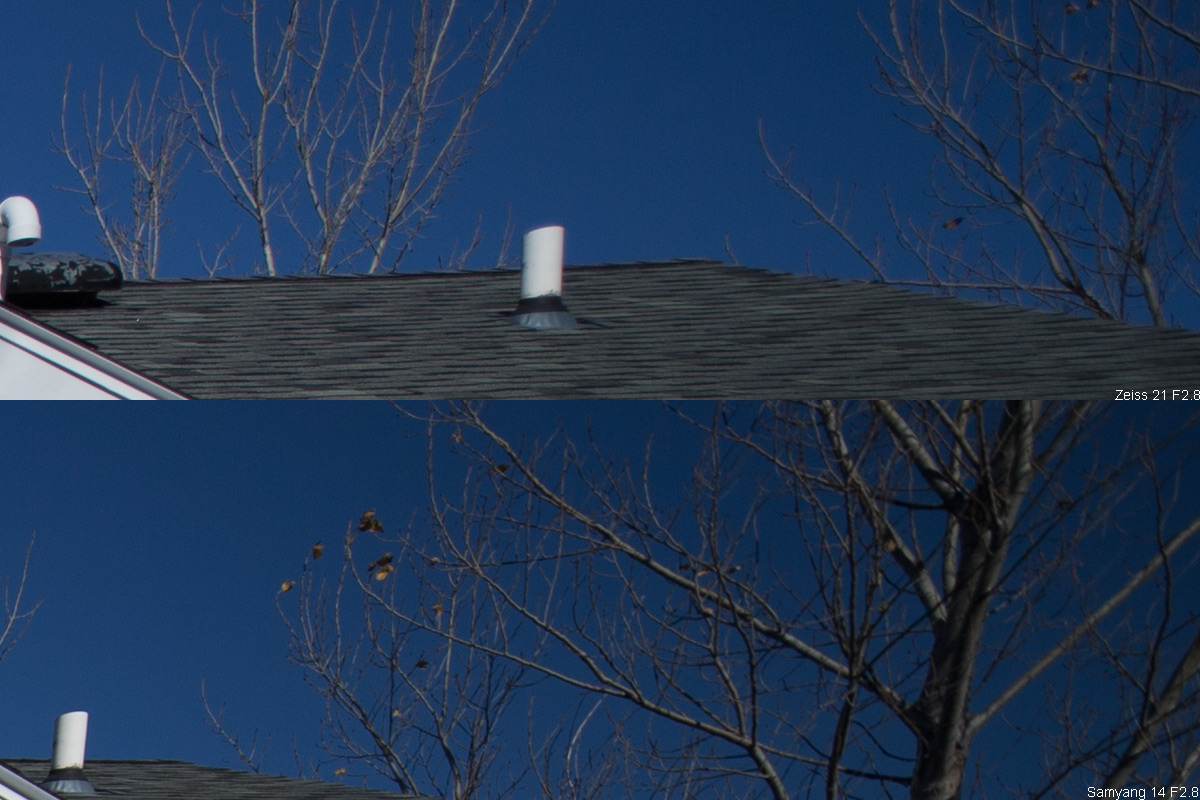 They are both resolution to the corner beasts.  Can't ask for much more at F2.8 all the way out there. 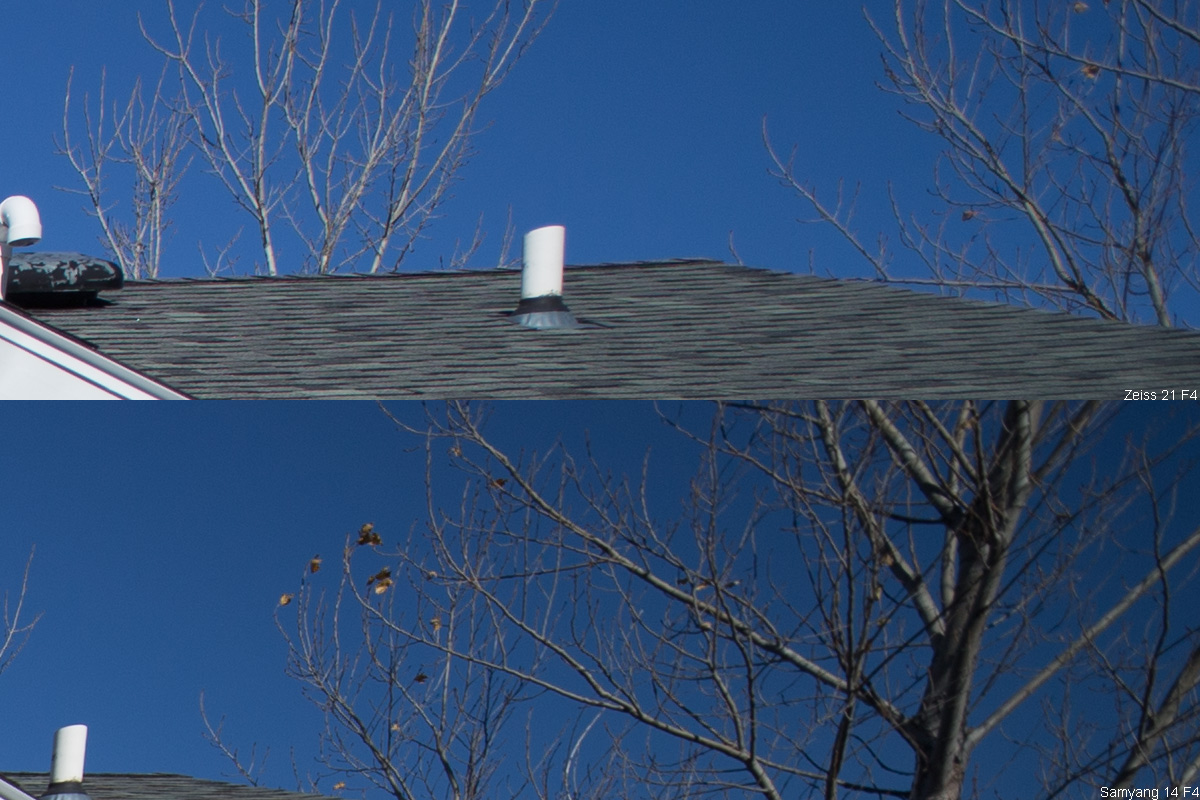 Remember everything posted on these page hasn't even been sharpened.  The Zeiss is silly out there but really the Samyang hangs with it.  Both amazing. 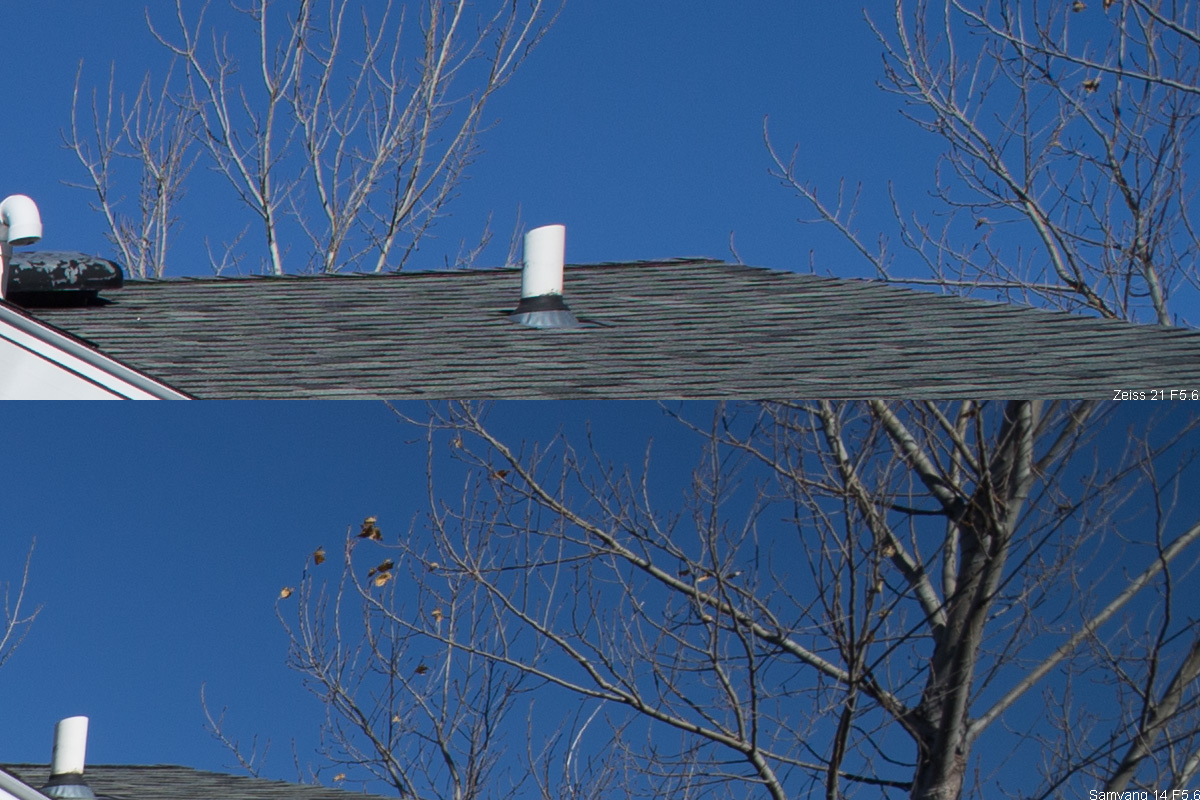 Not that either lens needed to go to F5.6 to bring the corners in.  The Zeiss is just super remarkable, least the top.  The Samyang is ever so close to matching it.  Hanging with a really good version of a really good lens, the Zeiss 21 F2.8.

Like was mentioned in the 14mm review, the Samyang 14 is mostly fine with flare but prone to super bad flare if the bright light source gets into the extreme corners...which are really extreme off to the side at 14mm.  The Zeiss seems typical of any good lens.  Has some at an angle and more at a bigger angle.  It's largely just something all wide lenses have to deal with.

Try to ignore the light rays off the more right city lights on the Samyang.  It's either due to the scratches on the lens or a possible smudge.  Get a smudge of any sort on a lens and it will do that.  Half my shots from a cool night supercell June 17, 2009 had those, which later drove me nuts.  At least that night I noticed and cleaned the lens off and voila they went away.

Middle of the lenses dang near identical.  Nice points of lights. 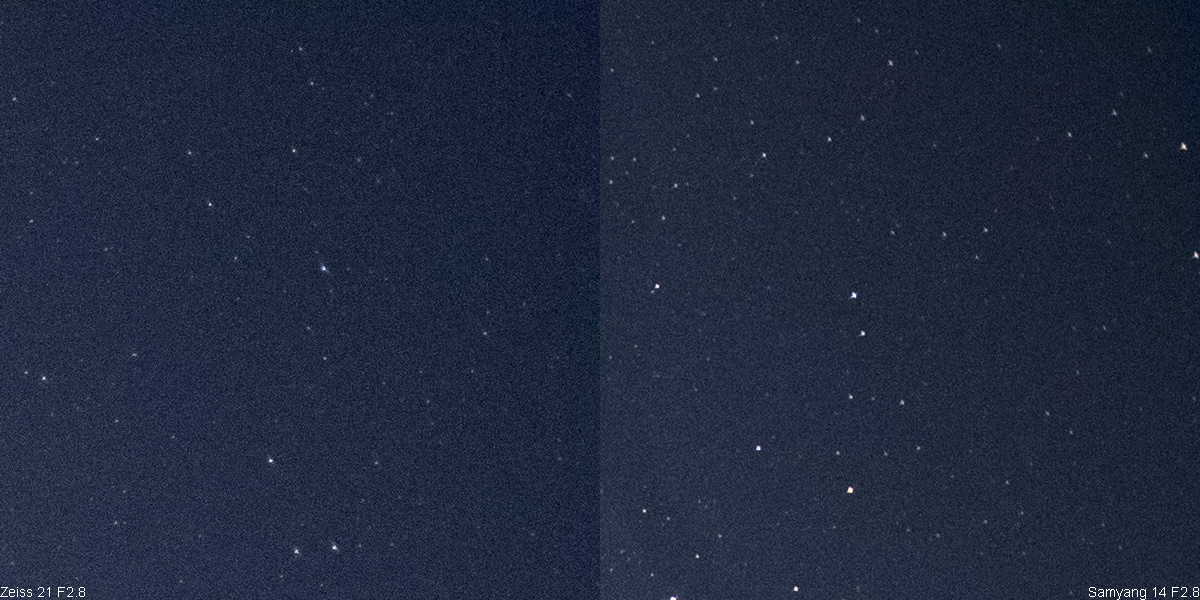 At F2.8 in the extreme upper corners the Zeiss has the edge. 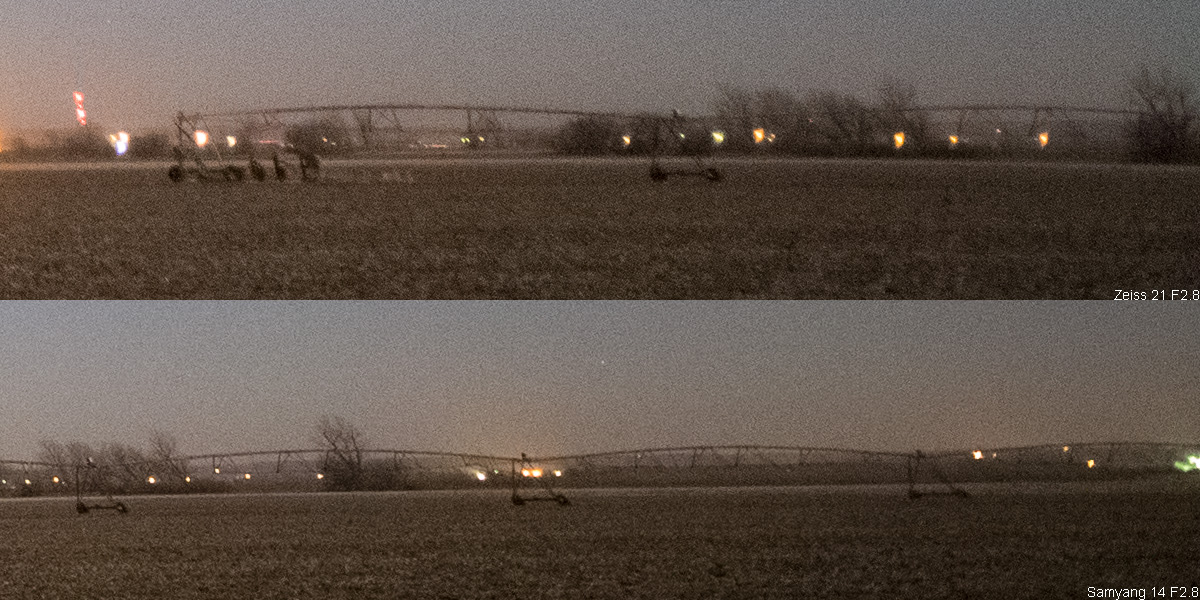 I'm a Samyang fan, but can't say I'm overly excited to see it trash my Zeiss 21.  Oddly enough the lower part of the Zeiss is not like the upper.  Wondering if it was something I did I had to go and re-check this...below.  Not like there was much I could have done wrong given the center was clearly spot on focus and well the lens has the hard stop infinity focus it had.  Anyway, confirmed this during the day. 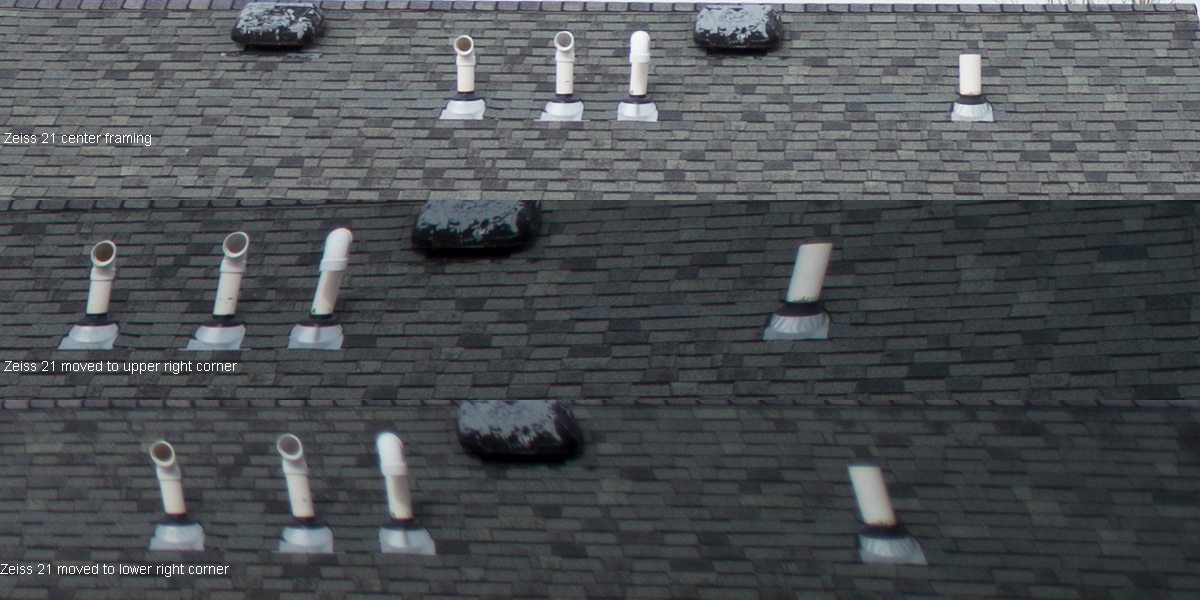 Focused to infinity.  Snapped a shot with the stacks in the middle of frame.  Reframed the shot so they were in the upper right corner.  Then reframed it so they were in the same area of the lower right.  Ug.  This is a huge negative about testing lenses much.  Finding stuff you'd likely happily never noticed otherwise.  And boy does it seem they all want to have sides they favor.