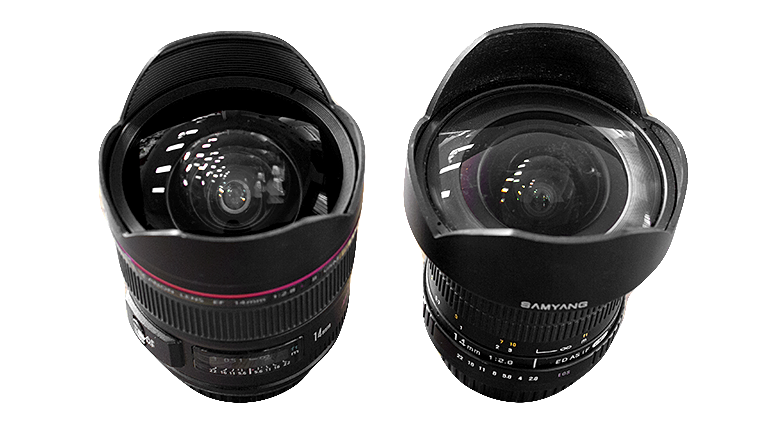 Samyang is also branded with Bower and Rokinon. Same lens regardless of the name on it. Samyang makes them.

The Samyang doesn't have autofocus, which isn't a big deal at 14mm. I never use autofocus anyway, unless I'm telephoto shooting birds. I measured the infinity distance on these and it's only about 14 feet away. One can sure use manual focus inside that distance too, but stuff that and beyond there's zero reason to use autofocus anyway.

I rented the Canon 14L II and 3 others from lensrentals.com. I did so just to compare them all. I've had the Canon 14L II before, as well as the Canon 24L II. These act just like those others I had. Also lensrentals tests their gear out before each rental. So these results are rather representable as to how these lenses perform.

My Samyang 14 has a big scratch and some small scratches just right and down of center, thanks to the big front element these two have and my not sticking the lens cap back on. You can see it affects the middle right of the image on some things. Not a knock on it, just a note about it. It'll be cheaper for me to just buy another one, than it would be to fix it if it were the Canon 14L or at least similar I imagine. It's made me start to try and use lens caps. Throwing gear on top of gear isn't good when the lens has the front bulging element like 14mm has.

The vast majority of people that have bought this Samyang 14 have been thrilled with it. Doesn't seem their quality control is really any worse than anyone else on it. There was however an original version that wasn't as good, which they quickly replaced with this updated version being sold now. As I understand it, that wasn't a big window and not many of those originals went out. Everywhere selling these new should have the new version. This thing is insanely good for a F2.8 14mm, when it even dominates the corners on a full frame camera. Something many lenses fail at.

Basically the Canon wins at distortion and vignetting but loses everything else. Though I'm sure it is built better if you drop your gear a lot. Again, you can drop the Samyang 6 times from any distance before you should probably drop the Canon once. The Samyang 14 F2.8 is still solidly built/feeling anyway.

I will start with color temperature and overall image look. The above were shot with identical settings at F5.6, same shutter and iso. I used the same white balance in raw conversion. The Samyang is clearly warmer. It doesn't mean it is bad though. It is just warmer and needs a cooler white balance setting. Or you could say the Canon is cooler.  On all of these I did no processing to the images. I did apply the profile fix for distortion on the Samyang just to show how it can look as far as that. One will want to apply that. I didn't let it apply vignetting adjustments though, just the distortion. I show the distortion below, so that is included.

Here is the same shot with the Samyang's white balance set about 600k cooler. It probably needed a hair less than that to be the same temp as the Canon. One is now sort of splitting hairs on overall image look. No contrast or saturation done except whatever camera raw default is giving them.

And here are the uncorrected distortion examples. Note the vertical lines on either edge on both are pretty straight.  But note the top and bottom horizontal lines. They bulge outward from the middle. The Samyang a lot more. But it's really a non-issue with the profile fix attached in conversion. Also the Samyang 14 is wider than the Canon by a little bit. Even after the fixed(mostly) distortion it is wider.

With vignetting the Canon pretty much wins. These are all shot with identical settings, so you get a light transmission idea too. If you use the same white balance on both, then the Samyang looks warmer and darker. But if you just make the white the same white so they are on the same playing field, you get these results for vignetting. With the Samyang being warmer it just looks like it is letting less light through. But with them evened out via white balance, it's more level like it should be.

At F2.8 the Samyang actually has a brighter center but loses then in the corners being darker. It improves quite a lot by F4 and F5.6. By F8 it's mostly gone and seems like a brighter image overall now than the Canon.  I worried it would be a problem with the night sky shots, using F2.8 but really it's not.  I'd for sure go to F5.6 or so on any higher dynamic range day scene. 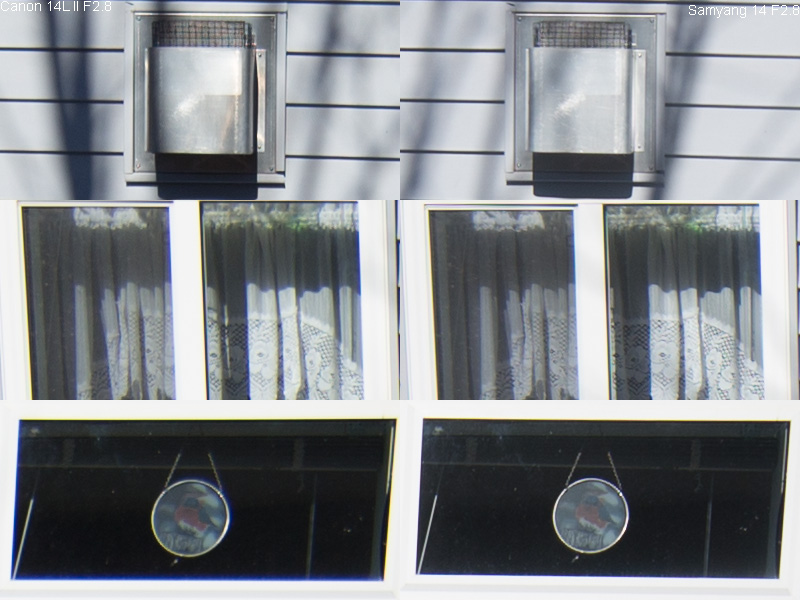 Canon left, Samyang right at F2.8(they will all say on the image somewhere). These from around the middle. Remember my Samyang has a big scratch and small ones where that vent is. The curtain is the left of center one and probably the most representable for center. Basically in the center they are damn similar. Samyang probably has the edge away from my scratches. The lenses were super carefully focused to infinity using live view 10x, so down to pixel level more or less. I even did that to find out how far out infinity begins on these. It's really only 14 feet or so. The front of the house is beyond that from where the shots were taken.

In the corners the Samyang simply smokes the Canon. It's amazing how good this lens is across the entire frame. This is with the distortion being corrected too.  This blurring towards the corners will show up in the star examples too. If you have full frame and care about corner sharpness, I'd get the Samyang for sure.

In the center at F5.6 they are still rather similar. Ignore slight brightness differences and the scratch issue on the vent area.

Even these 2 stops down from F2.8 to F5.6 the canon is poor in the corners. Samyang still smoking it. Lots of chromatic aberration too on the Canon, not helping it.  It's probably less of a crack on the Canon than it simply is a plug for the Samyang being damn sharp across the frame.  Because the Samyang hangs around in the territory my Zeiss 21 F2.8 does in the corners.

Finally by F8 the Canon is closer to the Samyang in the corners. The color fringing is still there though. While the Samyang is completely free of all that. It's been free of it since F2.8.

Both of these were shot at F2.8, 8 seconds, 5000 ISO. Nothing was done in RAW except the distortion profile to the Samyang, without enabling vignetting correction. The Samyang white balance was lower(or the Canon white balance was higher) so they had the same color tone(or closer anyway). A rather full moon was high and behind me. But you can see there isn't a huge worry on the vignetting when shooting the night sky.

You'll probably notice the light streaks off the lights on the Samyang. I'd ignore those as something was on the lens or it's just those scratches doing that. Get any smudges on any lens and you will get that. That is all that is. I didn't notice it till after the fact. The thing to notice here is simply the coma differences in these two lenses. The Samyang corrects for it, the Canon does not and the difference is huge and important if you want to use it at night.

You can quickly see just how bad the Canon is with coma compared to the Samyang. It's horrible for a $2300 F2.8 lens.  And look just how sharp the stars are in the far corner of a full frame camera with the Samyang!  Those are really damn good for clear the hell out there at F2.8.  As in the last bit of the frame, completely out there.

In the center you can see again, they are damn similar. Both very sharp. No problems there.

Get away from the middle and the Canon quickly falls to the Samyang. Just look at the big coma off the lights on the Canon and none on the Samyang. Hope you don't have street lights in your edges with the Canon. Even by F4 there is still too much coma on the Canon. If you want to shoot the night sky with one of these, it's a super easy decision. And really it's not a hard decision to go with the Samyang in the day too!

Same deal on the lower left. Samyang clearly sharper away from center. You don't even have to go that terribly far to see it start either.  That said, the Canon isn't that bad for wide open out towards the corner.  The Samyang is just that good at it.  Even after fixing the distortion.  I would not let distortion sway you or vignetting.  Both are easily dealt with.  You can't magically deal with soft corners and coma wings on lights.  Nor should you at that sort of price tag.  Sadly if Samyang decided to match Canon's $2300 tag instead of $360 I'd probably have to do it and go with the Samyang still.

Lens flare is a tricky one to compare and just tricky anyway on ultra wide 14mm lenses, with a big bulging front element. Included above is straight at the sun, sun off center a bit and then sun far in corner. What I have taken away from things is this. Straight at the sun the Samyang is pretty fine while the Canon tends to flare easier. Same just off center. You put the bright light source out near the corners at big angles and the Samyang can produce a nasty full rainbow of a flare. It's easy enough to avoid generally though and again fares better at the light. I've encountered it shooting the moon at night. I think the only two real worries are the sun and moon in the far corners of shots. In these shots I moved the lens around as much as possible, looking for the worst case scenario at each option. These were about as bad as I could make each happen.  Samyang is fine, just don't put the light source in the far corner.  It's arguably better in the other instances.

Poor Canon. Horrible chromatic aberration while the Samyang has none. Granted it is easily removed in raw conversion. At least usually.  It can be annoying with auroras though, when the aurora is a similar color to the chromatic aberration coming off the star lights.  Then as you try to remove it with the RAW converter settings, you start getting rings around other stars that have that shade of aurora over them.

Here is the before and after distortion fix on the Samyang. I fail to see how it is an issue given all the above examples were with the fix already applied. Still it dominates. It's a super easy thing to apply in RAW conversion.

Even after the distortion fix is applied the Samyang is actually a hair wider than the Canon.