First off, I obviously wouldn't call this much of a review of either lens.  Mostly doing them because I already did all the others I had.  I only just got the 135L and I've had the 100-400L forever.  I figured I may as well quickly do vignetting and center and corner sharpness at 135mm.  And I suppose just talk about them quickly.

They are older designs now, but as of late 2013 the current offering for either.  The 135L was released in 1996 and the 100-400L in 1998.  The 100-400L replacement is already made evidently and in testing.  So that alone not a huge reason to bother testing and reviewing the thing much.  Plus after doing all the others I'm really sick of it.  Because I'm doing them all at the same time.

The 100-400L to me has always seemed to have its sharper end at 100mm but really not a problem at 400mm, especially toward the middle.  At 100mm you can use it at F4.5 but by 400mm its max aperture is down to F5.6.  Meanwhile the F2 135 can be used at well F2.  Obviously no one picking either of these lenses is torn on which way to go as they are nothing alike.  It's just kind of fun to show what you have to sacrifice with zoom instead of prime, namely corner sharpness.

They both have 2 autofocus settings, one just limiting the short end focus distance to make it quicker when having to hunt some.  Since it won't have to retract all the way back looking for focus.  Unlike wide angle lenses, using autofocus is a lot more common here.  If it ain't moving, I still always use manual focus to get it just right using live view 10x.  The problem with these with snappy autofocus systems is they pretty much all have to have really short "throws" with focusing.  This makes manual focusing precisely that much harder.  And it really can matter.

The 100-400L has image stabilization, though obviously an older(I think 2 stop) version.  It's so huge though.  I'd never underestimate the need to have it in a lens, say 85mm and above.  Maybe 85 is on the threshold, don't know, never had one.  Just guessing.  I've never felt the need while using a 50mm.  But this 135L does not have image stabilization.  I wondered how much it would bug me and well so far it seems to bug me.  The "rule" is handhold no less than the reciprocal of the focal length.  So 1/135th for 135mm.  I don't feel that great there.  1/500 and above seems more like it.  Just turn live view on and zoom in 10x and watch how well you are holding things in place.  Hopefully any new versions of the 135L have IS.

The F2 ability at 135L I think will be ideal for a couple and more uses.  Sprites being one.  "Rare" high altitude lightning discharges.  I got one at 50mm and can tell 135mm would probably be about right.  I got this for that and for comet ISON(and any others later).  There are obviously endless other thanks to the super shallow depth of field options at this focal length at F2...and the F2 speed.  I think most hand holding ops will bug me for a while.

The 100-400L is a push pull design for changing zoom level.  Don't let anyone tell you it's not a dust pump design.  It is.  I can show you the inside of the inside glass coated in dust if you want.  Though that said I don't think it is really a problem anyway.  It's taken years to get to where it is on the dust issue.  But clearly it had to get in that way.

The 135L is often said to be one of the best lenses Canon ever made.  Probably why it is still out from a 1996 design without image stabilization being implemented yet.

I could get back far enough from the house to almost be at infinity.  Not quite though, so we are just inside infinity.  I consider using the stuff out on the horizon but just too much air to shoot through.  Cold day with strong sun doesn't help.  Lots of heat wave distortion to shoot through.  The roof works.  At F5.6 you can see the 135L is a little more contrasty.  I will use this for the center sharpness then from here I just moved those stacks to the far upper right corner for the corner examples.

First is a quick distortion example at 135mm.  Neither have much of any. 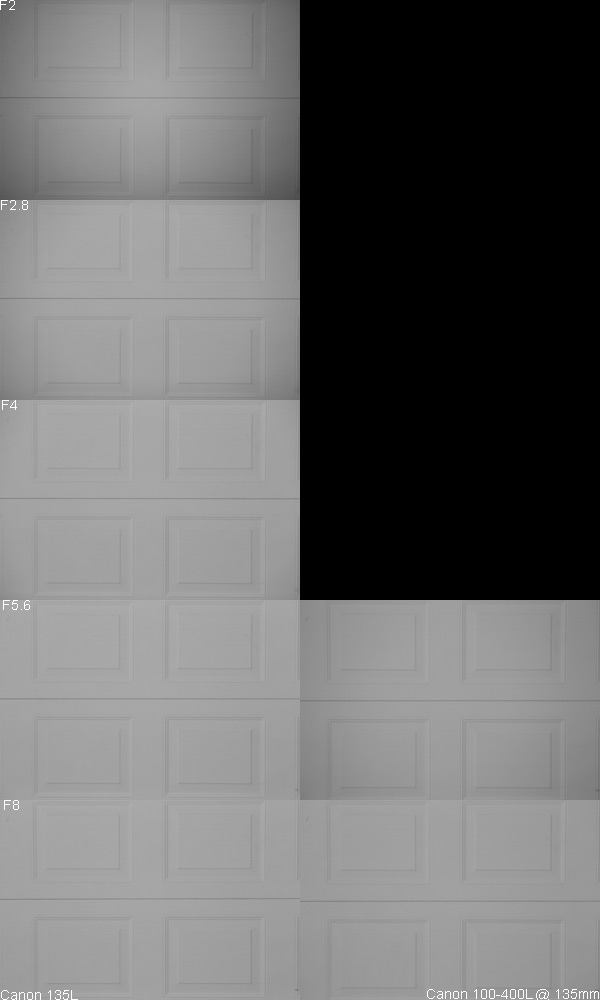 Not so much of a vignetting comparison as just an example from both for it.  Vignetting is extremely well handled even at F2.8 on the 135L. Just not an issue on either really.  The 100-400L will have some throughout its range but nothing crazy.  The strange thing it was doing at 135mm was the aperture on the camera was being weird.  The number was starting at F5 but it was staying there for one click up.  It was like it was still giving me F4.5 but showing F5 instead.  Has to be right on the borderline for that as it will give you F4.5 at 100mm.  So I just started it at F5.6 here.  Guess I could have just 100mm'd this here and started at F4.5. 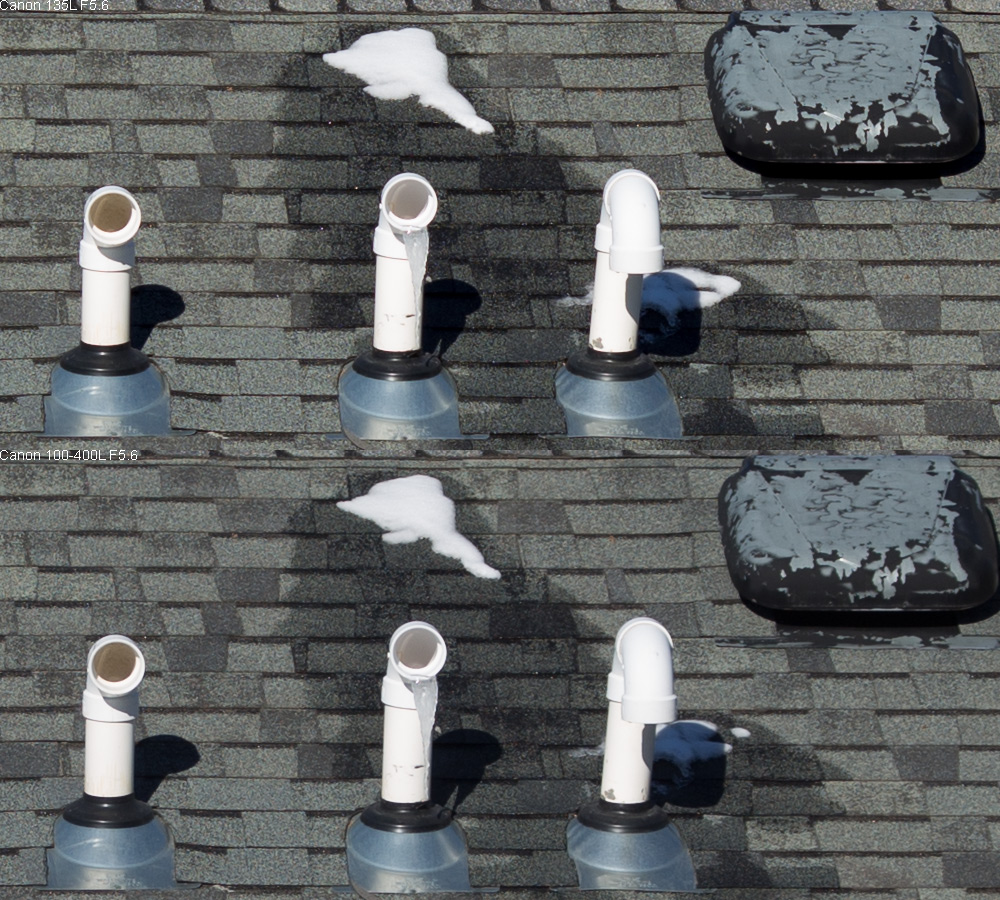 You move these to the very corner of the frame and the difference between prime and zoom shows up.  The craziest thing is just how much the corner of the 135L looks like its center most of the range.  Really damn good across the whole frame.  But yeah with the 100-400 you have a lot more range.  And it's not like the far corners and extremely poor.  For being unsharpened yet and clear out there, it's probably nothing to lose sleep over.

The center of the 135L from F2 through 5.6.  It's pretty crazy it almost starts maxed out right from F2.  Unsharpened raw files. 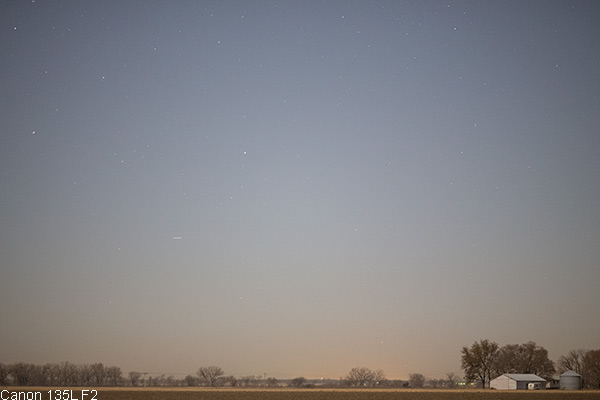 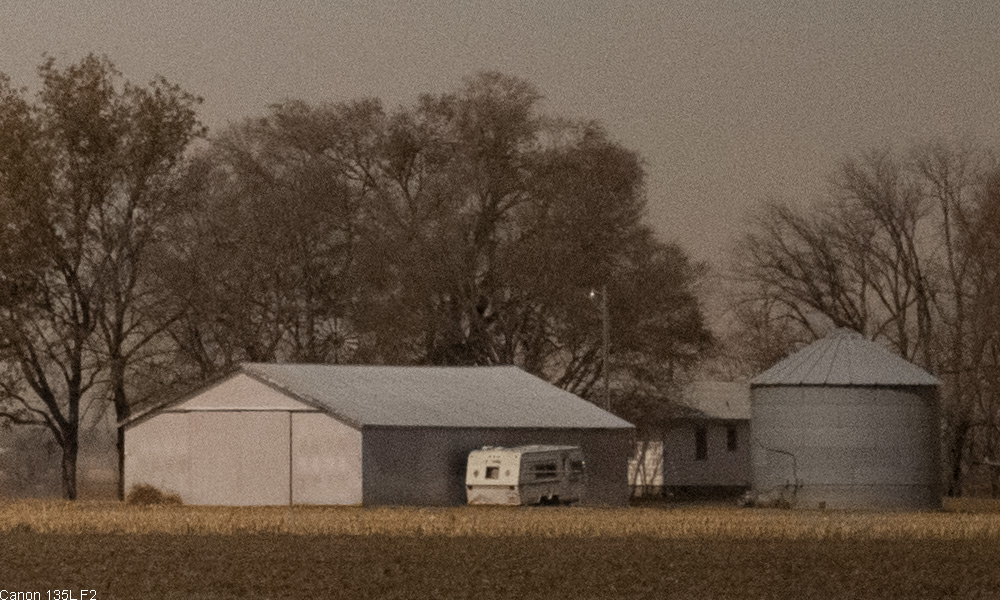 I didn't do much with the stars the night I had them all out for that.  I need to do it without the moon on this one.  It's so telephoto compared to the others and zoomed into the lighter area when placed on the horizon.  But here's one I had snapped.  Just showing the lower far corner at F2.  Pretty amazing clear out there.