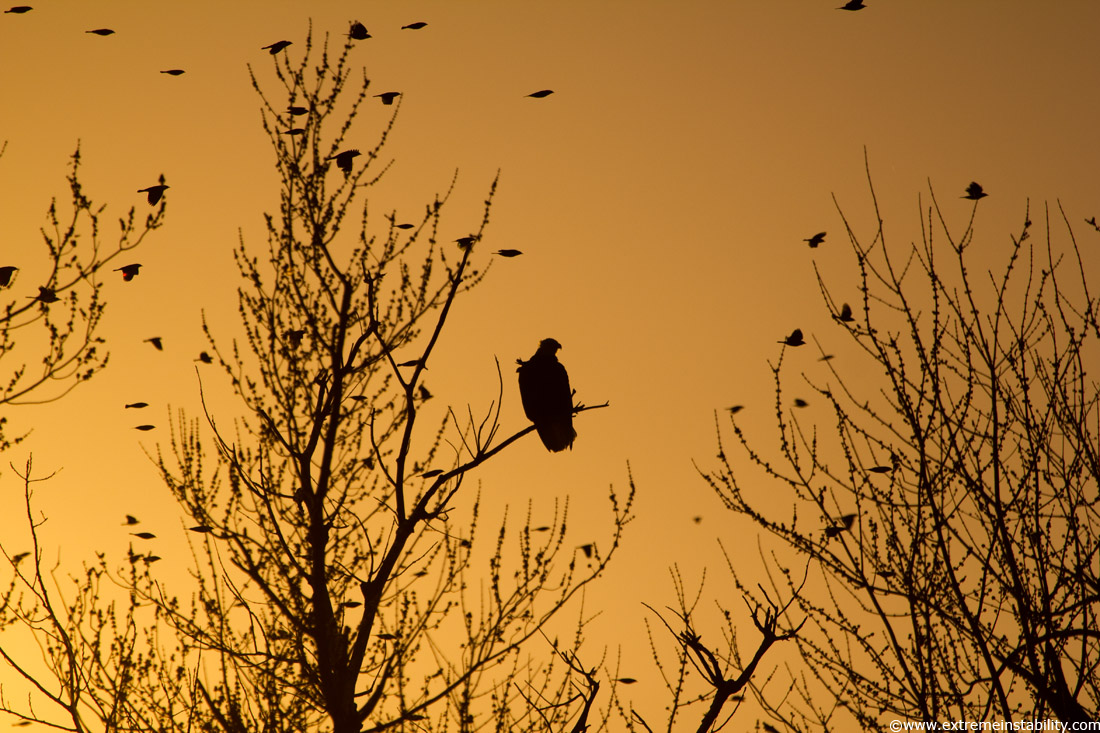 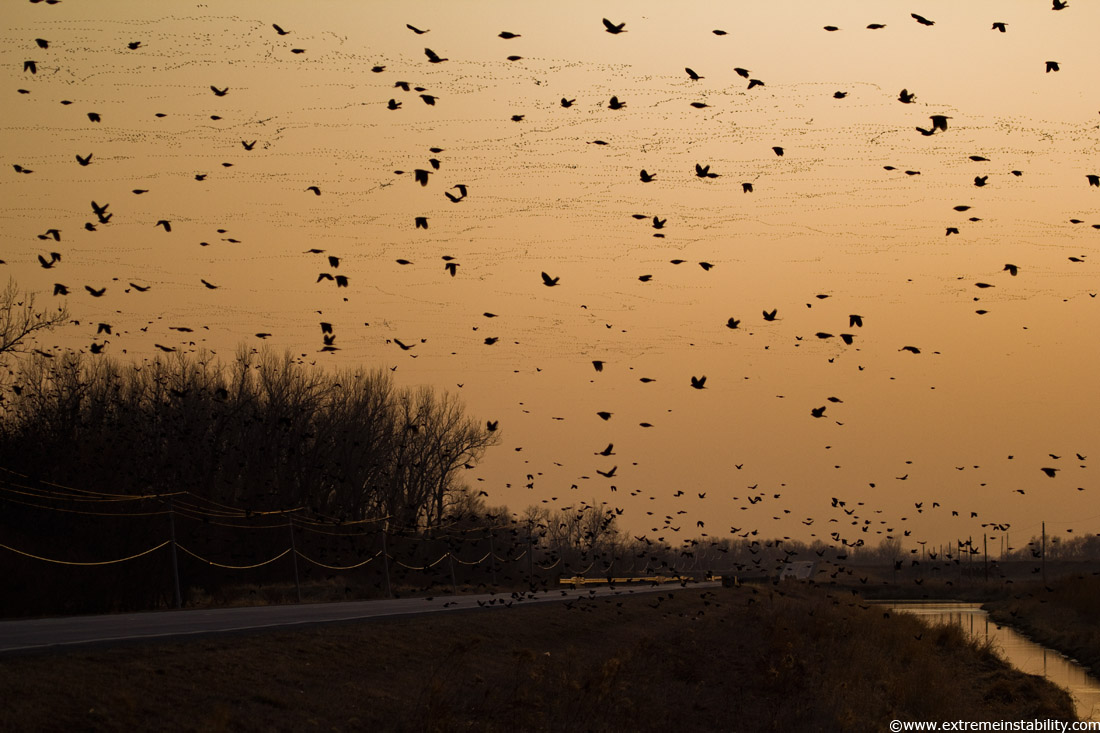 I'd seen the red-wing endless streams before, mornings coming into the refuge off I29. I am very rarely ever here by sunset, because I'm often there for eagles which become rather inactive by afternoon. So I'd actually never even seen how they operate by returning to the refuge's trees a bit before sunset. It is amazing. All these of them are shot from one small area just outside the north entrance. You can stand here for nearly a full hour and be in a stream of them the whole freaking time. But you can also see tubes and streams all over the horizon, east, west, north. Then above you have all the geese leaving for dinner. It's simply one amazing spectacle at that place. 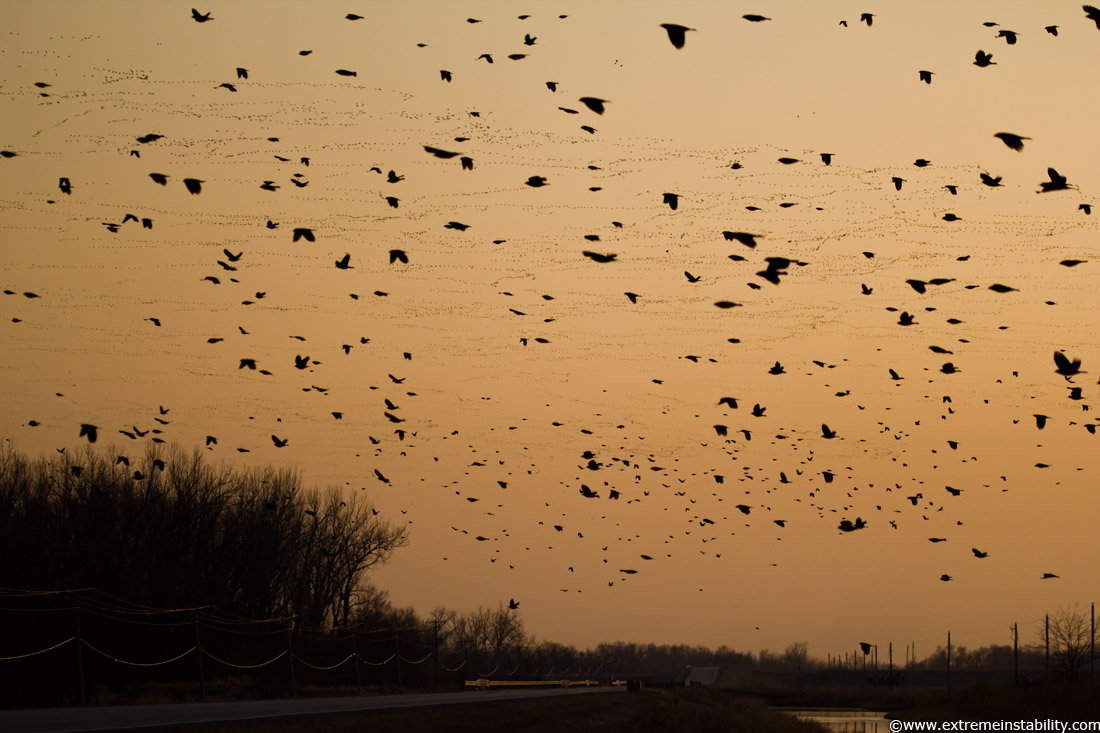 All the trees are like this, caked with them. There's pretty much an endless stream coming into the tree and leaving the other side. 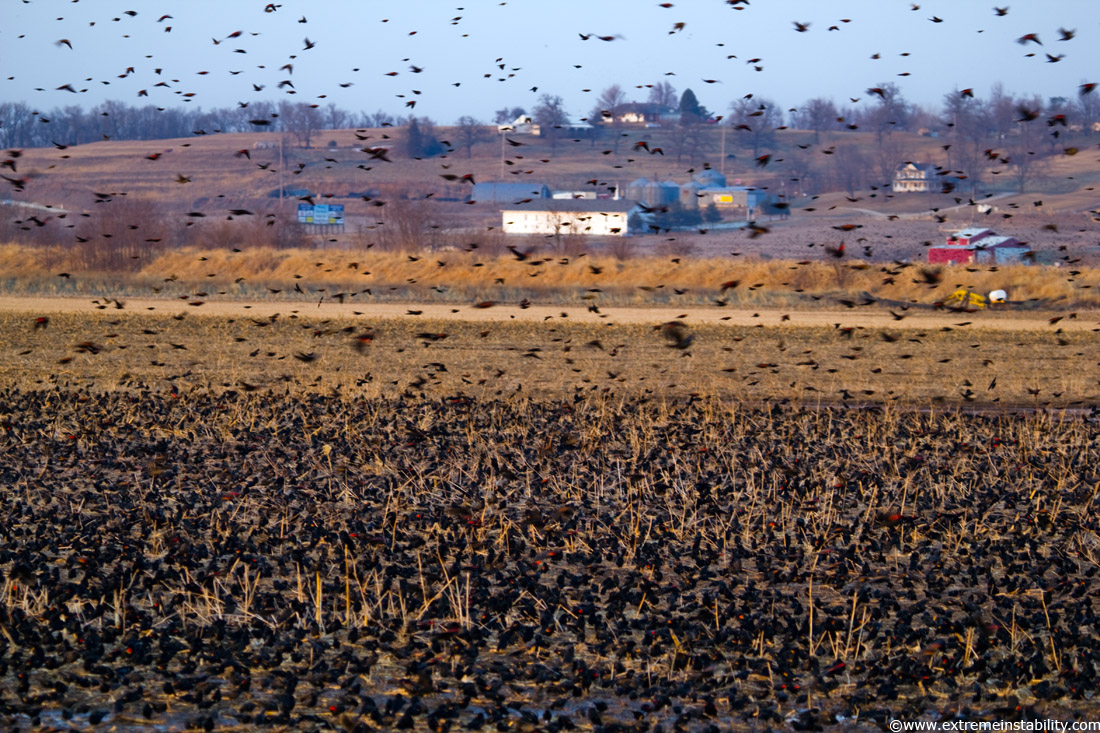 The field was amazingly covered with them and you could practically walk up to them. What was most amazing was they were in this same exact location 2 days later when I came back. How there was anything left to eat is beyond me. 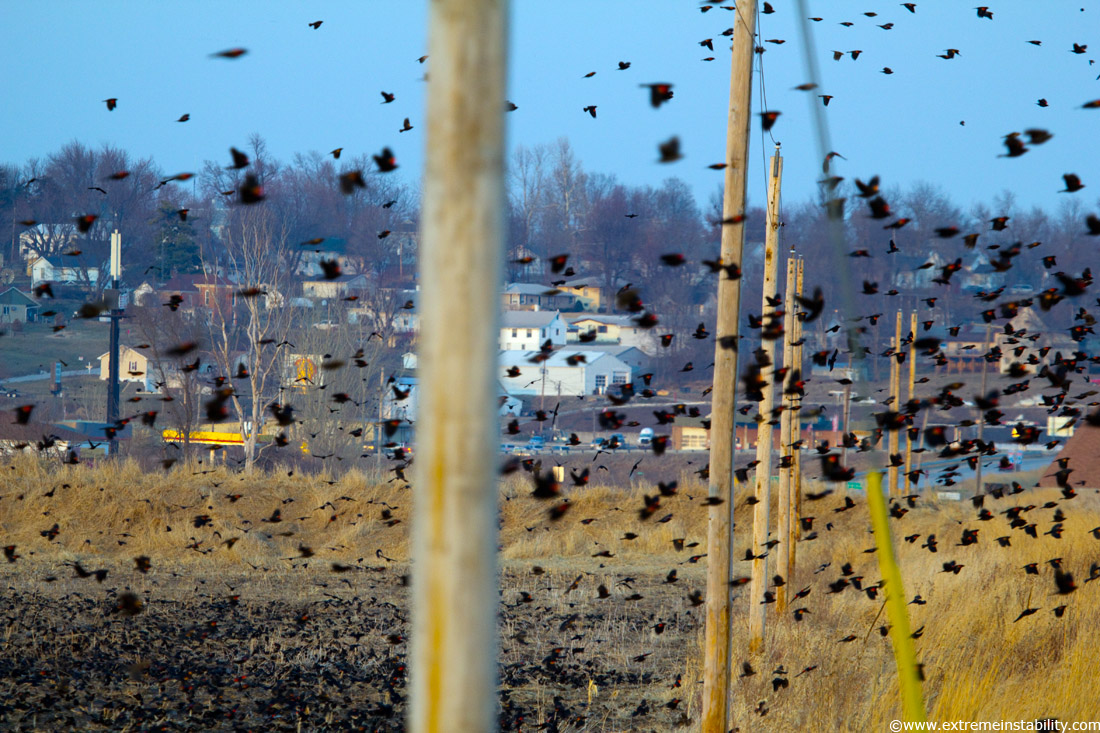 Looking right here the scene basically doesn't change for almost an hour. This is why the pictures just don't convey things here, even if they look crazy, they just don't convey it. One has to try and imagine standing there for an hour and being in an endless stream and seeing just how many other areas have streams. 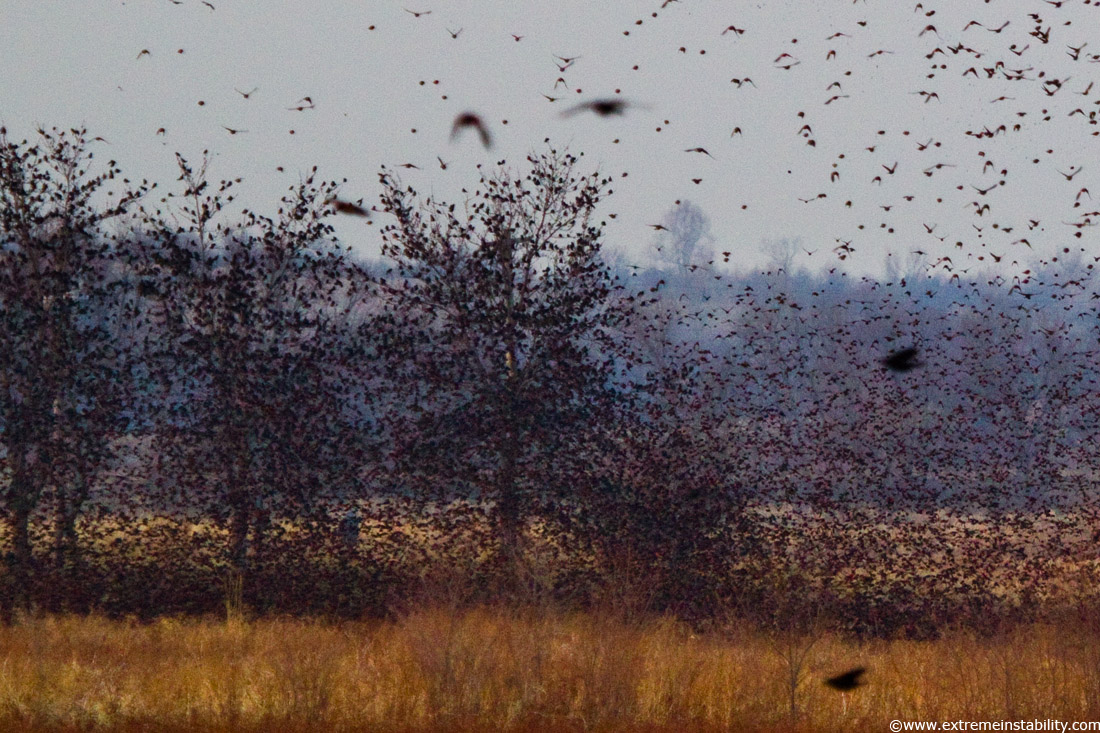 This is cropped into a shot. It's like the trees just shed all their leaves instantly, but instead of leaves they are birds. 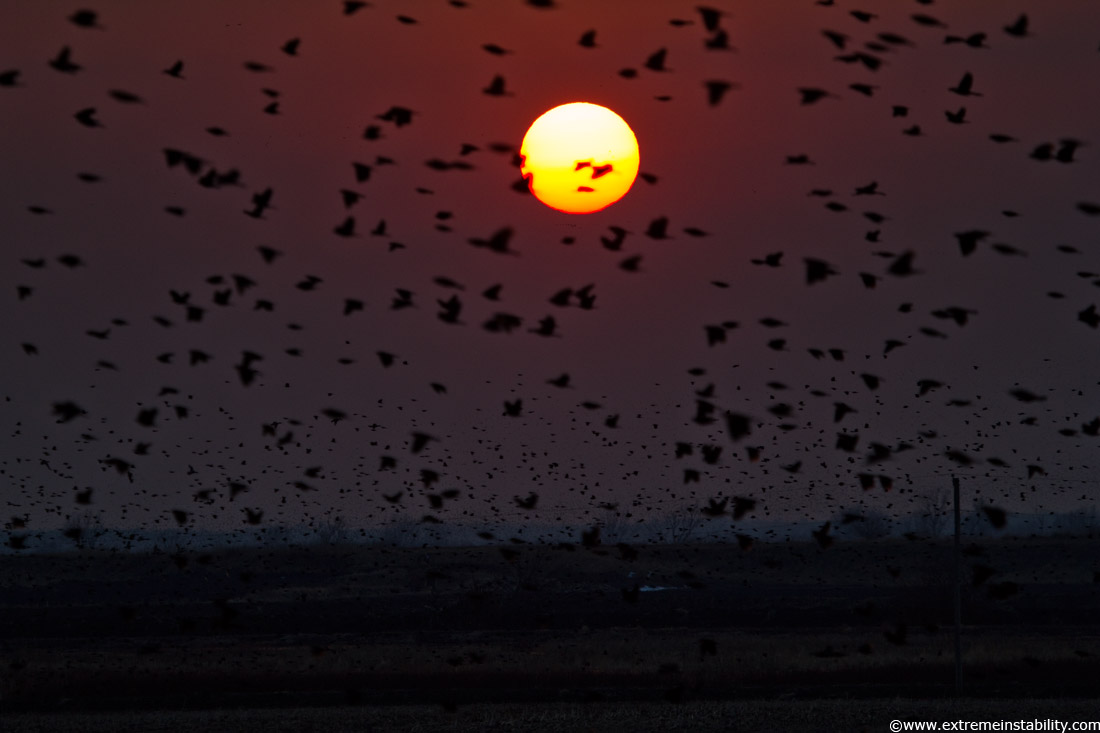 Damn you power pole, I noticed too late. Still, cool enough I suppose. 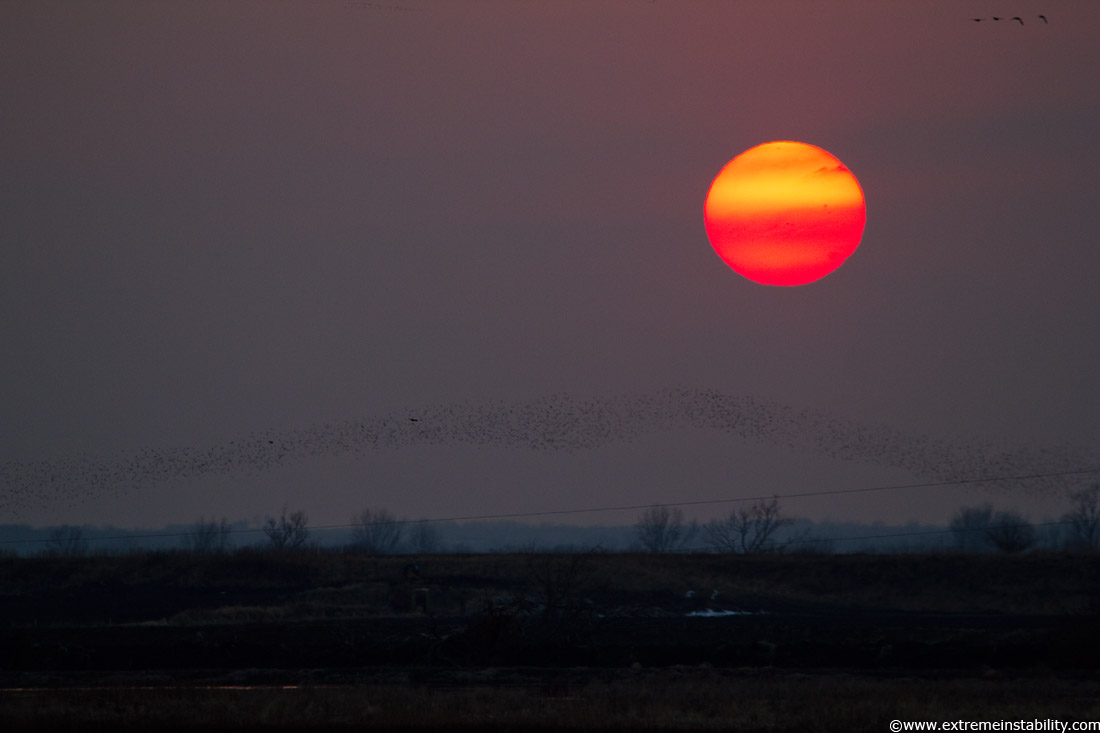 You can actually see the big sun spot on the sun. Damn you power line. 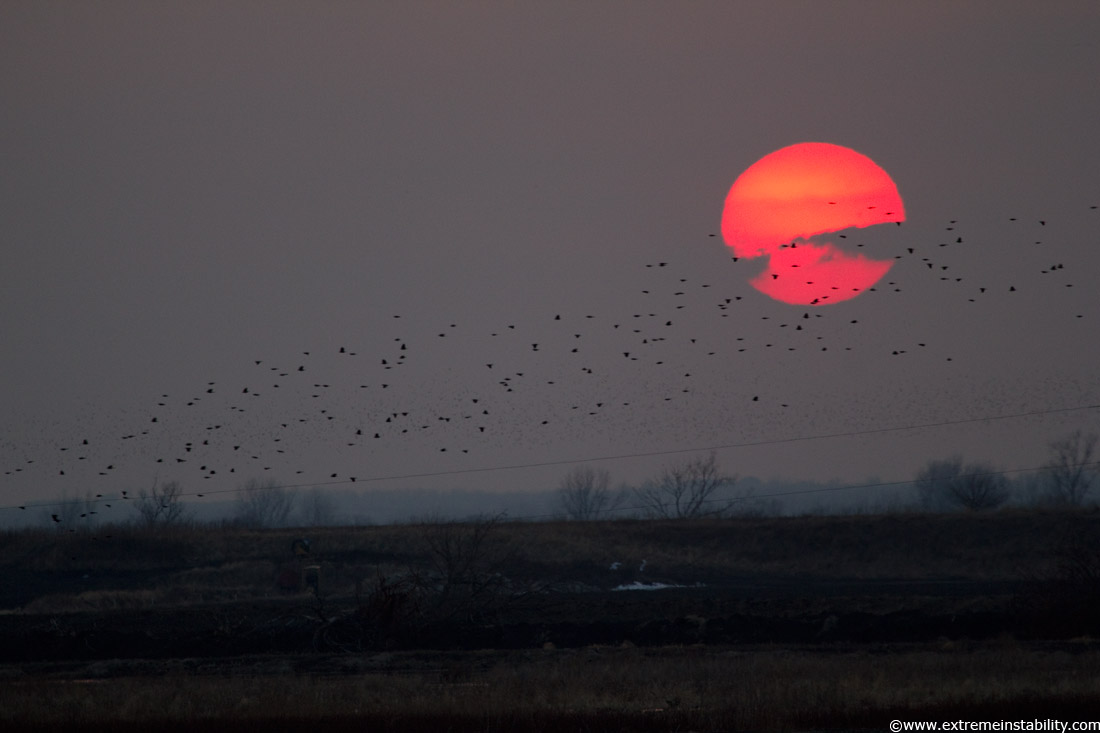 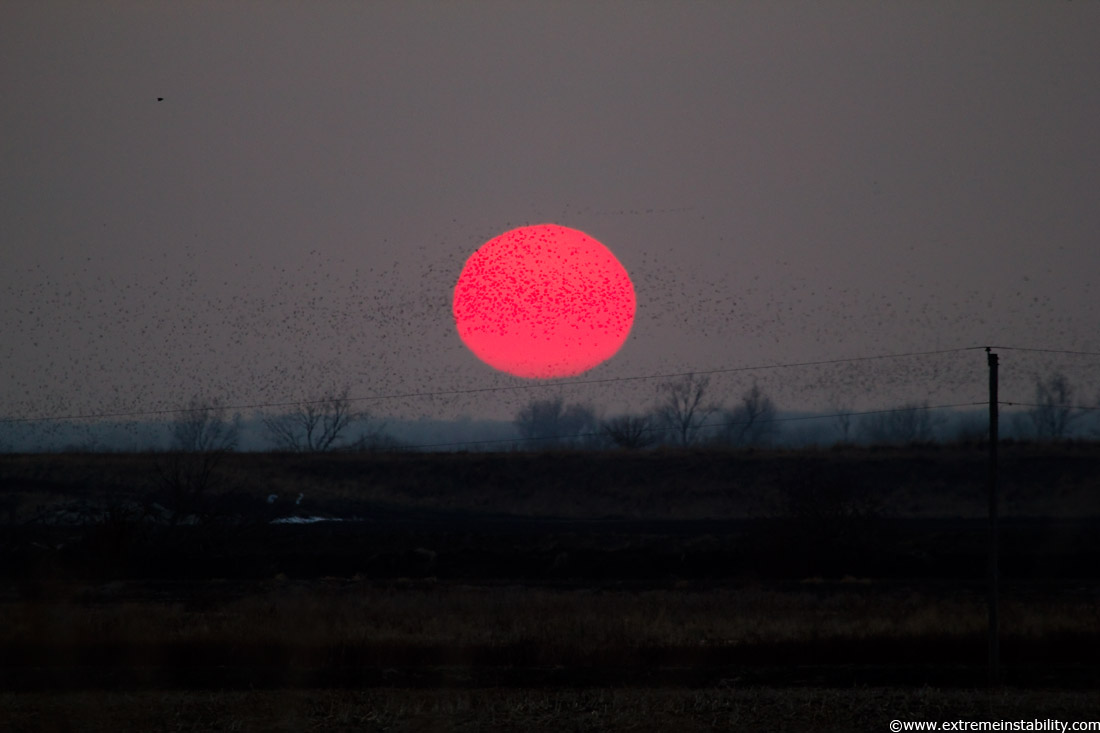 Damn you damn you power line. It was too late to move when I noticed it was going to be a problem. The place is full of them right there too. 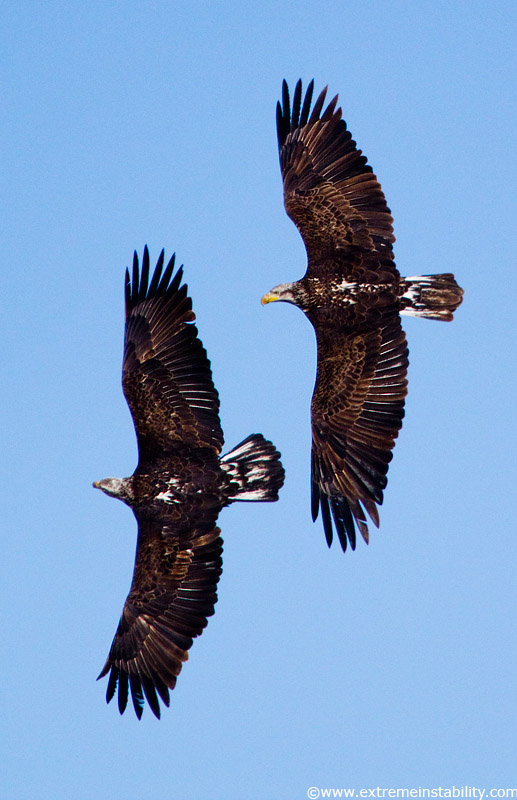 Not blackbirds. Couple eagles gave Tyler and I some ops, zooming around the trees. 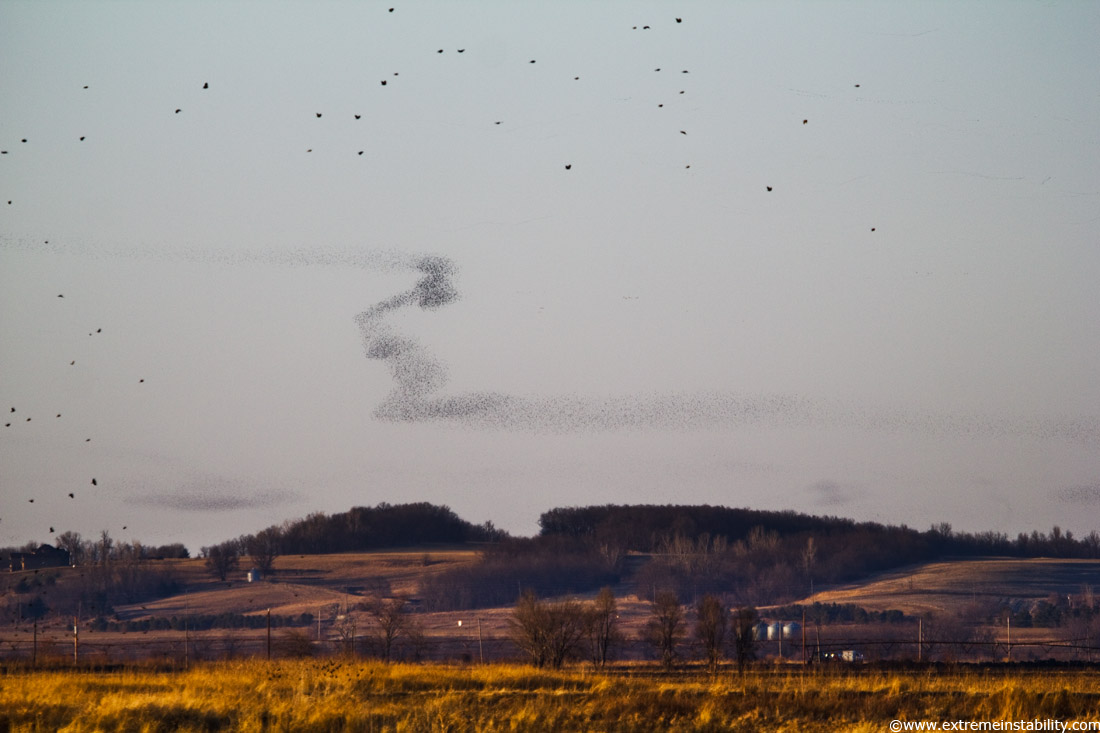 Evening on the 5th now, watching the red-wing show get underway. It was crazy cool, looking like smoke on the hill first. It would go from not even being able to tell they were there, to a tight miles long vortex showing itself. For the whole hour they were coming off those hills like that. 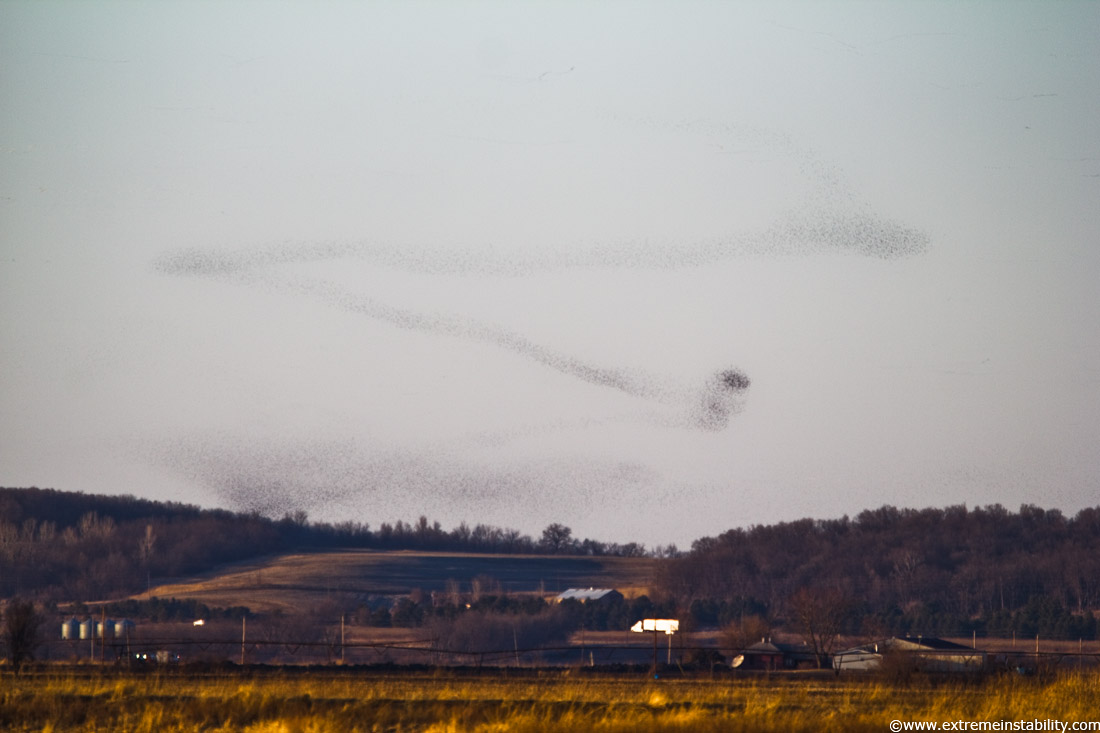 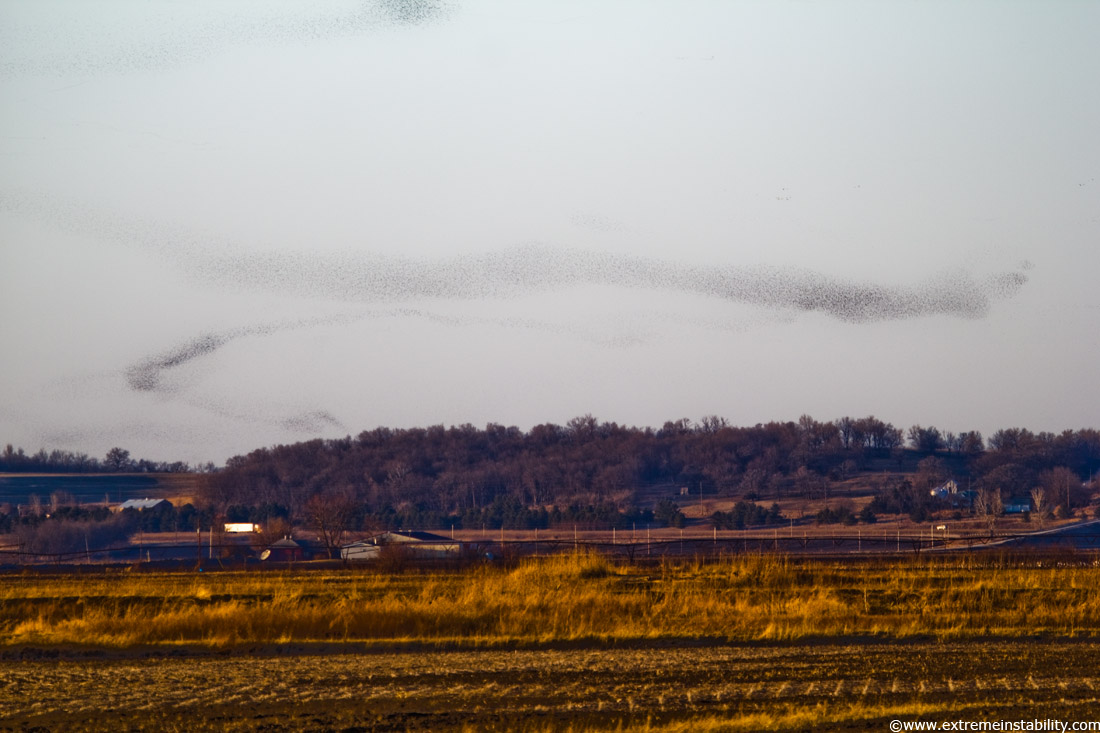 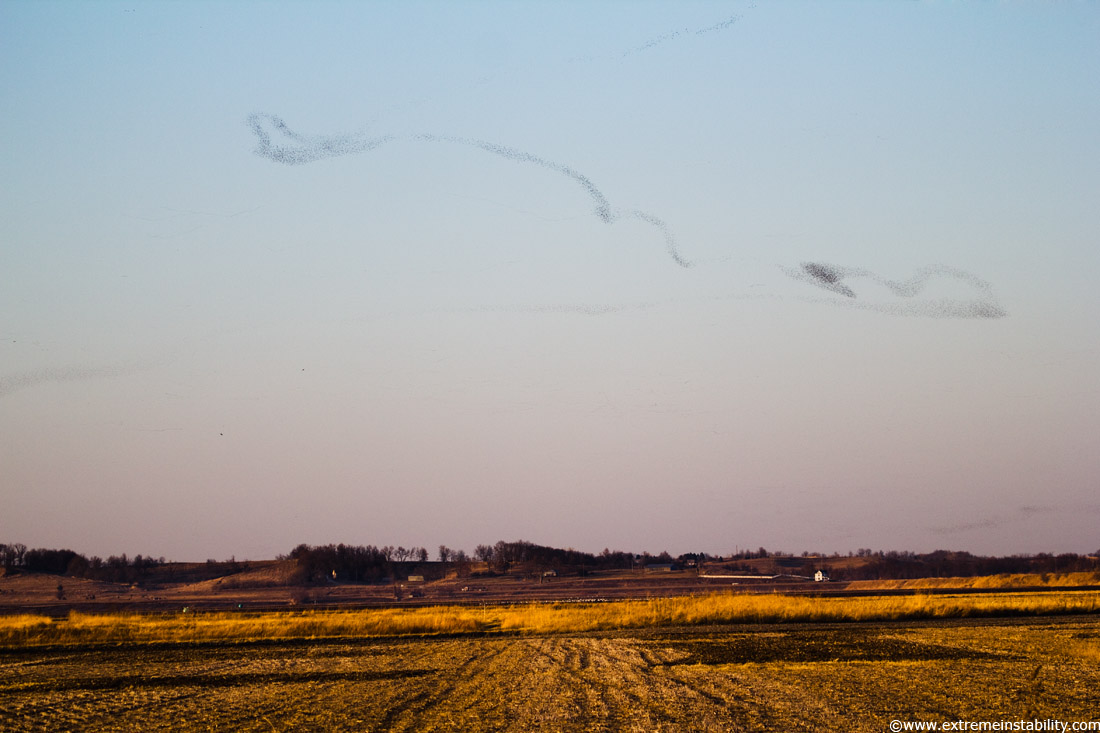 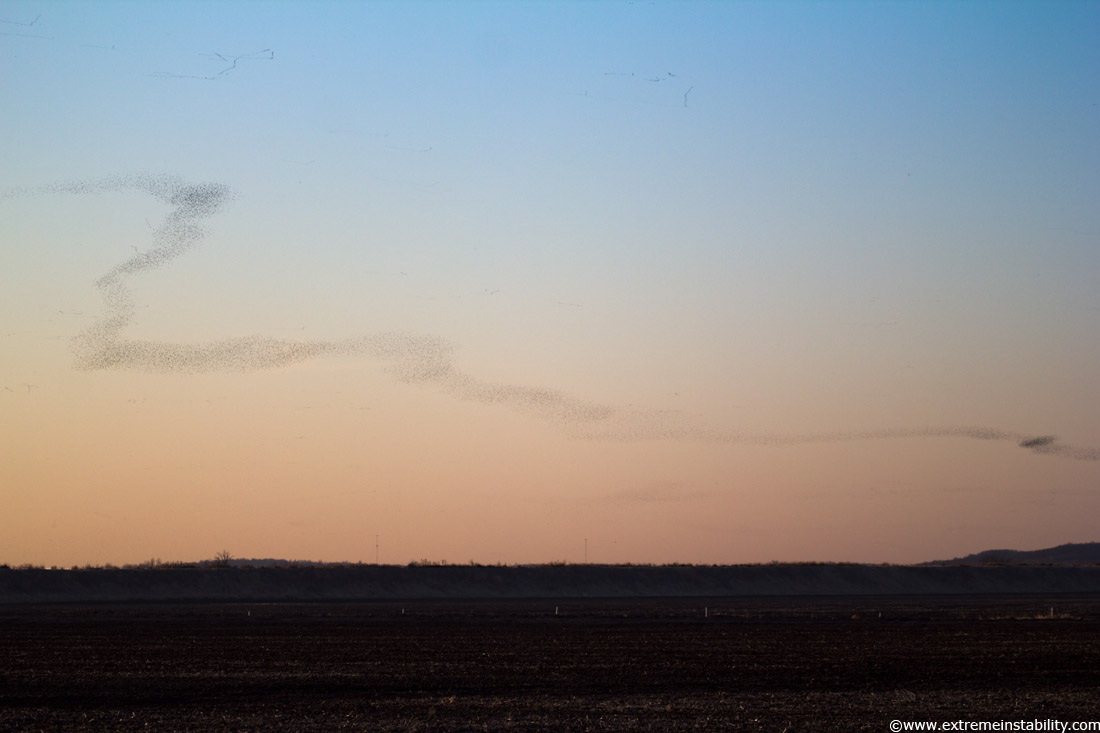 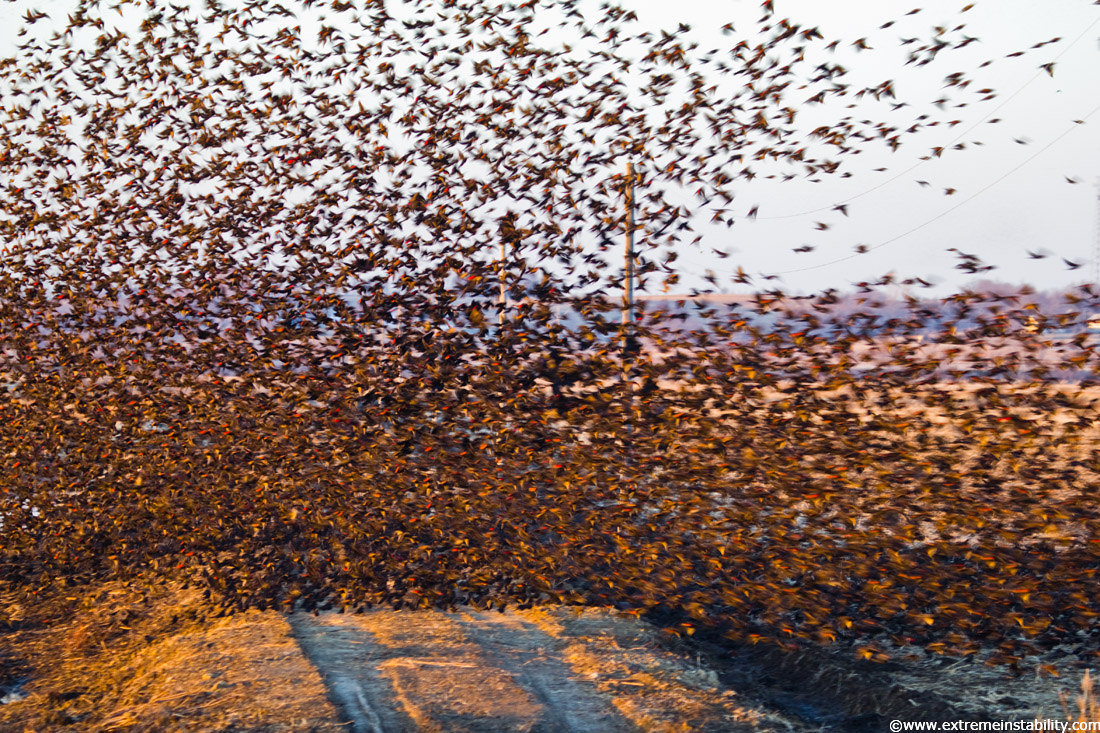 Tyler was over near the field I was at the last time on the 3rd. I drove the block or so distance over there and got this wall to go up lol. Shutter wasn't fast enough. I wasn't expecting to be shooting in the next split second when it happened. 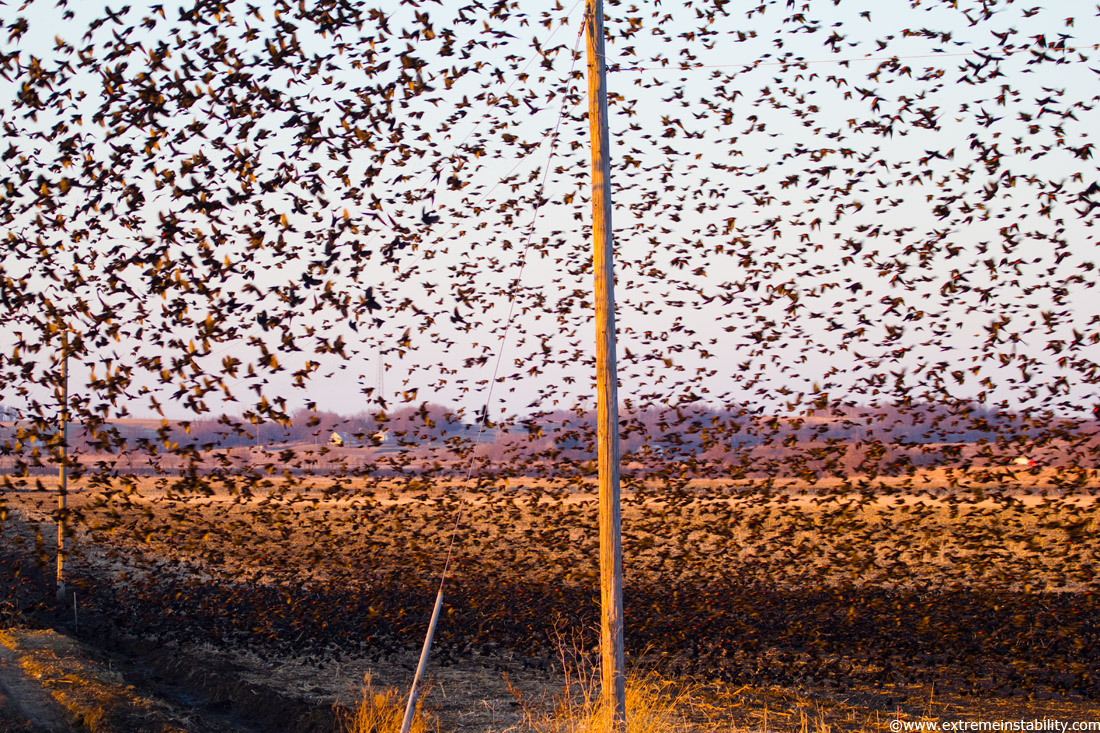 Going backwards some to the morning of the 5th and a super tall and bright pillar. 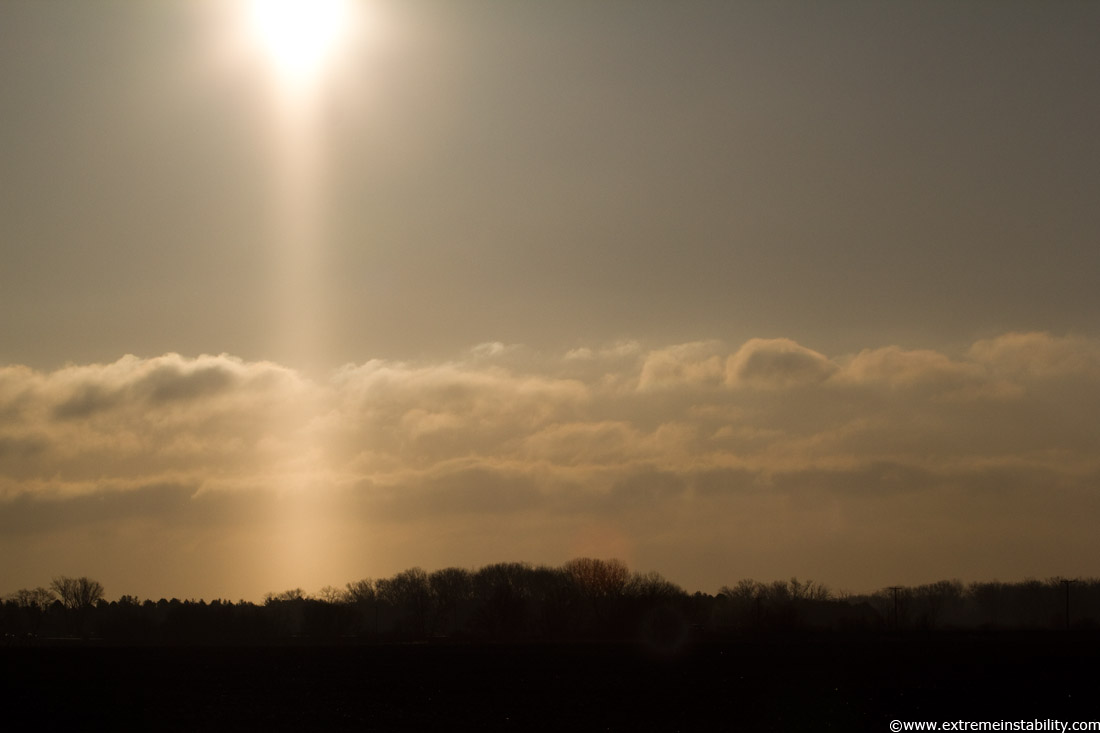 For sure the tallest and brightest under the sun pillar I'd ever seen. It's one of those cool things you get to capture simply because you were out for something else.