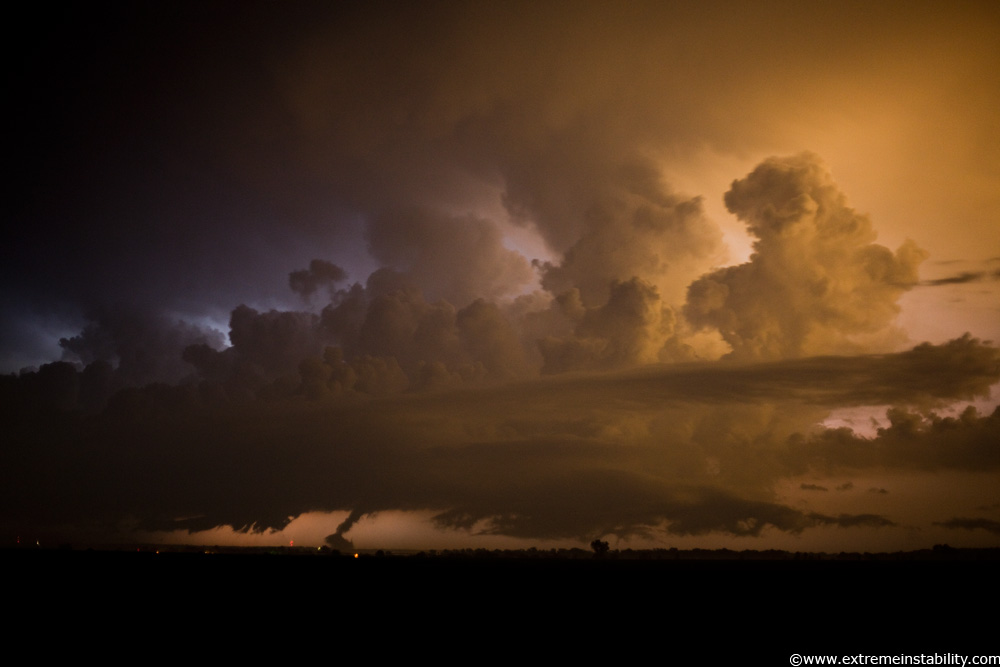 These aren't in any specific order. This one was recent, same night Offut recorded a 74 mph wind gust. Tornado look-a-like thingy can be seen under the storms as I look southeast. This was preceded by 3 power flashes. 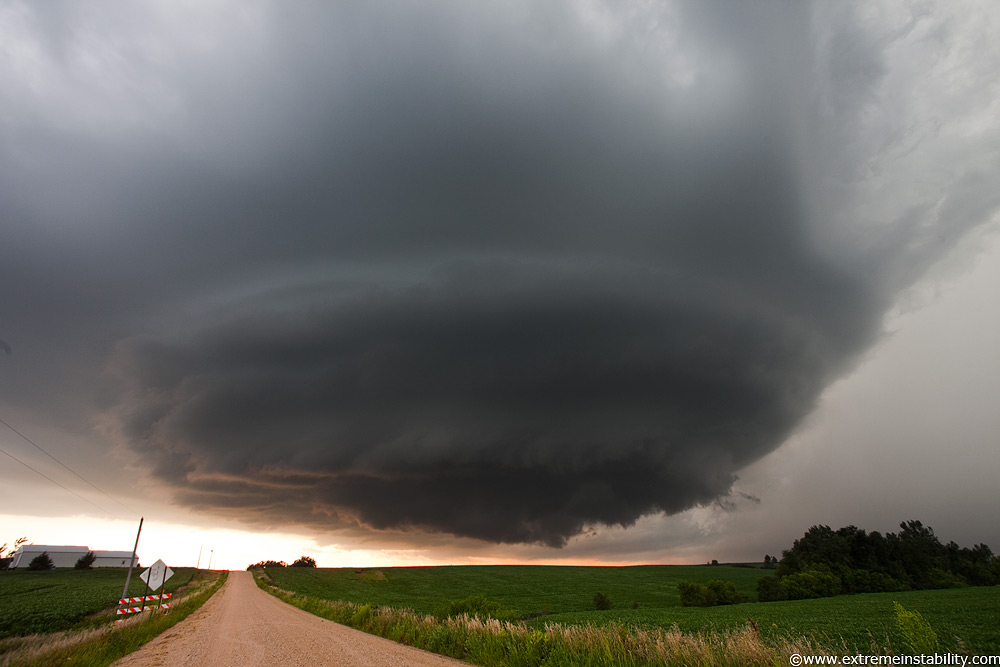 Surprise supercell dropping south down highway 77. Never had any thoughts of storms this day, saw them show up on tv radar and left for them. 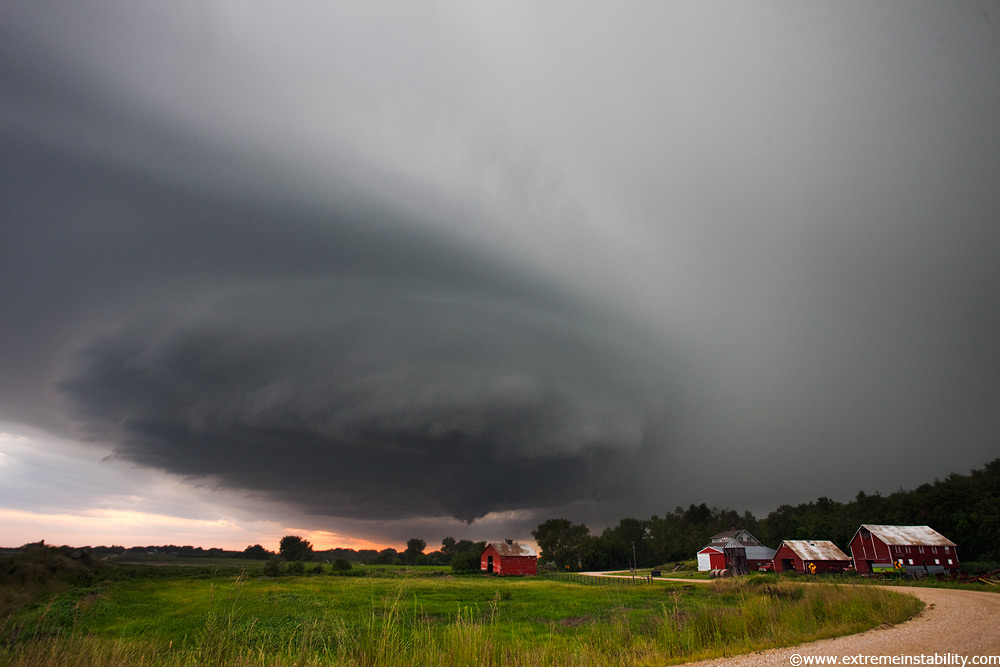 Given the setup the thing looked surprisingly good for a good while. 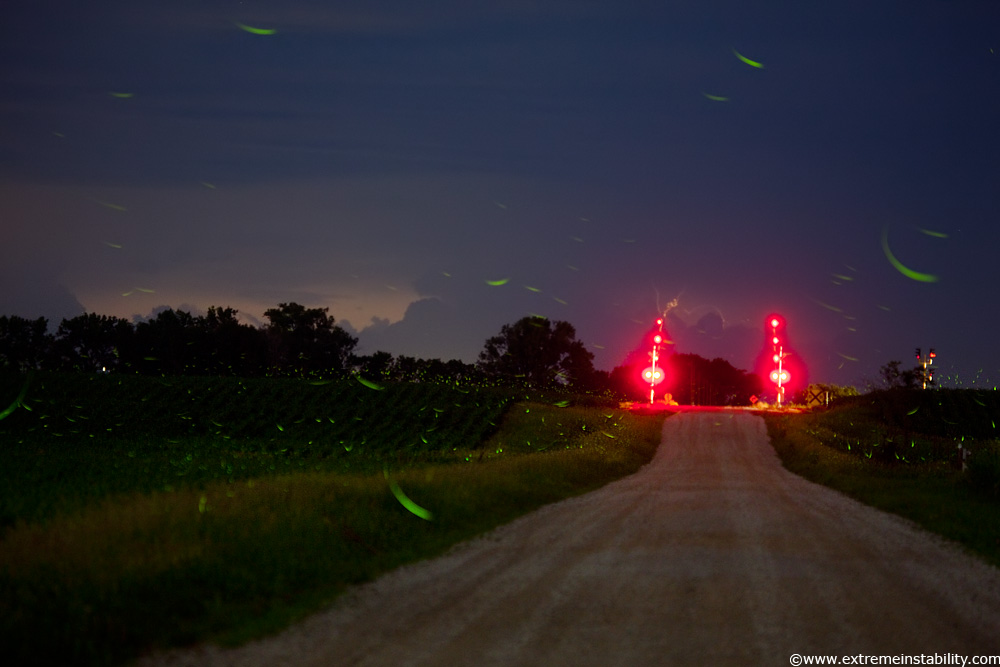 Trying to get lightning with the lightning bugs but not having tons of luck. Look real hard, you can see one bolt above the left cross arm. Takes either a real fast lens(F1.4 etc) or high ISO...or both. This was high ISO through the 100-400. 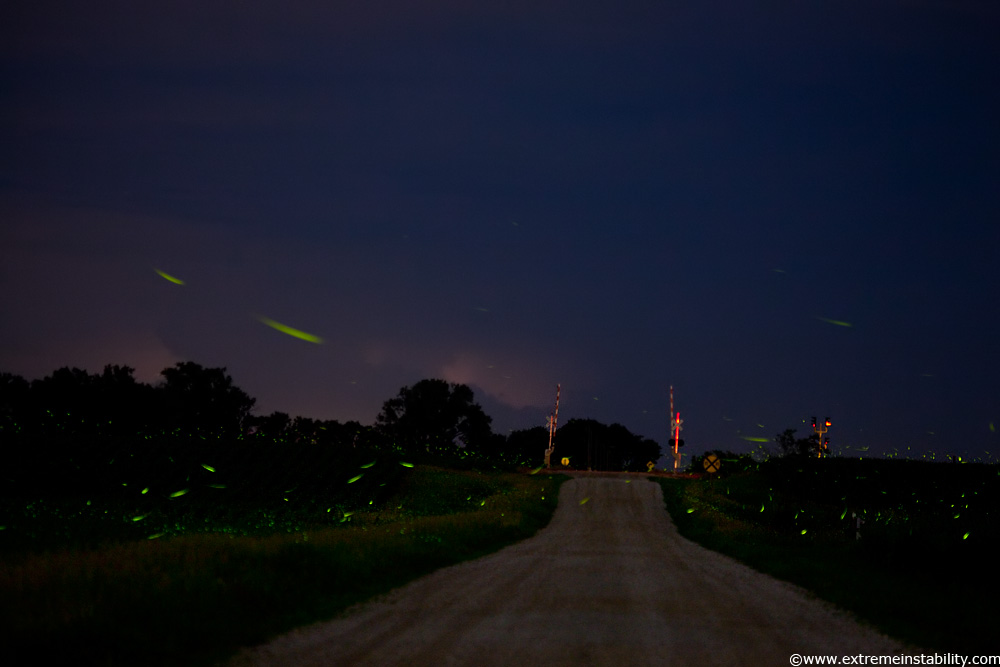 Just a few of the things. 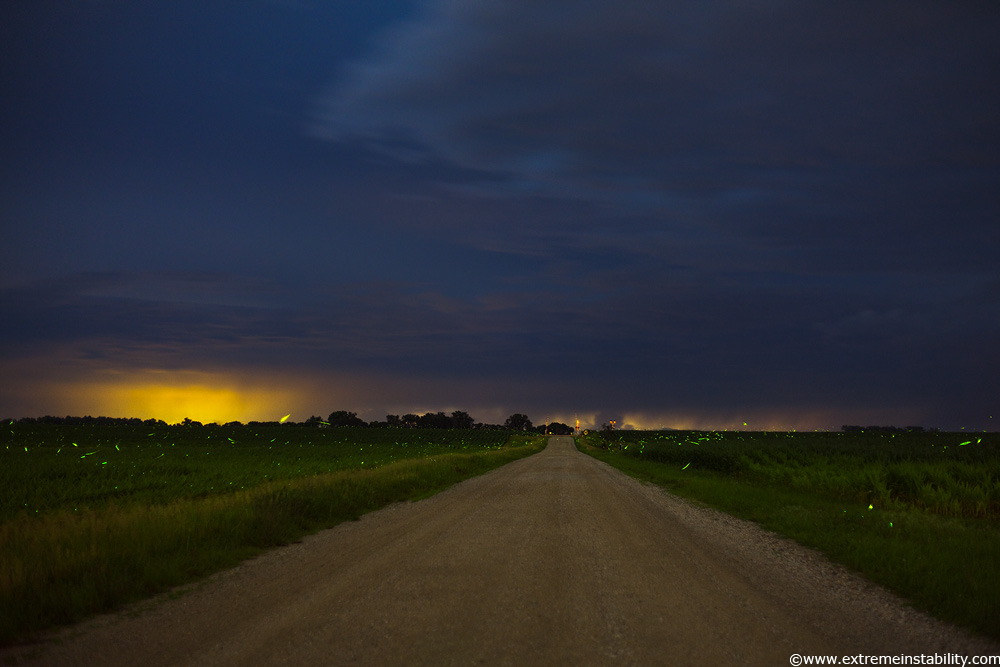 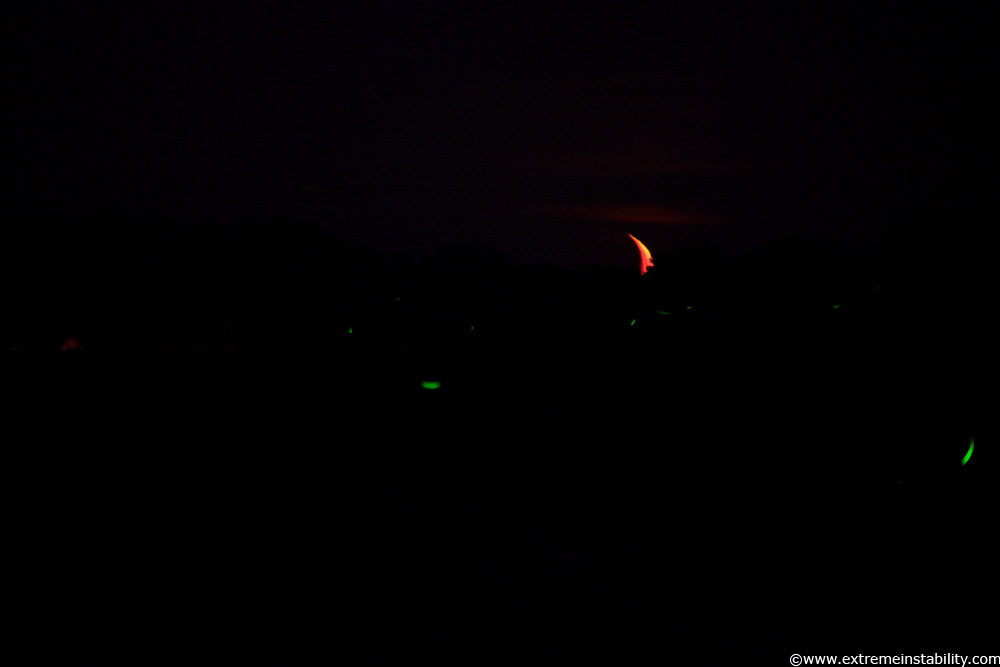 Different night after trying to shoot lightning. Moon popped out from behind the anvil so tried to get it with lightning bugs. Given you have to high ISO the thing to get the bugs to really show up, well if the moon isn't blocked some it will obviously be blowing out.

Had I been smart I'd have tried to get one of the frames with the focus on the interior. It was hard enough to mount the camera down in there and figure out where it was pointing. 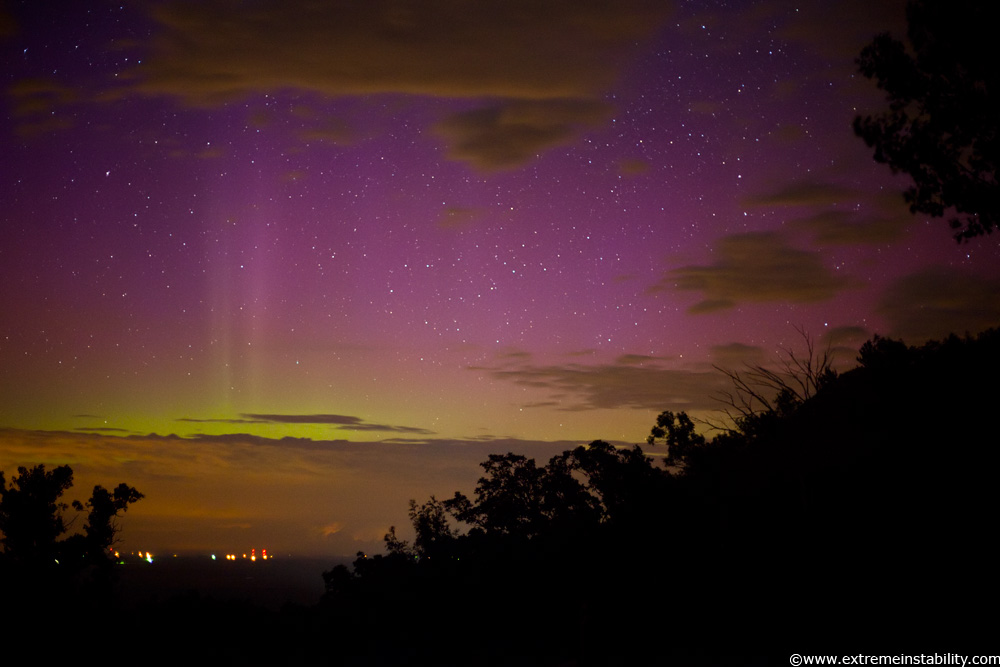 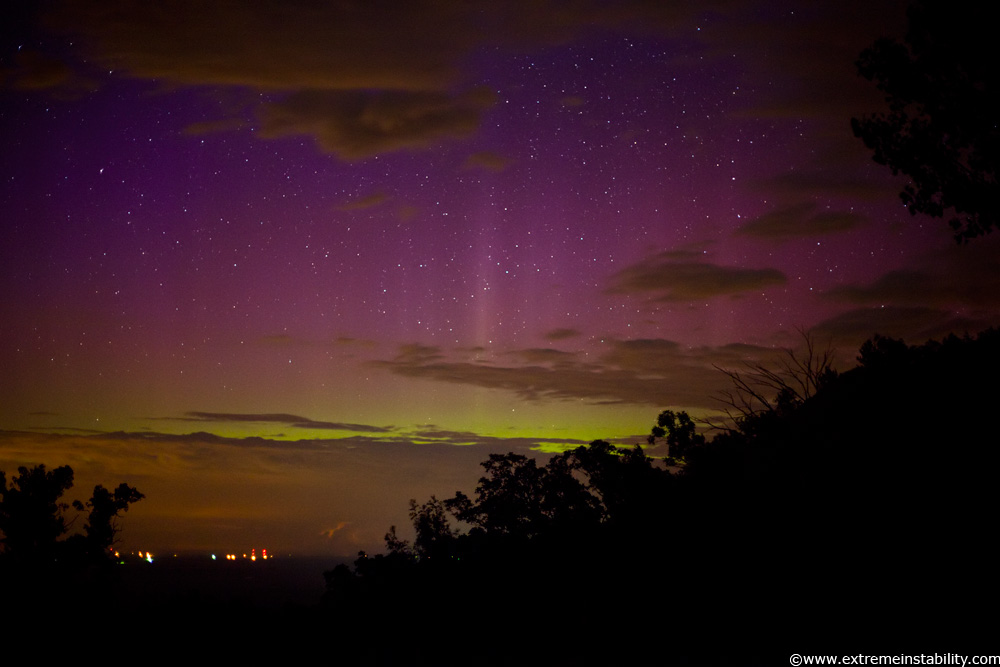 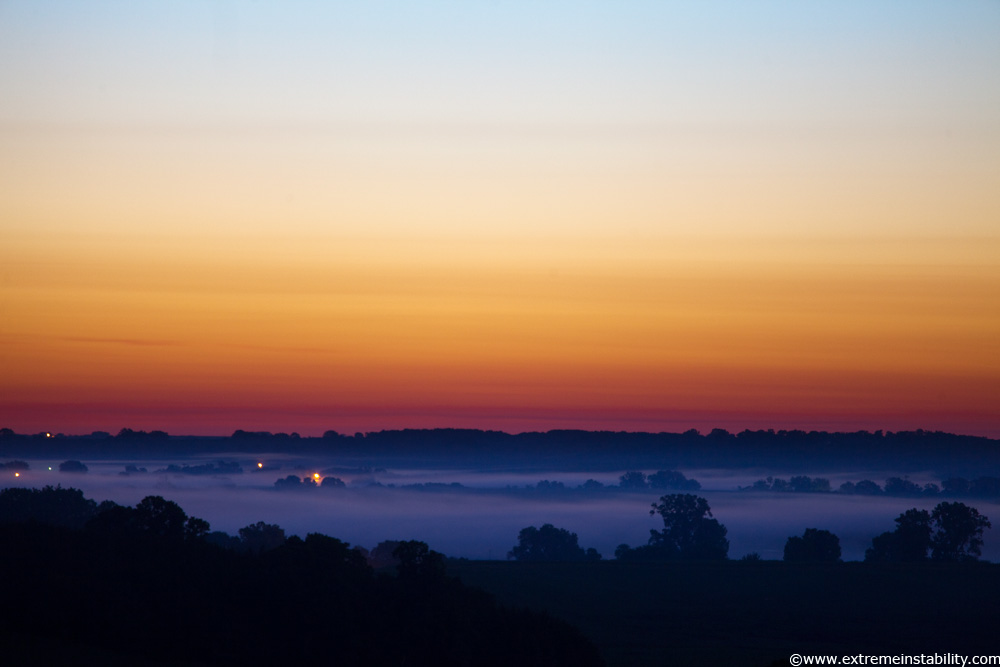 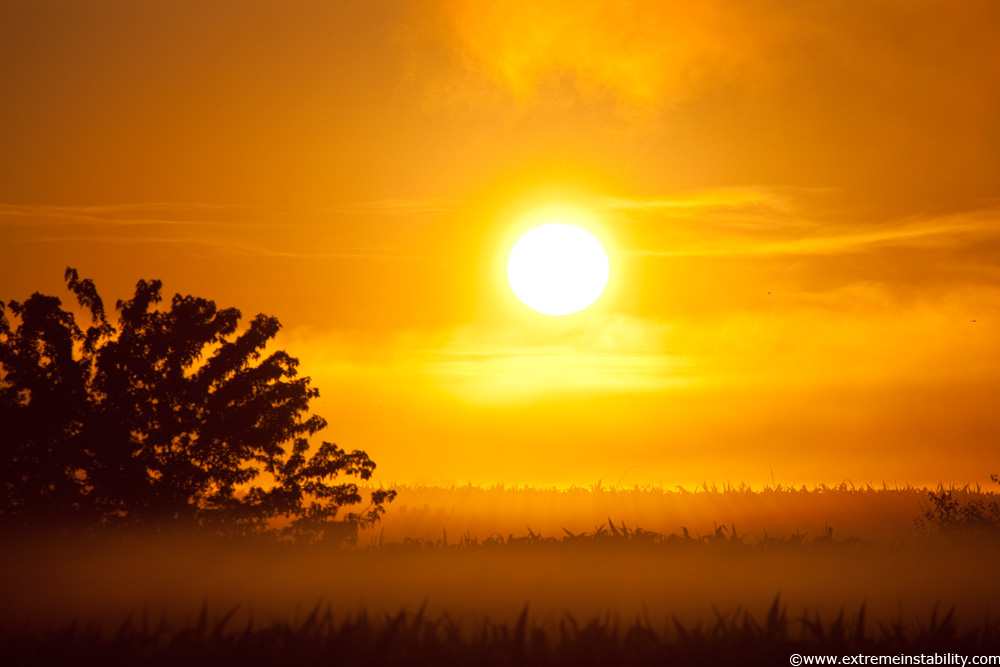 Where's waldo. It was not as light out as this seems. Given I was telephoto I had to try and stop the lens down if I wanted the deer and the background at all sharp together. The only way this would work in the low light was if he held still for the half second the shutter was open. Was at F18. 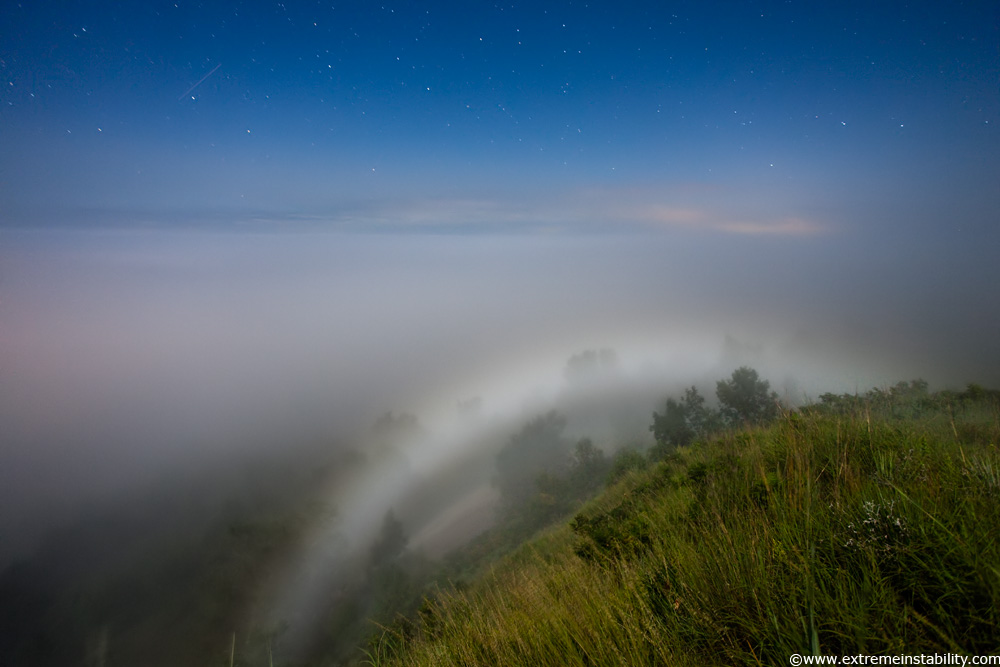 Vivid lunar fog bow from the top of Murray Hill in western Iowa. Such a blast going up there by yourself at 3 a.m. Least with a moon you can see. This hill is extremely steep right here. The moon was almost at its highest point. If you slip down over there you'll for sure slide and/or roll till you can grab enough grass to stop. I swear every time I'm on that edge at night, something comes towards me up that tall grass. I'll make some noises to scare it off, but it never goes the other way! I just stop hearing it. And often it's pretty damn close. 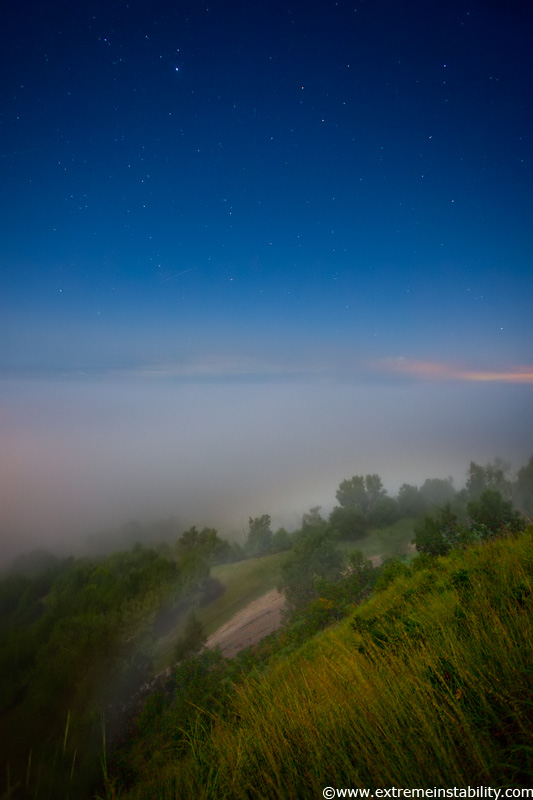 Lunar fog bow vanishing as the low fog sloshes back away from the hillside. 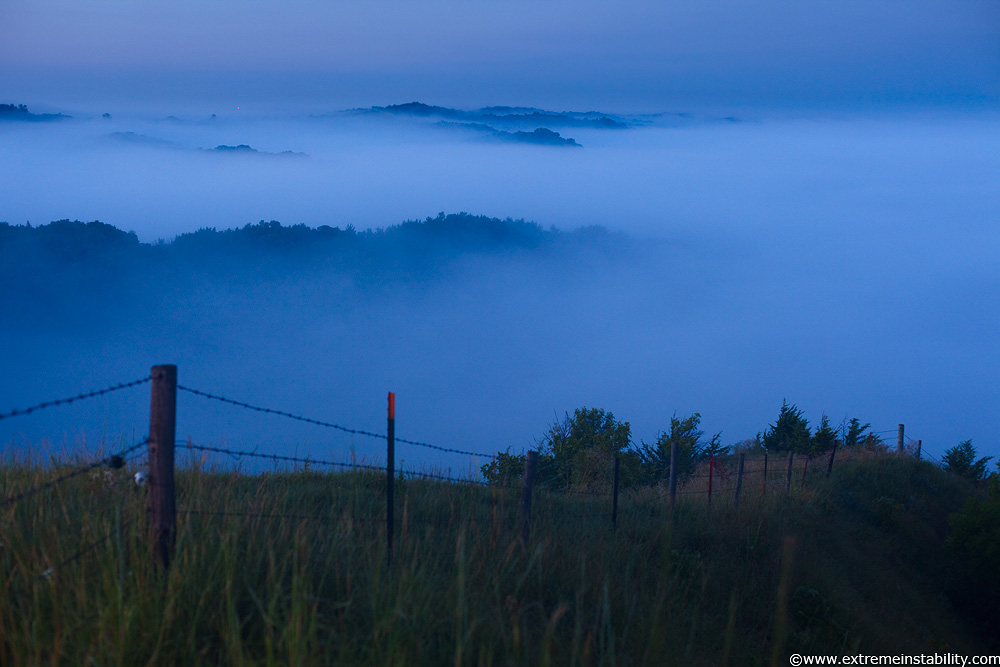 As it got lighter out it got amazing. I'd just about left for home as I was swamped out in fog for a while. Often when the winds go light, the fog seems to lift up just enough you end up stuck in it, not above it. That or it's blown around and then the wind lets up and leaves you in a bunch of it that isn't moving now. 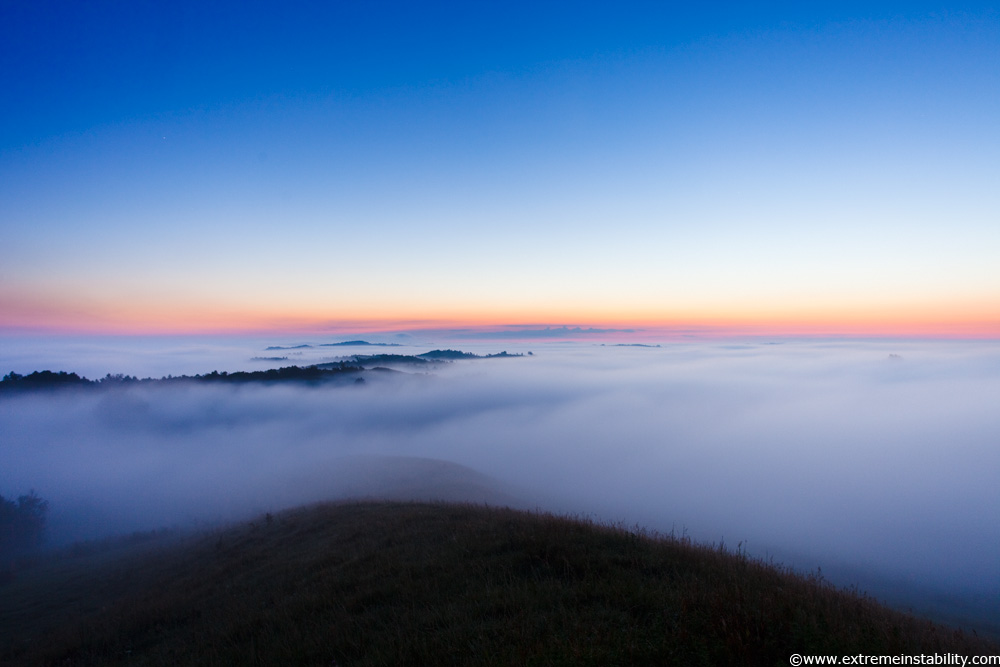 Well all the sudden the fog around me vanishes. It's perfectly calm and the fog all over out there looks flat as a pancake. It was amazing. This is looking north along the bluffs, with the Missouri River flats down to the left. My lord the mosquitoes above my head. I had thick spray on so they weren't getting me. But no exaggeration, I swore there was a swarm of killer bees around me. It sounded exactly like that would sound. Any ol mosquito buzzing your ear is ANNOYING. But this was crazy. I look up and see them above my head. Then one lands on the lens and it is huge. It's like 5 times a normal mosquito in size. Just kinda sucks you get this amazing view but are being extremely pestered by these stupid creations. 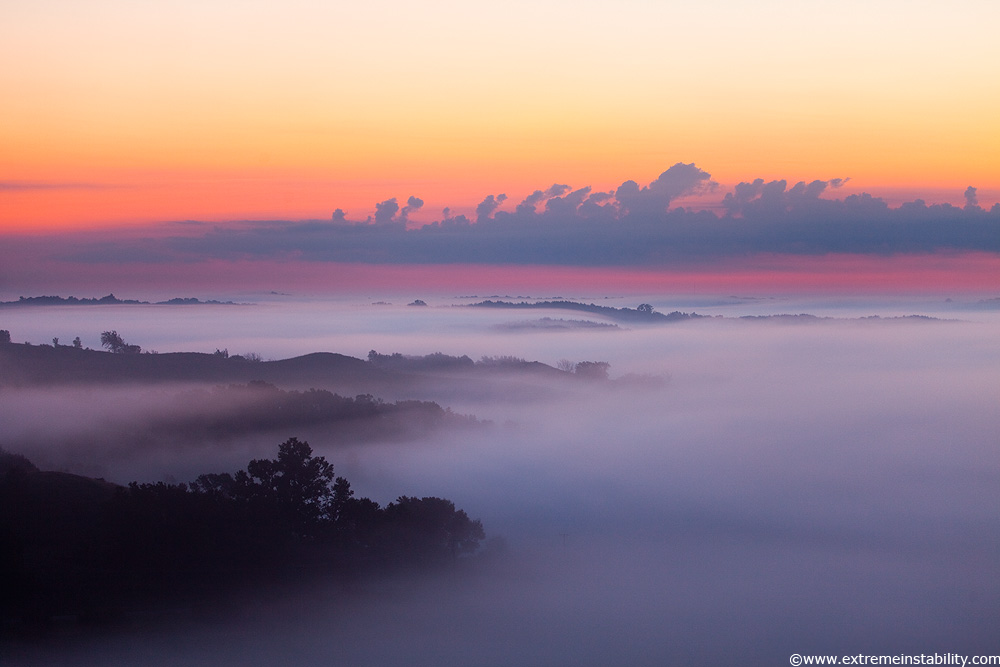 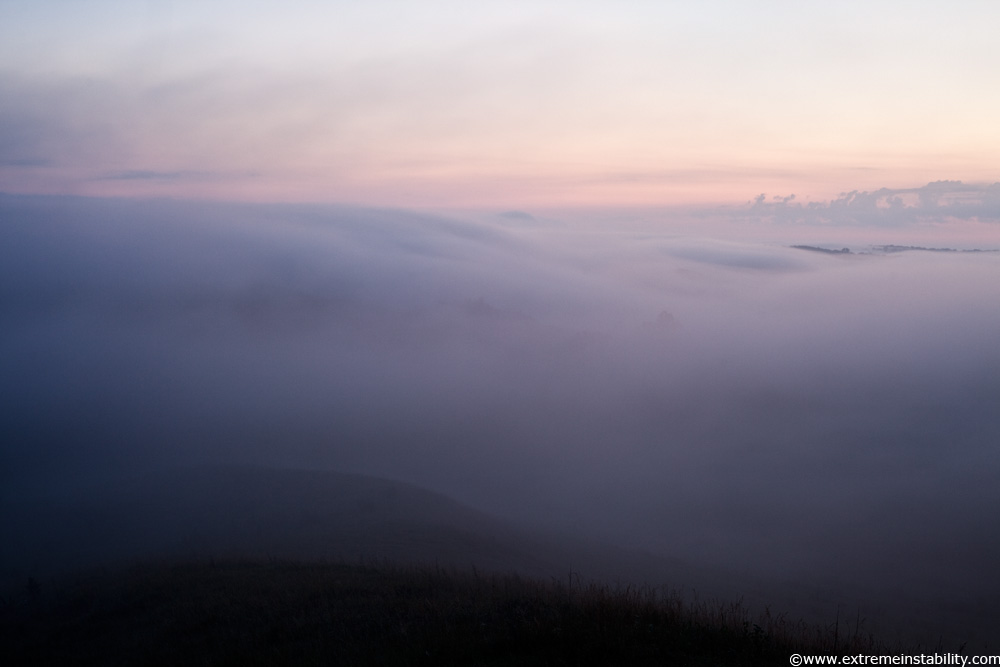 Whenever one gets that crazy view, they can count on it not lasting long. Soon a wave from the north got me. 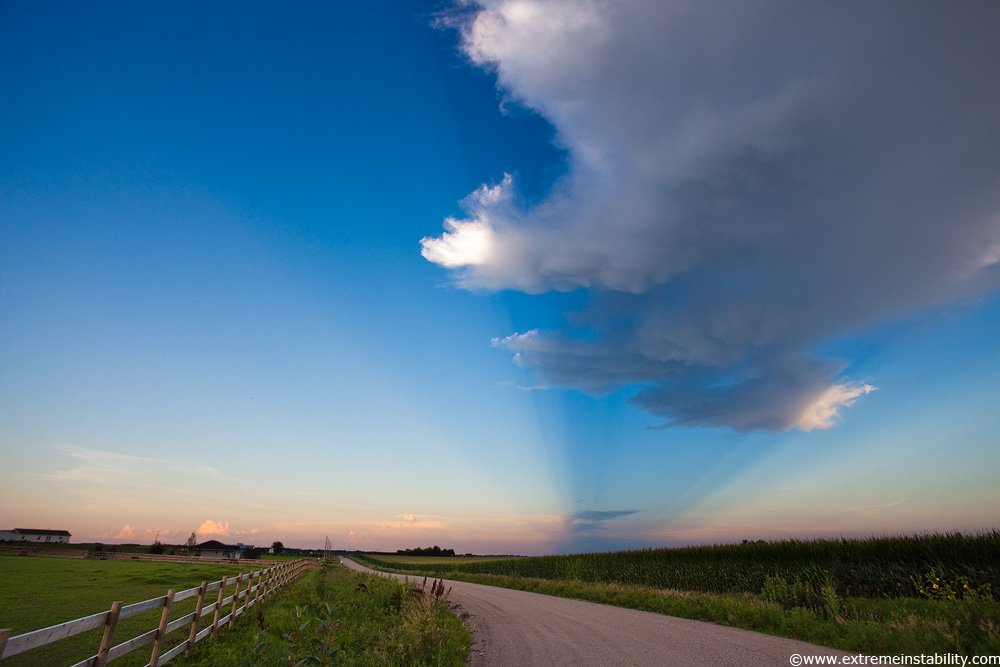 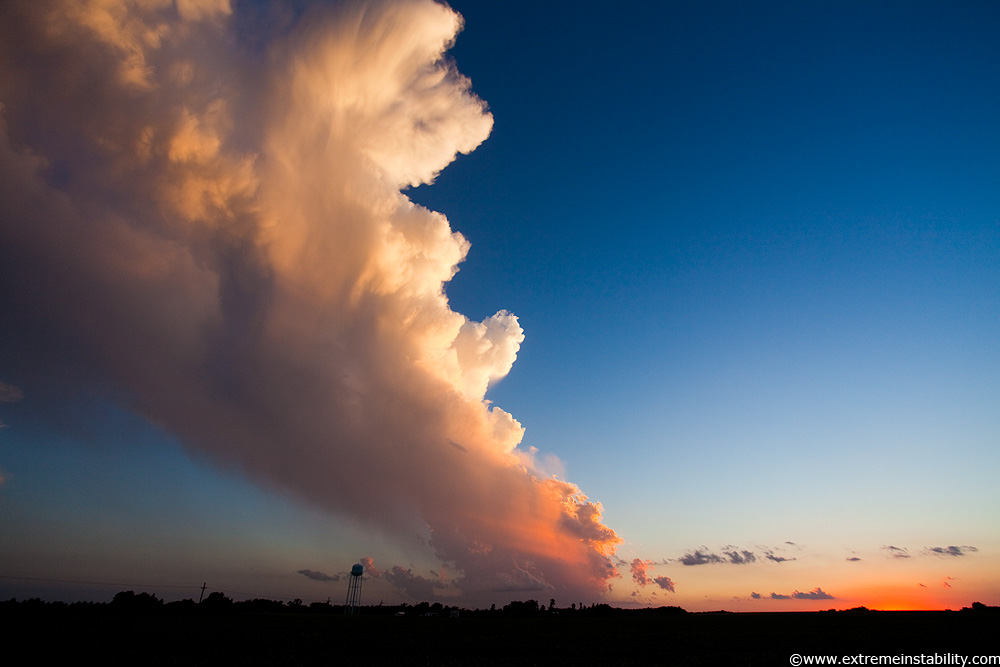 Like a big fire. This near Nickerson NE. I'd driven out to Bartlett area this day for nothing and got this on the way back home, 15 minutes from home. Same updraft and anvil making the rays above. 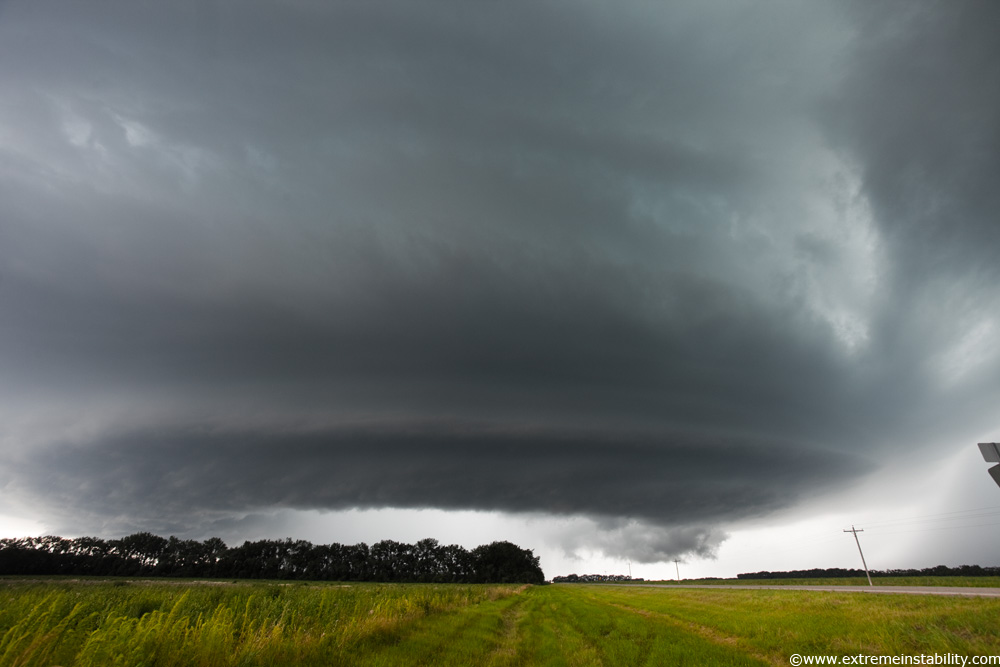 Shelf and CG last week I guess. Looooooooooooooovely mosquito fun on this one. 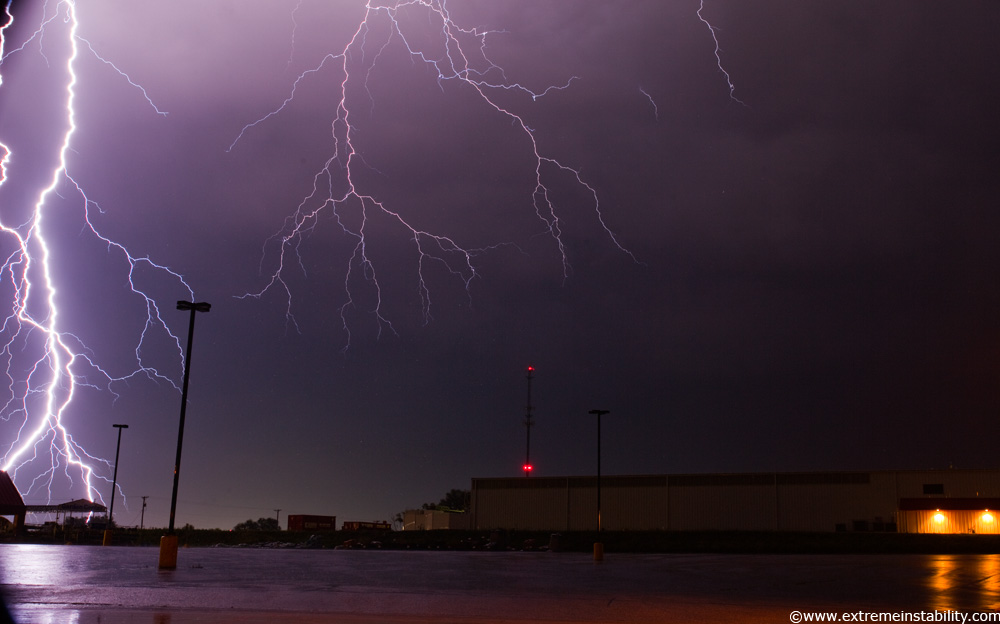 CG not hitting the tower it was supposed to hit on the east side of town(yeah I know, tower needs to be taller). 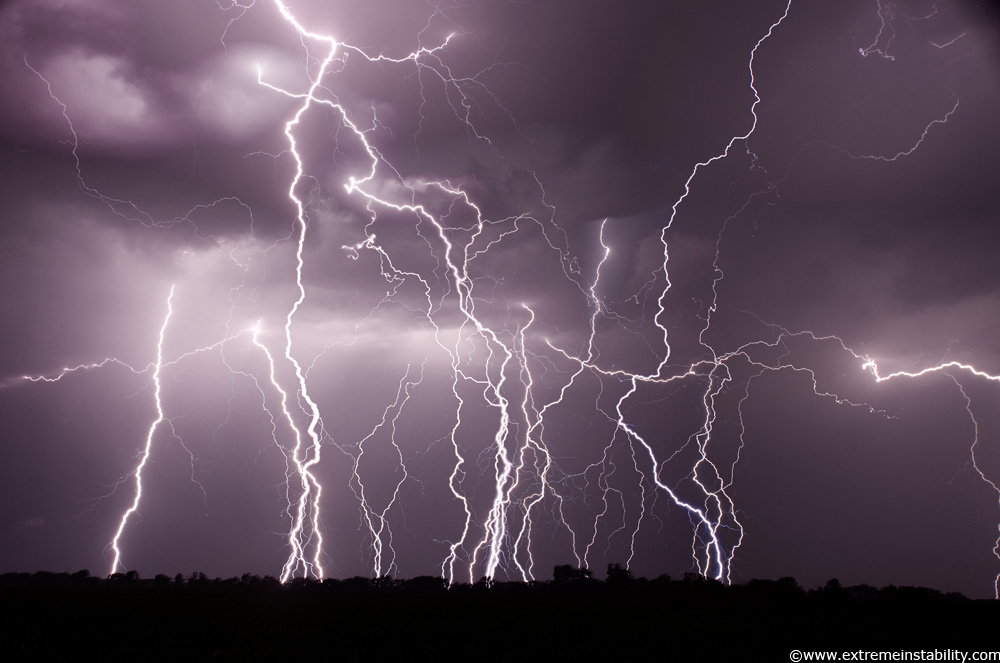 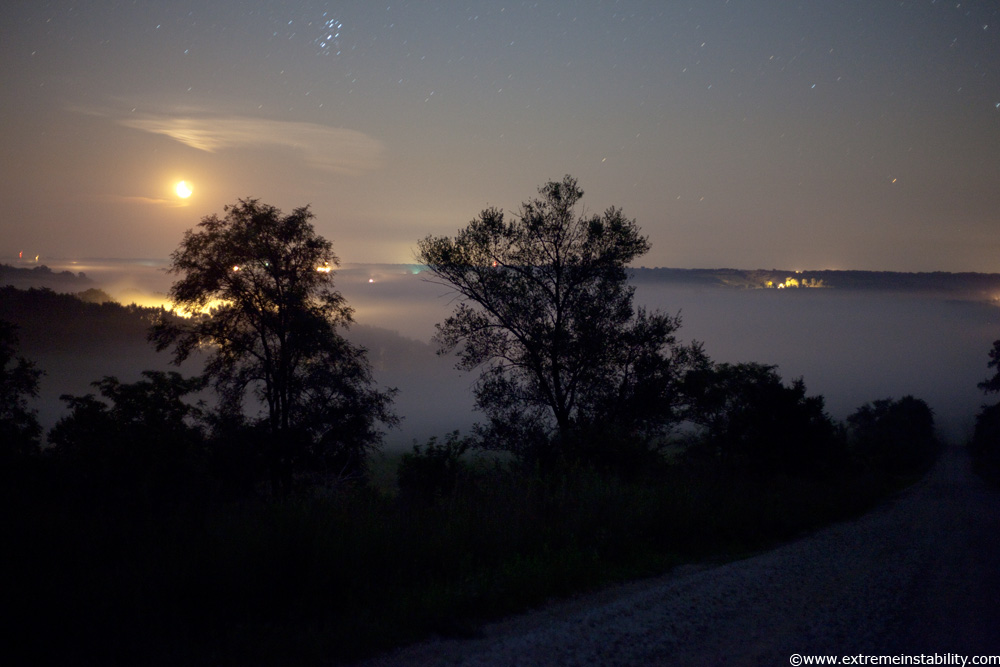 Moon and low fog from north of Pisgah Iowa. Probably 2 a.m. or so. Most amazing audio experience at night took place just before this photo. Coyotes, holy crap. I've heard plenty of coyote packs shooting lightning over near Desoto at night. Those sound like maybe 5-10 of them cackling away, but who knows. Just a typical pack making a ruckus for a while. What started here was absurd and spooky lol. This is a very steep hill and I'm on the east crest of it, middle of the gravel, camera and tripod taking photos. I hear something due north and figure out what it was, very far off coyote. He had to be 2 miles away. It was just loud enough to know what it was and that was it, he was way up there. Well this turned into a freaking crazy wave of coyotes. Yelps and barks slowly coming straight for me, but fast enough it wasn't them moving...it was hand off barking...like the wave at a football game. It was scary the amount of coyotes this must have been. In about 10-15 seconds this went from far enough to just barely be able to hear them, all the way south...ending.........RIGHT by me....RIGHT on the other side of this gravel road/hill. The last one was sersiously within 1 block of me easy. There was a light west wind so they likely weren't smelling me. I'd been there for a bit at that point and hadn't made any real noise. It sounded like it had to be 100 coyotes to do what that all consisted of. So damn freaky too lol. I soon thought, man would it suck to have walked up that hill in the grass where I have before for a better view. Sucked bad enough just standing outside the car, away from it in the middle of the road in the dark. I just thought, they won't mess with me anyway as they are scared of people....but then I was like, hmmm maybe with their billion buddies they wouldn't be so scared. But to have that many yelps come rolling down through the hills in a matter of seconds, ending RIGHT freaking next to me was just amazing. And again, I've heard plenty of coyote cackling by now. That was something else though. There's a state park right here too people camp at. That has to be fun. Of course often after they all do that yelping and carrying on, they don't do it anymore. Just silence and the knowledge there are probably a hundred coyotes in the immediate area lol. Just so cool how they rolled their barks right on down those hills to me. You stand there, wondering just how many there will be that bark and how far that will continue. As it goes and goes and goes....till STOP right by you.