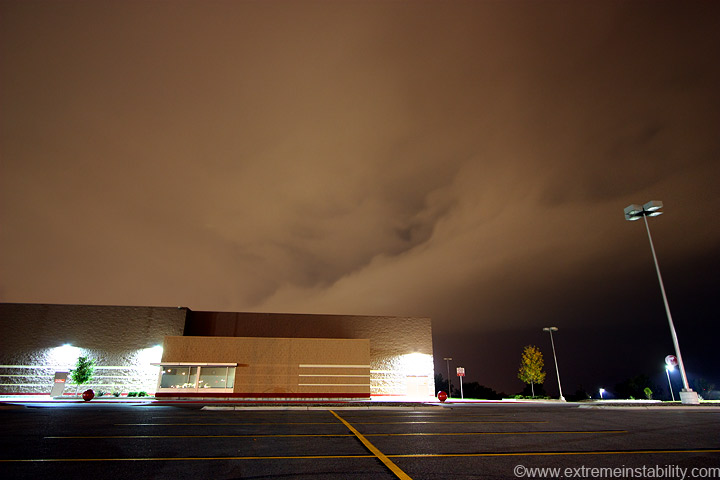 The above was taken in north Omaha on 72nd street, north of the 4 TV towers. I'd wanted to try this again, and well, finally some storms around here. Bout time. The storms, well they were very much pathetic. Hardly any lightning at all. I didn't care, dying storms can still do some crazy tower bolts.

I actually left too early, trying to shoot them from outside of the city before they got there. Well, nothing but hills, houses, and trees prevented me from bothering(near nw Omaha). You'd think I'd have some spots around home for lightning, but I don't.

After seeing a monster deer running with its head higher than 10 foot tall corn, then seeing it "fly off" into the air....well I'd had enough looking around. I'm serious. It looked like a deer till I saw it was in/above the corn, then it taking off. I was like, hmmmm, forget you saw whatever that was. That just throws your brain for a loop when you think it's a large footed animal running, then voila, it's airborne into the darkness. Maybe it was a group of turkeys. Doubt it, they rarely take off.

So anyway, I head into Omaha figuring I can make sure I'm set up and ready for the storms when they arrive. I parked near a Target and set up. I tried some through my windshield to see how clean it was. It wasn't. So I clean it. I even had rain-x for the outside. Still, I was getting glare crap. Before I knew it, the storms were there. First one here is looking west. 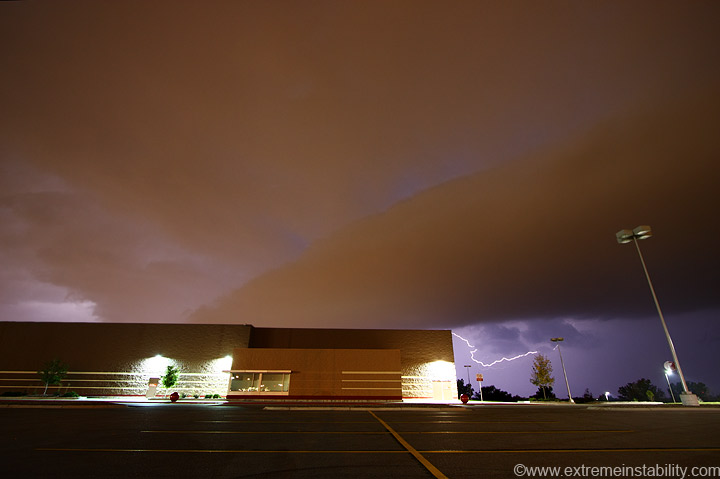 Not a bad little shelf anyway. Other than the tower bolts, that there is one of the maybe 3 others I saw. 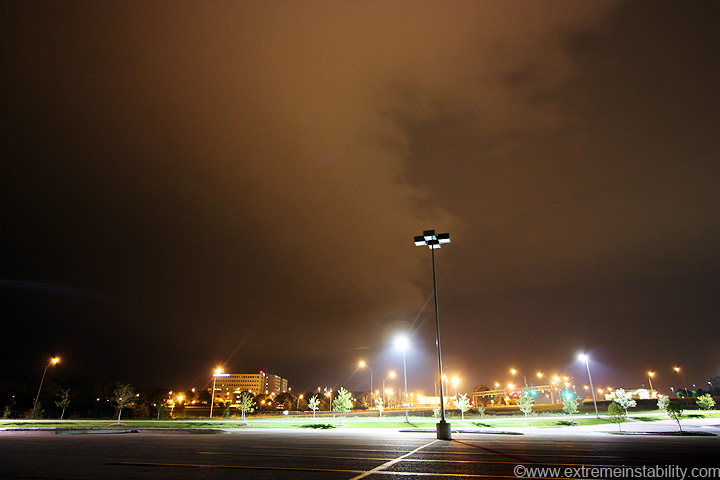 Looking east as it moves overhead, very void of lightning. 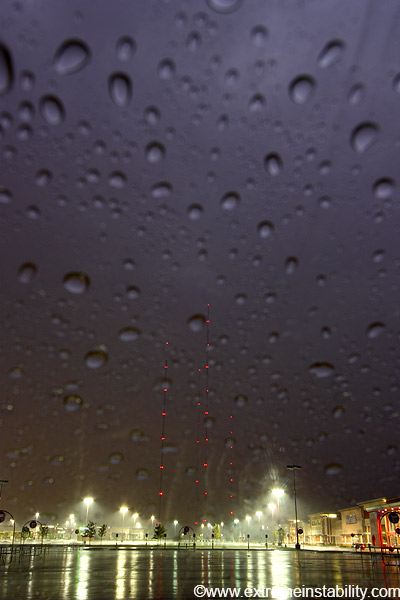 Rain not rolling off my rain-x'd windows. I don't care which way I pick, the breeze is always IN the window. I tried out the window but it just wasn't happening. In the center are Omaha's 4 main TV towers. They are maybe 1/2 mile away. My camera is tilted vertically and I'm shooting at about 22mm on them all. I used the wipers a bit, but it didn't help a whole lot, since it was a decent rain the whole time.

I'd seen very very little lightning. The rain slowed up and I thought, that's it, dry up a little and get the air all "electrified". Funny, seems like that's exactly what happened. Soon as that thicker precip wall moved south she juiced up. Anvil's behind storms are usually rather active. I was hoping this one would be as the air between it and those tall towers interacted. All the sudden bang! I thought, ok, maybe I'll get one more. I never dreamed I'd get 5 more. I tried to remove some of the drops in photoshop, just to see what I could do. The following image is the same as the above. 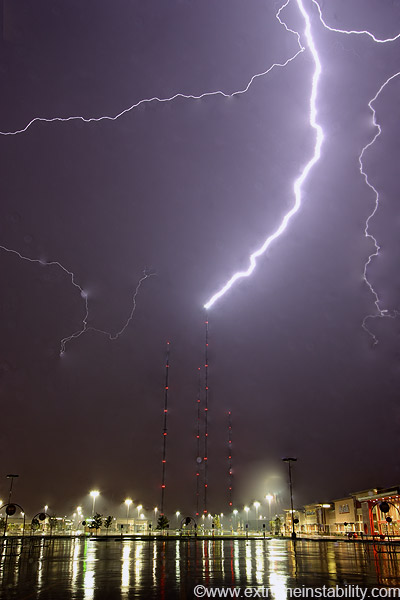 The healing brush and patch tool rule. I'd never tried them before or even knew what they did. A person with lots of practice could take the image full of rain drops and make it so there were no signs of them. I did fair for never doing it before and having essentially zero art skills. In a way, the original looks better. If you are going to go and try and "fix" something, must do it right, or it will just look "fixed" instead of looking original. I figured some might find it interesting that you could really remove all rain drops from a very filled image. Again....that patch tool in there is crazy. I bet even no-art-skills-having me, with enough time, could make the cleaned image look like nothing was done to it to make it that way...because of how simple that little tool is. Or maybe not, the drops right on the lightning channel really throws a wrench into that whole idea. Even the drops near the channel make it a lot harder. All the others though...simple. 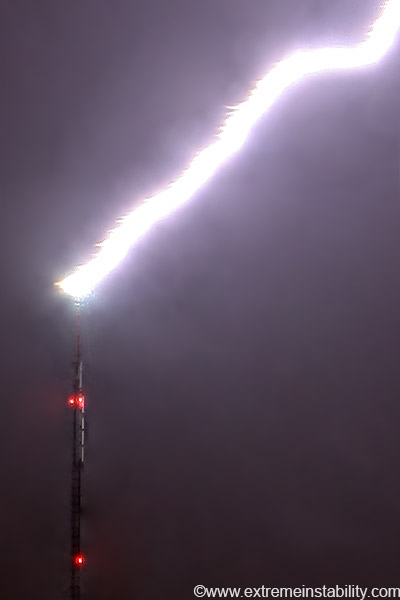 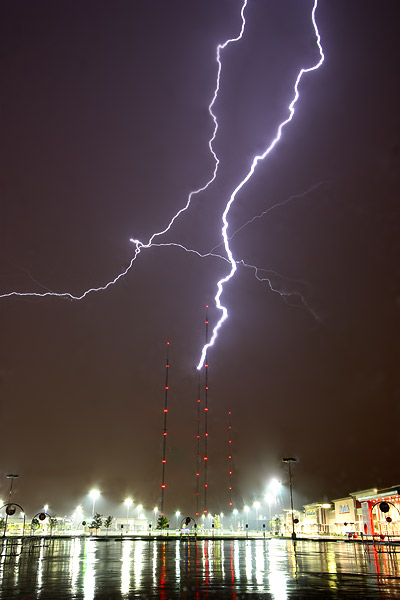 Second hit, this time the back tower. I removed a bunch of drops from this one too. 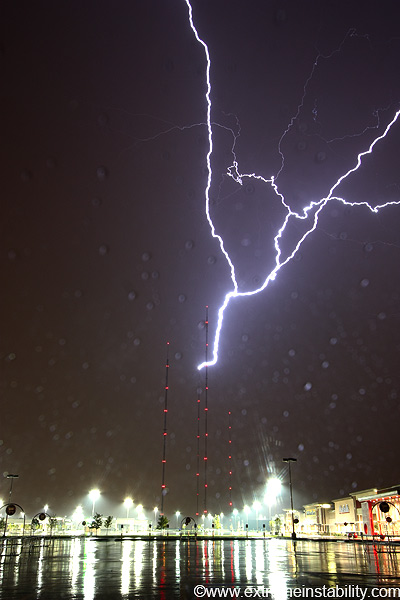 Third hit, again on that back tower. I think these 3 were only 3 minutes apart.

Same hit number 3, just with rain drops mostly removed. Ain't that a little messed up you can do that with photoshop if you want? I didn't spend a ton of time at it either. 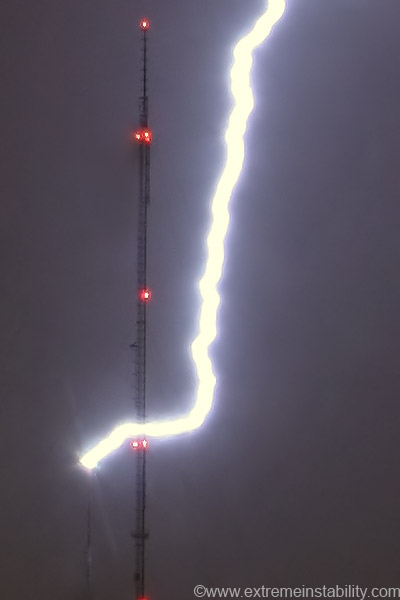 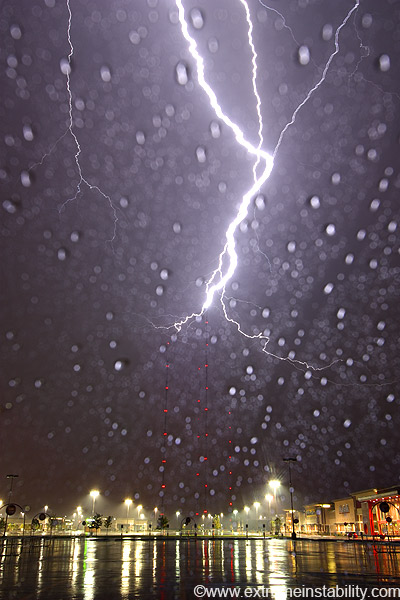 Hit number 4 striking the front center tower again. Still raining on me! Damn it. I didn't even try to remove these drops. Ok, so I tried and it went badly, so I just said screw it on this one. I should have run the wipers harder I guess, but I didn't want them in the shot either. I'd also have to run the car(vibrations...bad) unless I wanted to kill the battery. Many drops were running off but there was just too much rain. Flash lights them up, freezing them where they are on my window. 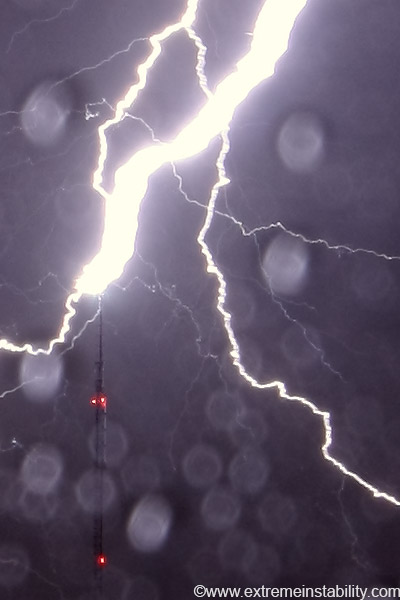 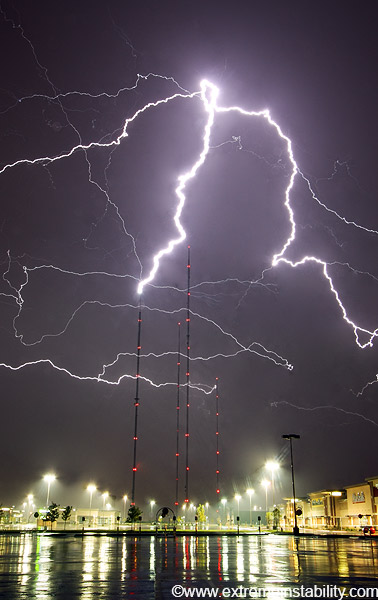 Hit number 5, left tower finally. That leaves one tower. I cleaned the rain drops off this one too. It had a lot of them. 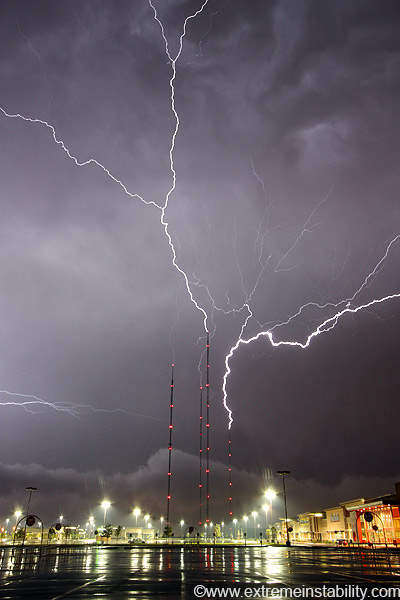 Hit number 6! Right tower finally getting in on the fun. This one actually only had a couple drops, so it looked mostly like this before I removed them. I will build something to do this in the rain and not have to shoot through the windshield. Huge fan to point out the window? It'd have to suck in air from below the car. Not sure what would power it, as I'd have to leave my car off. Or hell, would only need a smaller fan right by the lens I guess. Maybe. Has to be a better way. I want to be close to the towers doing these, so using a hatch back might not work too well. I either have to have a good breeze in the right direction(yeah, never happens) or no rain. Or figure out some contraption! I could have probably done a couple of these out an open window had I considered a lens hood soon enough. That might have been enough shade, but, it would just slow you down when you do get a drop blown in onto the lens. 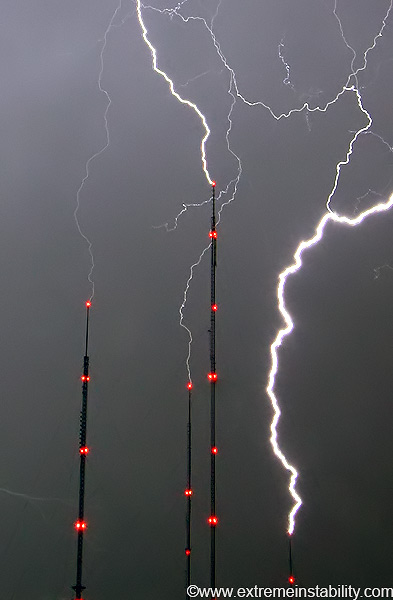 A crop of hit number 6, not quite 100% since I wanted to show all the towers. Apparently the 6th and final hit wanted to touch all 4 towers! It certainly hit the two right towers. I assume it's hitting those on the left as well, since each bolt is dimmer and it'd be odd for them to just happen to end right there in line with the top of the towers.