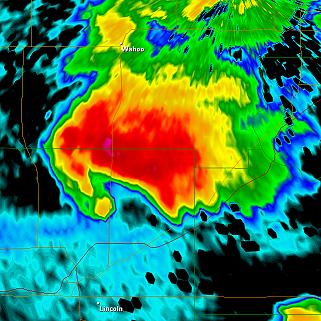 Well, they keep coming and coming and coming. I did some work with my dad, finishing at 4pm. I get home and right away Randy Chamberlain calls saying something about a torando warning. I was like, what!? I flew south and this is what happened.

It was about to munch me on the interstate but I thought I should get gas anyway. Well I might have missed the tornado viewed near Waverly while getting gas, or I got it on video while driving south right after gas. Radar image at 5:00 as it's just nw of Waverly. I think I'm either getting gas at the Greenwood exit at this time or about to.

These are all stills near Alvo NE, south on the Geenwood exit. 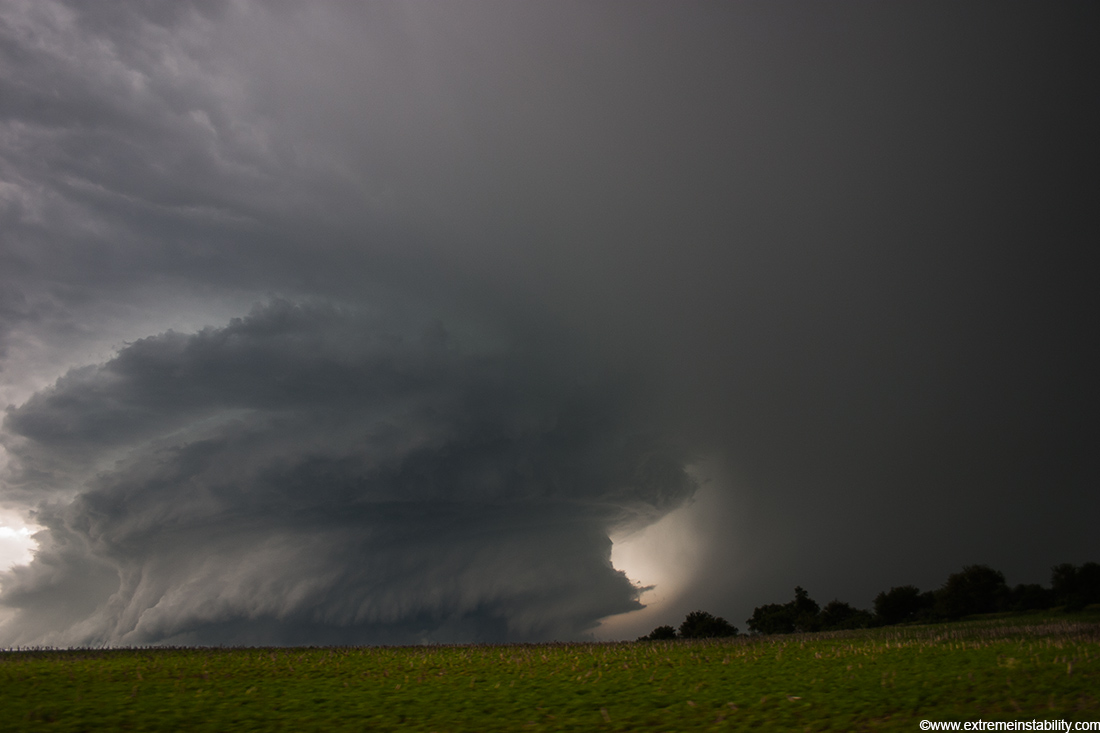 Here is the view west while riving south, almost to Alvo. I was flipping out seeing this to my west. Steve had called earlier, before I could see much of it and was saying he's not sure he's ever seen anything like it. I was like, dang, because Steve usually downplays stuff. Well when I started to see it, I could see he was right.

I knew about a strong upper jet nosing in over se NE today but never thought there was going to be enough instability. I had been blowing the day off. Apparently this is happening in 500 SBCAPE. It is forming near a mesolow and dropping southeast. 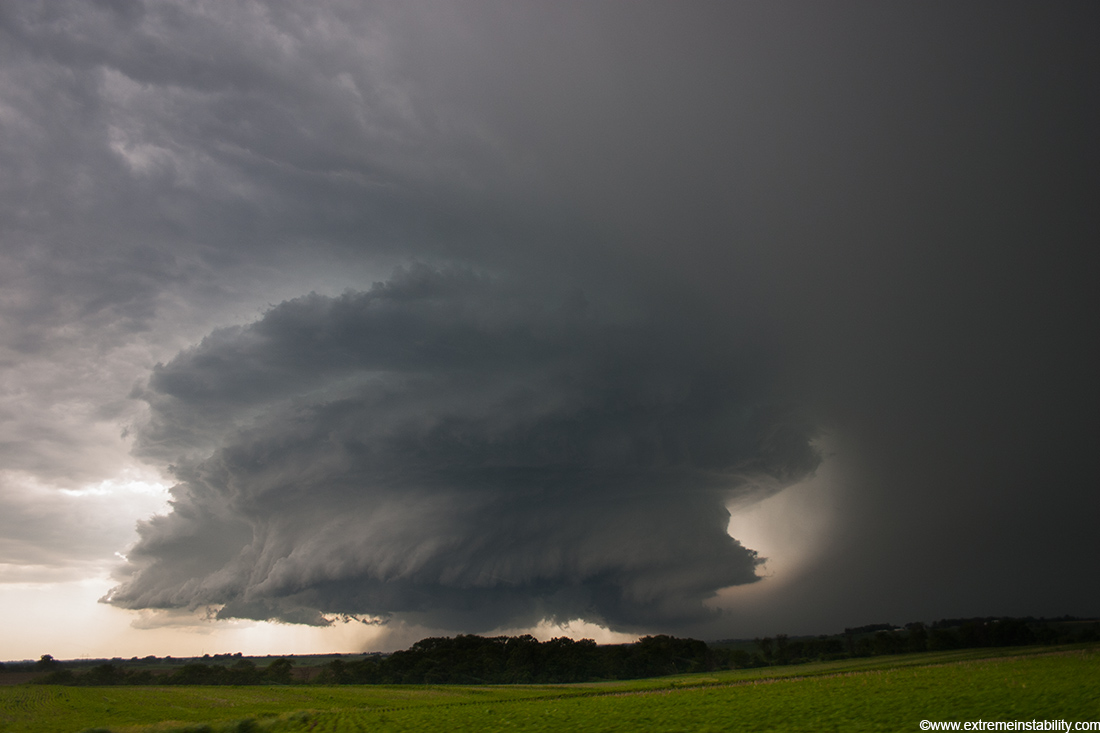 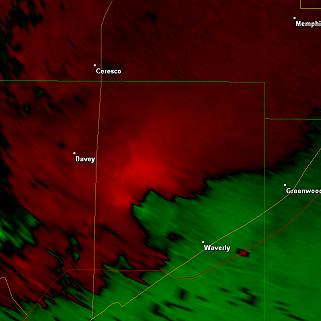 Time of this radar velocity is 5:08 around the same time as the picture above. 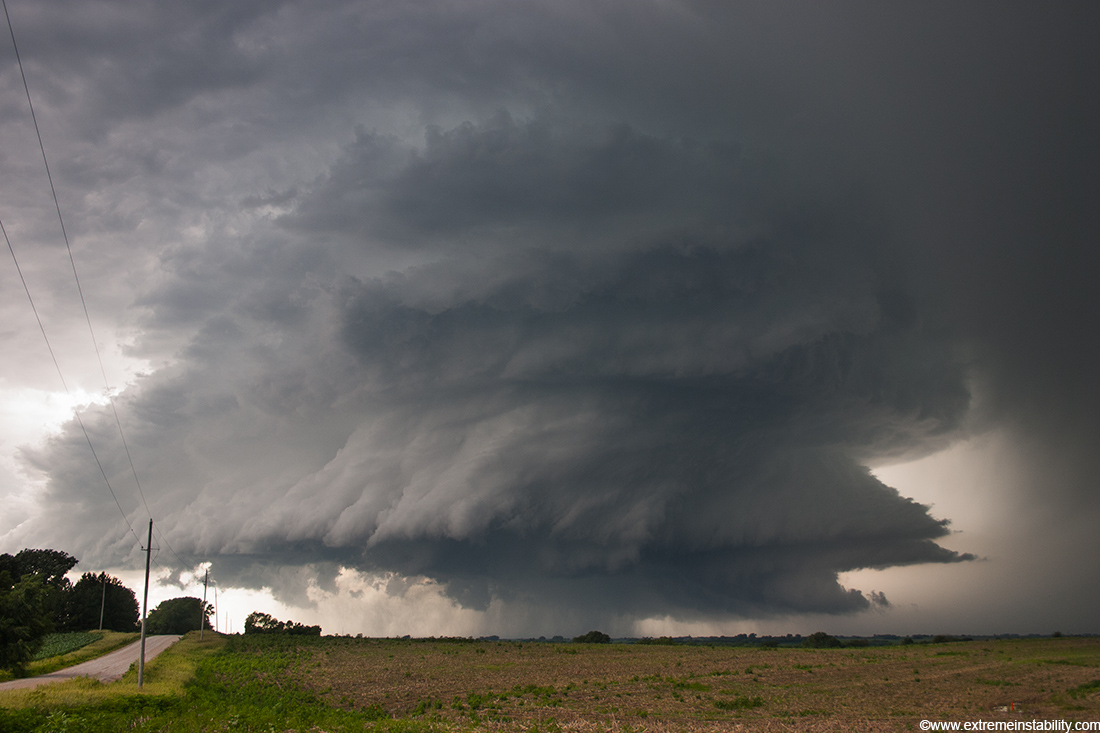 I pull over here and am having a cow on video. I must have said, "holy cow" 10 times. To think it was about to become even wilder looking, all on a day I was not expecting much. 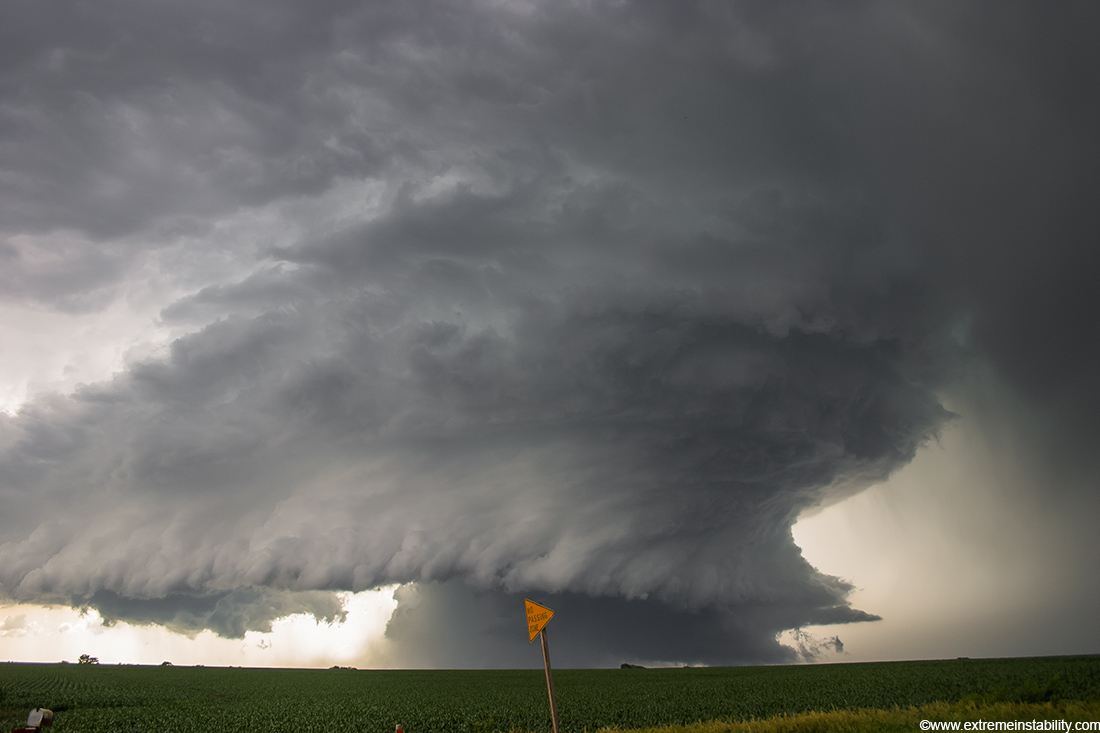 I quickly stop north of Alvo, before moving a bit more south. 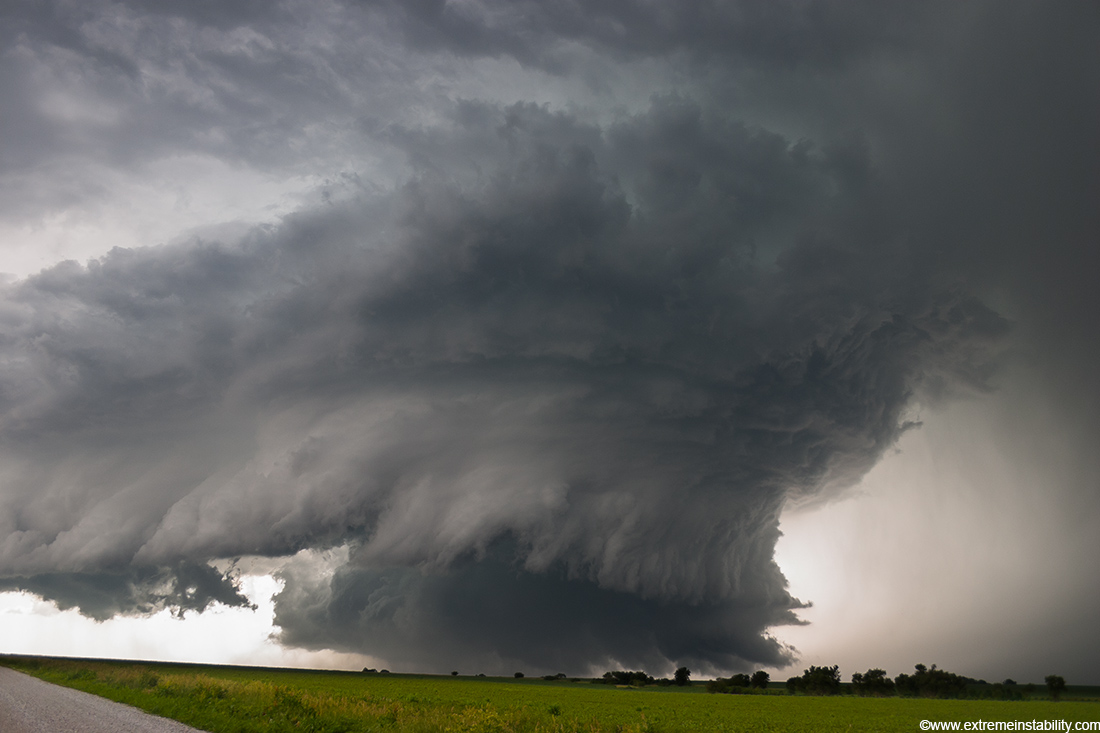 I pulled over, set up the vid cam and set my chin on my window in awe. Radar above at 5:21, close to same as the image. Notice the boundary on radar and the interstate. The boundary grows and spreads south and west with the storm as it drops se. 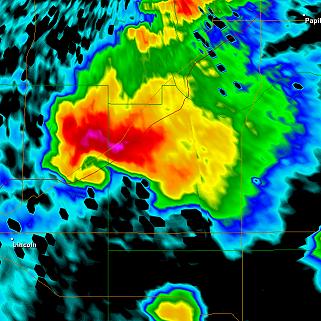 Zoomed in radar image as it's on the interstate near Waverly. 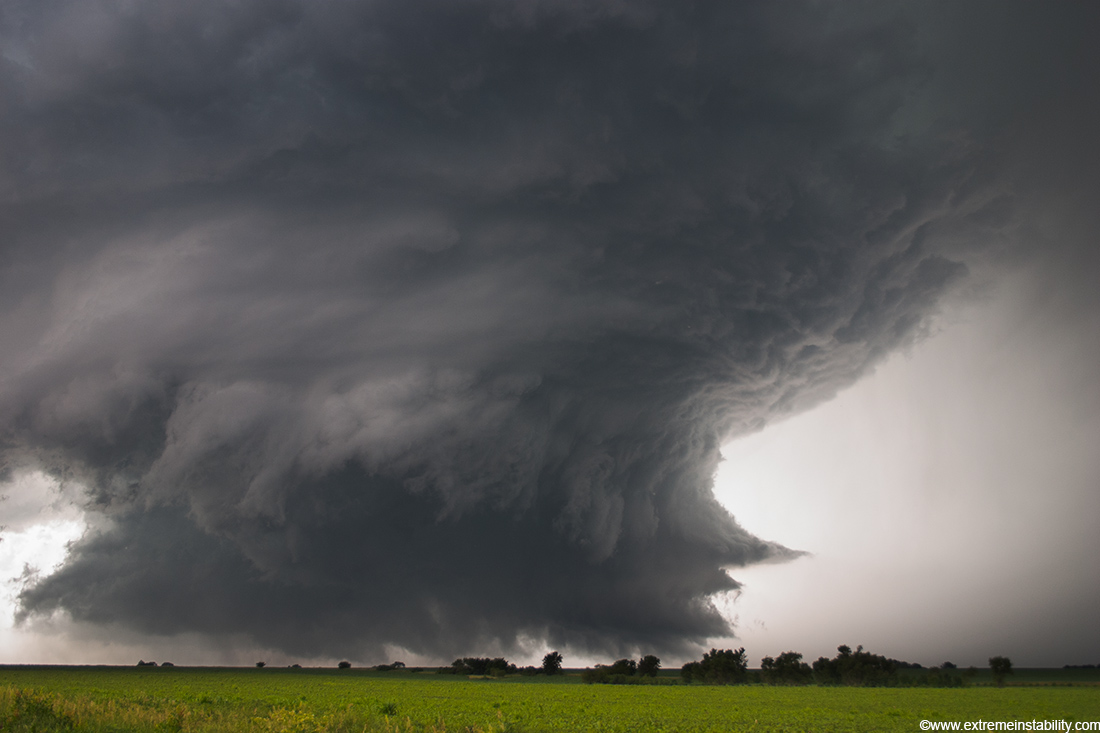 It is really rotating and getting rather crazy looking. You could hear a constant roll of thunder as it approached but never really see any lightning. The sun was really back-lighting this storm now. The more direct back-lighting you get the more it makes clouds look black. Also during this there are some birds chirping. The chirping gets kind of funny as the storm moves closer. It is like they know and are chirping a lot less. You'd hear an occasional chirp and notice it almost sounds like an "oohhhh crap" chirp. 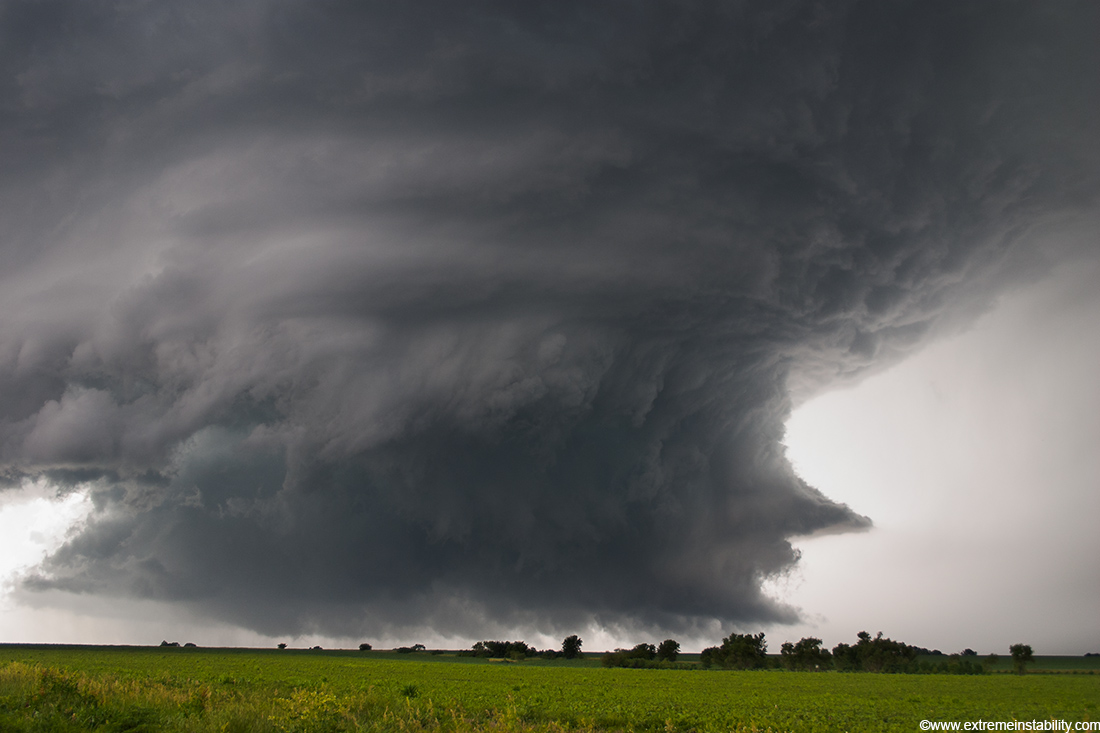 The video time lapse of this should be pretty cool. Small tornadoes soon form in the area towards the left side of the picture. Hmmm, now I'm kind of mad I never got a wide angle shot with them on the ground. I guess they were so brief I never had time to think about doing that. You could insert one under there now with your mind as the structure doesn't really change in the next minute before they happen.

Notice the slot in the middle of the storm sort of splitting those two lowered areas in half. That is the rfd wrapping around in there and chopping that back portion off. Some strange, small tornadoes soon follow this process. This sets off some rather rapid rotation in that occluded area(some of the fastest motion I have on video). 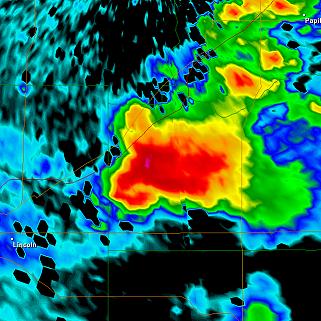 These were actually moving very slowly. Time 5:33 south of Alvo looking west. I'm zoomed in with my still camera now(well not a ton...55mm) so the RFD is going across infront of those tornadoes, then north and wrapping back around and going south behind them.

Their evolution is really interesting as one funnel seems to split apart, like it was actually 2 intertwined. I can't tell if it was just the one coming across the other and that happening or if one vortex split out into that odd behavior. Watching the video it certainly looks like one of those comes appart into two wrapped around each other. I can't say that I've ever seen something like that on video before. 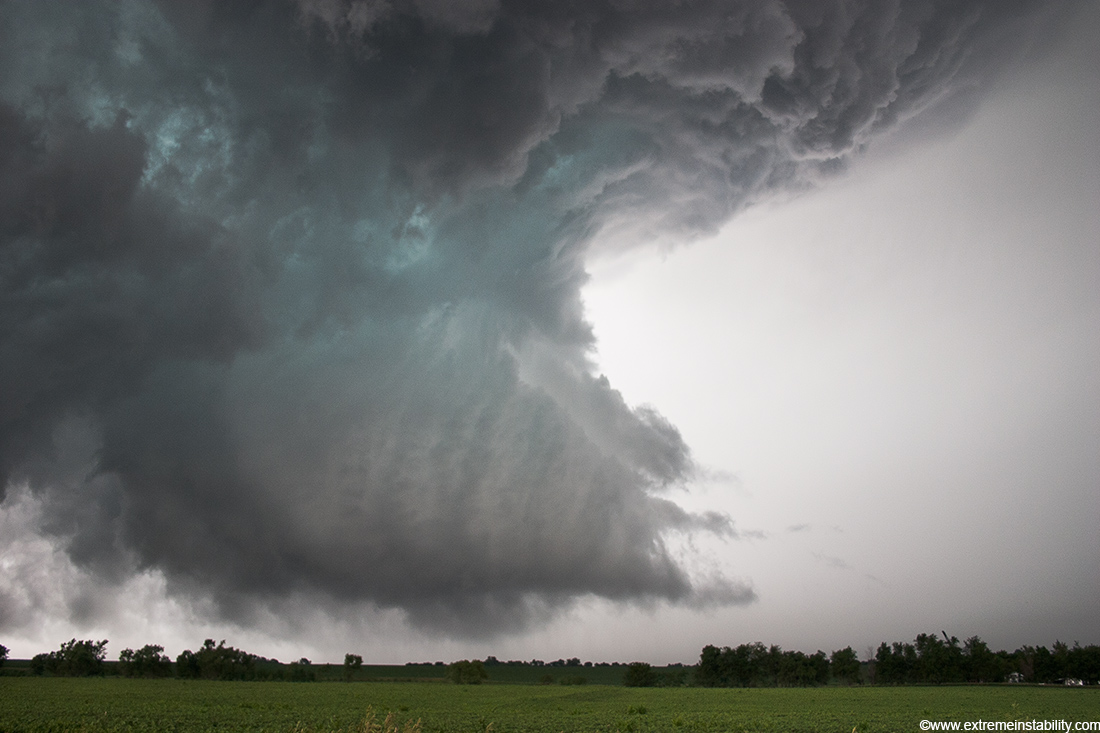 This is a shot while it's tornadoing to the left. The tornadoes stop dancing and rain quickly wraps up the area. You could still see rotation in the rain bands. I let the rotating rain bands almost get on me and then race south to go east. Well I really underestimated the speed at which this thing was going to surge southeast. I was going 70 mph east and had clouds going past me in the rfd. This amazing storm was rapidly falling apart. 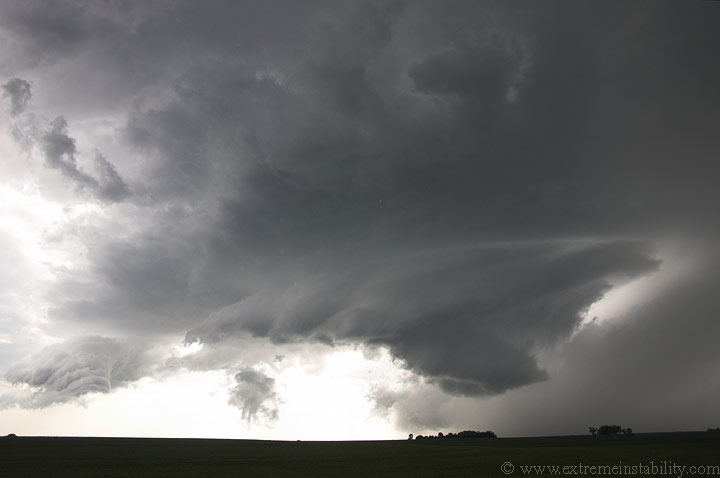 I get east of it, drop south and look back to the northwest and look at it! That rfd blasted it to pieces, more or less. It raced out ahead of it and left it hanging there with no more surface juice to use. Note the scud in the upper left part of the image ahead of the storm. 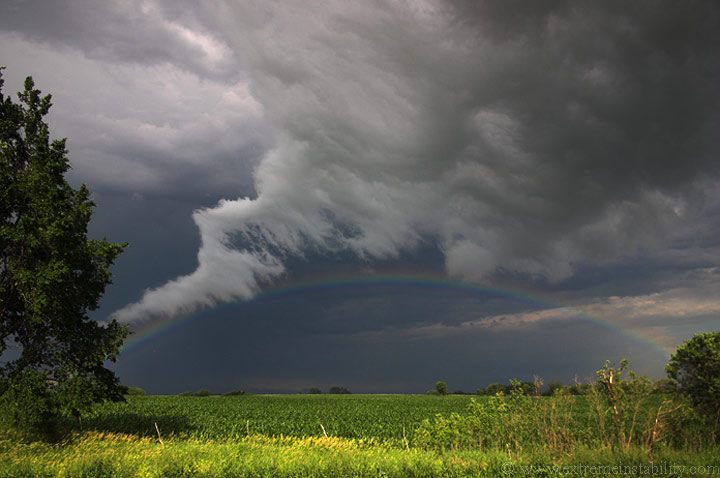 It flew se and continued to vanish into nothing. This storm goes completely bye bye and I think the day is over. 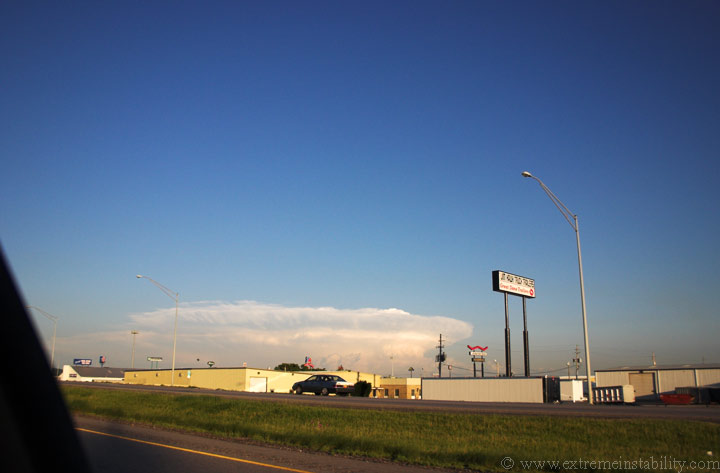 When it died I talked with a couple tv stations in Omaha and agreed to bring them the video. Halfway back to Omaha I notice a bomb of an updraft going up in its path. I could have caught it again had I not kept driving into Omaha, but I had told them I'd bring them the footage. While talking to the met at the one I asked him about the storm. He was like, oh it is toast, done, nothing left of it. I was like, umm, it is back. He didn't seem to believe me much and went over to the monitors and computer. It was already tornado warned again! I went down I-29 and tried to catch it but figured I wouldn't make it before dark. I turned back around and headed north. I'm actually in Omaha during this shot and that storm is in nw MO. It looked really impressive from the interstate. Not very often a storm dies like this one did and then reforms a few minutes later. I've never seen something go from impressive to nothing then back to impressive in less than an hour.