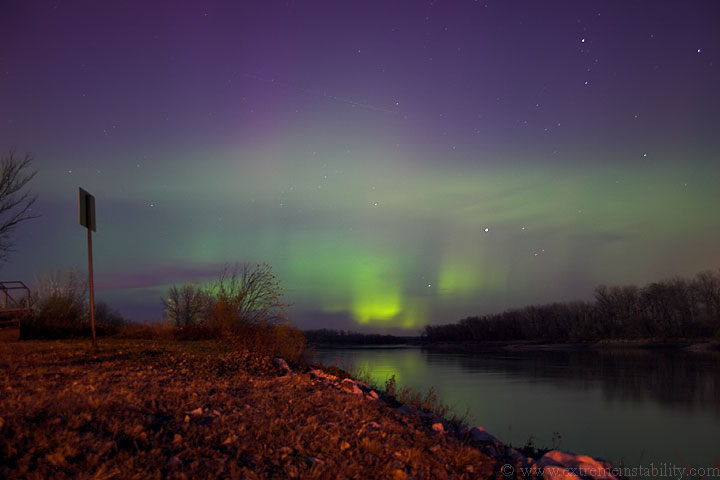 This was shot just north of Blair Nebraska, along the Missouri River, shortly after sunset. I used a digital ISO of 200 on all of these. They were shot in RAW format with a canon digital rebel(300D) with the kit lense(18-55mm). They were stronger shortly before this but I wasn't there and setup yet. For those that have never seen auroras they do not look this bright to the naked eye. Longer exposures with a camera can really bring them out. 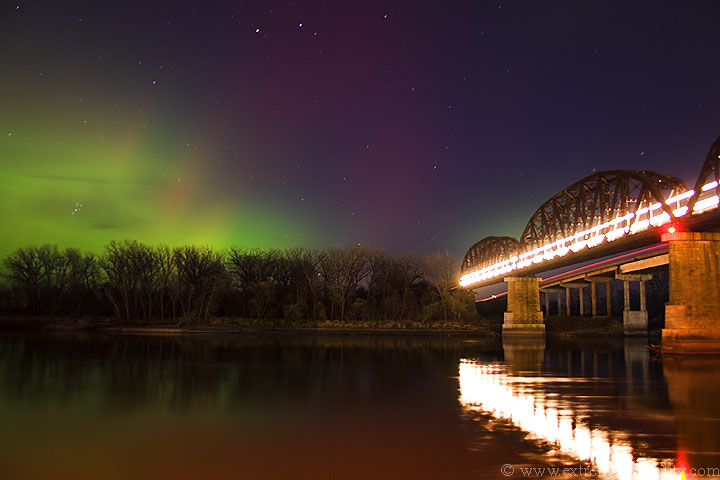 You could even see greens looking due east like here. Some areas were even showing green to the south. 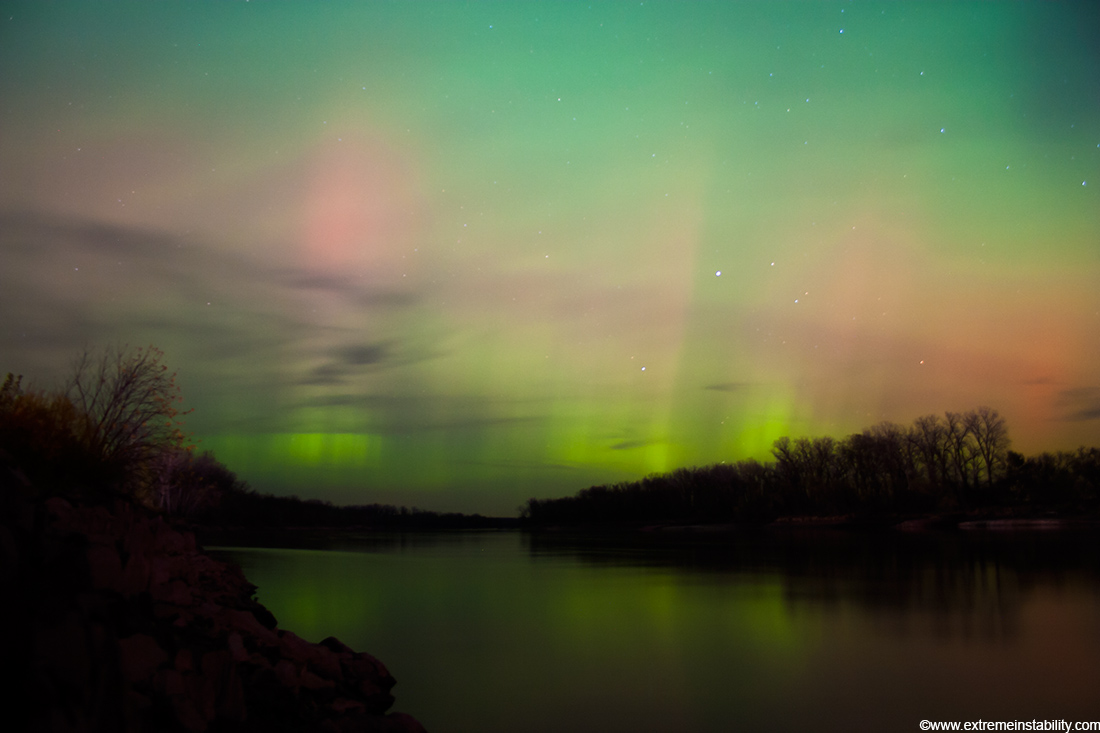 They briefly wanted to pick up strength again starting here. Note the wave appearance above the pillars/rays. 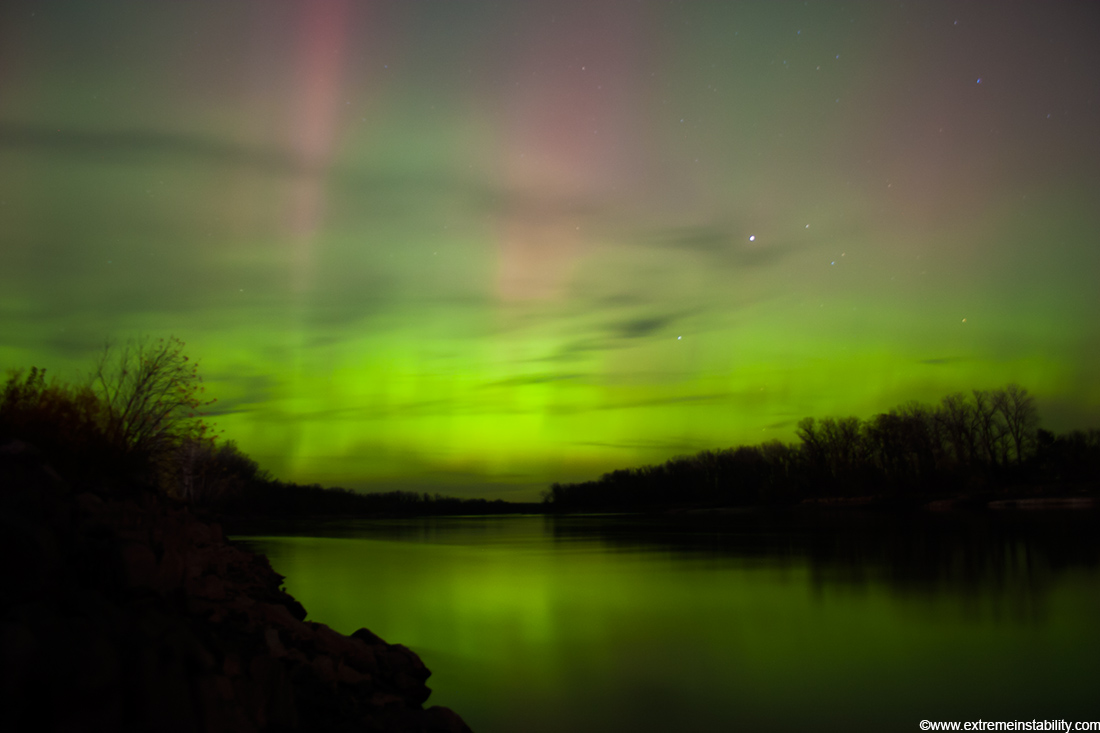 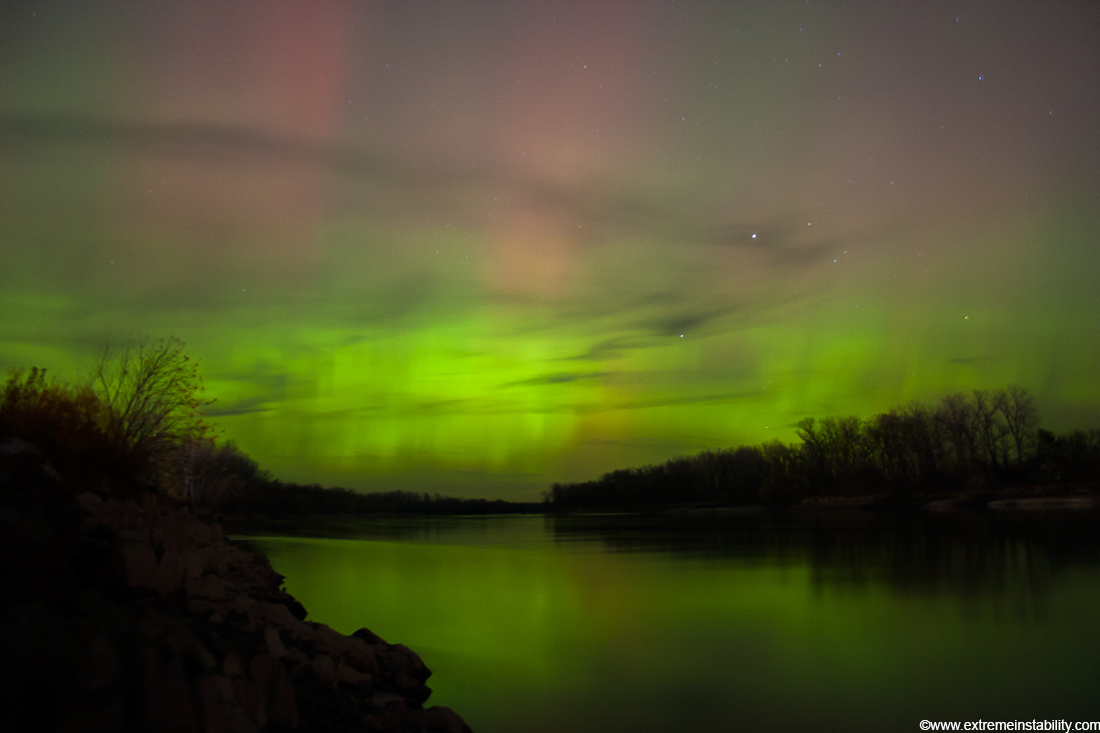 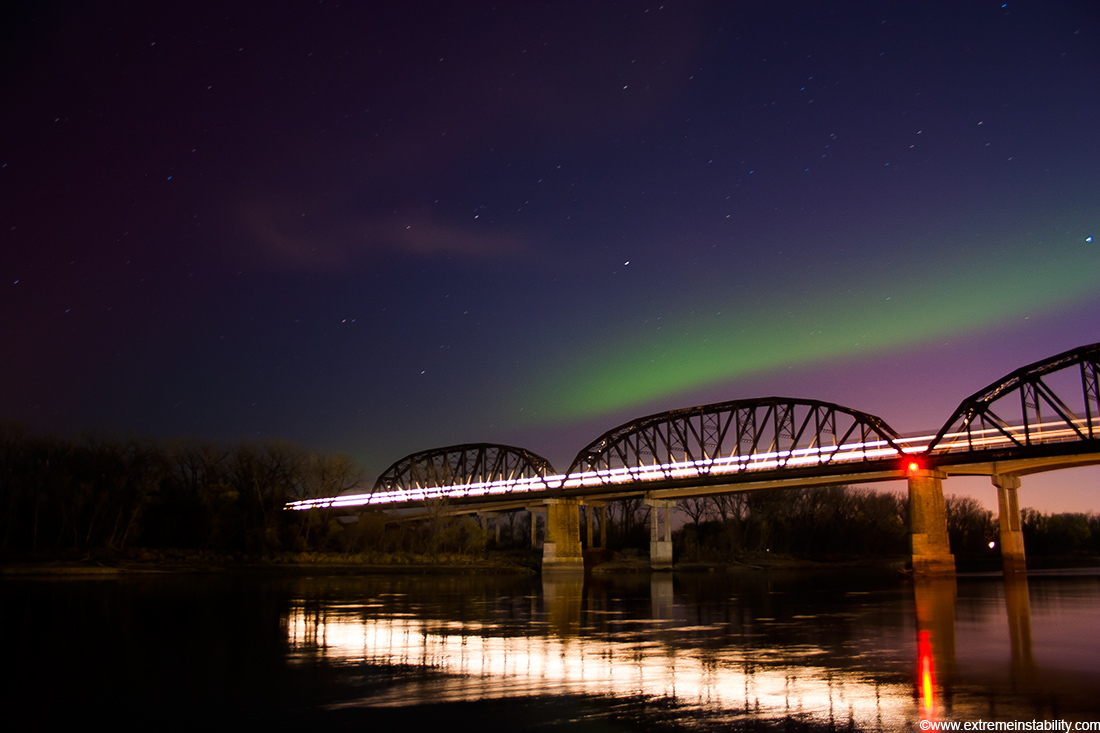 This is looking mostly south! That green line is well south of straight up. 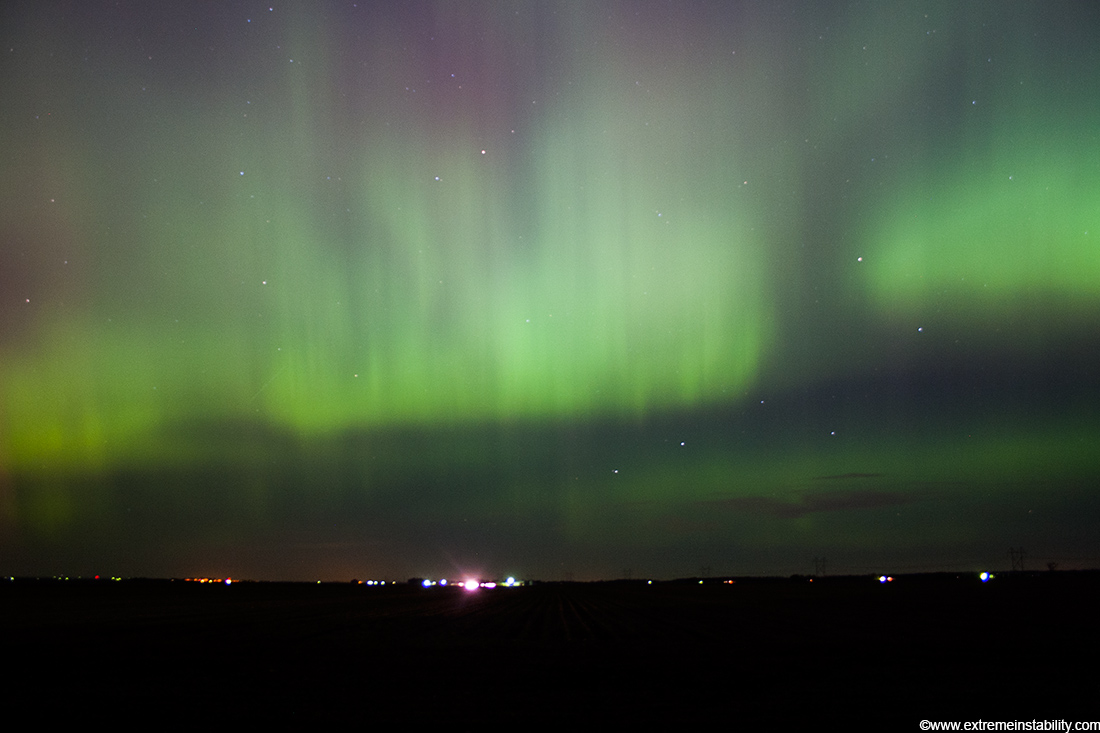 The show more or less dies off so I go back home for a while.

A few hours later another peak occured and was different than all the others of the night. These were very close looking. They didn't look far off the ground at all. This was around and shortly before midnight. 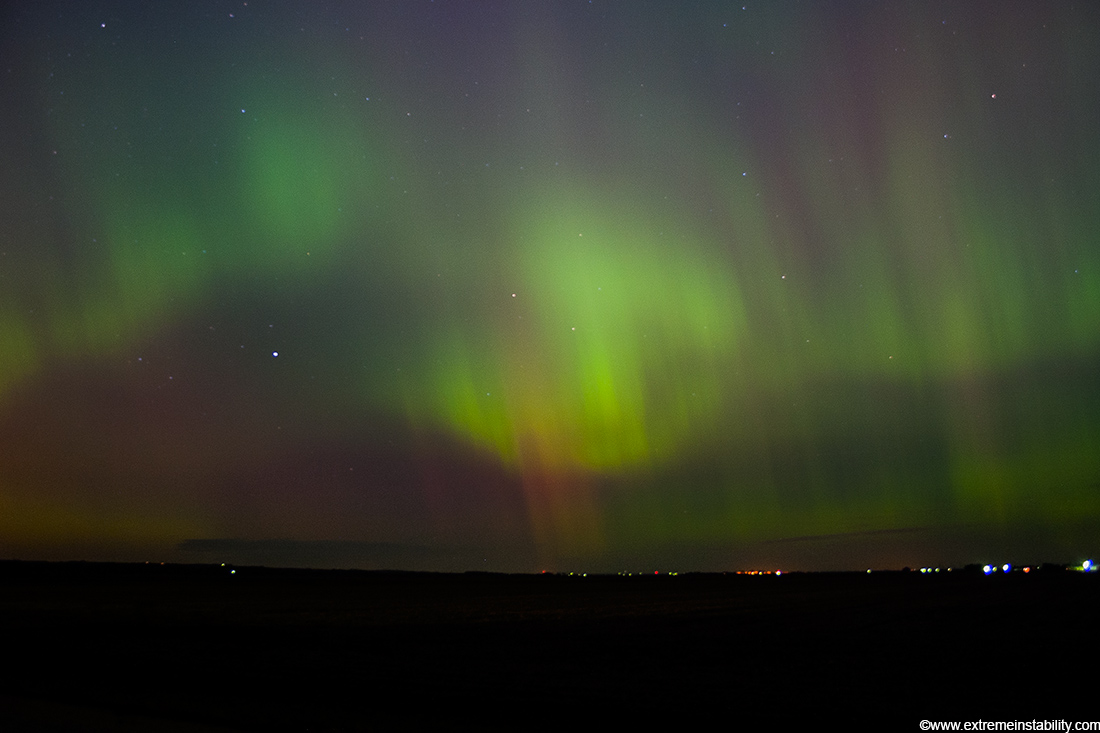 I'm north of Blair on the flats.

Back at the river and bridge, looking north up the river. 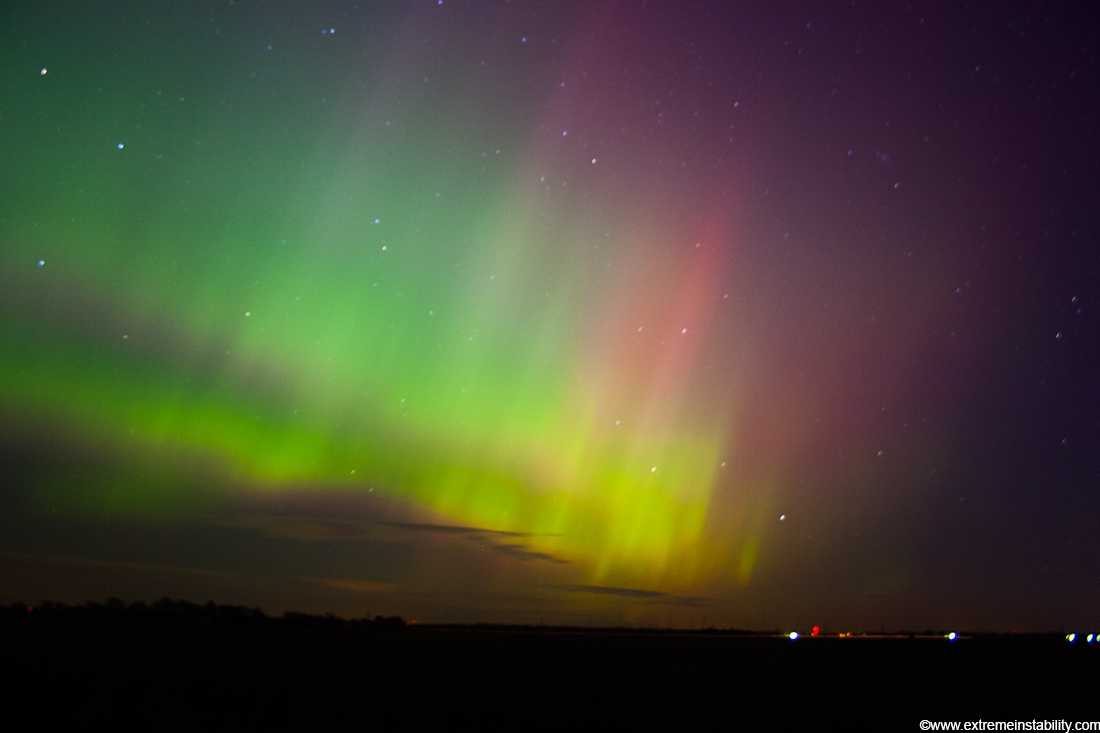 A peak just getting going. Back to the flats north of town. I stay here for the remainder of the night.

This had weakened from earlier and went well back north to just a white ring. Then I noticed it drifting back south, but now getting stronger. It was so amazing when it got overhead and you could see these high speed vapor flashes going crazy overhead and to the south. It looked like fog moving faster than 1000 mph as it'd flash around. 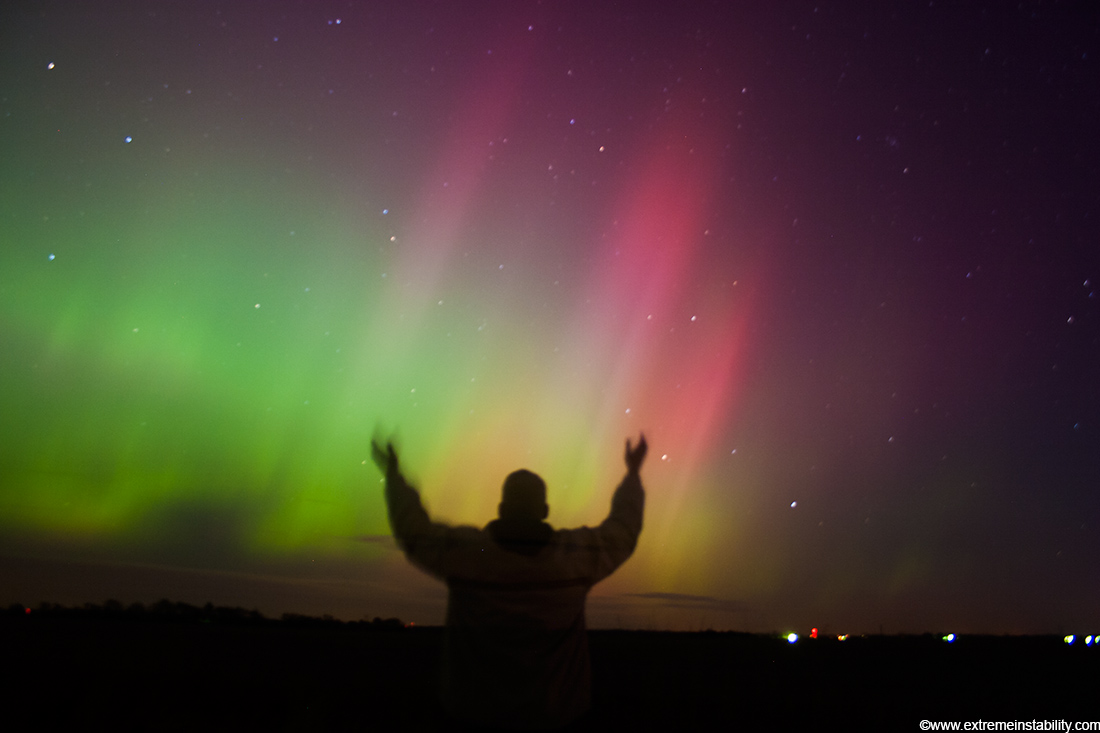 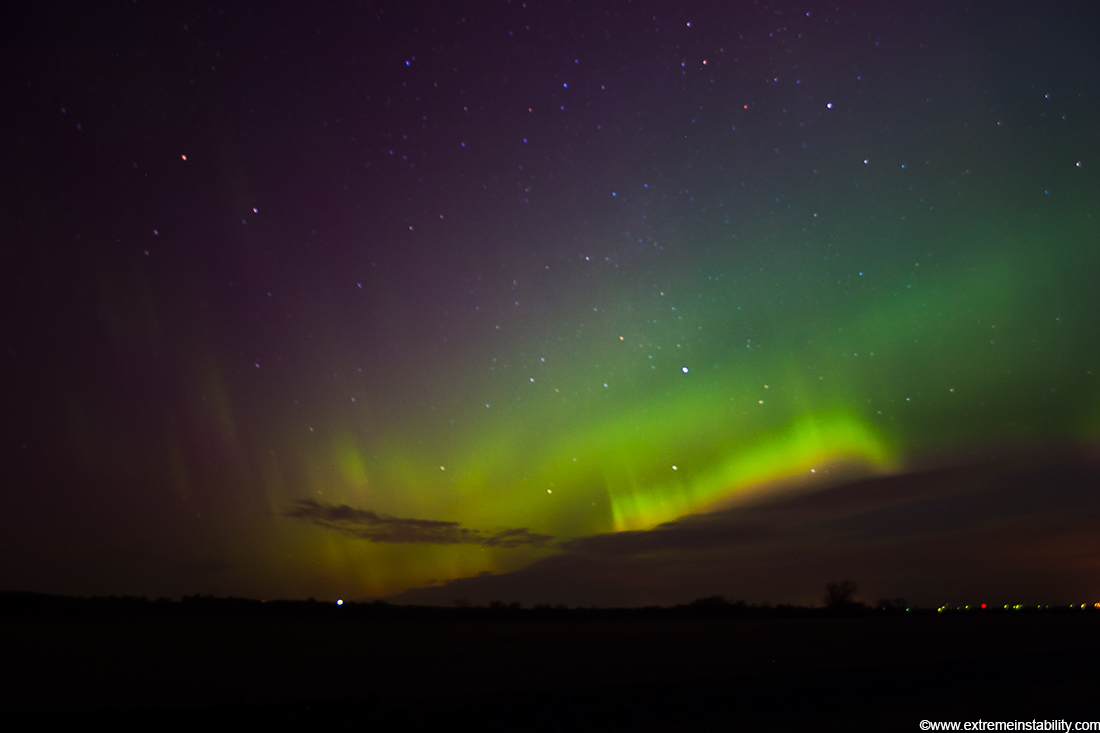 Here it comes....... The clouds moving in across the north actually made for an even cooler show/look. This happened pretty fast. I was like, ummmm what is happening now. 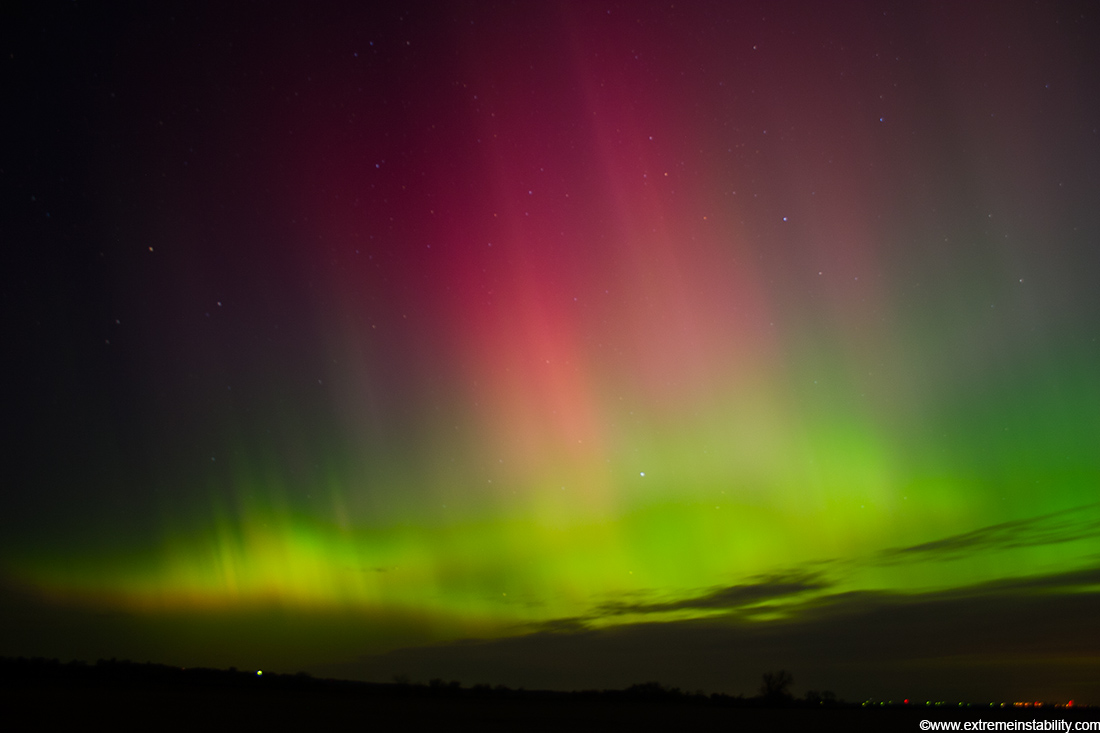 Surging south and getting stronger. 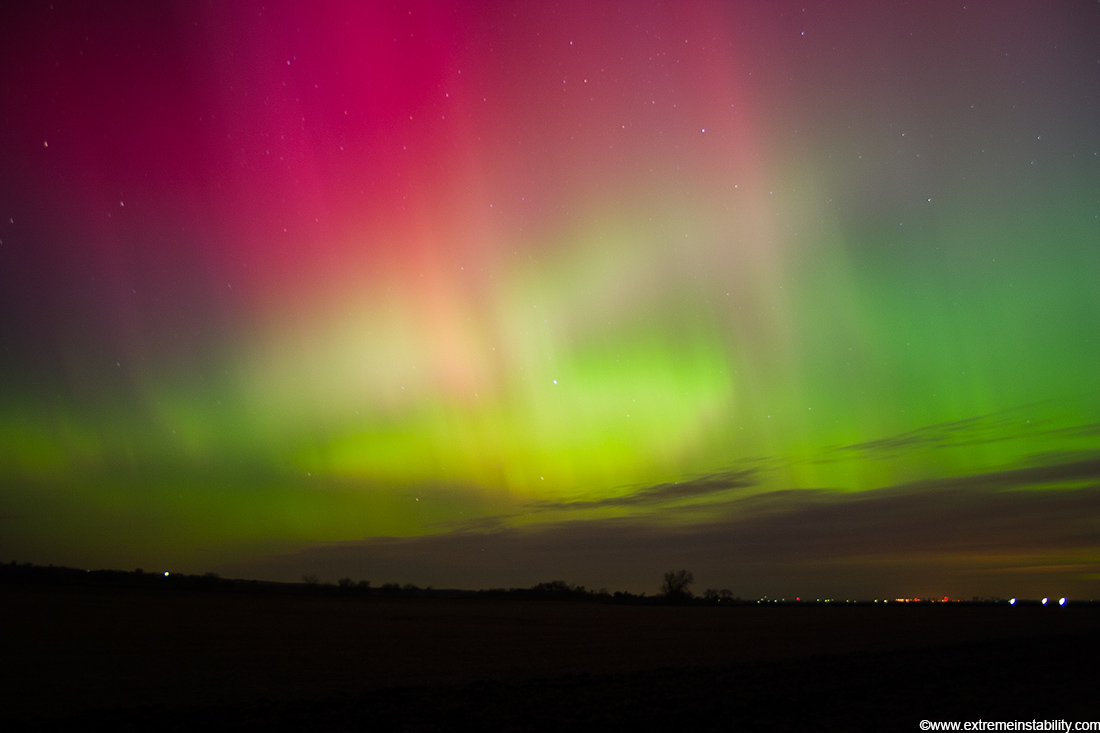 This wall was horizon to horizon and arcing south of straight up. It looked like it was going into this "hole" overhead. There was even some short ones streaming from the south into it. The reds of this wall were quite obvious and strong visiually, with the naked eye. . 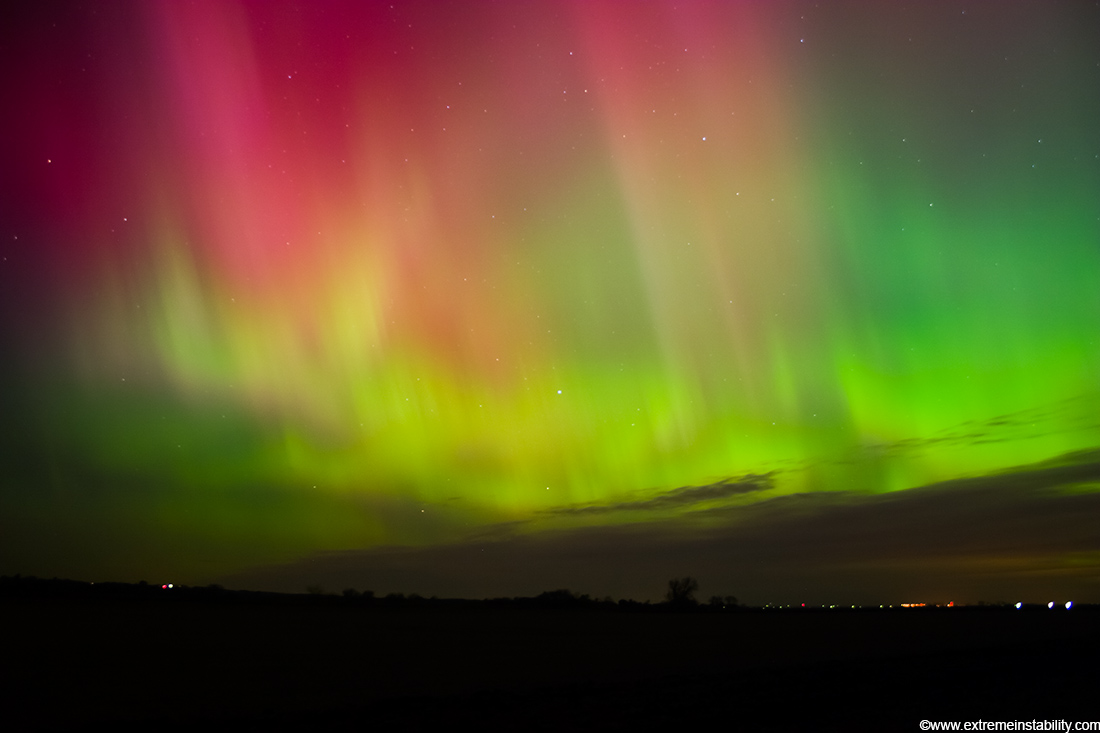 After this amazing surge it went to almost nothing-about as quickly. I put off shooting that corona hole overhead as I thought I had more time. I think it only gave me 3 minutes of this intense wall before it weakened to nearly nothing. 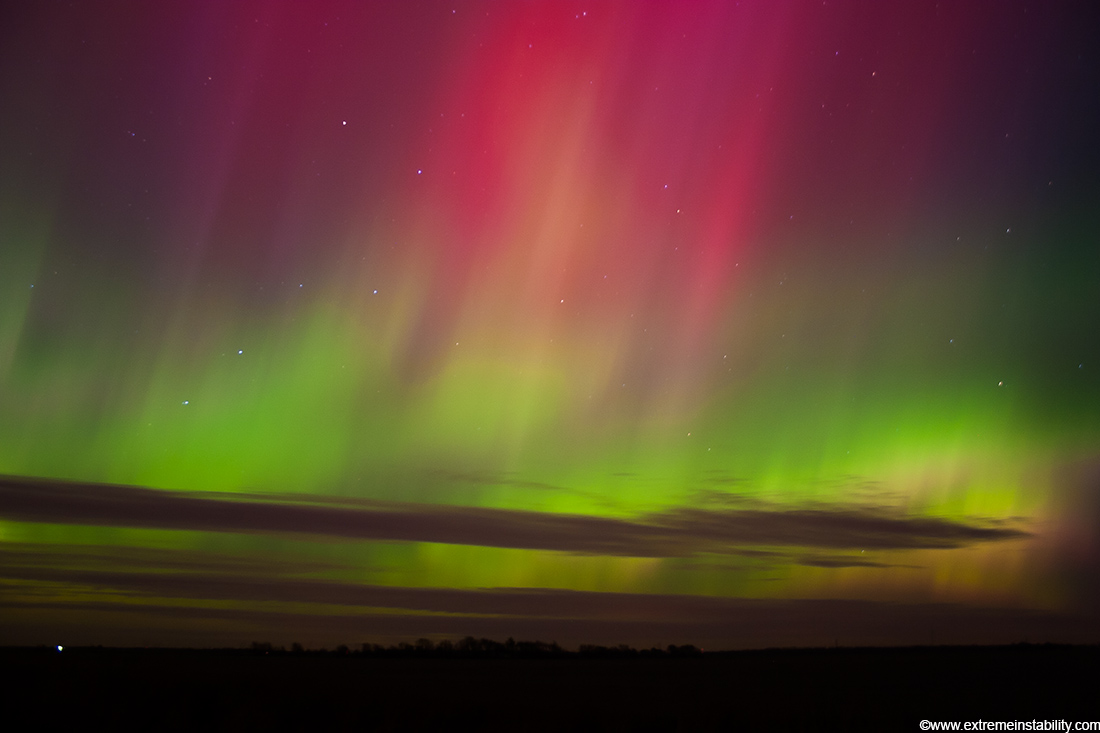 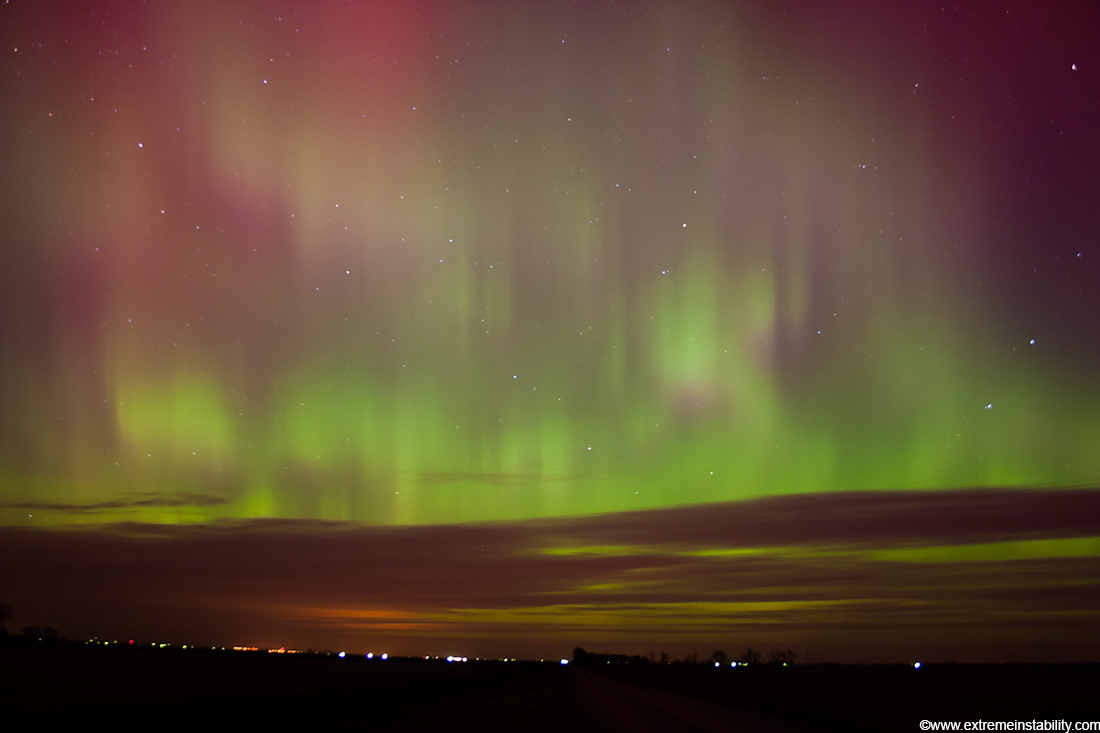