I heard about some apparently more crazy damage up towards Uehling so I went and took a look. It was crazy. There was a 2-4 mile wide zone of complete vegetation destruction. Also much more obvious high wind damage than was around Blair. Just south and then north of the Herman Scribner road towards Uehling. In that zone the winds had to be damn high. The shelter belts took a complete and thorough whacking and surely saved a lot of farmers their roofs. Just look at the smaller tree above.  Bark gone off much of it.  The ground was also rather void of green.  Any ditch that was slanted facing northwest was very much left brown.  Like someone mowed it on the lowest setting then it baked in the sun.  Perhaps the craziest part was just how narrow this region was and how fast you could drive out of it to rather little damage and lush green everywhere.  Looked like a massive tornado track looking across it, but it wasn't. A typical shelter belt in that zone.  These things aren't just dead and brown, they would have been all green earlier in that day.  Lots of debarking in there too. 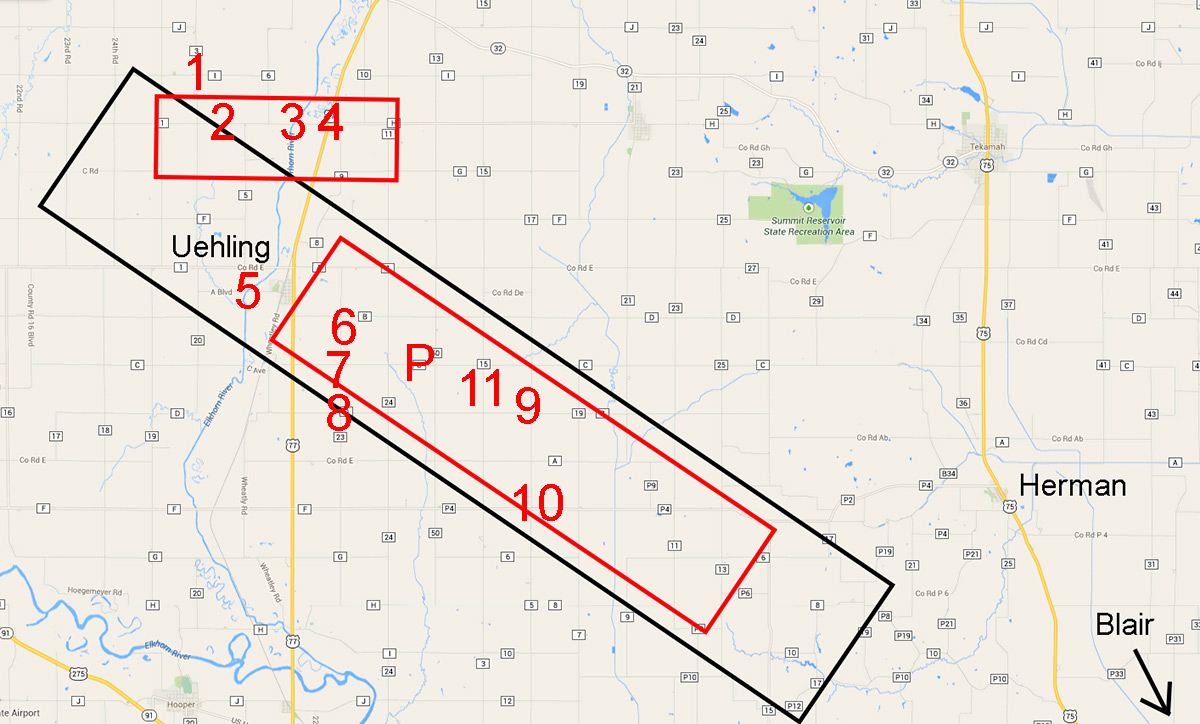 Here is my crude attempt at a damage survey.  The hail beat up everything on through Blair from up there.  But there was a zone of really high winds(red highest) and this attempts to point that out.  Click on the numbers to see some images from those locations.

Northwest of Uehling was somewhat confusing and surprising when going off the radar.  Lots of areas with just some hail damage and very little greenage damage.  The MESH product on radar was maxed at 5 inch diameter there.  Driving under where that max went didn't seem that bad.  But the area it faded some and lined up nw-se southeast of Uehling had the crazy wind damage mixed in. More on that later down below with the radar.

But notice number 1 and 2.  That church was rather fine.  I wasn't even seeing much siding damage.  Trees mostly fine except the tops lost a few leaves.  Then look at 2, only a mile away.  Trashed bad.  Same with 3.  4 was about the east edge of whatever that was through there as it rapidly improved going east of it, to green everywhere and little sign anything happened.  I also noticed leaving Uehling north there wasn't much of any sign of damage.  Trees looked good and green. It seemed some other entity had to come through that first red box area.  A whole ton of irrigation pivots were overturned in there too.  One was overturned to the west, but might have just been the angle of the hill that helped that.  This area did have hail damage also on the east side of things though...Uehling included.  Nowhere else did. Trees sure wouldn't have provided a ton of help from the storm.  Wonder what the birds, rabbits, etc did.  Felt bad for the cattle as well.  Not sure if it killed any cattle or not.  They sure have to be sore now. Should be all green.  Stream right there.  Go over the edge any and the north side there was nice and green.  The north facing stuff looked like a violent tornado went over it. North and west sides...west of Uehling.  Uehling is in the background.  The east side of this also had hail damage, half as much. This house lost its roof.  The crazy thing was they were JUST on that cut off edge.  Just north of them the smallest bit it's all green and fine and dandy.  Further south of them and you were in the core of the void.  Only for a couple miles though. Silos smashed in.  Trees well, debarked.  This farm had a lot of damage.  Outbuildings blown in.

Click this to see it bigger.  It's around 90 degrees, south to west.  Original is about 42,000 pixels wide.  Look not on the left but near the left far out there.  Trees largely fine in that area.  That was the crazy thing how you could see an and out of this damage track all the time.  In it, it was a lot thorough.  The first image on this page is of the big and little tree in the far right of this.  Looked like many of the hay bales were rolling. The siding is almost 100% removed. Again siding just about completely removed.  This was just south of the Herman Scribner road in that swath.  The wind damage really trailed off fast after that path crossed that highway. Another of the many farms in that swath heavily damaged by the strong winds.  Blair clearly never had winds anywhere near what they were in this zone.  Hardly any tree damage besides hail.  It had to be hell out there. Not as lucky as the other church.  It was on the southern edge of the nasty wind swath at least.  Trees a lot better here than points north. The following radar stuff is from GR2 Analyst, which is damn amazing now that I have played with it some.

I wanted to find something on radar that indicated there would be such a wind swath.  Velocity sure wasn't saying much to me.  Just a lot of 59 knot values.  That doesn't do what happened, not even close.  This area is rather darn close to the radar.  So the radar is seeing rather low.  Its base scan is around 1800 feet there.  What I think happened was just a ton of downdraft with a truly nasty hail bomb and a good chunk of the lateral wind at the ground being under 1800 feet.  Because what did happen on radar there was a truly nasty hail core.

First off, check out the above image.  It is echo tops of the storm.  The southwest area was a longer-lived 50,000+ foot tops above the area that got the hook.  It apparently collapsed into this hole here.  I wondered if it was to do with closeness to radar, but no there's that whole area of 40,000 around it. This thing had to plummet into a deep hole right there. 55,000 to 25,000 fast.  At the same time the hail plume from hell went up just northwest of Uehling.  Wasn't much for tops going on there till right then, right after the collapse of the other.  The radar was maxing out at 81.5 dbz with that new one.  With a very high region of 70+ dbz, seen below.

Right before Uehling, with that big new updraft plume there, you got a fire hydrant of over 70dbz extending up and above 30,000 feet.  This wall then fell in that nasty wind and hail stripe on the map I made.  The line is a vertical swipe through that area of the storm at that time.  The rest, the flat area, is regular radar at the ground at that time.  The lowest scan.  Radars swing around several times each "image" and scan higher and higher.  It's roughly 5 minutes to go through them all.  So when you see radar you are usually just seeing that one base scan, which again is about every 5 minutes.  With software and the data you can see the elevation scans between those.  This combines those showing you a vertical representation.  At least where I drew the line through the storm here.  You don't get high reflectivity of 70 dbz that often and its even less often you'll ever get that much of it that damn high.

Here is a really cool 3D visualization of this.  The only parts showing in 3D are isolated to 70dbz or higher.  Watch for the black blob to show up in the middle.  I had it removing everything below that value.  This really shows that super nasty bomb of hail and subsequent winds at the surface.  Some of that wind spread out west on the west end of it, given Uehling actually having some of their damage on the east sides, unlike areas further east.  So imagine truly crazy hail core clear up to 30,000 feet, crashing on down as the storm moves forward.  Lots of downward motion in that for sure, all racing out at ground level, probably much of it below the 1800 feet the base of the radar scan was there.

Straight on look so you can see the height of 70+ dbz.

Back to Page 1 Blair House and Car Hail Damage 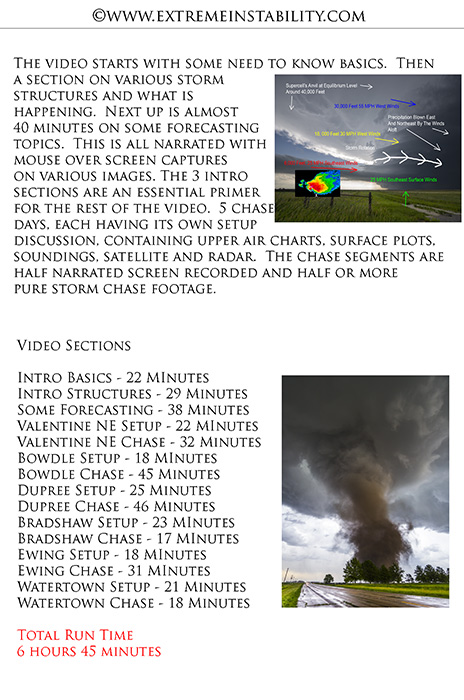 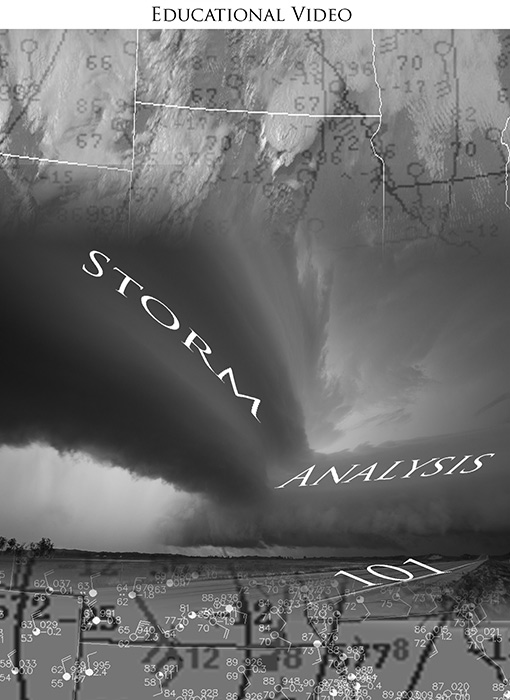 Learn more about storm structure and behavior with this nearly 7 hour video, including a digital download option. Wild storms.