*Sigma 50mm Art Added At The End Only*

Not a ton of reviewing on these here. Mostly sharpness shot on a full frame 5D II in the upper right corner area. With a mention on coma. Also, the Canon 50mm F1.8 has a flimsy focus ring not overly meant to be used manually. I always use live view 10x zoom and manual focus things to infinity for what I shoot. Bump that Canon 1.8 at all or breathe on it wrong and the focus will be off again. This issue got me to sell mine and first upgrade to the Canon F1.4, which at the time was $350 compared to Sigma 50 at the time being $500. I soon swapped it(spent $150 more) for the Sigma, because wide open at F1.4 it was horribly soft.

The lens names are in the file names upper left of each grab(top Sigma, middle Canon 1.8, bottom Canon 1.4). This first example all 3 lenses were shot at F1.8. And yes, clearly the Canon 50 F1.4 was framed a hair wider at the time. It really doesn't change the outcome, obviously. The crops are from the very top and to the right of center. 100% cropped with zero sharpening applied to the RAW file. More wide open the Sigma owns the two Canons. Just look at the white shadows off the PVC. The Canon F1.4 is scary bad here, even if it's contrast more than anything. Not even fully open either. Even the cheaper Canon F1.8 beats it.

Stopped down to just F2.8 and the Canon F1.4 has floored it into first. I suspect the bit of contrast difference/weakness on the Sigma is a lot to do with the day it was shot and some cirrus dinking around the sun, not much but maybe enough. On the gif comparison with the F1.8 canon below you can see the contrast is much the same. 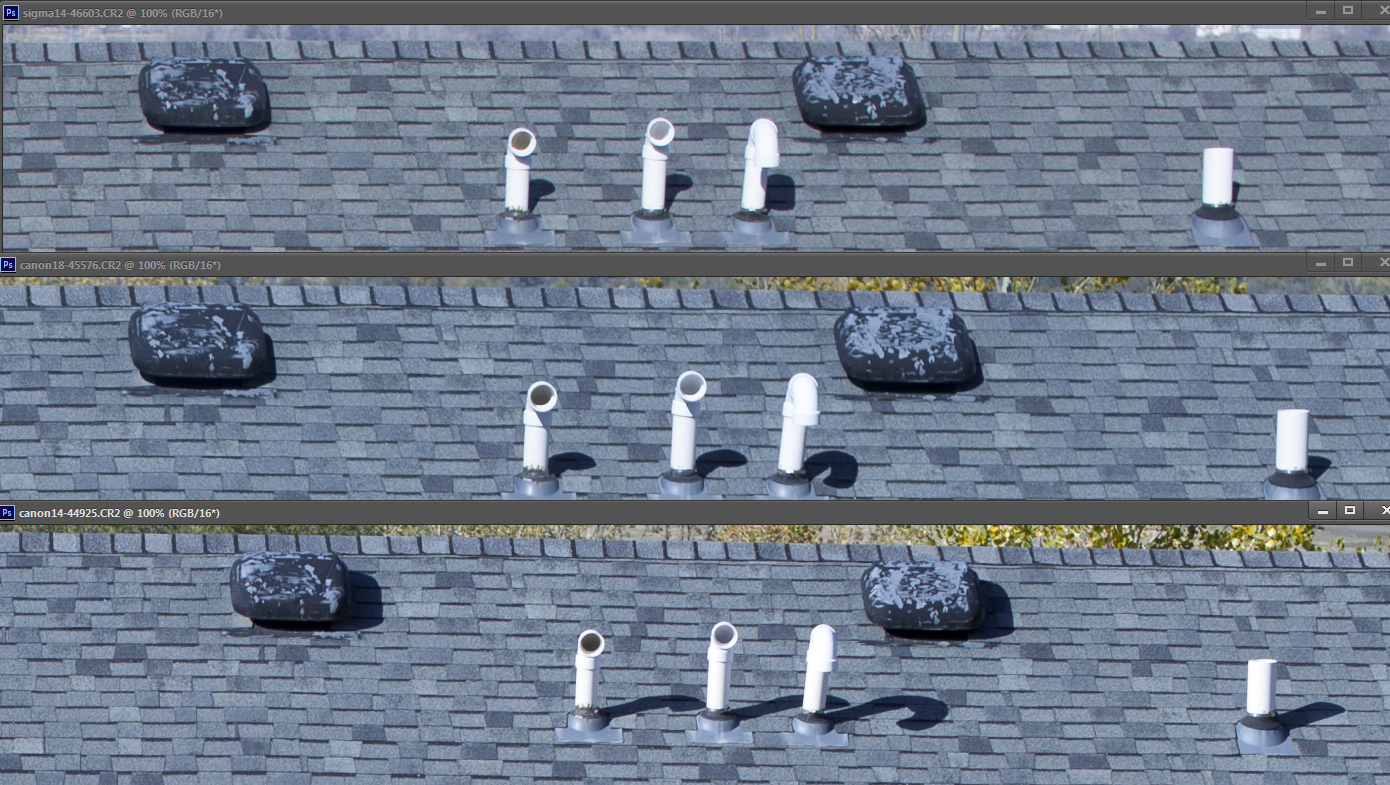 All three shot at F5.6(click for full size)

At F5.6 the Canon F1.4 still handily winning. They are all pretty good by here. Through the range the cheapest Canon F1.8 is always in range of either leaders. If only it didn't have the useless cheap flimsy focus ring. I'd just keep that if it had a real ring.

So clearly if you plan to use the lens wide open a lot, get the Sigma. But even by F2.8 the Canon goes right on by the Sigma. I shoot a lot of night stuff and can usually use that extra speed so I don't feel too bad keeping the Sigma. It is interesting just how bad the Canon is wide open though. All in the design and what they want to hit I'm sure.

This may or may not be interesting for some. Both images were taken from a tripod in one spot with the same manual settings for exposure and same white balance in RAW conversion. The Sigma's 50mm view is a fair bit wider than the Canon 50 F1.8. And there's some color differences. Mostly just thought the width difference was interesting. 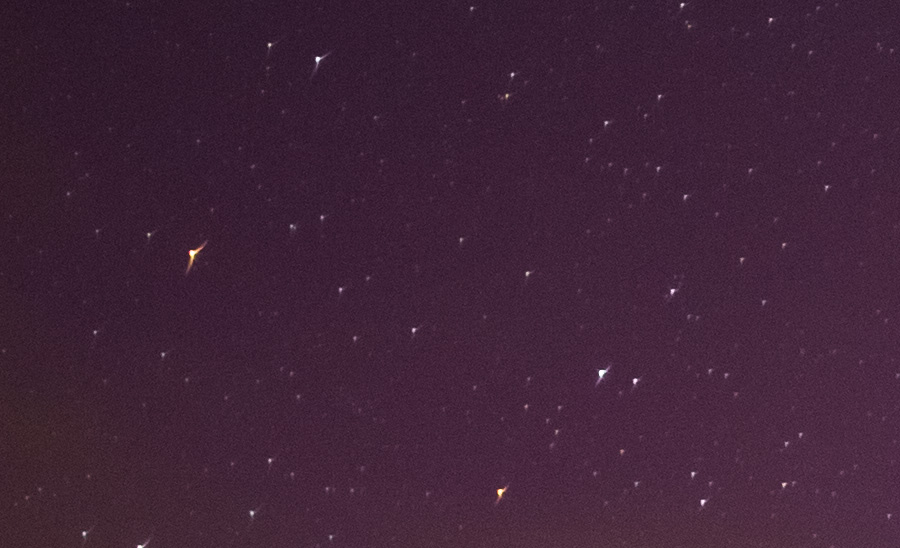 What all 3 of them suck at is coma wide open(it's the worst on full frame corners just like sharpness is). Where points of lights have wings on them. This is a full sized crop of stars from a full frame camera. They all look as bad as one another basically. I haven't discovered the 50mm which is good with this. Probably a Zeiss. Samyang needs to make one since they correct for coma usually.

The Sigma 50 Art F1.4 will just blow away the other 3 in sharpness. I rented it to see if it did any good with coma. Again, the other 3 are basically equally as bad to one another with coma when used wide open. The Samyang(Bower/Rokinon) 14 and 24 both put Canon to shame with correcting coma. At far far lower prices. I had hoped the highly praised Sigma 50 Art F1.4 would as well. Because there's just nothing in that arena that does. It handily beats them all. Yet it's still more of an issue than those wider Samyangs. I was sort of let down but I probably shouldn't have been. It is afterall far better than the other three on here. And otherwise is mind numbingly sharp. Here are some far upper left corner examples at F1.4, F2 and F2.8 compared to the regular Sigma 50 F1.4. Wouldn't overly matter comparing to the two Canon 50s as they are much the same, bad with coma.

Ignore any contrast/darkness differences as that is simply the area of the sky they were pointed at. For the most part. Also, click any for full res.</> 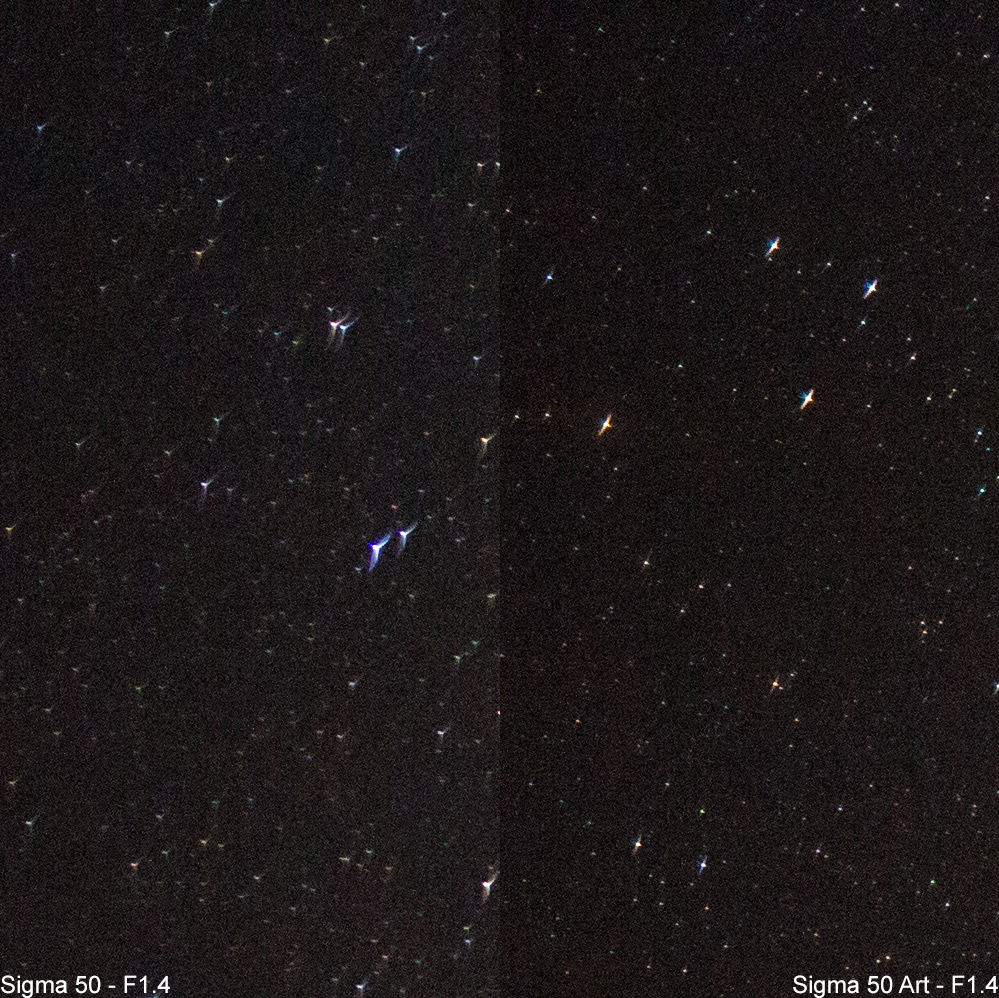 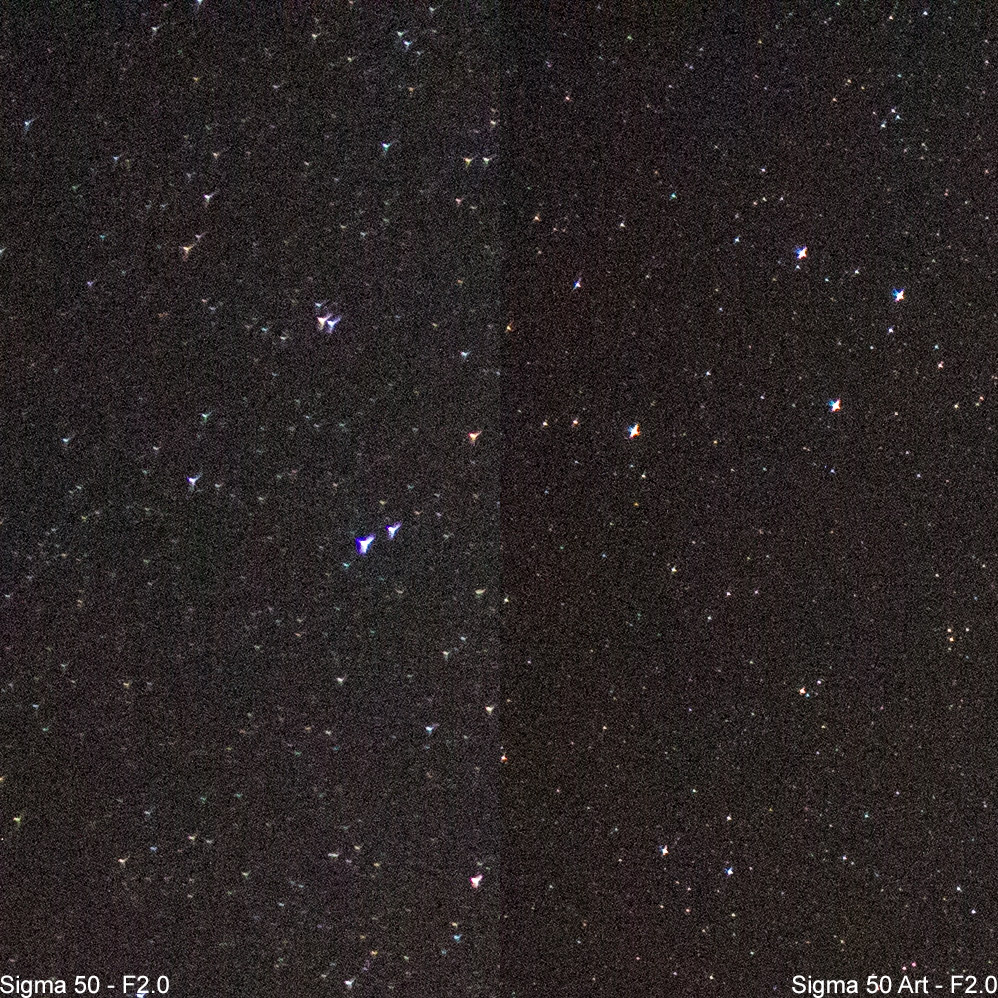 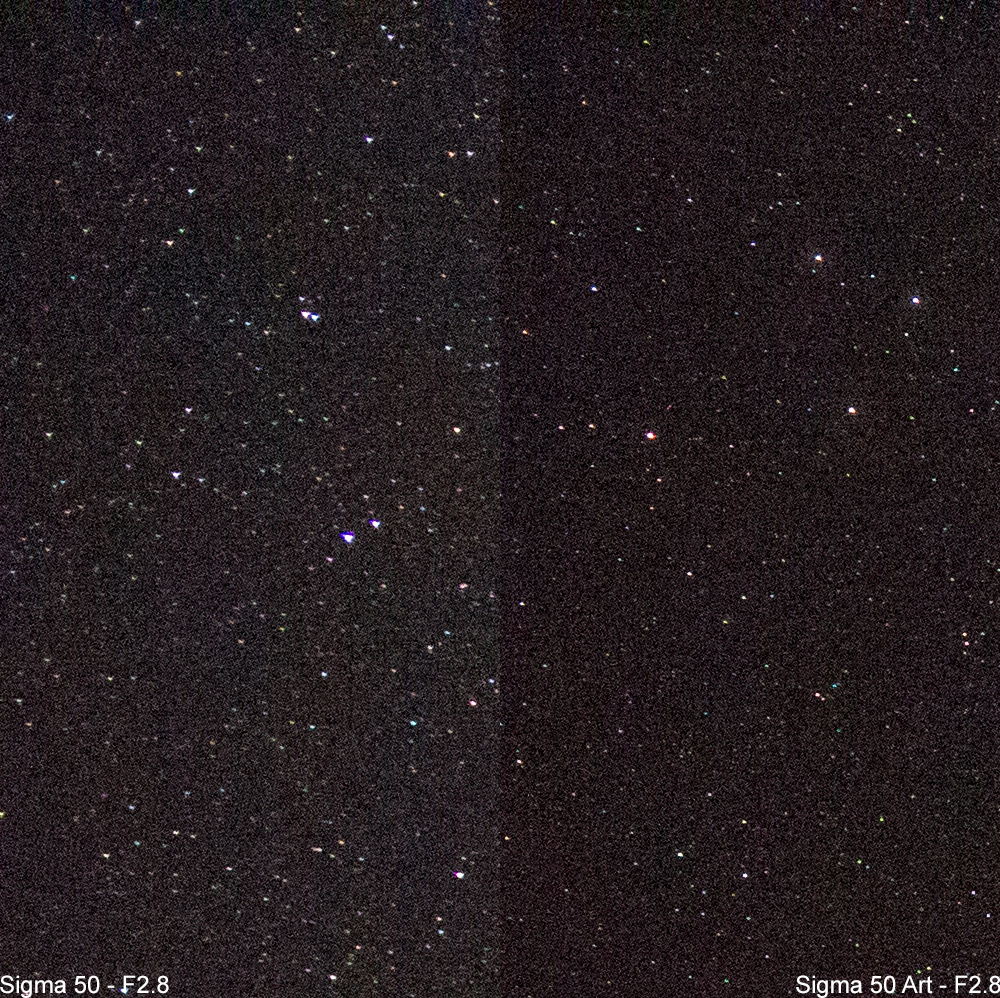 If you can swing the Sigma 50 Art F1.4 do so. It's enough better than the others to be worth it. I never use autofocus though and only had it long enough to throw at a stary night sky. As that's a pretty big issue with fast 50mm glass. The idea to have one fast is to use it fast, at least when the need is there. If you have city lights or stars in the frame, especially full frame, the coma when open beyond F2.8 is simply a problem otherwise. The Sigma 50 Art is at least a whole lot better than the others. It's been compared very evenly with a $4000 manual Zeiss 50mm. That sharp.

Samyang recently released a 50mm themselves too. It doesn't deal with coma quite like their wider angle lenses. This Sigma 50 Art apparently edges it out. As far as I know, it's the best at it in the 50 focal range.