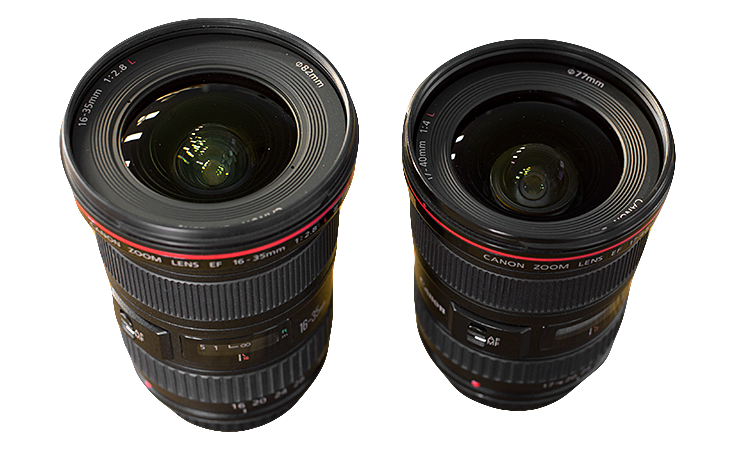 These two I only tested the wide end. They were both rented from lensrentals.com, who check the gear before it is rented out.  I owned a 17-40L in the past.  The F2.8 16-35 is a little heavier than the 17-40 obviously.  Bit taller too.  Large 82mm filter thread too if you use those.  I never use any filters.

Both shot wide ends at F5.6, same ISO and shutter settings, so same settings.  The white balance was set the same in RAW conversion.  As far as color and image is concerned, 17-40 looks to be a bit cooler or 16-35 bit warmer.  17-40 could be eeking out some better contrast, or that could just be the slight cooler temperature to the shot. The roof looks warmer on the 16-35.  Just changing the white balance can really change the contrast appearance and overall look.

Both have some distortion at their wide ends, which isn't a surprise given how wide they are.  The amount looks quite similar to me.  With the profile fixes for this it really isn't going to be an issue. 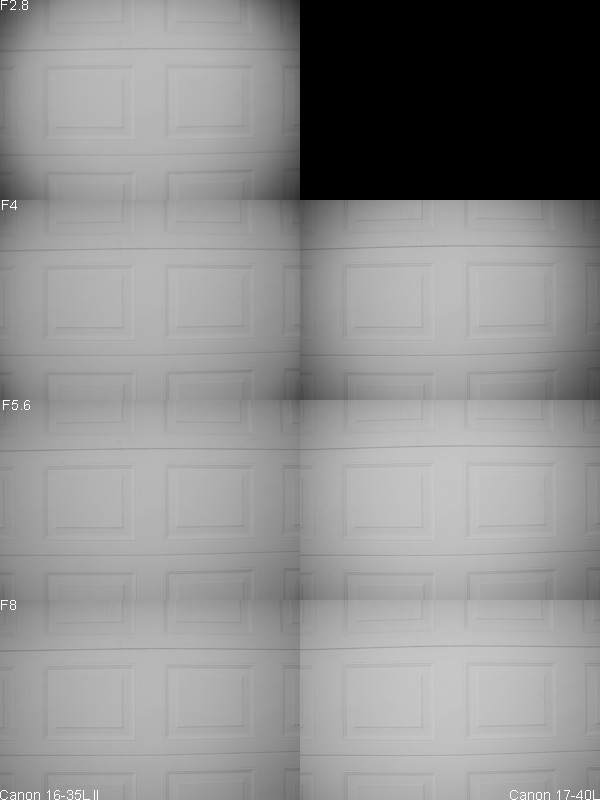 It's probably not a stretch to say the vignetting at F4 on the 17-40 is similar to the 16-35 at F2.8.  Big vignetting doesn't come off as much of an issue at night.  Just going to be daytime higher dynamic scenes.  Canon currently doesn't have the best shadow noise recovery(noise/banding) so it's worth paying attention to exposing to the right as much as possible if you have much vignetting.  Though it is considerably better on the 6D than say the 5D II. 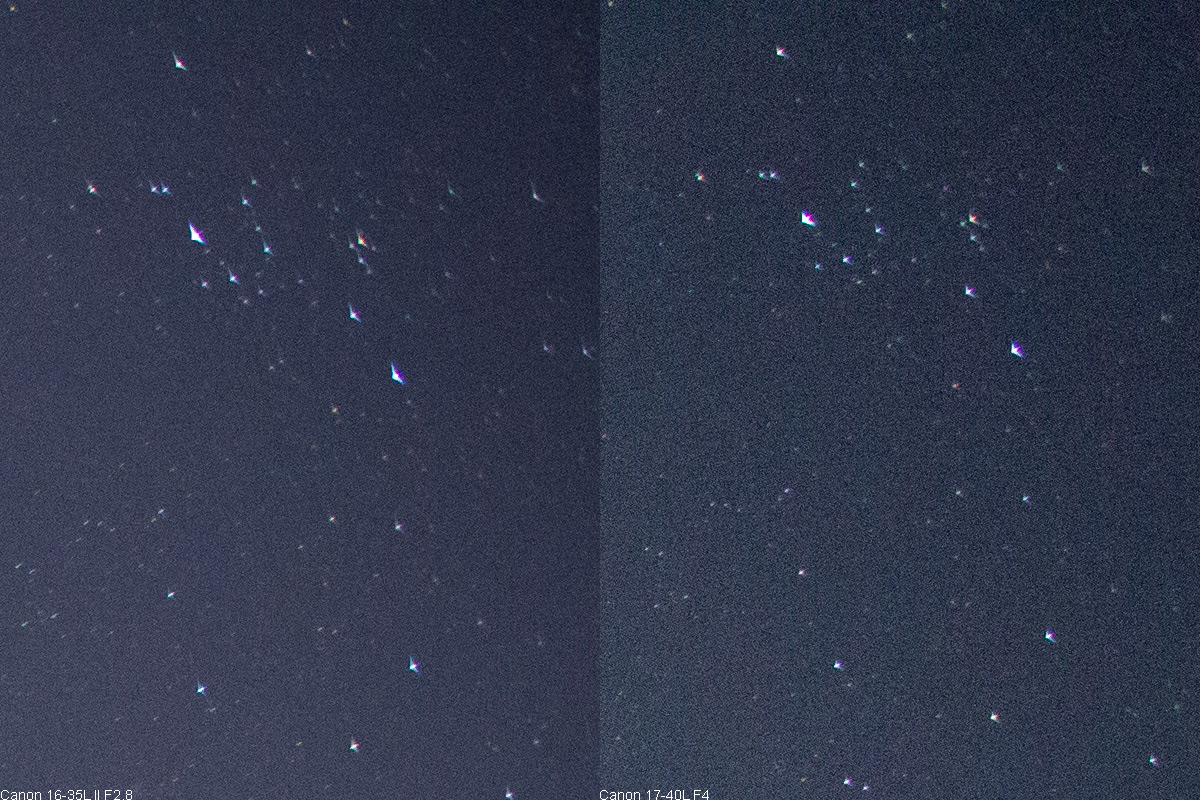 Both lenses have ugly coma towards the corners.  Sad the 17-40 is doing it even at F4.  More on corners below. 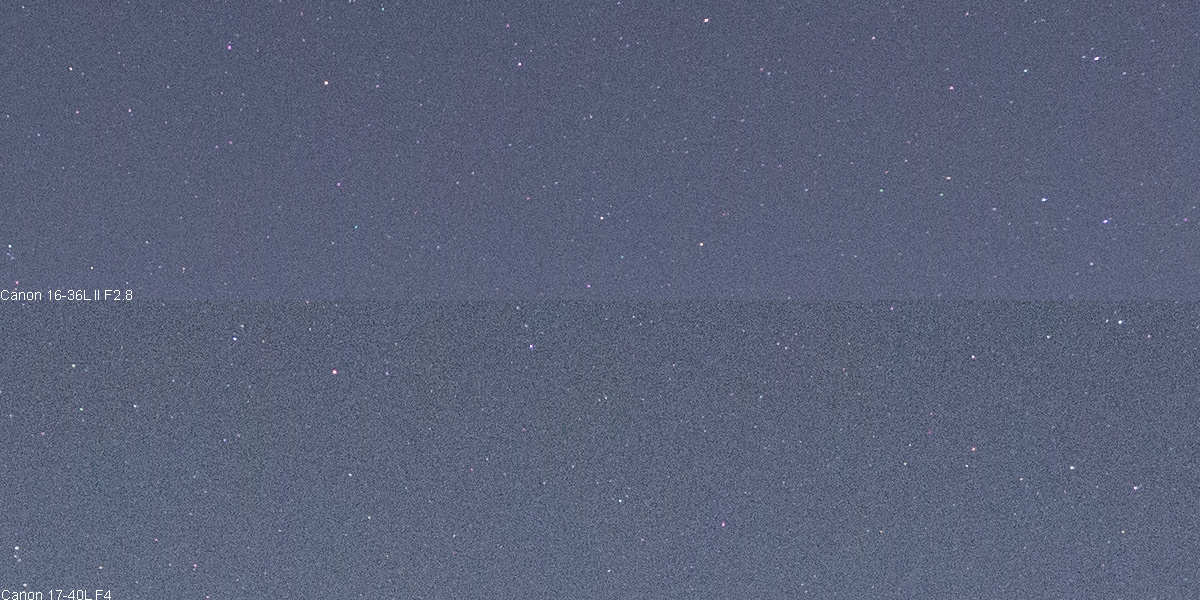 Both lenses are plenty sharp in the middle wide open.  Really no issues there.  The 17-40 is probably sharper in the middle.  But yeah it is at F4 here and the other at F2.8. 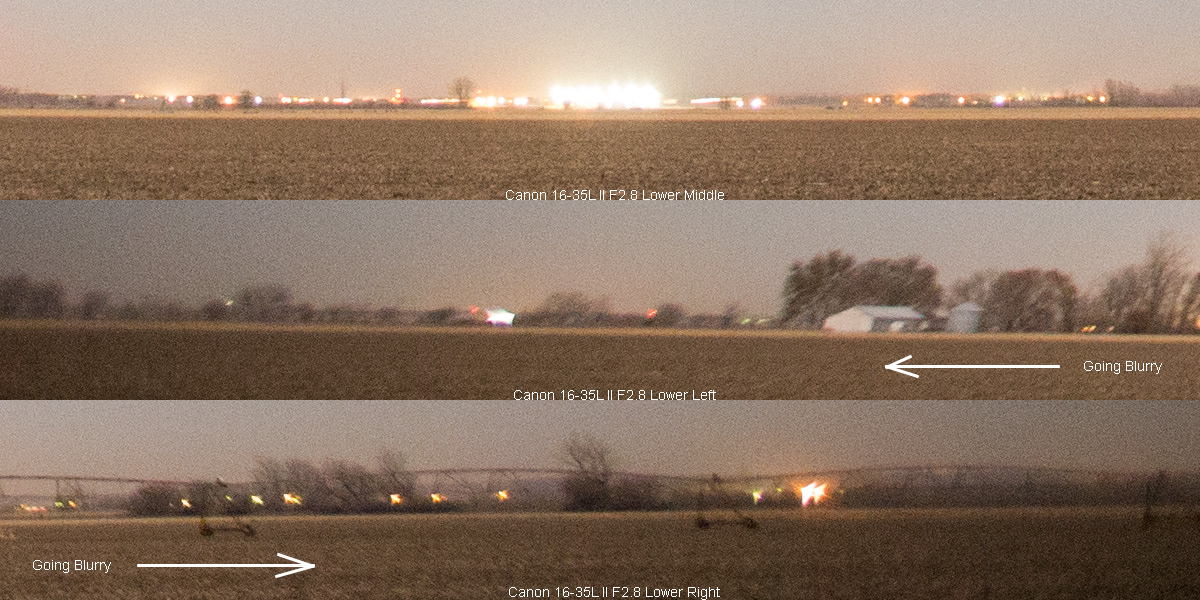 The corners of the 16-35L II were rather bad.  With this lens it seems to start early in the frame too.  I'm sure it sharpens right up stopping down, but that's besides the point as what's the point in having F2.8 if it isn't that great.  You can see above the corners gradually go bad and at this cropping are already not good on the good side.  And by the edge it's junk.  Coma on the lights too. 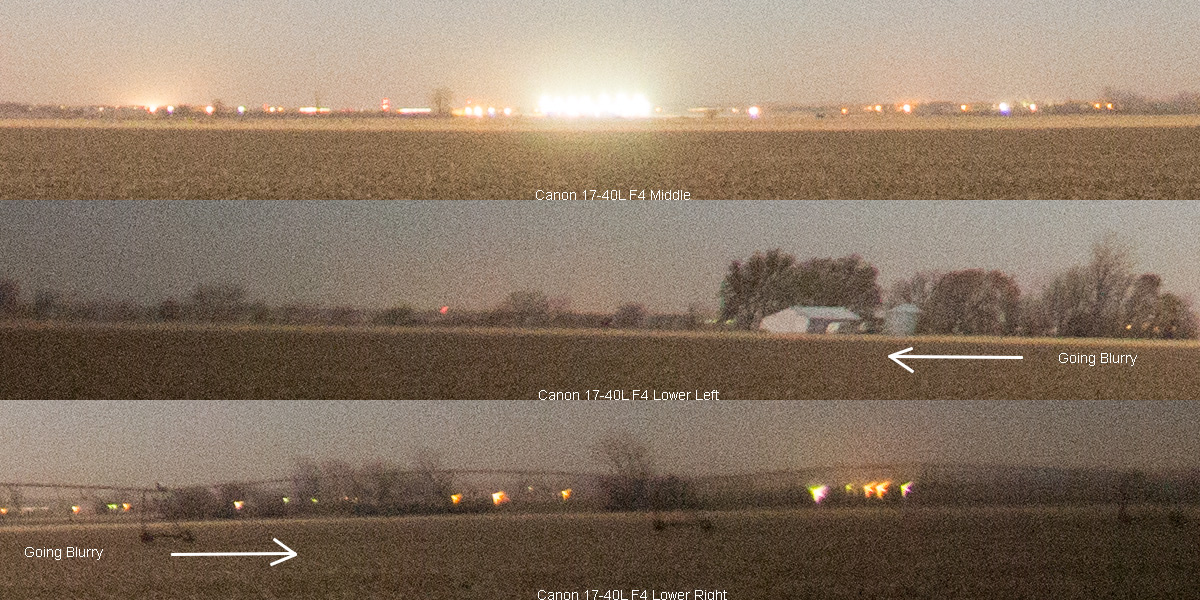 What the 17-40L seems to do is be decent further out towards the corners then just rapidly drop off into mush.  But compared to 16-35 it is starting at F4 obviously.  It would make sense if the 16-35L behaves similar at F4.  I wouldn't call either good wide open.  But this is the price one pays for having a zoom range.  Least these Canon zooms.  I don't have any zooms now till you get to 100-400mm.  Primes are just so much better across the frame. 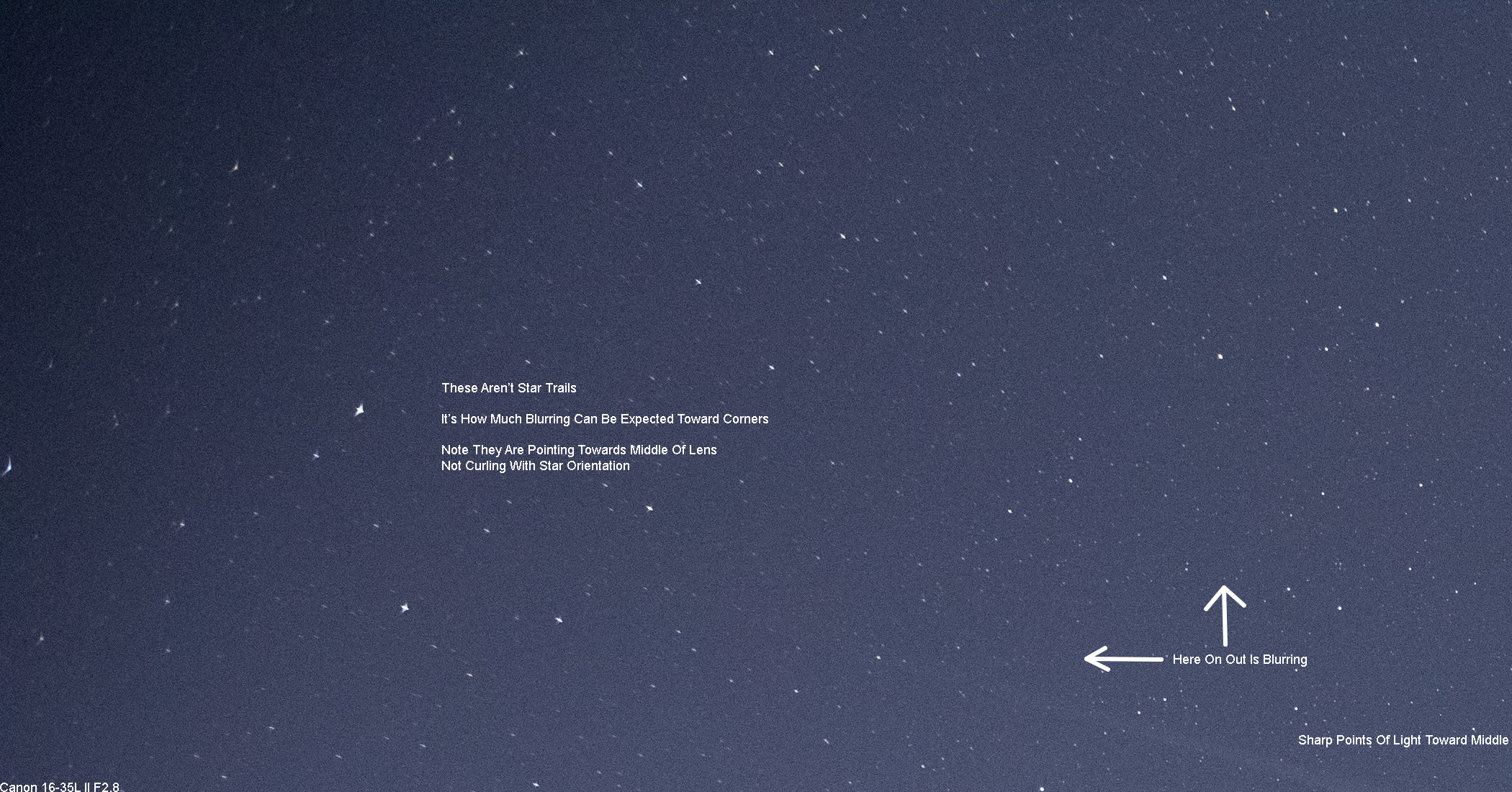 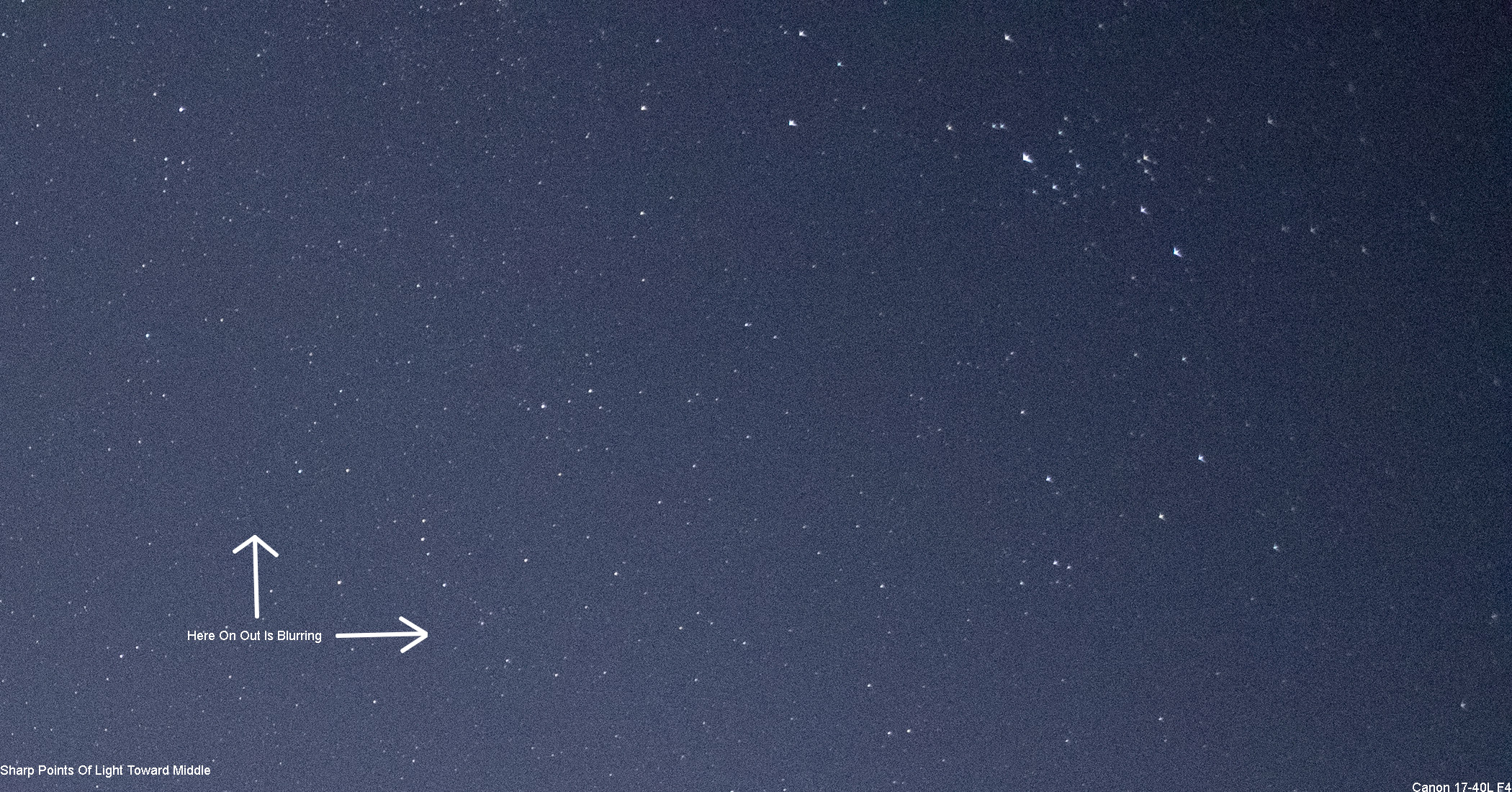 These two images above can show you exactly what to expect with corners.  Click on either for the full size image.  The 16-35L II is the upper left corner at 100% and the 17-40L is the upper right at 100%.  They don't quite reach the middle of the frame.  I had to pick the other side with the 17-40 to get to the sharp middle points as the other wasn't making it.  Basically they both show you how the lens was focused at infinity and sharp and the only thing possibly to blame for the corners being like that is the lens.  That going soft trait is going to happen no matter what you are pointed at.  These points of light just show it well in a quantitative sense.  They aren't trailing in 6 seconds shots.  And if they were then the sharp middle ones would be moving as well.  And they wouldn't be pointing to the middle of the lens like they are.  The less you see of the lights and the longer their streaks are in the corner is blurring. 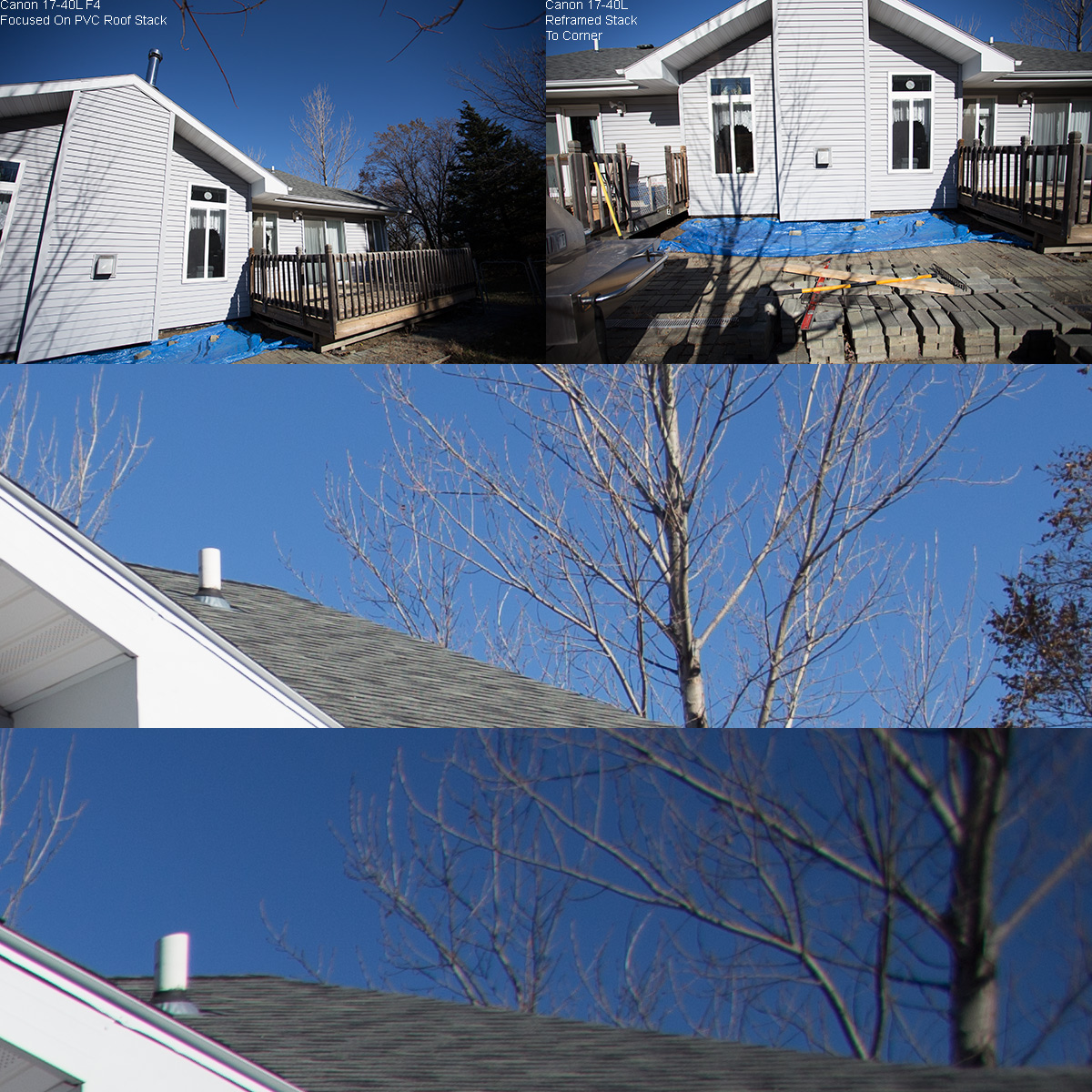 Here is another way to show corner fall off issues.  With the 17-40L I live view 10x center frame focused on that pvc stack.  It's at infinity by a ways.  I snapped a shot like that and one reframed with that in the corner.  The two crops are the difference in sharpness from middle to corner.  At F4.  The truly sad thing is, if the 17-40L had a good and bad side, the other side was its bad side. 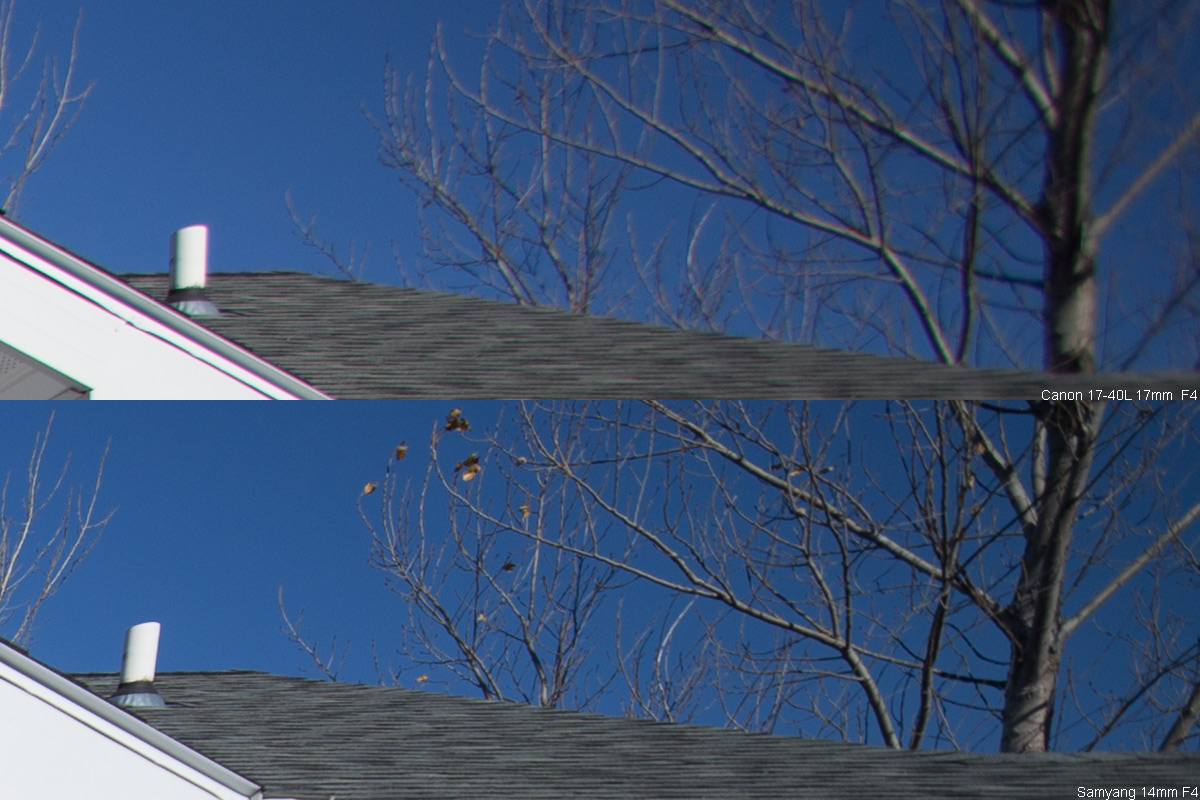 Here is another way to put this.  17-40L at F4 corner compared to Samyang 14 at F4.  It's worth going prime.  It's at least the same story with the 16-35L II.  I wish I had taken it out and done the same exact thing.  You can tell by the stars examples though, that it is the same or worse.