So the sun finally put out a nice Earth-directed flare.  Of course impacting on the longest day of the year and doing so at 1pm.  The hit was hard, but at least the Bz component was staying north most of the day...not missing much.  Usually on displays that happen this far south you'll get it to finally hold negative or south at some level.  Couple times early it acted like it was going to start that hold but then went back north.  Finally an hour or so before sunset she went and held south.  -25 roughly, which is really good.

I head out after sunset expecting completely clear skies.  What I saw to the north instead was absurd amounts of smoke.  Most likely originating in Alaska or western Canada.  Every year now it seems there are huge fires up there.  Big upper level lows move through and south into the US and drag some smoke behind them.  It was the thickest I think I've seen here.  While the sun is up it will appear clear.  Soon as the lighting lowers it begins to reveal itself.  Seen it before and right away thought, oh great smoke. Made for a nice sunset though, this looking west through north.  It wasn't what I wanted to see looking for auroras though.

As twilight got darker you could see there were already auroras ongoing this far south.  It wasn't very surprising going off the solar wind plots. 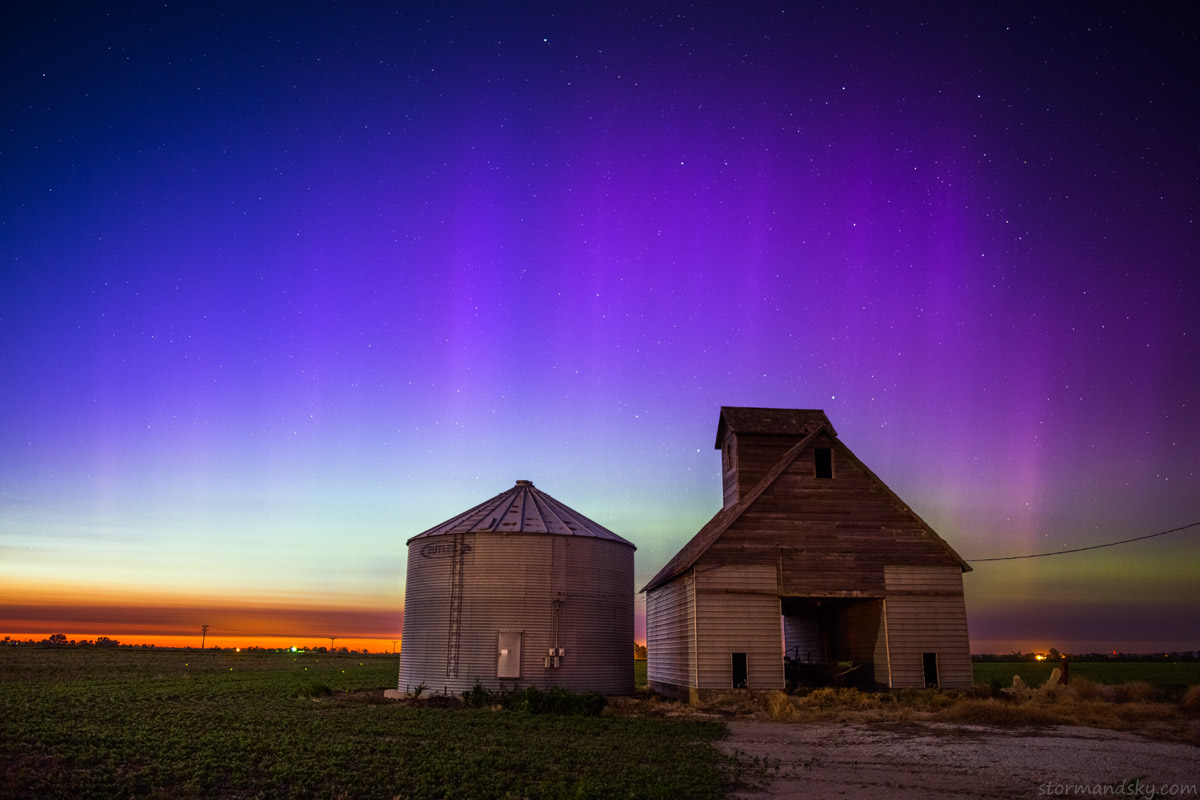 It's a cool thing when you can go from sunset colors into dark night sky, but have a spread of colors from the auroras in-between. 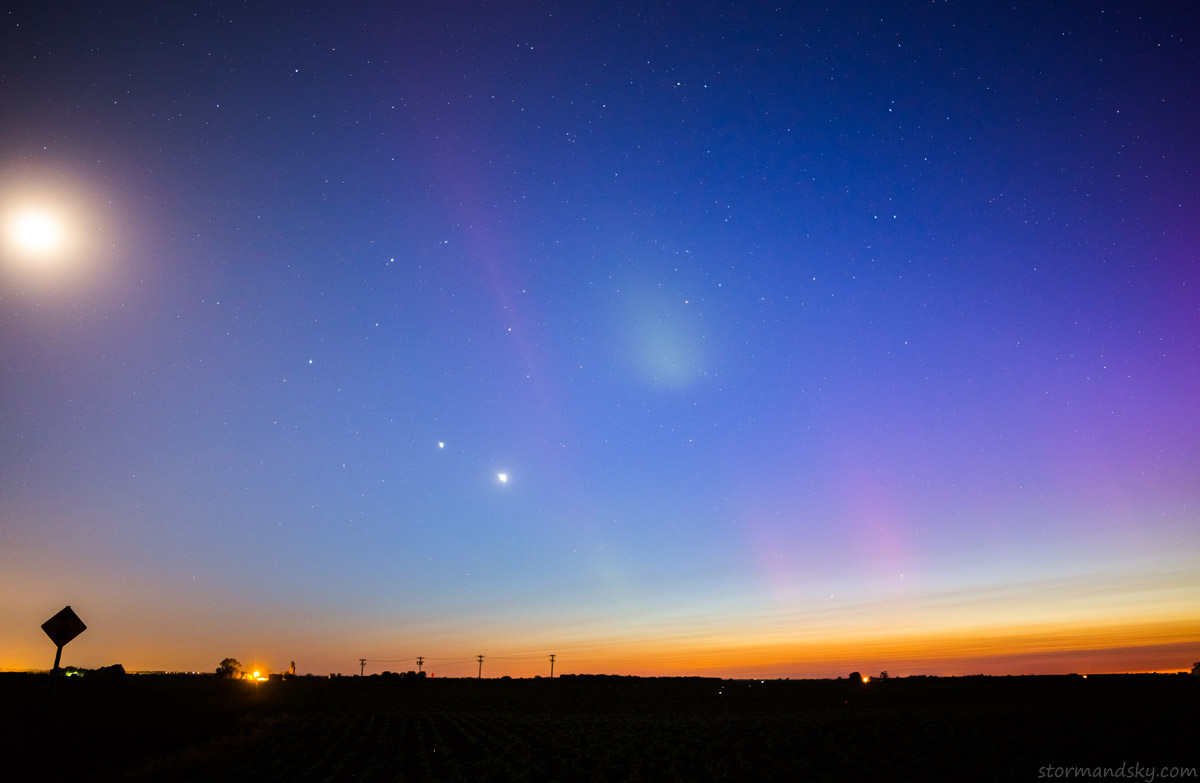 Toss in the moon too.  Plus there was a Venus and Jupiter conjunction going on. 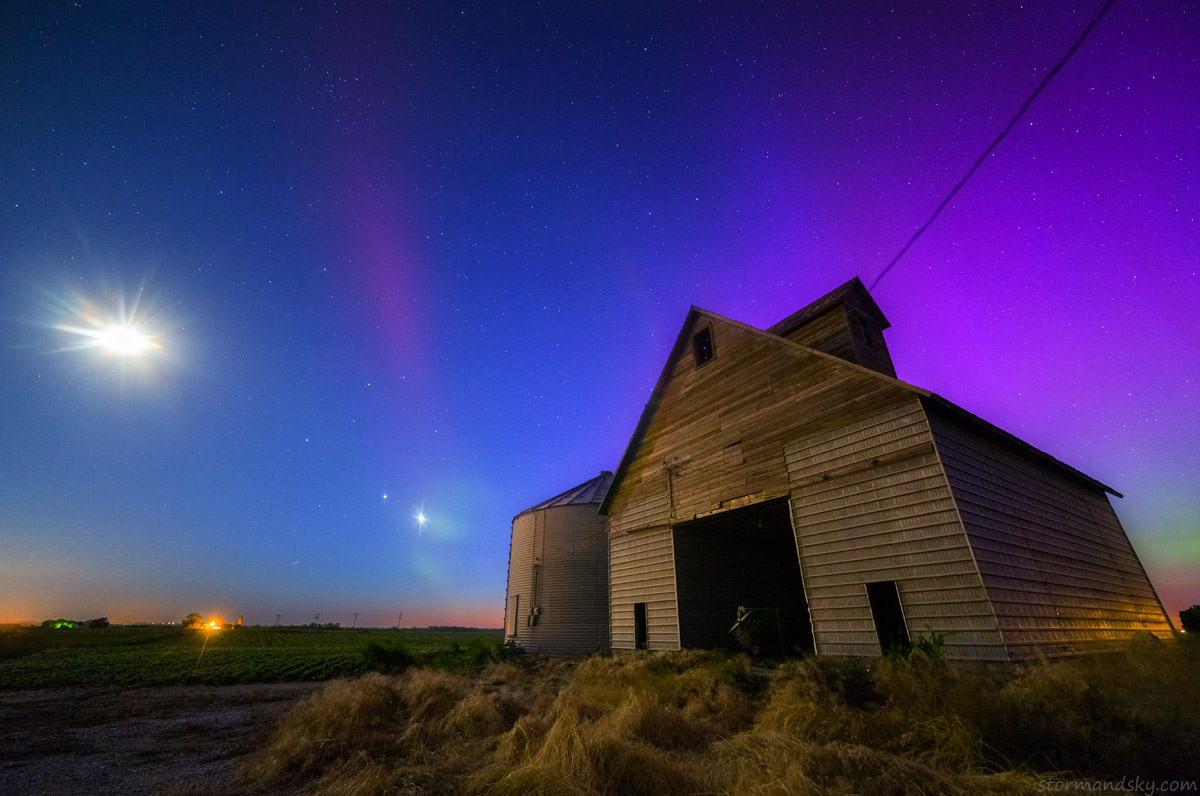 I keep going to this barn because I want to shoot overhead crazy auroras here.  It was close.  They were stretching south of due west here.  They were just never crazy that far south.  It was only the 3rd time I've seen them into the southern sky.  I really need to replace my scratched 14mm at some point.  It is fine until there are light sources which end up streaky. 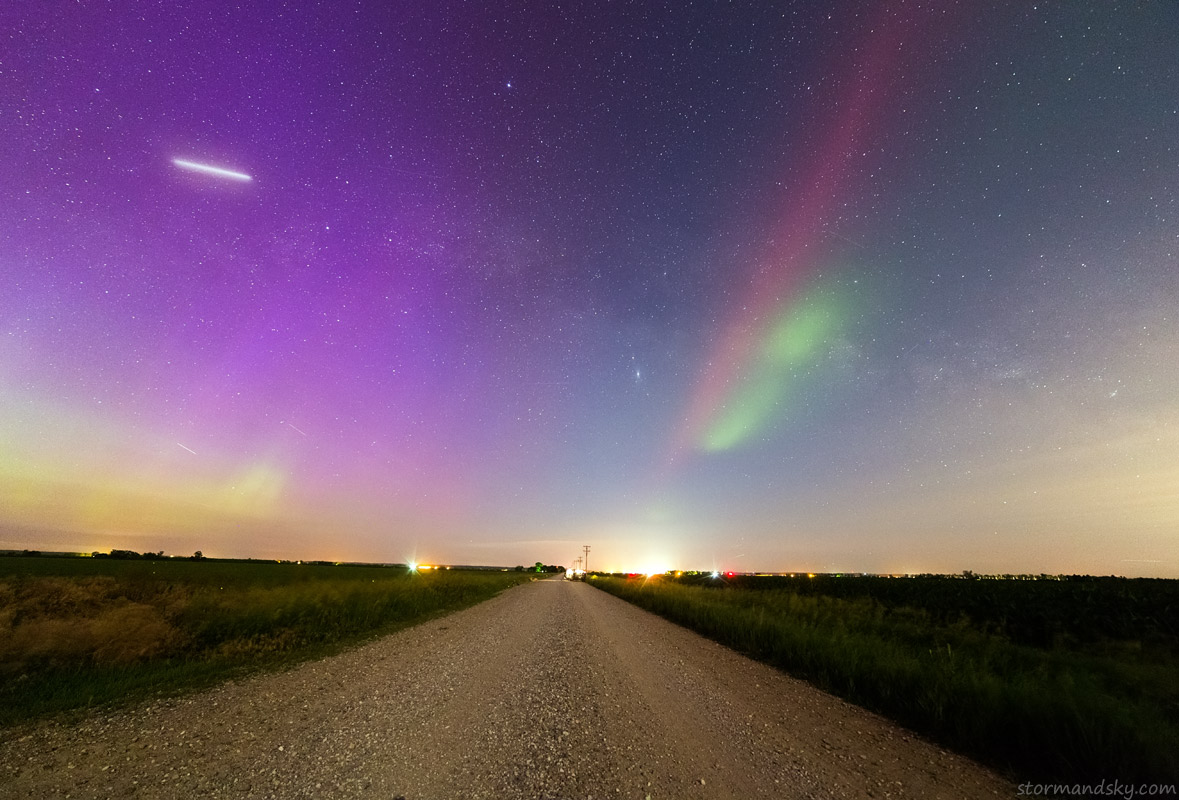 This is looking due west.  Again auroras in the southern sky here.  From 41 degrees north.  All the sudden you see this bright white but diffuse light tracking north, fast.  It was clearly satellite level but why did it look like it looked.  Turns out a rocket launched a Sentinel 2 satellite into space.  This may have been a final burn or dumping of gas.  Sounds like it was gas.  It was bizarre at the time.  You see tons of satellites or the international space station tracking across the sky at night.  But they don't look like this did.  At first we thought maybe it was because it was shining through auroras or the smoke even.  Anyway, sounds gas related.

4 frame gif of it tracking north.  I was trying to swap out lenses super fast to see if I could get it on video.  In the process I drop the one onto the gravel and scratch its back element.  Sigh.  It would later also fly out of my shirt pocket.  I never drop gear. 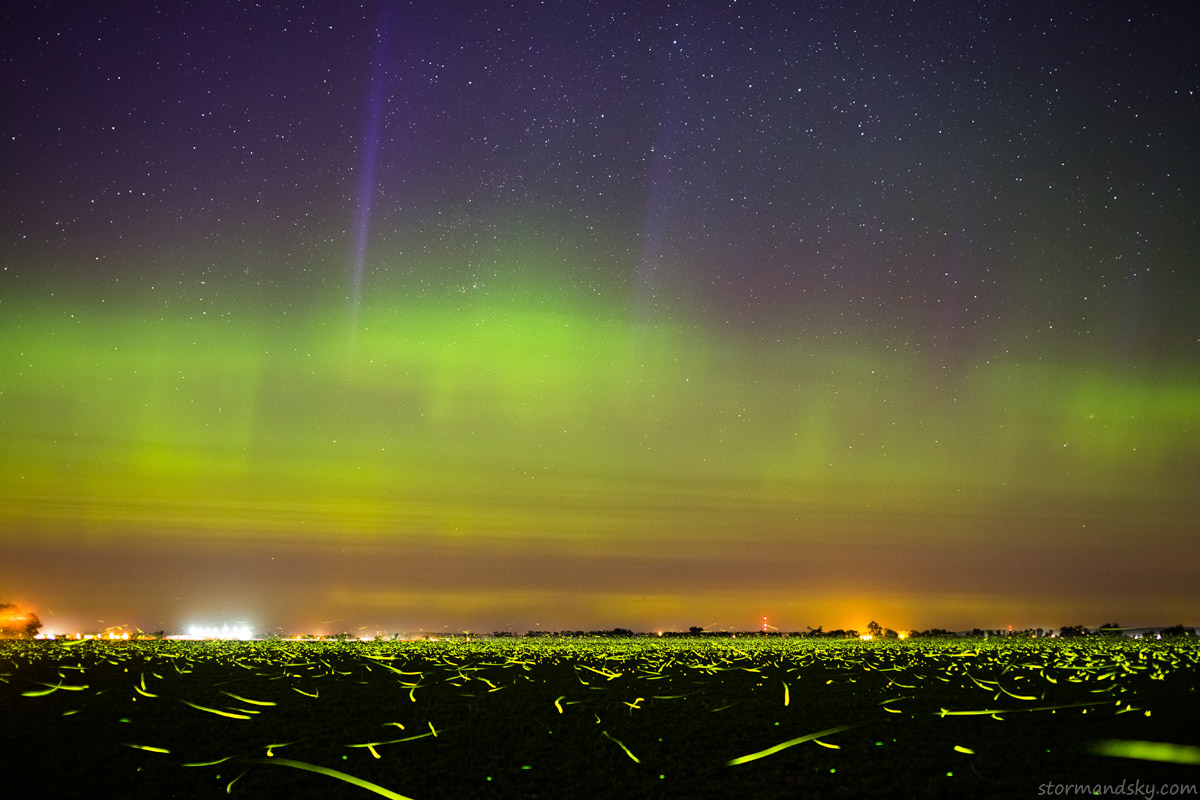 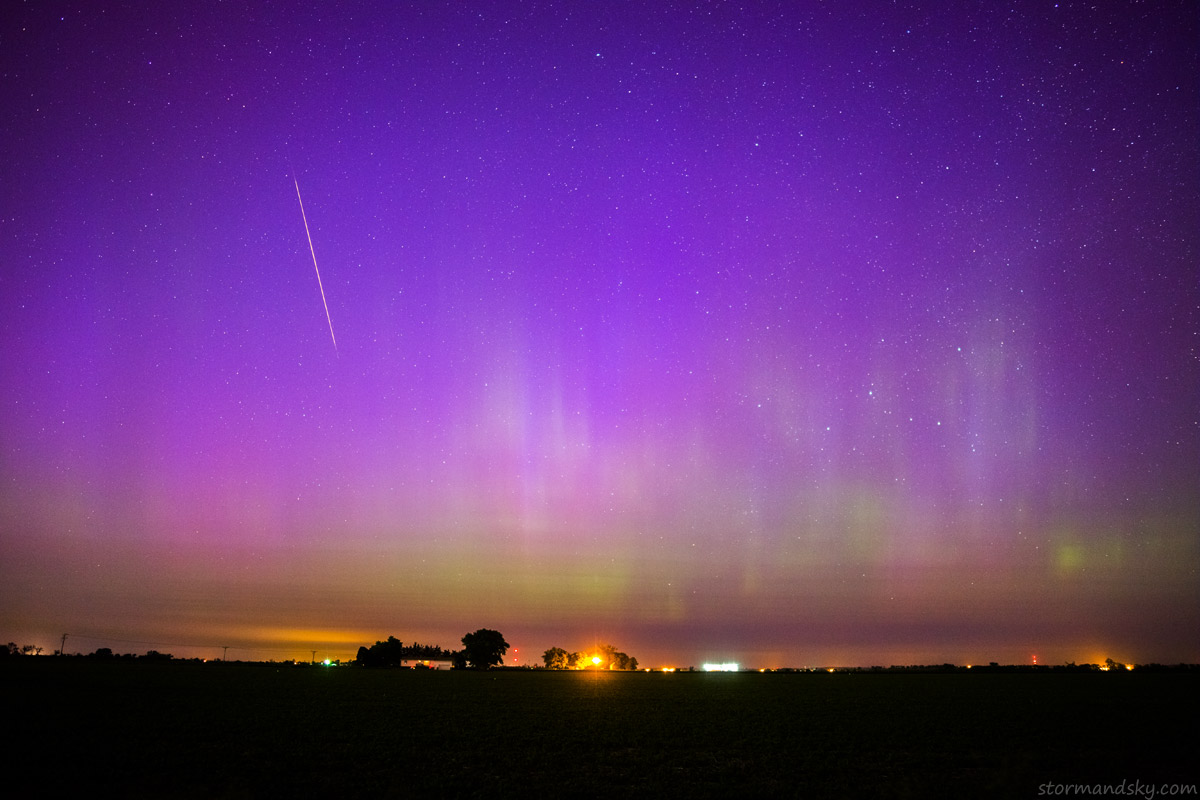 Not a satellite.  Meteor I saw with my eyes.  Figures auroras were really weak right then. 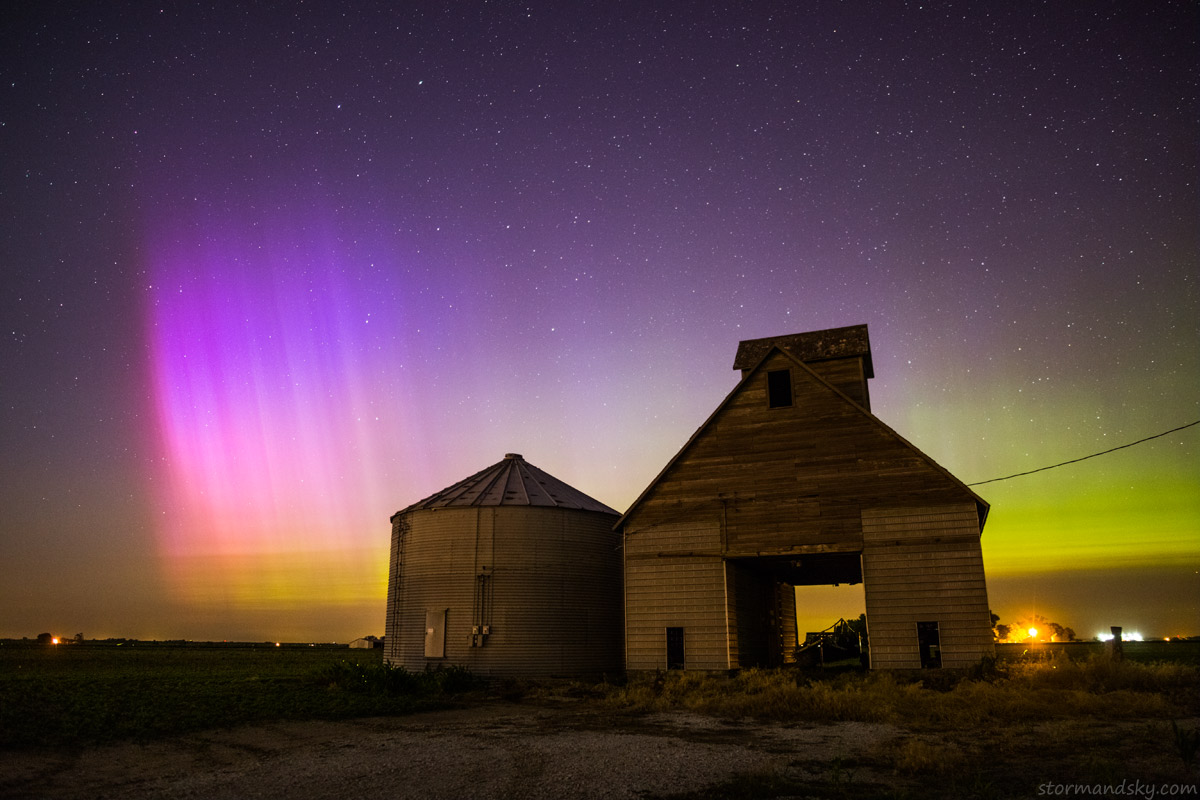 The show had gotten pretty lame and stayed that way for a bit.  Then a bit after midnight you could see this area to the northwest beaming up and becoming a fat wall.  It clearly looked displaced south of the green arc too.  You see this enough times and you know what is going to happen.  An explosion of auroras, often only lasting 15-20 minutes.  Also when the storm has been going on for a long time and turned a bit lame, these often signal the very end.  It is weird how often a substorm like this happens and seems to wipe out the show and just end it.  It is exactly what happened. 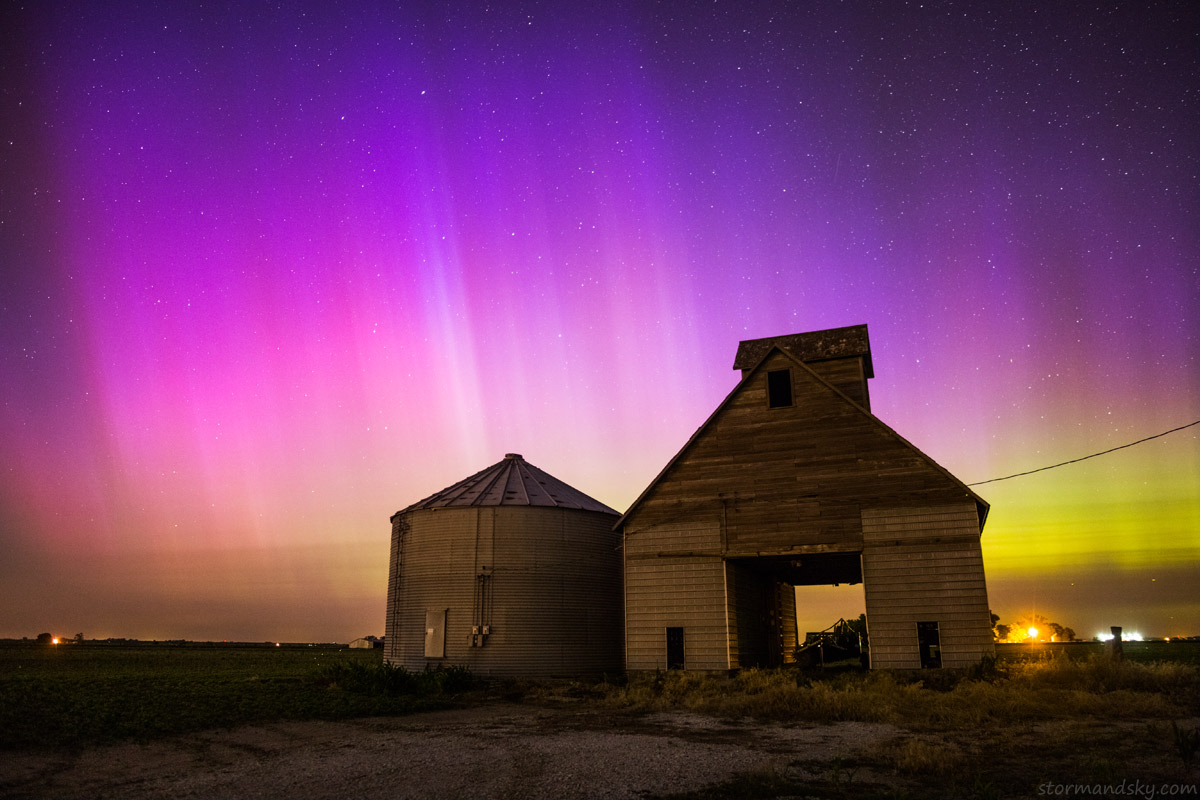 Boom.  That little wall fanned out as it continued to spread south.  Often as it fans out it dims some.

A bit later with higher camera settings as it visually dimmed quite a bit.  I was wanting lightning bugs with the barn but they took off after we moved our cars.  Car lights shining on the barn here as a car 3 point turned. 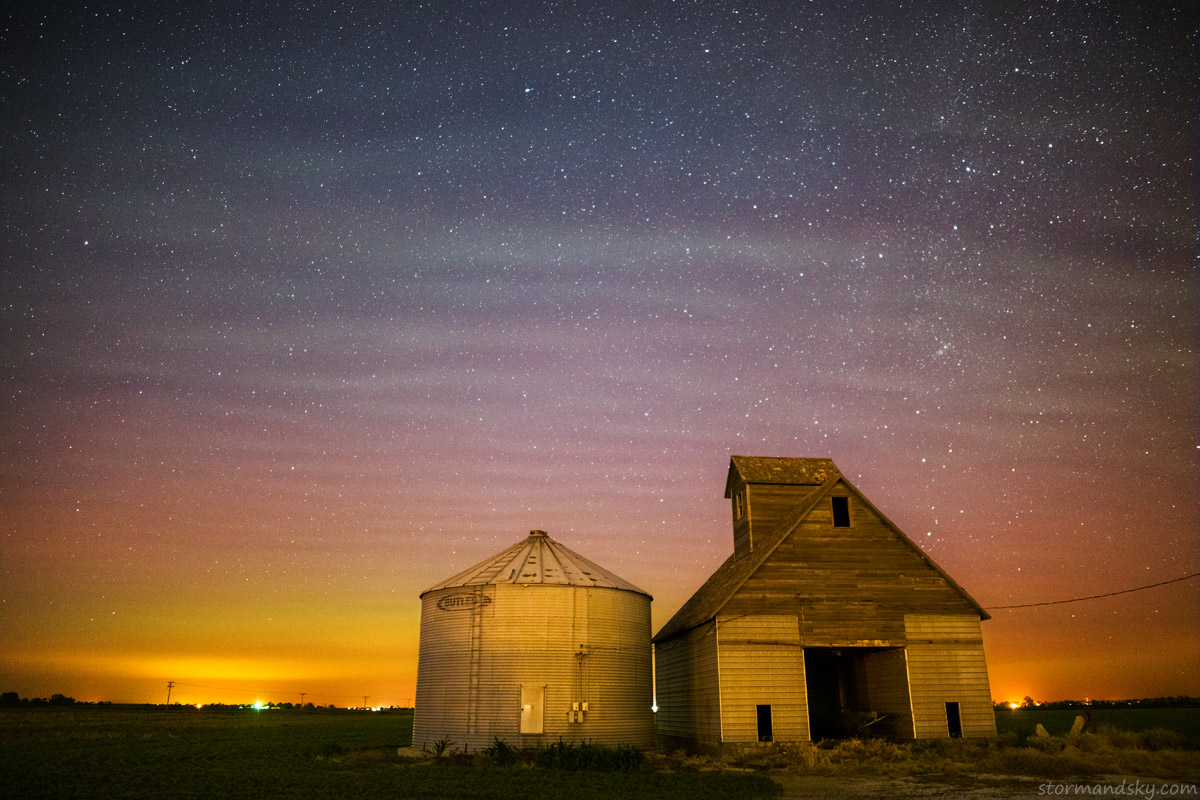 It was over.  It was now impossible to see.  All that was left were some rather bright and structured air glow tubes.   I sat there for an hour or so after it weakened after the substorm, but it wasn't coming back.  You could tell it wasn't on plots too as that Bz had been on a slow angle up for a while now.  I think there was even a spurt of it back north/positive.  Anyway, pretty good show.