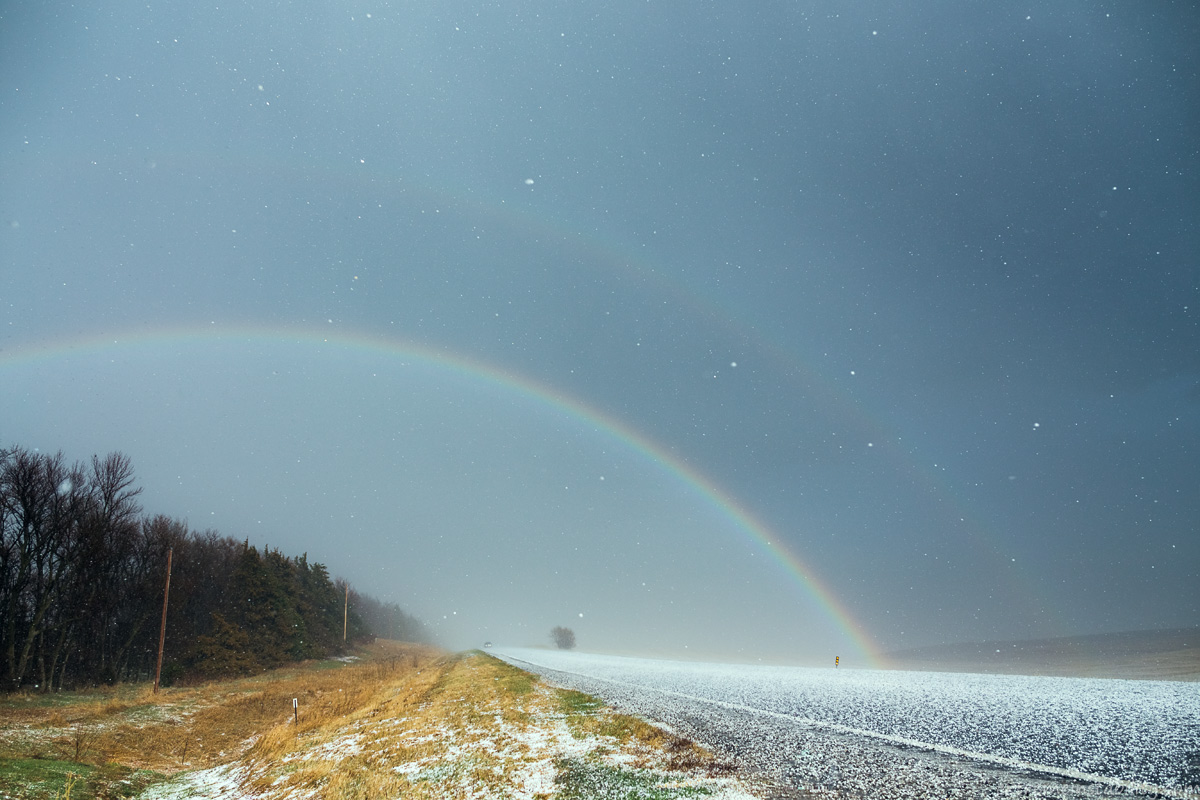 Delayed dew points were not going to help this day.  It was just a cold front op anyway, but it was the first chase of the year and close to home, so why not.  Got on a decent high based supercell near Albion.  Actually first noted its base in my rearview mirror while heading back east to stay with the front.  It fairly quickly got severe and I drove into it.  Was already enjoying the day and the 40 degree temp/dew point spreads.  My enjoying the mediocre storms for what they were would soon come to a super annoying stop. 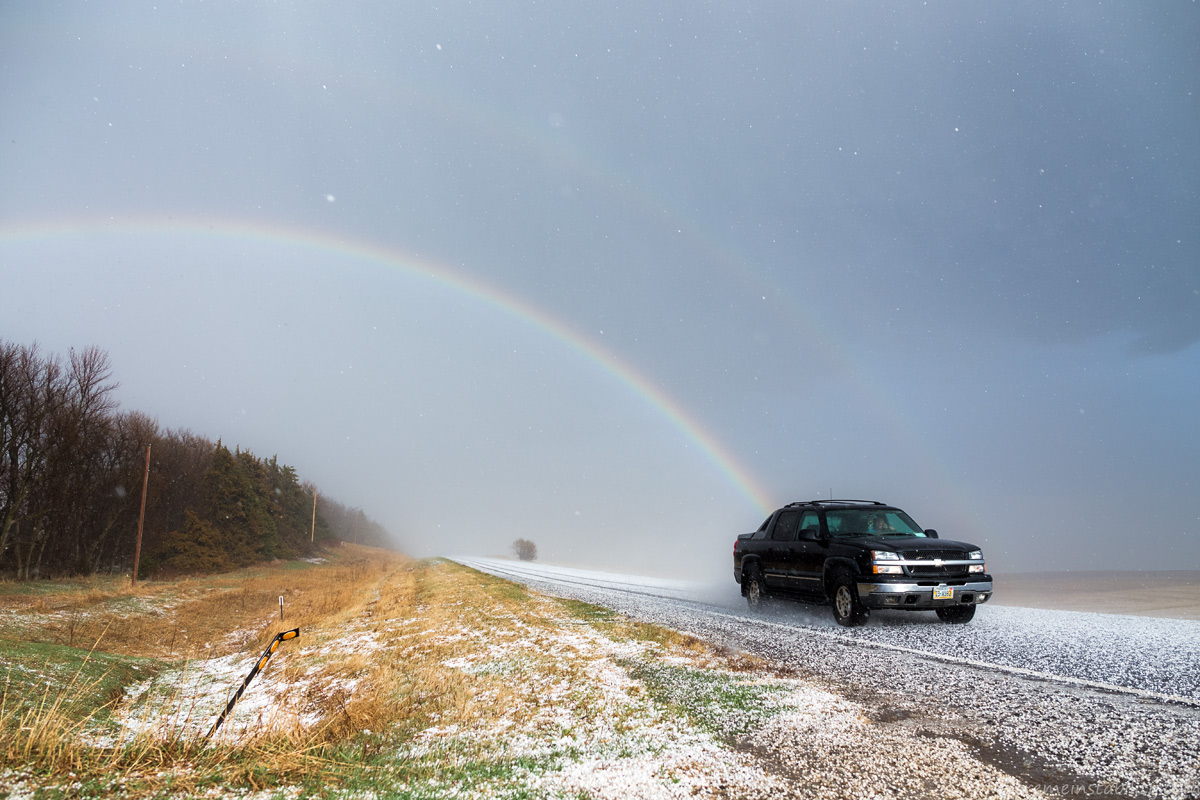 It was already quite slick here west of Madison.  I just backed in here and this truck is flying west.  Thought please please don't lose control right now. 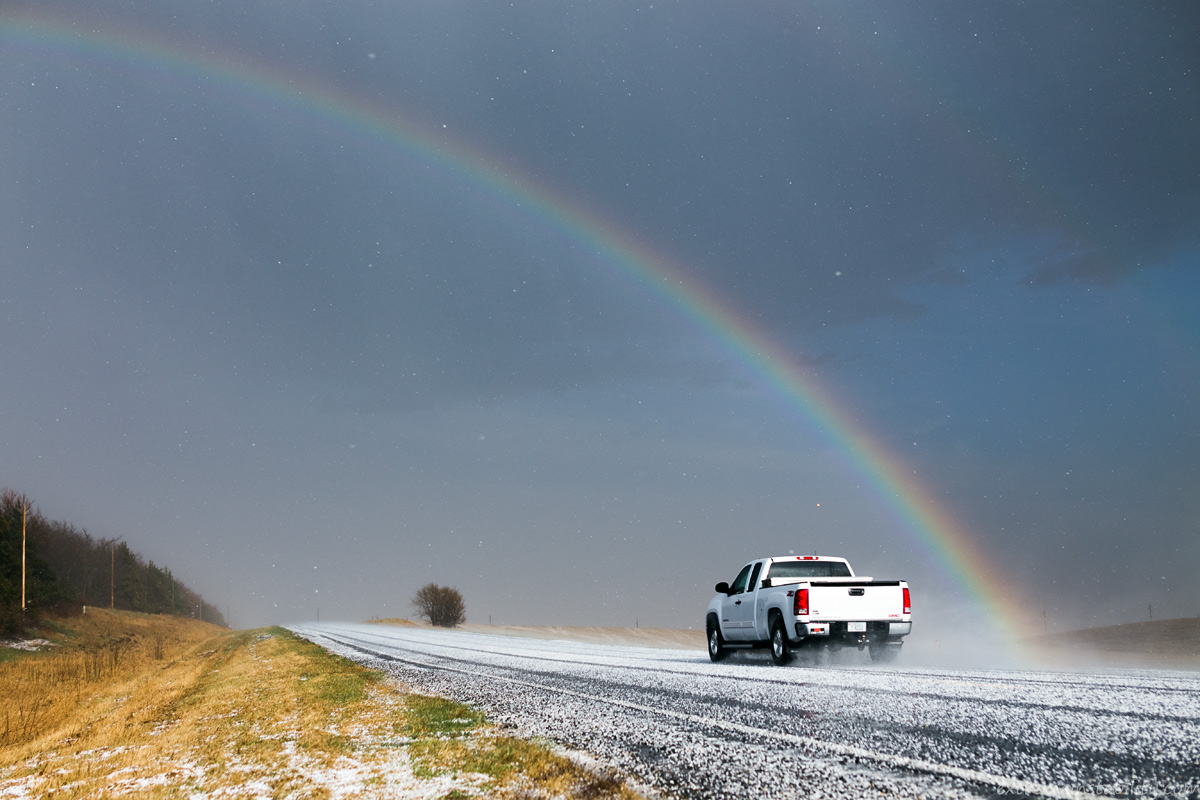 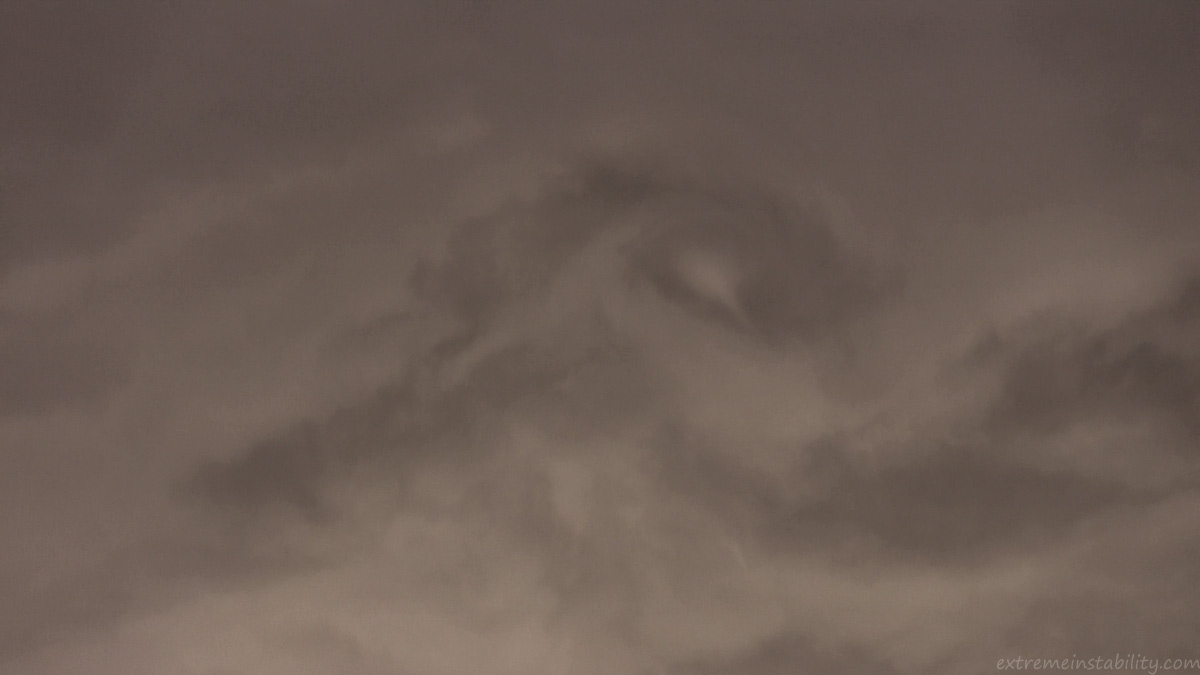 I head back east through it and just west of Madison it's a high based funnel-fest.  Sometimes more than one at a time.  Pretty fun to watch.  Video grab.

Another one as I drive through Madison.

It wasn't much to look at after this point. I opted to head east and south and try to get a nice sunset with rain mixed in.  That seemed best south some, with some storms on the boundary moving northeast.  The idea was to keep pacing it east and trying to get sunset lightning bolts.  So having some filtered down sun would help.

I stop just east of Leigh on a gravel road and try to shoot it there.  There just weren't any cloud to ground bolts.  It was cold out with 40 mph cold front and outflow winds from the north.  Needing more space and time, it made sense to scoot east some more till the sun got a bit lower.  So I did that until seeing the farm op. 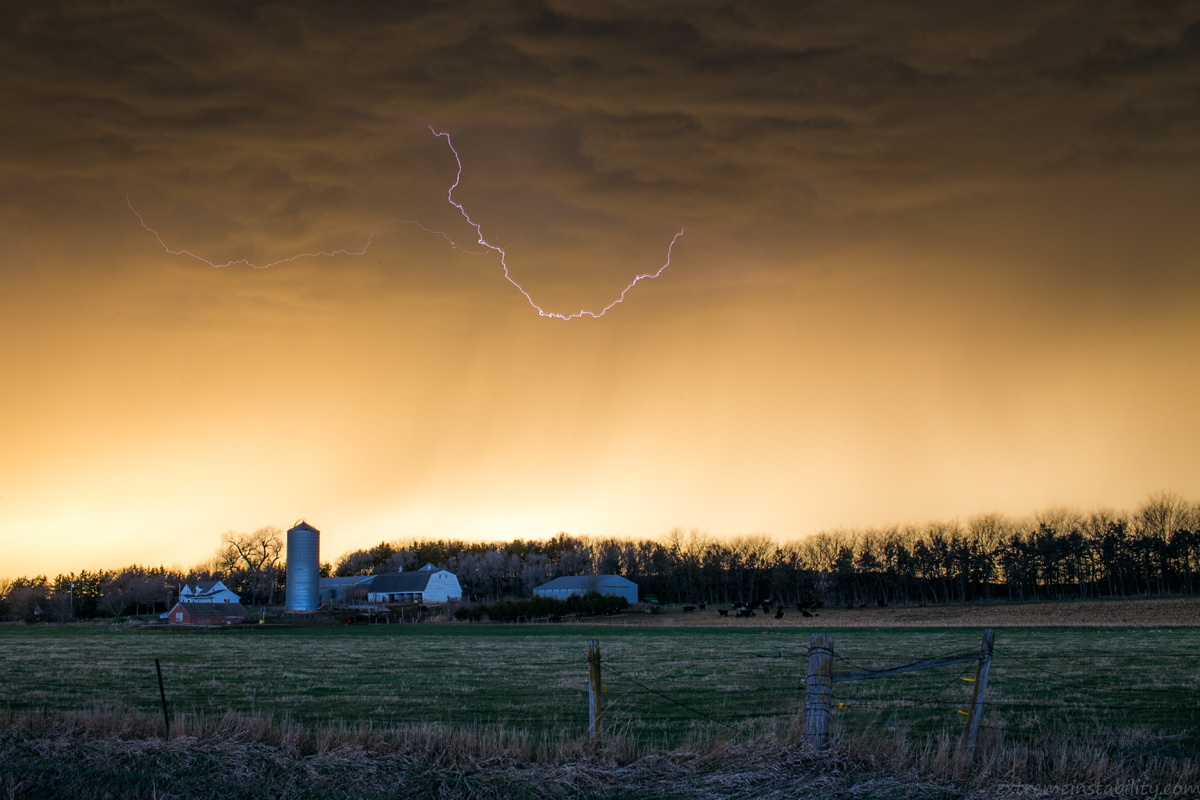 I stop here and set up again.  To do this the aperture had to be stopped down to allow the shutter to stay open at least a bit longer.  Second and a half.  Can't stop down too far or any bolts won't show unless they are really bright.  Given the lightning I was not getting out of the car.  So I mounted the camera to the window like always.  I then shut the car off like I always would in such a case, to stop vibration.  That was futile though, as the winds really began to rock the car too much.

I sat here thinking, c'mon give me a CG(cloud to ground bolt) already!  Wasn't happening.  After just 6 minutes(just checked image times) I went to leave and as soon as I turn the key, nothing.  Nothing at all.  Not the slightest turn over, just a click.  Thought, what am I missing here, with a dash of oh crap.  Thought, is it in gear.  Yes.  I look at the inverter light and it was super dim and then went out.  But it never whistled at me like it does when power gets low.  Also, it shouldn't be 100% powerless even if it was a drained battery.  Windows wouldn't do a thing.  Nothing from the horn at all.  Just all out zero power. 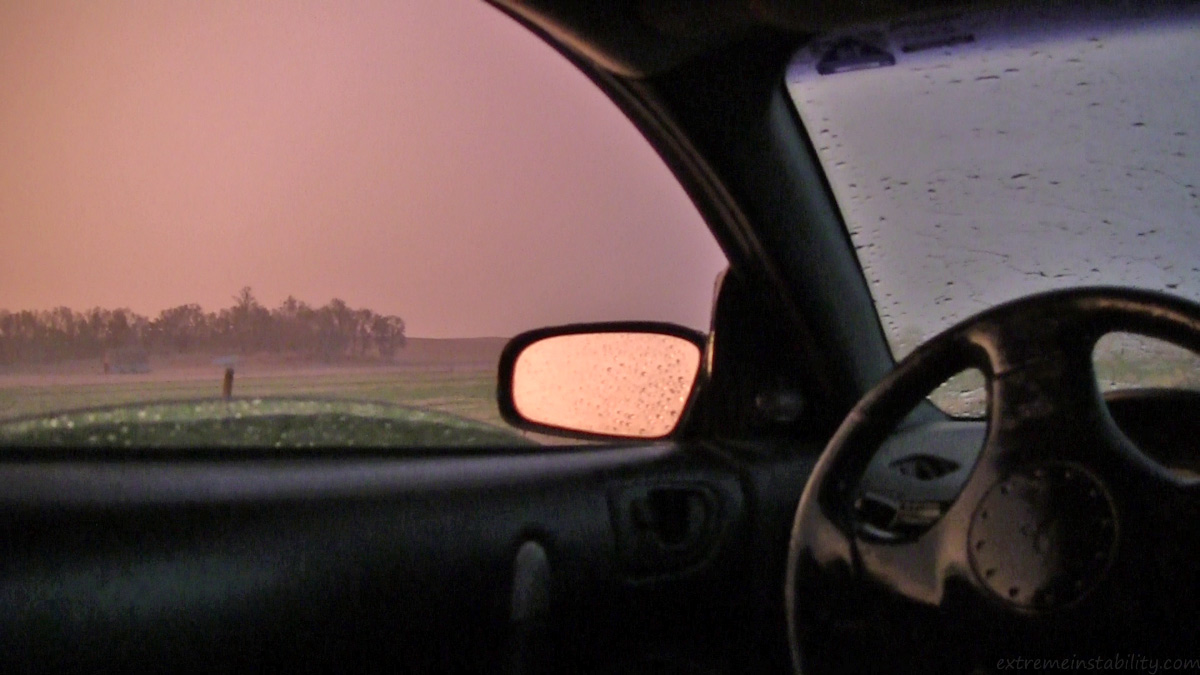 It's amazing how fast things can go south on you all at once.  Brain starts racing as it's starting to rain and yeah both of your windows are down.  There's a strong north wind blowing hard enough to shake the car and blur half the shots.  A really cold one.  And it's going to start pouring with it and do so for a while.

I grab my phone and see I have zero bars.  I also see the battery is pretty much out and that it's going to die any minute now.  I call my folks with really the only intention on at least telling someone exactly where I was real quick before my phone died.  Figured if I lost phone power they could tell a tow or some cops from near the area where I was.  But my dad said he could drive out.  A little over an hour from home.  I was fine with that, as I'd then have a ride back if it couldn't be fixed.

The worst feeling is being stuck somewhere while chasing.  Has happened twice before due to mud.  But a friend was in the area those times so it wasn't bad.  I wasn't that overly concerned at first, because I was just certain I had my coveralls in the back.  I get off the phone and think, ok I need to stay dry, incase I end up having to walk somewhere when this rain gets over.  So I climb in the back.  I then peak over the seat under the hatch and see no sign of my coveralls!  No, not cool.  Because I wore shorts.  No jacket.  I at least dug around long enough to find long socks before leaving lol.

I then kept thinking of having to walk very far.  I don't do cold well at all.  Like overly bad compared to average.  Wet 50 degrees and wind could really cause a person some problems I'm sure.  If they are wearing shorts.  Just felt a bit twilight zone'ish how all the sudden I felt super not prepared and exposed.  I wasn't afraid of the storms at all, so at least there's that.  Just hoped he got there somewhat quickly and could find me. 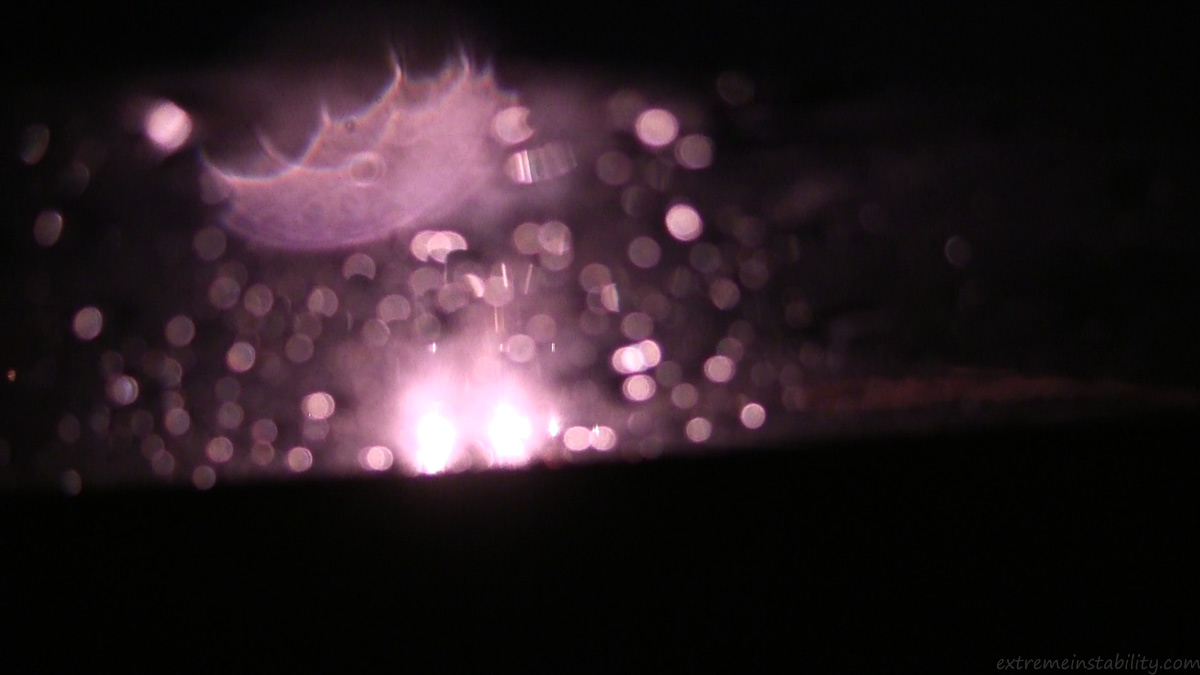 So here I am under the hatch, basically in the trunk of an Eclipse.  Rain on my lens.  Curled up head laying awkwardly over the back seats.  Had a stocking cap anyway.  It was on.  Socks pulled up.  I have a 1x1 foot foam thing I set the drone on/push in.  That was my knee blankie.  Only goal was stay the hell dry and as warm as possible, so if hours later when it stopped I had to head out, I was going to start off as warm as possible.

I've stood on hills shooting at night at 10F or worse, all night.  But that's while dressed for it.  And obviously having the place to warm up, get in not far away if it was needed.  It was in the 30s behind this front later on.  Even a walk at 50 with that strong wind and being wet, was well a little concerning in shorts and no jacket.  I mean I'd rather do the 10F thing dressed for it than this in shorts.  Actually I'd take a jacket over jeans if it came down to it.

Country people are always super nice and stop and ask if everything is ok when parked on a road watching a storm.  Yet there have been a few instance that sort of put me off of wanting to go to any doors and knock if it ever came to it.  Walking to the highway and getting a ride would be a little scary too.  If you could.  If the windows were up and I never got ahold of anyone, I'd wait till morning and head out.

Anyway, I did end up having a number of trucks come around.  I'd shine my headlamp at them from my car so they could have help seeing it.  But not a one stopped by my car.  I was like, this is so not the norm.  Then someone parks behind me, as seen above.  They stayed there forever.  I was glad because I thought, well if I get too cold they are an option.  I almost wonder if they thought the car was empty and didn't see me and just highlighted it.  No idea.  But two cops eventually show up as well.  One asked if I knew that person, which was also odd as I figured someone called them and it would likely have been that person.  It was fun trying to explain what I was doing.  Told him I was sorry for getting him wet as he first came to the car.  The last thing I want is to be a bother to anyone when out and about.

My dad eventually gets there and the cop leaves.  We sat there forever trying to get it jumped.  We'd get more power to things but no turn over at all.  Sitting there I kept thinking, for all my car knows it has the Blazer's battery in it right now.  Yeah the posts go into the battery but that's where the car is hooked up.  Any other time on a jump it doesn't need any charge time.  So it not doing anything different was not a good sign.

He stands by the engine as I try again and this time sees sparks coming out of the ground cable where there's a little bit of a crack in the wire covering.  We were about ready to head back and leave it there till the next day.  The problem wasn't the crack but the connection being corroded.  The posts looked fine.  It was the hidden areas inside the clamp itself.  Once we got that undone and cleaned with some coke it fired right up.

This is a little nuts to me.  Car shows no problems, then all the sudden this corroded cable in there is just too covered to let the car start.  Or to do anything powerwise to the car.  How can that even be?  The only thing that went down after turning off the car there was the wind rocking it a bit side to side.  Something is missing to this being the cause.  How can corrosion inside the clamp let everything powerwise in the car work just fine, then in an instant be too much of a problem to let the car have any power at all.  All after stopping and turning off the car for 6 minutes. Nothing ran the battery down either, because my inverter never whistled for low power while sitting there.

Maybe something shook the cable earlier and the alternator was just running everything.  So it was fine until the moment I turned off the car.  The battery had been drained already.  Bet that is what happened.  If that can happen like that.  I sort of need to find out and clarify how it happened because it's going to cause some paranoia heading out chasing the next weeks lol.  Lovely this was the first chase of the year and on April fools day.