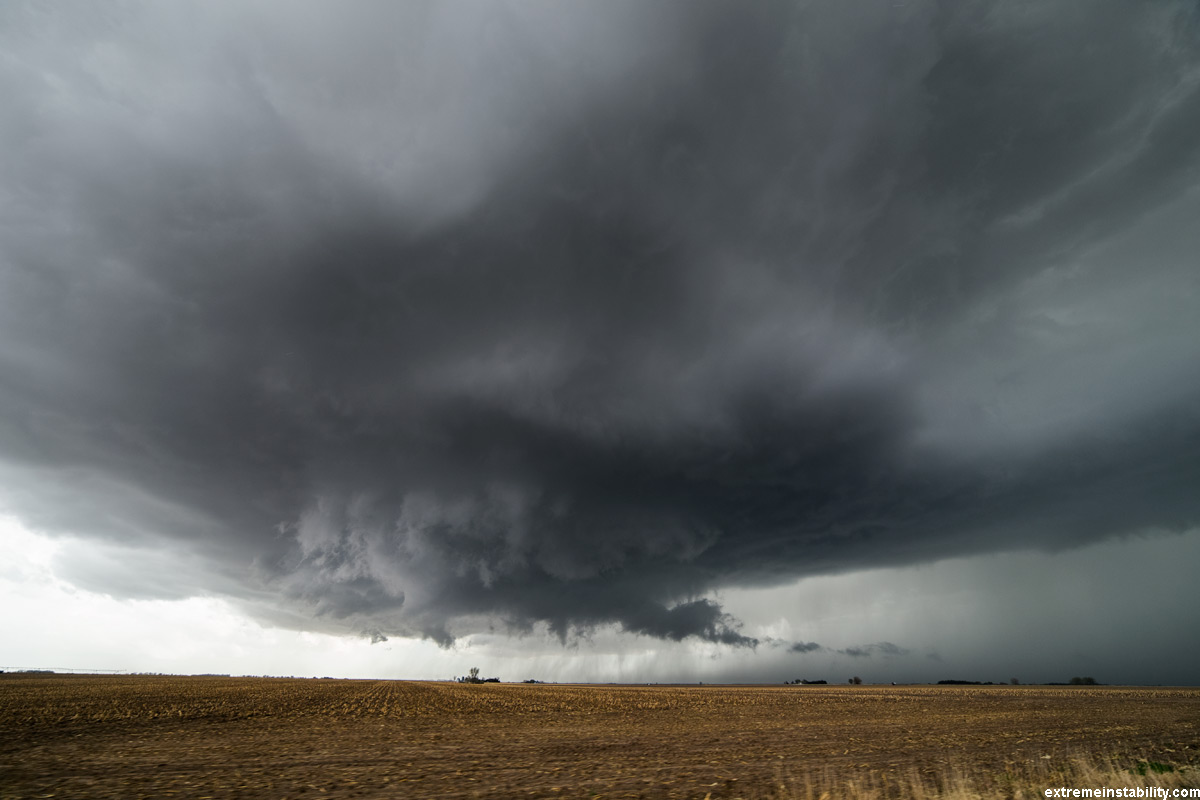 Well I thought morning convection killed Nebraska's chances for later on.  Anvils blowing northwest from Kansas didn't look like they would allow any heating later for the dryline arc in NE.  There was some clearing out west, but it didn't look like it would last long.  But then convection south let up and so did the anvil generation.  Just enough so to make me think there may be a window out west, not that far.  The favored area is the last bit of arc before it turns due south.  And that just barely had a window of heating.  Some storms fired further west first.  I was still blowing off the day at that point.  But as soon as there seemed to be a let up in the anvils, I flew out the door.

I intercepted the supercell south of York at York.  Wasn't that great at first, but not long after passing York, it got cranking.  These images start off a bit later.  Think I had flown north some more and headed west into the path, on the north side of the storm.  But not that far past York. 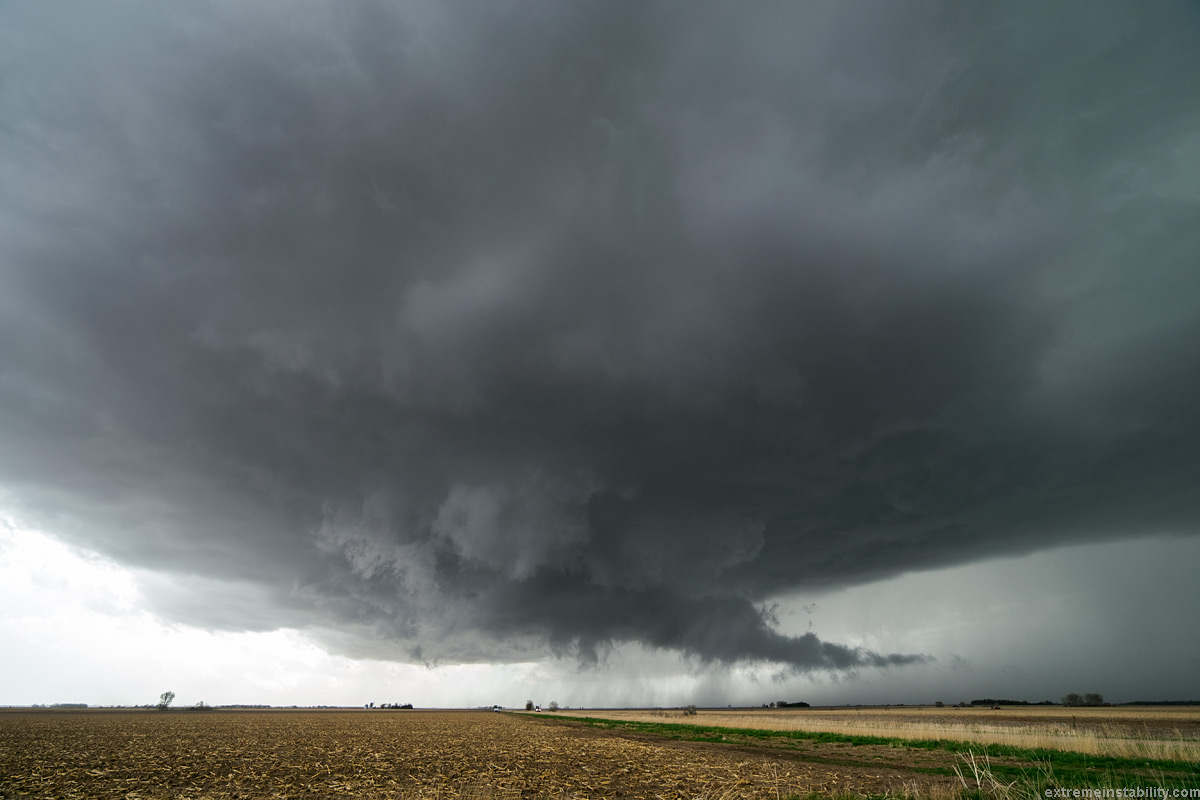 This was the phase when it produced what I guess was a tornado.  More of a landspout looking dust vortex under the rotating wall cloud.  I don't feel bad having missed seeing it.  The storm was getting fairly amazing. 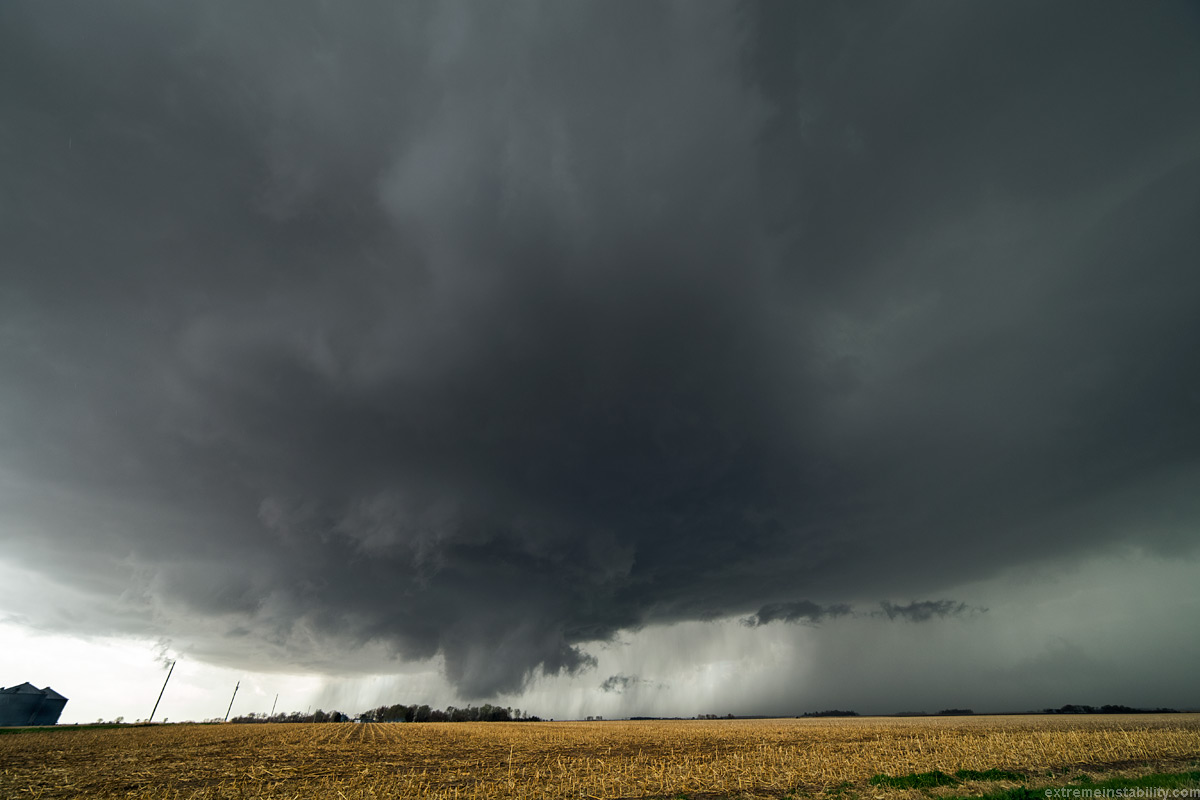 Moved north a mile or two as it wasn't planting a tornado yet.  I stopped here as it looked like it was now about to plant.  For some reason it never did.  Undercut surely the cause. 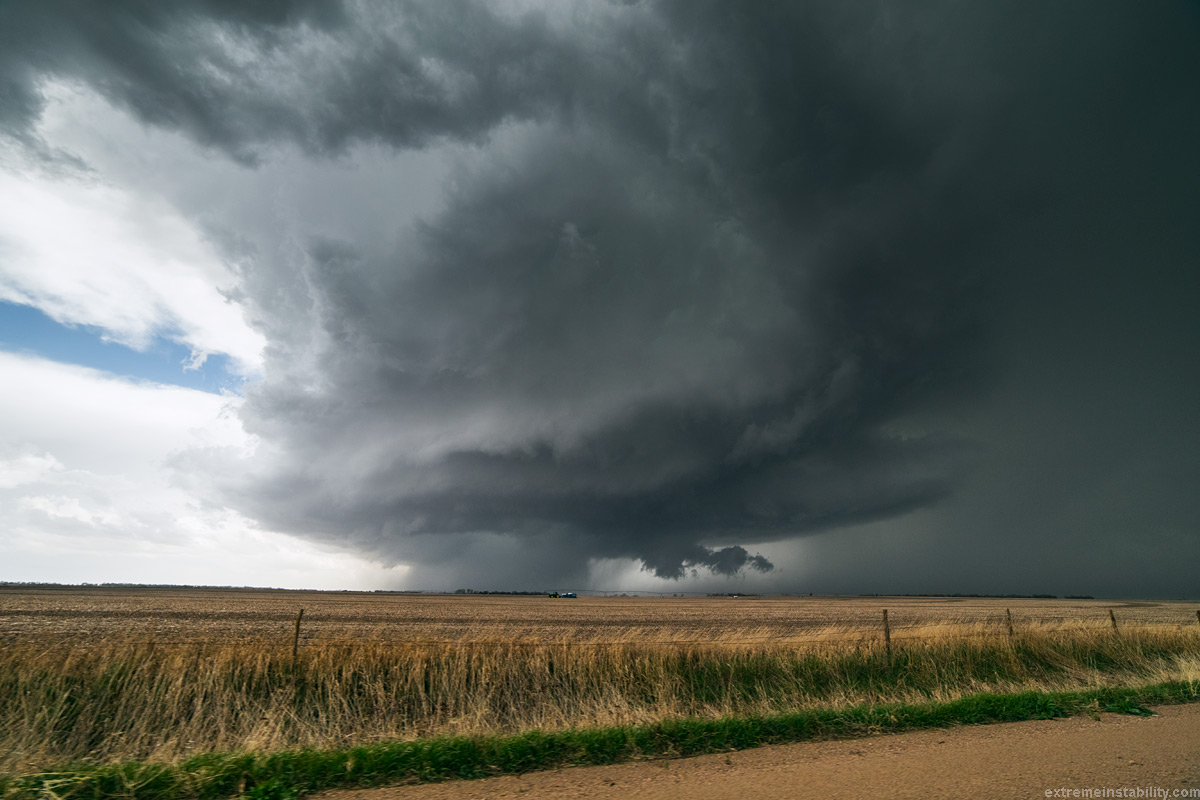 Moved north again.  Shot with ultrawide 14mm.  The storm was moving probably 40 mph.  Wasn't much time to watch while stopped.

Probably moved north again and stopped.  From now on any tornadoes would be hidden by rain.  Never much view in there, even up here in the notch. 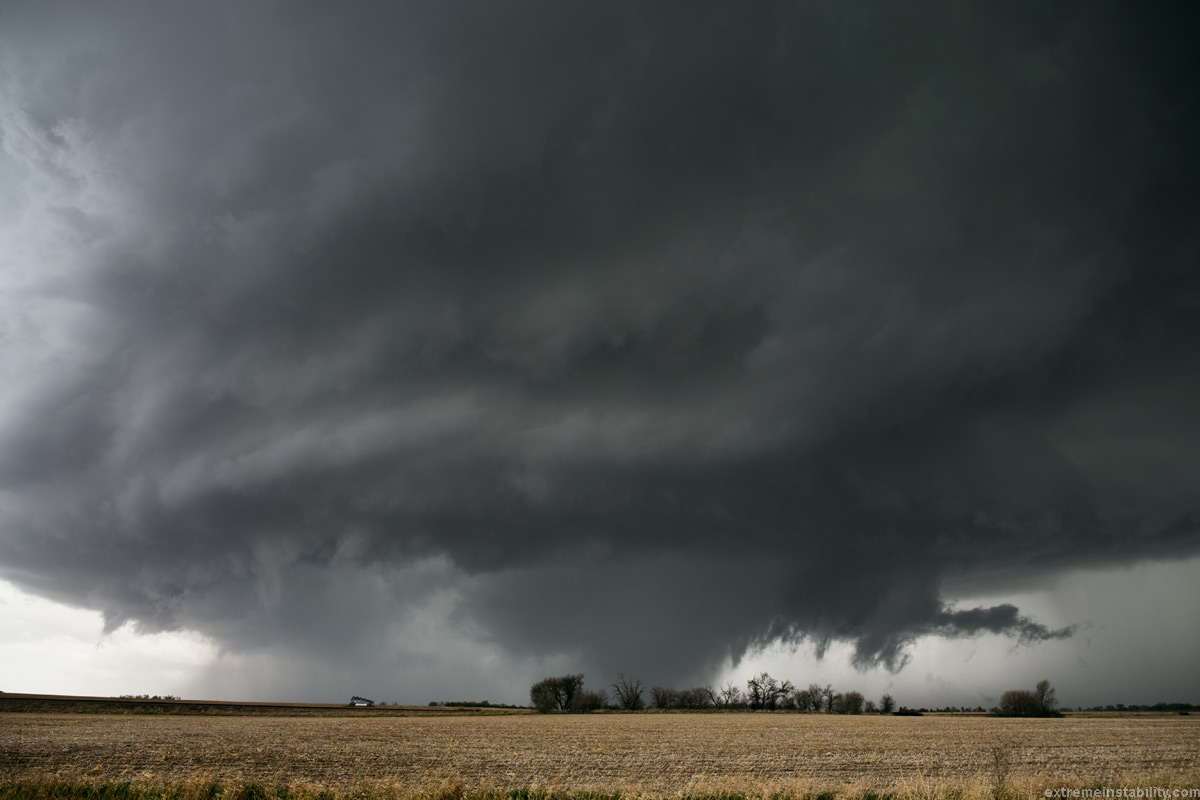 Looked tornadic but not sure it was anything but rain in there.  Great storm though.  Kind of wished I had tried to fly the chopper at this point here, but the winds were usually a bit much.  Mostly it was simply no time. 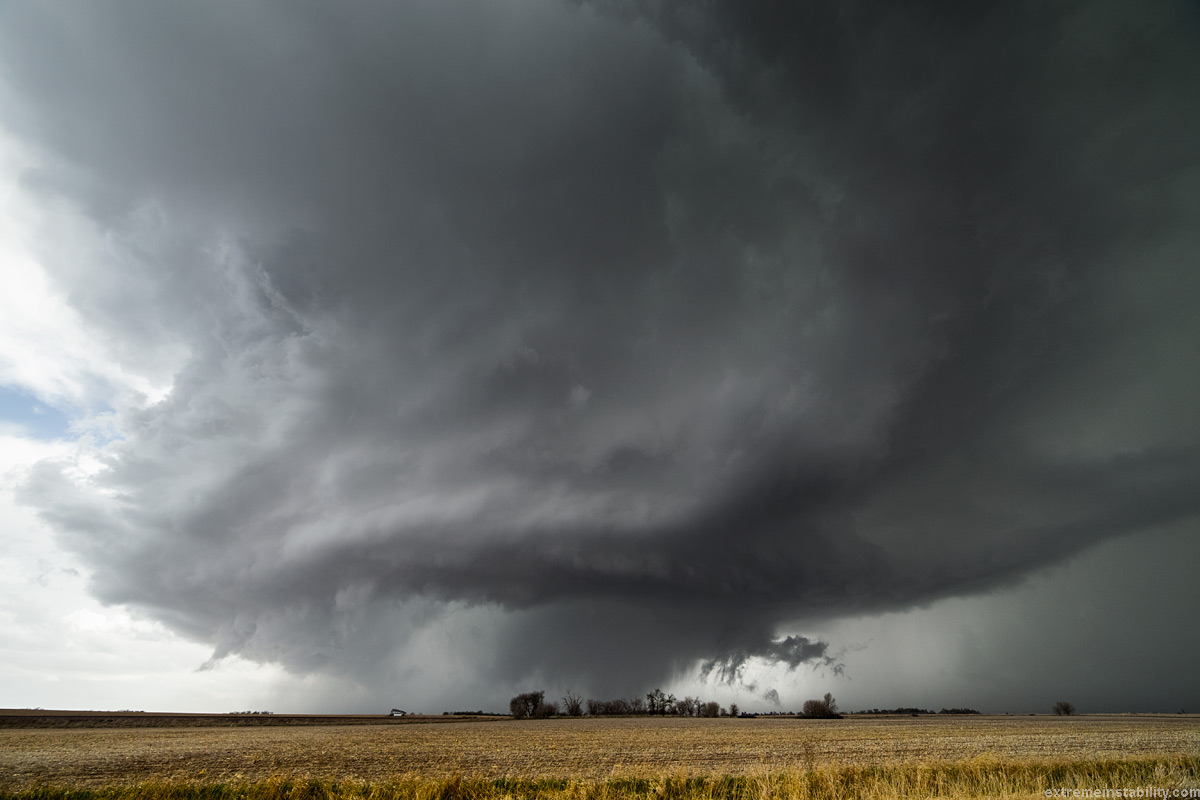 Ultrawide 14mm on again.  Storm is just about on me, yet looks way off with that crazy angle. 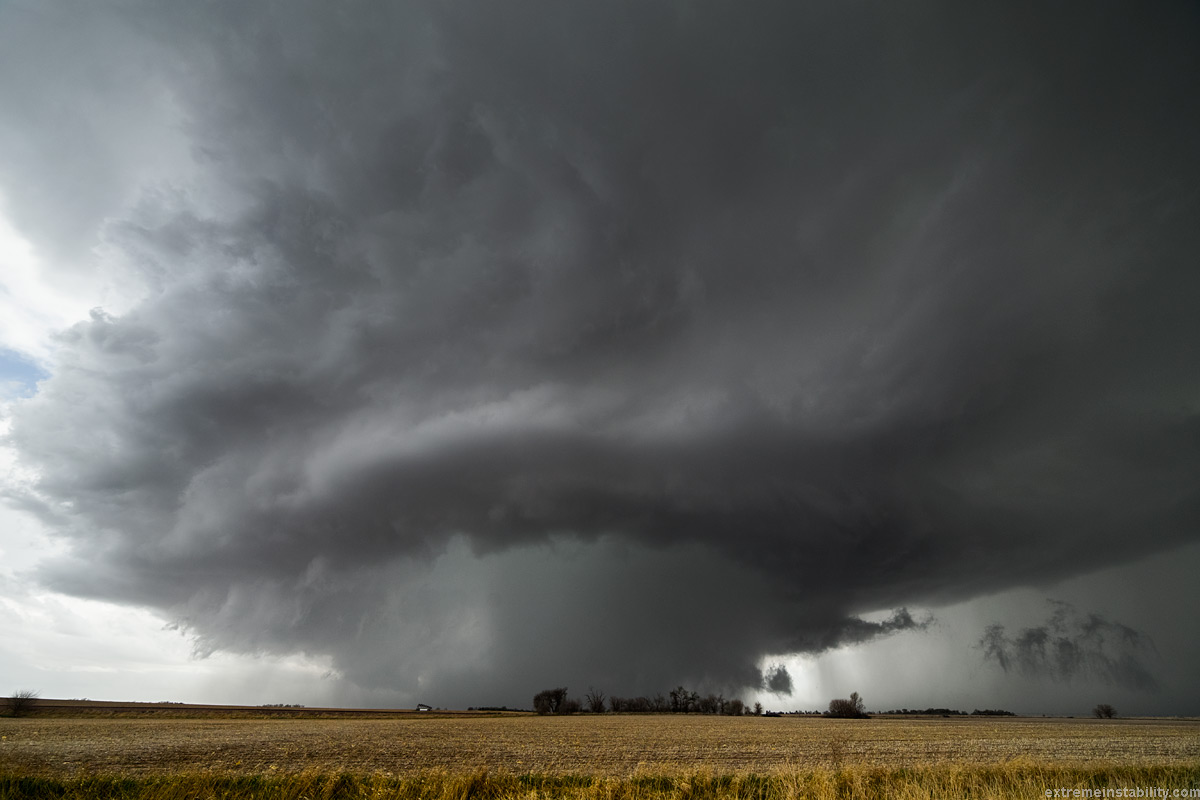 You can see how it isn't far off on the video below. 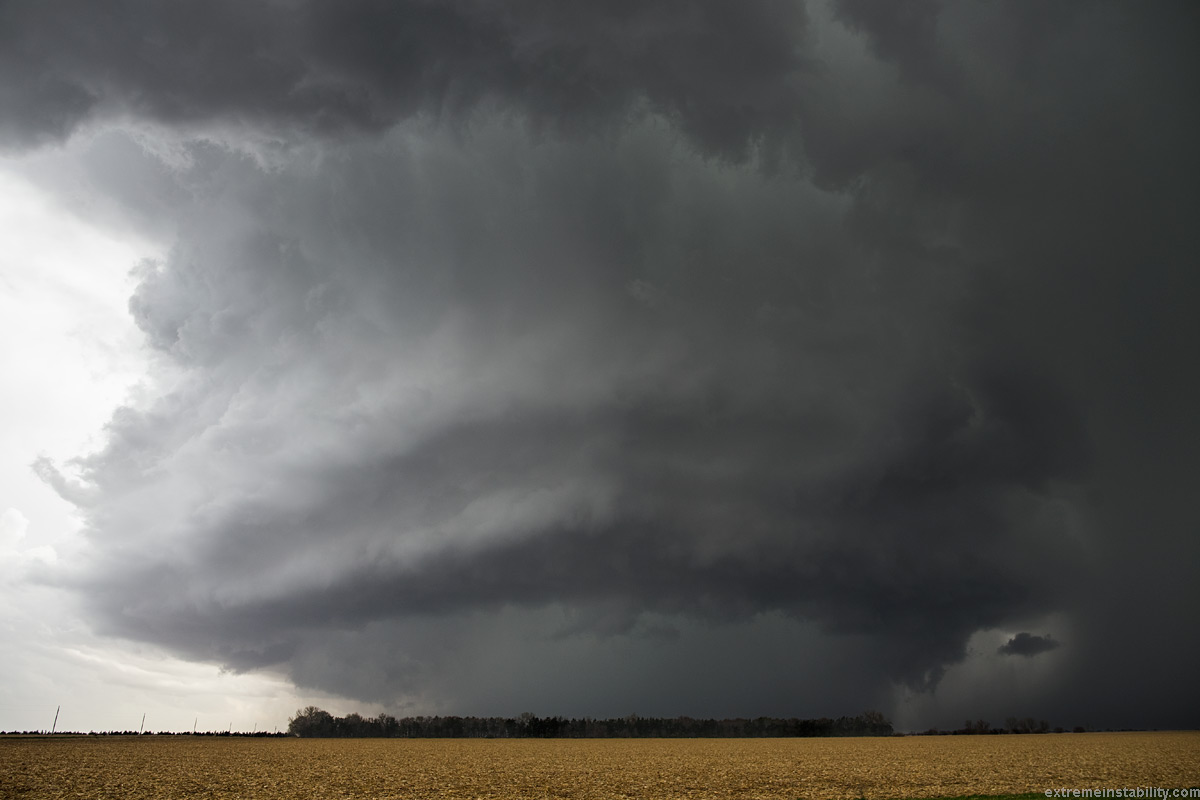 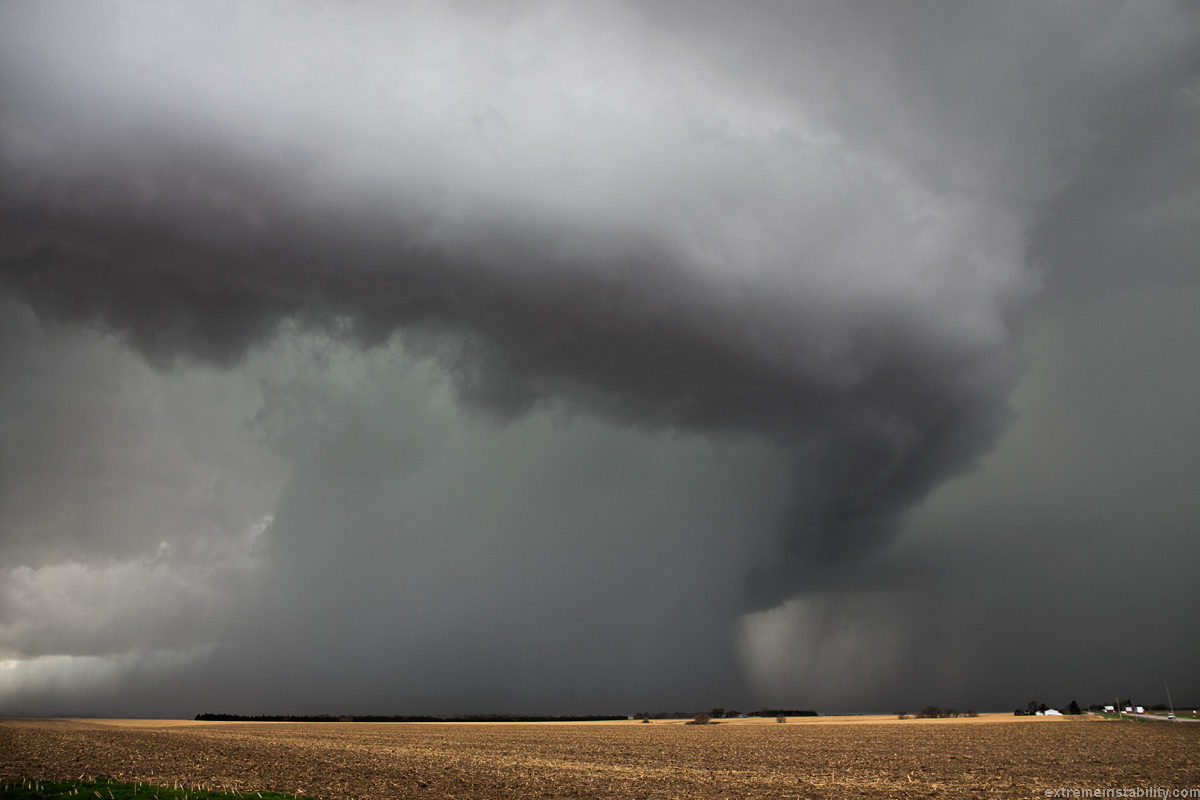 Moving north again.  I tried to go north and get ahead of it again and beat it across the river at Silver Creek, but it cut me off.  While up there in the notch looking south I never did see the tornado that hung out the back of this.  The rare time being in the notch gives the worst contrast on the tornado, as from the east the tornado was trailing back out of the rain.  While from the north, just a whole lot of rain between you and it. 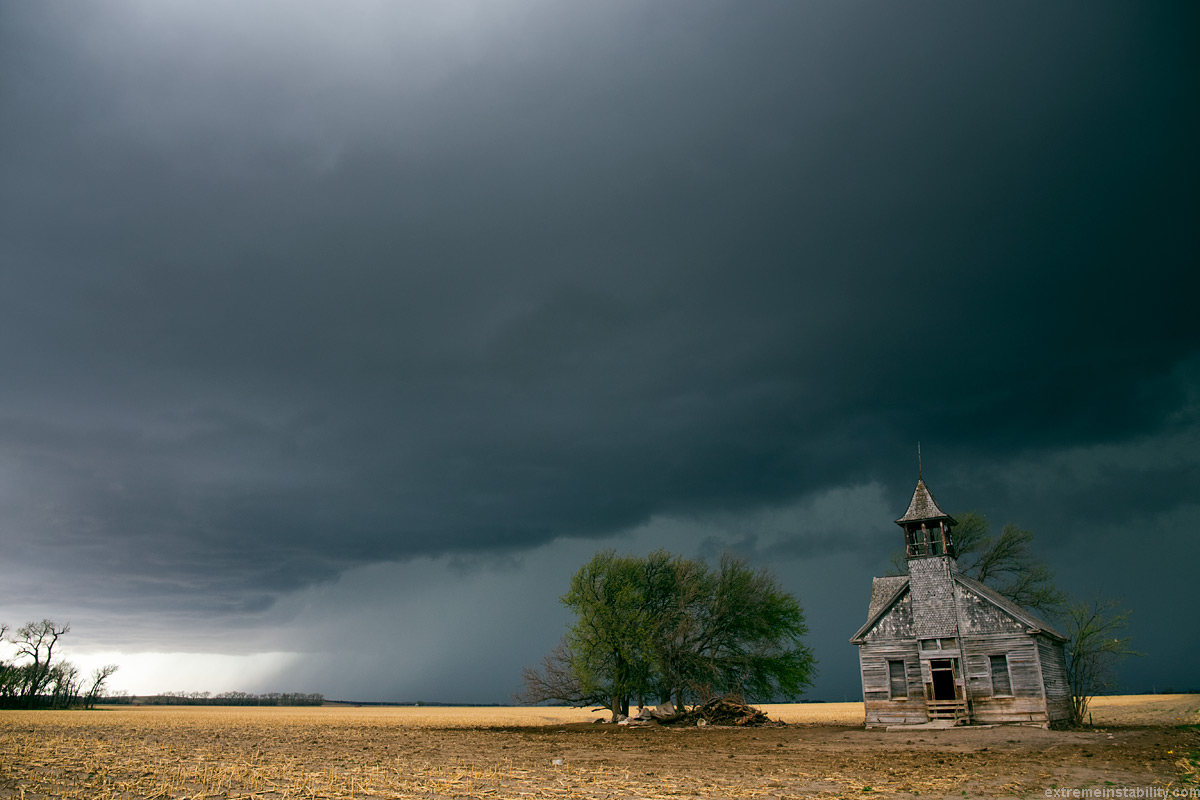 I passed this cool old school house going north while trying to get in front of the storm again.  After the storm cutting me off, I had to come back to it and shoot what I could with the storm behind it.  Rather certain I could have shot the hang out the back of the storm tornado from here. 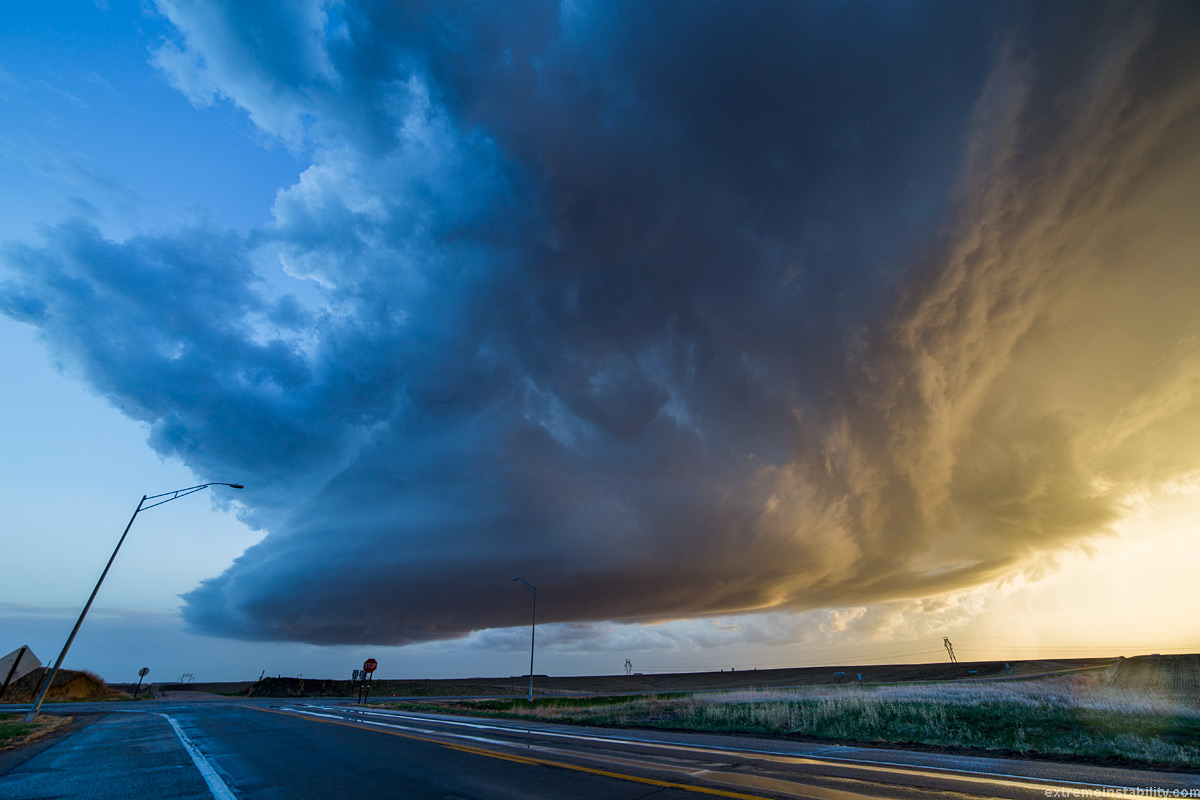 Stood in line at Applebees in Columbus with several others for what seemed like an hour, only to bail on that and head back out chasing.  This was the view up by Madison Nebraska. 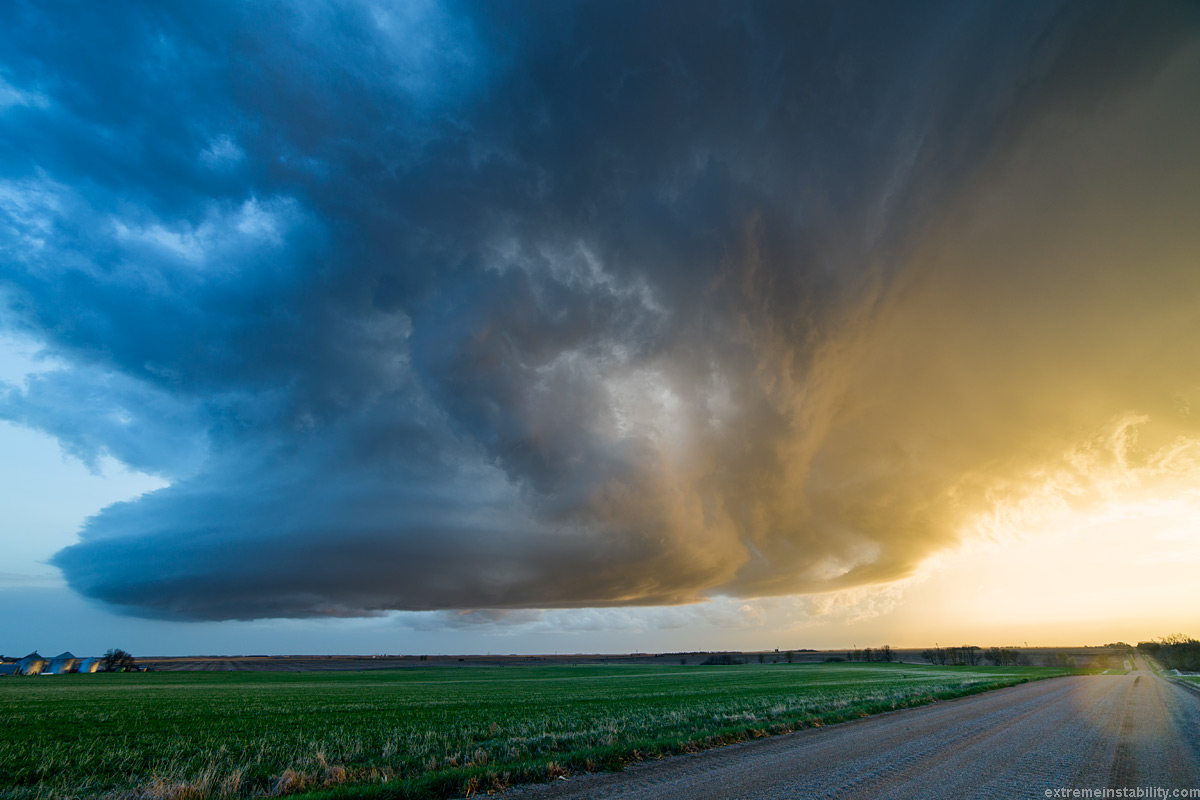 The gravel roads were great all day, until I had gone for this storm.  The earlier storm rained on many of them.  Managed to find a never ending stretch of slick crap you couldn't drive above 40 on without fearing the car would go in the ditch.  The ones where you leave black tire tracks in the "gravel" behind you as you drive.  This one here was good though. 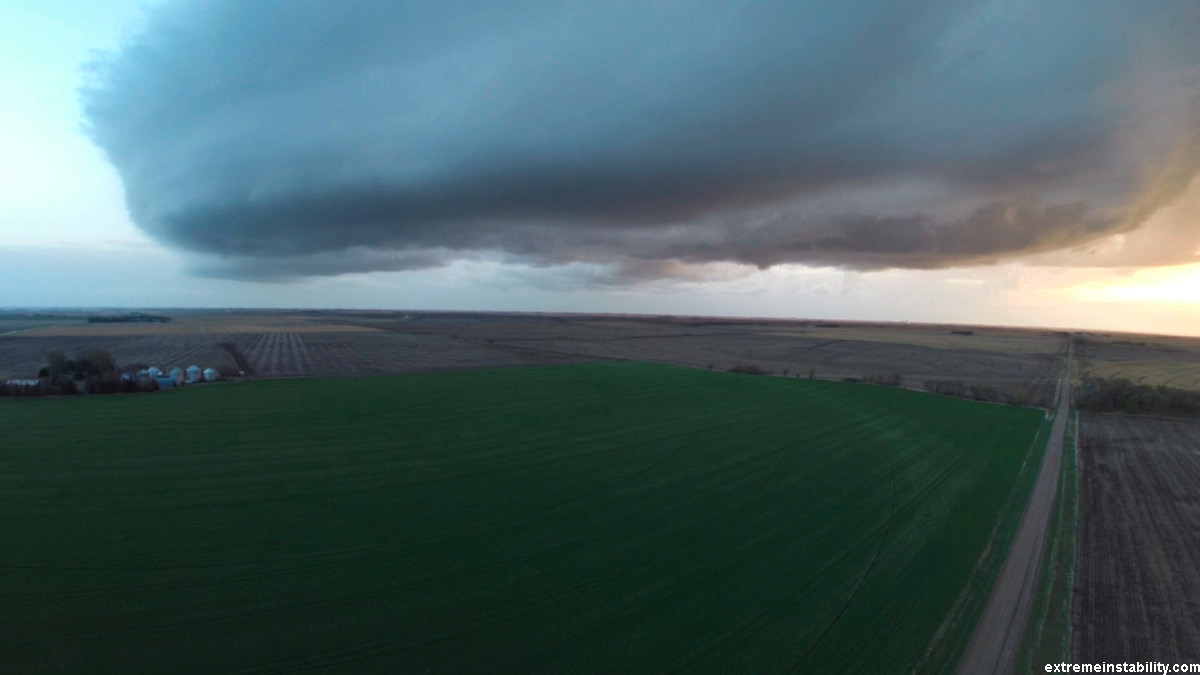 While sitting there it dawned on me, I could probably try and take the chopper up on this one. It would be first time trying on a storm.  Problem was wind.  Another problem was I couldn't find the av cable so I could see the FPV screen of what the camera sees.  Gave up looking and just took it straight up.  I then backed it up into the wind.  Then if it got too windy, I could at least bring it down near me.  Was no sense in flying it down there away from me anyway.  And the storm situation wasn't worth risking the chopper over.  Close tornado and maybe I'm more game.  Finally found the cable in my car and could see the FPV.  It was clear I'd probably need to find a way to point the gopro up some.  With a tornado though it would be perfect. 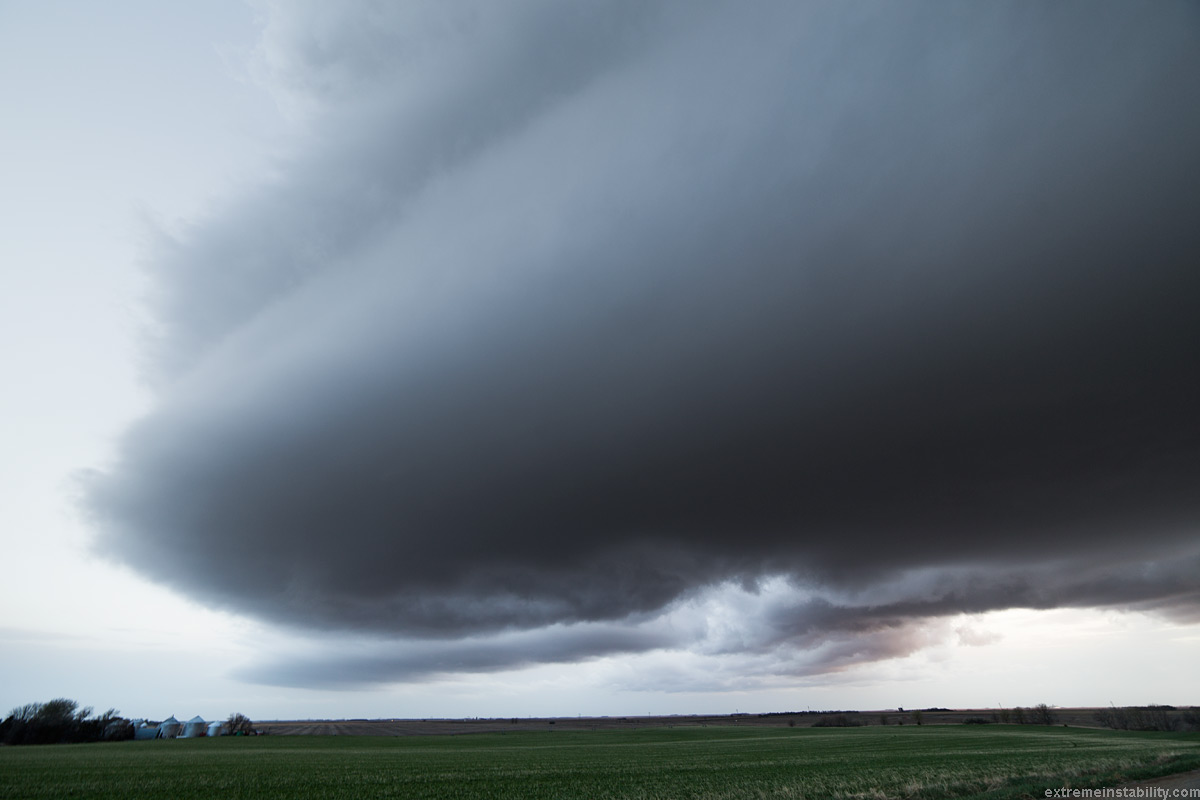 This is 24mm.  It wasn't very far away at all.  Gopro makes it look so.  As I was looking up watching the chopper I could see low clouds streaming by fast.  You can see some on the video.  It's hard to know how much worse the wind gets going up any bit higher.  It didn't have any issue with these winds though.  But the winds changed fast on these storms depending on where you were at.  North it wasn't bad.  Once on the east side more it got more windy.

Just a short video.  Quad 4x timelapse is at the end.