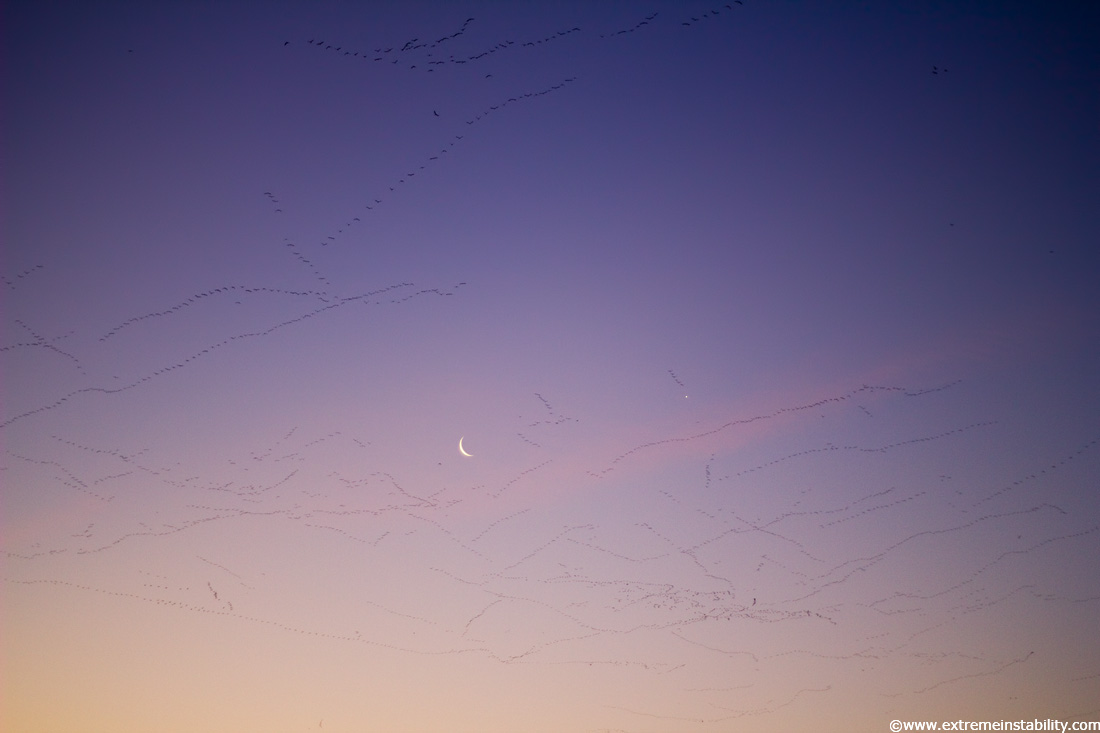 Pre-dawn March 1st at Squaw Creek, geese leaving the refuge to go eat breakfast. I drove down there because I was sick of waiting on the refuge to update their 8 day old count of 170,000 geese. Thought I'd go and see for myself. Of course they put the update on this day, that they counted the day before, 775,000 geese. I was there during the 1.2 million in 2009 and can half gauge off that how many are there. They have 2 larger "pools". 1.2 million pretty well filled the entire east pool tightly. Just a lot of damn birdies. Hard to appreciate it without being there. (edit: they finally updated their site and indicates a count of 1.3 million) 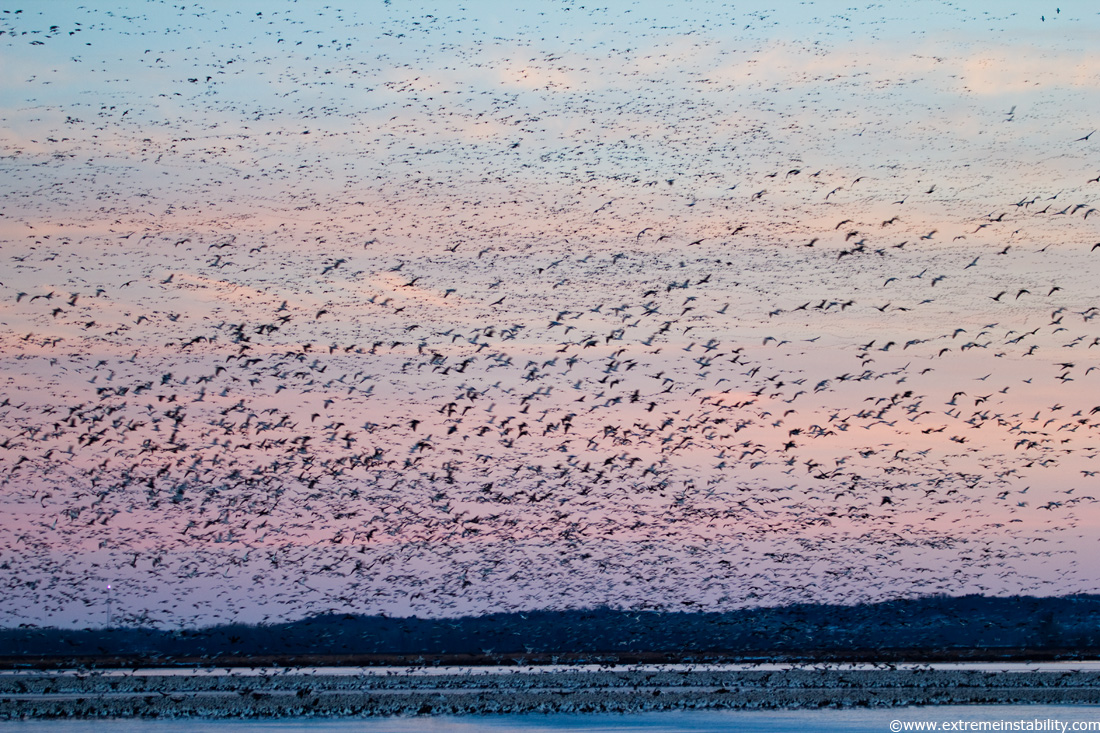 You can tell by pile size that a whole lot of geese head out before there is any sign of light. Pretty much whatever geese are going to head out in the morning to eat will have lifted off by sunrise. Seems 1/10th or so are usually hanging behind for the day. 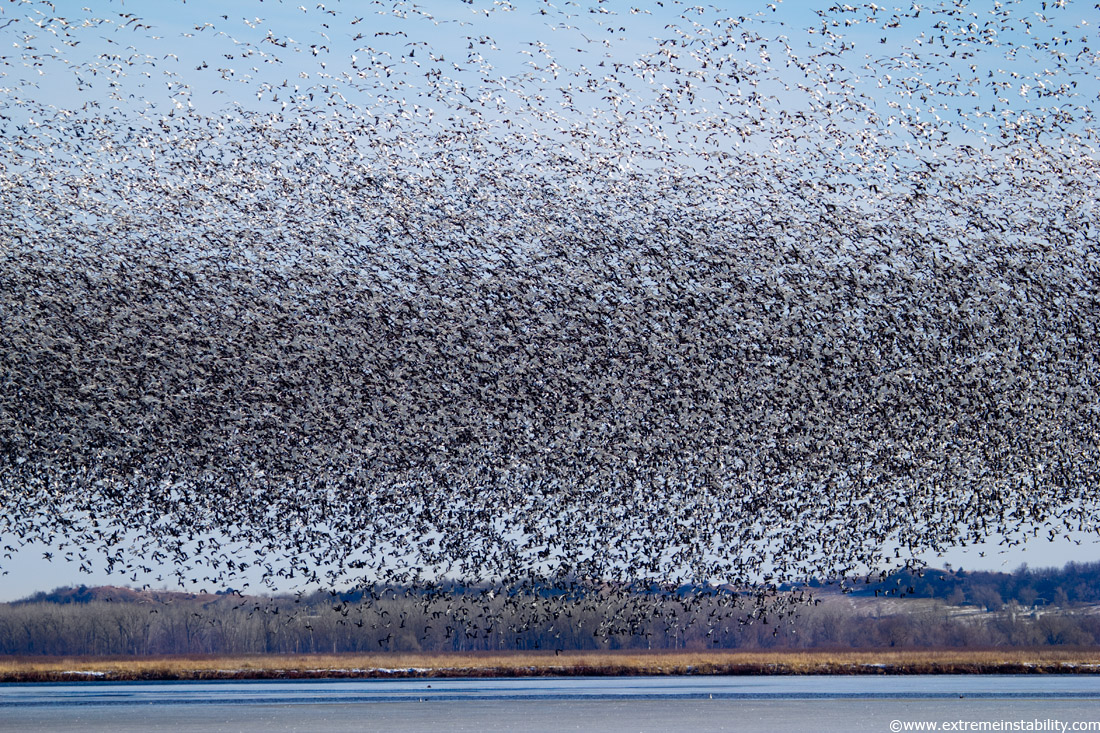 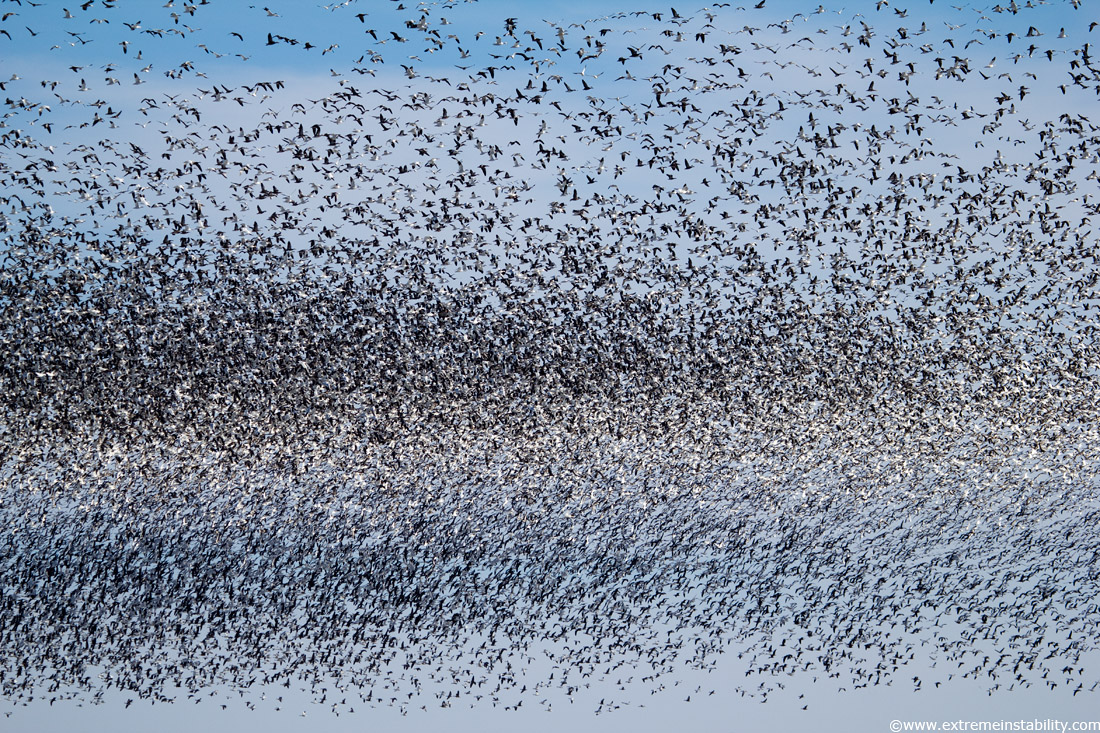 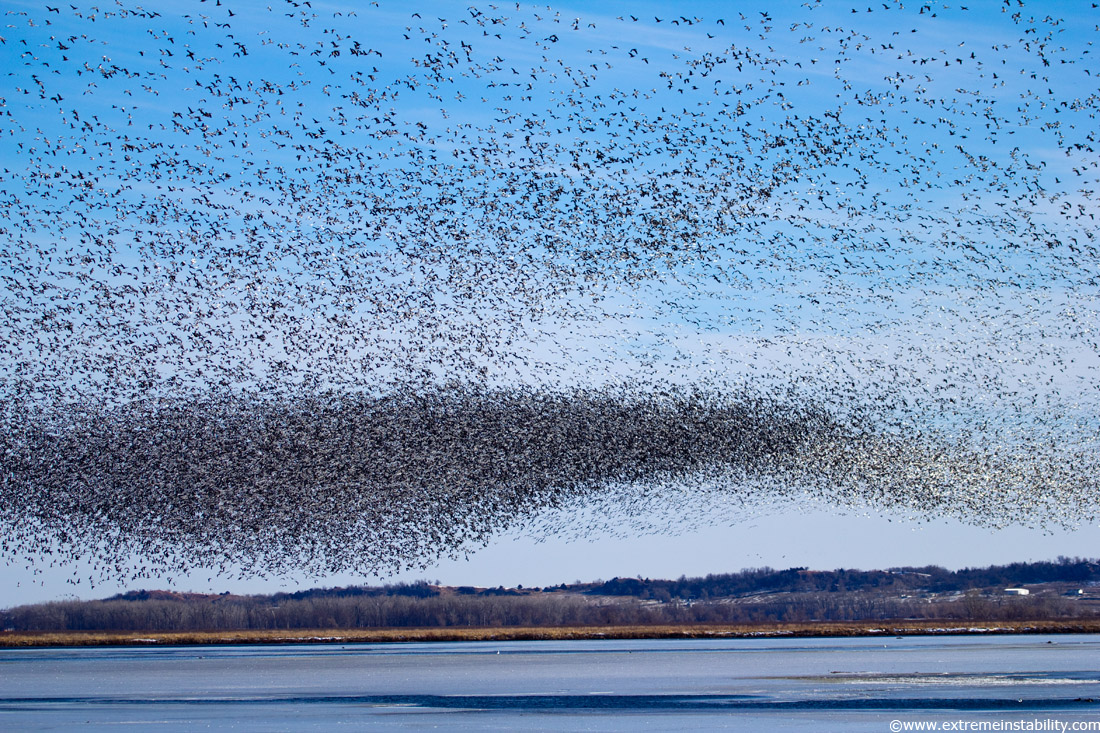 There were hardly any eagles here this day, seemed like 5 maybe. For sure one is causing this display. 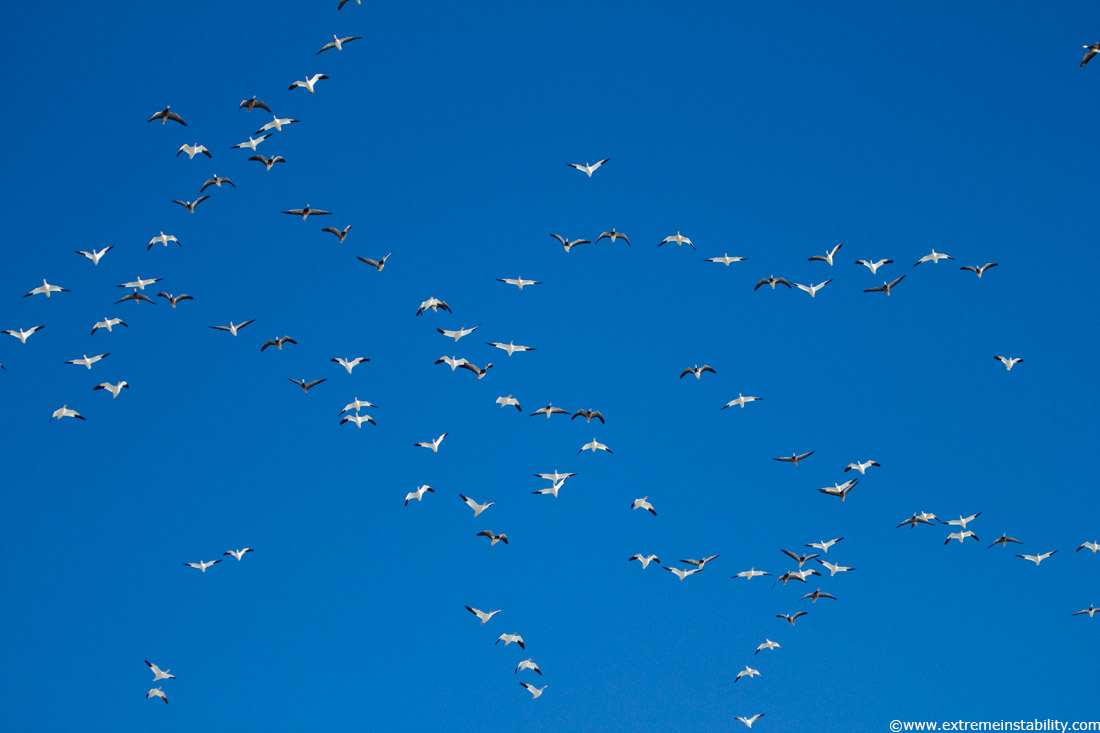 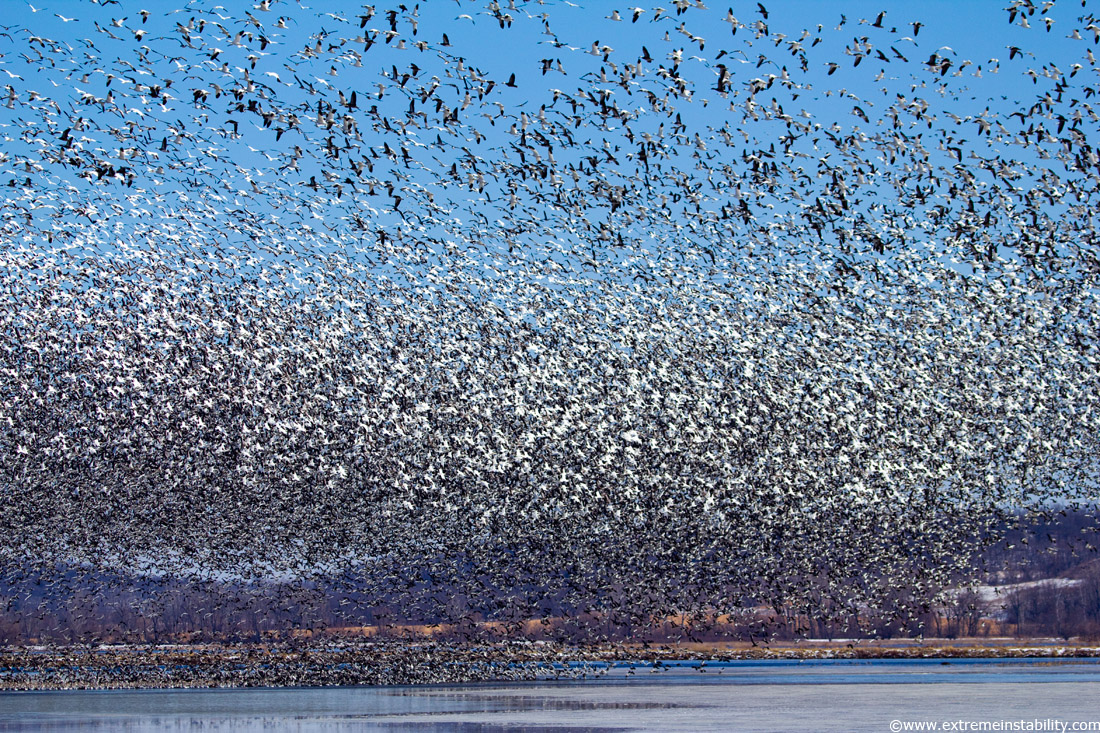 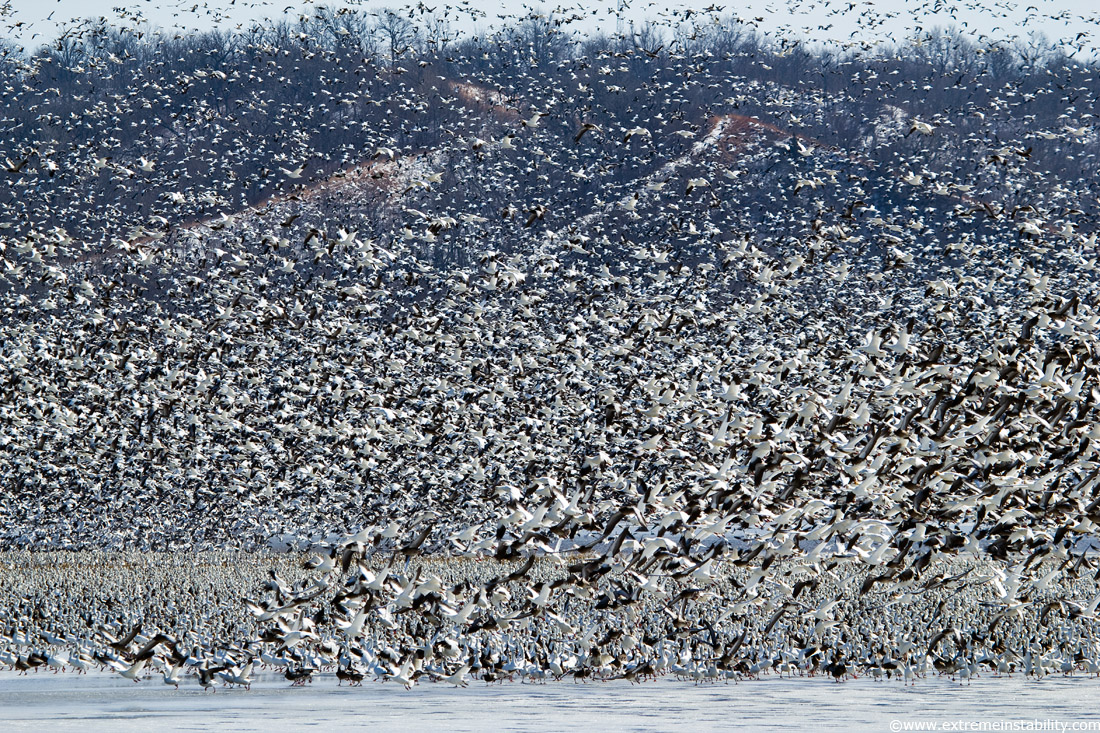 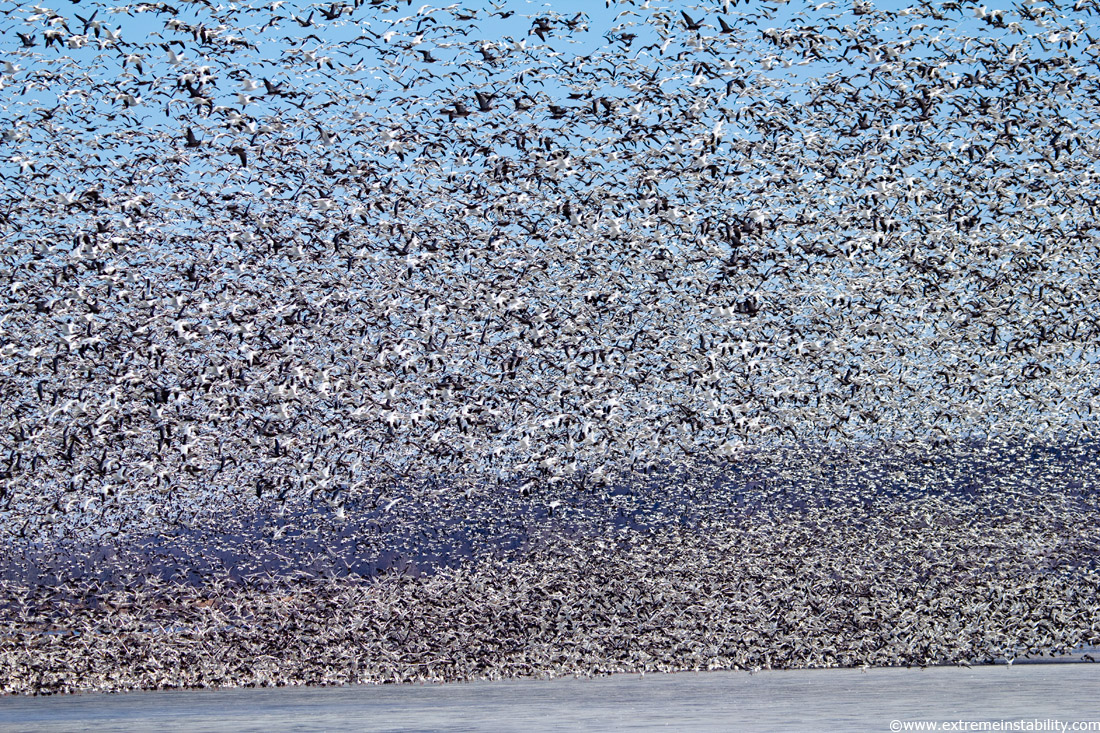 All of these just aren't the same sized down for on here, compared to much larger images. They can be simply crazy to look at at the larger sizes. But I have zero desire to post them any larger. Besides they really are bandwidth hogs too, being so full of detail. It's interesting, a shot of like the sky is around 20 mb on the T2i in RAW. Shoot something like the above and the RAW will be around 33 mb. Really chews through card space. One of these days I blew through 28 gigs. 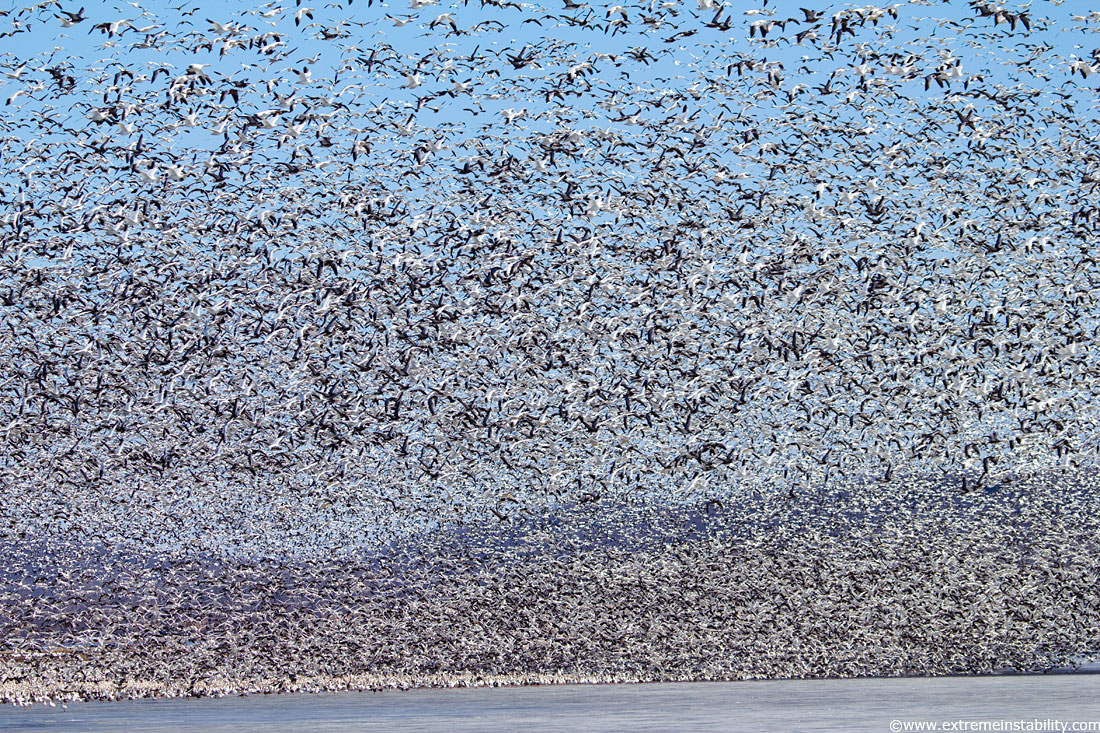 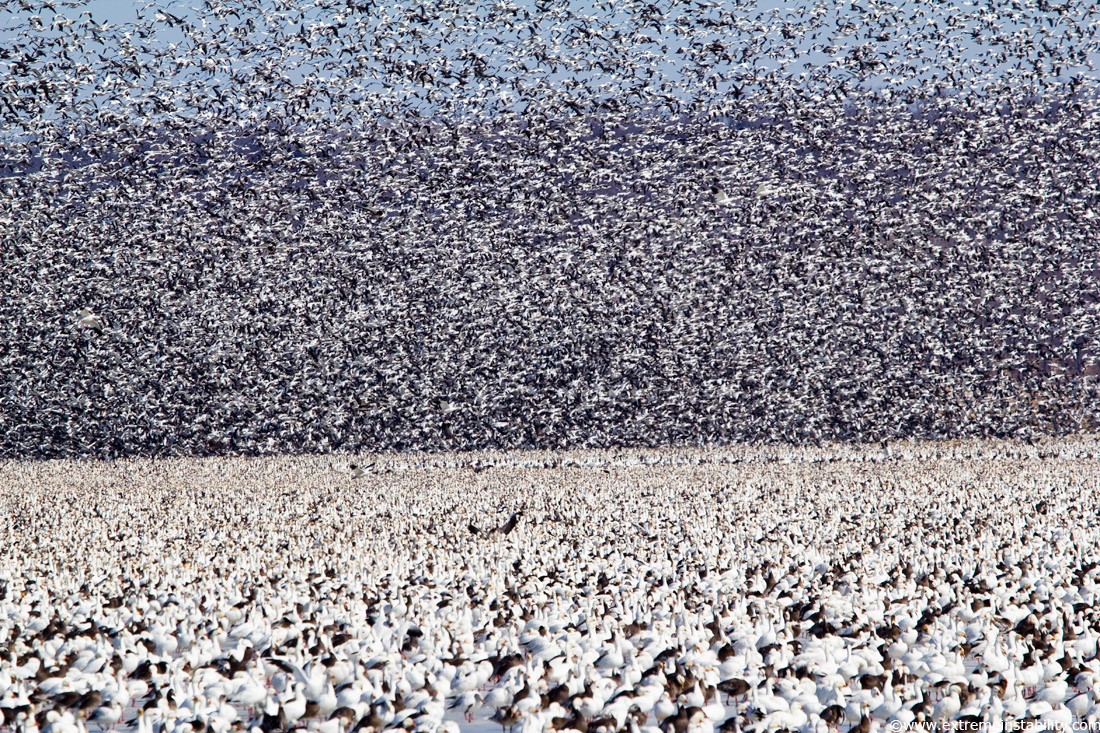 Tsunamis are really cool to watch. 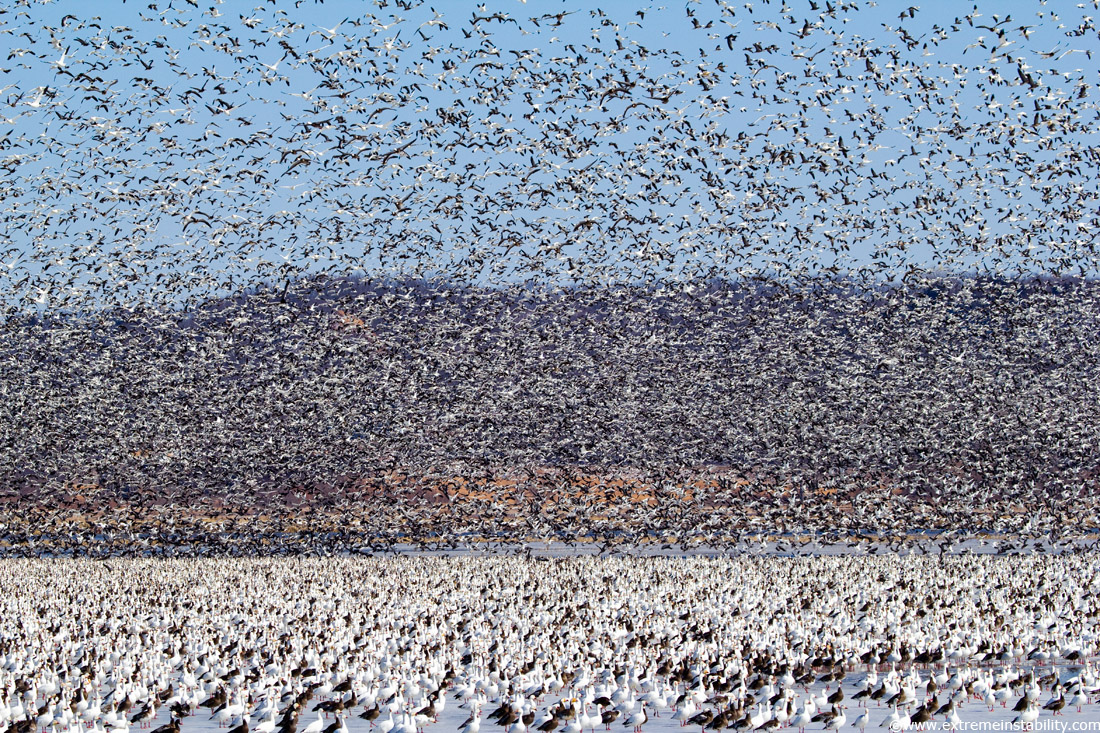 I went 3 days, 1st, 3rd, and 5th. I'm a lot happier with my group shots this time around, as I actually did them right. I was stopping way down, F11-F16 mostly and at least guestimating a hyperfocal distance. Way more crisp from close to far. Though I did slip up a few times and had it at F5.6. It's usually pointless to even do them at that. 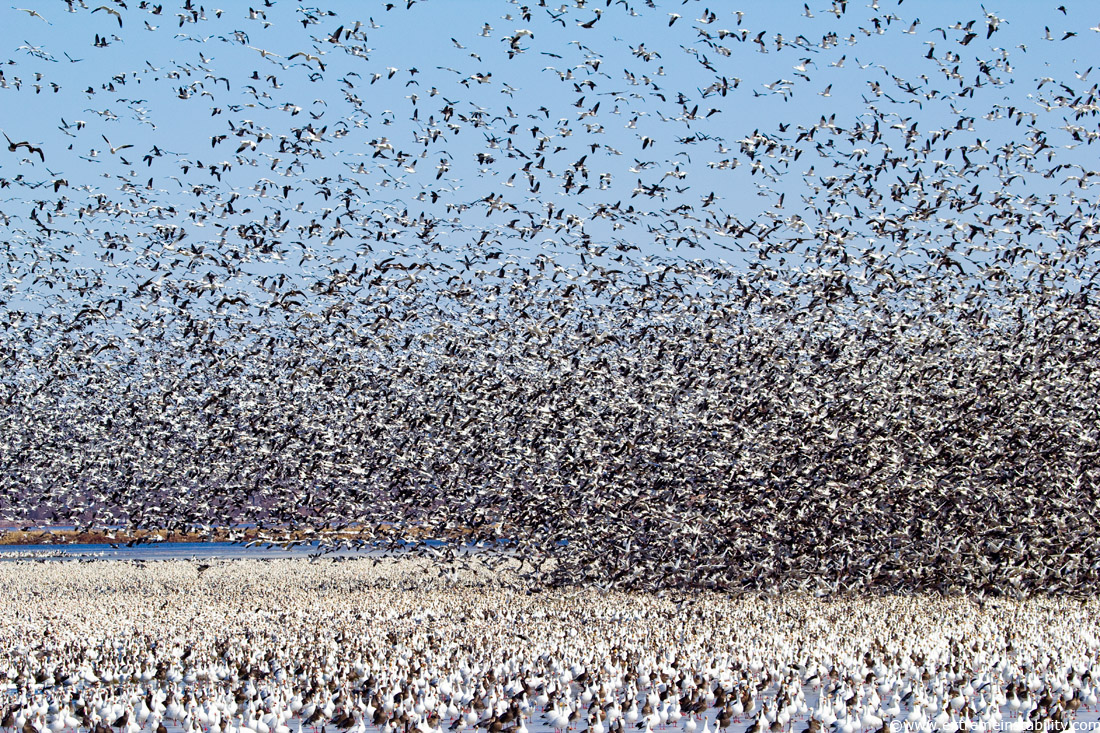 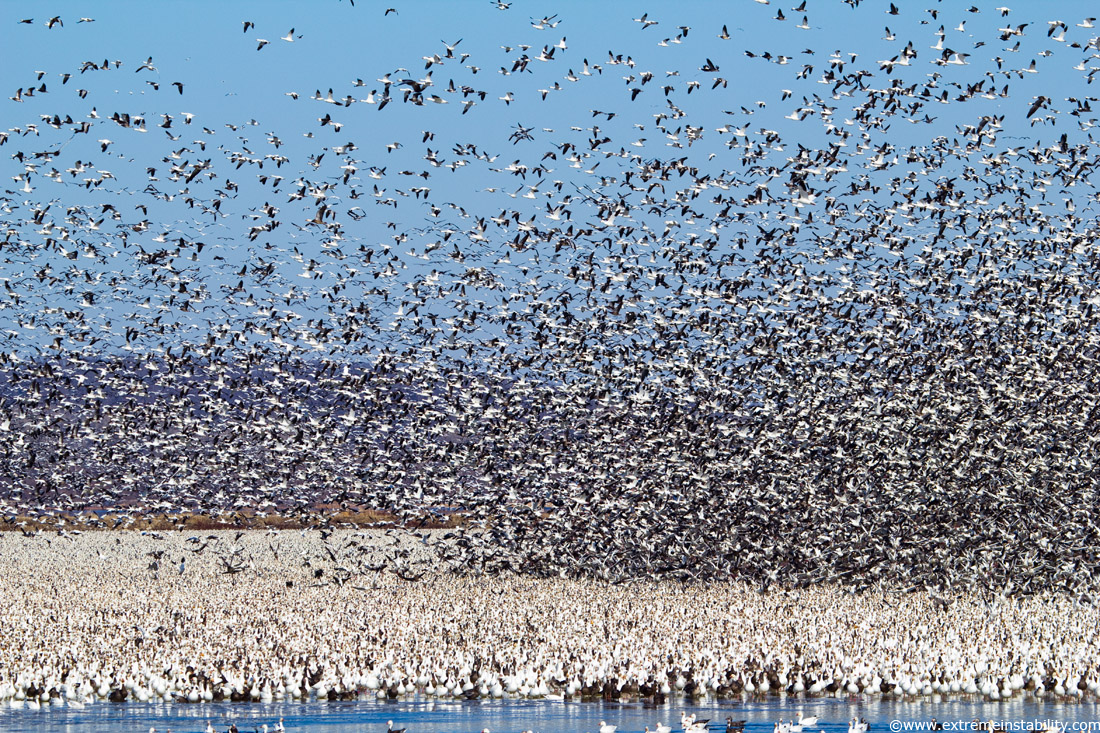 Geese leaving on the 3rd now. Evan and Chris came down this day, finally getting to see it when it is pretty damn full. If I had to guess I'd guess the 3rd matched the 1.2 million. The west pool had birds stretching end to end and was filled about 50% or more across. Then the north half of the east pool was jam packed. At the same time a large group was up in the northeast marsh area. 1.2 million in 2009 was a silly lotta birds, but I think if you put these all in the east pool like they were then, that it'd be damn similar. Not that they've posted a count after the February 28 775,000.

The geese love to start filling back in around 10 a.m. through noon, so we drove around before then. Stumbled upon 2 eagles on the road. We tried to sneak up but they flew off. We then find the fish they had. We thought we could hide there and they'd come back. After doing that for a bit we decided to save the fish, even if it seemed unlikely it would survive. I mean you can imagine the fish's thoughts, "why they staring at me, put me in the water!" It had two eagles on it though, I didn't figure there was point in putting it back in the water. I eventually did though and after about a half hour of slow breaths in the water it took off. That fish had a heck of a morning. Swimming along, minding his business when a bird takes him up to the road and starts to eat at him. Then photographers stare at him for a few minutes. Then he gets carried back to the water lol. I know damn good and well we just prolonged it for him and he got snatched back out later. 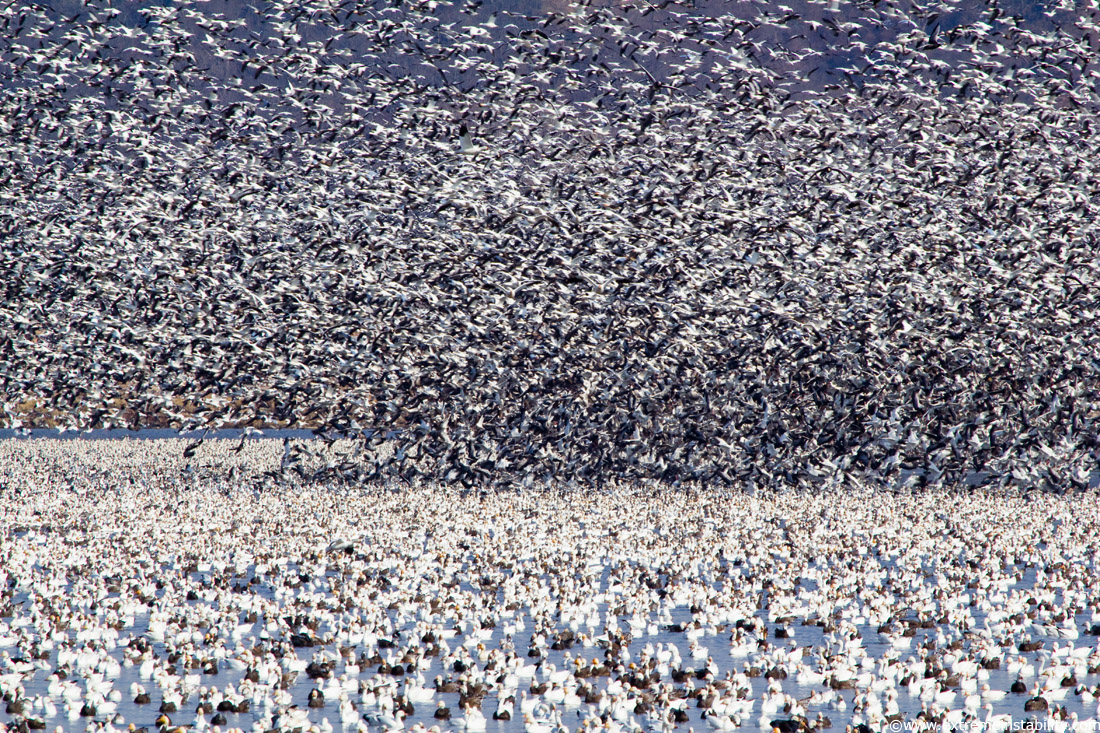 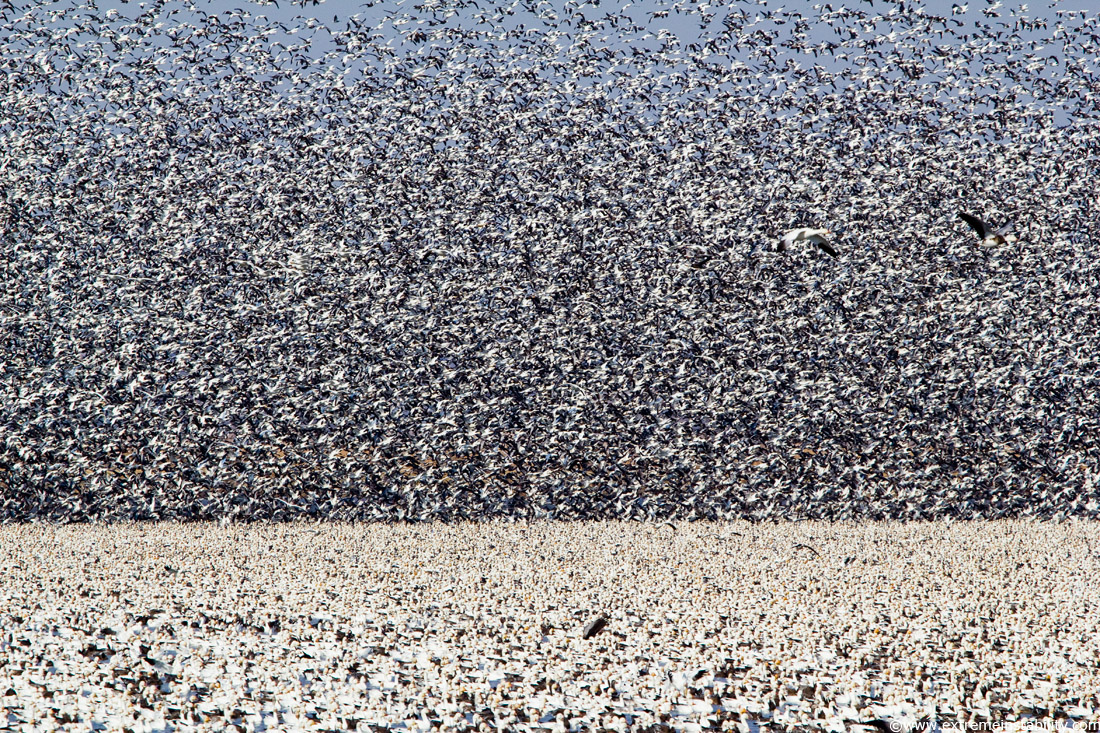 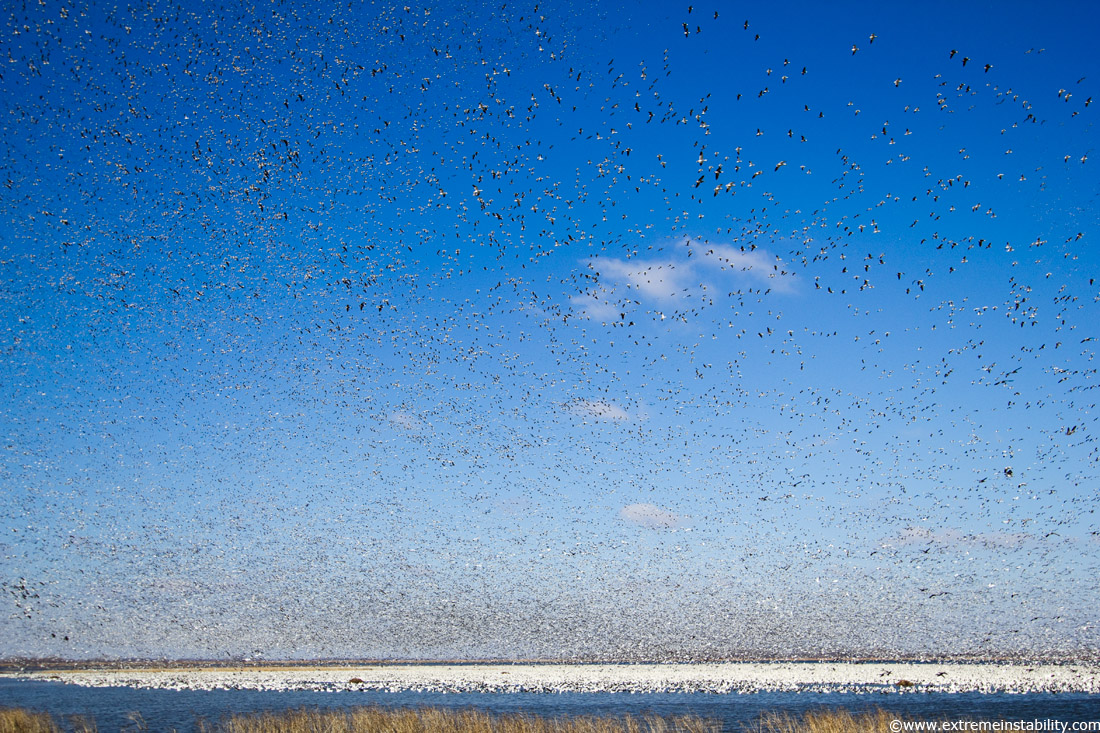 5th now, Tyler here this day. I got here around 10 or so and like clockwork they were filling back in. It's silly just how timely they are for their coming and goings. 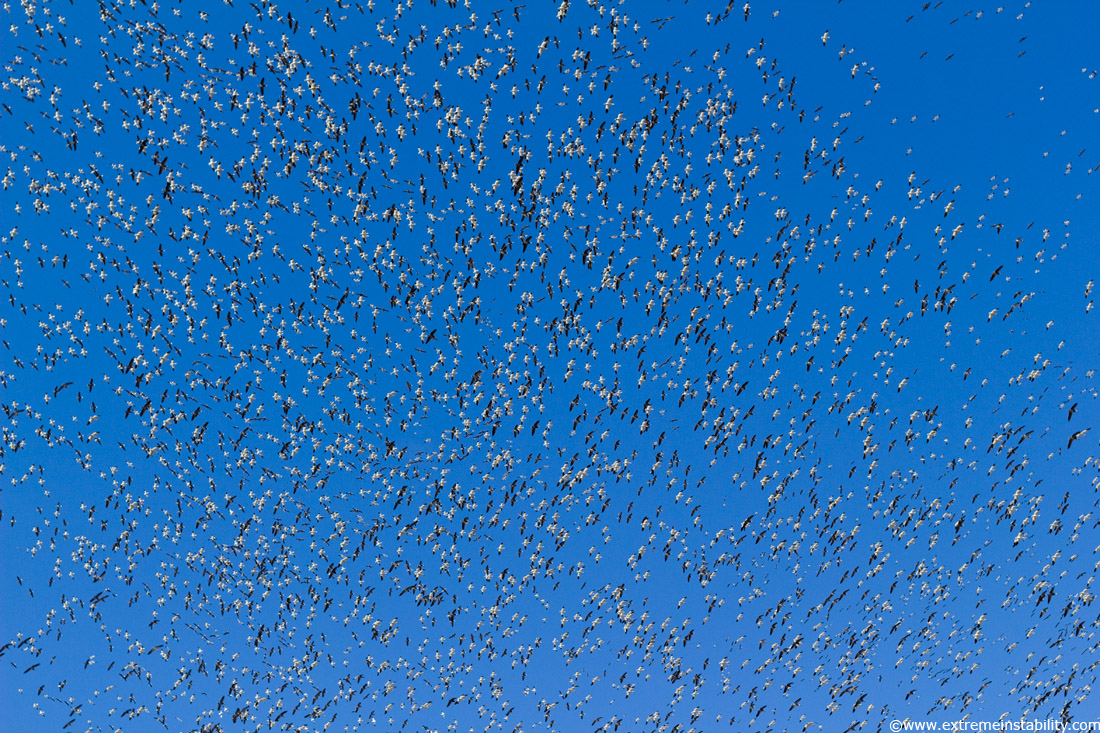 Poop advisory. So cool to be under the mass circling down on that pre-noon return, but it's easy to get poo'd on. 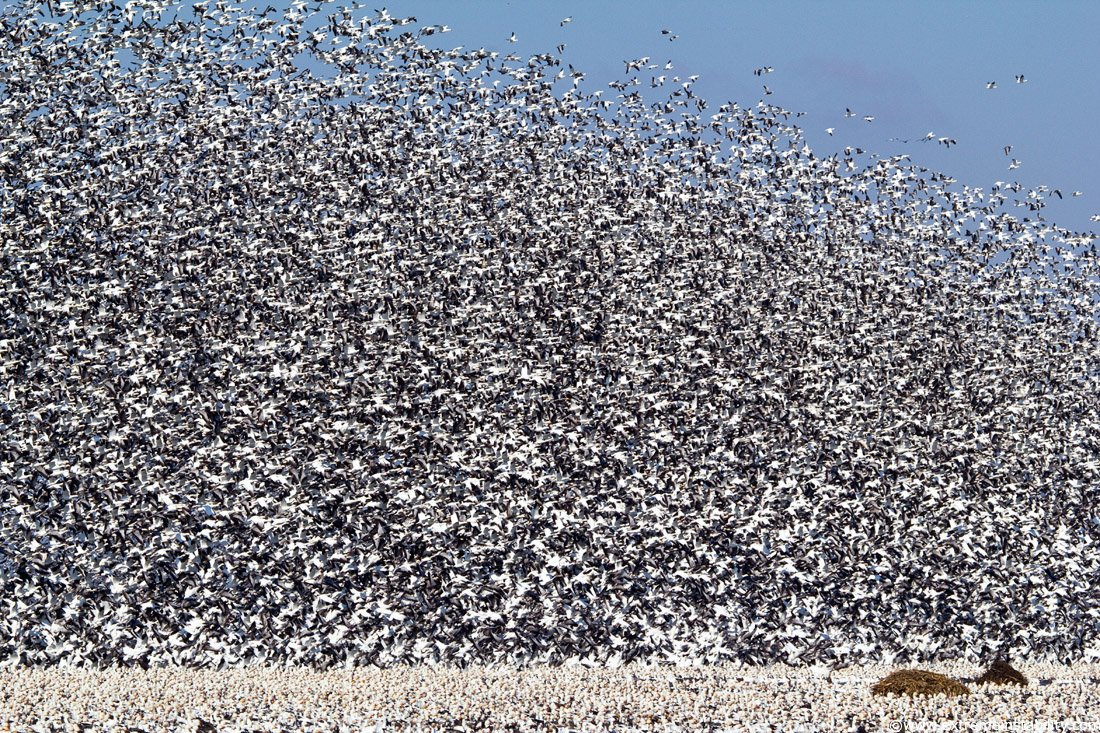 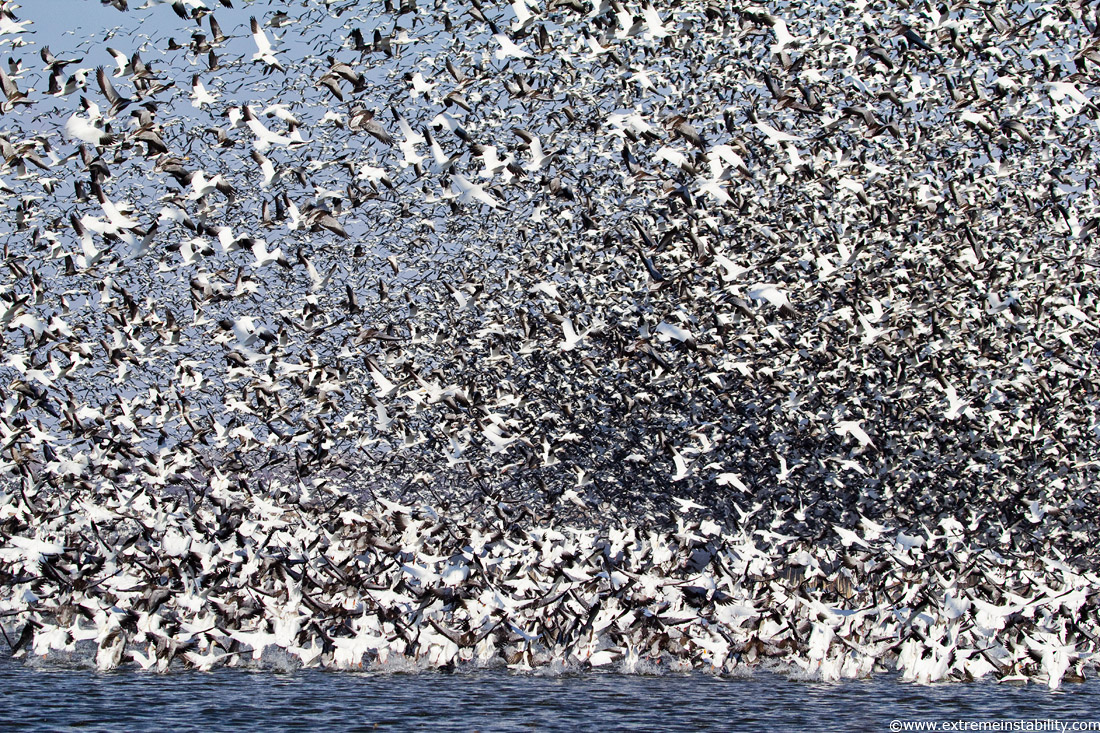 You can only take so many photos of vertical walls of geese. Then the trick becomes to mix it up and get even more chaos into one shot. This requires thick groups in different locations of the image. 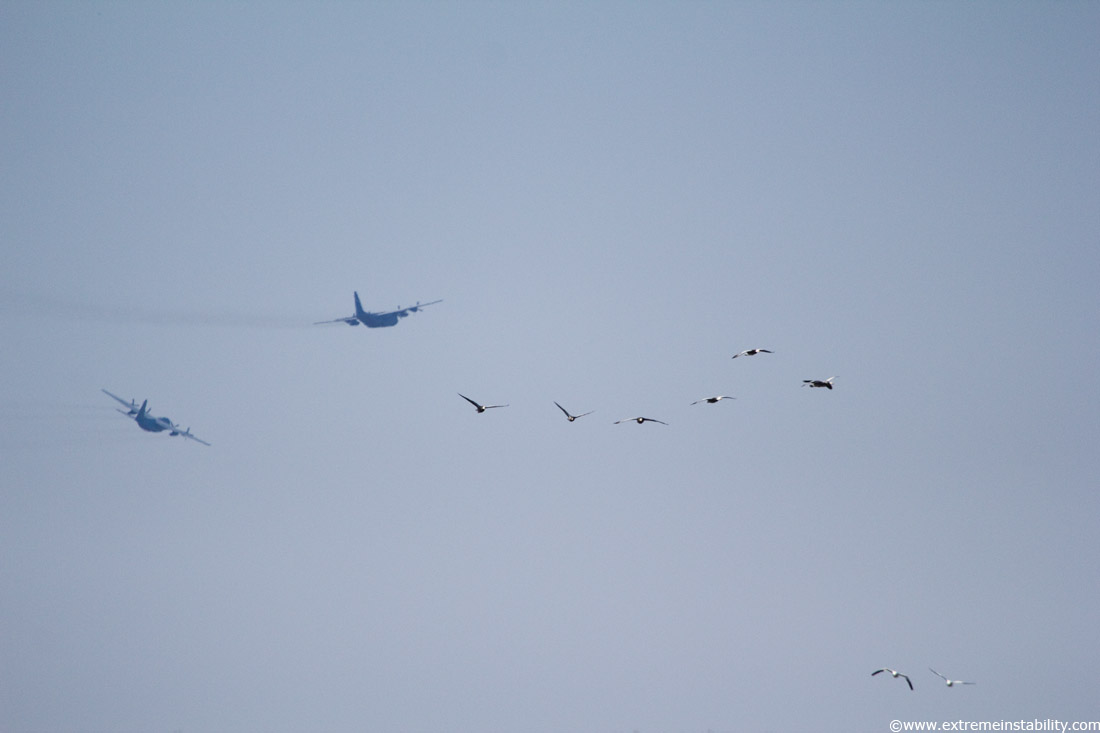 We were standing there shooting the geese when Tyler was like, "oh crap look". I turn around and these two large military planes were skimming the damn hill on the south side of the refuge. They were stupidly close. Took me a second to get things ready to shoot them. A third came in behind them. On the 1st I did get some shots of a Chinook with the geese. Guess I may as well post it. 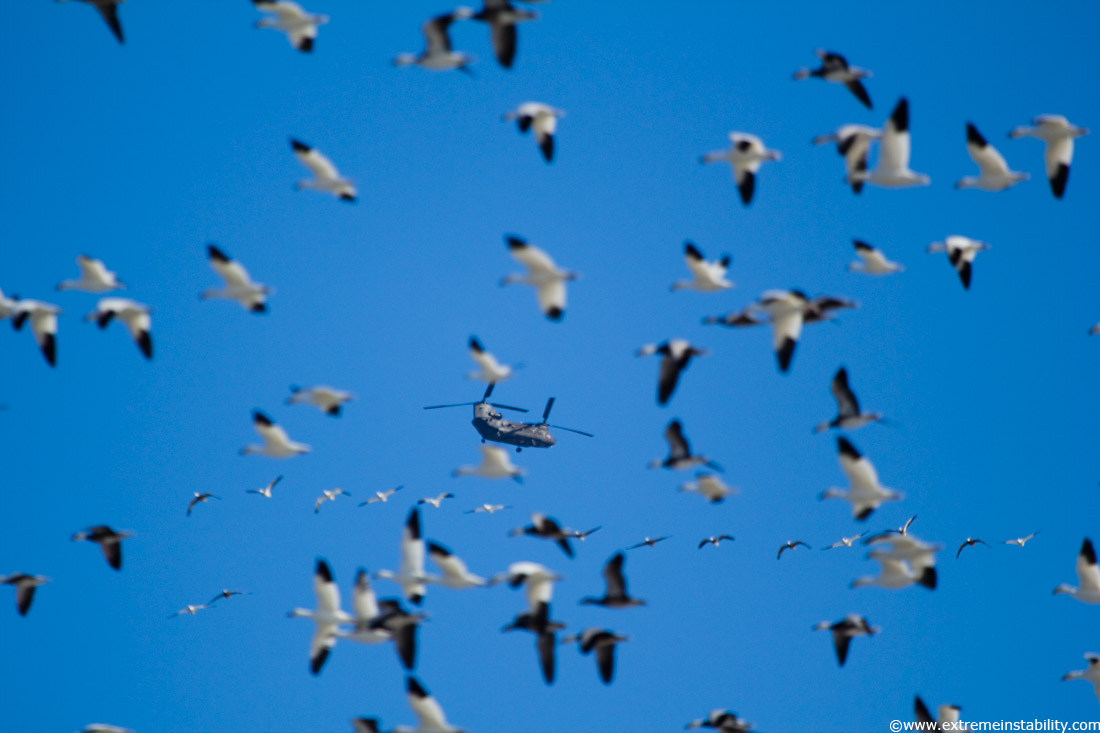 According to file numbering, I took well over 2,000 photos in 3 days. The biggest pain? Deleting those down to know what you even have. I wish I could put them on here at much larger resolutions, but yeah not going to happen. 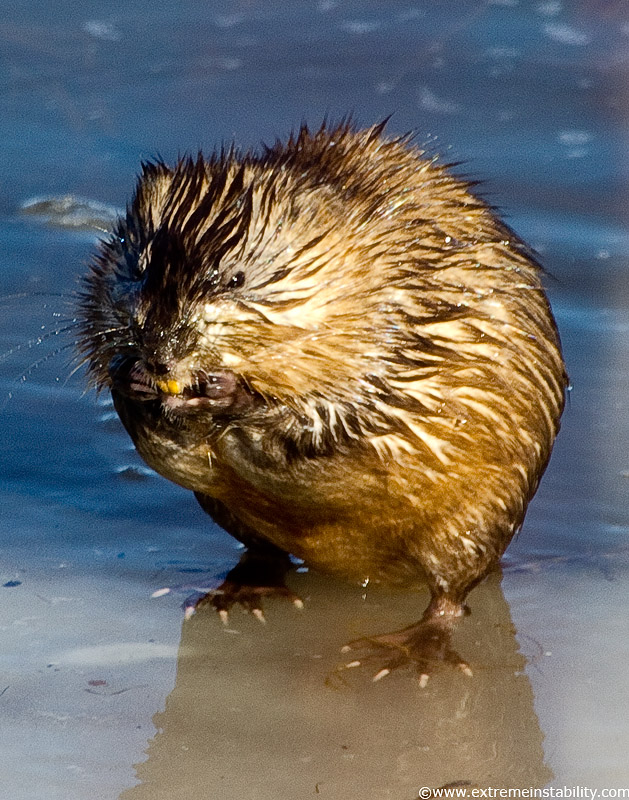 Oh yeah about forgot about my muskrat buddy making faces at me. Cropped in and had to try and save softness on this one.

Just as insane and trip worthy were the red-wing blackbird numbers. Probably 50 million of those in the area. No joke. The account of those can be seen HERE.