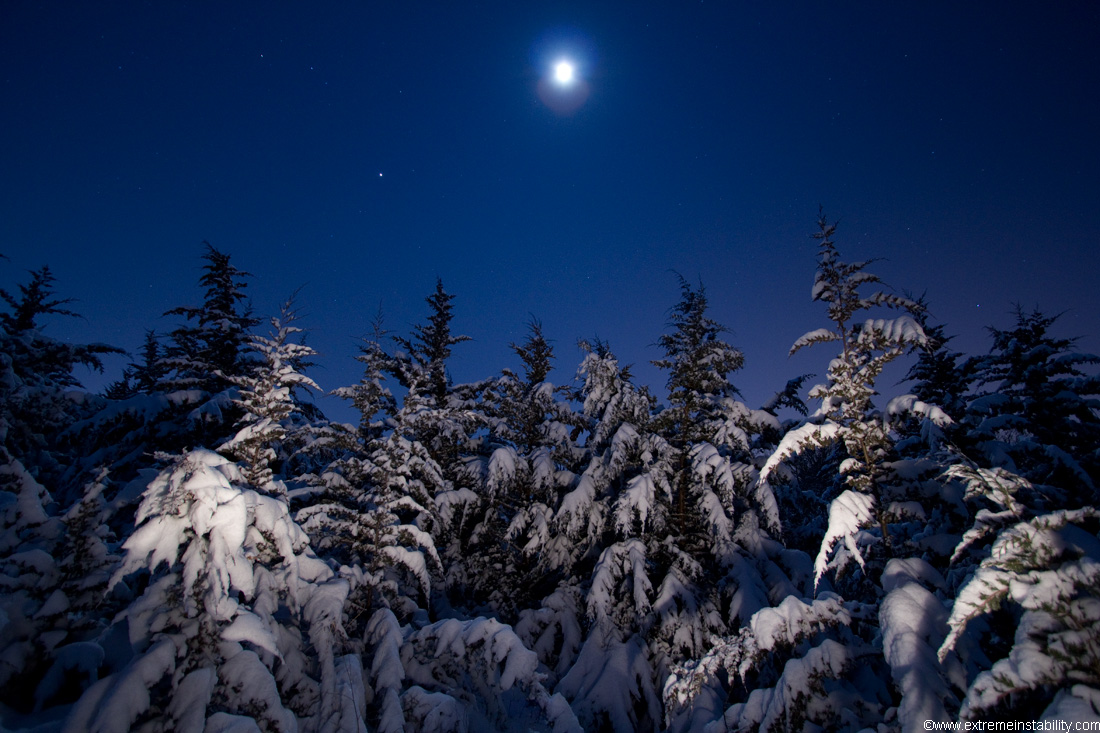 After the snow storm the other day, I noticed a cool area of trees in the hills behind my parent's place. Just caked with snow still. I then thought, hmmmm, I bet this area would rule at night with the moon. I'm mostly a wuss about going it alone at night anywhere, less so if the area is treeless, like some hill. But night, trees and me, um yeah never thought that would mix lol. Something just damn spooky about being alone in the trees at night. I didn't actually think I'd do it. Thought for sure I'd just wuss out and say screw that. It wasn't helping this exact spot was where a highly reliable mountain lion report happened, either last year or the one before. From my parent's neighbor who saw it two days and then later found it's deer kill area. Just a very knowledgeable and believable person. So as I waited for darkness and it began to kick in, I kept thinking about that lol. I'm like, yeah that will be my luck. And no matter what, at the minimum my brain would be wondering about it. Plus just the other day I'd watched a few youtube videos of deer kicking some ass.

I get to the edge of the light from my parent's and stopped. Seemed so dark any further into the trees. I was like, screw this and yup I'm totally chickening out as expected. The area I wanted to get to was probably half a mile walk in there and I was already stuck on the edge of the yard lol. I then decided to just go into the darkness. Not far in it was clear how silly I was being. Once out of that house light I could tell it wasn't a hell of a lot different than day, which I'd figured but evidently not as much as it was. Wasn't spooky at all.

I was there for a while, buried in these pine trees when something could be heard walking through on the other side of them. What I've learned from being out at night on Murray Hill alone(no trees there) is that deer, etc, do not spook off at night. They will rustle through stuff near you and not give a damn if you cough or make noises trying to get them to go away. And this was no different. I'm like, go away already lol. Then another came through not long after. You don't see anything, but clearly hear them walking near you.

It was so neat in there after that. Soon many V's of snow geese could be seen flying south in the moon light. They looked ghostly white up there, honking away. Oh yeah it was damn cold out. Headed into single digits damn early. 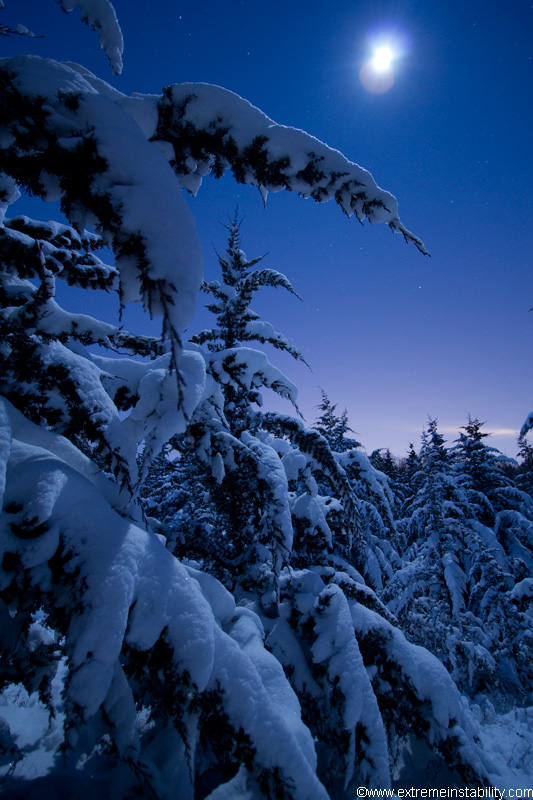 So anyway, yeah lots of cool photo ops. Dead calm too and at times deafeningly quiet. 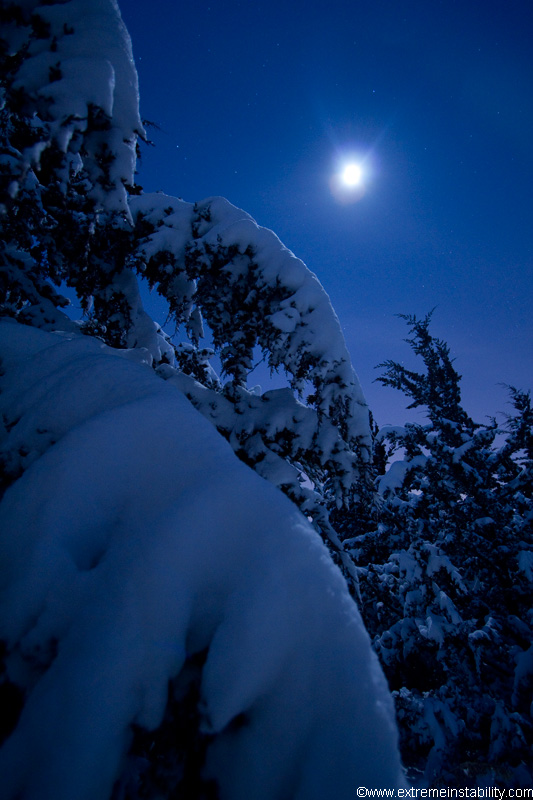 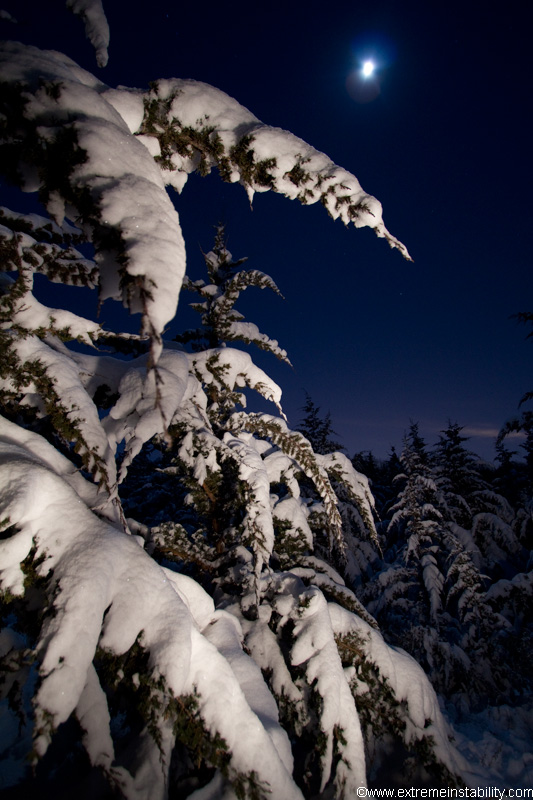 I didn't use the flashlight a whole lot. I think that is probably better for nights with no moon. 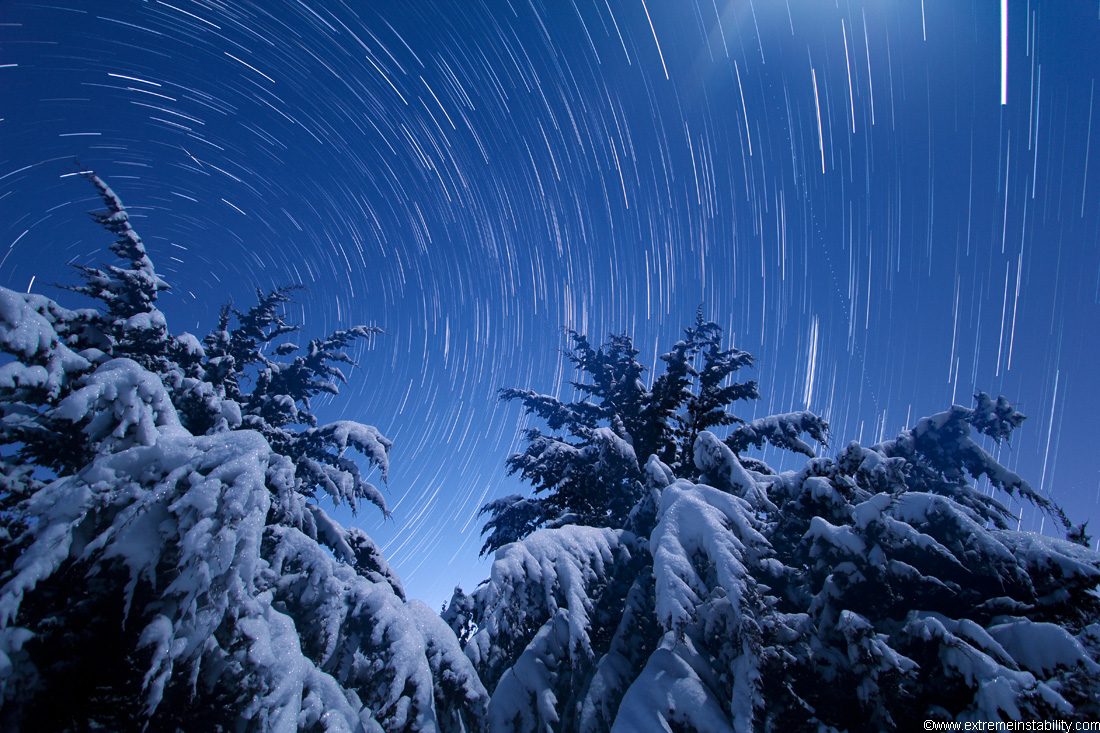 Check out the iridium flare in the upper left. These star trail shots are stacked images from many 20-30 second shutters, so that is why the flare has that gap in it. It was between frames. 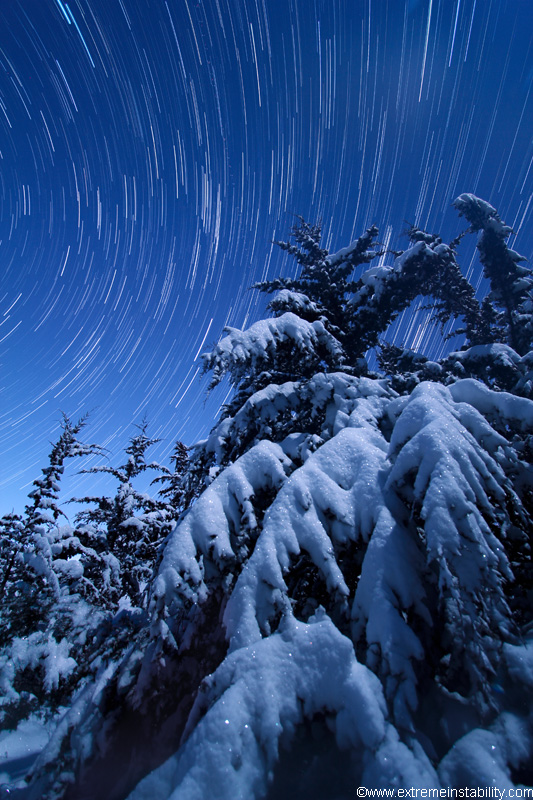 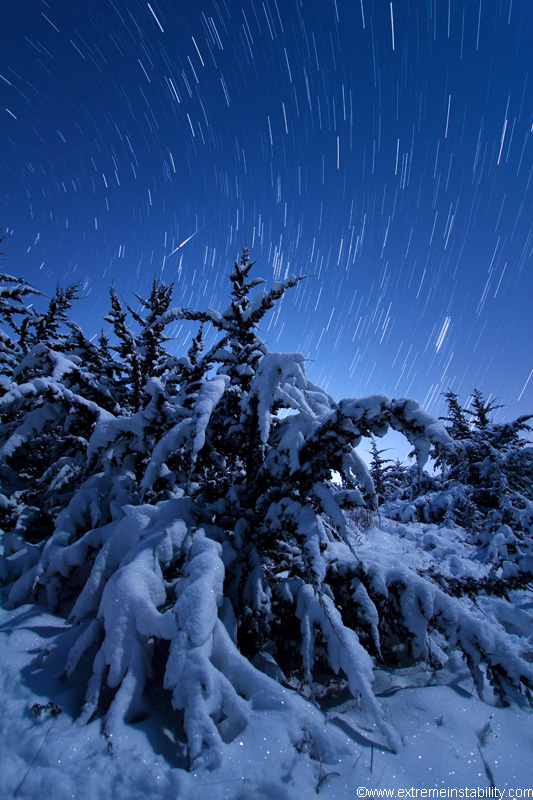 Yet another iridium flare(bright satellites). 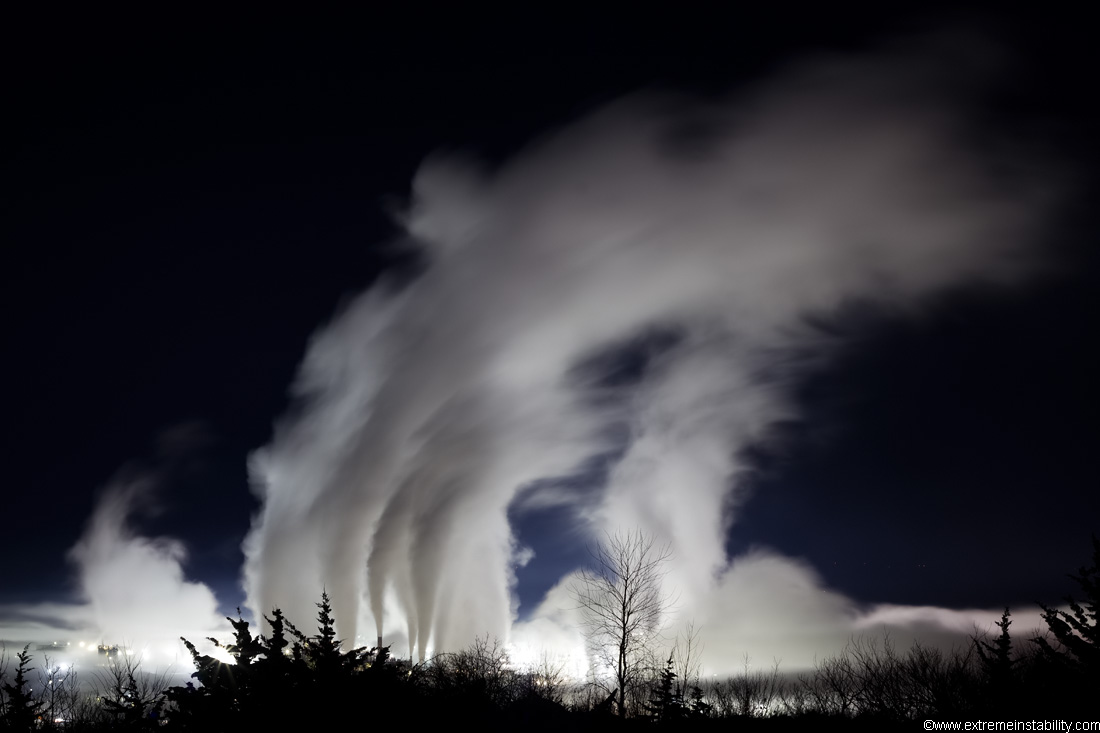 After about 3 hours out in the arctic air, I had enough and was getting distracted by low fog around Cargil. 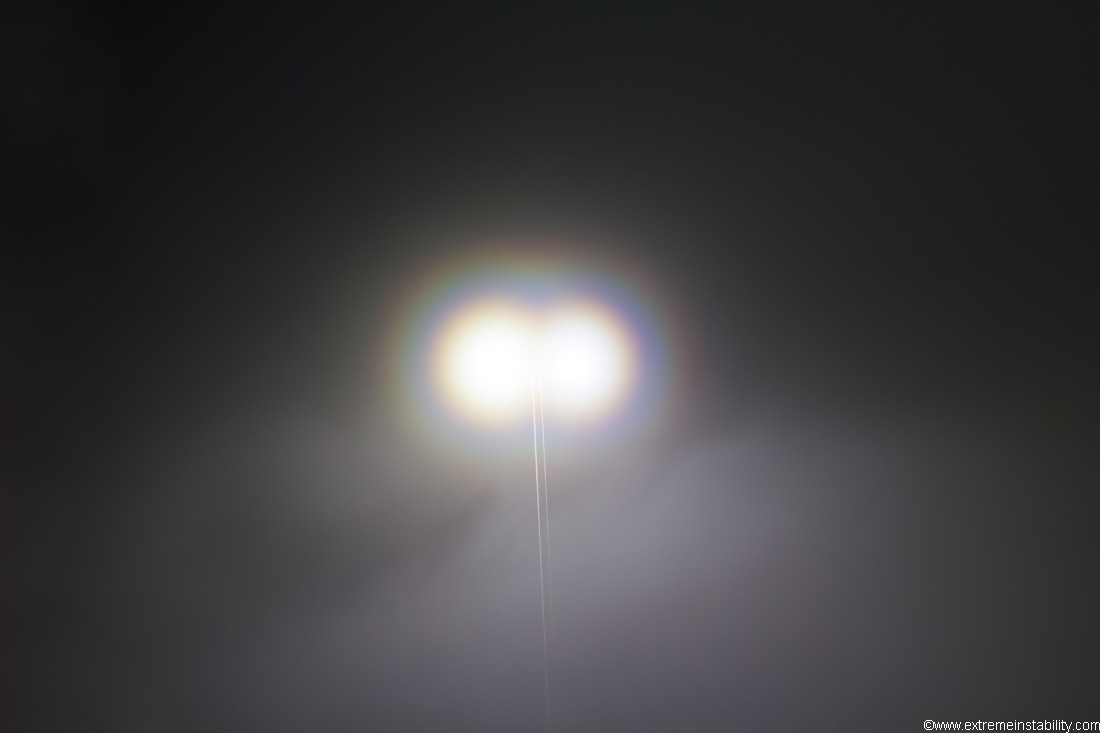 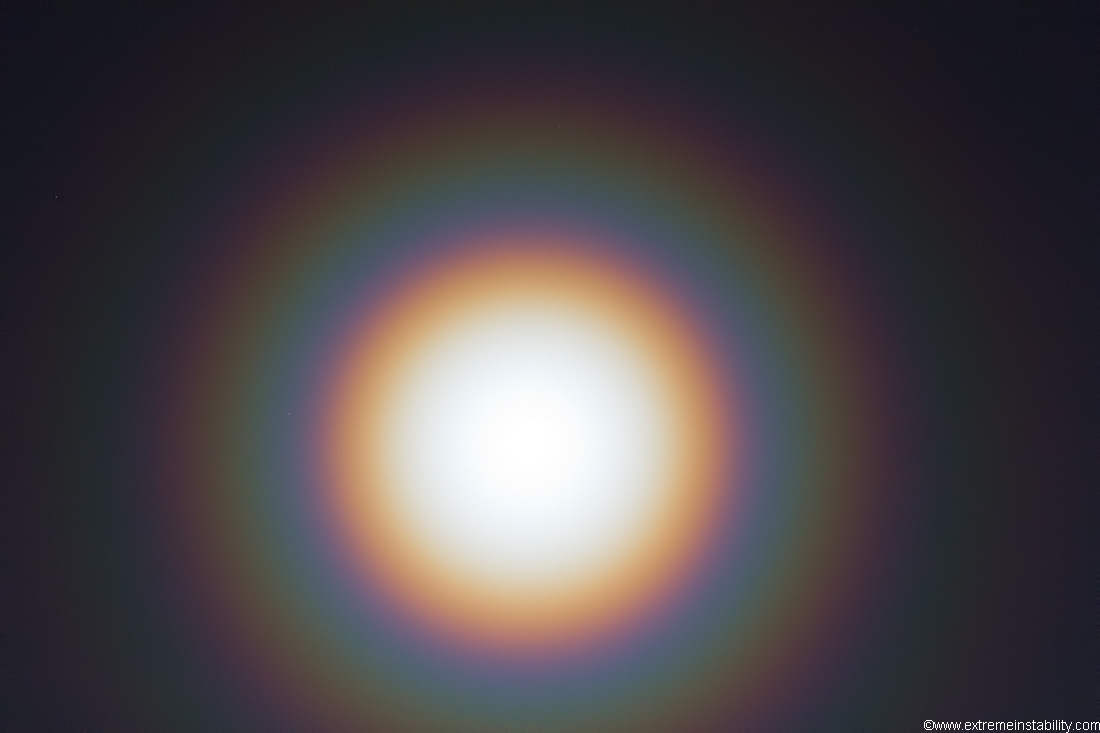 I finally forced myself to drive across the river instead of going home. Dense freezing fog in the flats over there and highly vivid lunar coronas. 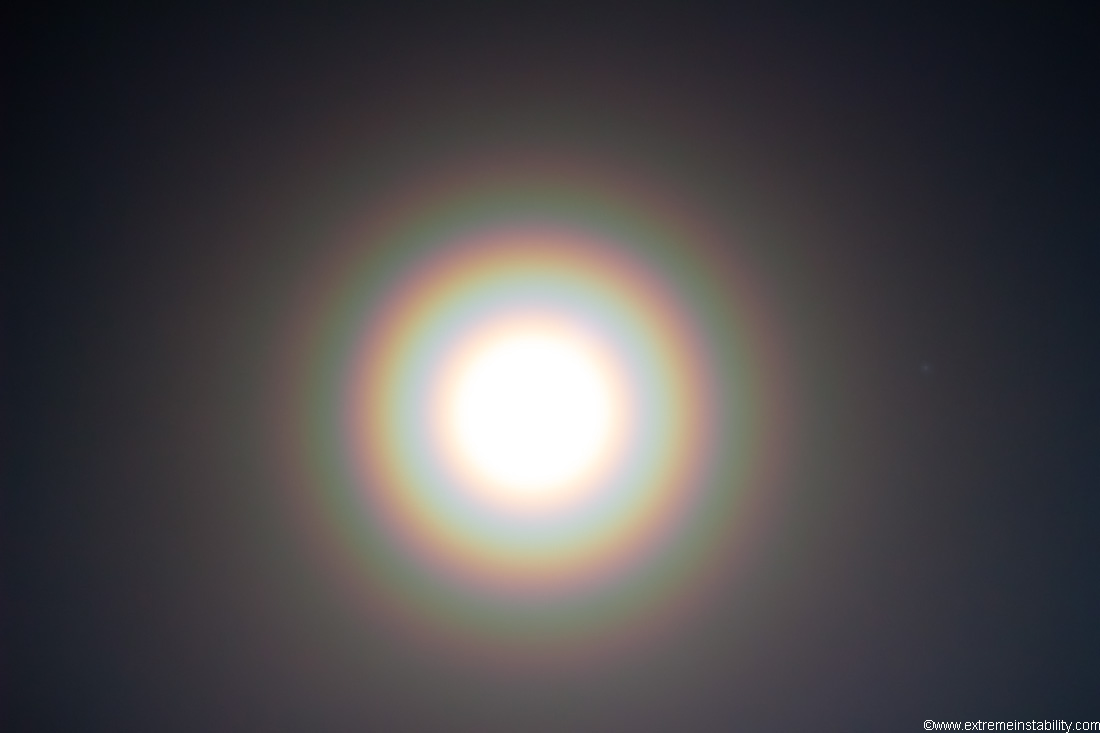 Get the right fog thickness and they will go nuts. 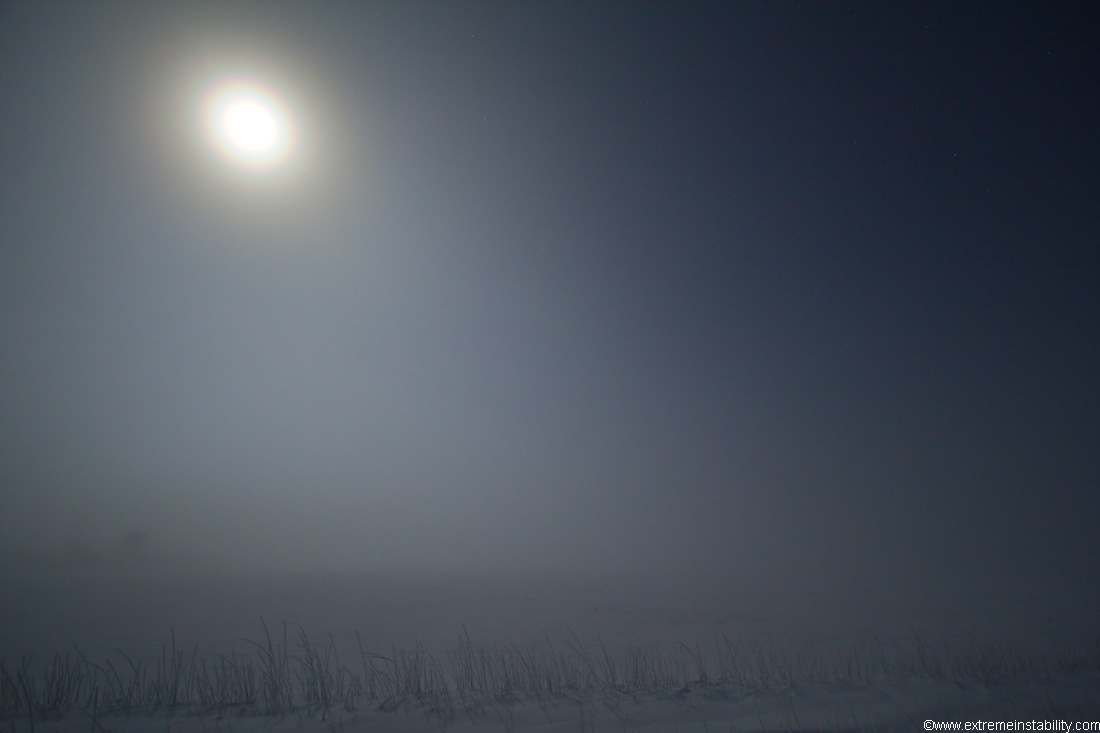 A little below 0F over here. The cold was bugging me more and more. I'm always trying to get moon-lit sea'd out low fog from a hill over here and I know I blew it on this one. I knew the cold front was about here and would ruin the fog, so I didn't make the half hour drive north to the hill. I should have been over here hours ago and gotten that damn op because I could tell it was freaking perfect for it. From Blair to Missouri Valley was consistent dense freezing fog, but you could see the moon and stars above it. Blew it, sigh. If you shut off your car lights in dense fog the visibility seems far better. Like these shots may not seem dense, but drive down the highway and it becomes clear how dense it was. 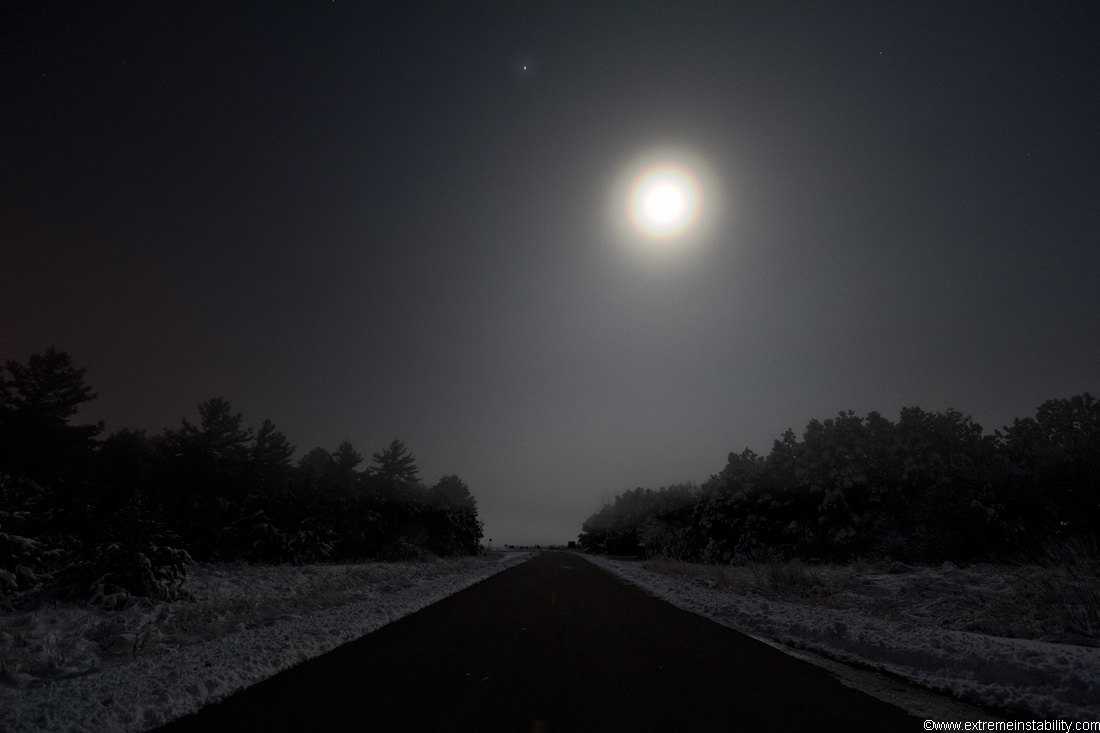 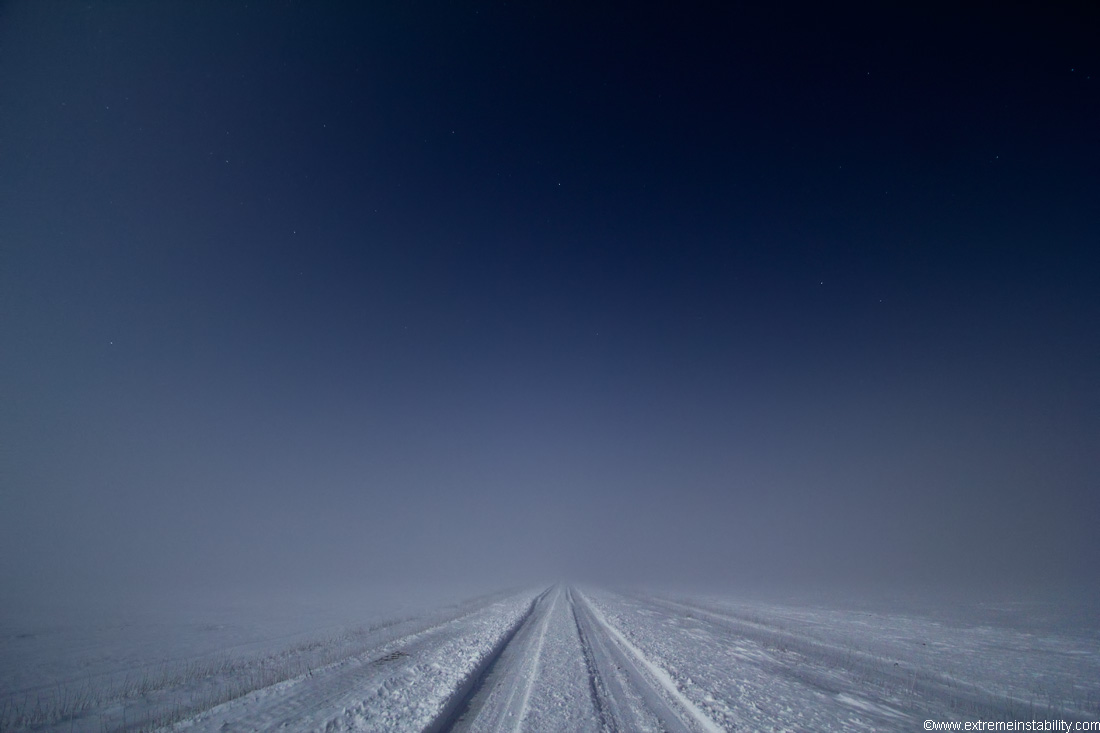 Kinda cool road into murk shot with black night above. 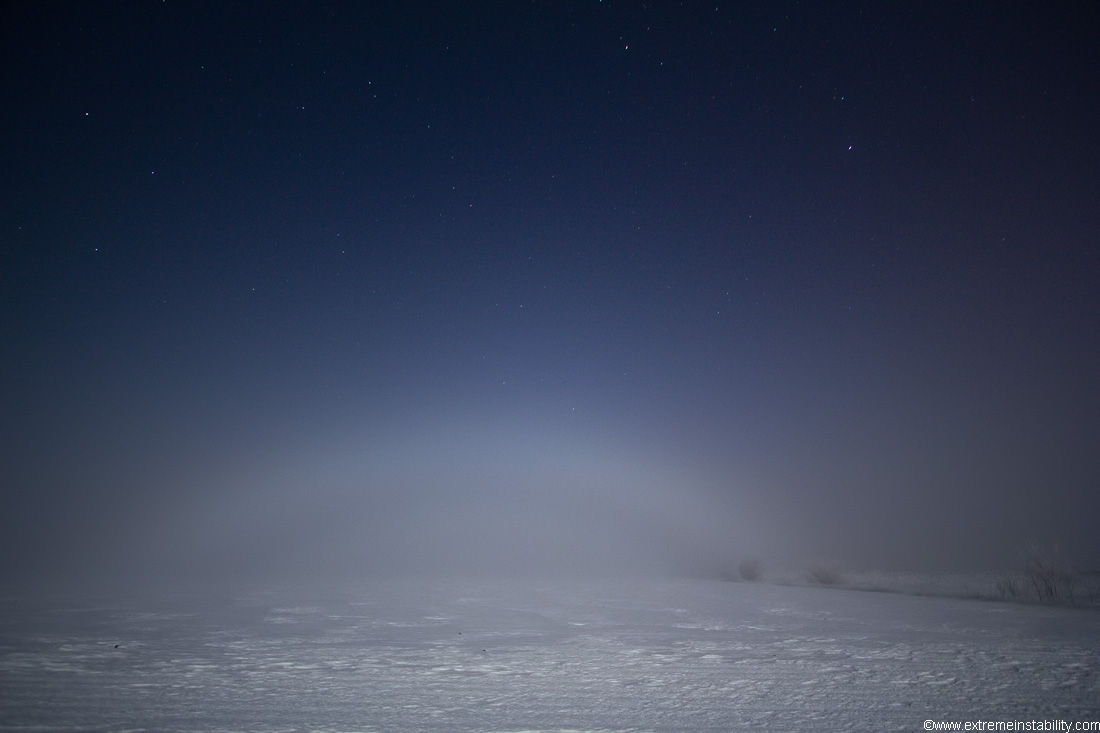 Lunar fogbow which I was waiting for. I then waited another hour for it to get better as the moon lowered but it never got intense. 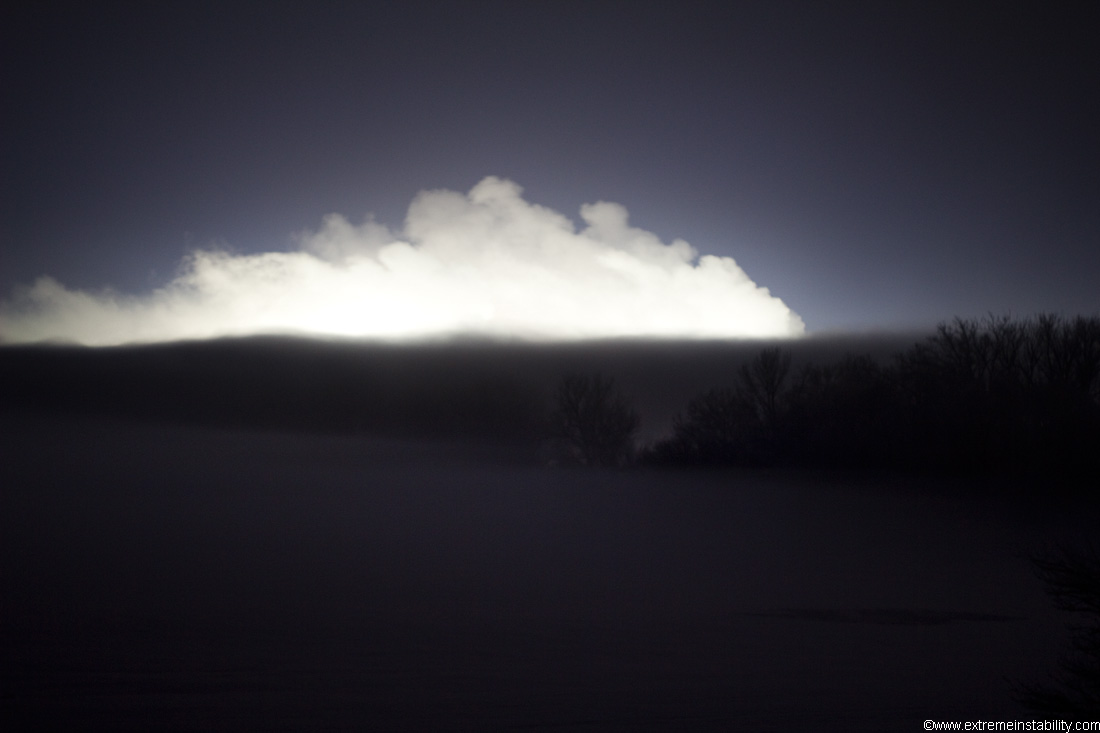 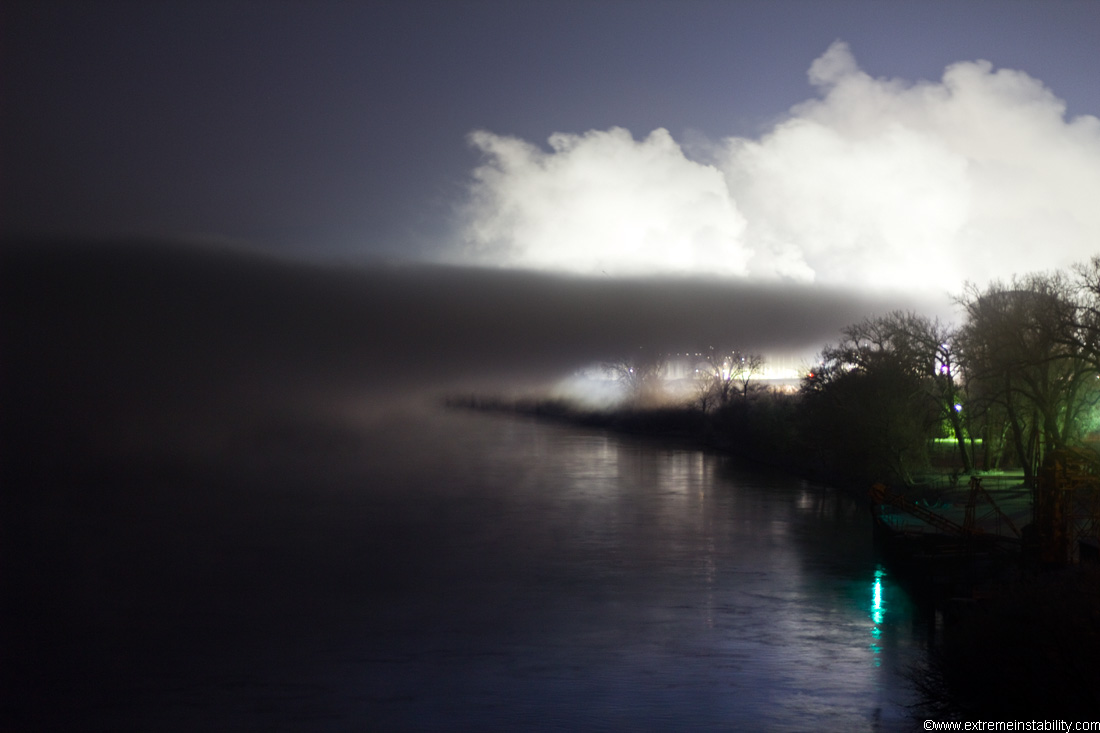 It was around 2:30 a.m. now so took a quick shot on the bridge. It will often look really crazy from up here with steam and fog. Went home and crashed finally, after being out since 6pm. The rest of the stuff is from 2 nights later. 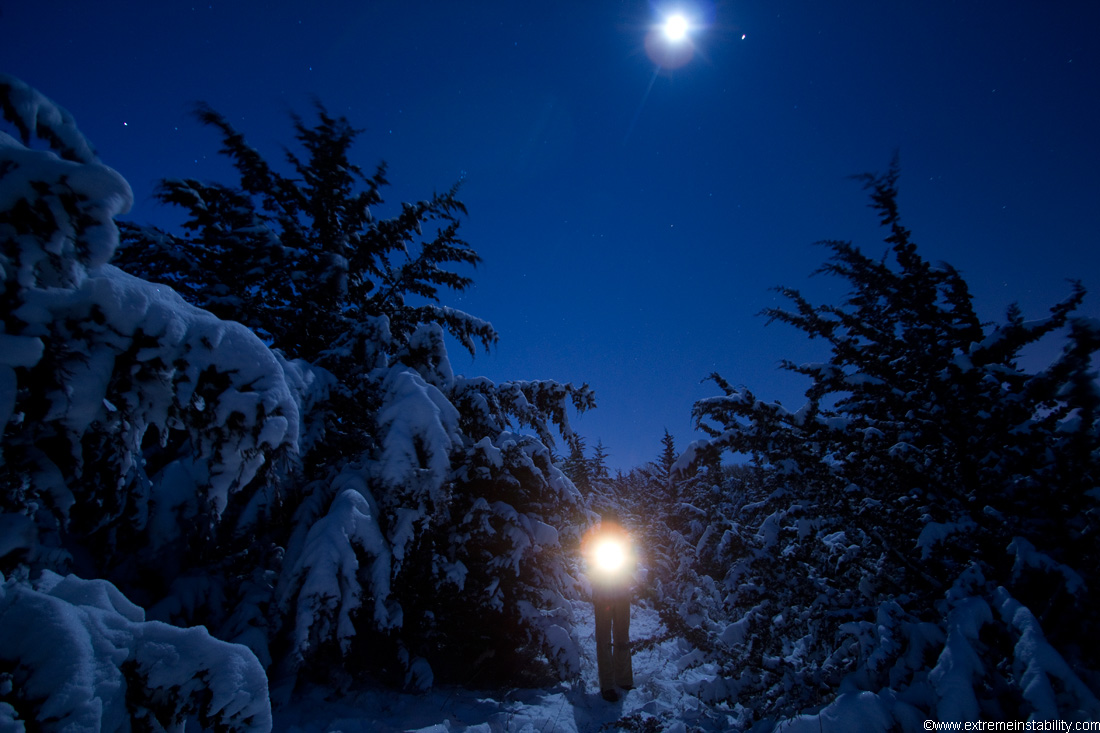 This is the 6th now. The night of the 4th that I did this first, I lost the flashlight in the snow right before I was ready to use it. I did a few star trails then lost the light before I could use it for stuff. So since it was clear again and snow still not blown off trees and I had the moon, figured I better hop on the op again. It was cold the first time but this was even worse. It was single digits at sunset but this time it wasn't dead calm but freaking breezy. It was horrible out.

At least 90% of the times I'm out shooting things at night it is over in IA in the flat open country. I always hear coyotes there. Often quite freaky and numerous. I'd never heard them from my parent's. Course I'm seldom there at night I guess or outside at night there. Given the hills are pretty loaded with houses south of Blair, least compared to flats of IA, I didn't figure there would be much in the way of coyotes and never expected to hear any. Then all the sudden a lone long howl on the nearby hill. Then he did it again. Then the whole pack chimed in finally. I though, oh crap, flip the camera dial to video and try to get audio of this. I never remember to do that when I have encounters. I wish I had done it right with the first howl, because the first part of them yapping that I missed was even louder and more crazy. Anyway, figured I'd put the clip of them on here. The light in the video is the moon. The camera is basically where the above image was taken. They didn't really spook me out this time. For one you could at least see. The one night at Murray Hill, it felt like the one was about to jump on me as I ran down in 100% darkness alone(not exaggerating). They were 10 times closer that time. That deal sucked lol. This was just cool this time. 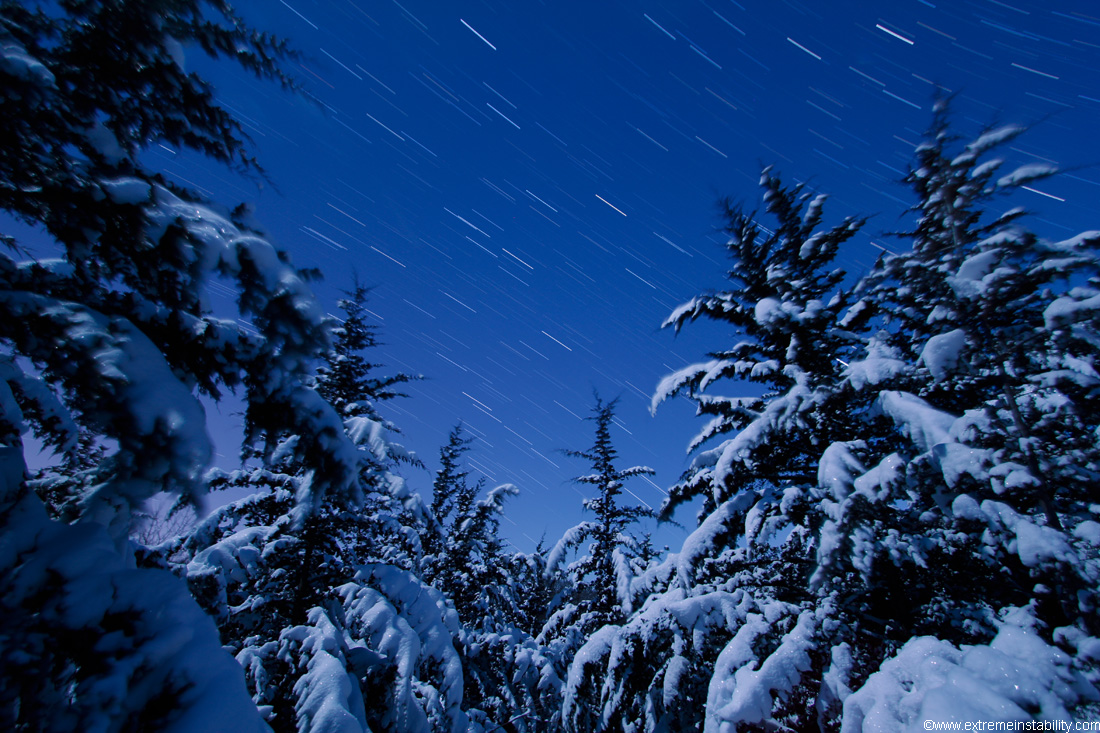 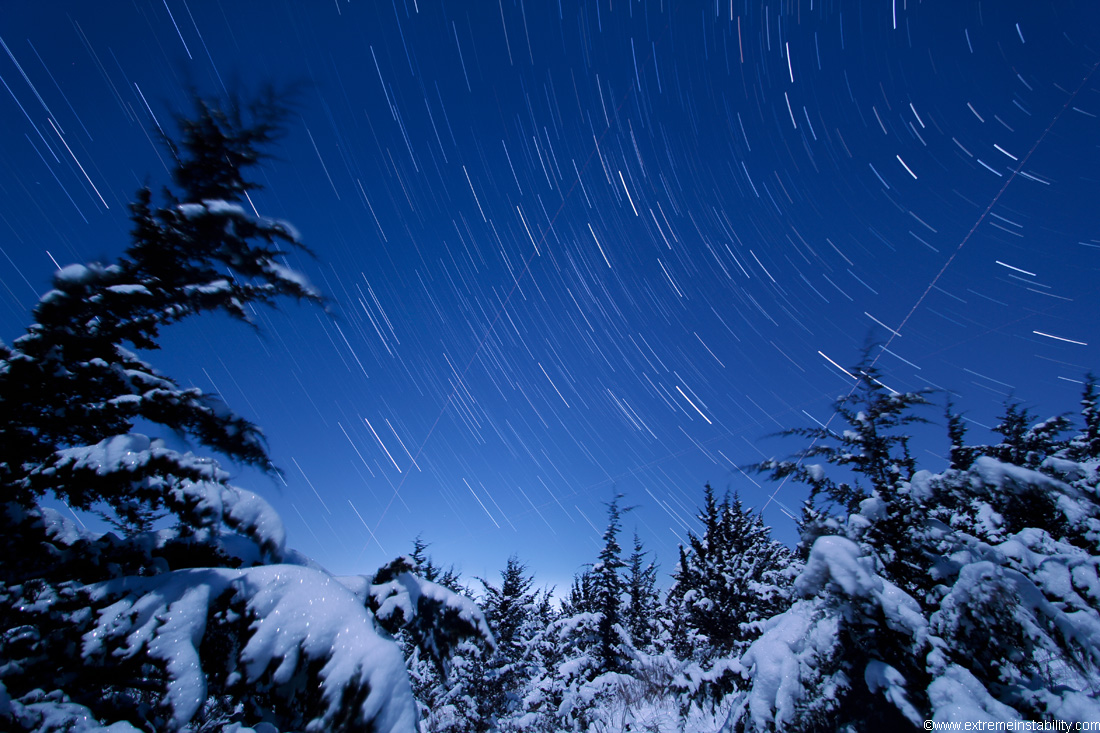 The thing that stood out this night was just how uninspired being cold as hell makes you. I'd do a star trail and get comfortable standing there as long as I didn't move at all. If you moved then you'd just rub parts of clothing that were cold. Hard to explain I guess. Much like if you don't use your heat much at home and use blankets. You get it nice right where you are in there but move outside that zone at all and hello. And over time that cold gets into your core and just gets you. You may keep your hands, fingers, and toes from becoming painfully cold, but nothing is stopping that core deal. I've done that before where you get in a car, blast the furnace and have a hard time getting rid of it. Your face will feel on fire but you are freezing inside. Then each time you go back out you get cold quicker and quicker. 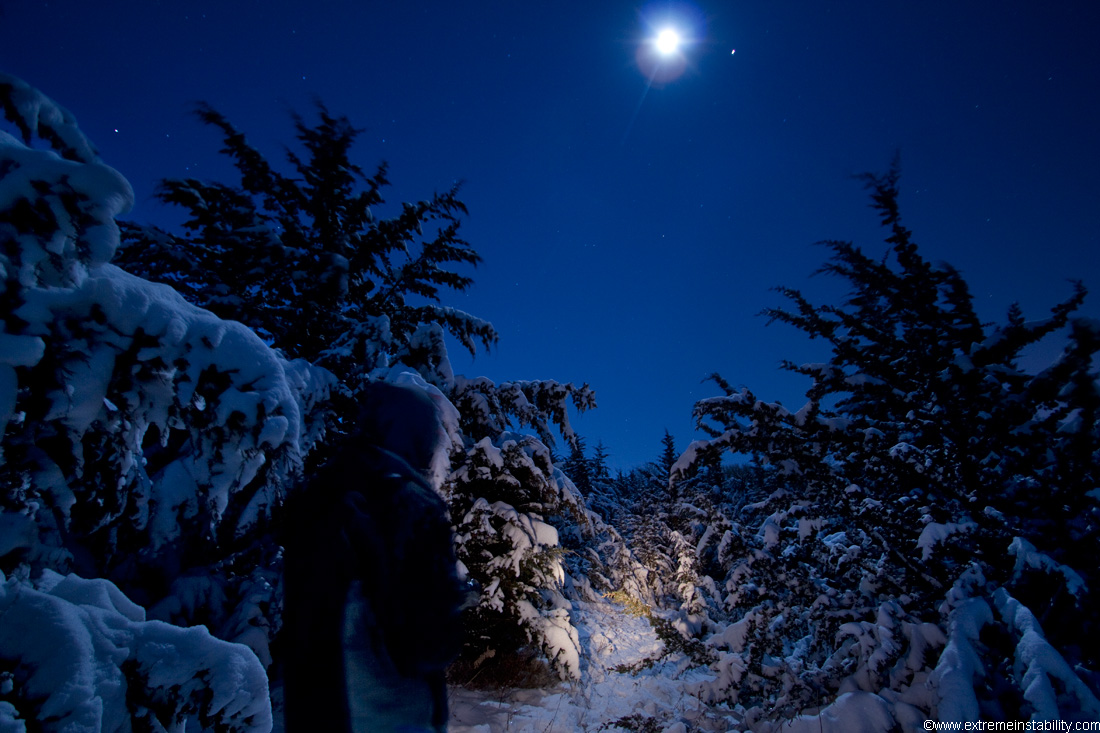 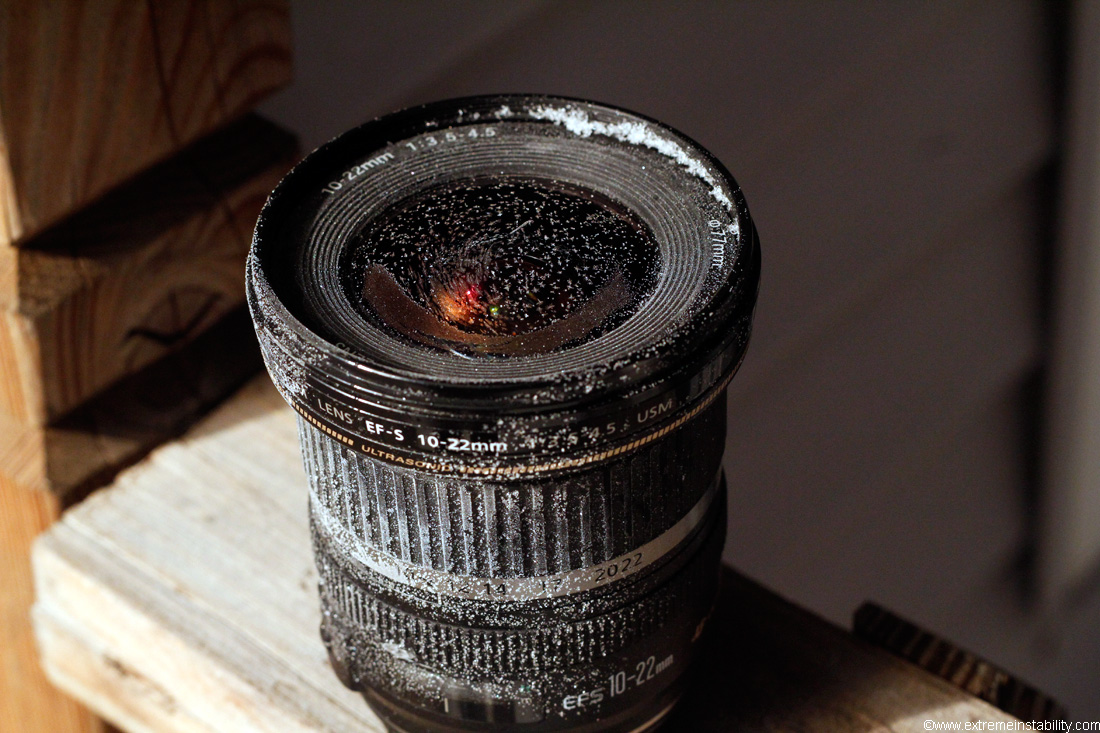 Not snow on the lens, except a small amount laying in the lip of it there that blew off the trees. The rest is frost. That is saying something because it was actually windy out. It's easier to do that when calm and bitter. It was solidly brutal out this time. You know you are in that realm when you get that nose hair freeze deal. You breath in and that happens in the nose. But then toss in the damn south wind. I could have handled it a bit longer without the wind. As it was, I made it a bit over 2 hours standing out there in it. I wear my glasses now more than contacts. It's kinda difficult to do this with glasses, because a face mask is pretty much a requirement. But wear that and breath and then you can't see. Kinda have to always blow out through the mask harder, so it clears your face more. That alone was getting old.