I got a total of 11 different arcs this day. Of those 11 I've only seen 4 of them before. I've seen other optics, but today I saw 7 new ones. That is kinda crazy.

Parhelic Circle - evidently this isn't rare but it's not overly common either.

Sun dogs aka Parhelia - most everyone has seen these before

120 degree Parhelia - a sun dog far out on the parhelic circle.

I gather the last few here are very rare. I have most of the images on here labeled. It's all mixed up basically. Just because I didn't label it on an image doesn't mean I don't see it is there. 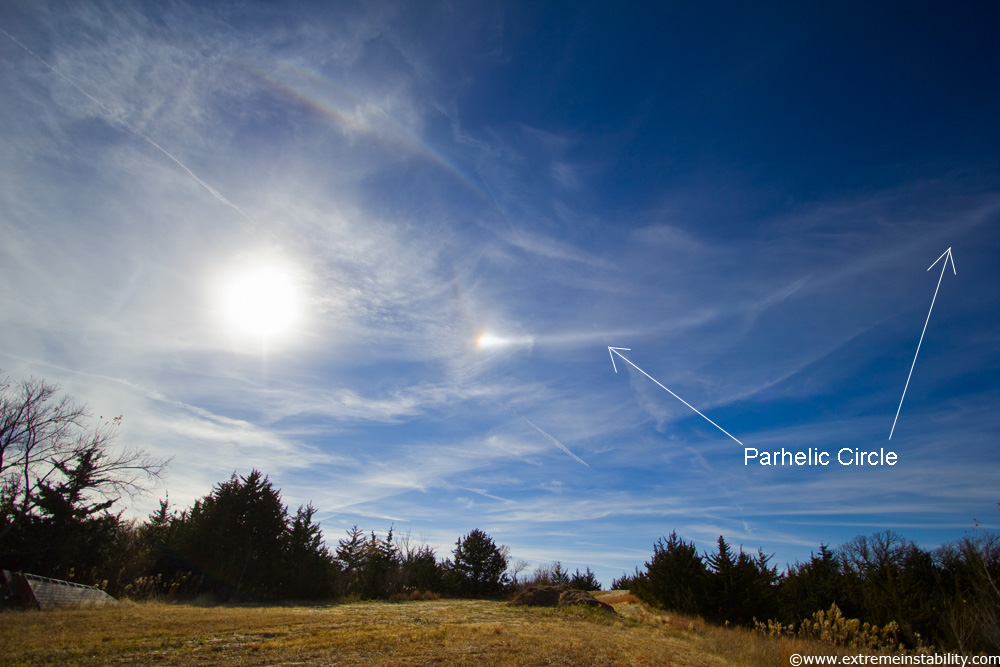 Stumbled onto this scene this afternoon. For 30 to 60 minutes I got to have a blast seeing optics I'd never seen before. First would be the Parhelic Circle. I've seen it start a bit next to a sun dog but never actually seen it extend out. Basically it goes through the sun, through the sun dogs, then around most of the entire sky in a line the same elevation as the Sun. 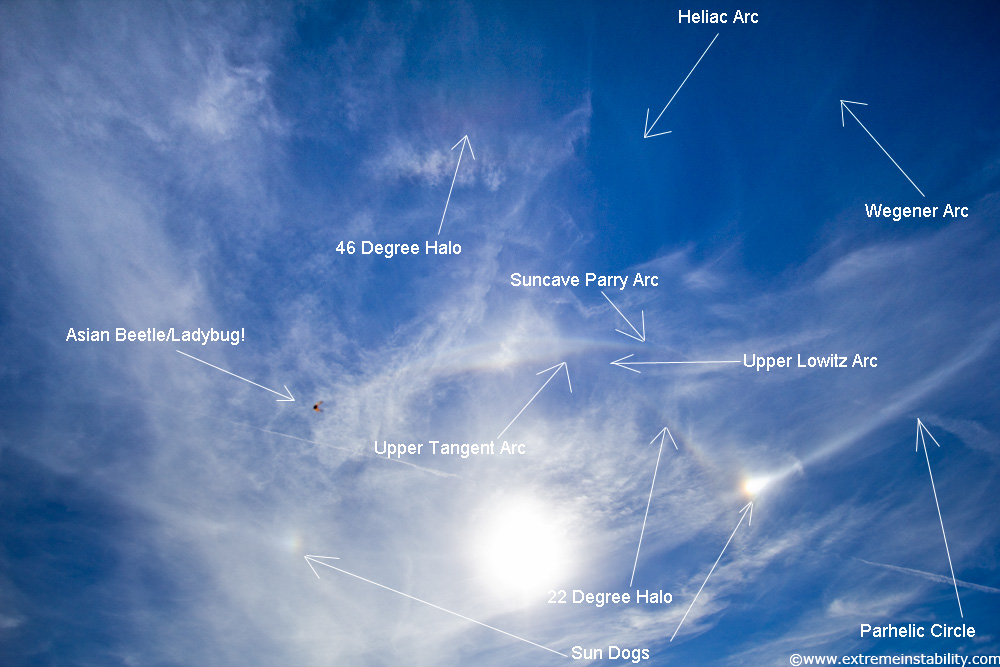 Here are most of what I saw today, though not each at their best on this particular image obviously. I just noticed I can at least point to most of them on this one shot. The next new optic for me that I noticed was that Wegener Arc. A more rare arc. It was very easy to see as a ring inside the huge Parhelic Circle.

Then comes the Heliac Arc. It loops through the sun and then up and over where a Circumzenithal Arc is often seen. What shows on my shots is clearly that arc. It wasn't visible all that much of the time.

About twice as far out as the 22 degree halo I know I was seeing a rainbow arc, not up like the Circumzenithal Arc goes, but down like a 46 degree halo or supralateral arc. I could clearly see separation from it and some other colored arc at the same time up there. It's rather faint in the above image. I'm informed that was indeed a 46 degree halo and not a supralateral arc. Evidently the superalateral arc is always touching the circumzenithal arc and what I saw and imaged had clear separation. It's more obvious on images down lower on the page.

It figures on a shot with a bunch of infrequent optics that I get a wing open asian beetle flying through lol. Ok, down below we should be able to show these more clearly on multiple images. 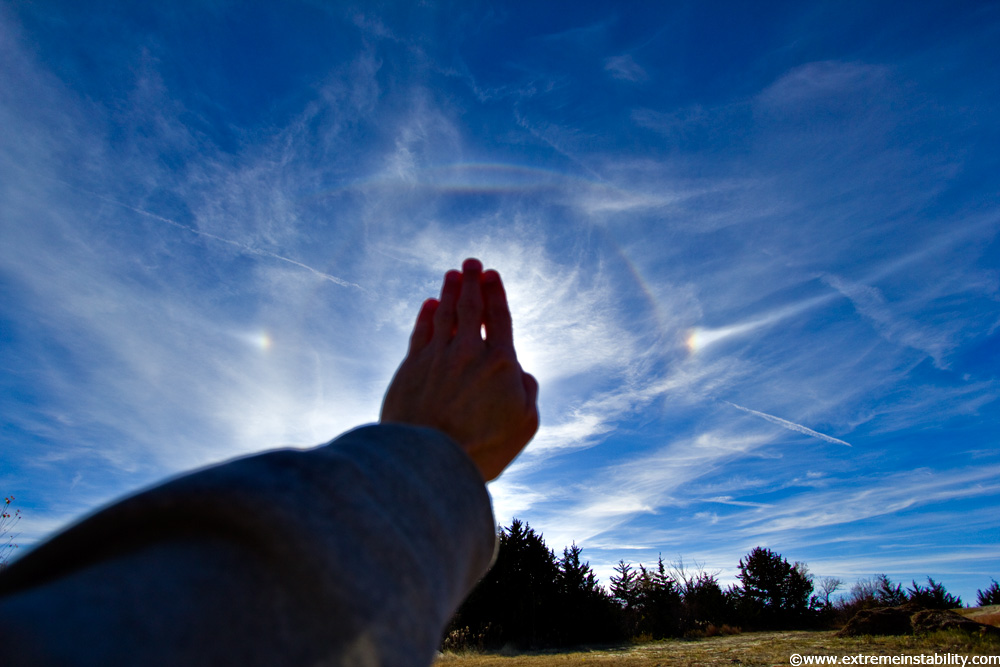 I don't know why I even bother blocking out the sun. It's still just as harsh lighting trying to get these things to show up worth a darn.

I kept putting my fingers in the shot so I could later be sure where the arc was when it was more faint. I'd then take a second shot right after it without my hand. I'm "grabbing" the Wegener Arc I could see with my eyes at the time. 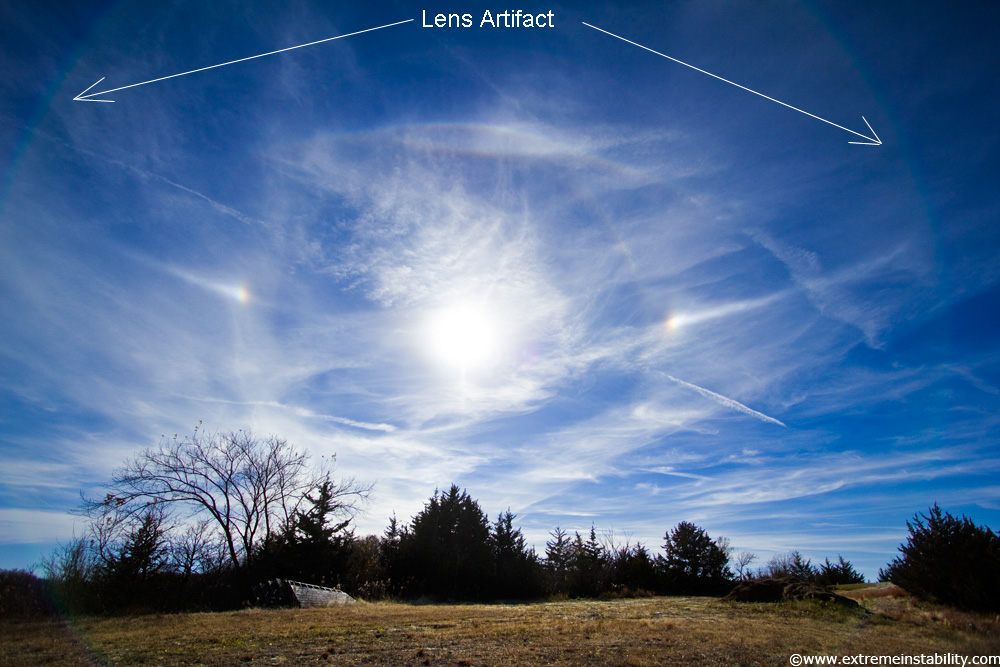 My ultrawide angle 10-22 EF-s when pointed right at the sun at 10mm will give off this lens induced halo flare deal. It's obvious when it is showing in front of the ground. Not sure why I put it on here. I guess just because it could easily make someone think they got some halo that wasn't there. 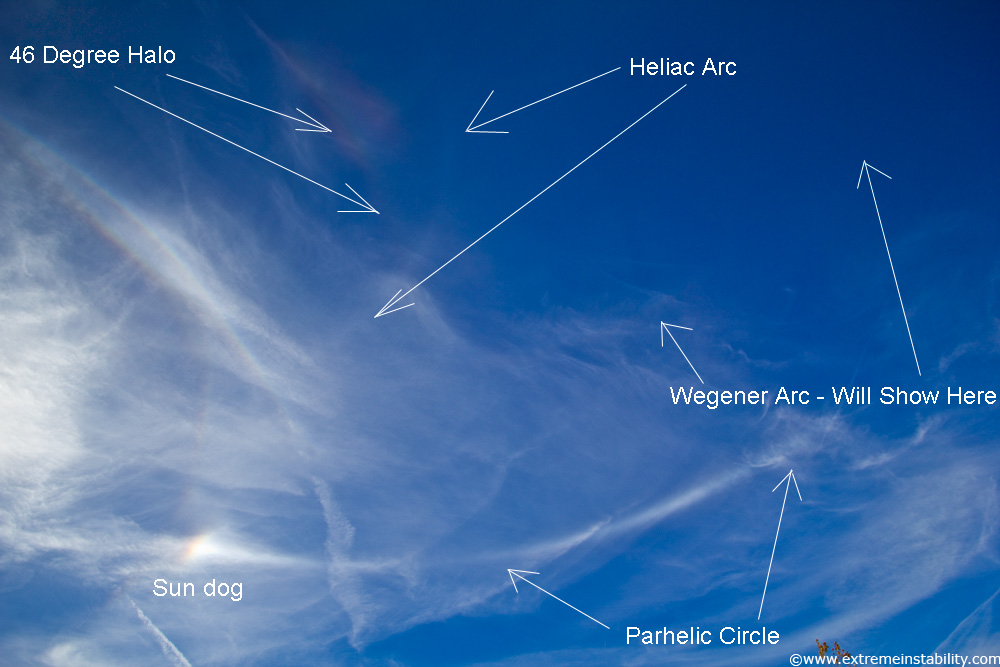 Here the Heliac Arc is pretty clear. The 46 degree halo in this image actually seems like it is touching the cza more and would make it a supralateral arc instead. I think it needs to overlap more than simply touch. Either way it is clearly a 46 degree halo on a couple images down below here with big separation. 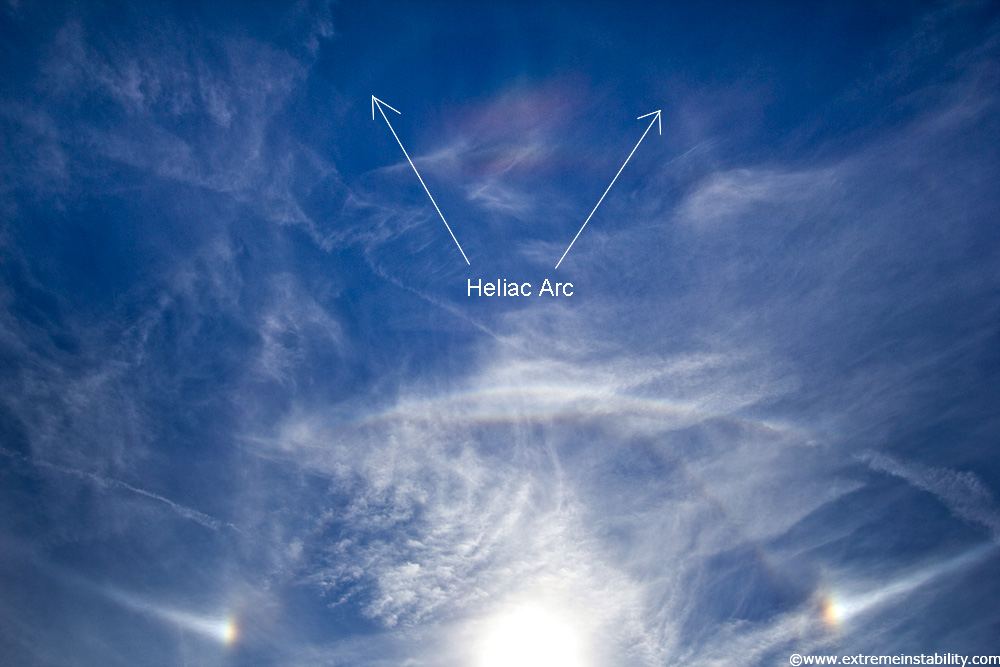 Maybe the best shot of the Heliac Arc I got. Also that 46 degree halo and circumzenithal arc area is rather evident....and inside the Heliac arc. Trace that arc down and it loops through the sun or close to it. I hope I got these right because it was somewhat of a pain to label them, or at least will be when I have to redo it lol(which I've now done a couple times). 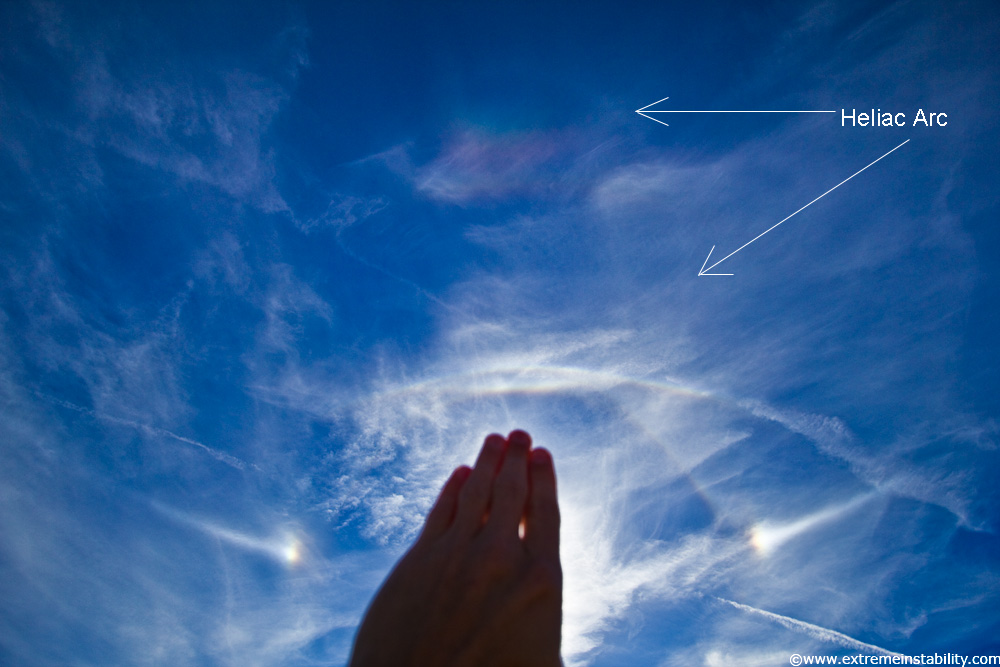 Yeah this one you can see the Heliac Arc ringing down towards the sun like it should if that is the arc this is. See and that color is still there where the 46 degree halo would be. That's just not lens flare because I kept seeing something going on there and more than that it was clearly two bands. 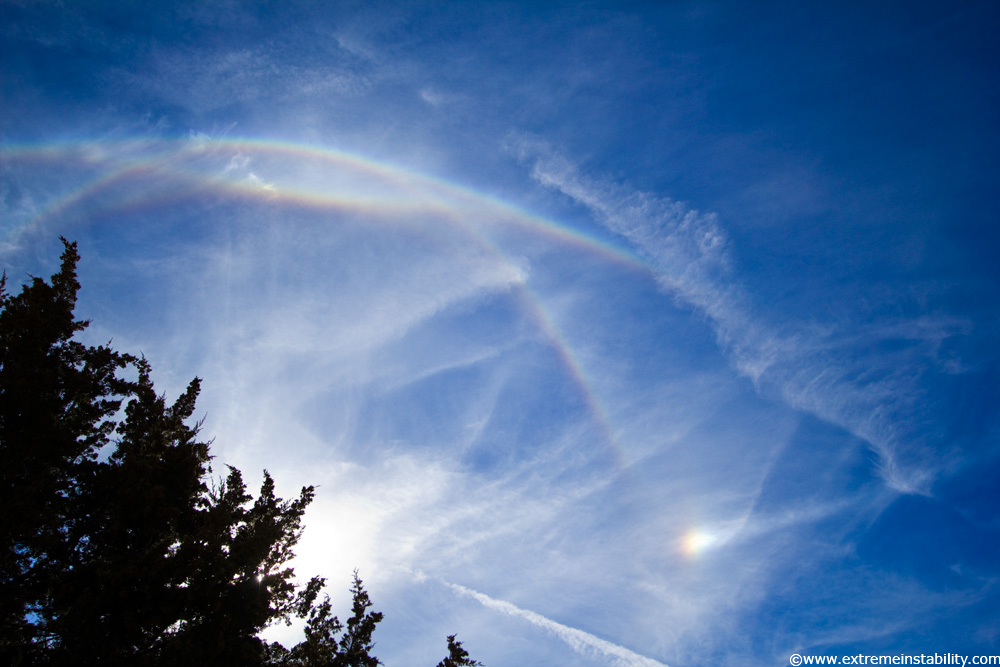 The 22 degree halo and I guess upper tangent arc activity was a little strange compared to what I've seen before. The halo almost seemed angled different at the apex and also the whole mess was really vivid in colors. Thanks to Marko Riikonen, Ágnes Kiricsi(both from Ice Crystals Halo Blog) I should have the above display labeled properly finally. Just a little confused on what was going where with that but they should have me straightened out. 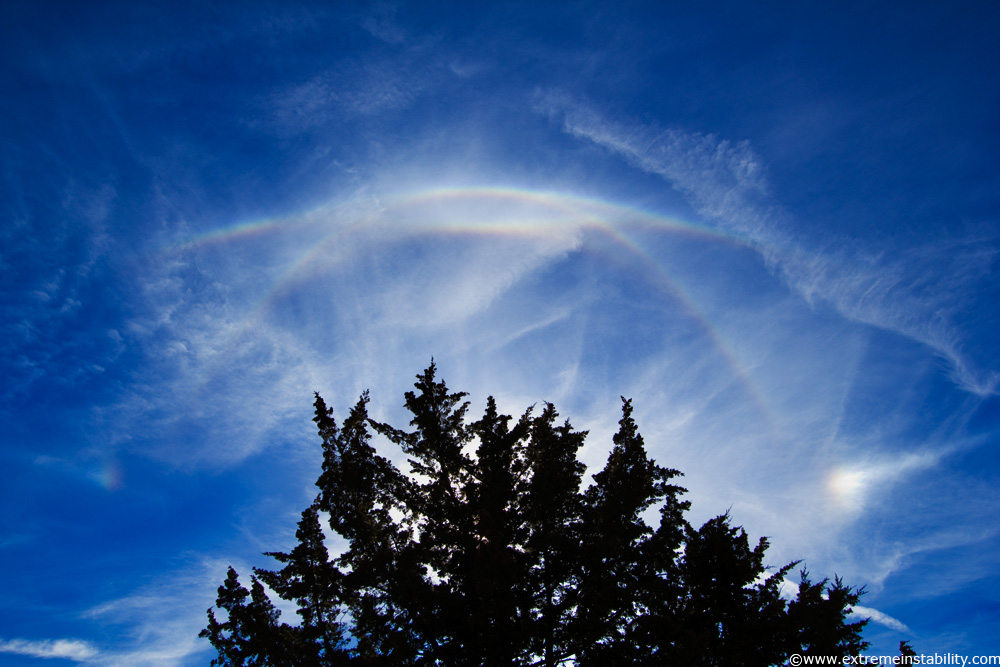 Another shot of that, which I have labeled down lower yet. 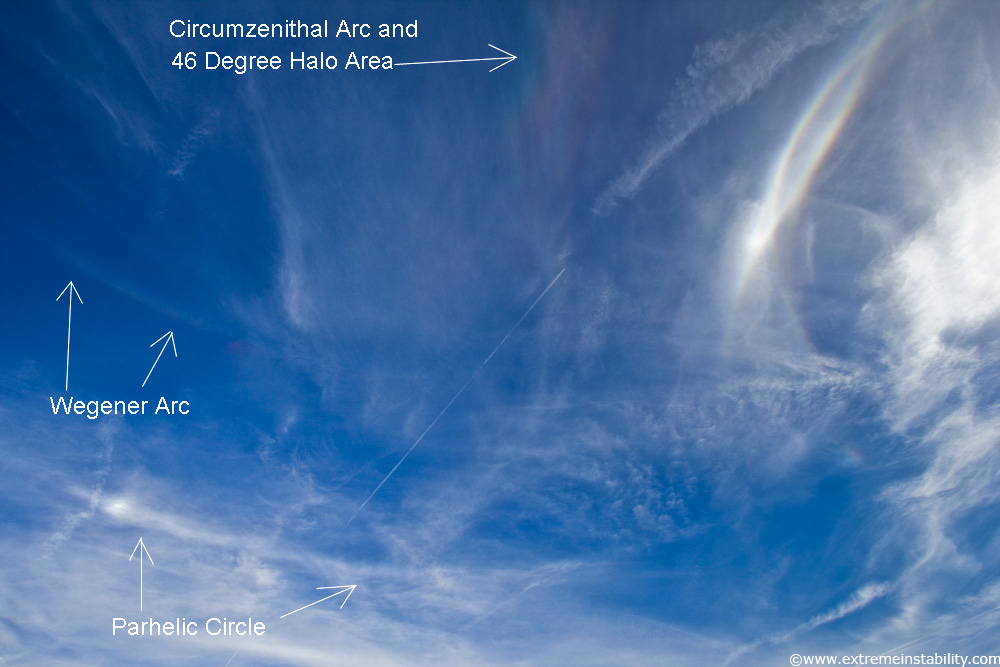 This more towards the east. The Wegener Arc around this time was visually rainbow in color and just rather obvious. Notice again the colors up there where the 46 degree halo would be. And yeah that is the same region as the circumzenithal arc would be, but that deal was clearly arcing the other way like a halo. Though can't tell if it was during this shot or not. The arcs will go red-green-blue from inside out. You start outside in on that one you can see blue-green-red....then some faintness in a "gap" and then a red band again. 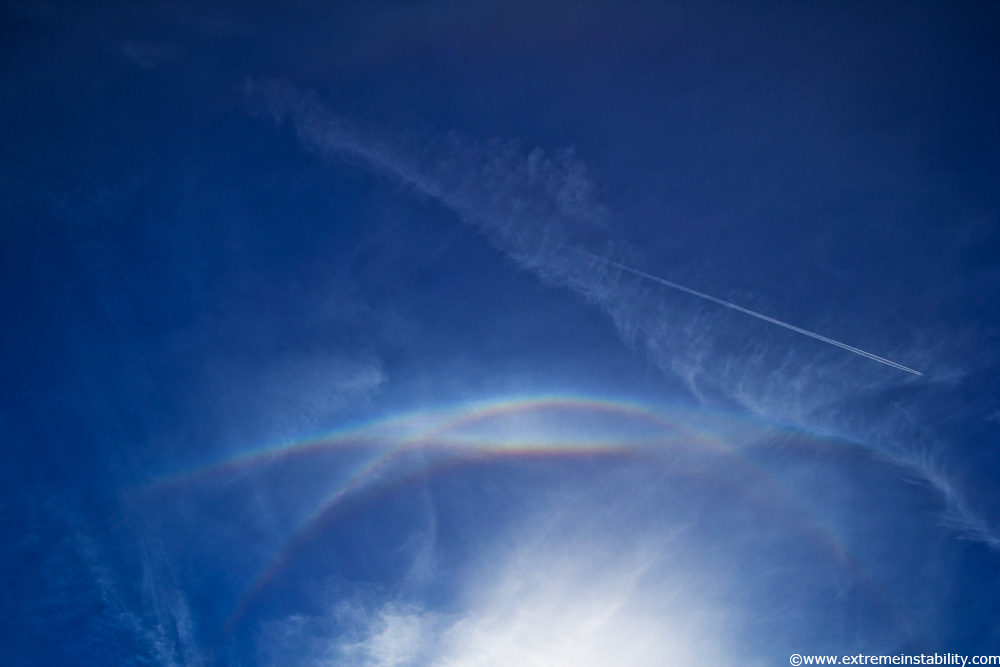 Here is a pretty clear shot of the top of the 22 degree halo. Pretty vivid happenings there. That clarity I don't gather is very normal. You can see secondary bands coming off things there. So you can see there must be FOUR arcs there since you can see FOUR lines criss crossing each other making an "x" on either side. Labeled on the following 2 images. 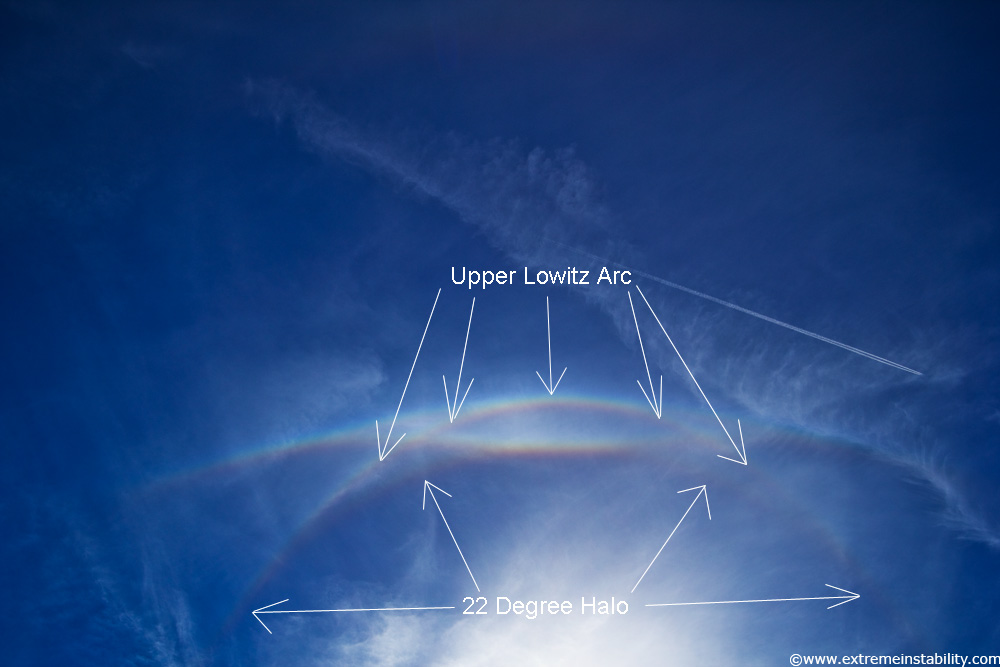 Ok I think I have these sorted out. They were tricky for someone that knew extremely little about arcs before this display. Here is my original thinking that should explain a way to be confused and actually miss that you saw something more rare. I thought the bright full halo was all the 22 degree halo. In reality the 22 degree halo goes fainter in the corners in this case, while keeping the round shape and can be seen right at the tip of those arrows. Because then the upper tangent arc sits atop that and has the wing shape appearance. Then the Suncave Parry arc is the top most vivid arc going mostly straight out. The upper Lowitz arc comes from the same area, over and down and connect with the 22 degree halo. Then the Lowitz arc apparently goes back out away from the 22 degree halo through the sun dogs. Atmospheric Optics sites indicates Lowitz arcs are very rare. 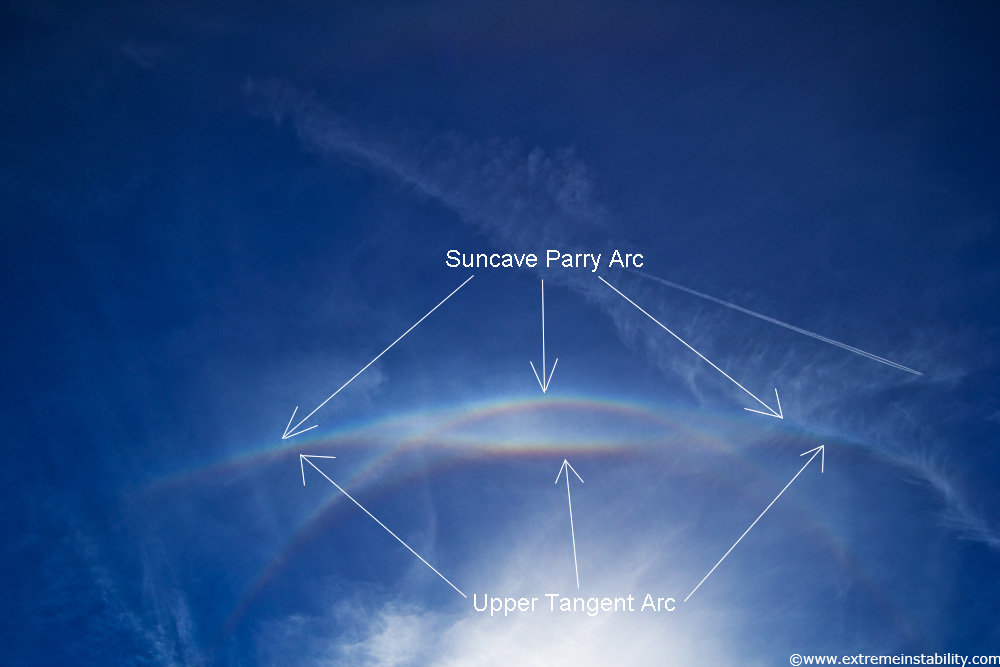 A second labeled image showing this somewhat confusing display. (I make things more confusing than they ever need to be) Atmospheric Optics site also indicates the Parry Arc is rare as well.  What was tricking me here was thinking the Lowitz Arc WAS the 22 degree halo up there. This then was making me think the Parry Arc was a Circumscribed Arc. I thought it seemed odd the 22 degree halo looked pinched. I remember noting it at the time. So then I kept thinking the upper tangent arc, the wing shape, was in a strange location inside the 22 degree halo, under the top. The key is knowing the upper tangent arc has to sit atop the 22 degree halo. That and to look for the faint arcing of the 22 degree halo in there and see it isn't the brighter Lowitz Arc...if such a thing was there obviously. The Parry Arc up there and the Lowitz Arc seem to really steal its vividness from it(from the 22 degree halo's top portion). But yeah that is what is going on here, how I have it labeled. I haven't cross checked my labels with the experts but they told me what arcs were there and how they were(I have now and they corrected the supralateral arc as being a 46 degree halo not the supralateral). The left side of the Heliac arc can be seen on this image too. 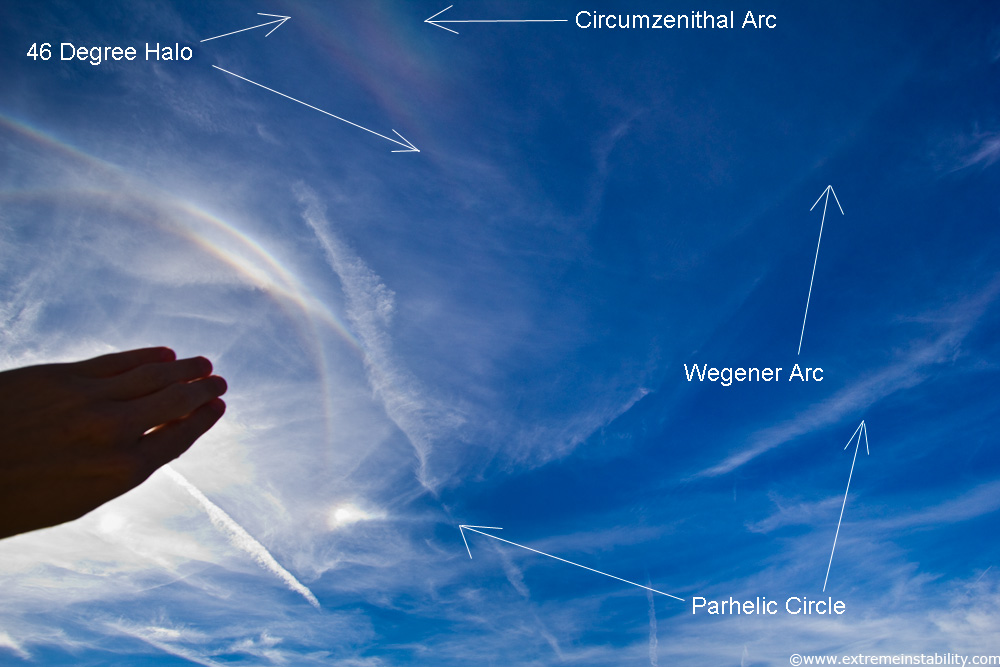 This one shows the two arcs I kept seeing clearly up above in the area the Circumzenithal arc would be. The 46 degree halo would be the lower one that curves suncave and is not overlaying the cza(cirucmzenithal arc)...the arc above it. I could visually see the rainbow colors on the Wegener Arc. Seemed the east side of it was even more vivid. You can barely make out the red/green/blue of it on the above. 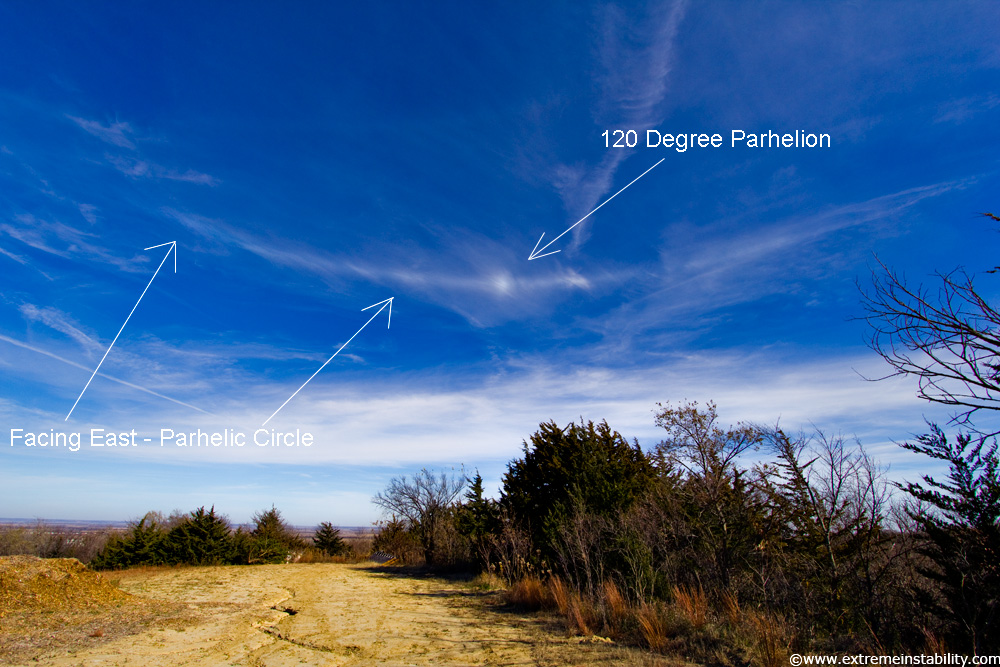 The Parhelic Circle kept getting "dogs" on it. I was seeing them on both sides but for some reason took no photos of the west side one. I swore the one to the east had another near it, but maybe that was just a brighter contrail area. 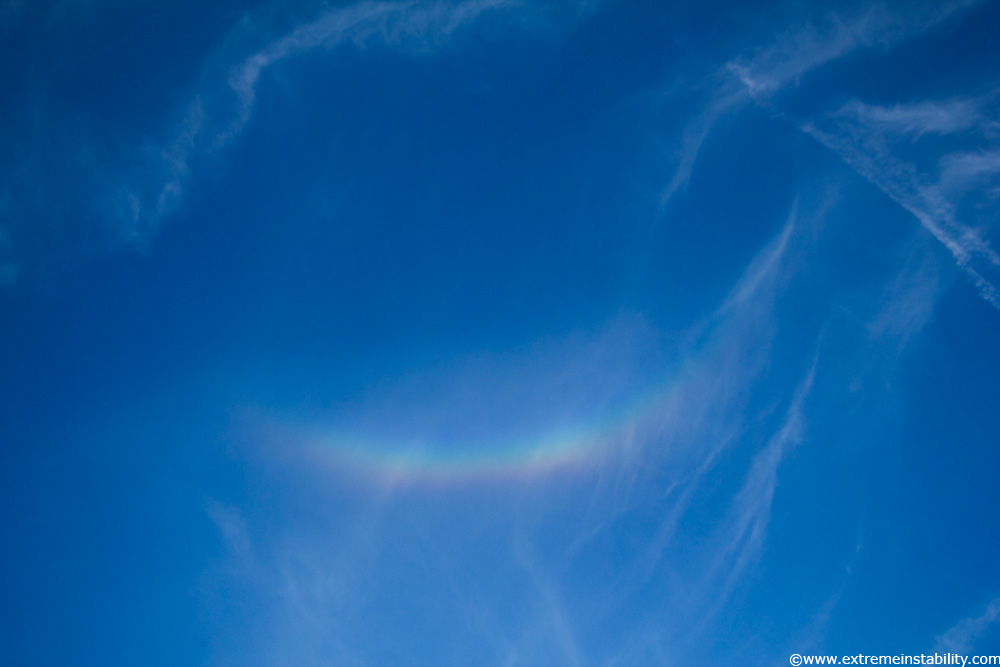 Now that is a circumzenithal arc later in the afternoon. It was never insane like it can get, such as this day in 2009.

Phew, tricky account! Glad it is finally done now and again thanks to the help from the 3 listed up above. 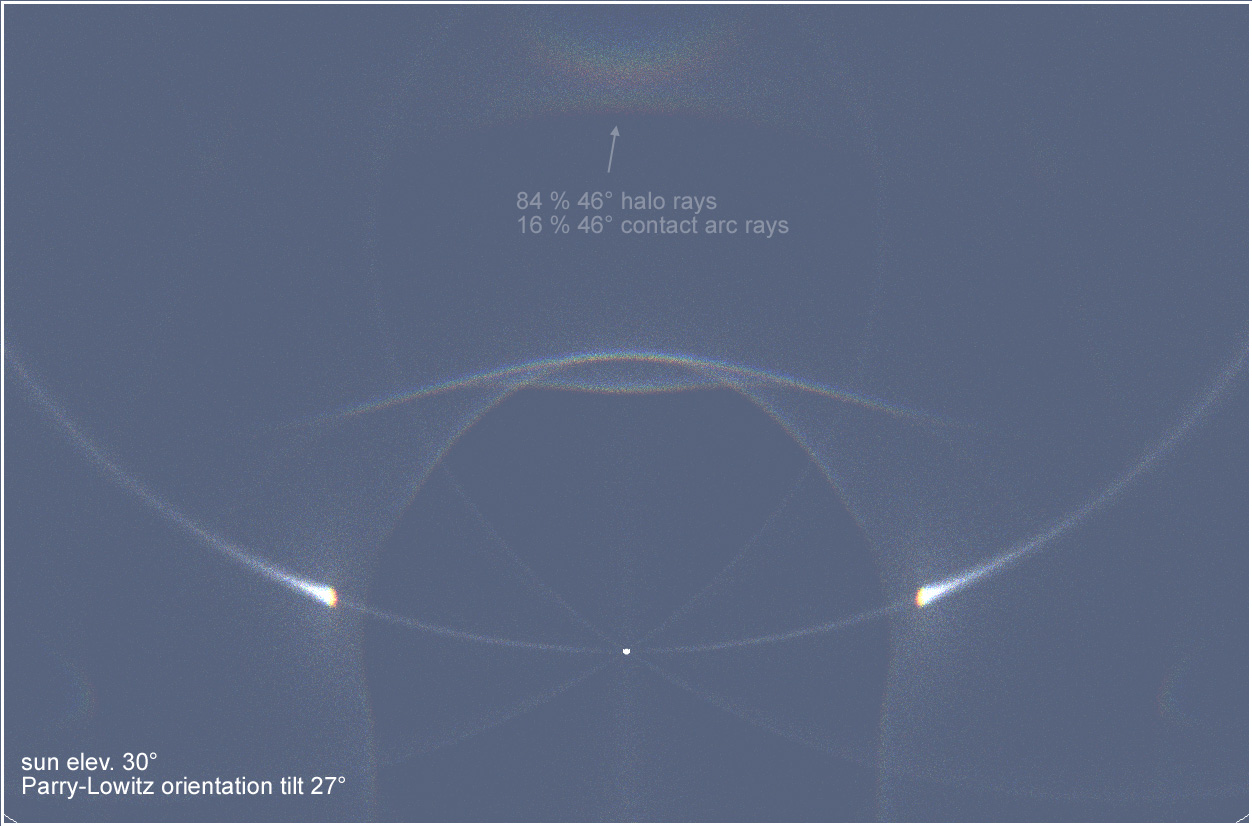 There has been some discussion if it is a 46 degree halo or 46 degree contact arcs, which from what I understand the arcs were only first photographed in 2006. Using HaloPoint software Marko Riikonen created the above output showing my display. Evidently the software can create what would happen by giving it sun elevation and percentages and types of crystals. Seems certain displays mean certain types of crystals must be present. So I guess you work with the known, that and sun elevation and then change the rest a hair here and there till it shows the display you had. Pretty crazy stuff if you ask me. He's pretty certain it is the 46 degree halo.