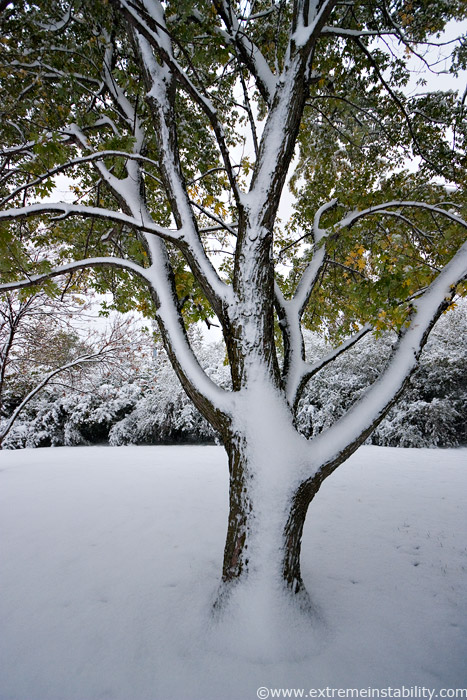 I don't know if this can be called historic or not, in some ways it can. For reference Omaha's earliest 1 inch snowfall in recorded history is October 9, 1970. That time it was 3.5 inches. One day off of that one. So it is damn early for snow. Heck most leaves are not only still on the trees, but they hadn't changed colors. A few Maple trees are the exception and of course the Cottonwoods dropping them. And for areas of north Omaha and 15 miles north or so it in some cases doubled that 3.5 inches. I measured 6.5 inches in Ft. Calhoun Nebraska where I shot most of these(I dropped south some to try and stay with falling snow). Another reference, the normal high for the date is 68. So anyway, this seems like it would be the earliest this much snow as fallen in these areas. Granted the area that got this much around here is not very big. North Platte NE broke a 100+ year record for snowfall in October with about 14 inches recorded at the weather service office there and that record of 13 inches was at the very end of the month too. So quite the early snow event, to say the least. 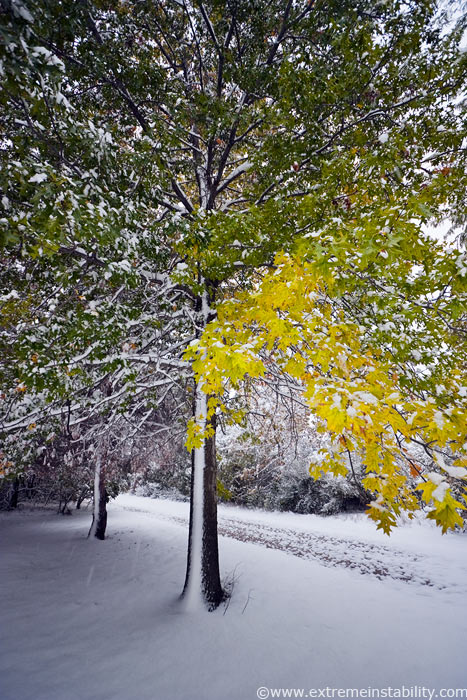 Here is the reason I went out, looking for fall colors with the snow. Problem was the fact it was still before most leaves even turning. 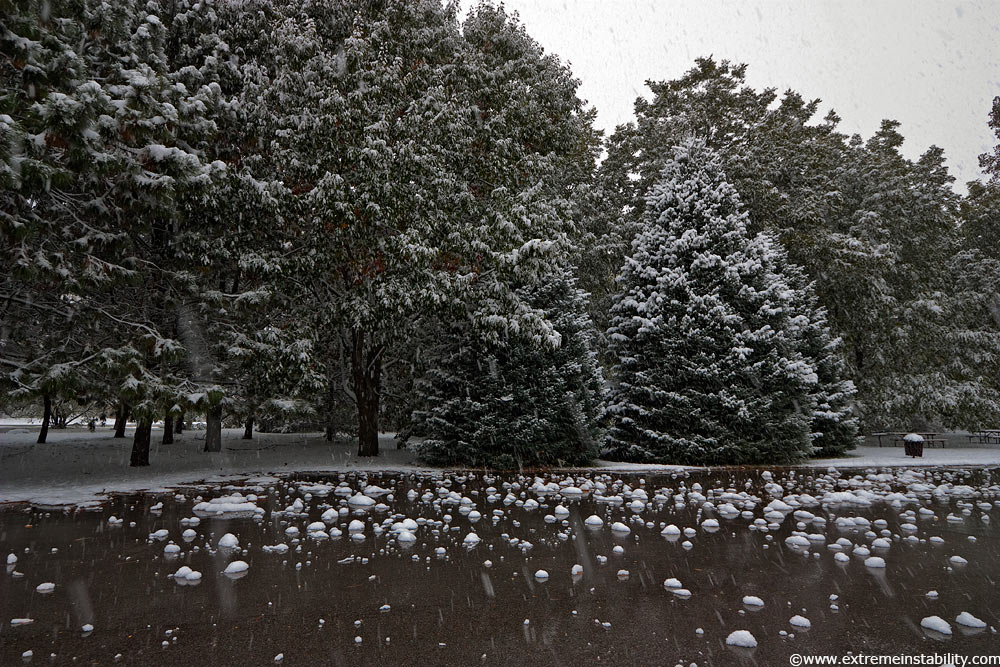 I pulled into the Ft. Atkinson parking lot and was like, what is happening here. Turned out it was just snow accumulating on the leaves laying around. 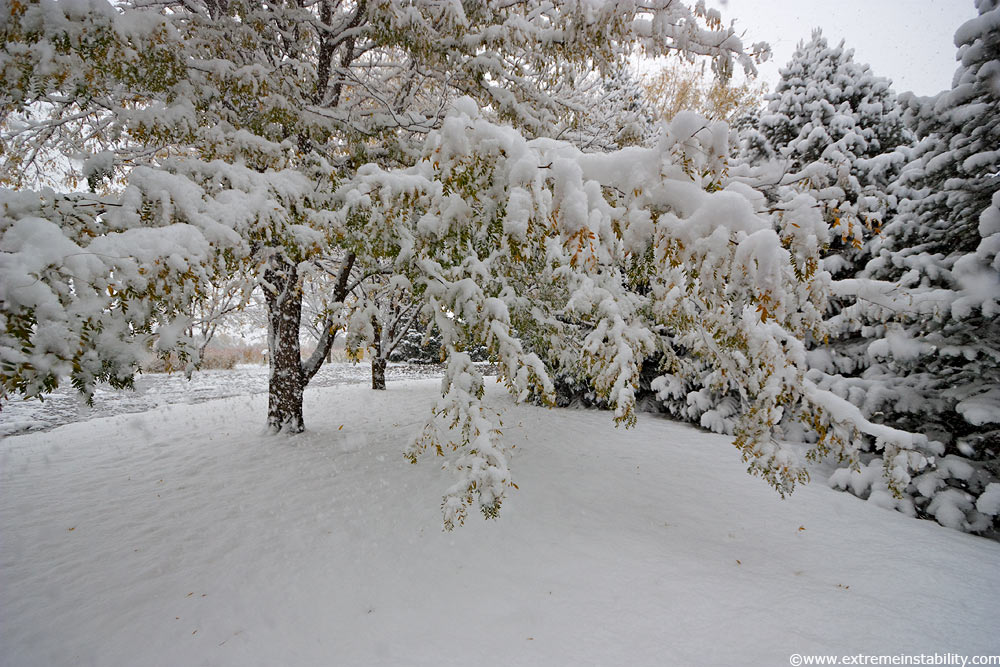 It really was odd to be playing in such snow already. 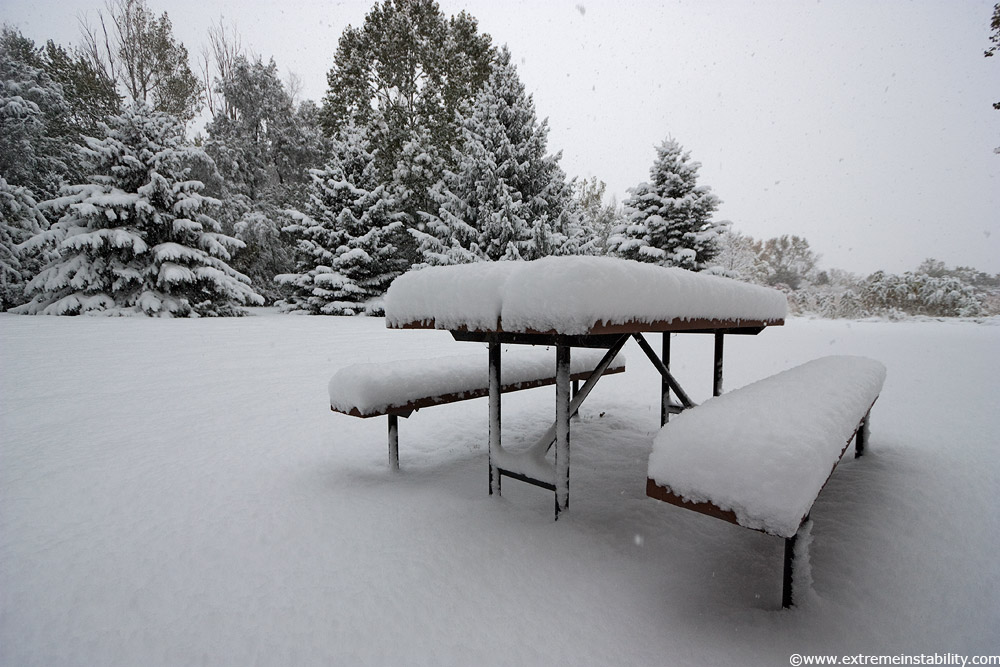 Piling up and still coming down. 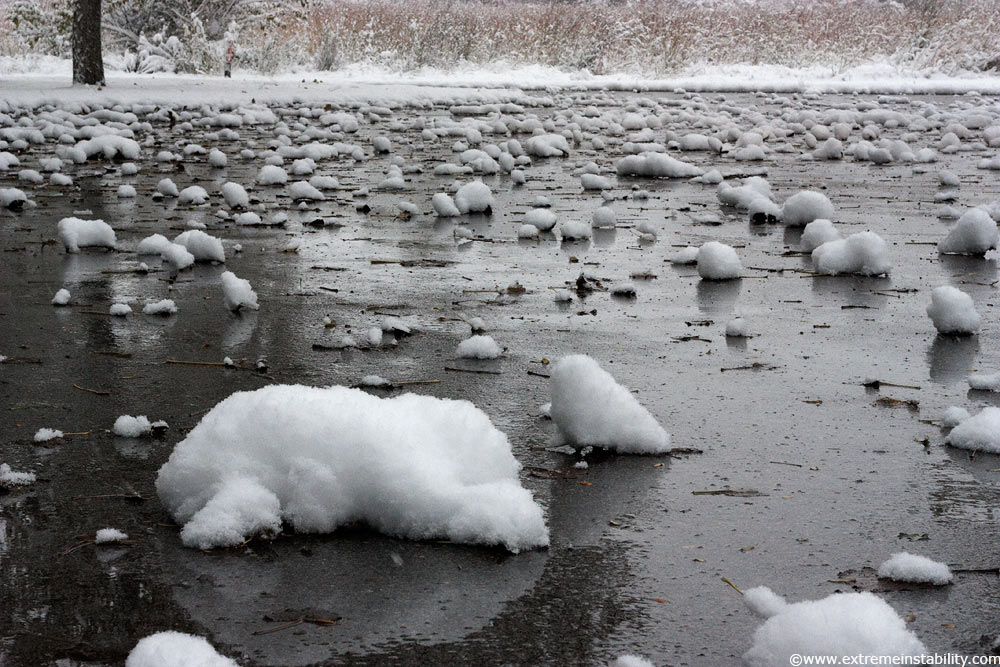 Kind of a tough thing to shoot, since you about have to put the camera on the ground and stop the aperture down really far for some depth of field, therefor killing shutter speed. 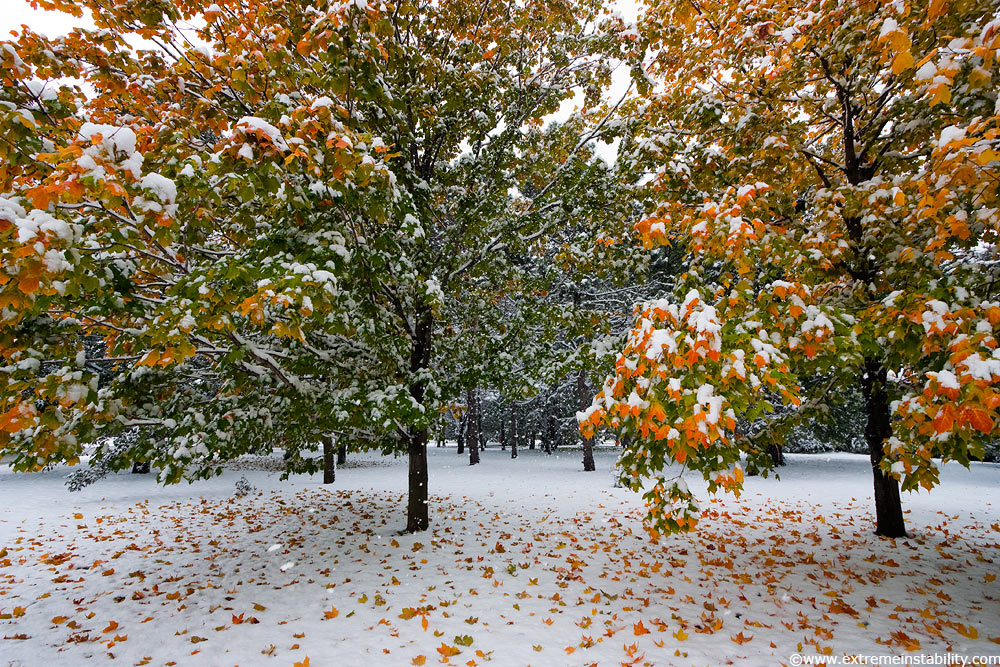 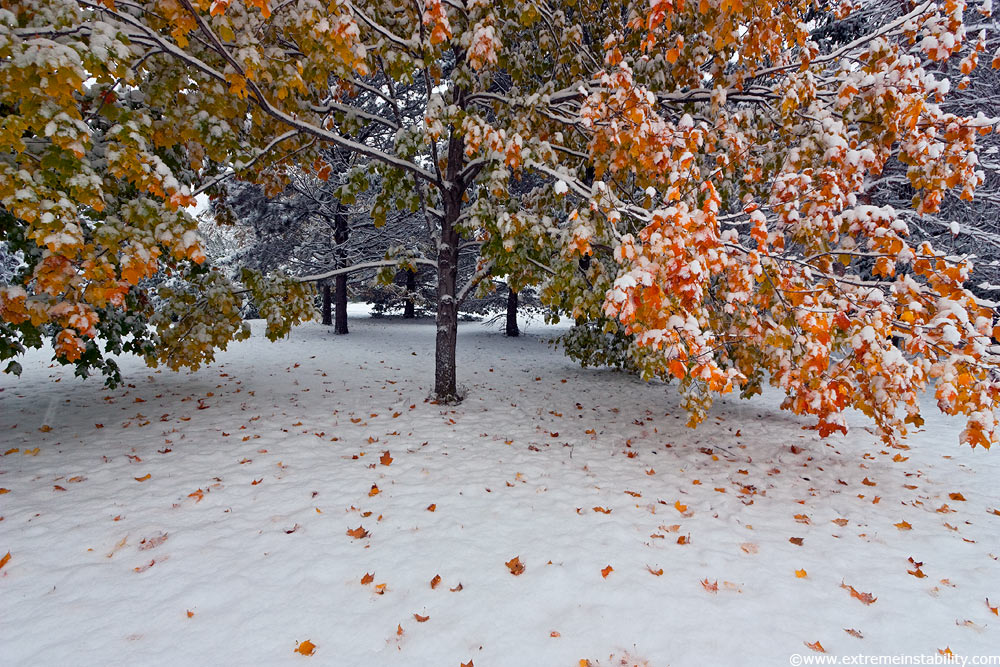 I was lucky to track down some Maple trees, but man do I wish there were a whole lot more of them. 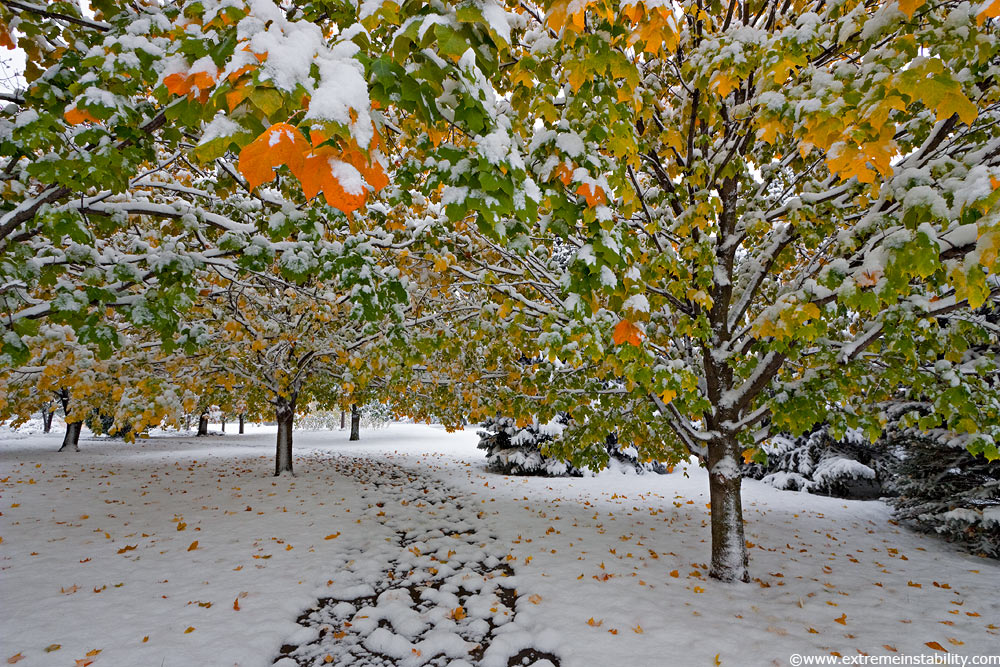 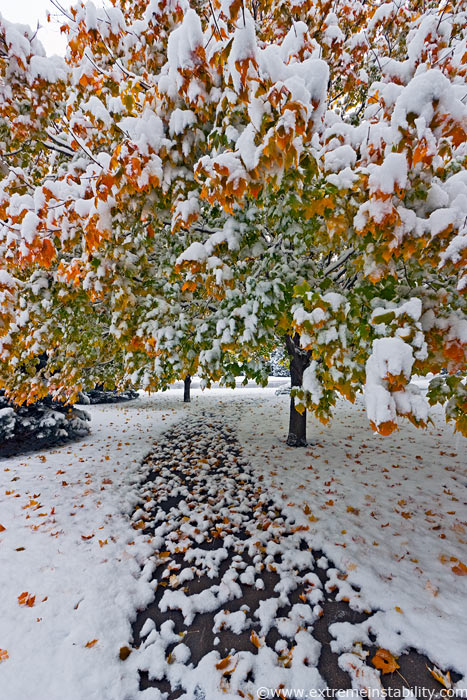 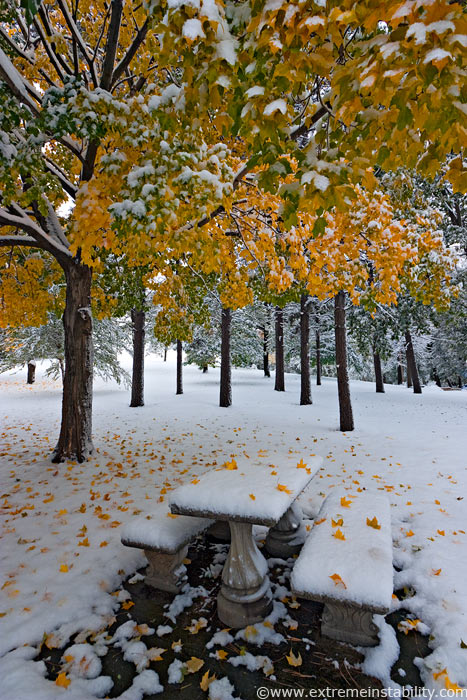 I'm now in the park in Ft. Calhoun. Pretty cool little scene with the golden colored leaves and the table. 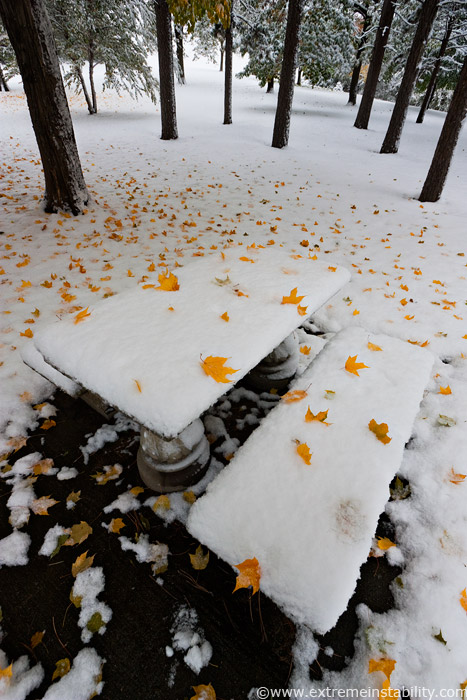 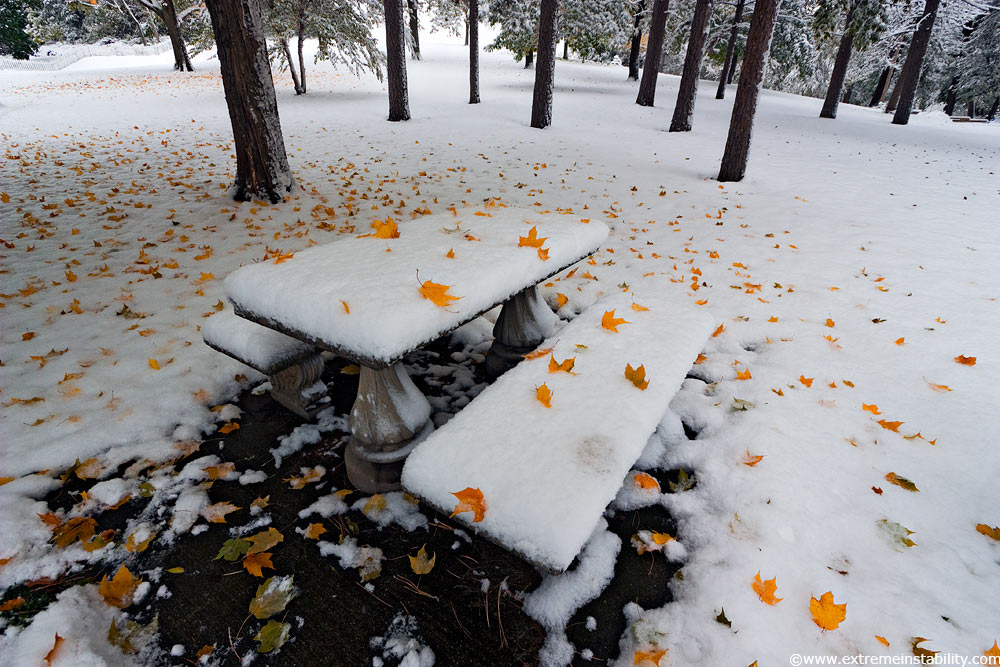 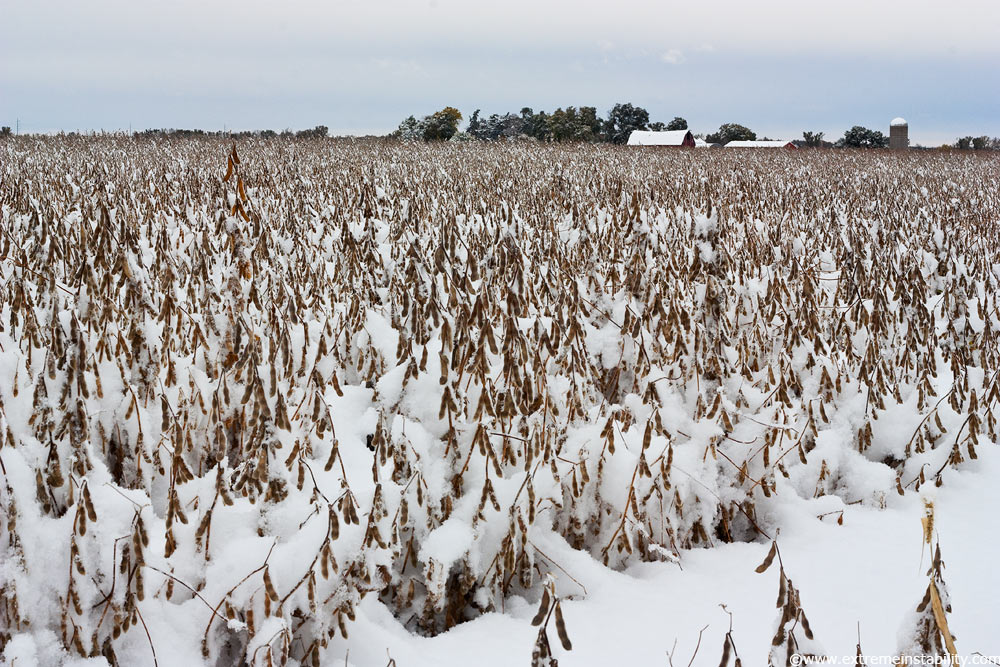 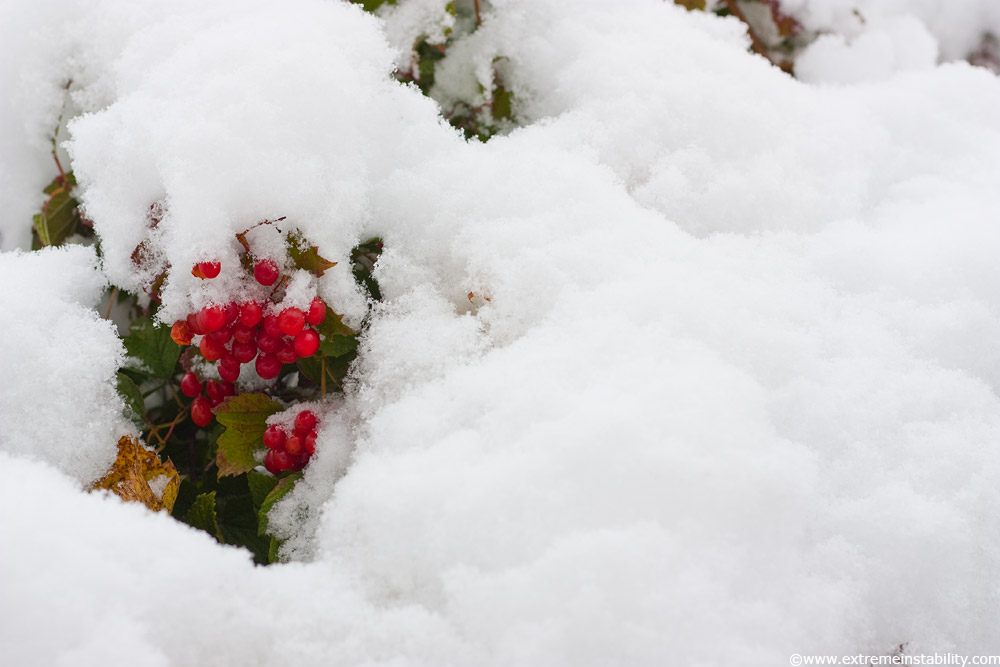 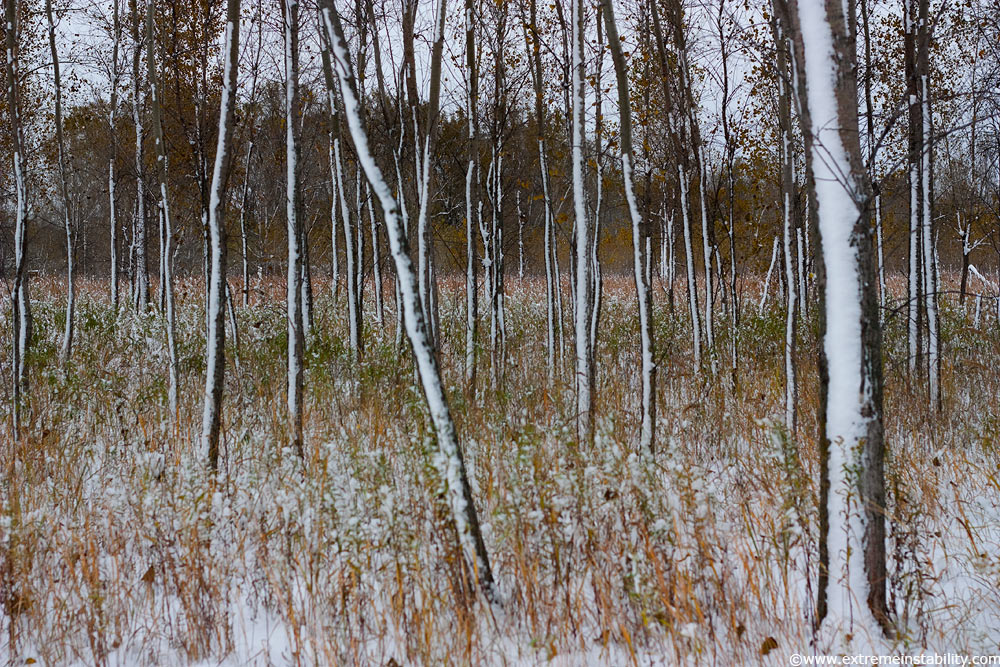 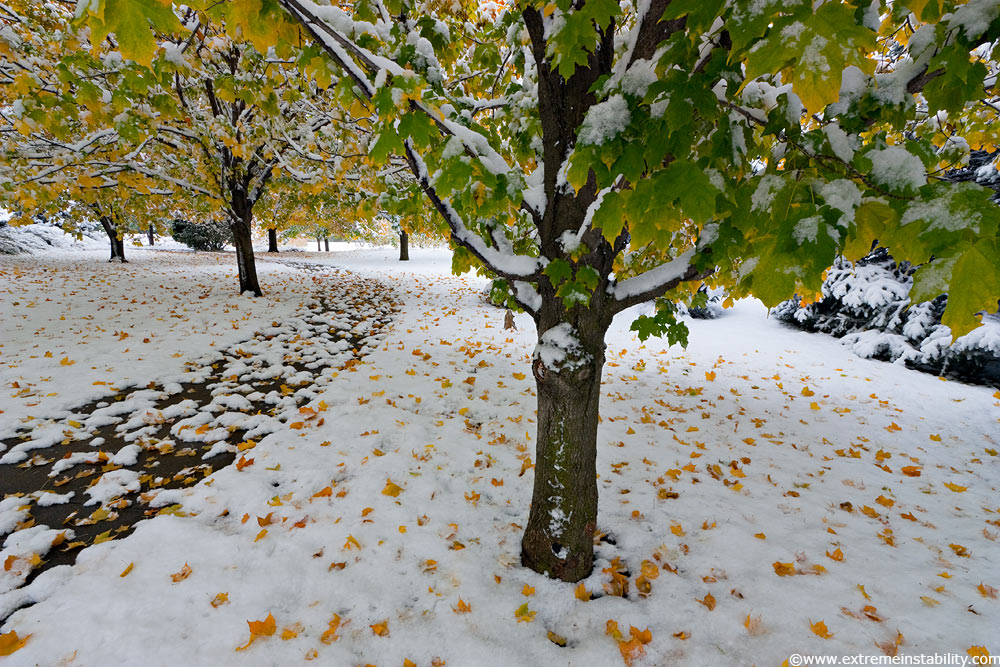 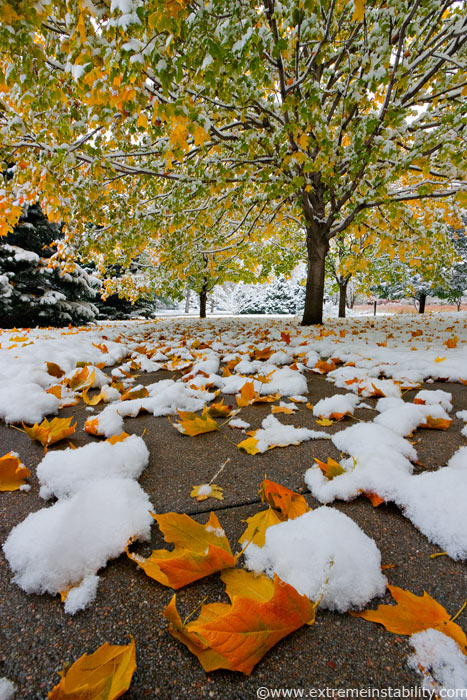 Another hard shot with the camera lens pretty much on the ground. Stopped way down for a greater depth of field. 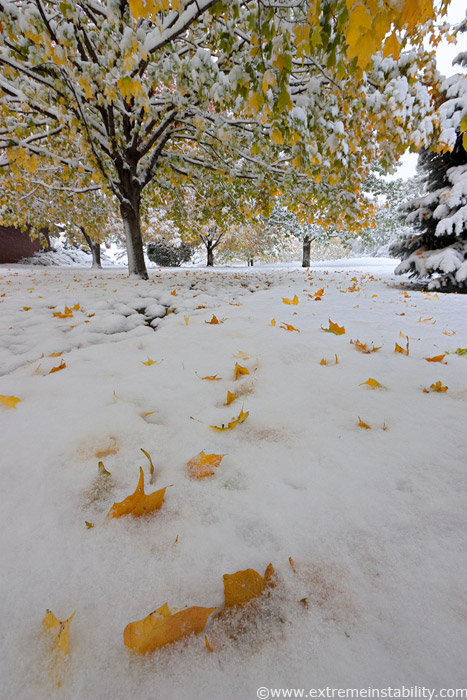 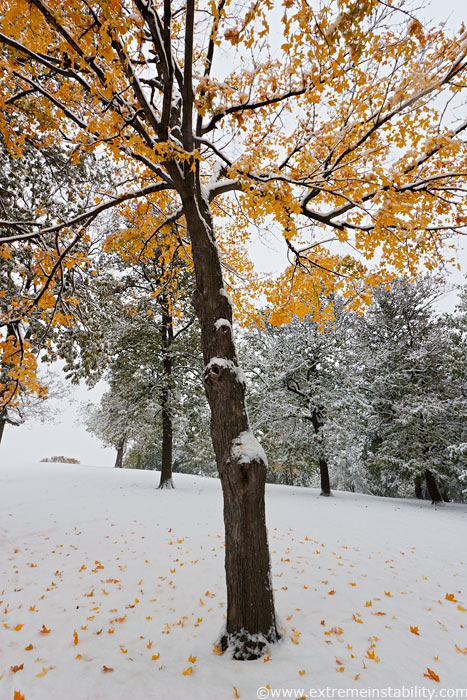 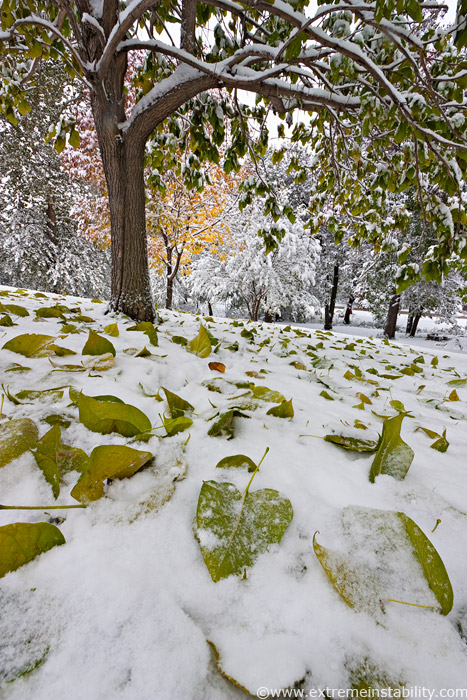 I don't know that I ever noticed the red, orange, and white mix in the background of these monstrous green leaves. Every 10 seconds another of these green leaves would come down to the ground. 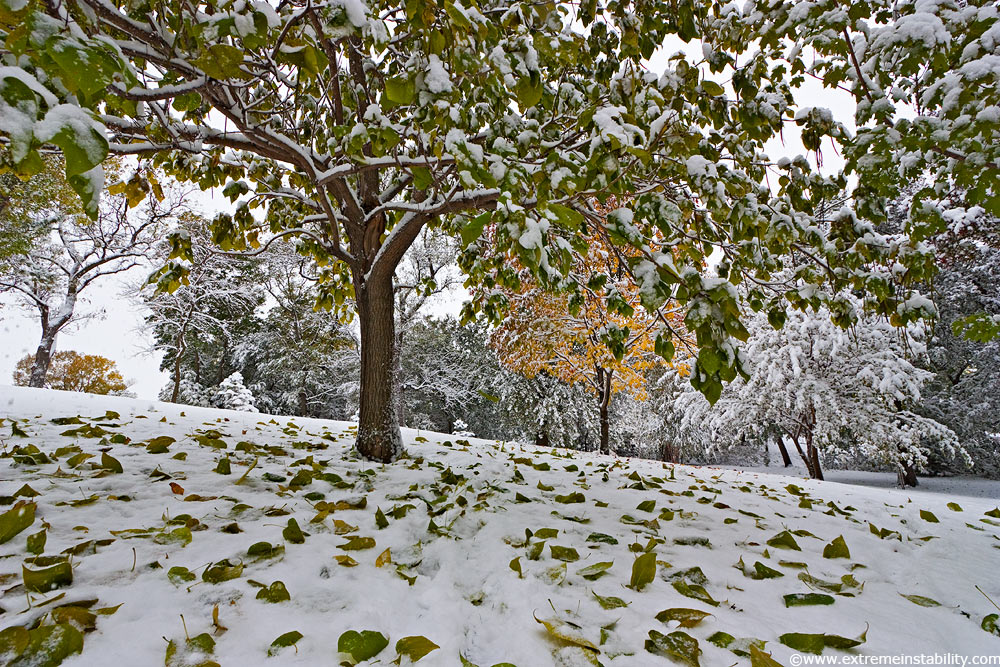 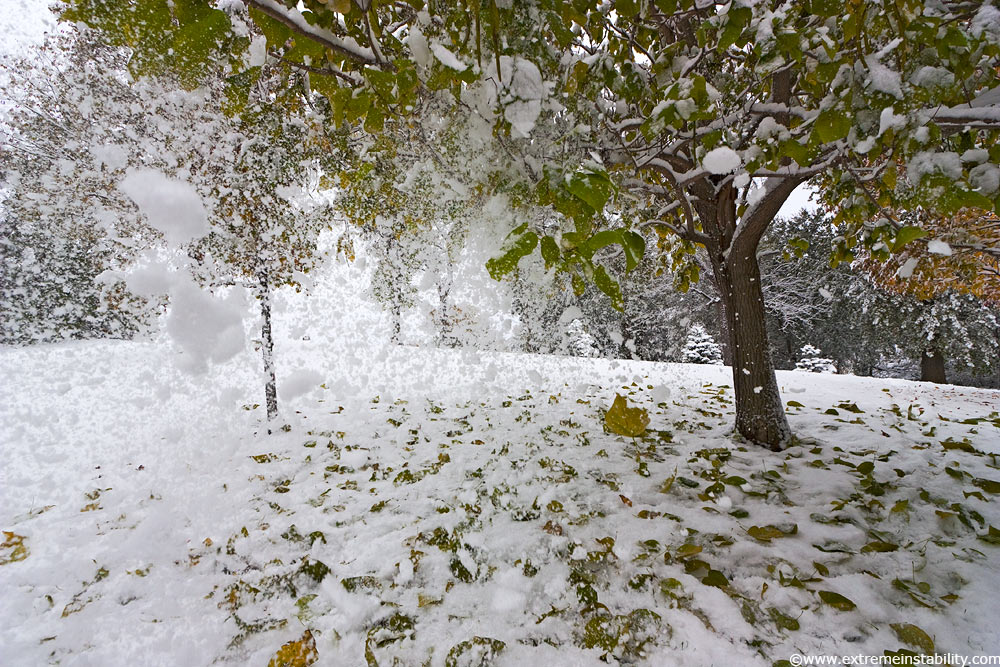 I yanked on the branch, since shooting a falling leave here or there wasn't as interesting as it seemed it would be.