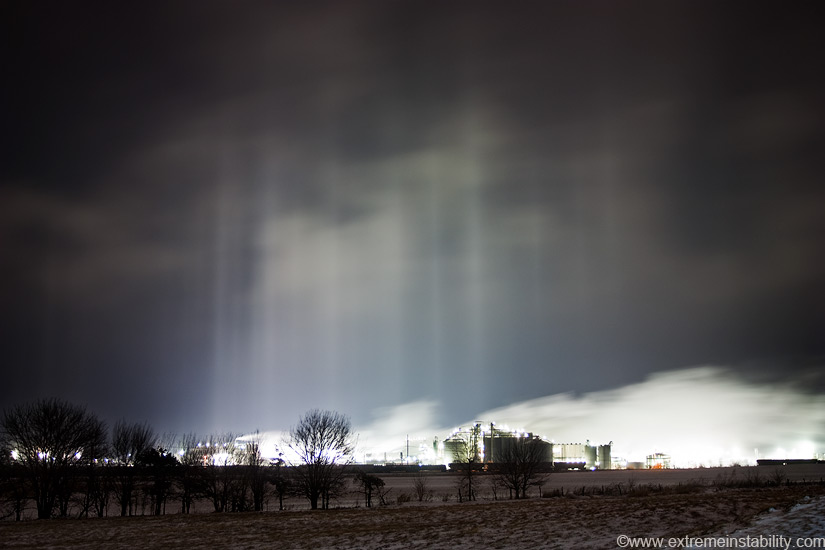 This entry is from a few different days, obviously. I think this was on the 10th at the end of a weak storm. Just enough snow/ice left in the air to occasionally make weak light pillars over the plant. 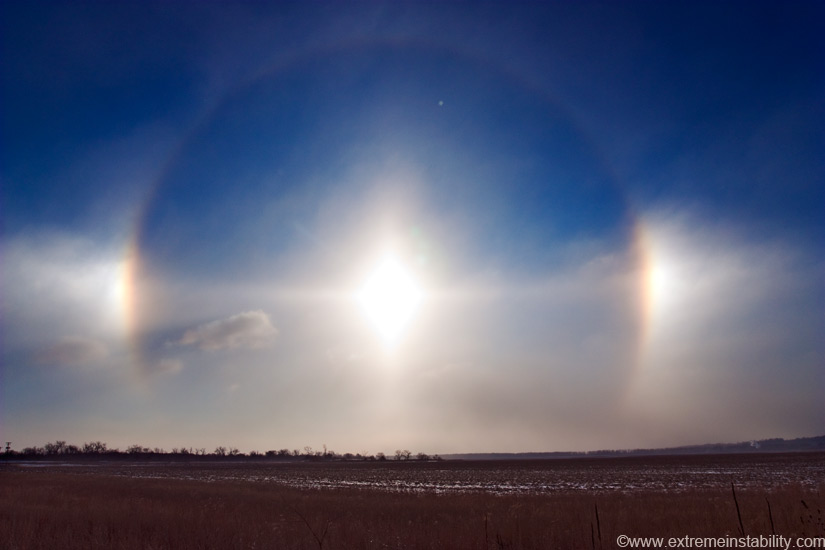 It's now the morning of the 14th. I should learn. I figured the next morning(15th) would be best as temps would bottom out then. But I woke up early anyway(14th), looked out and saw clouds. Woke up again, still before sunrise and looked out again...clouds. Then my sister calls around 9 waking me up again. Before I answered(errr called to hear the voice mail) I figured it had to be sun optics. I look out and sure enough, super bright pillars. Crap I thought. I listen to the voice mail and evidently people had been calling the radio stations over the big rainbow around the sun. So off I went. The best time to see these I've learned isn't really when it is the coldest out, but whenever you can see the sun come up right behind a departing snow storm. The air in the northwest flow aloft behind things is still moist enough to contain ice crystals. Seems like whenever I get up the 2nd morning behind a system, usually the coldest, I'm disappointed. It makes sense obviously. I just rarely see cool displays on calm mornings that are frigid, unless I can get enough steam off the river to make an area of ice crystals. So anyway, I must thank my sister for this one, as I would have just slept on through it after seeing clouds earlier. 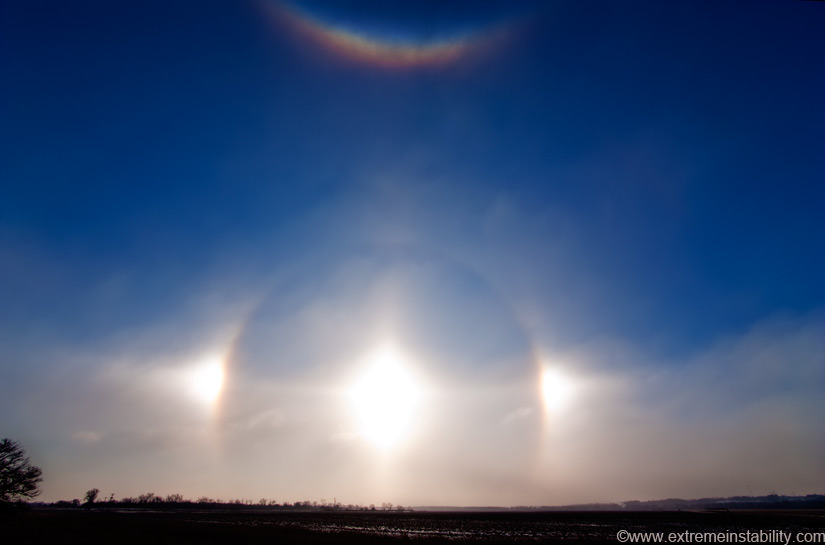 I get across the river into Iowa where I finally pull over to shoot the bright sun dogs and even a sun pillar below the sun. Well I could see a bright bright pillar before I crossed the river anyway. Not sure here. I stop, roll the window down to shoot and think, hey, I'd better stick my head out and look up just to make sure there isn't a circumzenithal arc overhead. I about fell out of the car when I saw this thing up there. It was only my second time seeing one(most likely due to never really looking straight up to see if it's there). This one was far far brighter and colorful than the first time. That and it stayed there. For the next couple hours the thing was there to be seen 90% of the time. 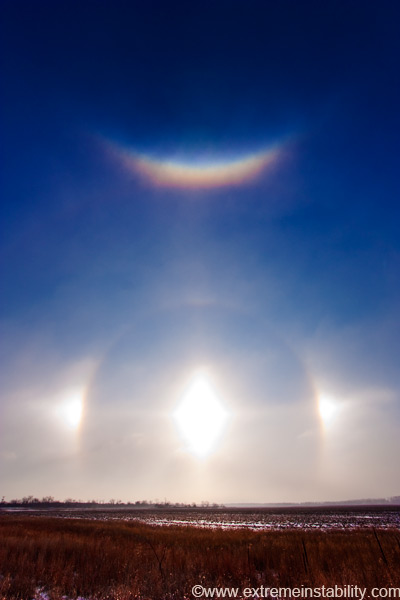 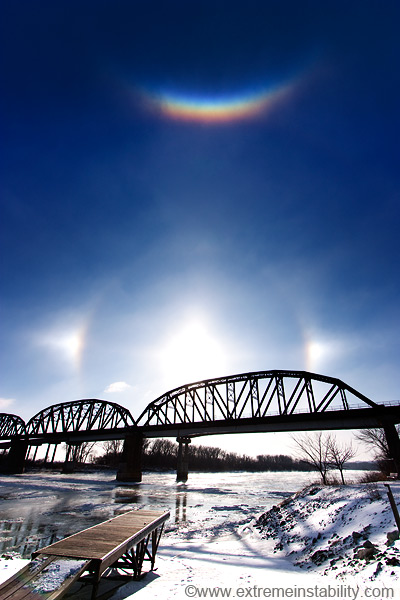 Back on the Nebraska side of the river. 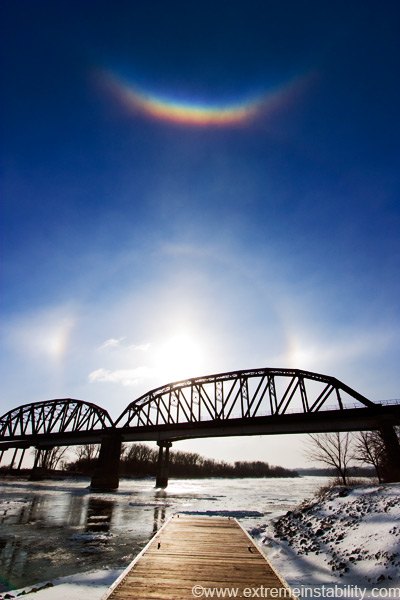 It was really really cold out, temps right around zero, with strong northwest winds. 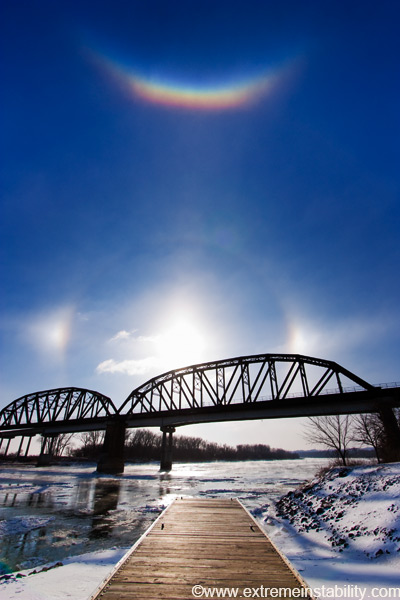 These really don't do it justice. I now wish I had done a time lapse video of that thing up there. 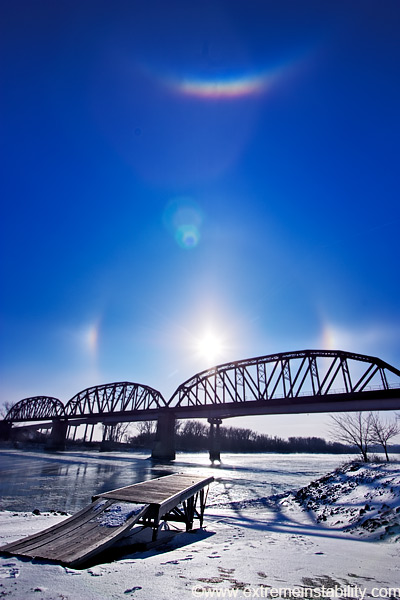 HDR version of it. HDR still a bit new to me. Doing HDR meant having my hands out of gloves to change the exposure. You'd get one set of shots for it, then the fingers would be in severe pain. 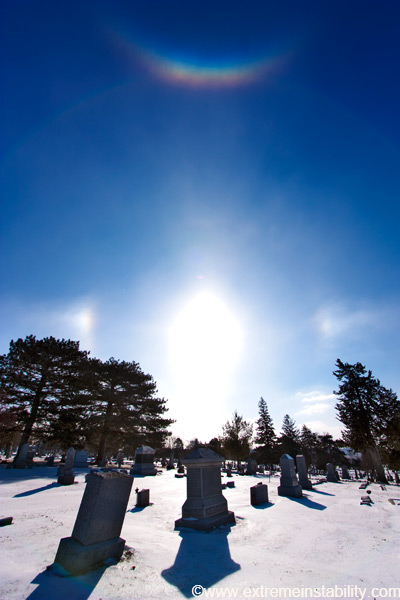 Had to try some place new, so came here! 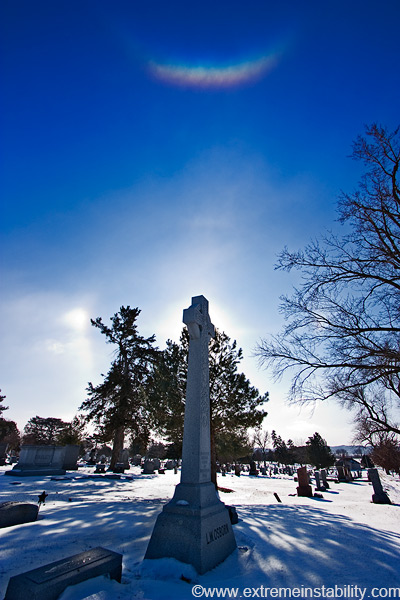 The arc overhead didn't seem to want to stay out as much here. I'm not sure why. I drove to a hill on the west side of town and lost the sun dogs and the circumzenithal arc all together. Seemed like to me one needed some of the steam off the river, or it was just a coincidence. 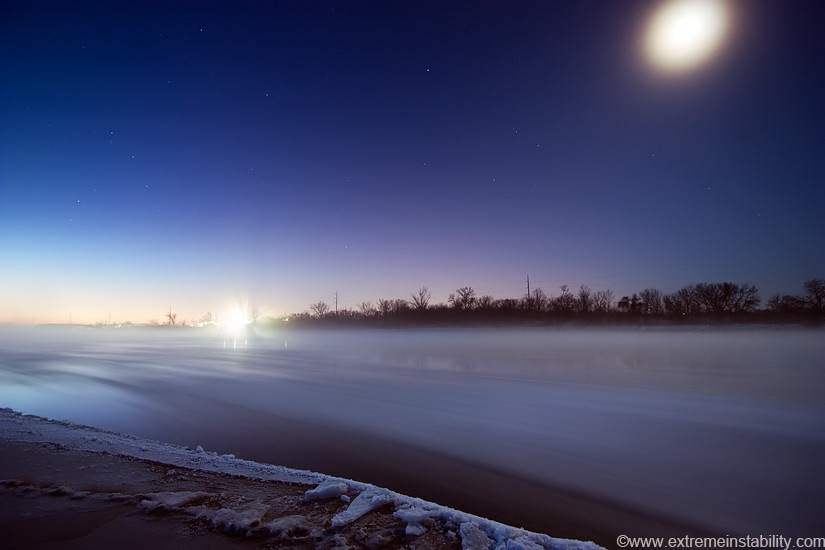 Next morning, on the 15th now. It was now about -18F. I was hoping for river steam which would make an area of ice crystals. But like the summer steam hopes, if there is much of any wind, it just doesn't work as well. The steam blows off the river and vanishes too quickly. There was plenty of steam, just not hanging around long enough or local enough for crystals....and later sun dogs. The wind was only about 5-10 mph, but constant, and man at -18F out there in the open, the cold will find its way through any opening in the clothing. I had my jacket on, face mask, stocking cap, and a hood up, yet it was finding a way to a point in the back of my neck. Shooting in twilight like that sucks, because twilight good shooting only lasts so long, so you want to stay out there even if it hurts. I actually have a lot of shots from here that I should post, but I'm really behind on things as it is. Maybe some of the others will wind up in the stock section. 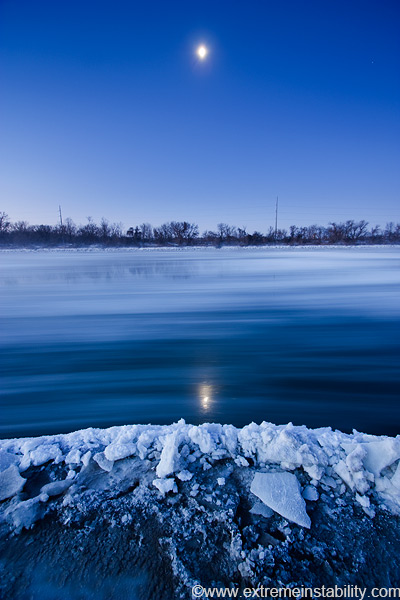 The ice edge on the river is probably a foot thick, I couldn't tell for certain. I still wasn't tempted enough to go stand on it. 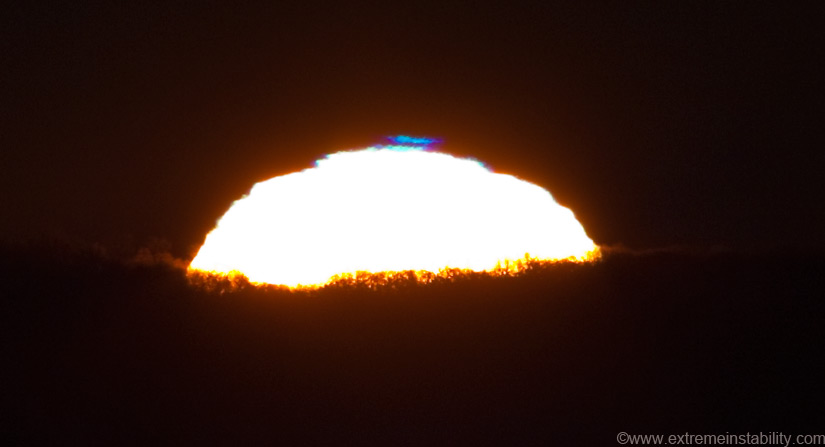 Sunrise same morning and got a blue flash. Sun was far too bright to see this happen with your eyes. I mounted the camera and set the shutter to 1/4000th at about F10 or something....100 ISO. I then watched the live view on the LCD. When it does it, it doesn't do it very long. At least not like I was viewing it. I guess you are supposed to view things from a hill or at sea. I'm actually flat here waiting for it to come up over the bluffs over there.