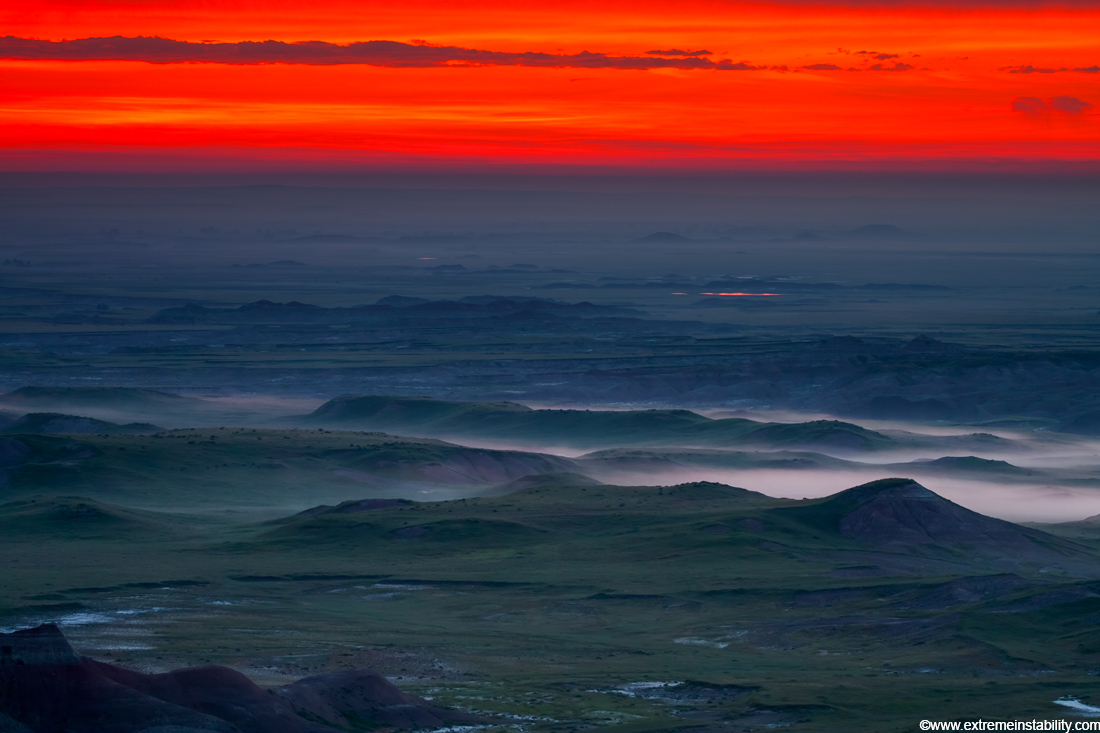 (I deleted the rest of this account about the trip and am leaving up the fog storm for obvious reasons. The rest of the trip just not that interesting) Being here for sunrise after being up most of the night messing with night shots was tough. But what a sunrise it was. Nothing compared to the "fog storm" that was about to happen. 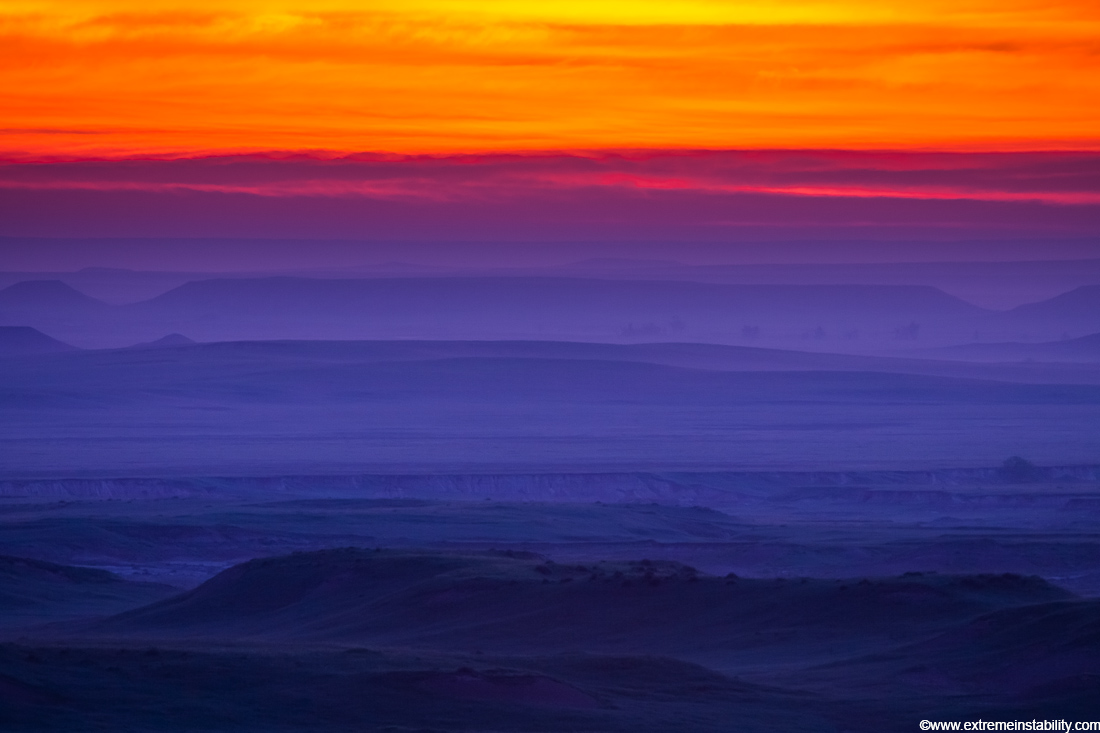 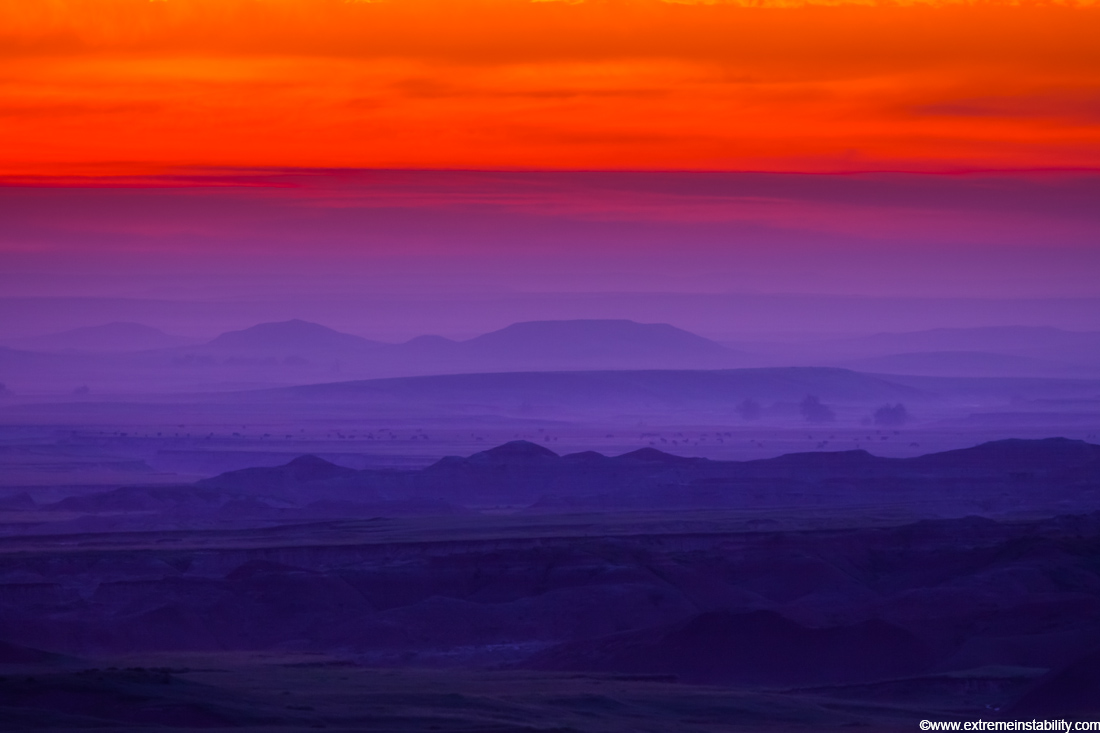 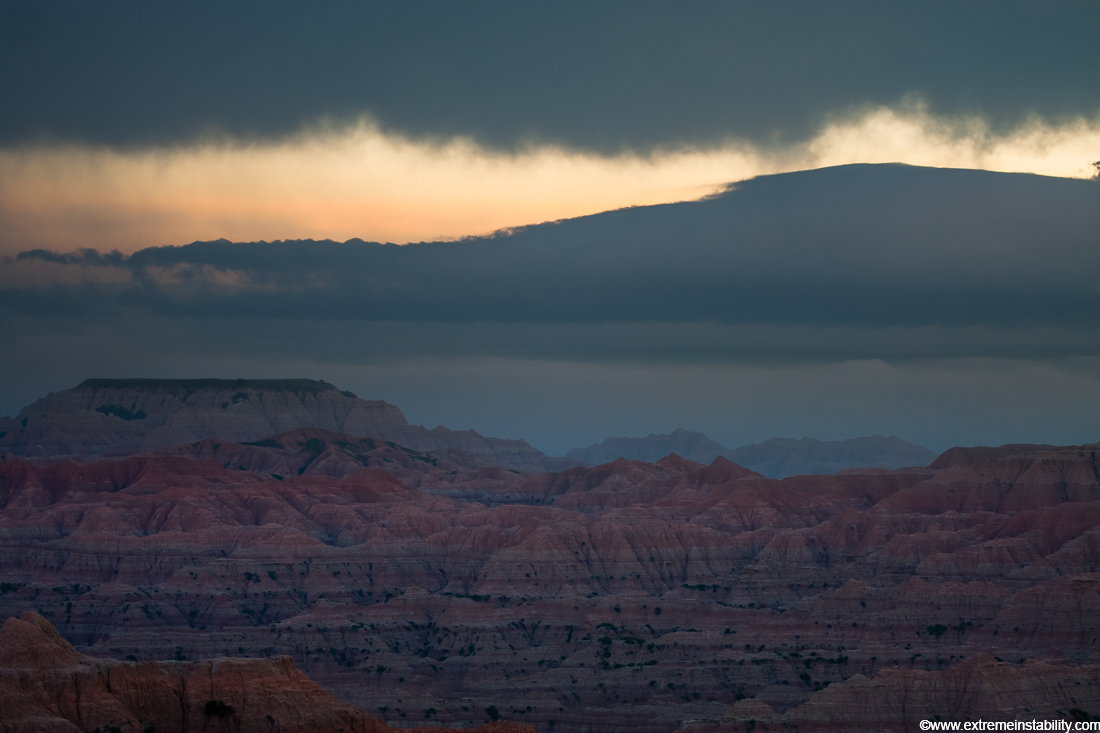 I noticed some really thick fog to the nw, apparently moving southeast. I thought cool, that will help thicken up my fog a little. This is looking nw, the relatively brighter sky is blowing out. It's still not bright out, as the sun just rose, and is back behind clouds.

As if the landscape and foggy scene weren't cool already, I spotted these Bighorn Sheep walking along the cliffs! I'm between Pinnacles Overlook and the switchback curve of death, parked on the skinny shoulder here. I ran over to the edge and down a bit to get the Bighorns with the fog. The camera is mounted with the 100-400L on. I made sure to look for rattlesnakes first! They have signs all over warning of them. And here I am doing it in sandals.

It blows my mind where these things walk. The shutter was a couple seconds long to get the scene, so if they were walking, they'd blur. Finally I'd make a clicking noise before each shot, as that would get them to stop and look long enough to not blur.

For a second imagine having hooves. I have hands and feet and no way in hell would you catch me in the places they frequent. I can't imagine that with hooves. 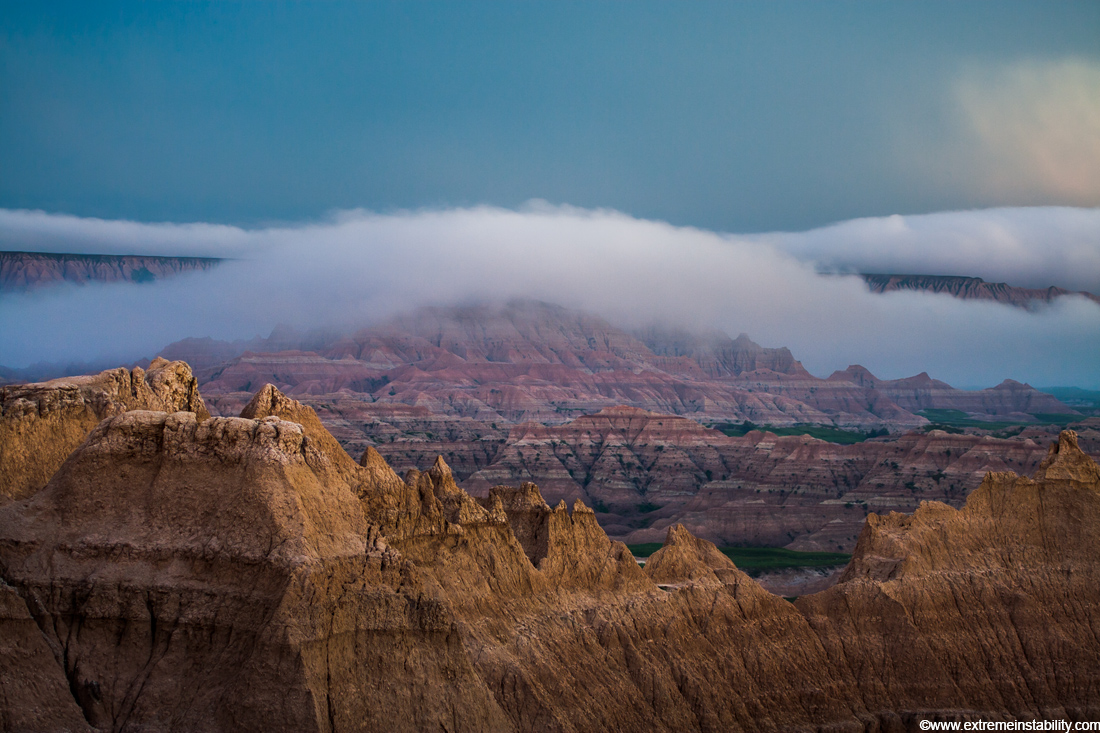 Boy, and I thought the low lying fog from Murray Hill in western Iowa ruled. This was several times cooler. 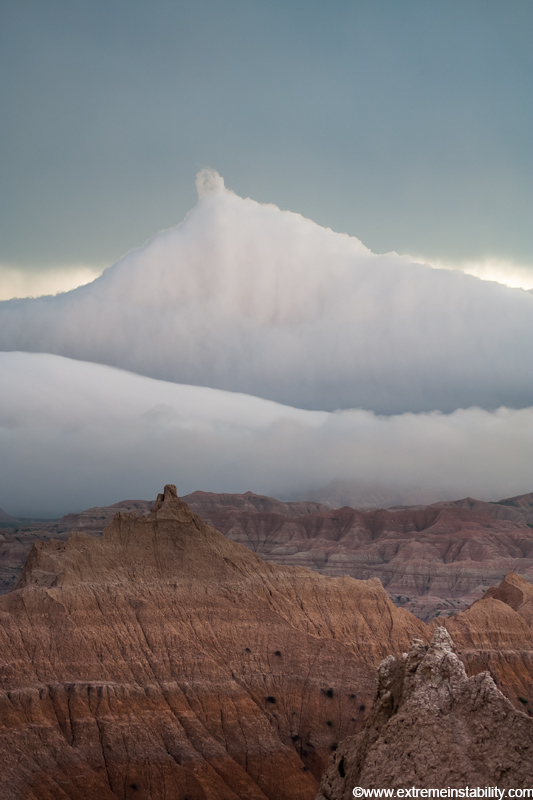 For a second imagine a long day of driving followed by climbing all over rocks into the early morning hours, then 2 hours of sleep, a cool foggy sunrise....and now this is starting to happen. I watched this thing climb up and up, wondering what the hell! After a bit you can't help but wonder if you are really awake. 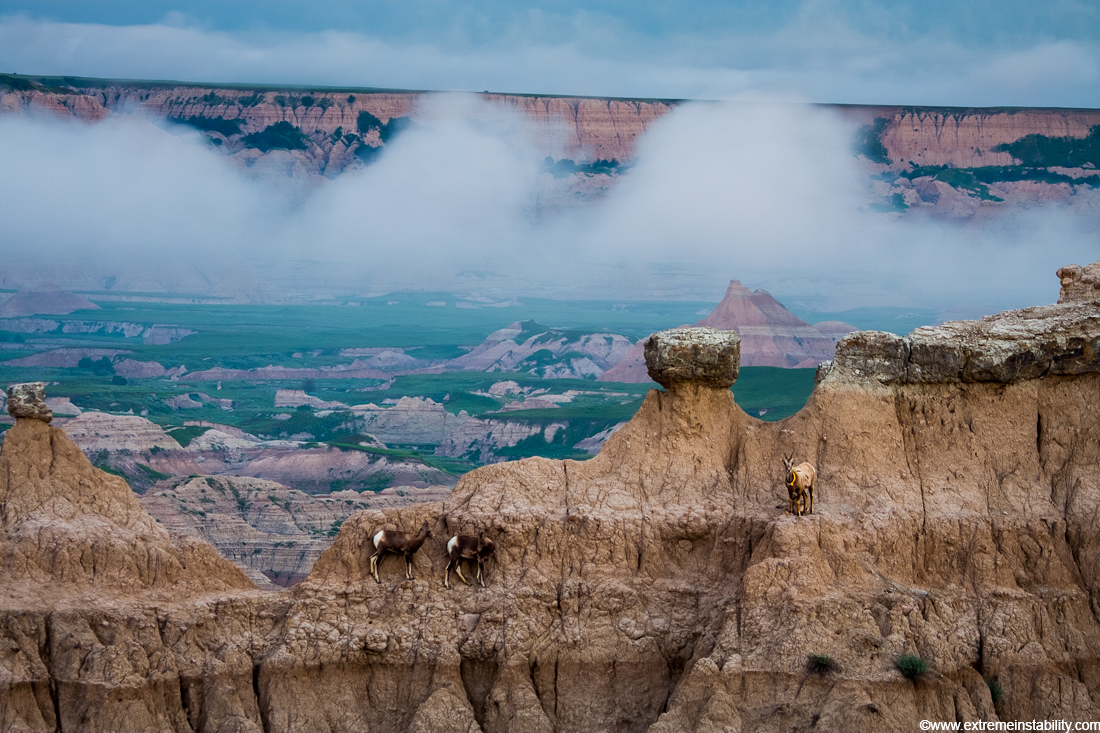 Back to the Bighorns. Look what they are walking on! Is this "going out to dinner" for them or something? Is the floor of the place "what is in the fridge"? "Hey honey, we're going out for sizzler today". The grass up on top must be the good stuff. I can't convince myself more agile prey can't get them up there. I know they sure as hell weren't sensing what was about to hit the area! If they are anywhere I would not want to be in the next 10 minutes or so, that is it! Skinny skinny ledge, deathly high above the floor, is not where to be in zero visibity and high winds. I hope they didn't get spooked and stayed put till it was over. 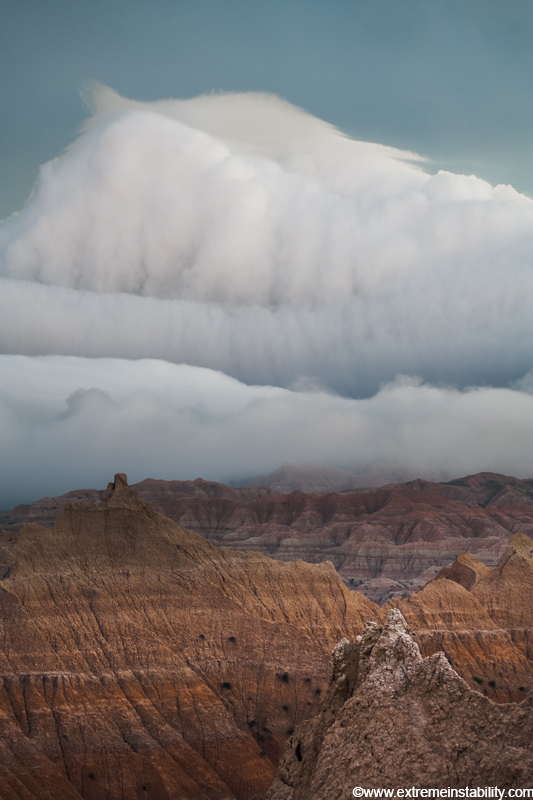 Bighorns must have bad eyes. For any Bighorns that might be reading this. If you see the above, don't climb up to skinny ledges. 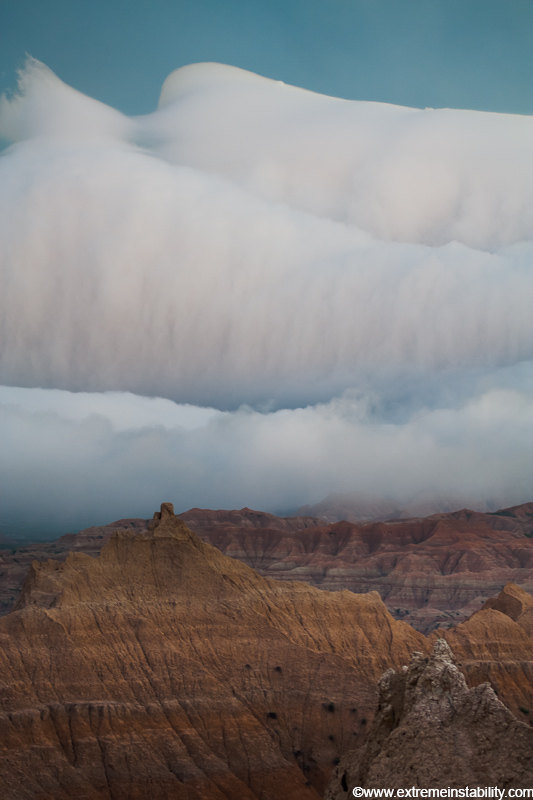 About now I'm saying "dude" and "holy cow" way too frequently. The front sides looked like they were carved by the cliffs as they went up. I'm sure they get their share of foggy scenes here(though it's pretty dry out there most of the time). I am doubting conditions come together to do this very often. It was very moist, it got cool overnight, there was some severe storm moving se, dragging some apparently intense outflow with it. Also on the radar loop I noticed something. There appears to be a band going se-nw that was pushed northward out from the storms. So imagine that pushing north. The area along I90 is flat, it then slopes down into this terrain. So south winds would be uploping here. Now also consider there was a good nw wind coming south behind this small, but fast moving complex. That cooler nw wind was blowing all the fog south, I could watch it happening. I think the two differing flows were converging right here at that time. It would make a lot of sense in how that is forming like that. 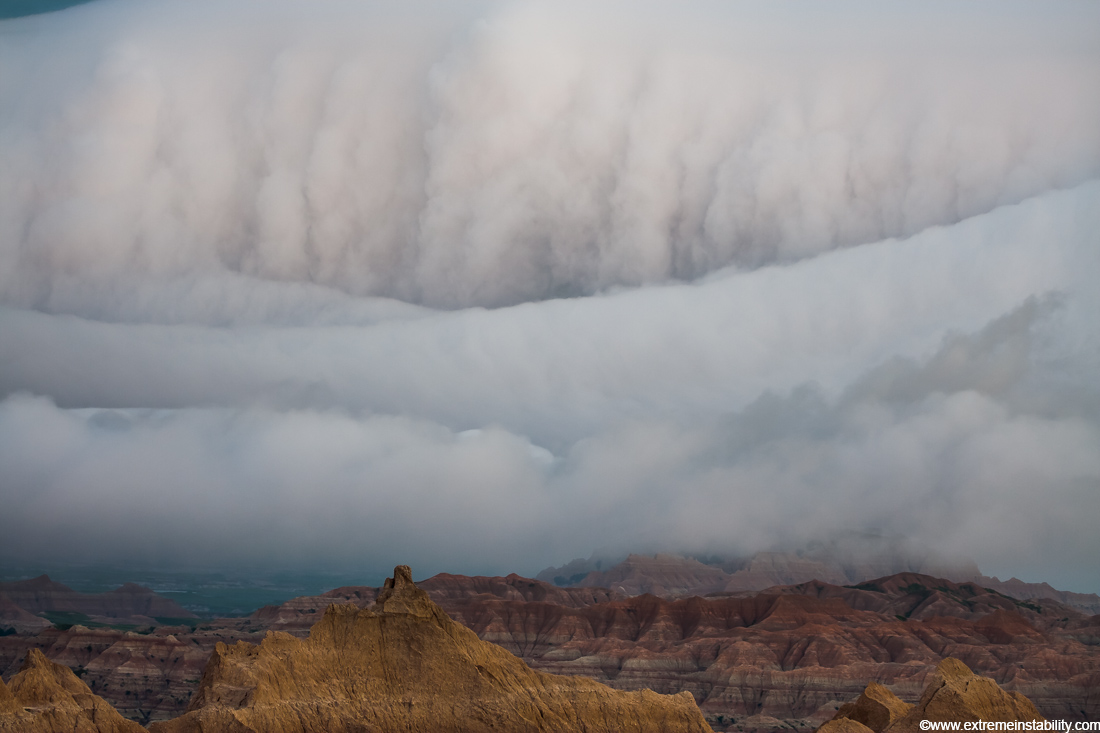 Simply one of the coolest things I've ever seen. I briefly grabbed the video camera, just so I'd have some proof other than stills if people didn't believe it. I so wish I had mounted it on a tripod and continued taking stills. There wasn't much time to do that though. Instead I continue the stills until it hits me. I then shoot video of it hitting. 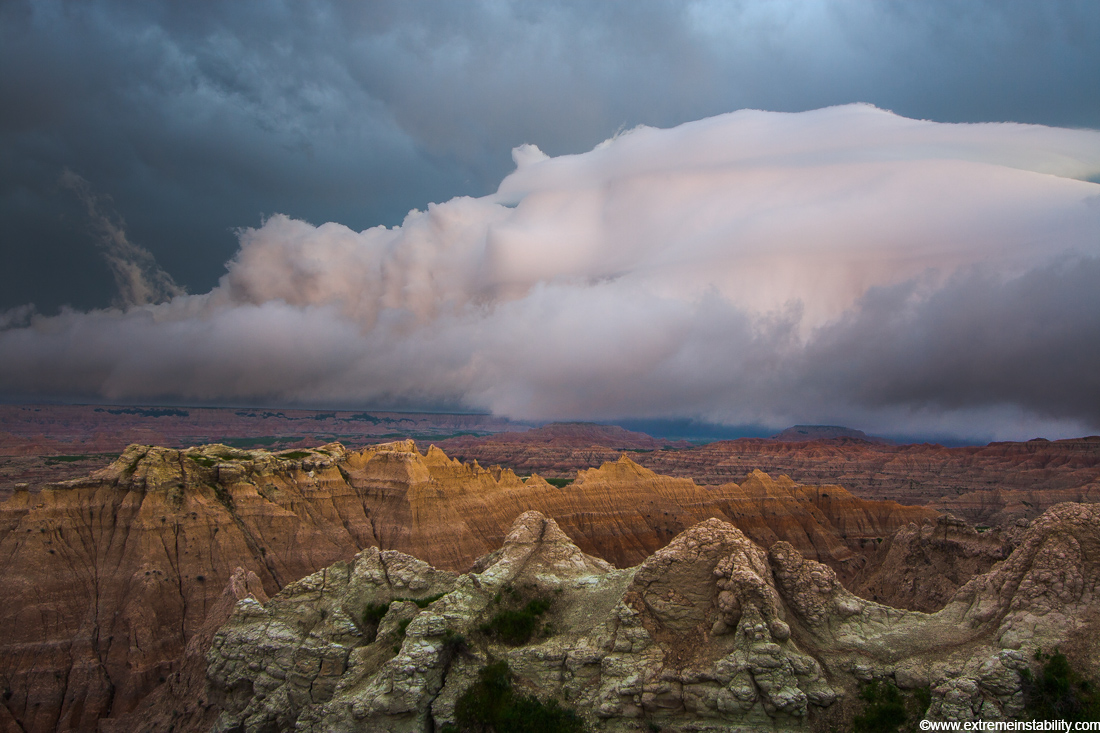 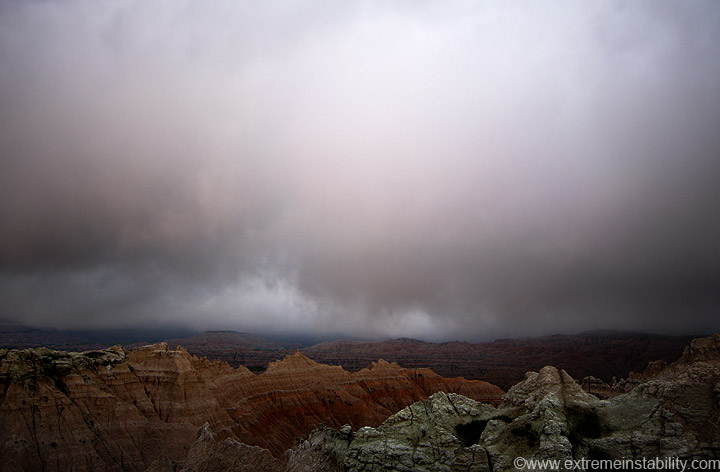 Those lead low clouds have blocked out the top portion. They are hauling ass now. 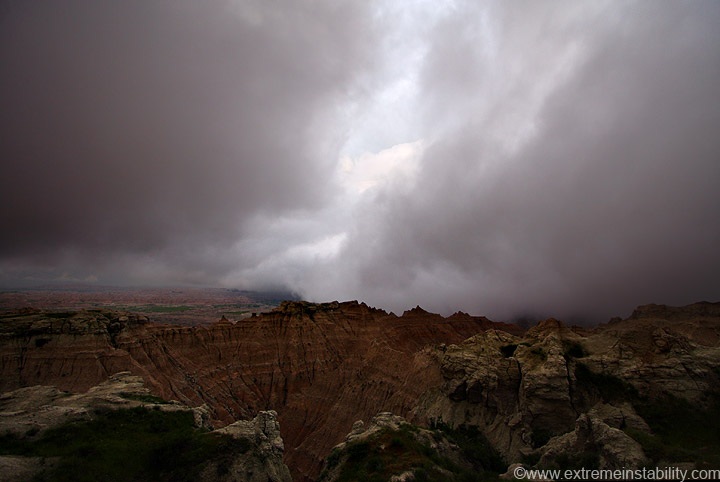 I now have the video going. I see the clouds break a bit and there's the big wall up above yet. It was so cool looking. I put the video camera in my left hand and snap this picture with the still in the right. The wall is in the center towards the middle-top. The clouds at rock/ground level were FLYING. It was impressive as it hit. Winds had to be 60mph or more. Those clouds on the ground were racing over the cliffs just east of me. I leaned up against my car and shot video of them best I could. It's hard to focus on the video at the time, so it moves around a lot. You get the point with it though. I'll post it on here.

Here is the youTube clip of the fog storm.