I opt to give myself options by staying in the middle and head straight west down 91. As I get to 281 north of Grand Island, I see the storm firing out by McCook, with a few others around it. Also, there's the whole warm front and cu field in northern NE still, closer to me. Do I head south and west and hope the McCook storm continues forever, without it becoming a big mess before I get to it? Or do I head north? I thought, man, it would suck to head southwest, only for that to be crap by the time I get to it, and then miss something better north near where I was. So I head north towards O'Neill. The days I bite early, it usually doesn't work out as well as waiting on other targets. Or maybe it is close to even actually. I've just bitten early on early storms, only to miss much better ones later. I do the opposite now a lot though. Bite on stuff that ain't there yet and regret not going after the stuff that was.

SPC had an MD pointing to a specific location sw of O'Neill where they thought supercells would fire and interact with the warm front. Problem was, it just never seems to work well north of a bunch of convection, as in due north of it. I said screw that, and flew east, hoping a few of the cu along the warm front would fire that direction. Problem was they were right on the NE/SD border....as was the warm front. There's a thing called the Missouri river there(road option issues). Problem was, what side would they stay on if they fired. Bigger problem was, I learn highway 12 east of Niobrara was closed due to water over it. Great! That really only left driving all the way east, then north to Yankton. A few storms fire and one quickly produces a tornado near Springview SD. I was only about 10 minutes too late for that, which ain't bad considering the route and the fact it did this tornado so soon after it fired.

It's still tornado warned west of Yankton. I get into town and go nw to some highway west of town. I could see supercell structure, tending towards a line, but a big lowered something or other going around and around under the north side of the curl. It was hazy and maybe 3 miles to my nw. I thought, jeez, is that a big tornado??? Problem was it was moving east so dang fast, and only a couple muddy roads to try to take north...which would only leave me a brief view there anyway. So I flew the 4 miles back to Yankton and shot north. 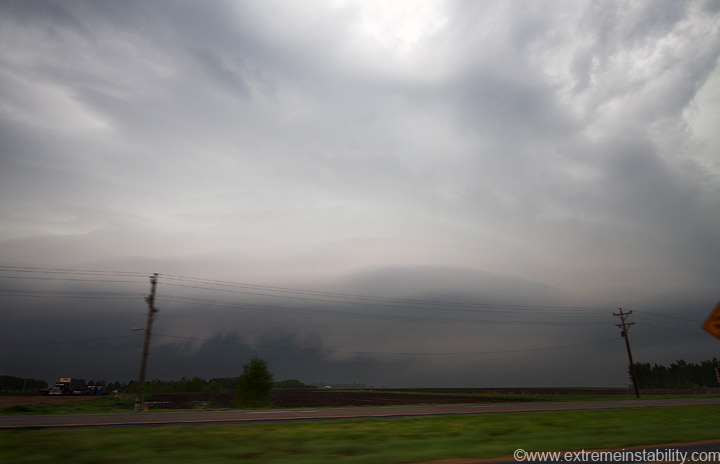 This was my view as I went north out of Yankton. It was really lining out to the sw already, but the north side you could tell was riding the warm front. The clouds were very low under that north, curling side and there was a bunch of thick haze about another mile or so up the road. 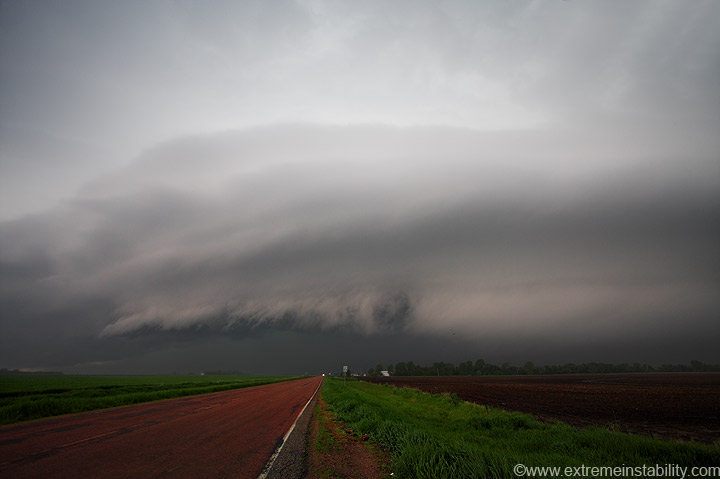 Looking straight west from the highway north of Yankton. You couldn't make out a ton of structure to the north of this view thanks to the haze. 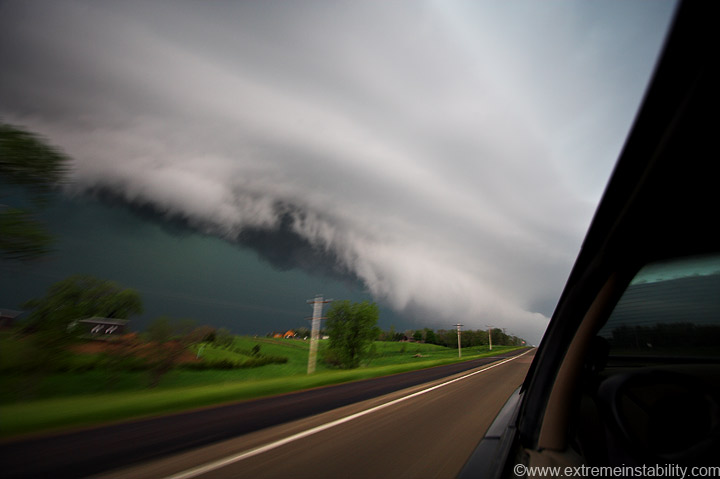 I was now simply thinking, great, a freaking line already. I figured I may as well stay/get ahead of it and hope it gets a big big shelf from hell or something. 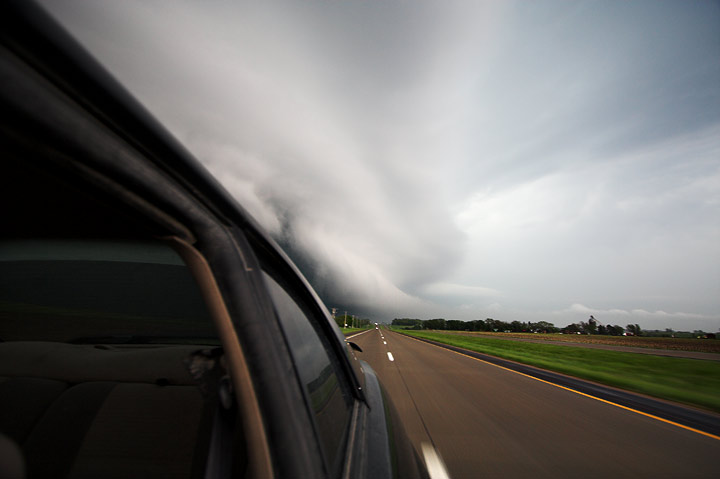 Don't ask me how I got this framed or leveled this well while driving 60 something south...or the next one. If you look above the treeline, on the right, you can see low clouds. Those mark the warm front really well. Believe it or not, this thing produces a multi-vortex tornado several minutes after this, to the east near Irene SD. I used to think big, cold, linear things wouldn't produce tornadoes. After 8-8-07 in MO(least I saw that one), 4-9-08 after Abilene TX, the Breckenridge tornado(that thing had the longest cold looking rfd/gust front forever and managed later), and this one(god there seems to be others).....I'm just going to chase something till the last rain drop has fallen. I used to feel I KNEW when something's chances of tornadoing where done. These super hard bowing things are pretty amazing to me, and going to get my attention a lot more in the future. Oh yeah, almost saw one do it near Ft. Dodge in Iowa last night too(6-7-08). That one reminded me a lot of 8-8-07 near Tarkio MO. At least the rfd cut and linear nature to things then.

I know this one produced that tornado since I've seen the video of it from another chaser. I'll mention down below when I think it was doing that. 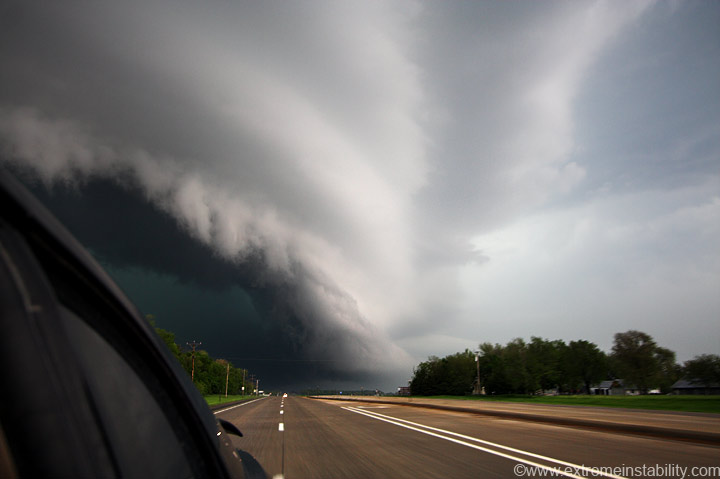 Anyway, still flying south towards Yankton. Had I honestly thought it had a chance in hell at tornadoing(that's a word by the way) I would have jumped up into the whatever sized hail and gone east with it. I didn't though, and was now just in big big shelf mode. 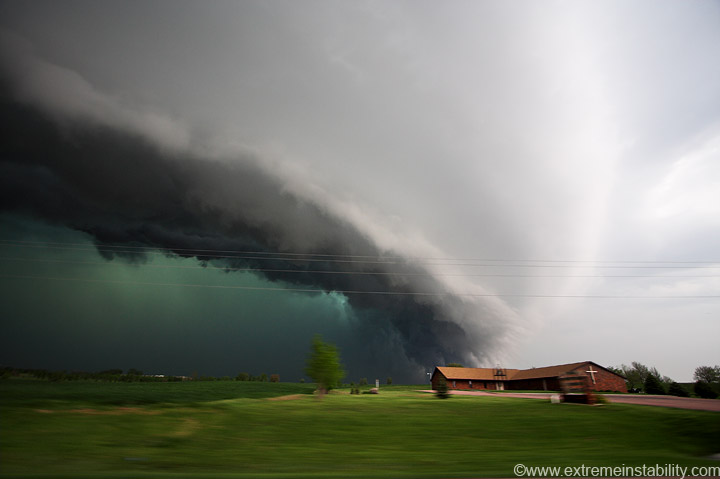 Going east on the north side of Yankton, taking a route that would wind through residential areas and slow me more than I thought it would. Hey look a church! Too bad this is surging east at 1 billion MPH and all I have time for are driving shots. 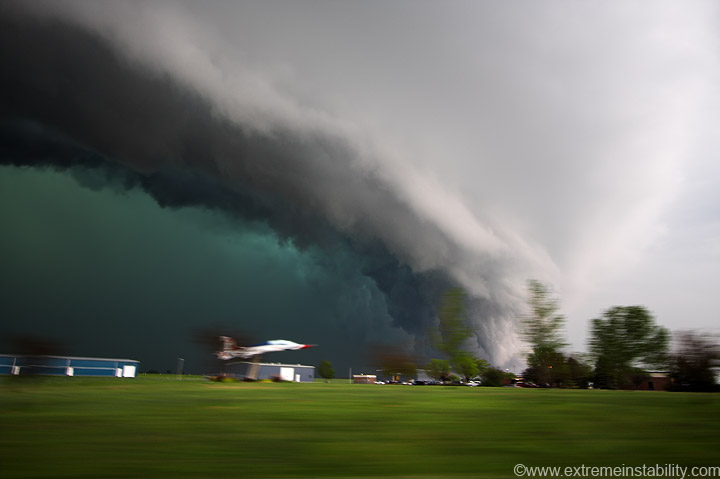 The jet is mounted....obviously! The shot isn't blurry either, it's the ground...lol. Not sure why, but when the storm/background isn't blurry, it seems like the shutter would have been fast enough to freeze the foreground more than that. Or it seems if the car motion still makes the ground blur that much, then there should be some bounce or movement while taking the shot that makes the storm a little less sharp. Then again, that storm is doing mach 5 east now too. I was doing mach 4 apparently, as I wasn't gaining. The driving motion sort of adds to it all in a sense. I guess. 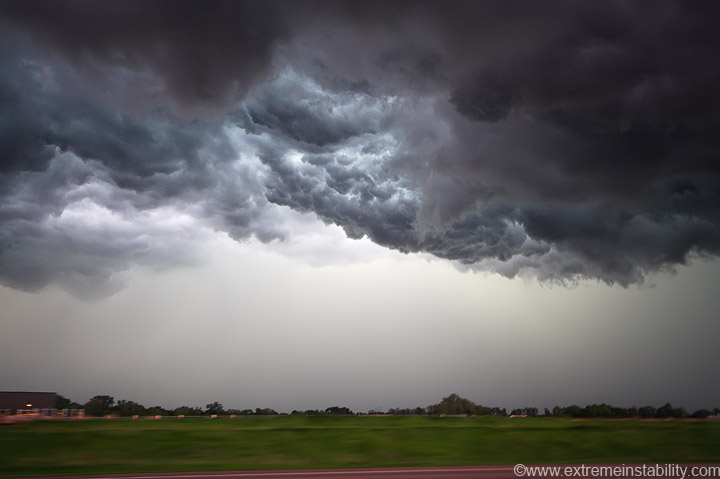 I love some of the contrast you can get in these seriously turbulent new shelf bottoms. Dark clouds mixed with some filtered light getting through. 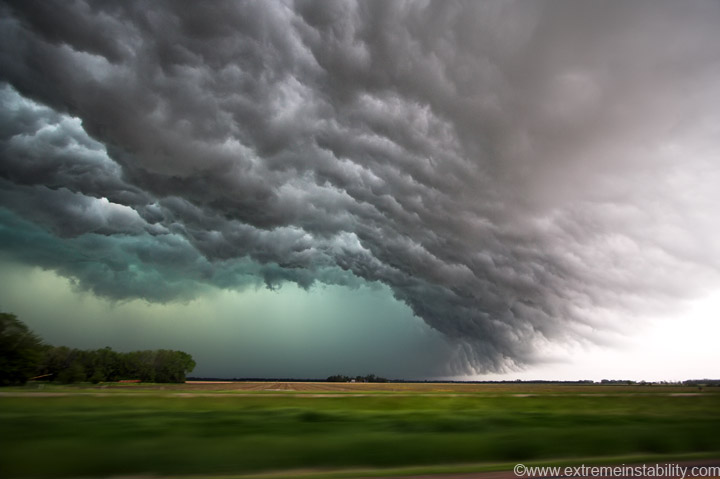 East of Yankton now, trying to gain ground again with an east highway.

Irene SD is only 8 miles east of Yankton/highway 81. The multi-vortex this thing produces has to be happening up in there now. It's for sure produced between this point and the one with the jet above. Chasers call these big "whale's mouth". You certainly don't think tornado when you are watching them. The punch with this thing was strong enough, it had to be curling back nw up in there and doing that tornado. Interesting anyway. 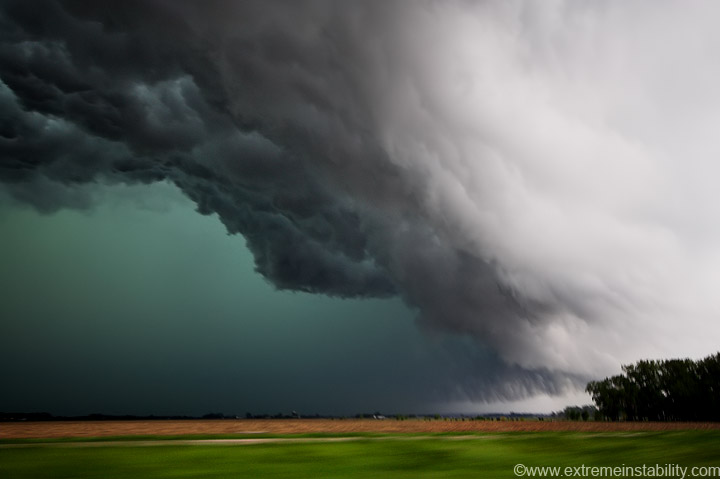 I've seen plenty of these shelf clouds/whales mouth before, but probably never one this low to the ground. Look way up in there closer to the right side. As you drove under the leading edge it seemed like you could reach out the window and grab the clouds. I would have tried, but I don't want to push my luck with them anymore this year than I have to. Seems had I touched them, then even this dispaly would vanish on me. 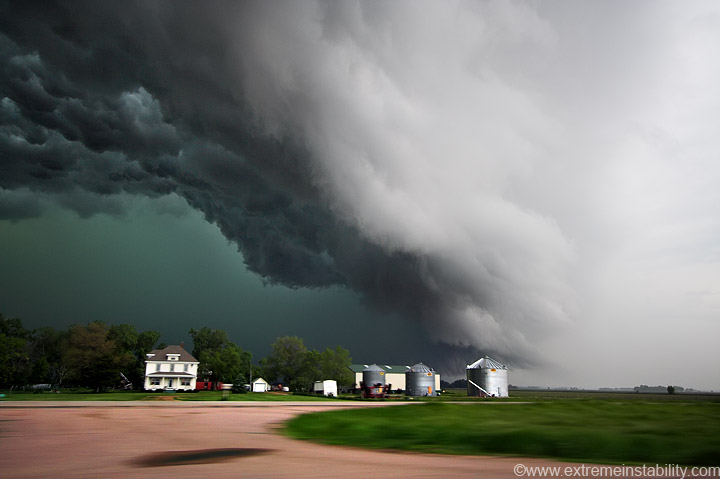 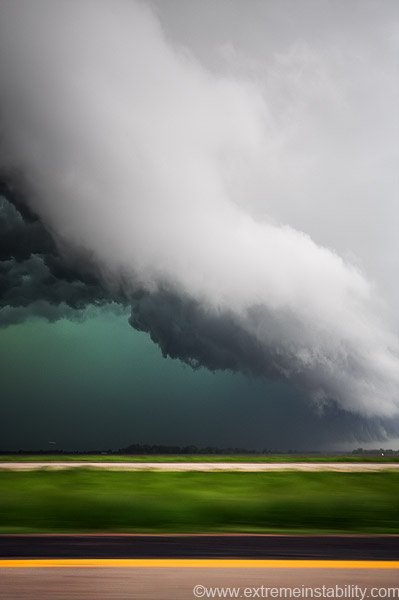 I just watched the video of the tornado this produced again, and I still shake my head. Not because I missed it, but just that it even happened up in there. Interesting things can happen near and north of the apex of such intense bowing. Short-lived weaker tornadoes are probably pretty common there actually.

Going back to earlier. Turns out that McCook storm cycled by itself all the way through Kearney, producing a tornado there, as well as severe wind damage east of there in Aurora. The biggest regret of the day(and year) was not being in northern KS just after the Kearney tornado, on that monster tornadic supercell down there. Structure of the year on that thing.....easy.