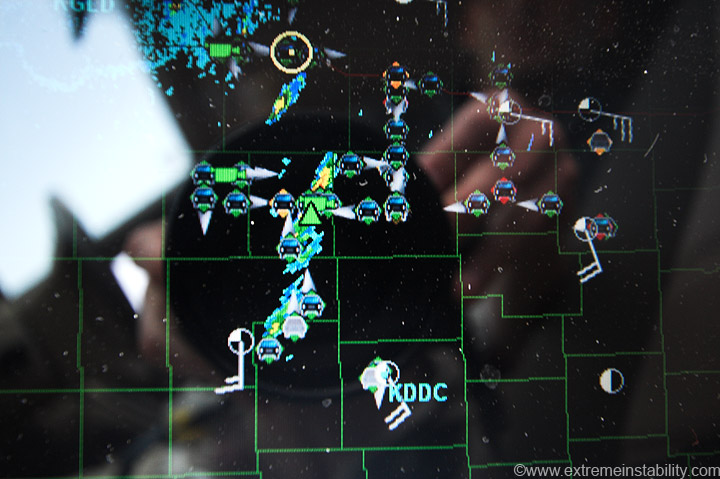 This setup looked nearly identical to the day before. So, it'd be wise to be north of the warm front and let the storm fire off the dryline. Then catch it as it crosses and produces wedge tornadoes(like the majority missed the day before, like myself). The above shows me doing just that, lol...or at least starting to. I took the picture just to show the chasers on spotter network. If you zoom in you see there are a lot more than this even shows. Plus of course you have about 5 times or more than this who aren't logged in using spotter network while they are chasing. Well I'm that circle with a dot in it at the top. I'm on I70 at Grainfield Kansas. The first storm has fired off the dryline south of the warm front. It's hard to see under the chaser icons. A person can't start the chase much better than where I was sitting for an hour. That storm and another would produce wedge tornadoes just east of where I was. 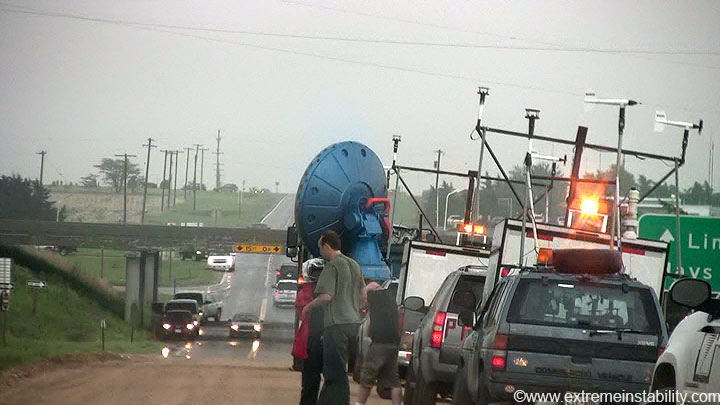 I had gone east, to the same exact location I was the day before. With the same damn condition....haze and rain. I about took that south paved road, I think south of Quinter, but too many others were already taking it. My plan was to use the interstate this day, as it seemed like it'd be harder to get blocked in by large chaser numbers somewhere. Sick of my rain and haze, I drive back to I70 and drive back west/northwest to try and look south. I'm greated with even worse visibility. Just fog and haze, no structure. And now, there were a bunch of chasers with the same idea.

I have a bad problem of not caring once I'm annoyed. I will know I'm going to miss something, but just get in a mood where I do not care. I did this May 29, 2004 in northern KS as I tried to punch that storm from the north and my gps stopped working, as well as data. Anyway, sick of the crap visibility, all the traffic and chasers on I70, I flip around and head east. Just as I do this, I see the storm go up right behind this one, and soon it attaches....JUST like they did the day before. The one behind the first goes nuts with a hook. I was, oh, 10 miles east at the most when I saw this start on radar. I thought to myself, yeah, that's going to wedge like yesterday. I then thought, I'm really stupid to keep going. But I was in that built up pisssed off mood by now and not thinking sanely. I was like, screw it, I don't care, and drove faster towards Wakeeney. I then blasted south towards a cell clear southwest of Dodge City. I could see there were hardly any chasers down there. It's strange, it's not so much the chaser numbers that get me either. It's more any frustrations leading up to that point, and the numbers just pushing the annoyance that much further. That's what gets me leaving an area I know I shouldn't be. 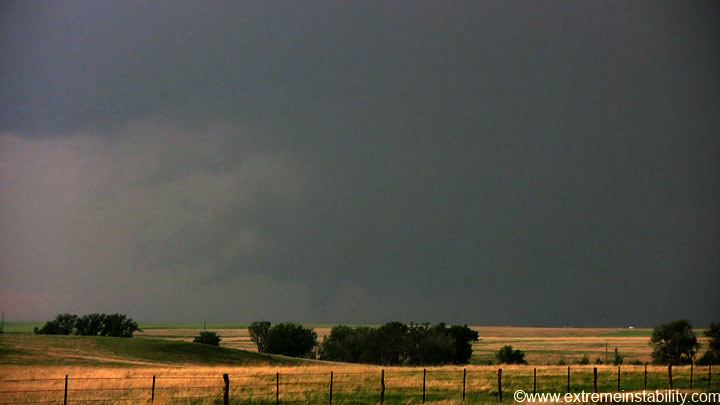 I saw a brief cone tornado well west of Jetmore. It's pretty hard to see in the above video capture. It was wrapped way back in an occlusion. 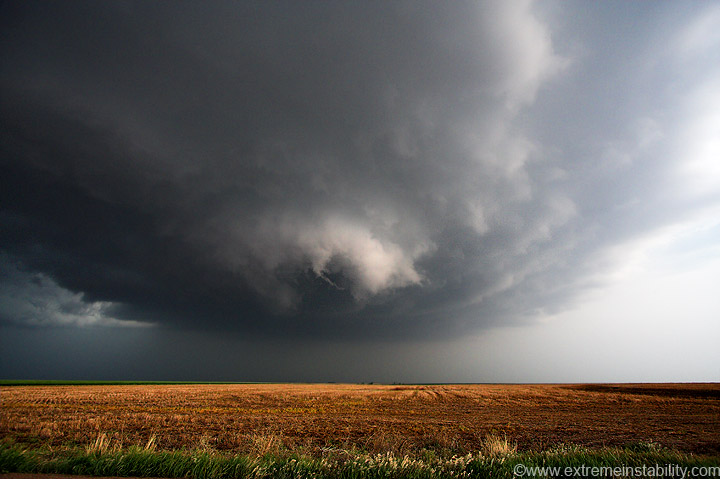 Oh yeah, I was shocked when I noted Dodge City's ob half way down here. I was like 61 TD!!? So of course the base was pretty high. I thought mid-upper 60s had already been in this area. This area ahead of the occluded area was really rotating and trying, but just too high. This storm looked classic on radar too. Sigh. I was supposed to miss those I70 wedges while catching others to the south, lol. 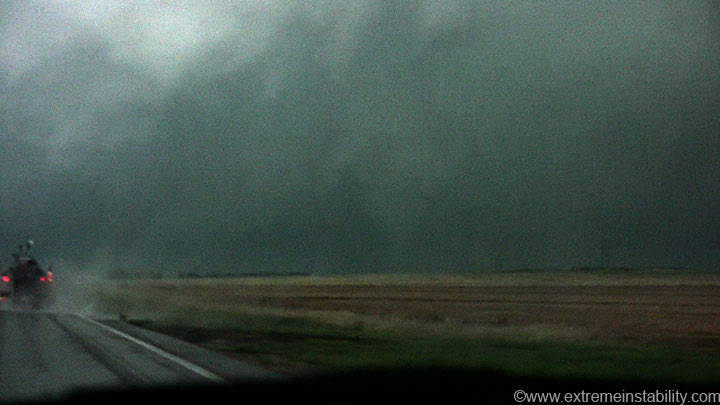 I tried chasing that storm northeast on gravel, but my gravel turned to a windy dirt road. With a storm blowing up south of it I had to turn back south. Had I not done so, I'd just be stuck on that dirt/mud road...that simple(driving a Mustang after all). That sucked. So back south for miles to get back to the highway west of Jetmore. Then east to Jetmore then north. I catch it again at Ness City. As I get into town the Tornado Intercept Vehicle beats me through the intersection. Then I go, and voila, I'm in their big convoy. This would actually happen again the next day in northeast NE. The TIV was not driving fast at all to begin, even as the above tornado touches down to the northeast(hard to see but it's there). I was like, why am I waiting on the TIV? Then we caught up with a train of more chasers. No use passing I thought. Lines of cars behind me didn't seem to mind passing lines of cars ahead of me up the incline though. Sure it was marked passing, since it was a slow incline, but not lines passing long lines. It was odd, I didn't care I was in a big ol convergence once again, likely because there was something worth looking at now. Wish I would have been less annoyed earlier and stuck around I70. I'd have my best tornado video ever had I done so. Sigh. 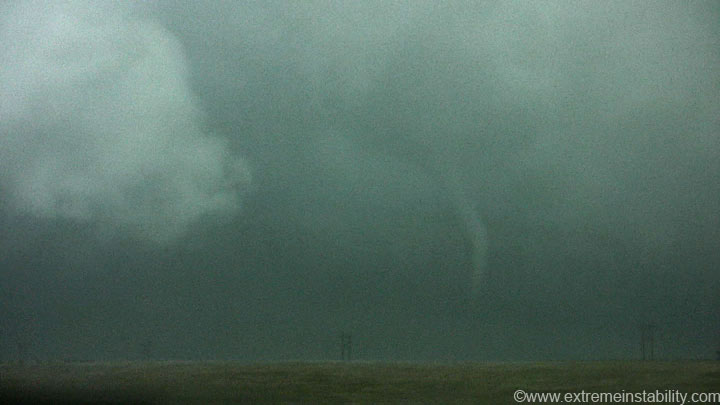 I'm pretty certain this is the same tornado roping out. This storm was huge at this point. It was just a massive horseshoe with convective clouds very near the ground in areas.

I end the chase after going east with the increasingly cold storm. I had a room booked in McCook so made the drive there. Not my best chasing these two days. I'm in a huge rut of bad decisions, even if I start well.