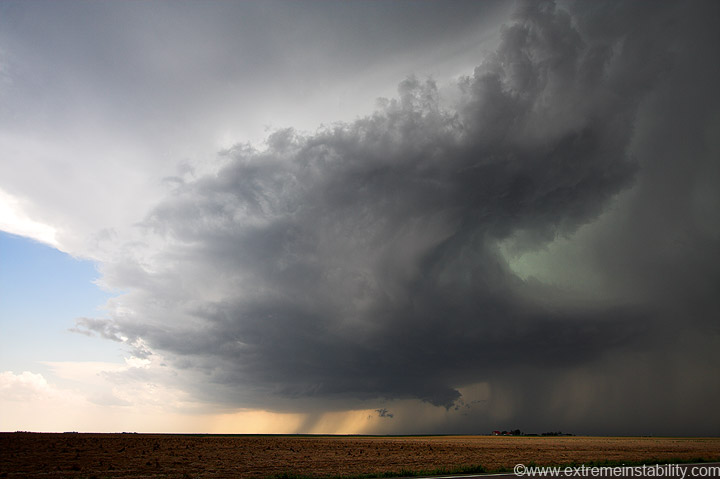 I'm not going to type a ton on the 22nd or 23rd, or at least I'm going to try not to. I'd just rather forget them both. Here is a high based supercell getting going near Healy Kansas. It crossed the highway so I head north up highway 23 to head it off near I70. 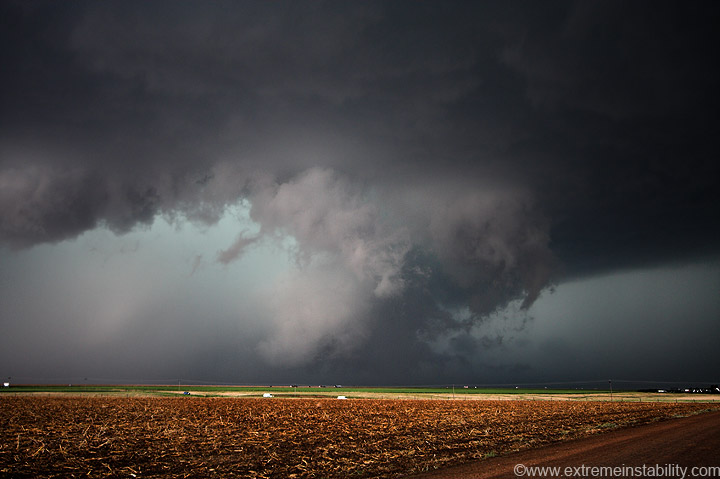 As it crossed I70 it attempted to produce, but from what I could tell did not get it done.

From this point on I just got annoyed with the number of chasers converging on the scene. This e-w gravel would soon be full of parked cars, as would the n-s section up at the intersection. Not just parked cars, but moving cars going all 4 directions. I usually don't mind a bunch of chasers on a storm, but sooner or later the number just gets too high for my liking. It was now there. I let the storm go north, ignoring the one that went up right behind it(which went on to produce numerous tornadoes) and headed south for another supercell.

After filling up I tried highway 23 again(to go south), but the southern storm was moving pretty fast and looked to be taking a pretty good hard right. I thought, ok, so I fly down there, punch in front of it, and see it for 2 minutes before I have to fly east and then north to I70. I figured I may as well flip around now and take I70 east to Wakeeney. So I did. Then the storm continues more north anyway. I go back west from Wakeeney to get right in its path. I could see a big wall of dust under a high based rfd/gust front. I could also see a wall of something in the "action area". I think it was just rain by that point. It was getting pretty old trying to look ssw at this storm and constantly being in rain on questionable road conditions. I decide to slip east to the next exit and look again. 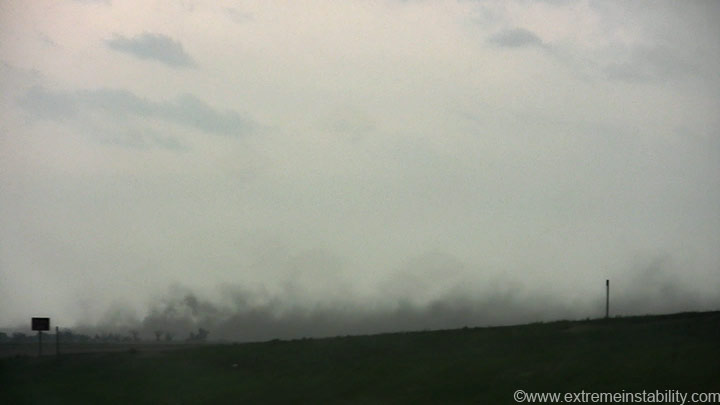 The inflow into this supercell going nuts was intense. That dirt is not rfd related, it's just a narrow area of inflow going east of the storm. Dust was just being lifted and racing west into the storm about to cross I70. 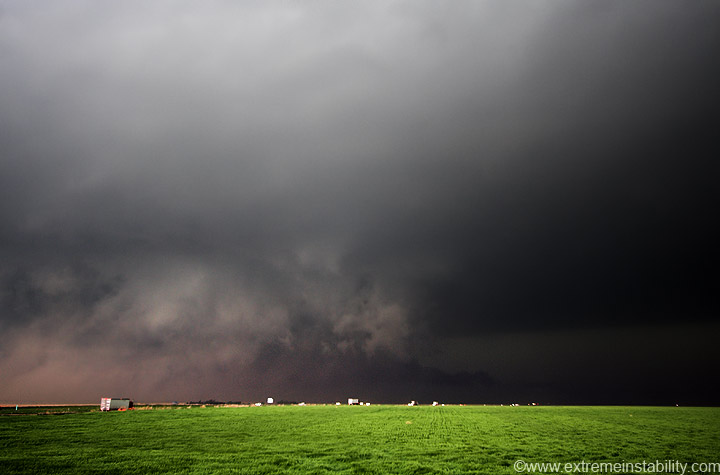 Note the low tail cloud in there at this point. 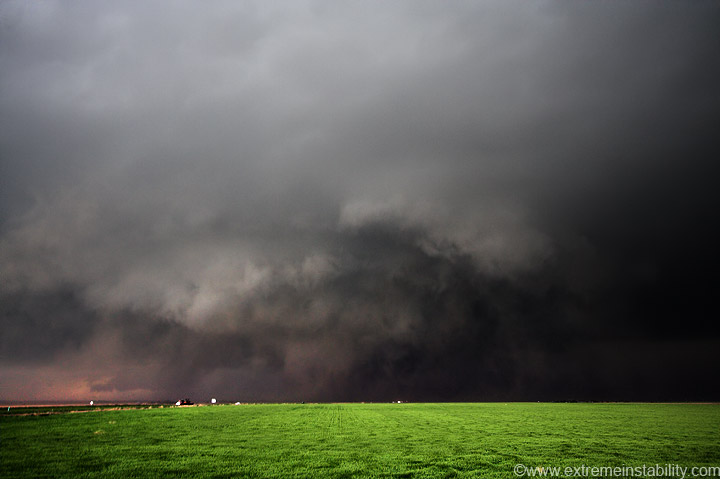 There was really intense dust motions going around the outside edge of the circulation. Some would appear to be dust vortices. I don't know what you'd call this whole thing, but it was pretty intense. 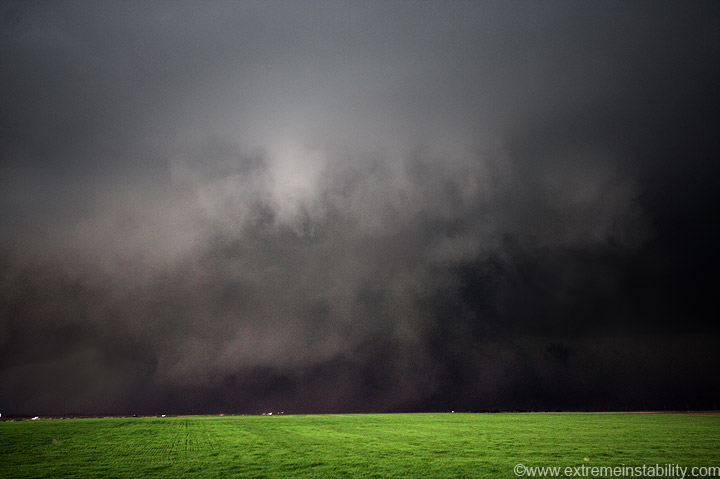 Here is a still from video as a brief flash lit it up. 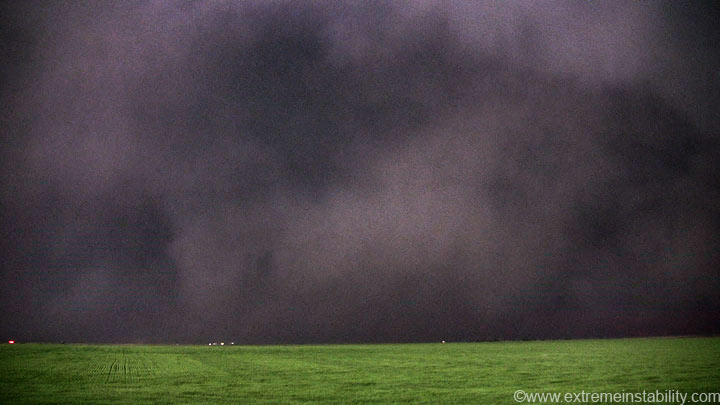 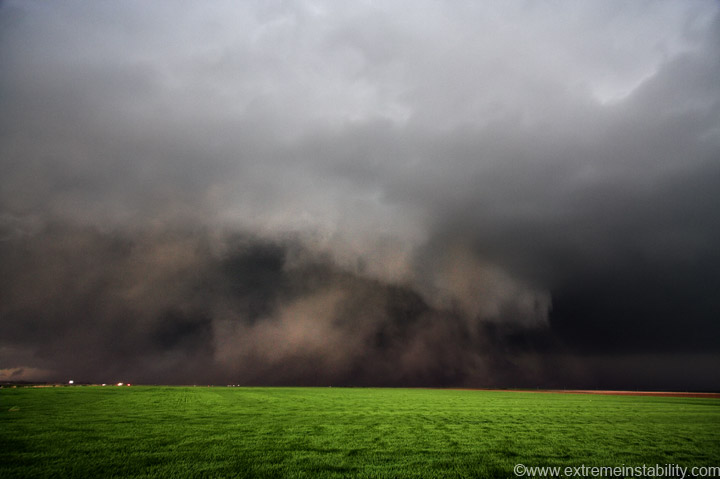 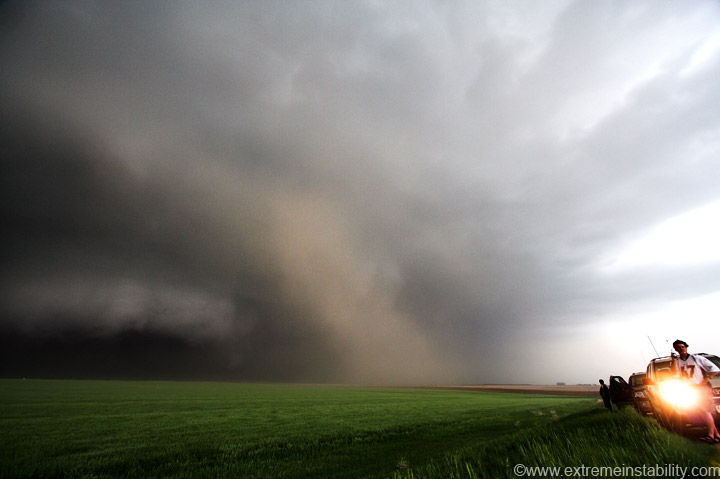 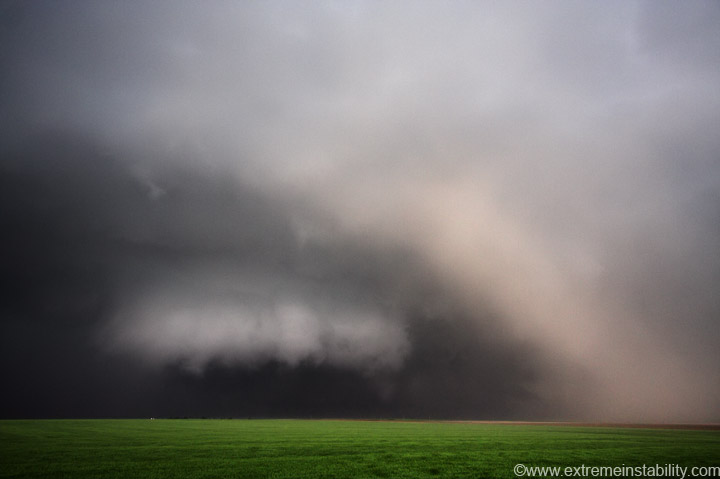 Others spotted a brief cone tornado at the tip of the circulation. I'd assume this is the same thing. 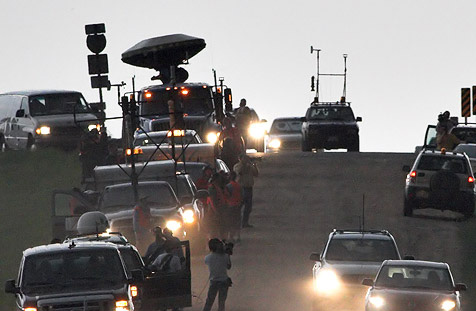 I'll just say this image doesn't even scratch the surface on the numbers chasing the storm. Hell half the above is just the Doppler on Wheels crew and Discovery Crew with them. It took a little waiting before I could drive back to the interstate(they're parked on/near the off ramp). Just cars and cars of chasers going north. This of course continues behind me at this time. Lots of others parked around behind me. I still haven't determined what the dude is doing bottom left. It's just a little nuts anymore, the numbers that are chasing. Consider there are numerous tour groups now, each having at least 2 vans. Then you have all the college teams, often using a couple vans. Other college teams using several cars. You have film crews going with different chasers for different shows. You have local cops and local spotters, and emergency people watching. Some tv station chasers. And the big majority like me, just chasers. Everyone is on their chase vacations this time of year, with lots making the trip from other countries. The roads around here weren't wonderful either, so everyone often winds up on the same ones. If I'm watching a good storm, I really don't notice it too much. If things aren't going well yet, it gets on my nerves, lol. Earlier on though, simply turning the car around seemed impossible. Some think it's great to park at the stop sign in intersections. So you have all 4 directions with parked cars, and all 4 directions with travelling cars...it can easily turn into a traffic jam.

Anyway, this storm soon got a nasty "cold" look to it, so I let it go north. I wander back to Wakeeney where I sit for about an hour. The dryline was popping off nothing but elevated crappers. I thought it'd be safe to head east to Hays where I had my room booked. Wrong. Not long after I got my room I saw the supercell that would produce a tornado practically in Wakeeney. That was really dumb on my part, but what's new. I should have sat there till dark and made sure nothing better fired off the dryline. I refuse to learn, lol.