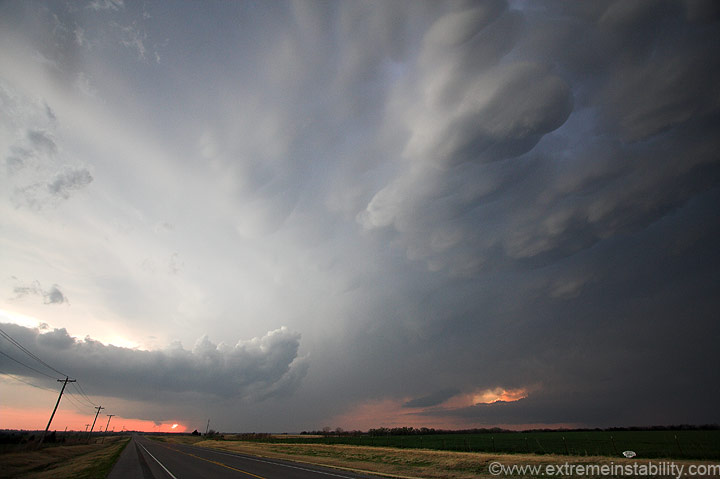 I'm super tired and behind on things, so this may be rushed a bit.

Left Blair around 9:30 and headed for south central KS or nw OK. I get to Alva OK, just nw of the triple point. I spent about an hour there screwing with the problematic laptop("yay" for vista). I've never had GR3, just the trial before. I got a new laptop and was going to buy it, but put another trial on first. Well it worked fine at home! Apparently the new Vista update screws it up. I never got it to work again. I then couldn't get java to download and work. It'd just sit there saying it might take a few moments. So I looped nothing all weekend basically lol. Well the ADDS satellite site worked fine. I then had my wifi card jump onto the motel nearby, which didn't work anyway. Lets just say it took me a long time to find where you disable that on Vista. I had to because it kept connecting to everything and screwing up my phone connection. Other than being new to Vista, and Vista problems, the laptop ran great! It's nice to finally have a brighter screen(at least till night, lol). I have to work on that thing before the next chase.

So an hour later I get it set up for what will get me by. I thought the triple point would be the spot, I was near it, but the latest satellite loop made it pretty clear sw OK would be it. So I dropped south. Towers began to erupt down there. I wasn't in a huge hurry the whole drive since the storms were struggling on radar so bad. I couldn't loop radar, but it looked like some splitting going on.

I get to I40 near Geary. I could have shot sw into the storms closer, but wanted to leave options open for the cell to the sw of the lead one. Two were beginning to dominate. I top off in Binger then head west of town. The lead storm was looking pretty good, though a little small and high based. In the above photo that lead cell is on the far right. The following cell to its sw is right above the road on the left. The problem with this is the western storm will tend to rain, or seed, the storm ahead of it. That's not good. It's always hard to know which to choose, as often the sw one will up and vanish. Not sure why, capped or sinking air behind the first....no real sure idea, I've just seen it enough. But the lead one seems to do worse more often than the back one. Inflow winds for the day likely make the difference. If it is strong the back storm can ingest some good air. If not, it might be trying to use the air from the lead cell too much. So anyway, I mostly opted for the west storm, but stopped where I could keep both options open. I'm stopped just west of Ft. Cobb in the first photo here. I would be at this location for an hour and a half. I park 1 mile north of the highway on a gravel road. Amazingly enough I didn't see a single chaser the whole time. I looked at spotter network earlier in the day to see how bad it would be and it looked pretty darn full of chasers, lol. May should be nuts. It's always nice to feel alone with a storm, or at least with few people. I like it as well with some friends as without, either's cool to me. I just can't stand it when you feel like you have to look at vehicles more than the storm while moving around. Seems that happens whenever you go to get closer. I got closer later and was surprised it wasn't too bad. Maybe 6 or 7 chasers parked on the shoulder or going by. It's only really annoying when there's nowhere to turn around or pull over and you are getting boxed in by chasers(as you yourself get in the way of others obviously). 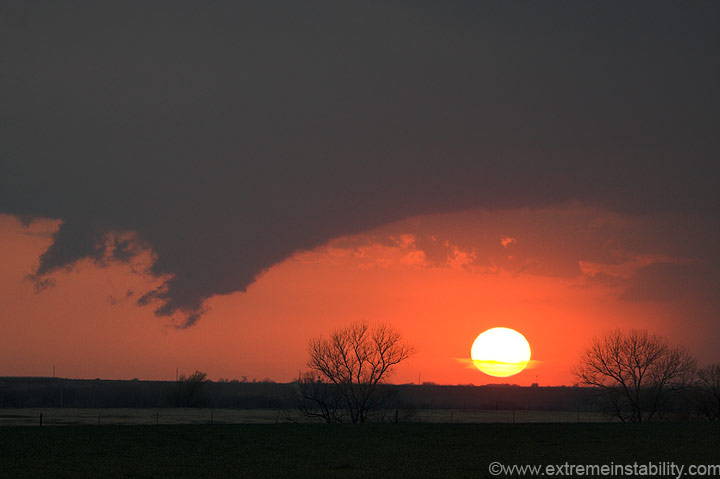 The western supercell was really trying now, but just a bit too high based, or more importantly probably, not getting enough shear yet. With that sun setting like that I was like, oh c'mon, figure out a way to tube. 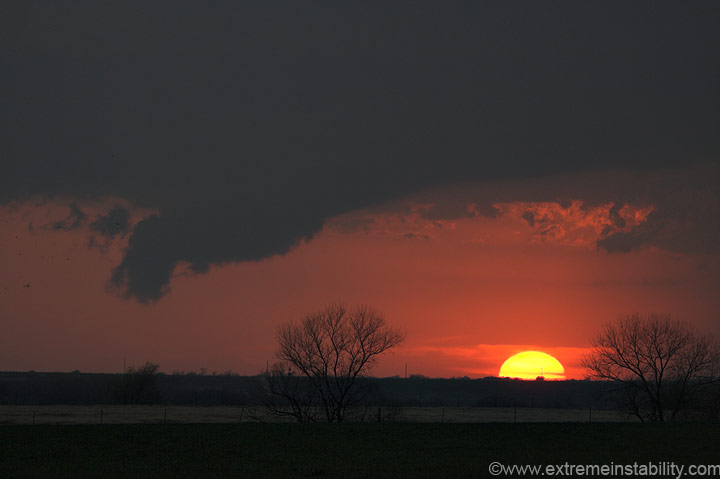 Would have made a cool picture if it was producing a tornado. 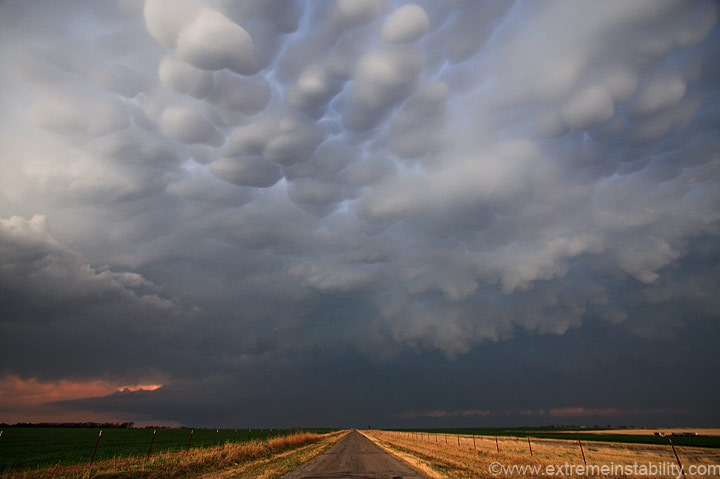 Big ol mammatus forming now. The view is north towards the lead supercell. 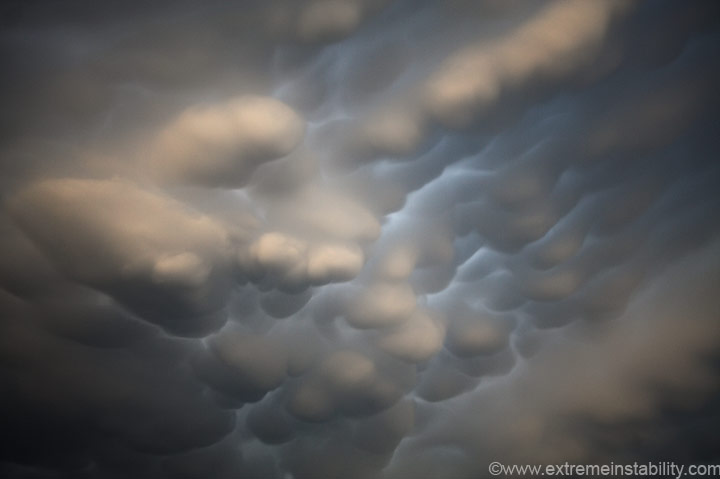 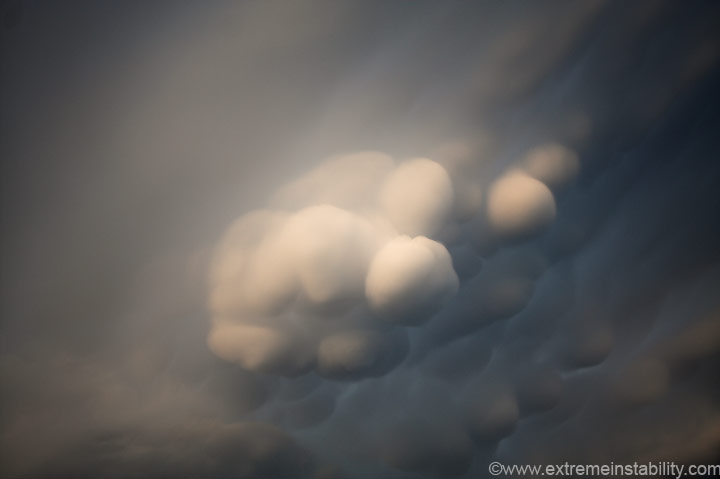 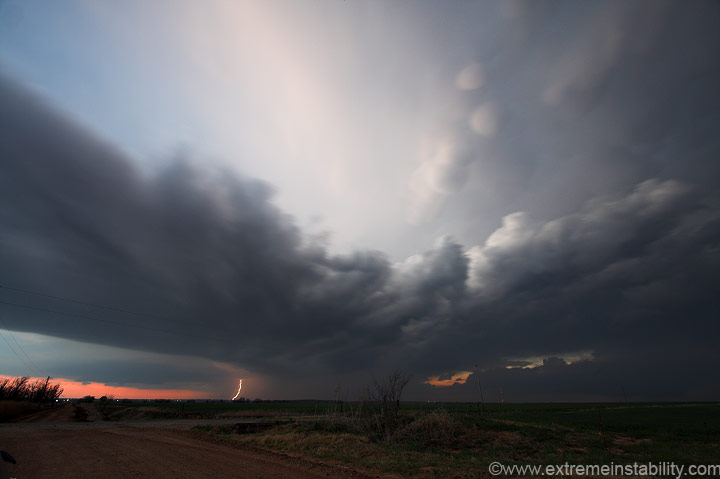 Still in the same spot. I couldn't see much of the western supercell thanks to constant clouds right ahead of it. It didn't look that great on radar still. I hoped it would offer some good twilight lightning ops, and it sure came through! The hardest part about chasing(other than deciding to leave home for a long drive in the first place) is deciding when to be on a storm and from where. At least with the 10mm lens I can be close and still get the whole thing in. The base of the supercell is just left of that bolt. 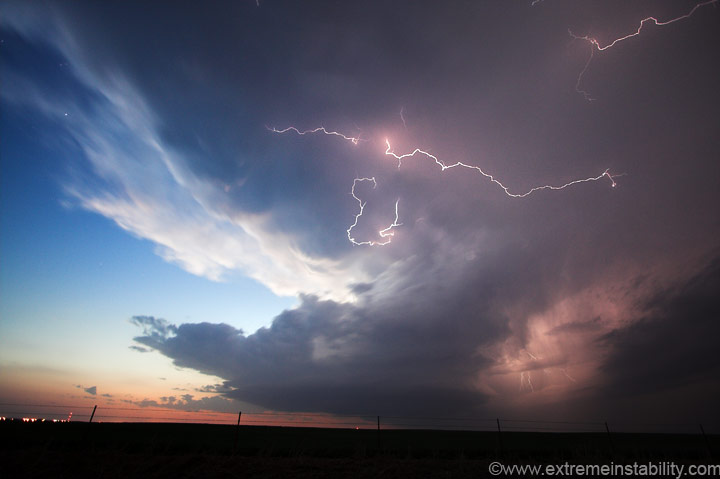 Low clouds finally lift out of the way and the show begins. Twilight rules. Mount the camera, open the aperture, put the shutter on bulb...then just change the ISO around to see what you need. Really simple stuff. 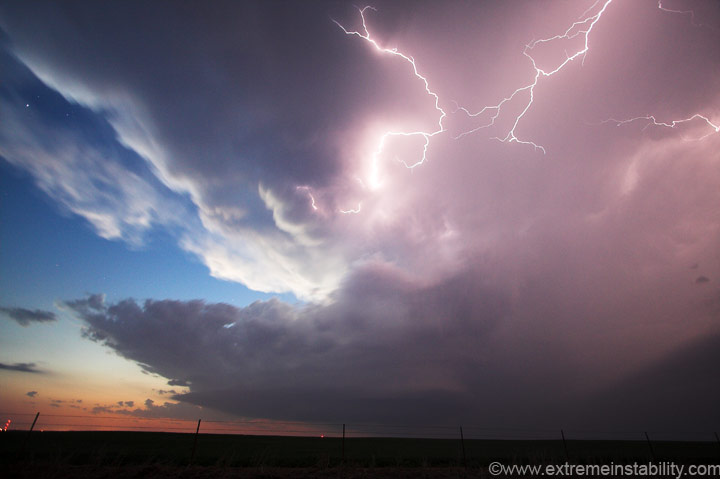 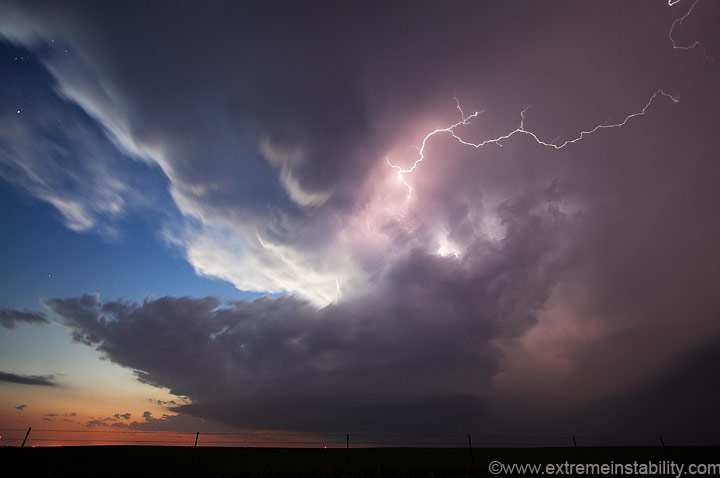 Most of these so far have needed 400 ISO and a few seconds. Problem was the updraft and anvil was changing position really quick, even if the storm was moving slowly east. 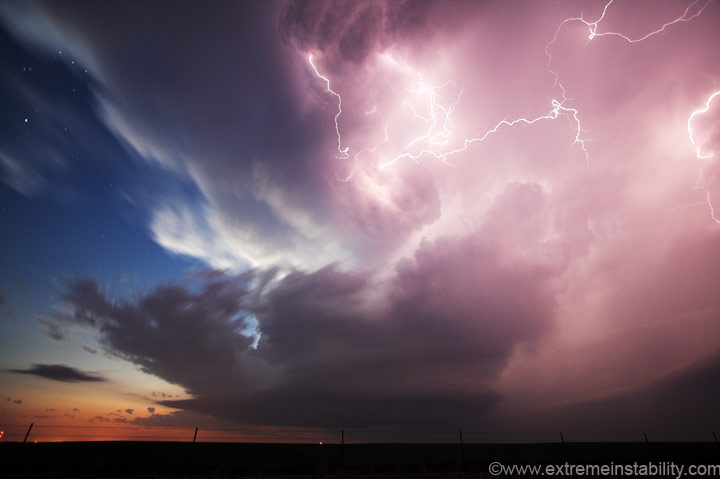 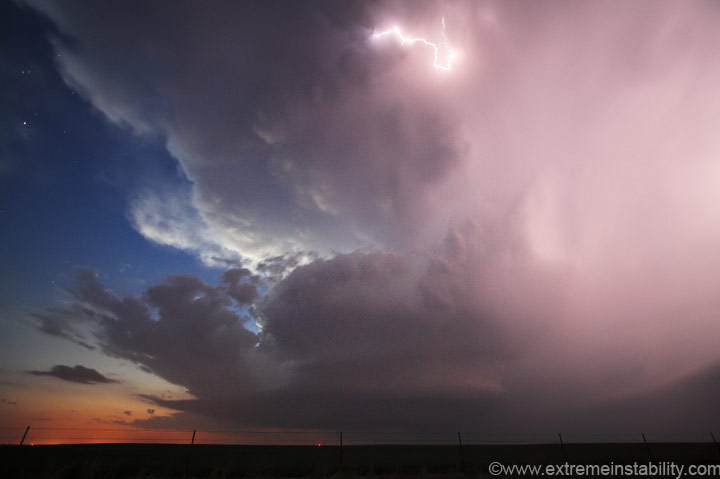 1600 ISO on this one just to try and freeze the storm structure a bit. Right about here it seemed to really begin its cranking. 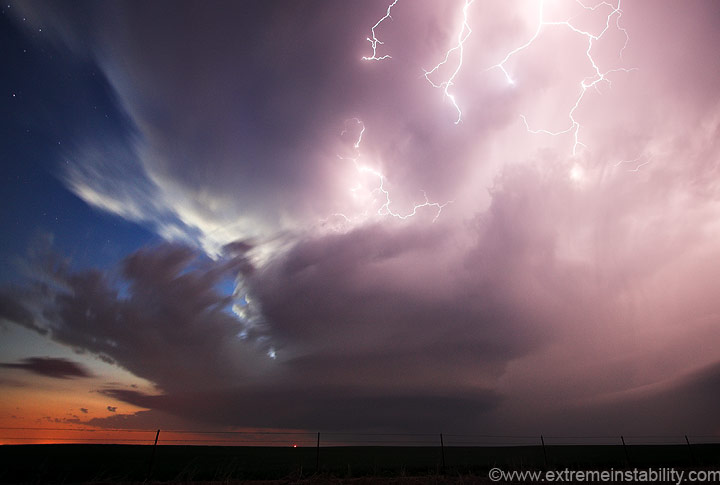 Lovely scene, stars, setting sun light, supercell, lighting and even an inflow cloud now. It was now rapidly making the drive from Nebraska worth it. 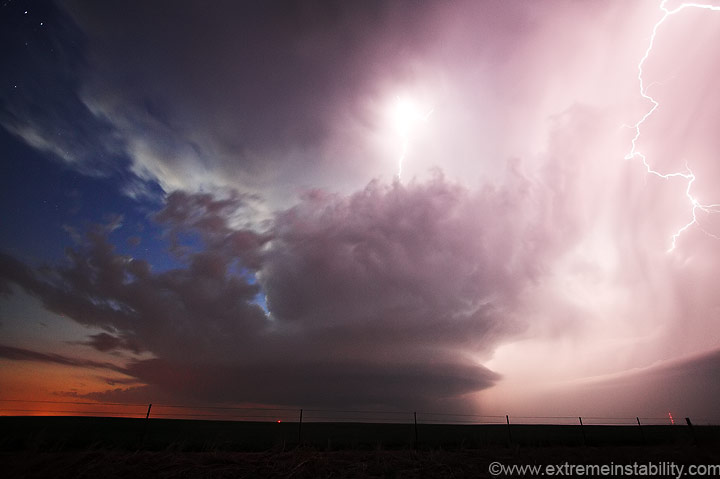 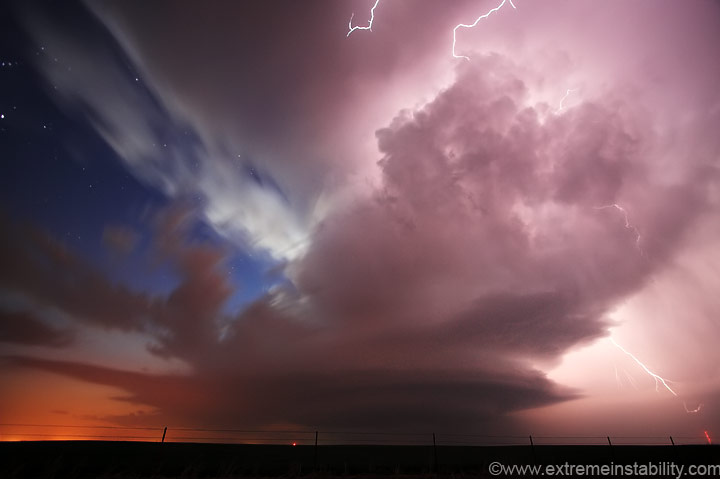 The storm might look like it's a ways off, but it's pretty close now. The photo was taken at 10mm. 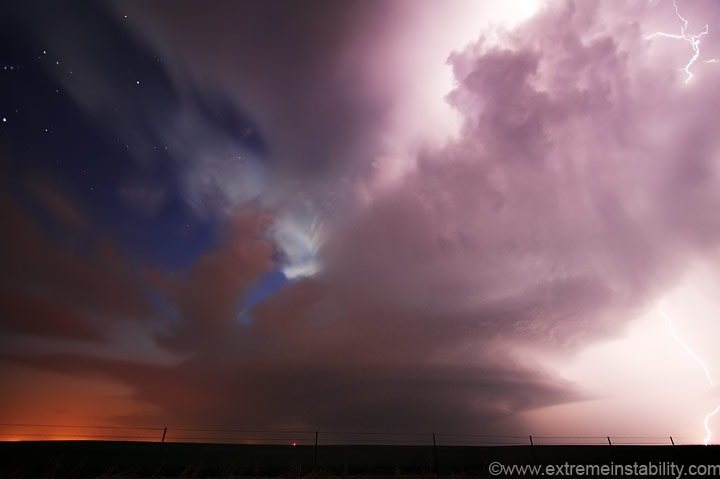 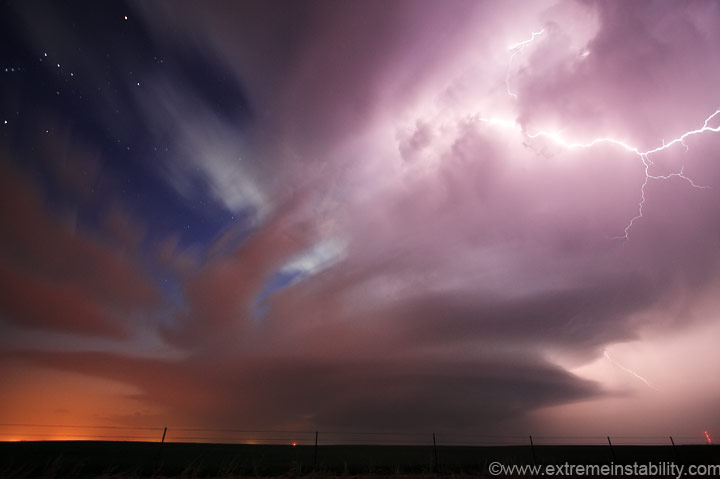 I'd switch to 100 ISO a few times and let the shutter go longer. You can almost see the cyclonic twisting in the above image. I think it was around a 60 second exposure. 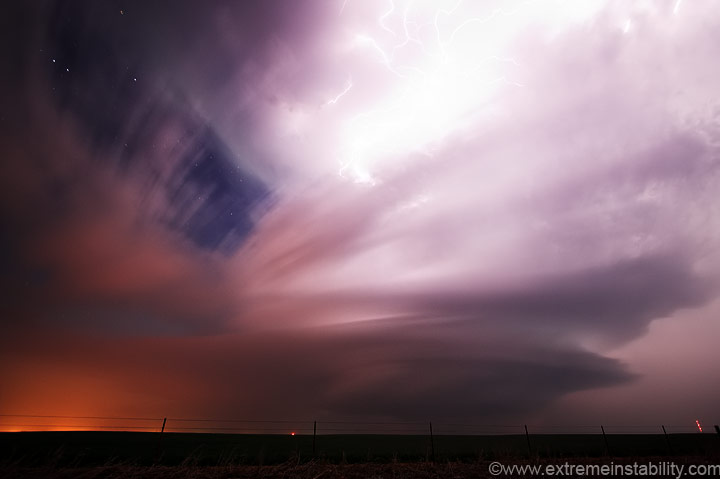 Or maybe this was the 60 second exposure. I'm too lazy to go look. City lights on those clouds to the left. The low level jet was forecast to increase significantly after dark. I think around now the winds began to pick up. In a bit they'd be flat our raging.

Check out that fast forming inflow cloud on the lower right! Stars still shining as the lighting really cranks out of the updraft. 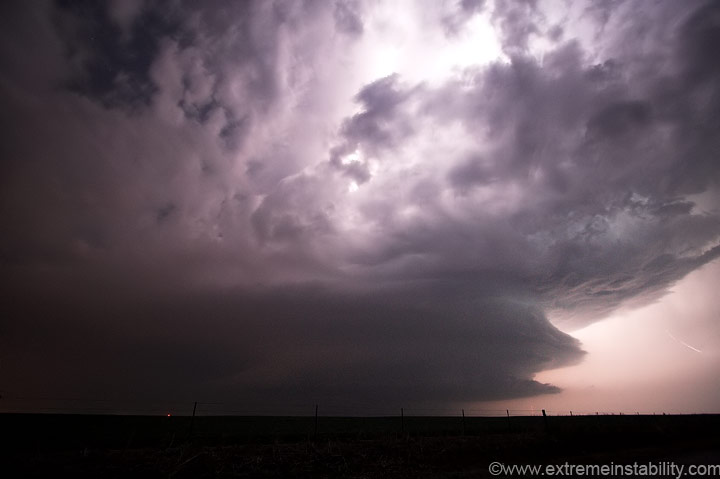 It's starting to pass just north of me so I move and face the car east. Problem was the damn winds blowing dirt north. I couldn't look north because dirt was coming back in my window, giving my contacts hell. 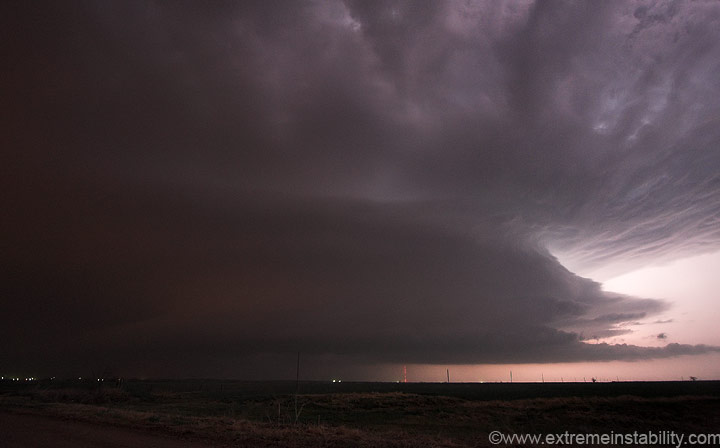 Storm growing and growing, drawing in serious inflow. Probably another 1600 ISO image above.

I moved east closer to Ft. Cobb and took a few more stills. Oh yeah, this has been tornado warned for a while at this point. 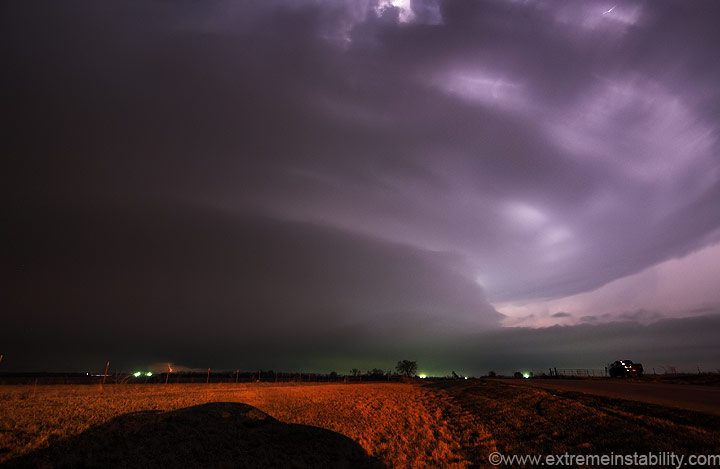 The structure started to make me think of images of the Greensburg storm. It now had two or three intense beaver tails on the east side. 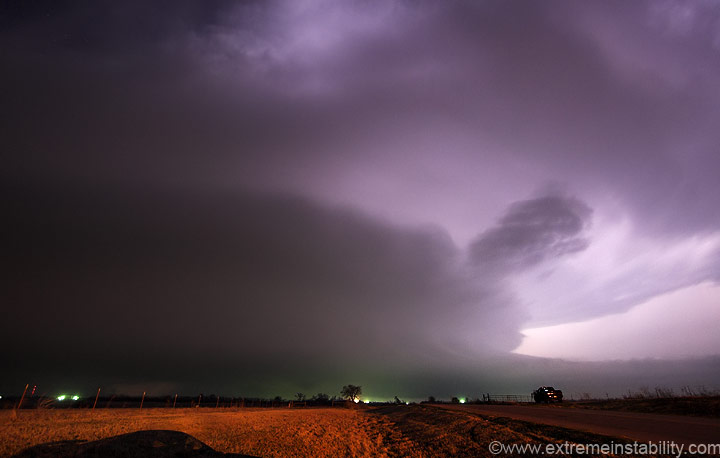 I wondered how I was going to keep chasing it, since my east option ended here. It was also going to cross south of the next east option north, or on it. 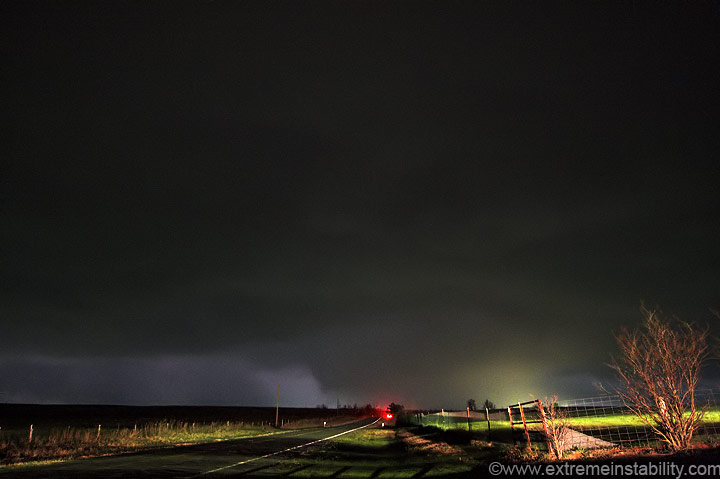 I tried the north option to see if it'd cross north of the next e-w highway or not. I'm really close to Albert OK, where a small tornado hit. It had to happen while I was right here looking north. You could see the bowl back in there, in a nicely formed rfd cut. 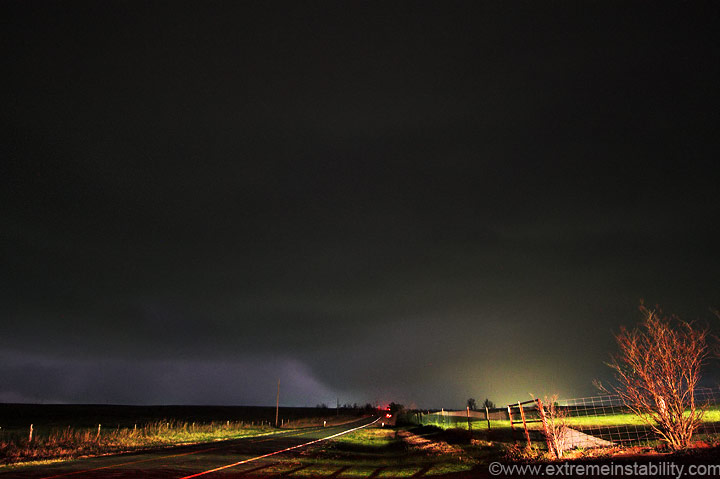 The structure and bowl in there just had the tornadic look to it. I'm still wide angle at 10mm. That's probably 1-2 miles north of me. I leave this spot and drive up that hill to get a better view. I pull off to the left, look back ne and see power flashes under that thing. Seemed those had to be really close to Albert.

After it crossed this highway I opted to try the southeast route. I thought I could do that and get out ahead of it easily enough. After a bit of driving the low clouds really began to block the view of the thing. I call it a day and get a room in Chickasha. Easily my best Oklahoma storm! I never seem to have much luck there.