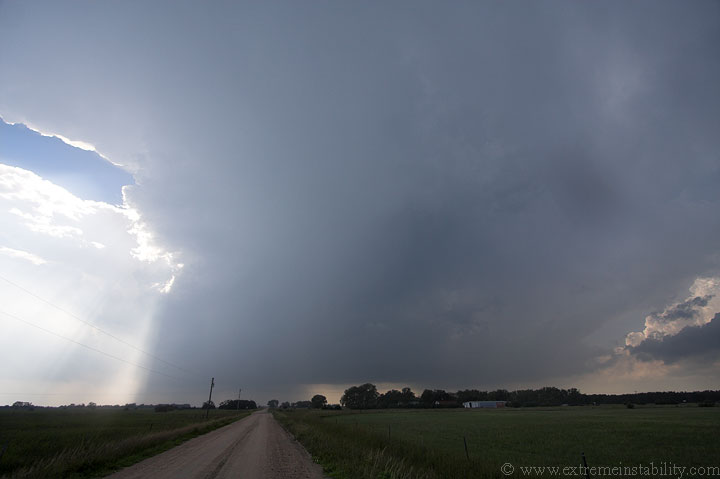 Back out west yet again. This was taken near O'Neill Nebraska. This was on a bit of a dryline, with extreme instability in place and 40-45 knots at 500mb. Another storm fired north of O'Neill, just into SD where this boundary intersected a warm front. With this flow and instability I wanted to be right where I was, hoping something would deviate hard to the south, latching onto this boundary(like July 12, 2004...which was actually extremely similar to how this unfolded....parameters were very close to the same and the initiation of this storm and the one to its south were about identical to that day...this storm even has a left split fly off it at initiation going northeast into the SD supercell...very much like the July 12, 2004 day). I knew where the warm front was and could have been there in plenty of time, but I did not care for the large number of towers between this stuff at O'Neill and that storm firing up there. Well I guess none of those towers amounted to much, and the SD supercell went bonkers until the split off this storm slammed into it. Just before that happened, the SD storm evidently produced hail as large as 7 inches in diameter(not a typo). Here is a link to one picture of the hail 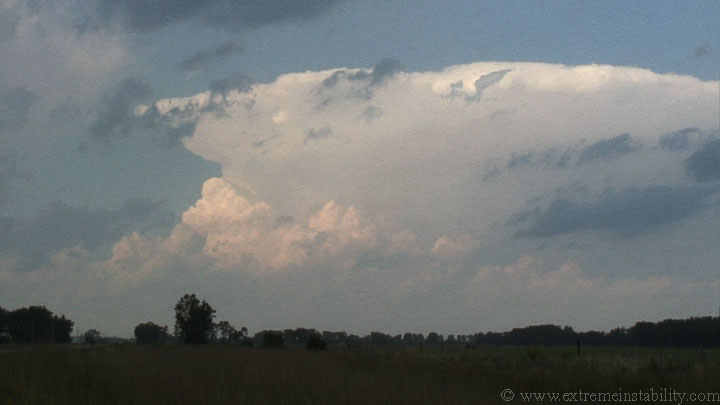 Above is a crappy video capture of the storm to the north that goes on to produce that gigantic(possibly record setting) hail...a short time from now. 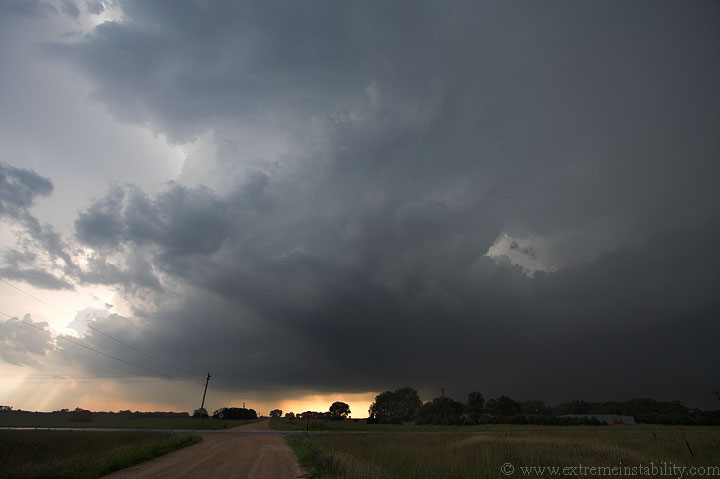 Meanwhile my O'Neill storm has just sent that left split flying northeast and turned hard to the south. It's doing this in the same exact area as the one July 12, 2004 did, with 6500+ SBCAPE indicated on the spc mesoanalysis at this time(much like the July 12, 2004 day.....OAX sounding I think had 5800 mlcape on it that day, to the east), plus the boundary orientation to its south is almost spot on to that day. I guess one difference is 500mb flow was a smidge higher this day, as were the 300mb winds(not much in either case, but some). This updraft already has this nasty convective wall to its northeast, feeding back southwest into it. 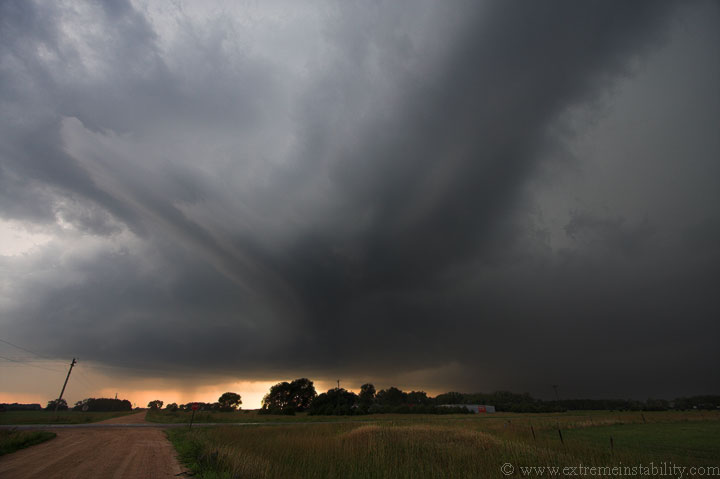 I almost think the winds aloft were too strong for this to really latch to that boundary. It just didn't seem to be able to turn hard enough, and wanted to grow east. At the same time it did partly want to go south. A new intense cell southwest of it would soon rain into the back of it. Still, where this new cell fired and its closeness isn't all that unsimilar to the July 12, 2004 tornadic beast. So, I raced south to be on that one. 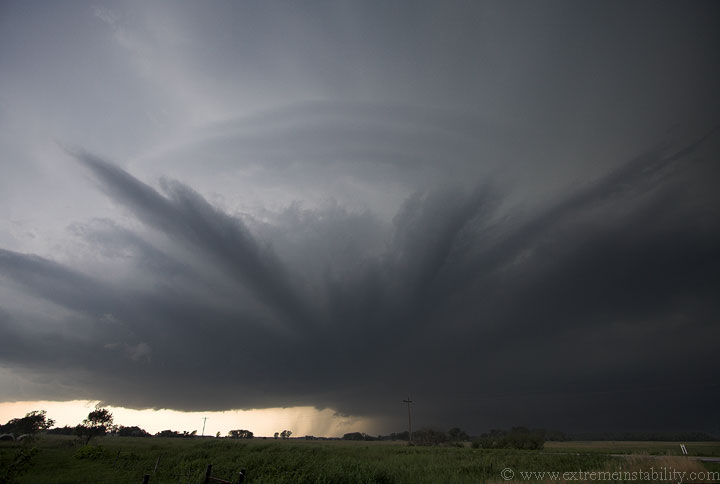 This was the new southern cell. The updraft on this one looked vicious when I first saw it. The storm soon looked to be on its way to tornadoing. It was organizing and getting a big lowering behind the rfd cut. It had a nasty east-west wall now, similar to July 12, 2004. BUT....that wall soon grew too much, being slammed from the north by everything going on up there. I saw it and knew the show was over.

I'd love to know what was so negatively different from this and July 12, 2004 that promoted that too happen. The surface boundary location and orientation, as well as movement seemed so much the same between the two, so I just don't think it was that. The better flow aloft on this one shouldn't have been the negative. Guess it was something in the thermodynamics and the generation of cold pools. July 12, 2004 managed to produce that monster supercell and tornadoes with only 20 knots at 500mb. Guess I'll just be annoyed not knowing what the key was that was missing on this one. 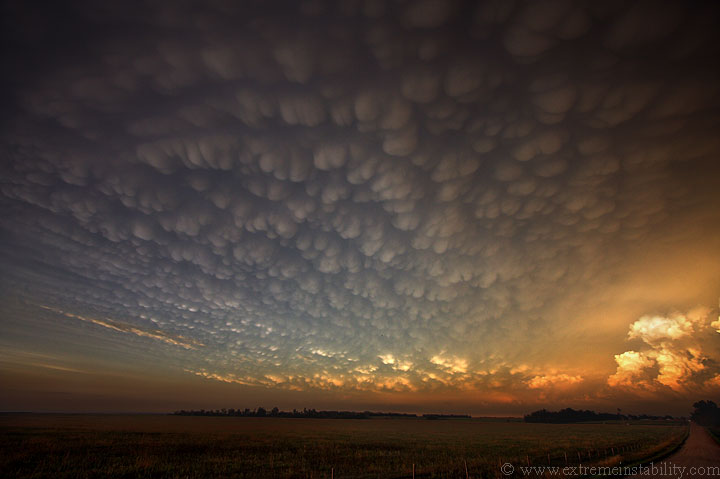 I was somewhere west of Elgin NE when I got the whole mammatus bug again. The storm had been one big mess moving south, now tornado warned but apparently hopeless. Just before I left it I noted a shelf growing on the east side of the core. Figured it'd bow east on that side and sure enough, it did. Instead of waiting for that to grow and bow, I opted to leave it behind, to race north for an hour to get out of the rain and few low clouds. I just knew with the convection being so intense today, and hanging around more than the day before, that there were likely crazy mammatus again...perhaps better than the best display I'd ever seen....just yesterday. Part of me thought I was being silly doing this, thinking I needed mammatus again after such an insane showing only one day ago. I went anyway and already have a new best lol. The view was from west of Creighton Nebraska. 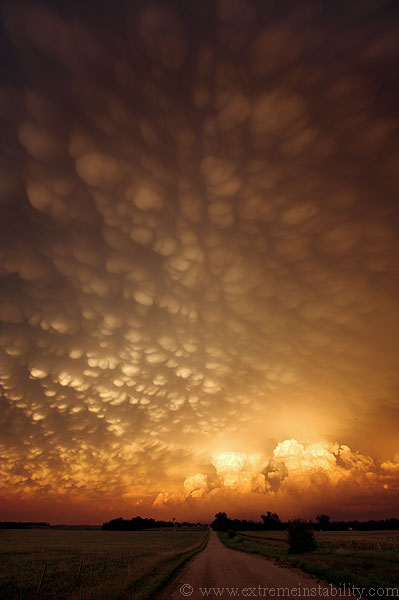 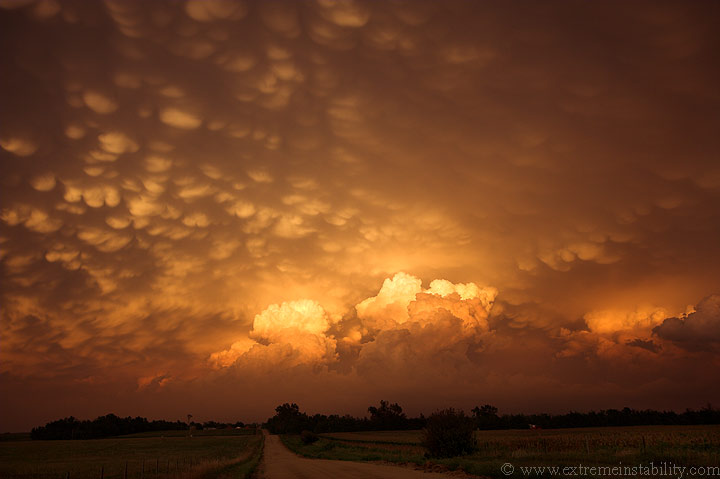 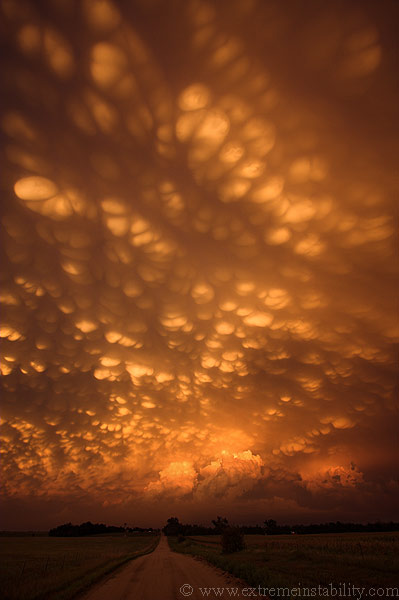 Widespread mammatus on crack. They were nuts. 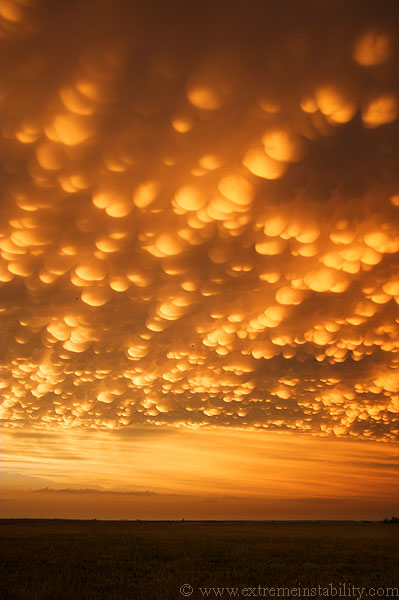 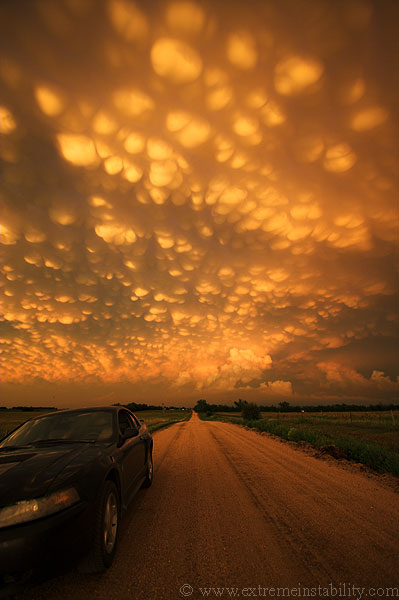 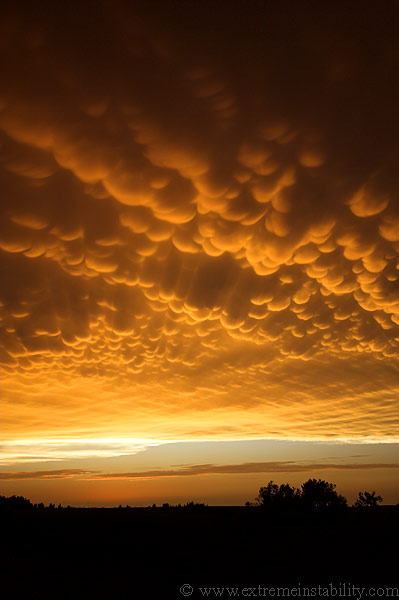 While looking at this one and thinking what to type I all the sudden felt the need to somehow have mammatus pillows made. Why I want a pillow that is shaped like these I'm not sure. Hell a bed made like that would rule. 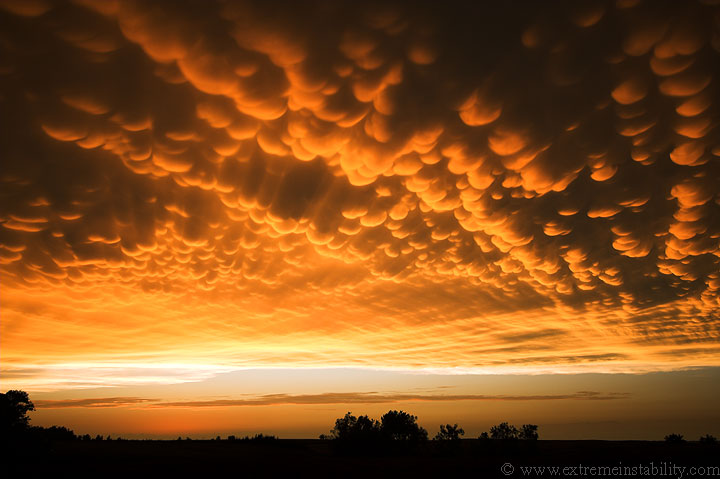 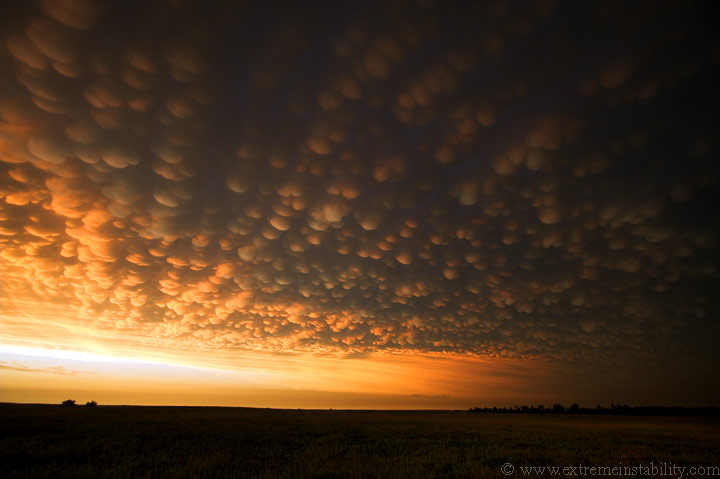 This was kind of cool as the sun got even lower. The mammatus became oddly multicolored(the darker area where they are the two different colors mixed in together). 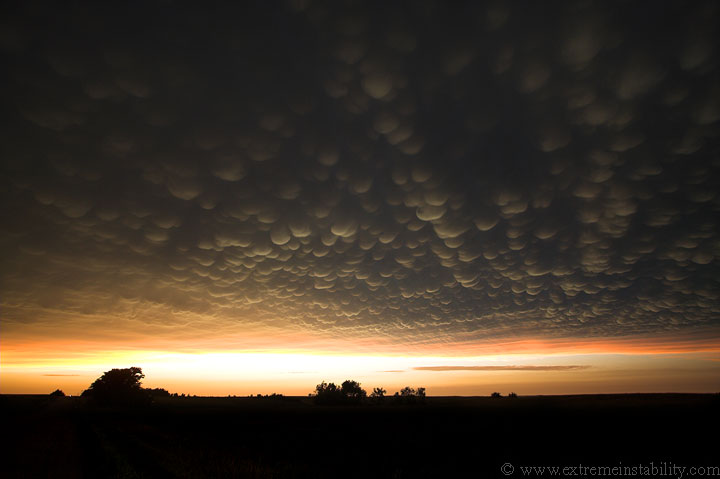 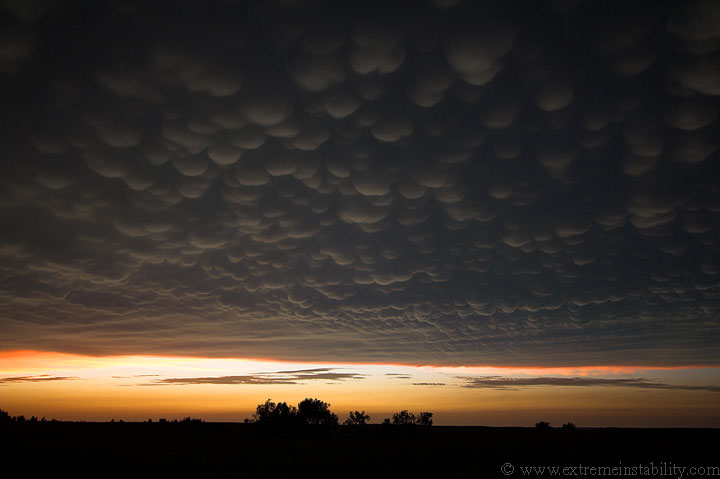 Thank you mother nature! Funny to note exactly what was producing such an amazing display...at least in part...a storm that was producing hail big enough to punch holes through roofs. Hopefully some more pictures of that area(Dante SD) will turn up. I wish I would have chased that thing. I would honestly love nothing more than to be in my car during something so nuts like that. I'd just close my eyes and roll video.