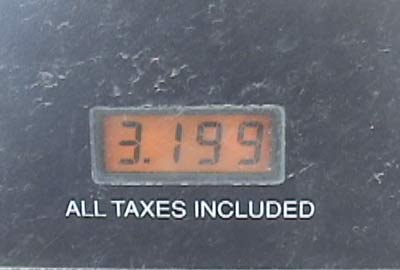 I saw gas was $2.70 in town the night before the chase day and really wondered if driving across Nebraska the next day would be worth it or not. So the morning of I top off the tank and head out. Getting low on gas I decide to fill up in Cozad. It was there the odds of it being worth the cost would go down hill. $3.20/gallon. Sigh. 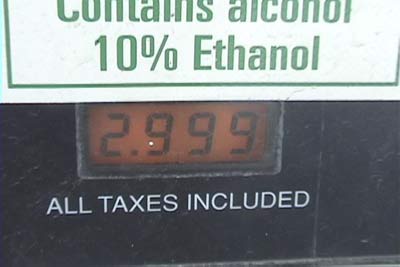 Ah but they had cheaper gas there. Only $3/gallon, I was saved! Not. I figured this would be the norm as I went west along I-80. It should have occured to me there was only one gas station in this town and perhaps the others with more stations would have some competition. North Platte, which usually isn't very cheap, was between $2.50 and $2.60. It is really sad when that seems like a steal. Paying the credit cards off this winter sure is going to be fun. 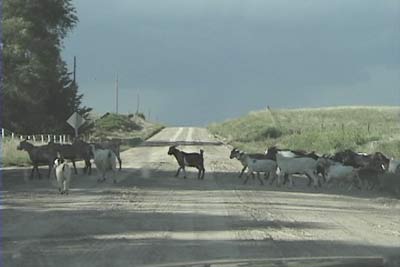 I sat at North Platte for quite awhile, waiting on the elevated chain-o-fun to finally root something. Well finally something a lot better forms, but is still extremely high based, as well as being low topped. I dropped sw of town to watch it and found these goats having break(from what no idea) on this bad bad road. 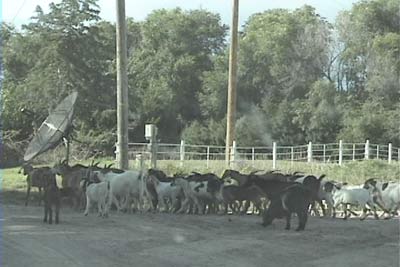 I inched north and they moved on back into the driveway. 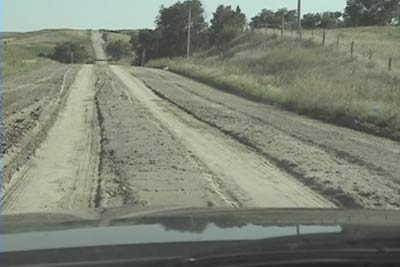 I got up the road a ways and said, no thanks. This road consisted of sand and sand only. Not wise in a Mustang near convection. 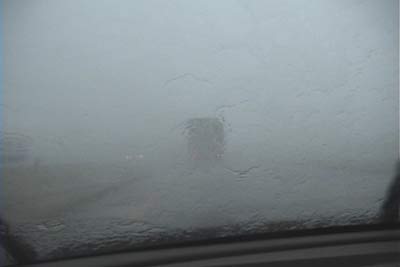 I'm now on I-80 going se in the back of this storm. I must have turned around 20 times on the highway south of North Platte, trying to decide what this storm was going to do and which road to take. I knew getting ahead of it on I-80 would prove tough as the core was going right down the interstate. Not only that but there is a 10 mile stretch of one lane fun. A good chunk of this 10 miles I'm doing 25mph in the back of this long long line. You could tell when the core would get worse up ahead as it would slow to a crawl. Good thing this storm sucked I guess.v 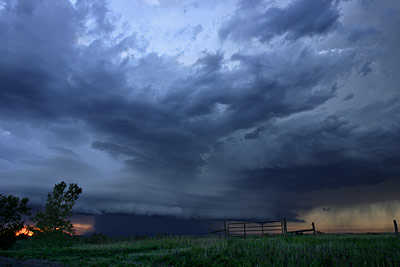 My day almost ended right after getting out of that core. I hadn't even taken the still cam out once and it was not looking like it would happen. I was pretty sure that $3/gallon would be a huge waste. Then near Elm Creek I decide the storm looked interesting enough to head north off the interstate for. 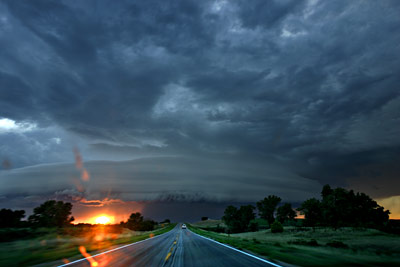 I'm driving nw towards Amherst here. I was going east till I saw the sun starting to come through. I then needed to find a place to shoot that was free of all the lovely things that make a nice shot impossible(powerlines, hills, trees, etc). I knew it wouldn't last long like this. Here is the first shot out the front windshield(stupid bug splatter!). 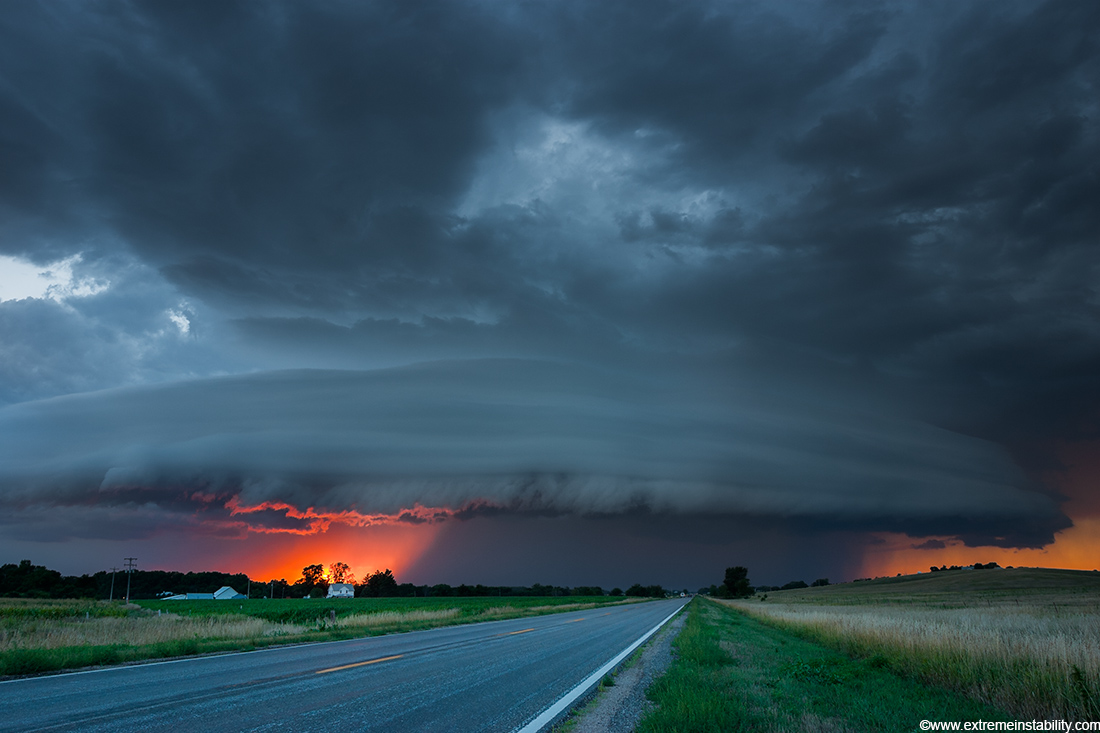 I pulled over on the shoulder so I could get some stills with a little less bug goo. Watch any unpaved shoulders in central to western Nebraska as they aren't called the sandhills for nothing. 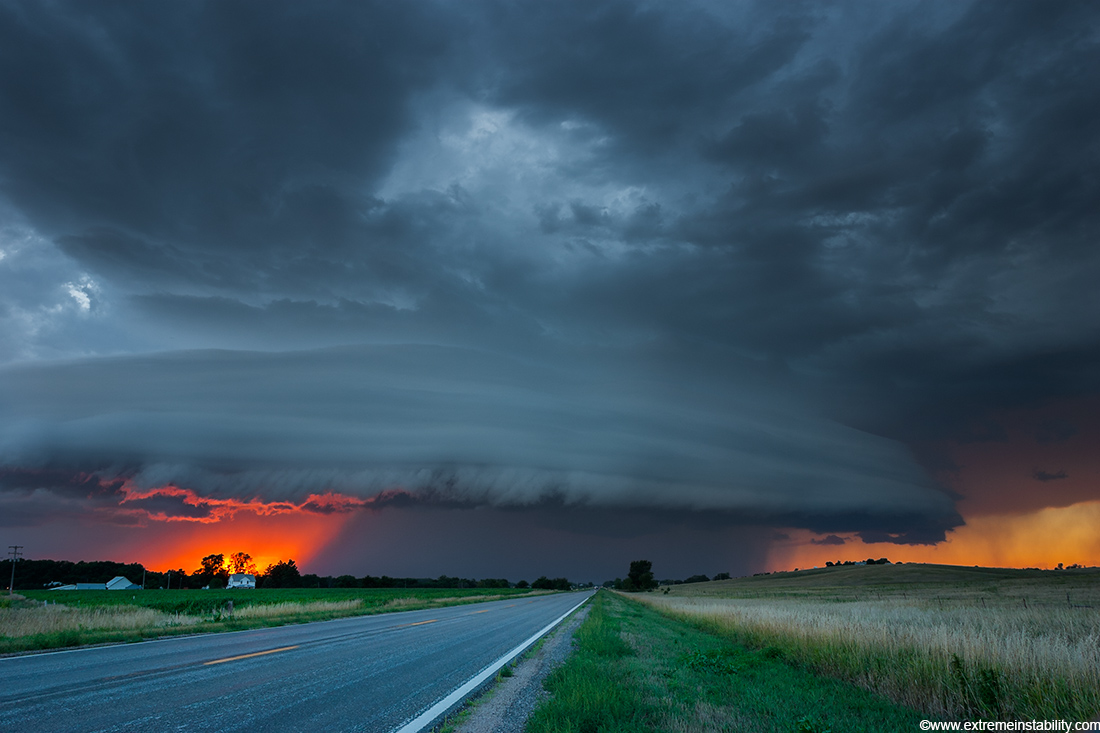 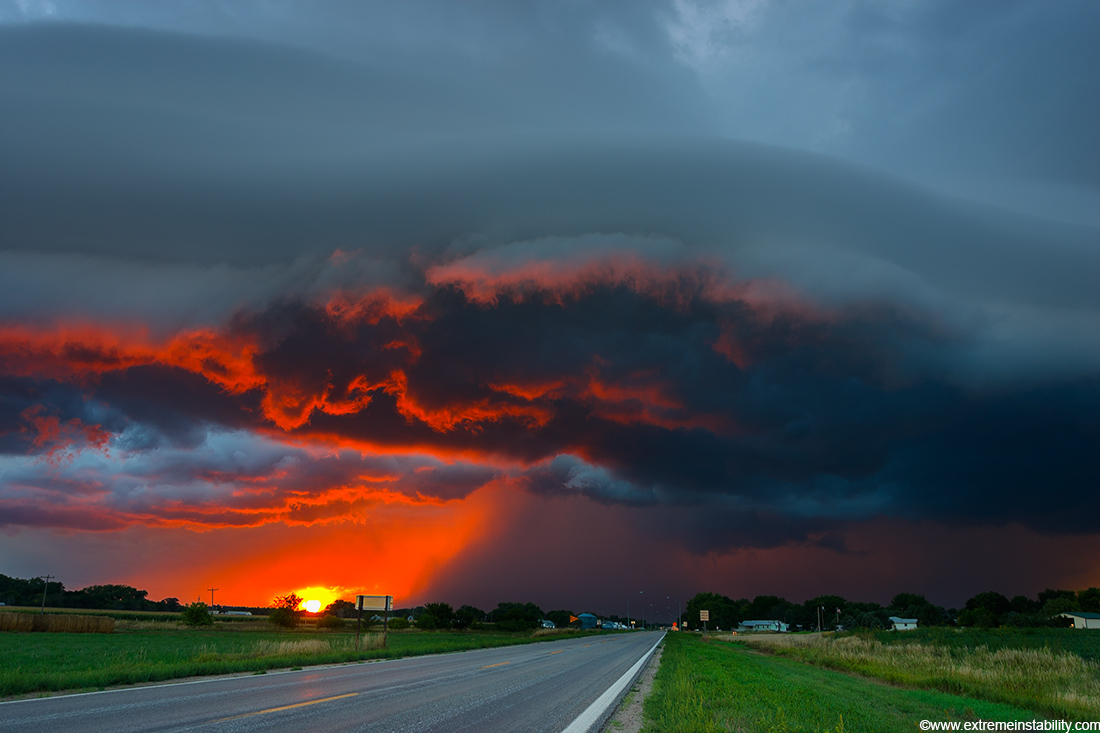 It was really a brillant red like it looks here. Not a tornado or even a nice supercell, but it was a start. 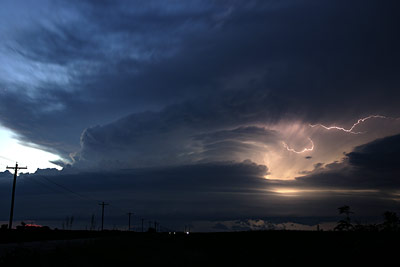 I'm still far from home and thinking I should be well on my way back. I can't stand being extremely tired, hours from home. The severe storm back near Gothenburg tempted me south. I pulled over south of the interstate at Odessa and watched it move east. 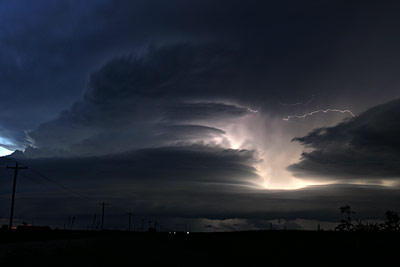 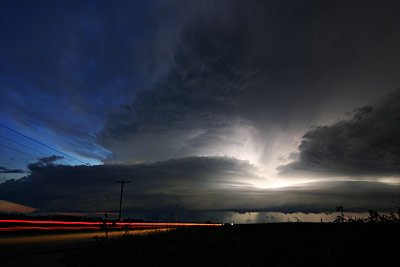 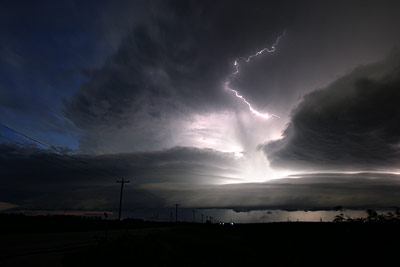 I think it was around this time frame that it became tornado warned. It was very outflow dominant though. 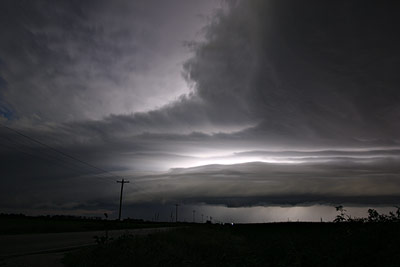 Had I been in the Dakotas or Minnesota I'm pretty sure this would have been impossible due to mosquitoes. Around now it loses what bit of a rotating updarft it might have had and became very shelfy. At the same time, the frequent lightning became constant, all right in the shelf. 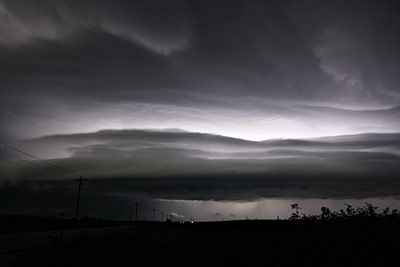 It was racing east now and wind reports of greater than 75 mph were being reported. 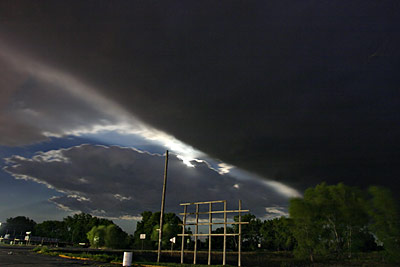 I moved back to the interstate and watch the shelf move over. It was really cool how the moon lit up the front of it. 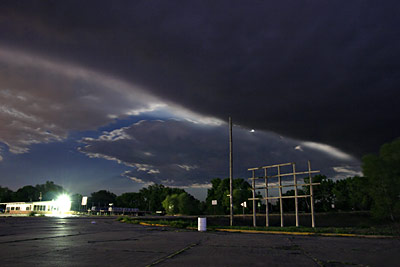 Well, not a great chase day by any stretch, not even a good one I don't think, but it smoked what July had to offer. :( Next....