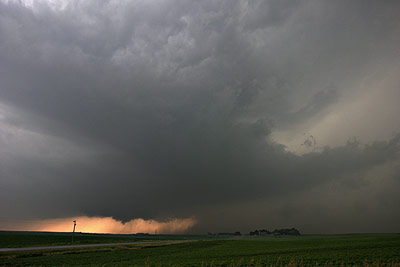 I started the day off in Yankton SD after a boring last couple of days with way too much driving. I got data at the motel till about noon when I started to drift north, watching the boundary to my west. I did this for a couple hours until I was in Brookings SD. At that point the stuff north was quickly forming a line. I was rapidly losing any hope for this day.

While heading east out of Brookings several small returns started to show up on xm. I wanted the southern most cell as with south to even ssw surface winds whatever was happening north of the rest was sure to suffer. I get south and the storm that I could se getting larger nw of me was now putting down a tornado. I could not see it from where I was but it was where I had just came from. It really didn't bother me as I was having some faith in what I was doing and was quite sure that storm was going to quickly die, which it did. The storm south that I was heading to and the surrounding surface winds pretty much said that storm had to die. 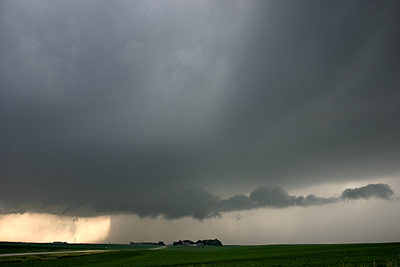 I get to Avoca and think my cell to the sw is multicellular garbage as it looked that way on xm radar. I was going to let it run me over and get some hail, but the confirming tornado reports with the one to my north made me wonder. The one to the north also looked like crap on xm. I change my mind and drive east of Avoca to try and see a base of what was moving ne towards me. Maybe 10 miles east I stop and watch the storm evolve. These images are from that location east of Avoca, straight south of Stroden. 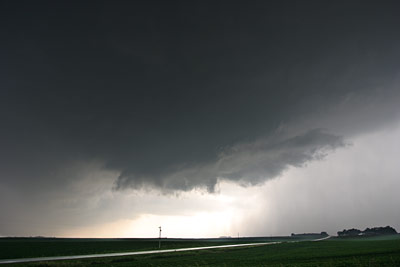 It started looking much better than I was expecting. It is now getting an rfd cut and mildly wild motion north of it. 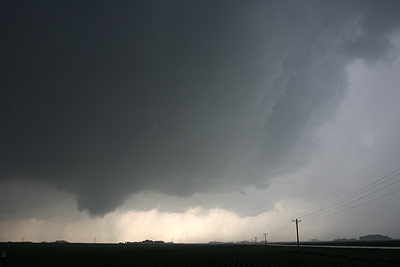 As that area was almost overhead I had to move east. I move east 1 mile and pull over again. About here I could tell it was going to produce. I was in rain and this road south of the highway was bad. My car is actually still parked under those powerlines on the paved part. I ran back to get out of the lines to snap the only still of this developing tornado. Notice the nice wall/vault on the north side of this updraft now. 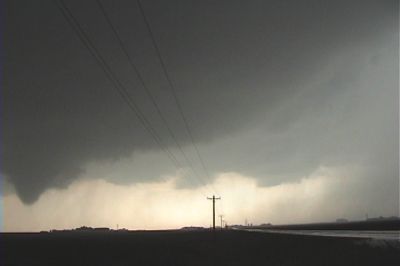 Back in car, under the powerlines. 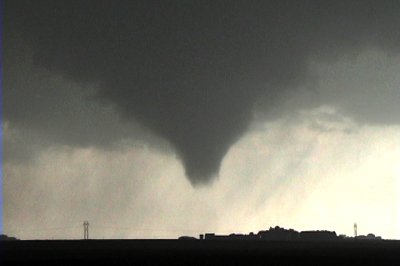 Nice motion and getting closer to the surface. I called it in at this point. 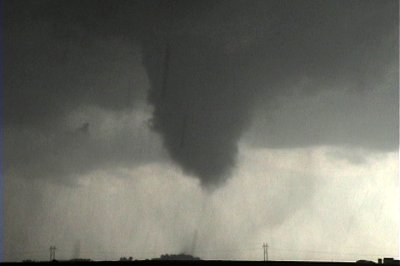 Contact. This was very brief and I imagine the farm that got damaged was near those trees. That is just under a mile away because I was just under that part of the storm, before moving the mile east. 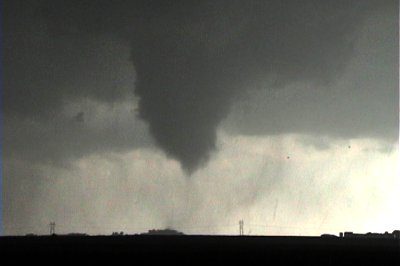 This actually started to move more se than east. 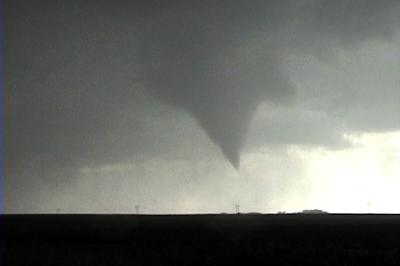 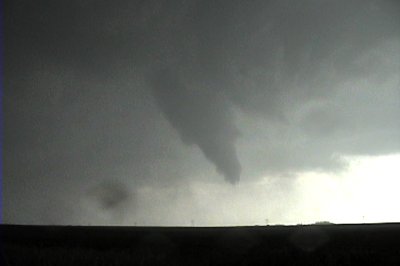 I'm starting to get hit by strong north winds and rain now. Oh yes and once again the mosquitoes proved to be a real pain to record around. 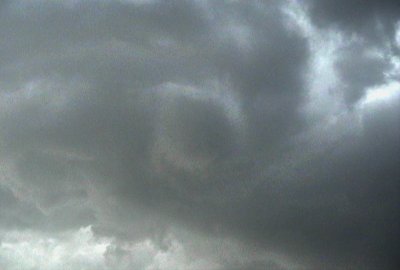 After becoming un-organized around Windom it produces this intense vortex overhead, ne of town near Bingham Lake. It was traveling right along 60. I noticed this while trying to get back east of it. 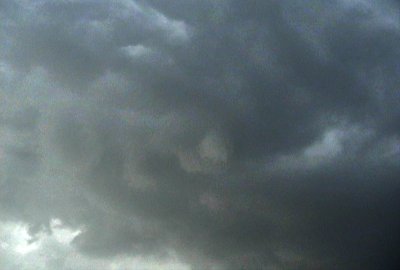 I stopped and got some video of this wild rotation overhead and just n of me. 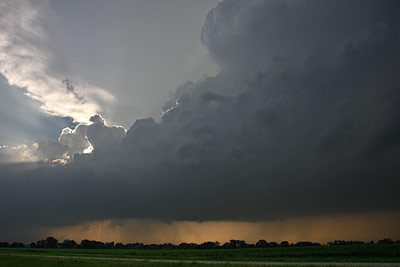 I think the following images were shot near St. James. 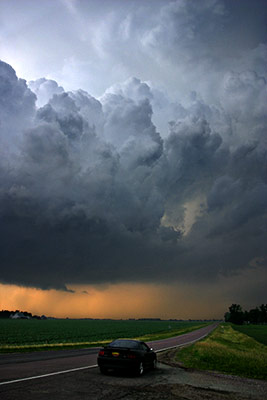 The convection was nice but severely blown over. The main updraft tower continues well to the right of the image. 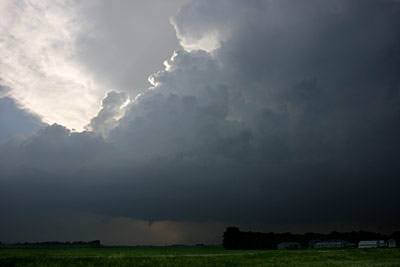 Coming into Madelia now and it is starting to produced another tornado. 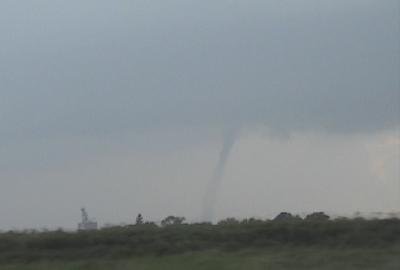 It really sucks that it did this as Mike Peregrine and myself were driving around this town. 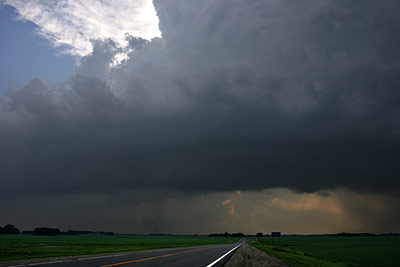 I tried to get closer, but as we got to the north highway it went POOF, or so it looked. 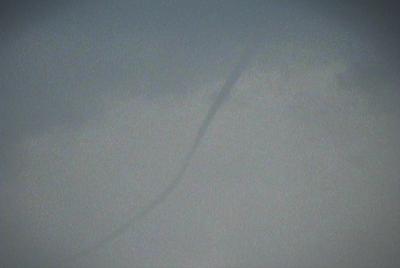 This persisted in there for a few more minutes. 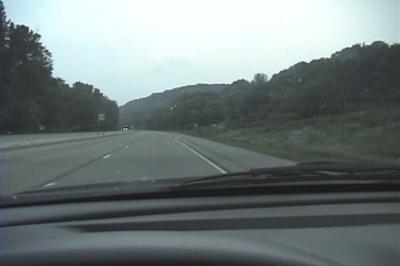 Heading north out of Mankato. I've never been to Mankato before and will never go north out of town trying to chase again. I'm not sure how far it goes like this, but after seeing I was running along the river I figured it could go on for a while. I could only see the very top of the updraft approaching from the west so I turned around and called it a day. It sounds like I must have missed a tornado while in this mess.

I'm glad I left when I did, as I'm not sure I would have made it all the way back home had I stayed any longer. The lightning was really wild while heading back home but I chose not to stop and shoot images of it. It was dark now and I had 4+ hours ahead of me yet.