Well this is was one of the more amazing chase days I've had. I don't have to have tornadoes at all to be very happy. I've been happier after amazing storm structure than I have after any nice tors so far. Storms such as this attack your senses in a big way. The wind, the shapes, the changes, the flashing lightning and the noise all add to this amazing experience. It is also nice to be chasing it with so many friends. Anyway, on to the account.

I will say my car did not like me this day for some reason. While getting stuff setup in it I stepped back out of the door/front seat and hit the back of my head on the top part of the door frame. No biggie wasn't a hard hit. I go back in to move more stuff around and what do I do? I do it again but I do it "right" this time and nearly knock myself out. I saw the flash and then felt confused for a while. I walked it off and carried on.

I head out targetting a pitstop at Columbus Nebraska. I get data at a wifi/motel stop there and two areas look good on satellite. One was sw near Grand Island and the other just to my ese. The problem was my view of the cu overhead on this warm front was a SAD one. These "cu" had that "I'm going to bust" look all over them and they didn't get any better over the next hour. I met up with Randy Chamberlain on the south side of Columbus. It was there car attack number 2 happened. While standing in my door getting something out of my car the door blows shut and hits a nerve in the back side of my left knee and sends a quick shock all down my leg. It then turns numbish and starts warming up. I couldn't feel anything over the tops of my left toes on that foot. Grrrr! I slowly walked it off too. 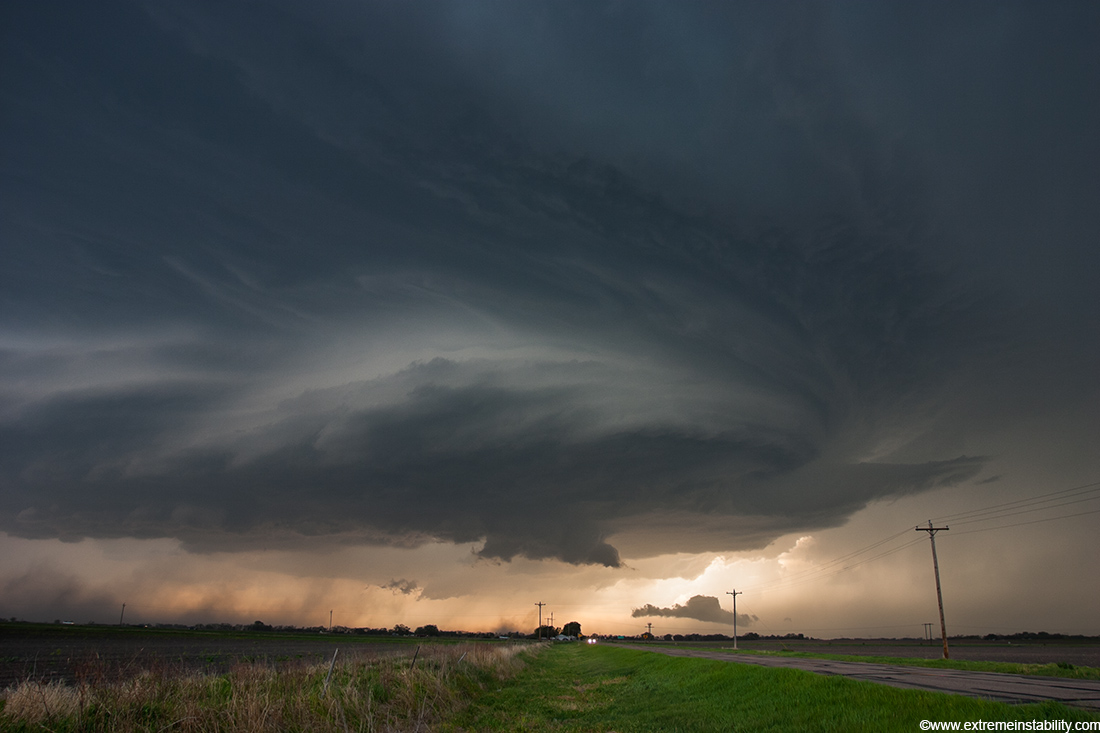 We top off when the tornado watch comes out and then meet up with Steve Peterson and J.B. Dixon. Finally the cu started to tower. This was after 6 too. I was amazed they were towering at all as I fully expected a bust day for the last several hours. The returns start showing near Grand Island and we go that way. Then the one takes off and is soon tornado warned as we are half way there with a long way to go. Steve was now leading way up there followed by me, Randy, and then JB. I was plotting out the course to take with Steve on the cell phone and that was west at Chapman on a Co. road. Down highway 30 the BUSY train tracks run along it on the nw side. We come up on this train that is hauling se with us. I realized we would have to get far enough ahead of it by Chapman to beat it at the crossing so for several minutes we were trying to gain on it. I think it was moving 55mph. Coming into town I knew it'd be close but it looked like we had it. Then this semi pulls out right infront of us and slows us to a crawl as this train is racing se...we were hosed. 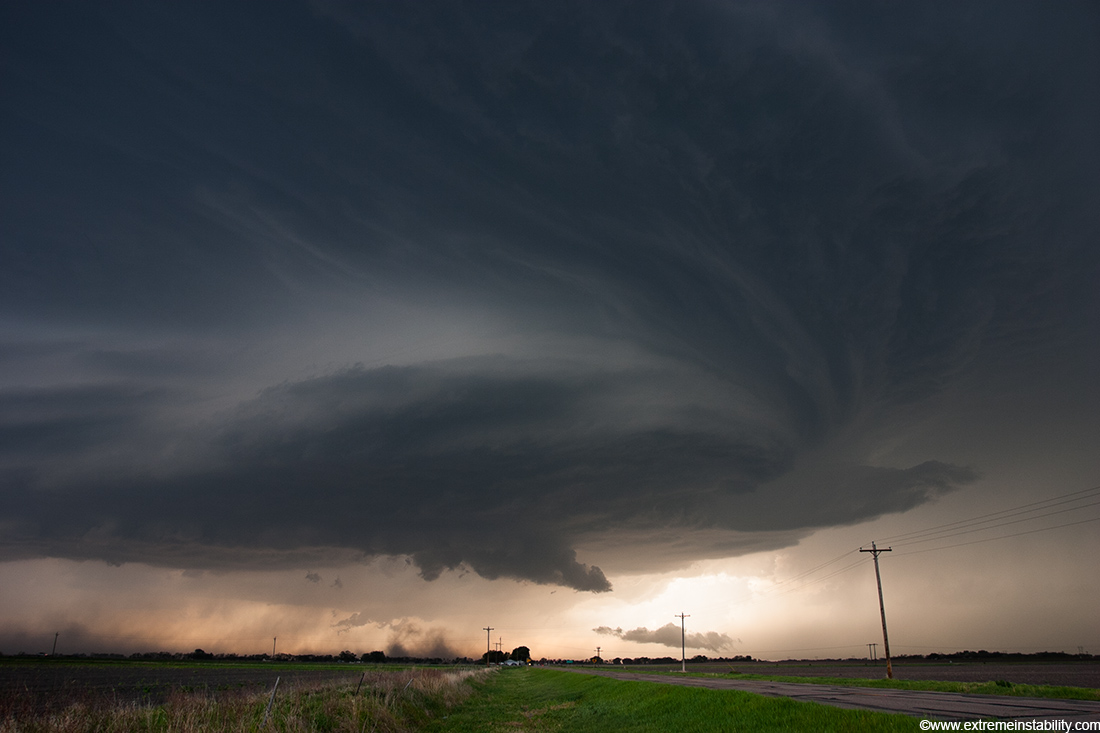 But then the semi for some reason changes his mind and scoots over and lets us around. I step on it, yank around the corner and the crossing arms start flashing but I make it. Then Randy makes it. I look back and there they are coming down ON JB, lol. He makes it though. That was just a cool little journey by its own. We then go west and this was waiting for us on the north side of Grand Island. You can see the rfd kicking up dirt. It would surge and let up over and over with the storm as the inflow winds ahead of it constantly increased. 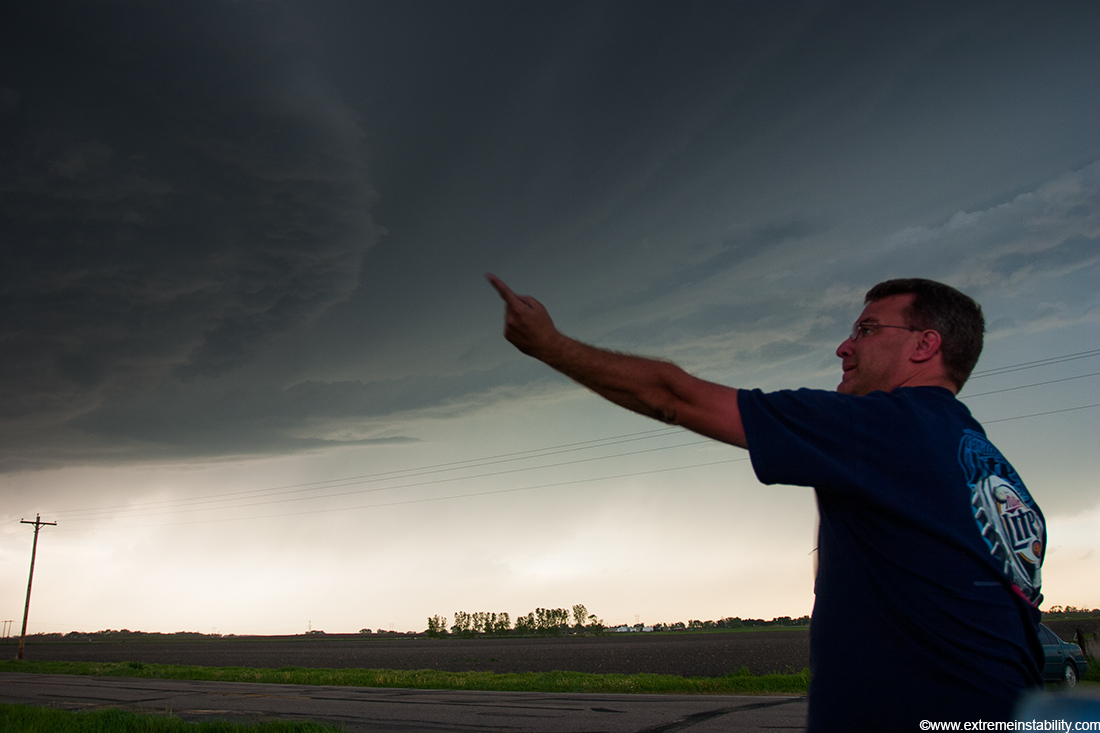 Randy might have been saying, "Look at that #@$#@$@$#$@". I know I was. Steve was over in the field shooting a long time lapse of this which he had better TL on the puter.

Chasers fleeing the rfd dust trying to munch us all most of the night. 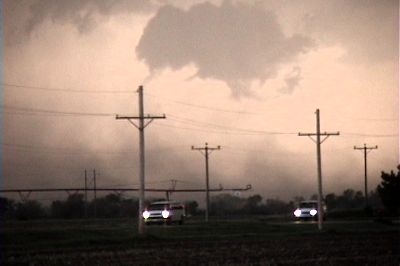 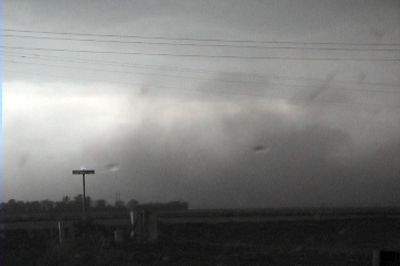 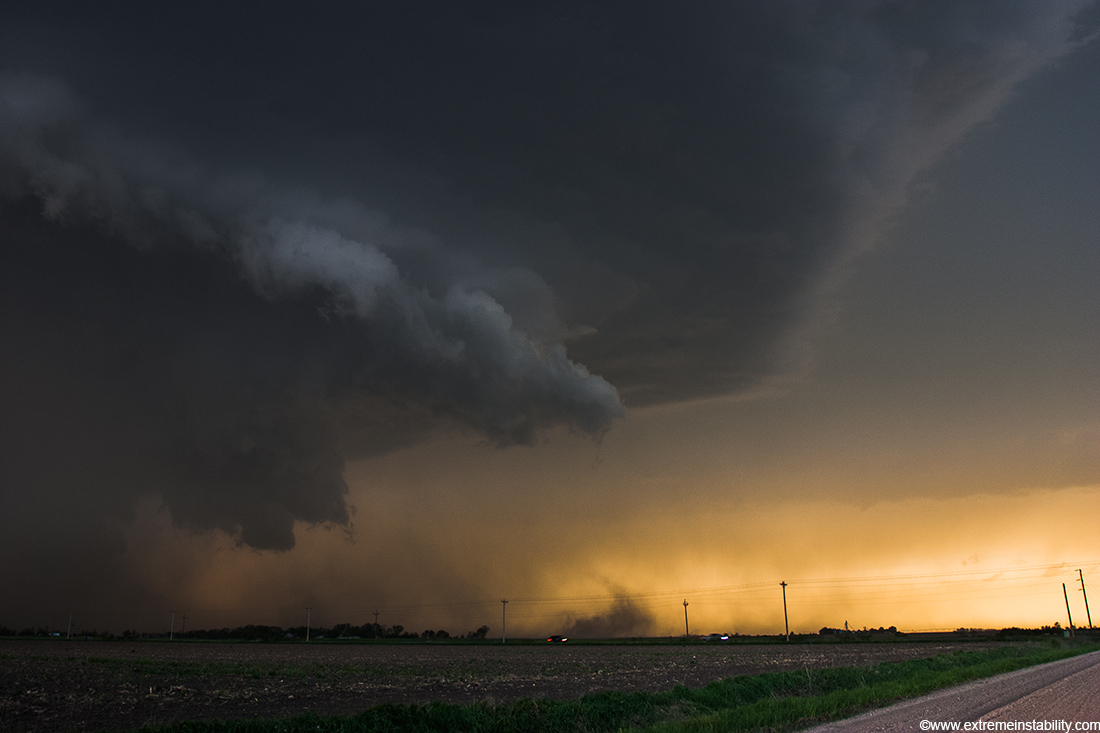 We scooted east a couple miles but were still under the storm too much for structure. This picture is a lot cooler at full size as you can see the tiny chase vehicles below it racing east on that gravel road. It really shows the size of storms. 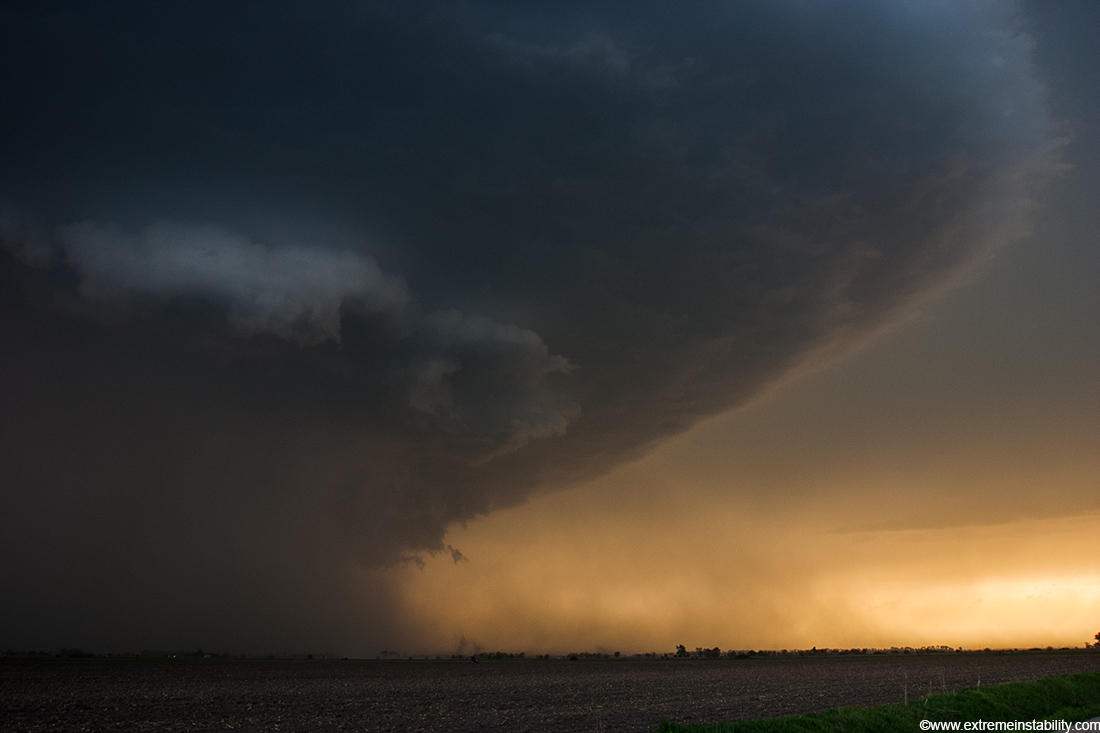 Lots of chasers on this storm now. 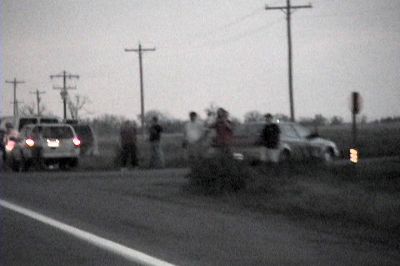 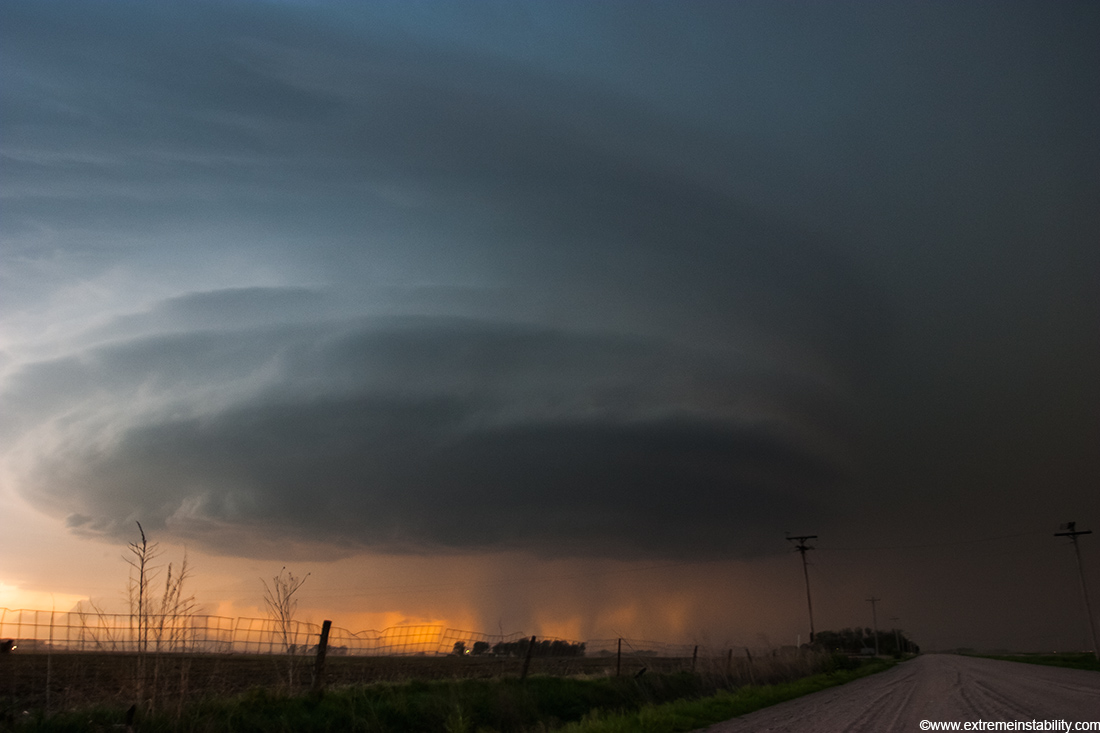 South side of Central City looking back west. 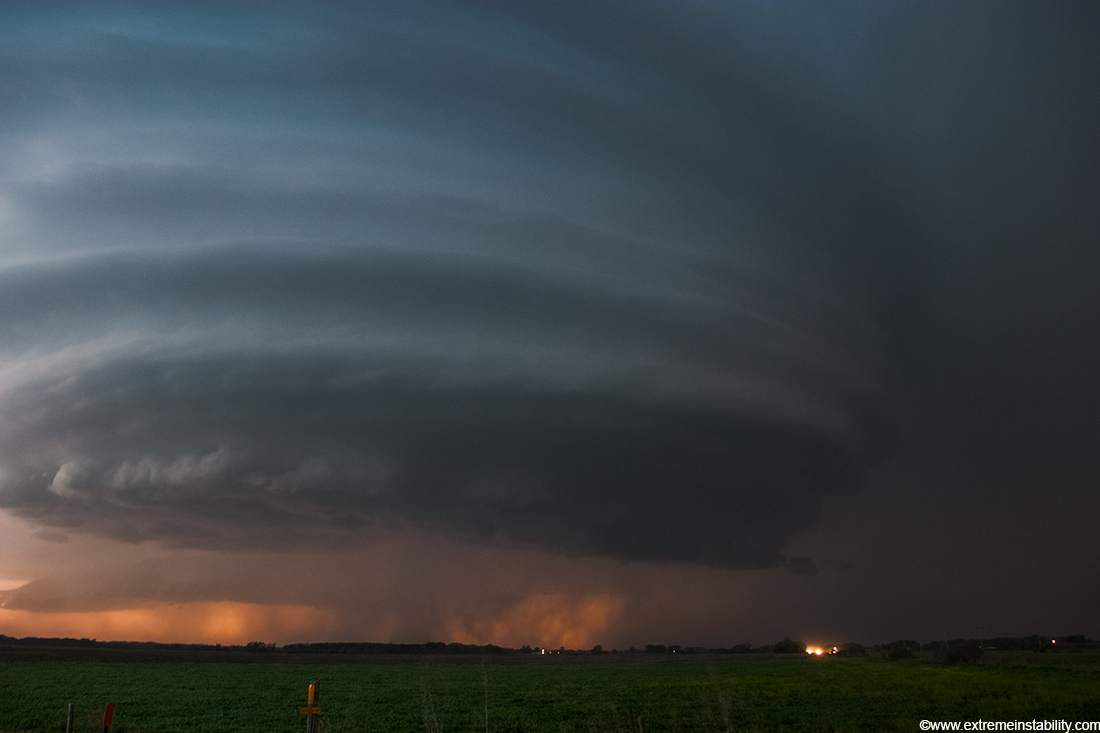 This is really starting to pull inflow now. 40+mph winds with a lot of dirt in the air and just this haze/humidity along the boundary. 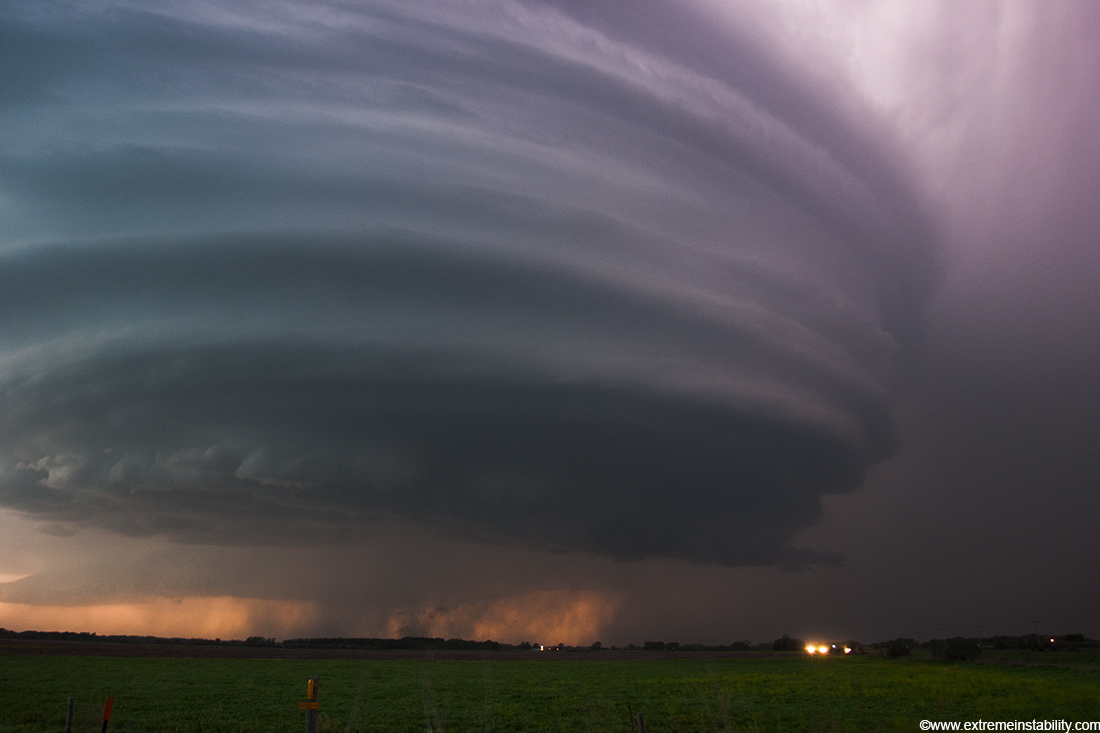 I guess this is when the picture taking got kind of fun. The lower the lighting gets the easier it becomes to balance it. Getting the tripod to stand still in those winds and the longer exposure is the challenge. The slightly longer exposure opened this scene up so it was a bit brighter than it was while there. 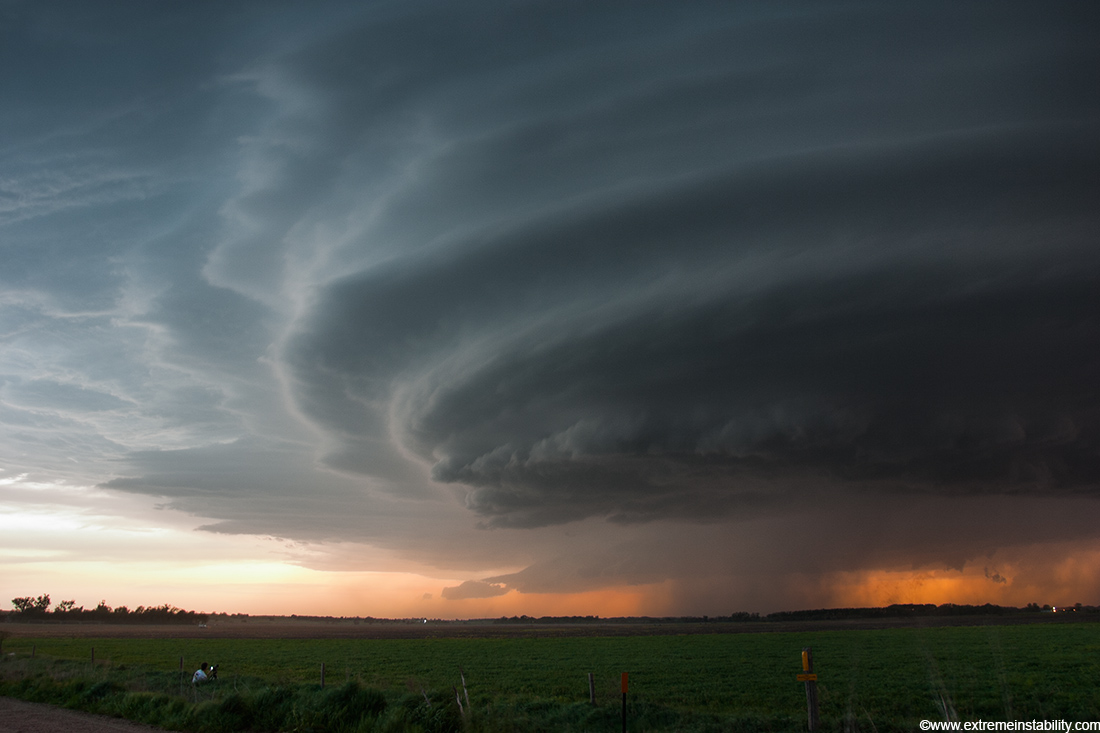 Now this lighting is about right. It was getting darker and darker out as the sun was likely just below the horizon now. 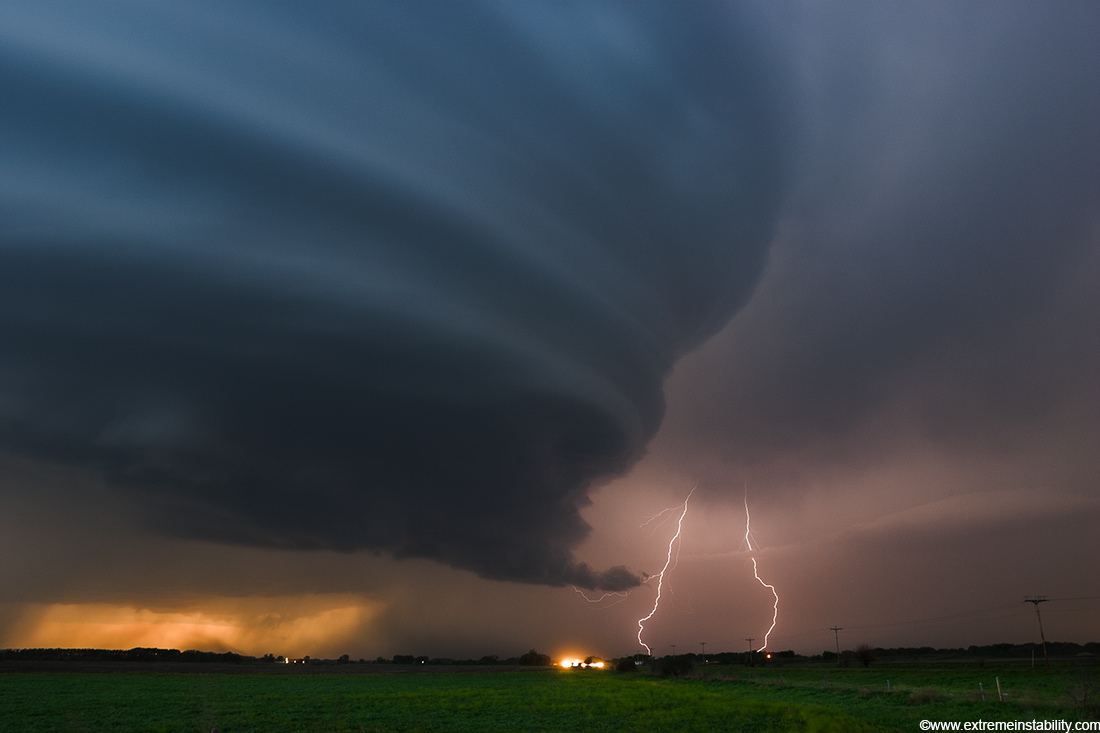 Moved east again. It was here some guy pulls up and starts yelling at me. I didn't know what he said at first but he yells again and I hear him say, "Mark, get home!!!". This is over the raging winds and dirt in a dark setting with lots of lightning shooting out of this thing. I tried to tell him I'm not Mark but he wasn't hearing me or caring to listen and kept yelling. Finally he hears me and sees that I'm not Mark(apparently his son, who also drives a black Mustang). He felt like a fool, but I tried to let him know it was ok I wasn't upset at all. It was pretty funny.

Note I said dark out. This shot looks like the sun is just setting when in reality it was already down quite a bit and it was basically night now. I used a longer shutter for not only the lightning(to catch them) but to also show this storm structure. The following are mostly shot at 20 seconds at F/7.1...ISO 100. 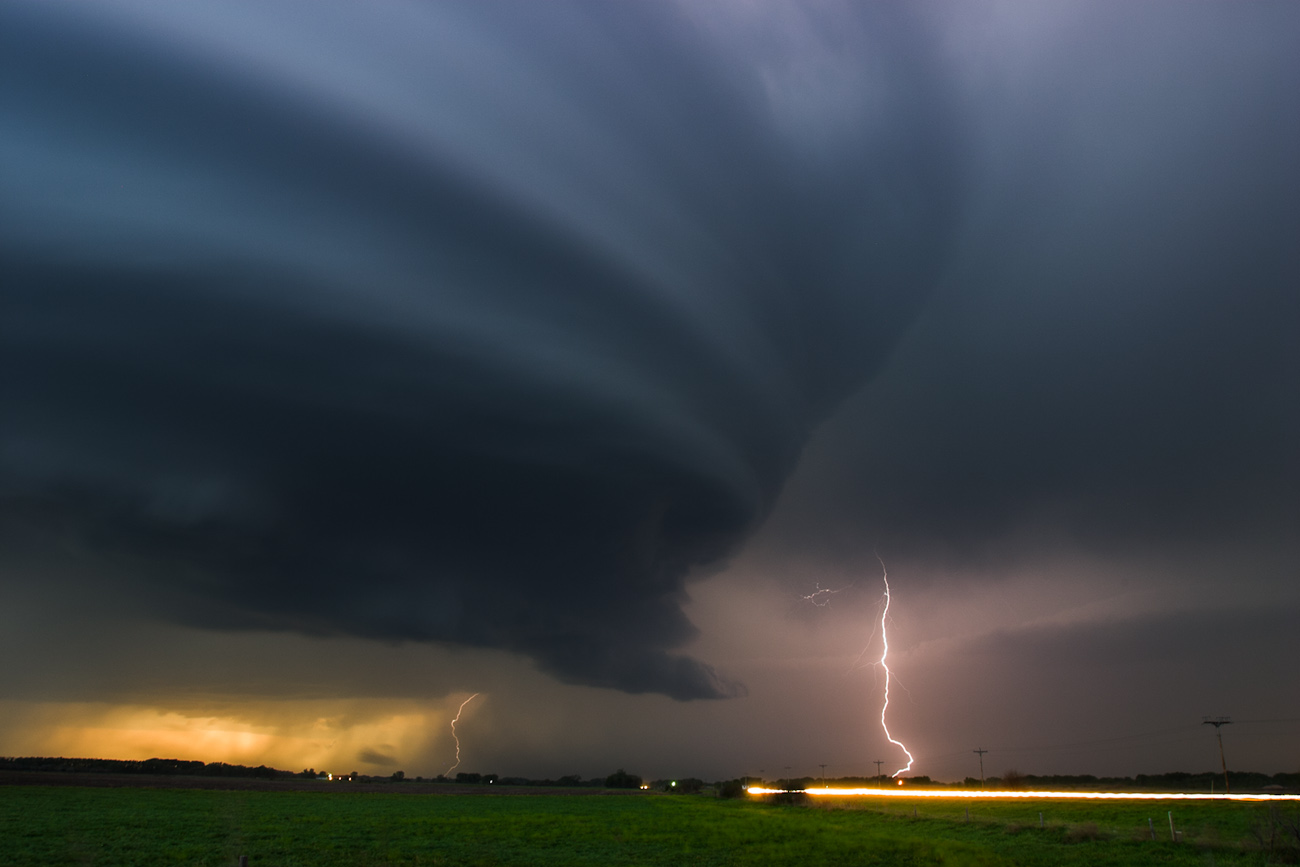 This may be my favorite shot. You could get a shot like this at amost any hour of the night, minus that sunset-looking-light to the left. This had to be 30 minutes or more after the sun was down. There was just enough light left over there to really brighten up under the longer shutter. What you end up with is a shot that looks like it was at sunset, but you have the lightning bolts and the car headlights going by with it. The storm structure isn't going to change drastically in only 10-20 seconds so that is mostly how it was, it just smooths out a bit with a shutter of such length. If you are shooting lightning at this hour you'd almost have to get a shot like this. 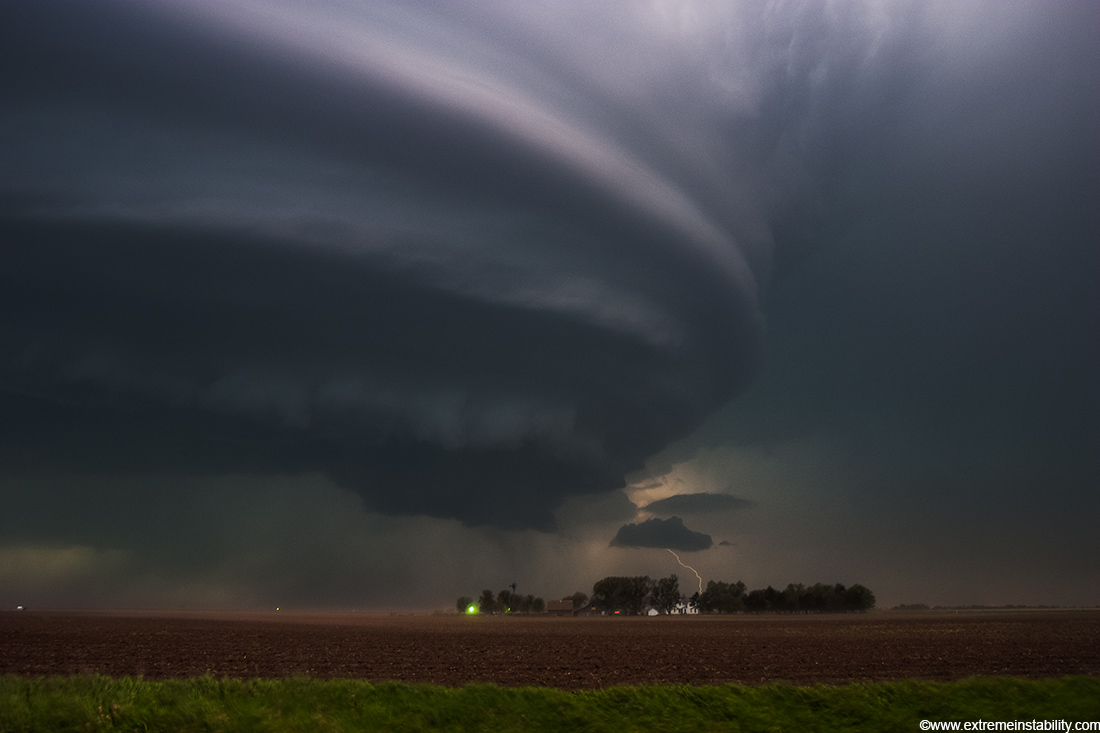 Another favorite. You can see the dust coming up off the field and the lightning bolt behind the farm house. This was only 5 seconds at F/4.0 now, but with the ISO bumped up to 400. There were a few flashes that really lit up the surroundings which made this shot as bright as it is at only a 5 second exposure in the dark. 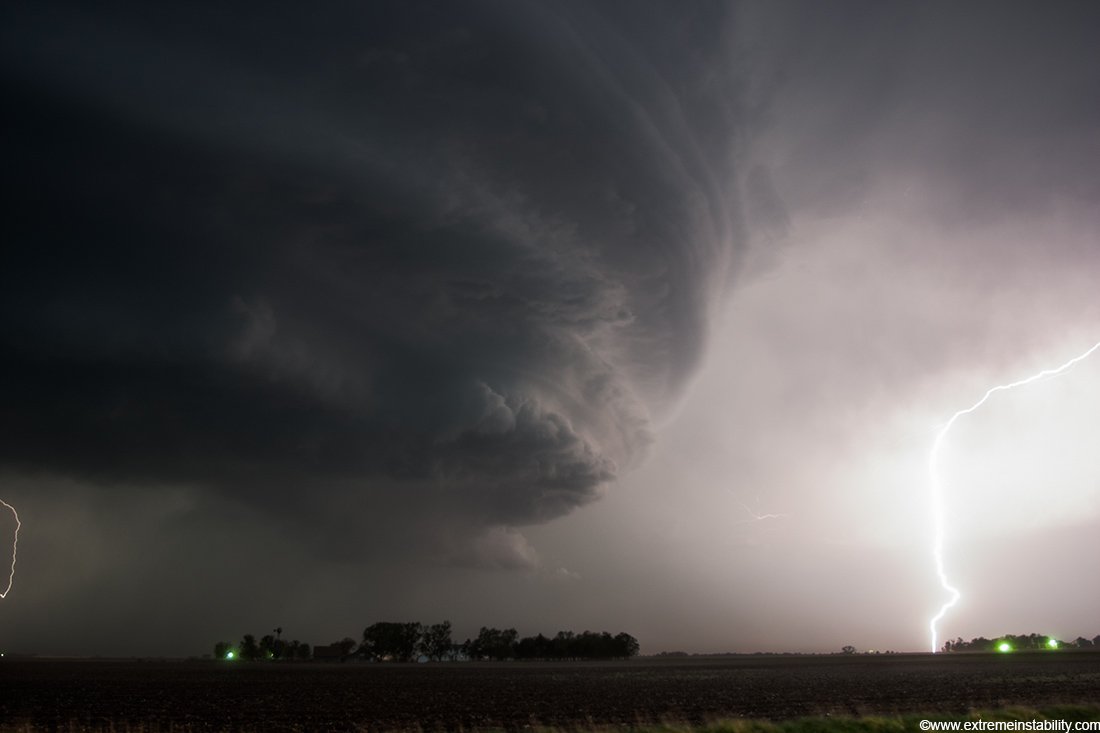 Now this exposure wasn't long at all. That is exactly what the storm structure was shaped like. The bolt blew out a bit, but had it been stopped down the structure wouldn't have been able to have been lit up and frozen like this. 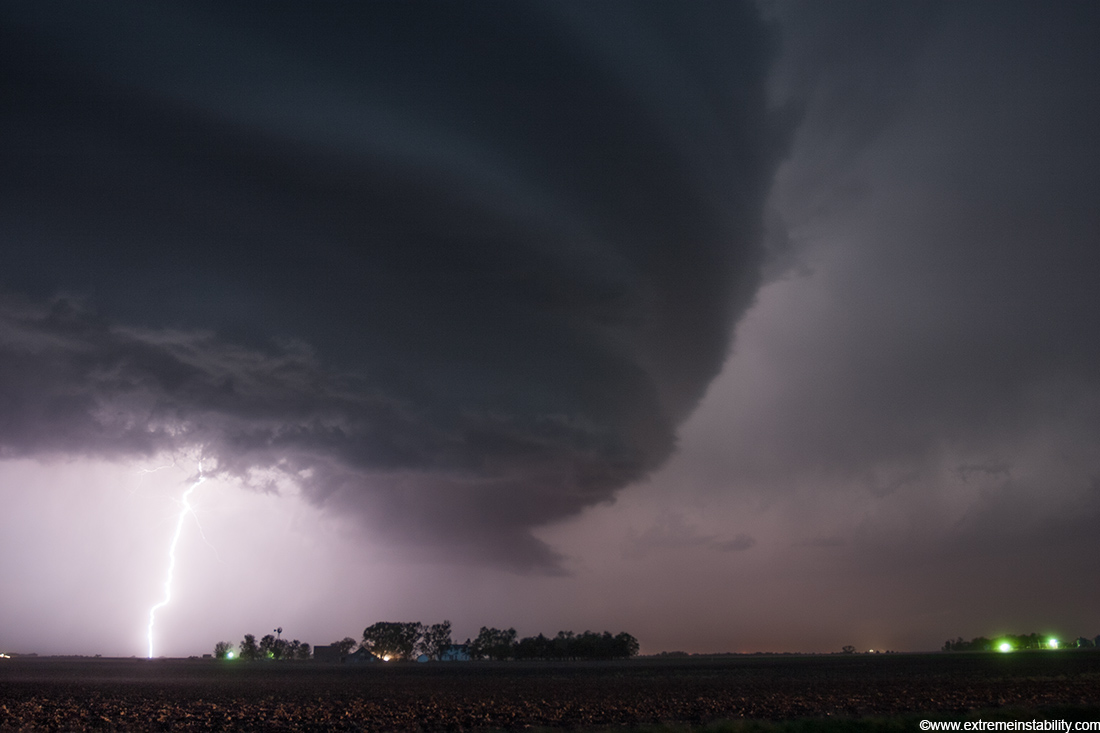 Heading into Omaha at the southern end of a developing bow/small curl. Randy was behind me somewhere. We got blasted really hard by greater than 60mph winds I would guess. It was tearing up the trees on the south side of the interstate. 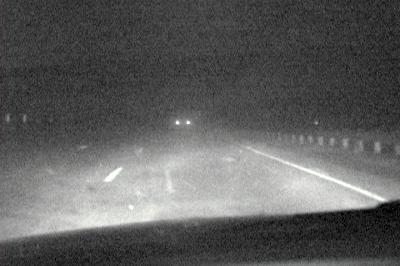 A bit furthern along and this tree branch comes flying from the other side of the interstate. If it came off a tree recently it was in the air a long ways. The left side here is up on a hill a bit. 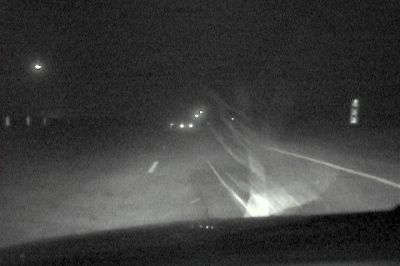