What a storm this turned into! Steve Peterson and I chased this storm from initiation near Spencer NE to Sioux City. I almost did not chase this day as it didn't look like a real great setup. There was nice directional shear but it wasn't very strong. Moisture was also not very deep. I must thank Steve for encouraging me to chase this day.

The following images are what one would miss, sitting out a close to home chase day because it didn't look worth the drive. 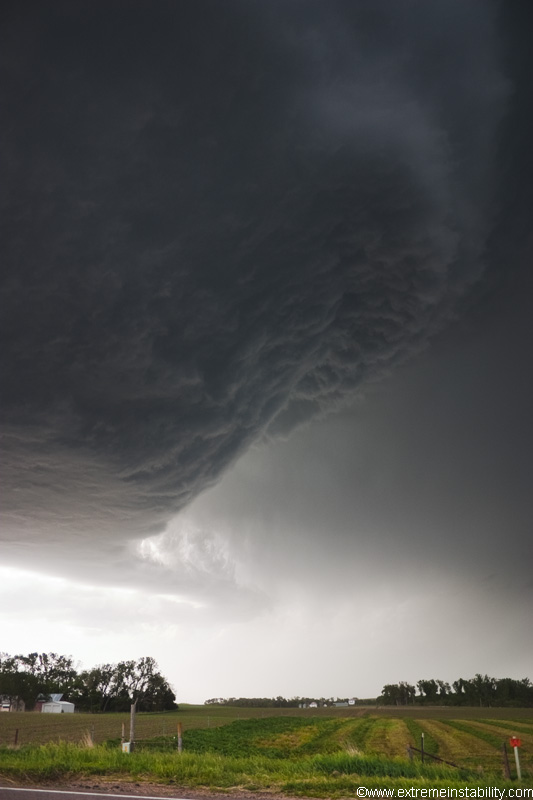 After some work it started to crank...and boy did it crank. It now had raging inflow. My eyes were quickly full of dirt. It had 40mph sustained inflow winds at this point. Steve had moved east a bit and phones me asking if I had done so yet, to see the structure. I said no I was still close to it. He suggests I move east and take a look at it. I moved east, saw this and got a whole lot more excited about the day's prospects. That is one of the coolest scenes I've seen chasing. I was about to see a lot more. 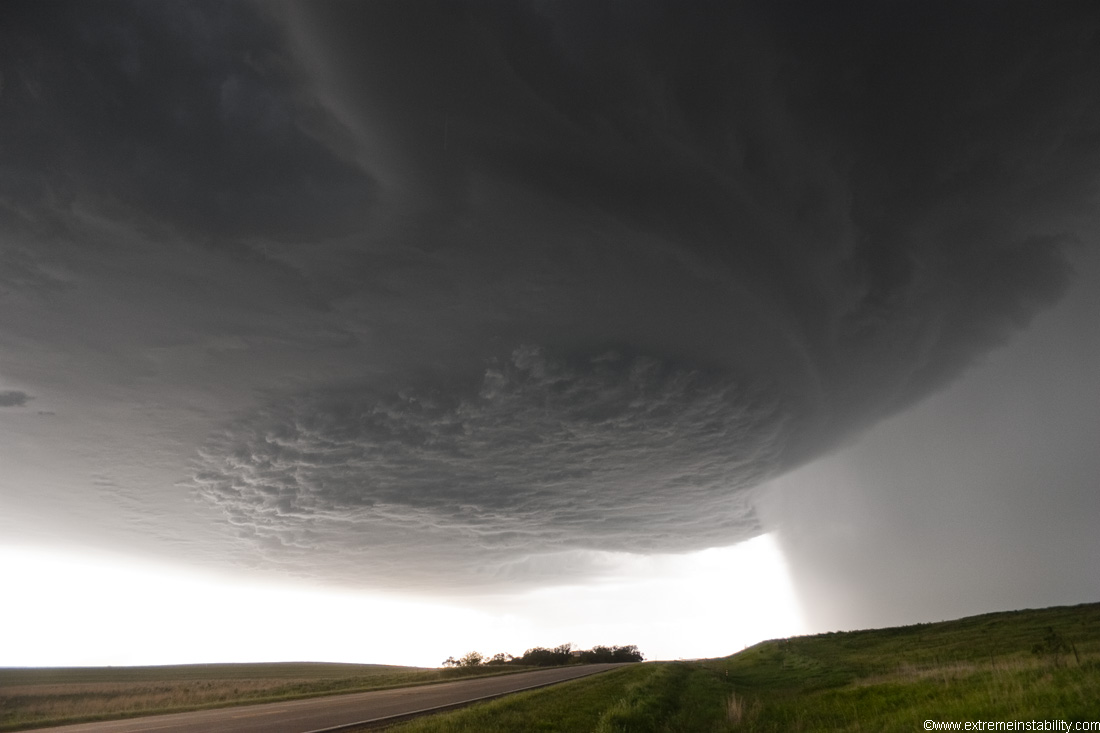 The storm was now sucking inflow very hard and going into simply crazy structures. I've never seen anything like this. Look how smooth the cloud base is away from the center. The speed of the inflow into that base had to be incredible. The powerlines were screaming overhead during this(from the wind through them). 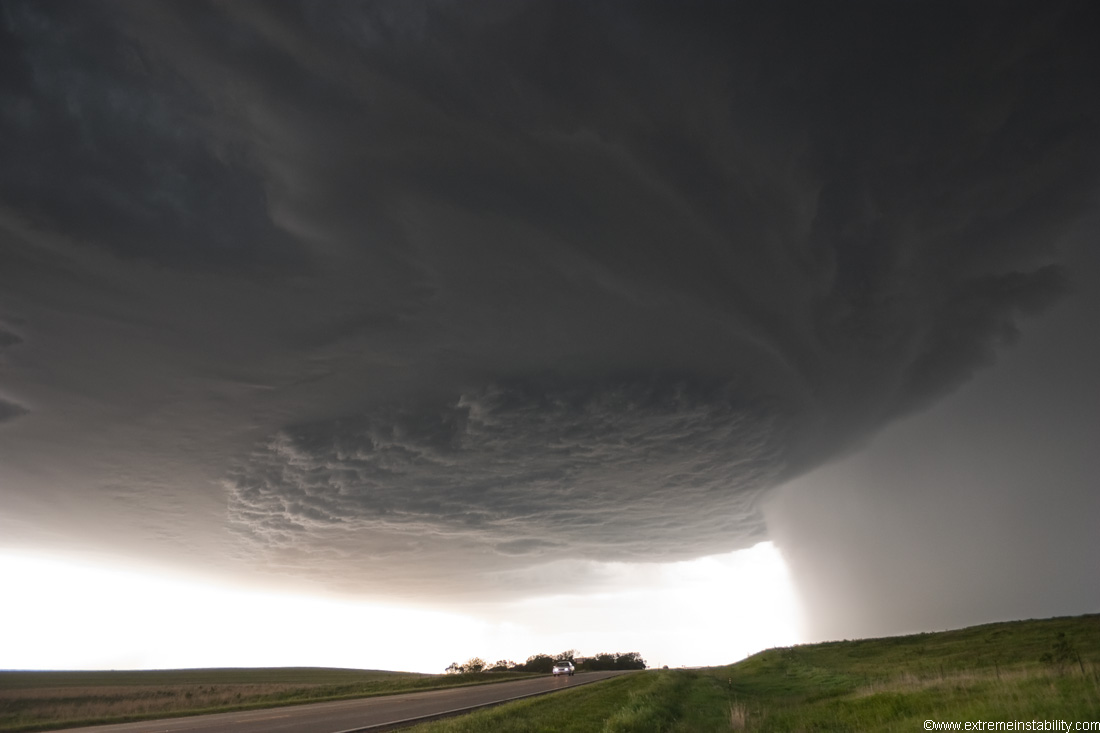 Check out the downdraft of rain! Look how sharp that cutoff is, on the south side. You could almost jump in and out of the core. I don't get how anyone could drive under this and not feel the need to pull over and watch. 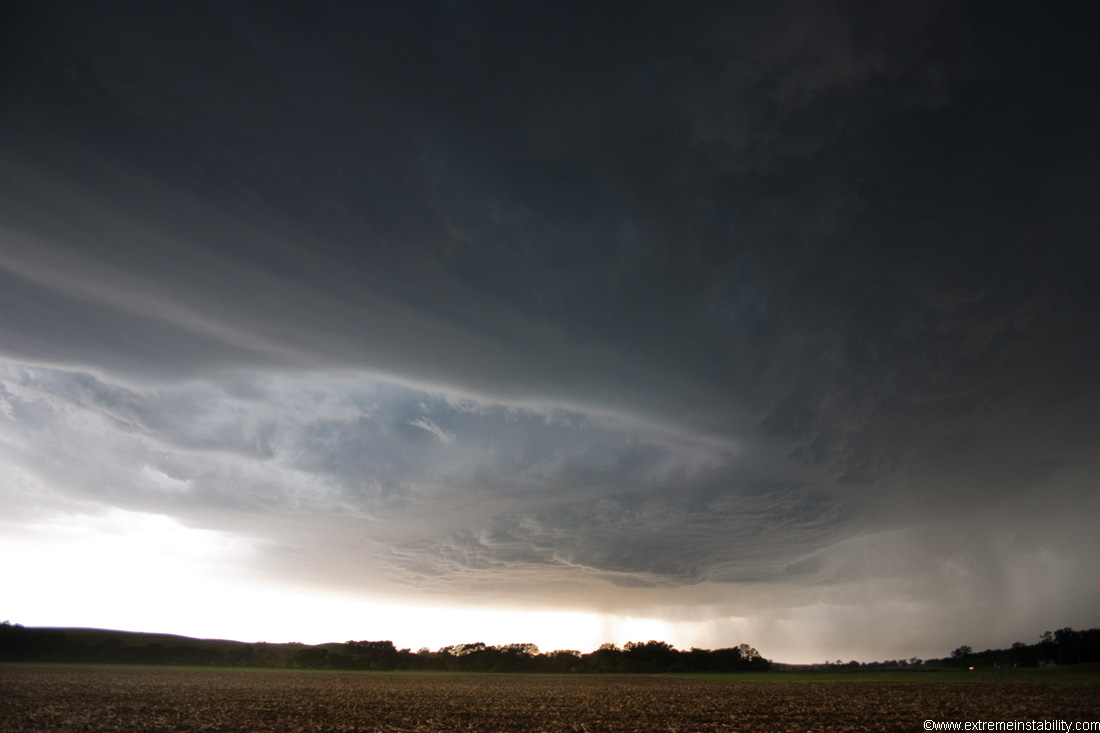 Since it was obviously a structure only storm(no real chance at tornadoing) we made sure to keep some distance east for the best viewing. This band/arm swings on around and feeds back west into the storm. The storm is now a big coil and managing a sculpted lowering. I thought it might briefly have a chance to produce as that lowering was wrapping way back in there. 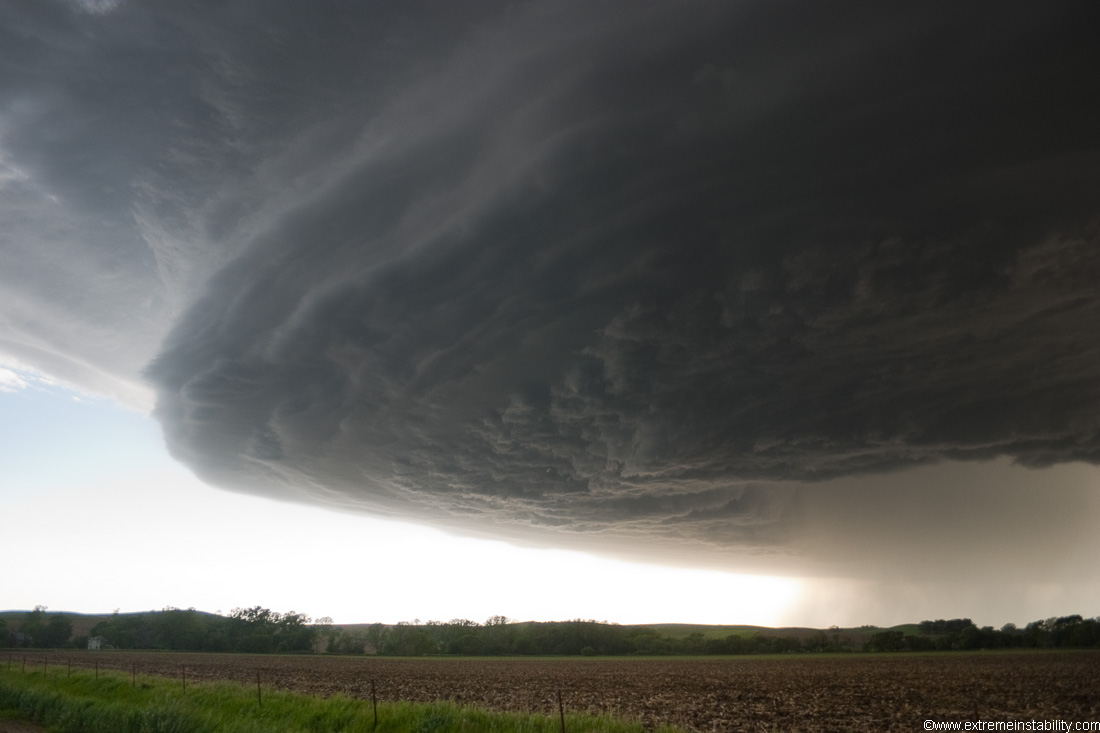 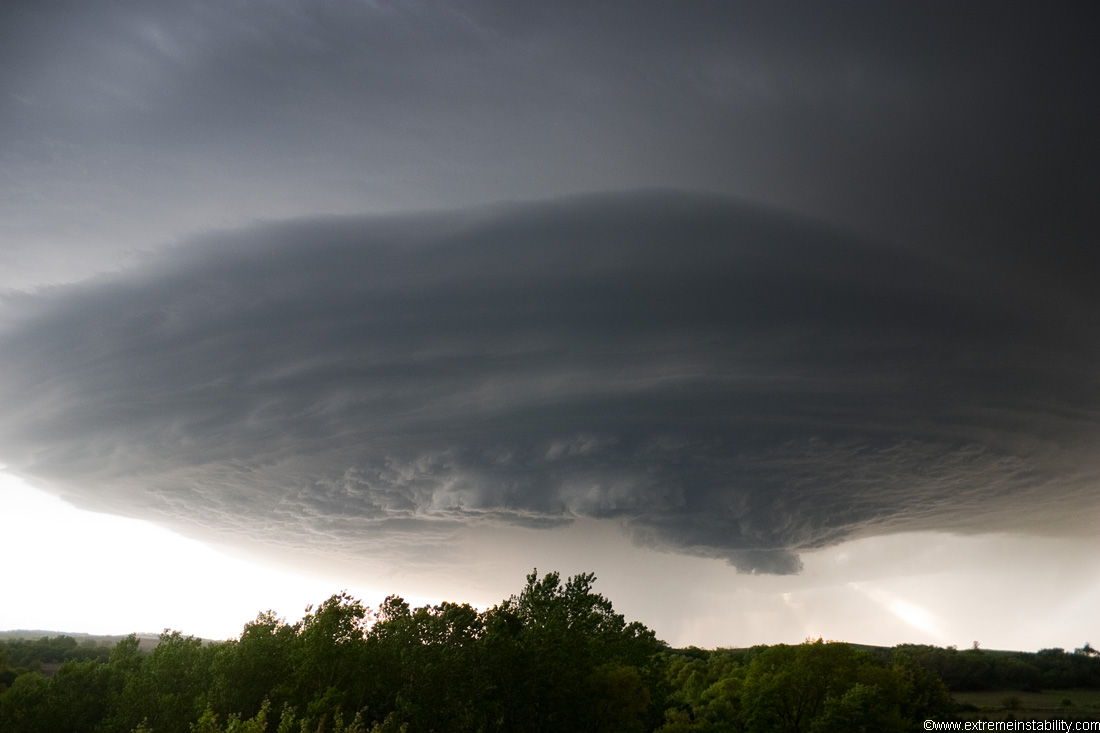 We jump east yet again. I forget where we are right here. 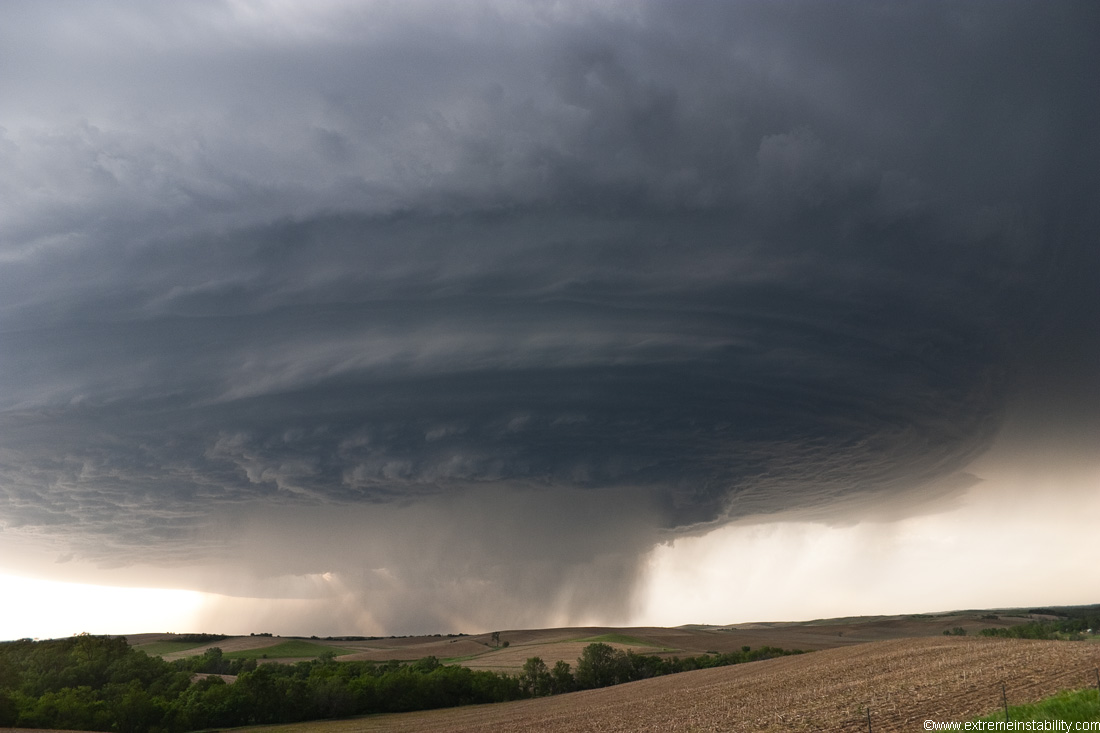 I think we move again and stop here. The winds were even stronger now, ripping west into the storm. 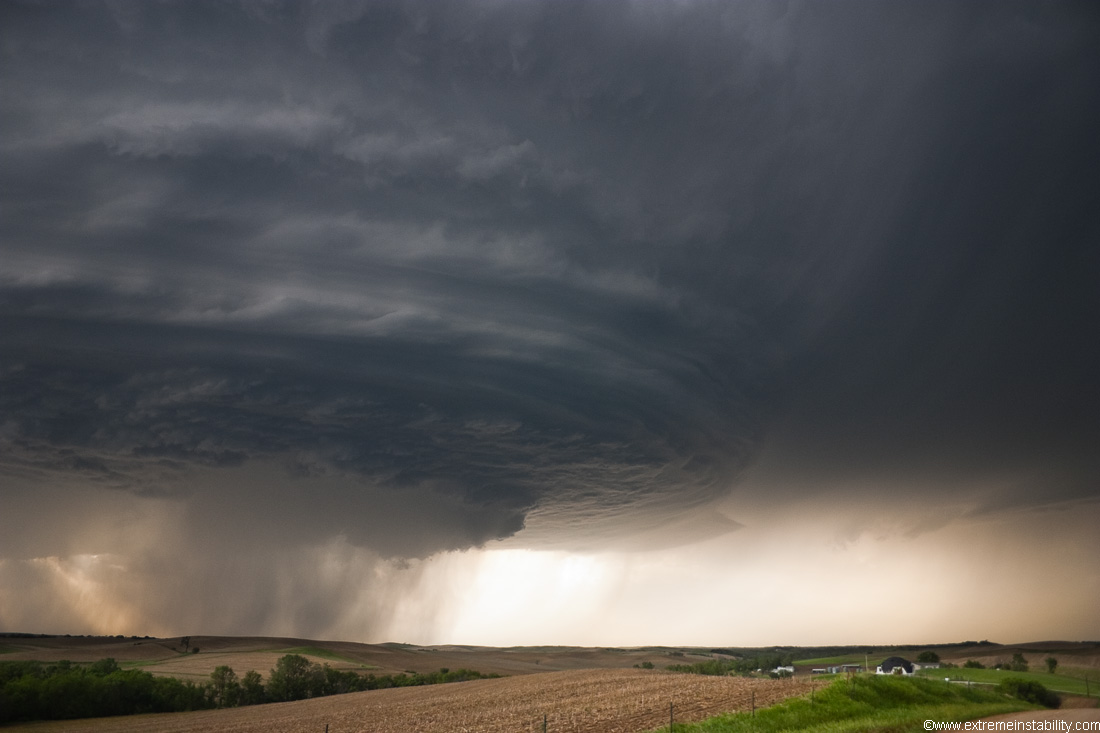 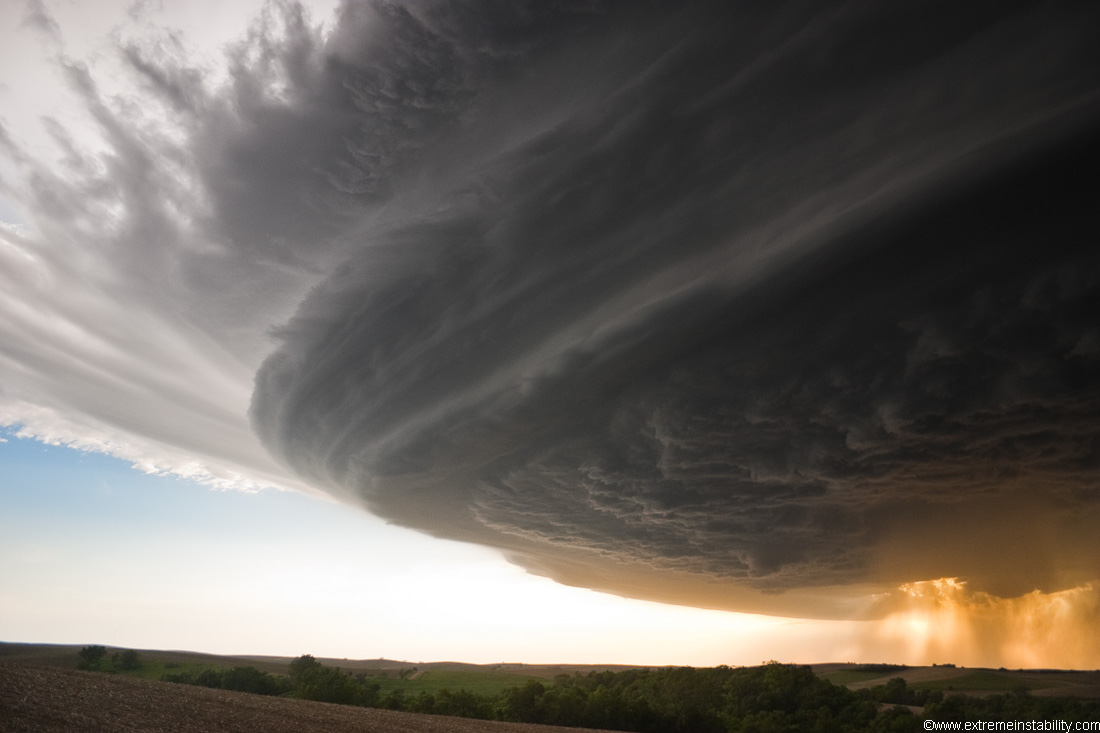 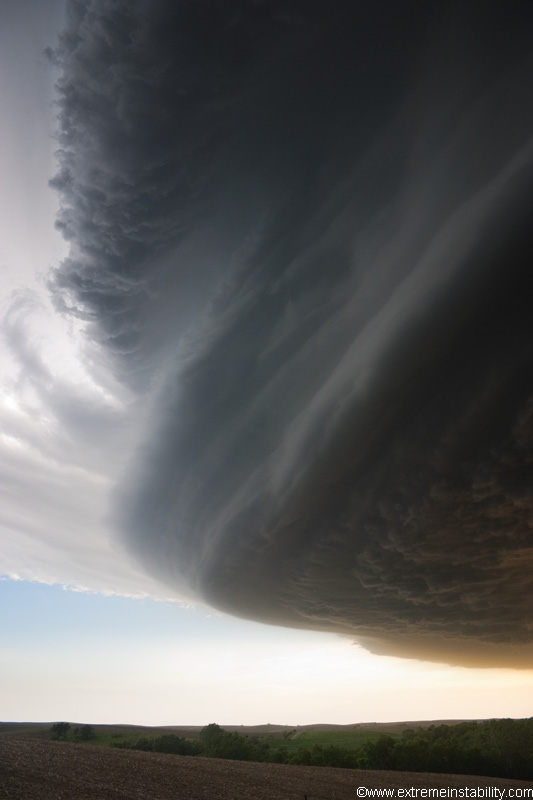 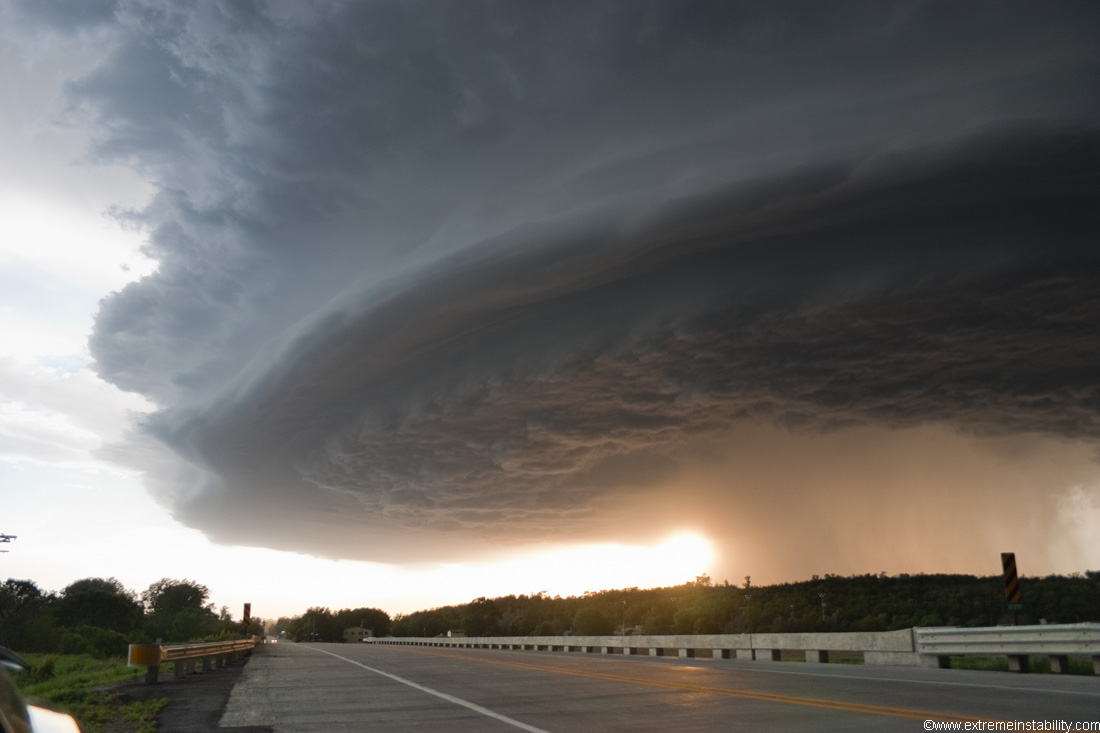 Looking west as the sun gets lower under the supercell. 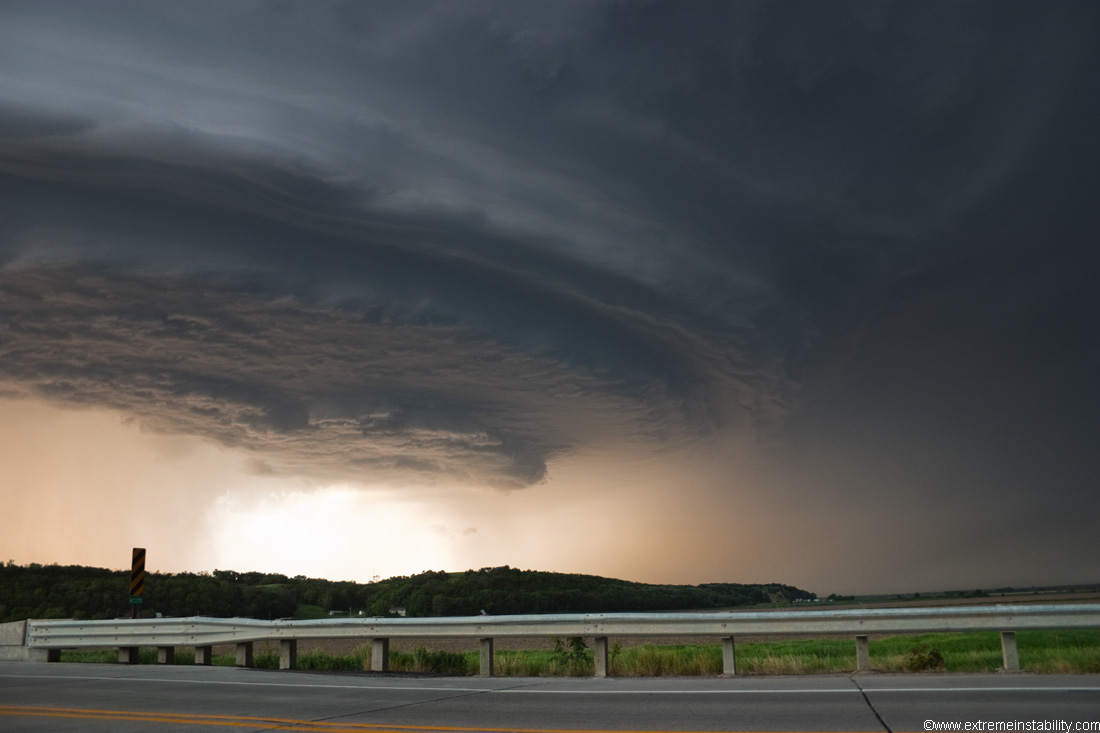 We are now getting closer to Sioux City and it keeps changing into something even more crazier than it was before. 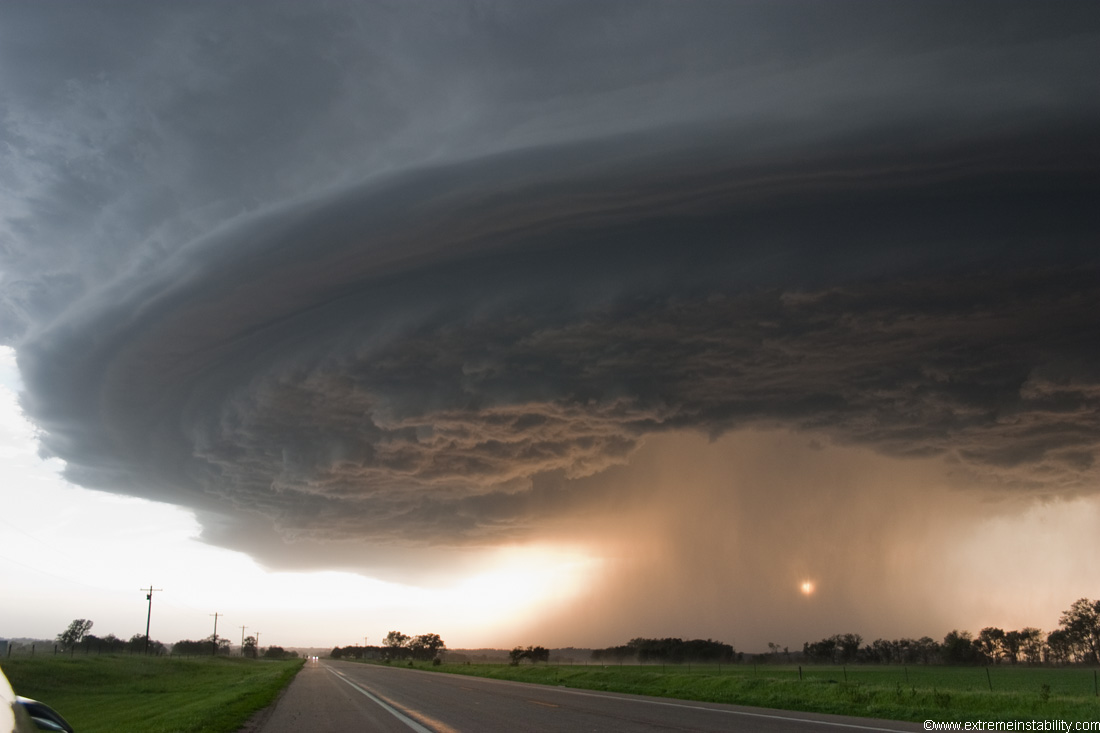 This was a permanent look to the thing, a huge donut. This is one of my favorite shots. 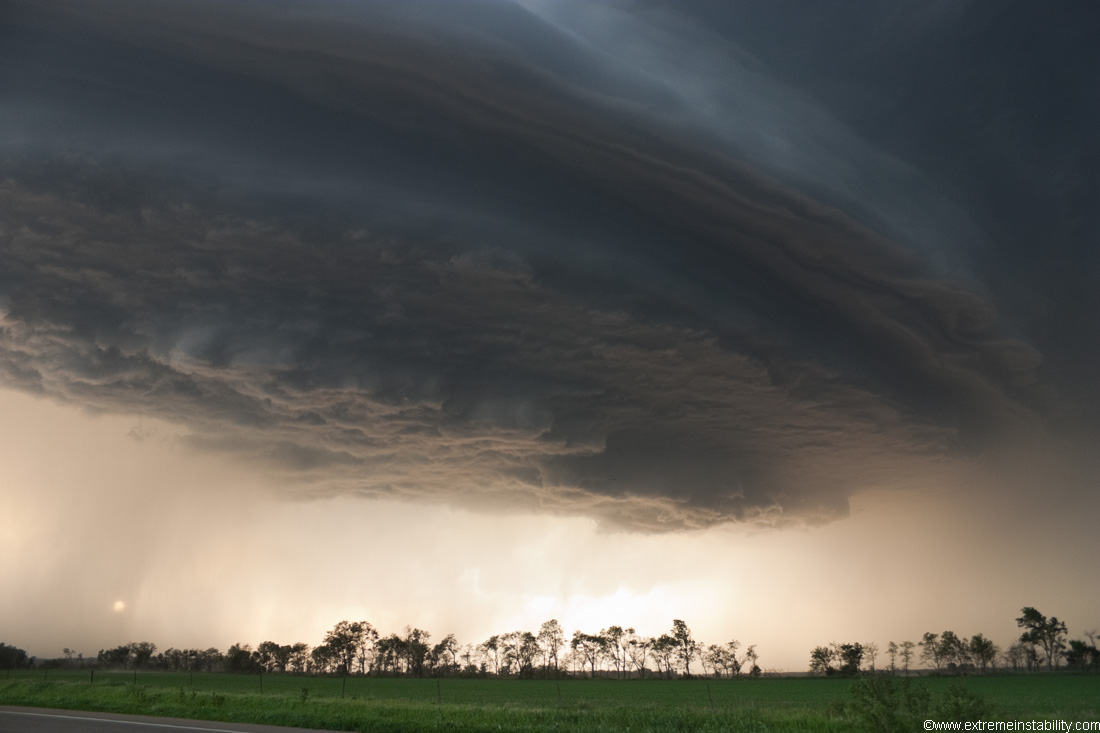 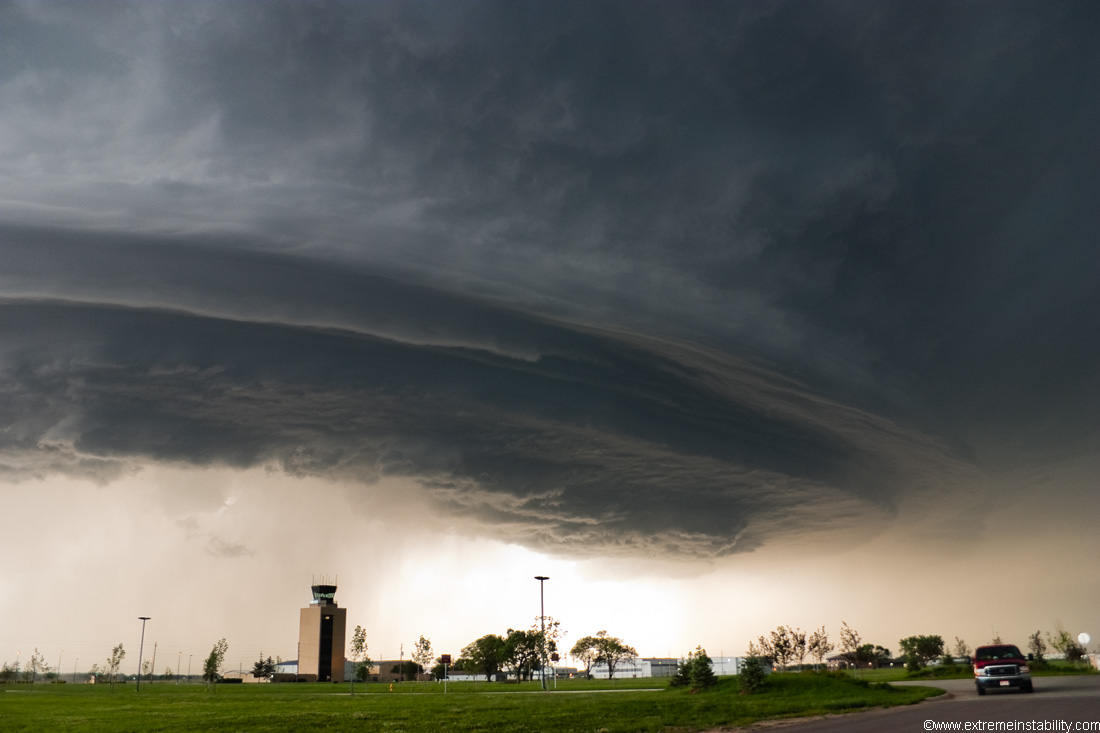 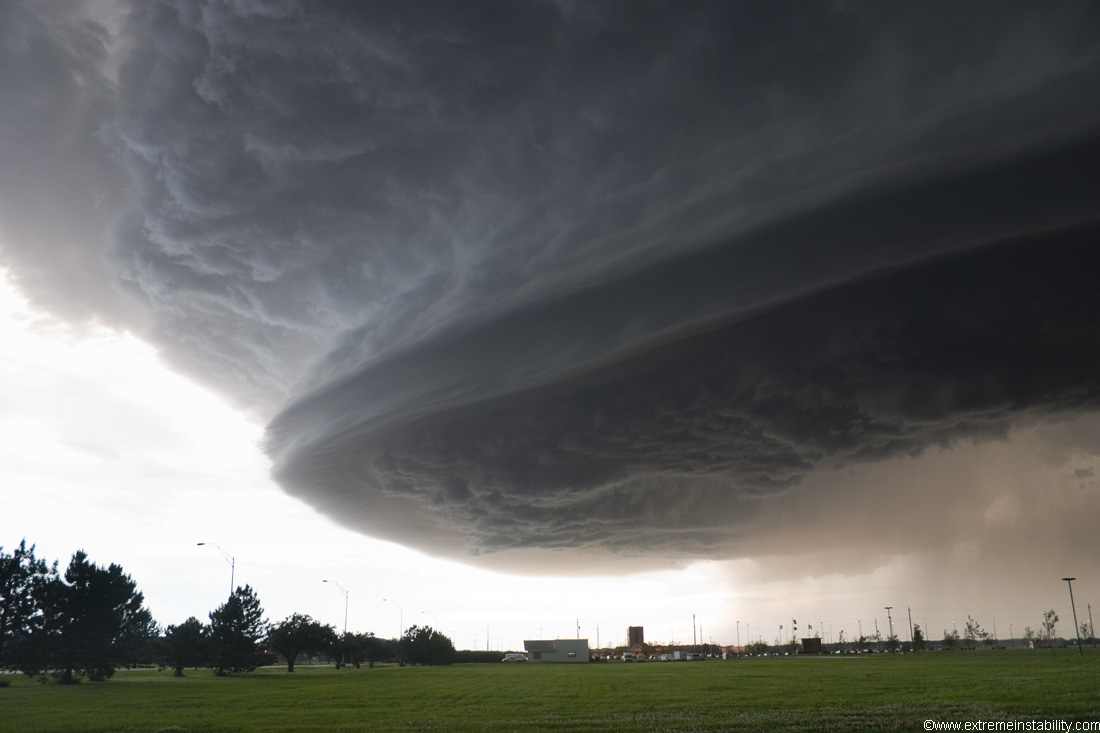 I wonder what the folks in Sioux City were thinking at this point. The sirens were blaring and this guy in a truck pulls up and says, "You better seek shelter." I replied, "It'll be ok." I should have driven west into it real quick to see what was happening with the wind and hail. 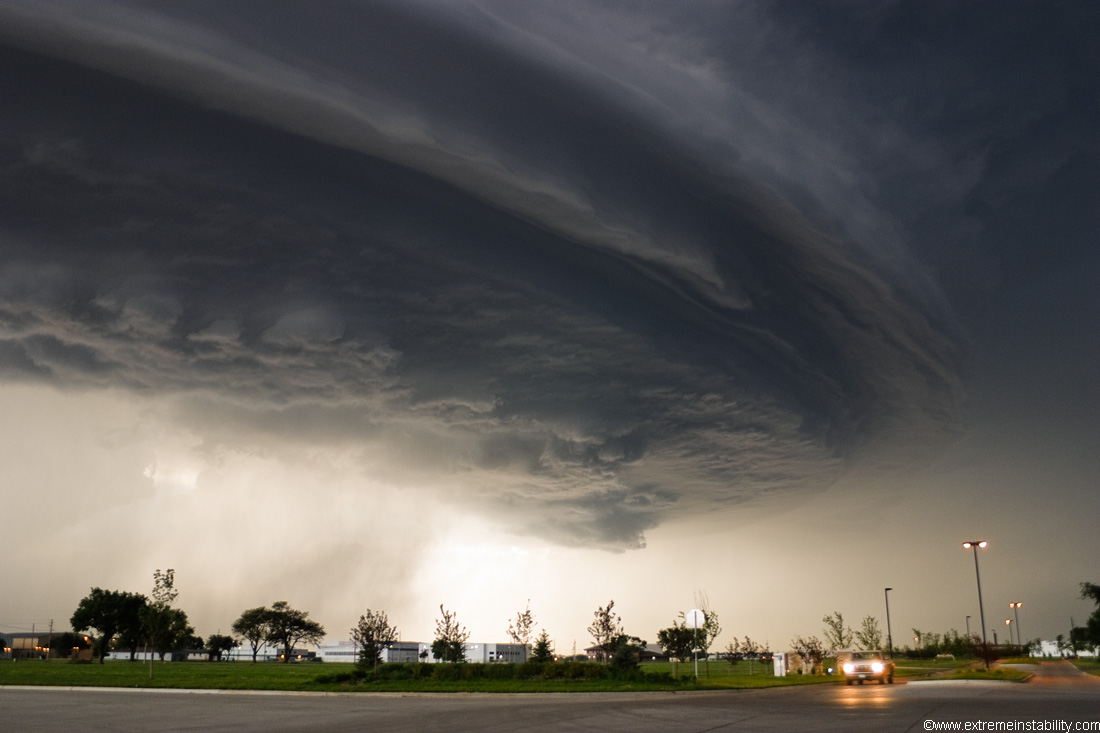 I jump ahead of it here and head down I-29 for home as it got increasingly linear and weaker. What a chase day.