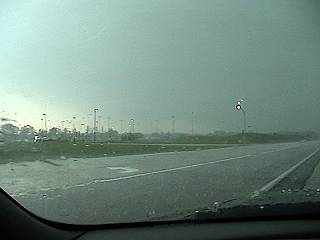 Looking sw at the storm I just punched east through, west of Moberly Missouri. I chased one storm nw earlier and let it go, then dropped south for this now weakening svr warned storm(it had been tor warned). I punched it, figuring it was an elevated hailer moving nne now. I then noticed it seemed to be moving more east than ne as I couldn't get out of the precip on my e-w highway. 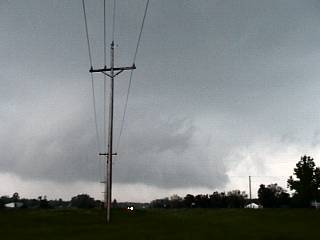 Wall cloud on east side of Moberly. 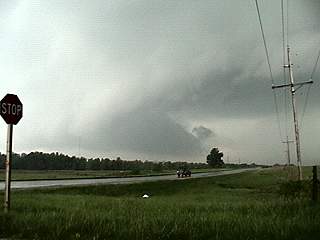 It really got cranking at this time. 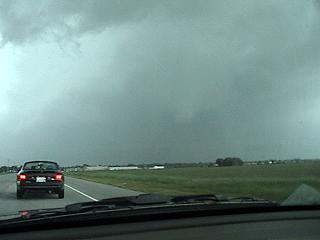 South of Monroe city here, after some hard driving. This storm looked like the storm I was on in OK April 19 this year. I never thought I'd catch it and was going to give up if I could not do it by this city. This lowering and meso did damage in the city just north of me. 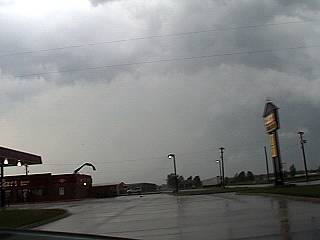 Notice the roof of the casey's store here on the left side of the image-part of the roof is coming off.

I'm not sure what was going on as I moved east through Monroe City, with the meso apparetnly to the ene now. It was very calm when I turned east into town. Then part way in I see tree tops slamming over and whipping around violently. Then I could see grass being lofted vertically at a good clip. As I went east it continued right outside my window. Whatever this was it causes that tin to peel off. 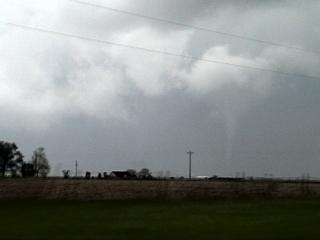 Not far out of the city this tornado touches down, very quickly. All the sudden it was there.

Below are some larger video captures. I thought I'd redo the whole account with them until I saw that I don't have all the video files on the pc. I'm not recapturing the stuff before here just to get them, so those will just have to remain small. 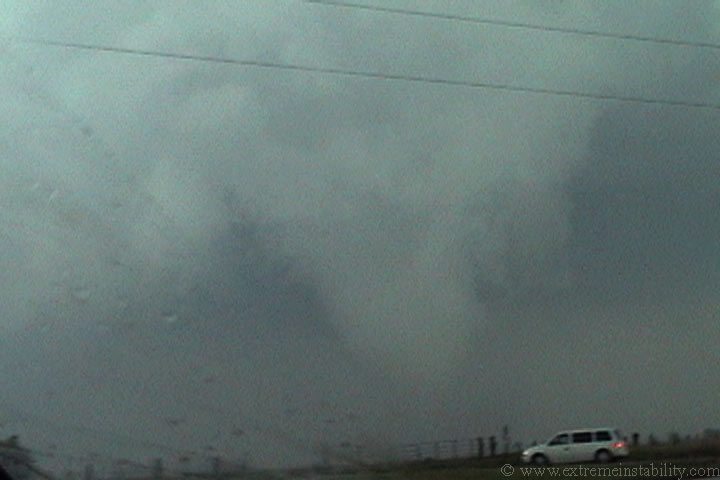 Turning east, looking north at the large torando. I believe that is a Tempest Tours van there. 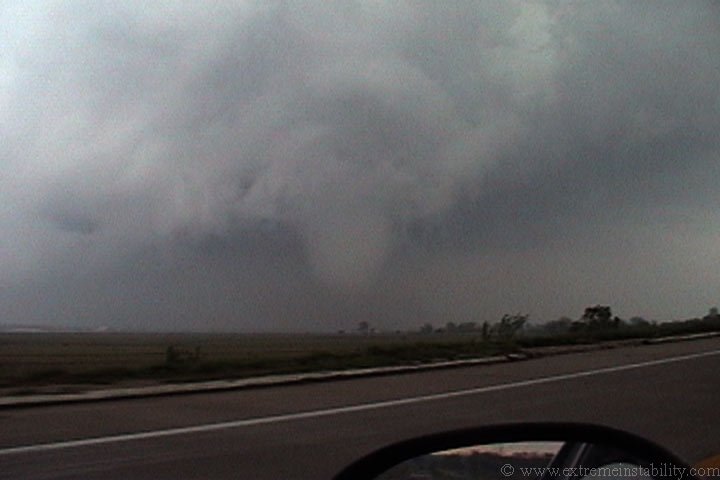 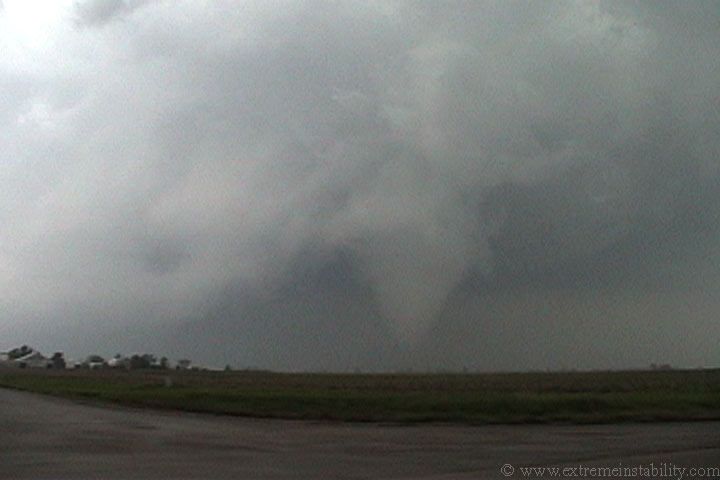 Tornado continues to move quickly off to the northeast. 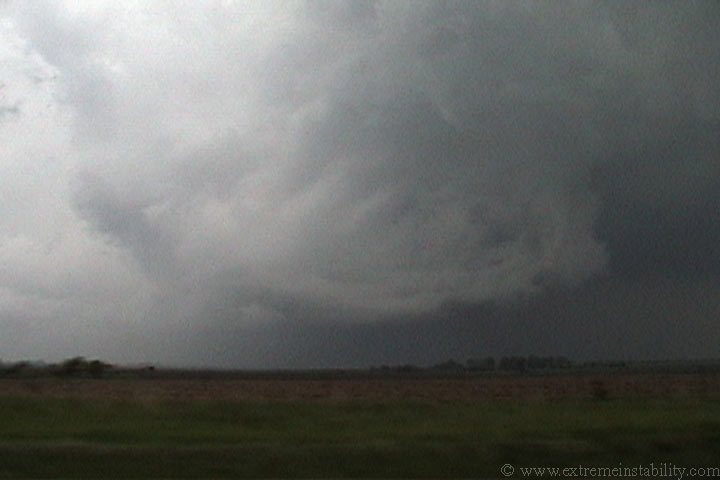 Very nice meso. I'm not sure there isn't a tube in there currently. If there isn't, I would still call this all one tornado as it's likely the same tornado cyclone. I was trying to gain some ground going east so I could race north and maybe get closer. 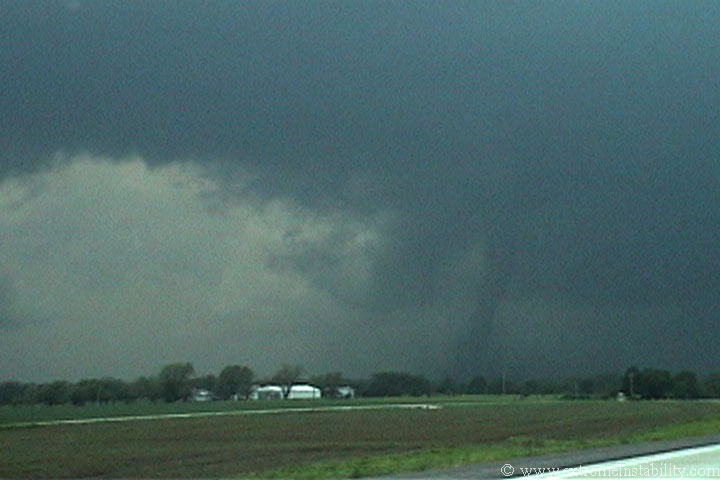 This is either a continuation of a hard to see tornado or a new one. Whatever happened I'd call it all one tornado. I'm now just west of Hannibal. 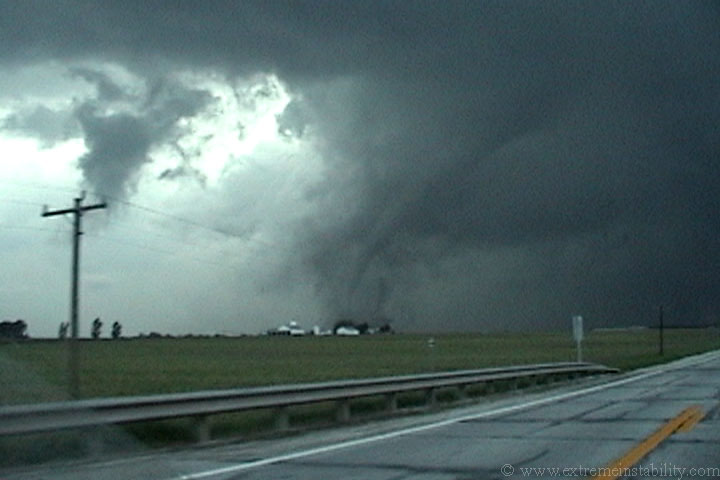 Fat rope continues while I race north. It passes just north of this farm. I'm heading north on the west side of Hannibal. 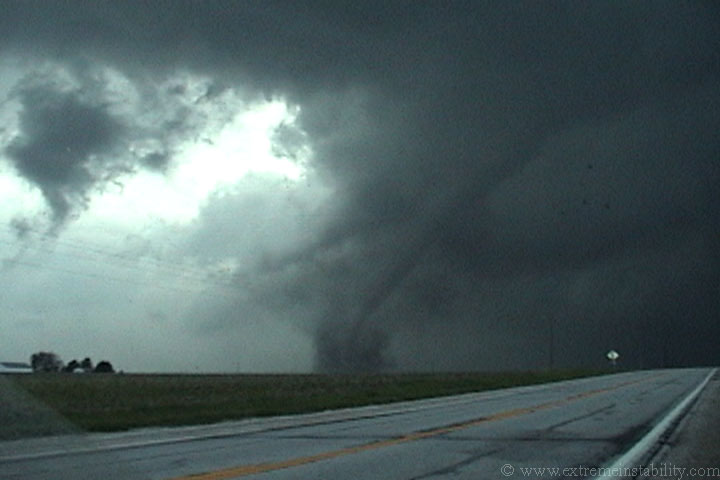 I pull over for a second and then quickly decide I could get closer. 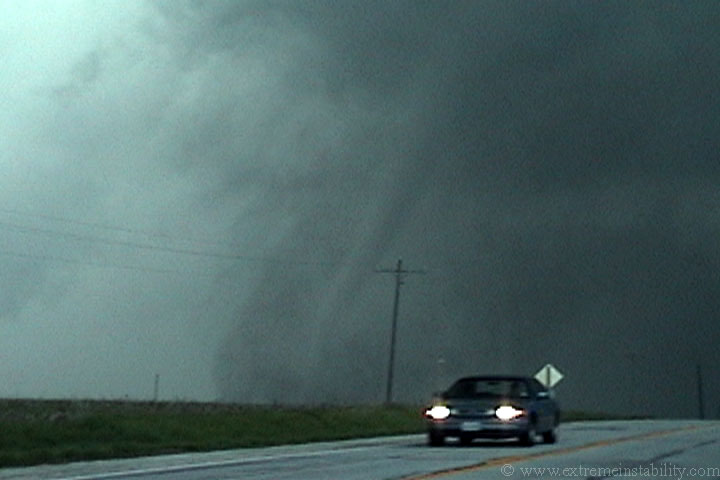 I bet this guy was surprised at his view to the west as he dropped south. 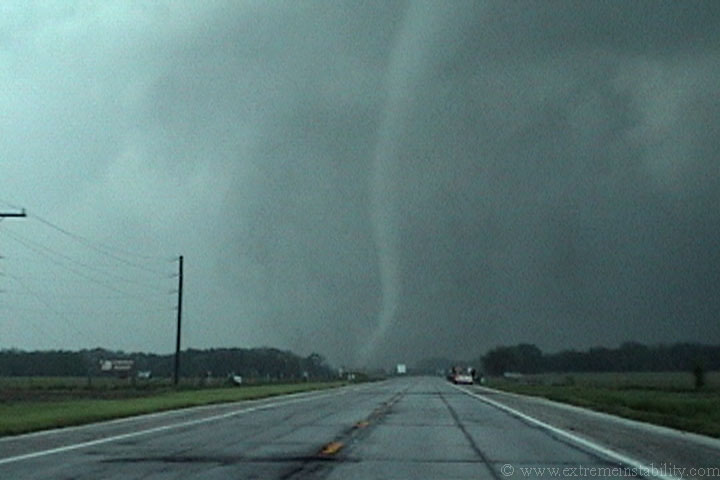 I wish I would have been right there when it crossed. 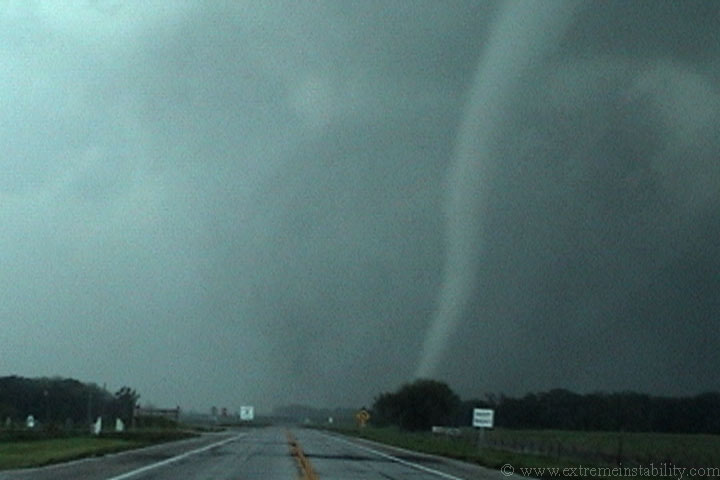 I punch the gas as I try to at least sneak up behind it and get close. 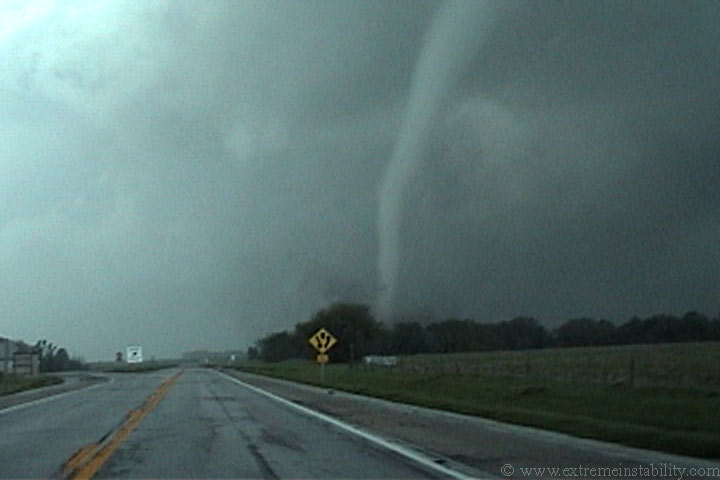 Tearing up the trees. It seemed to really slow up the second it entered that line of trees. 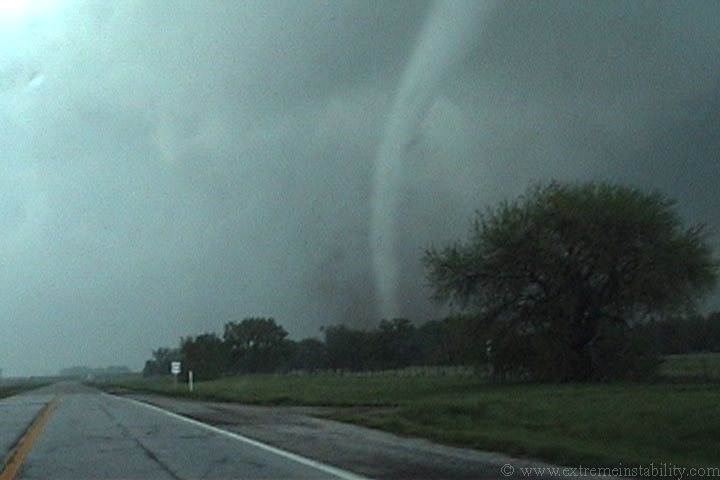 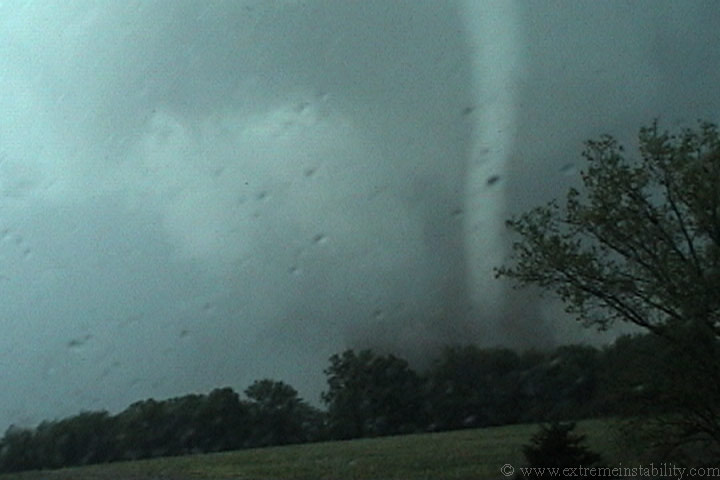 This is very close...perhaps 1/8 to 1/4 mile away now. I've never seen anything like this. It was simply amazing to watch. It was a bit unnerving for a moment, as it seemed to come to a complete stop. 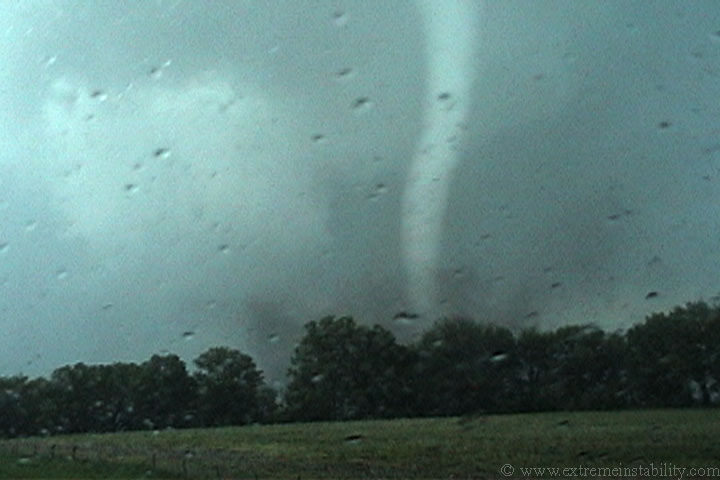 I really wish I was able to take some stills. I couldn't decide while trying to keep up with it and just made sure I kept the vid running. Had I had a camera mount in my car this would not have been an issue.

After my brief stop next to it, I continued on with the highway turning east now. It abruptly dissipates in the field next to me, just south of the road. It was so cool driving east after this. 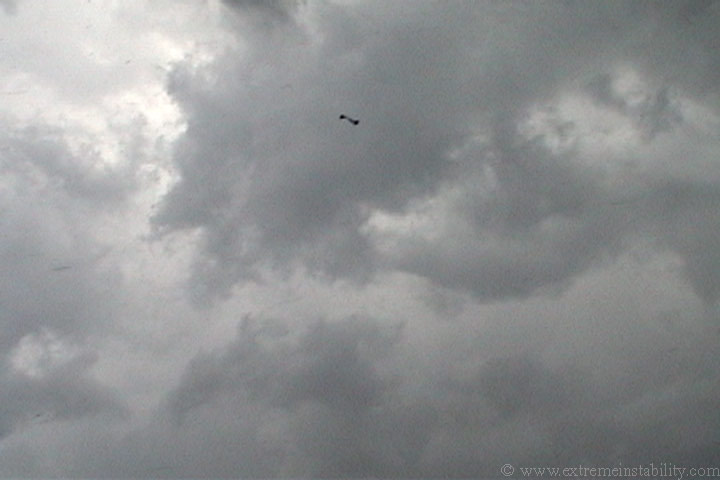 It was like a gigantic lawn mower bag was released overhead. Lots and lots of grass falling sw from the ne. This object I believe was a small tree. It was flipping end over end as it fell back to Earth. 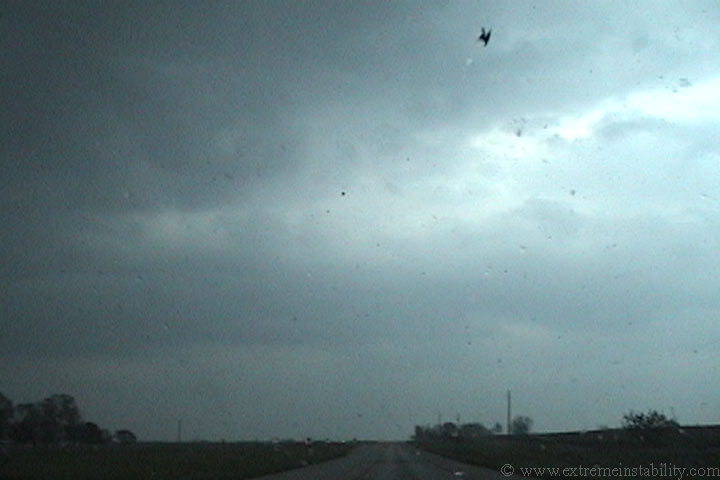 Not sure what this one was. Some portion of a tree most likely.